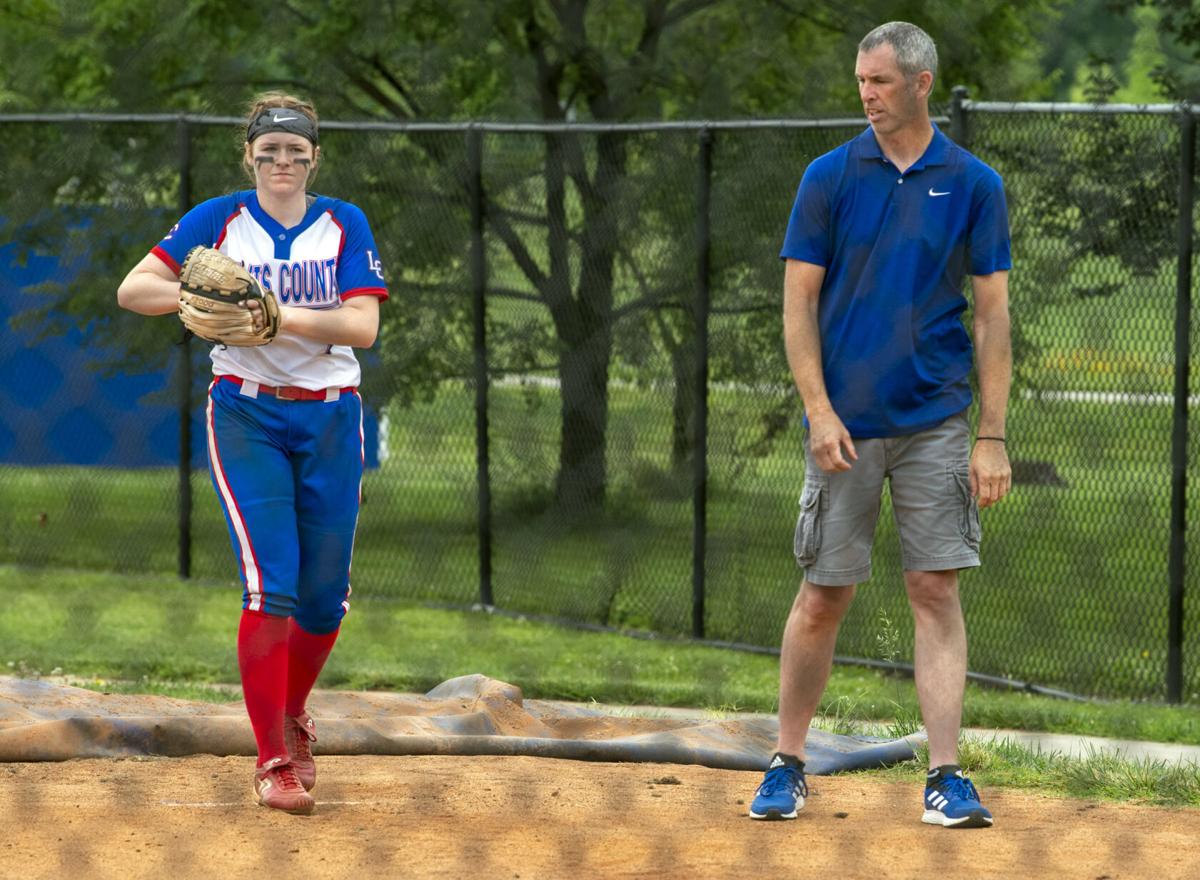 Lewis County ace Emily Cole warms up under the eye of her father, team pitching coach Marty Cole Saturday, June 19, 2021 before the state softball tournament semifinal against Daviess County in Lexington, Ky. Photo by John Flavell / For The Daily Independent 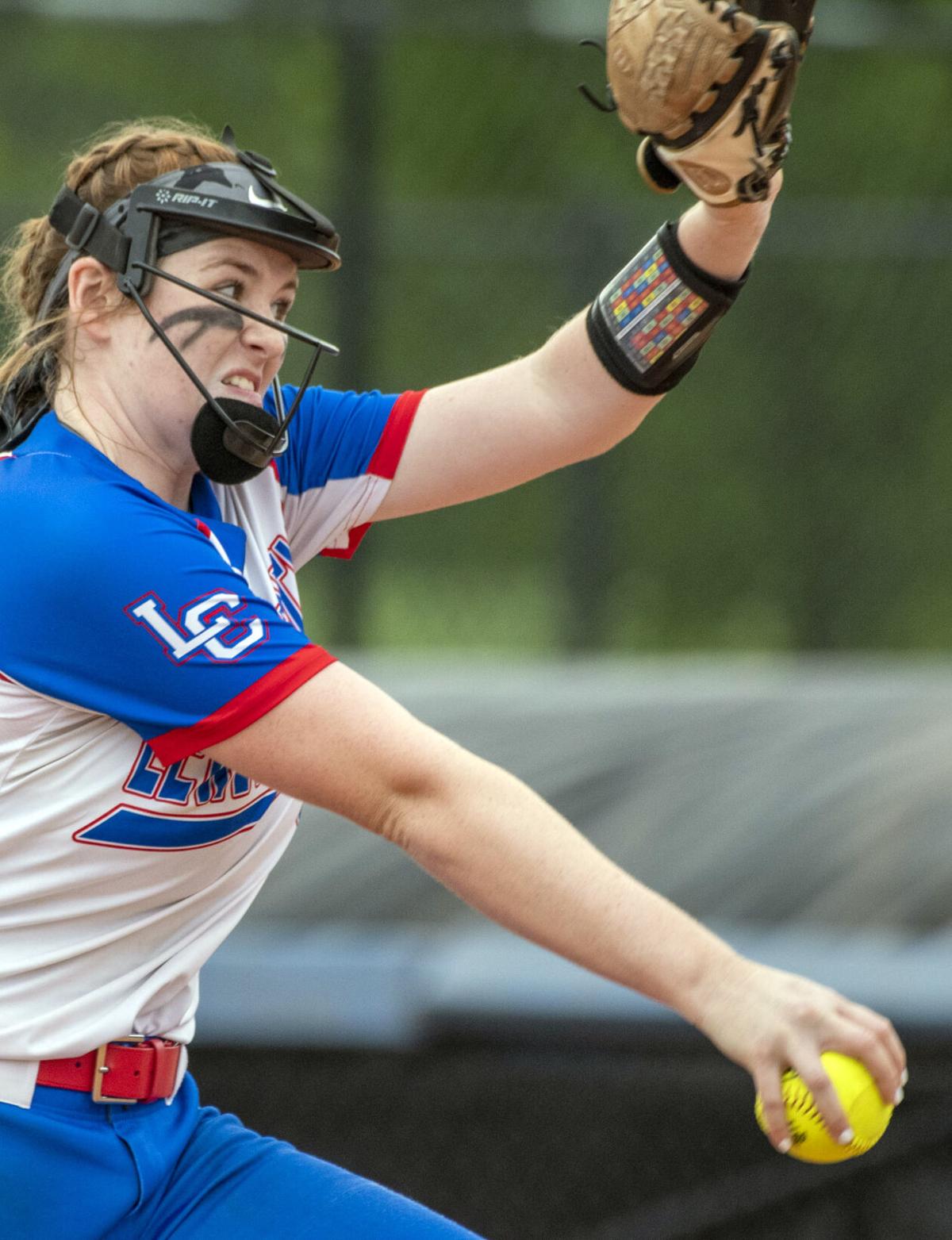 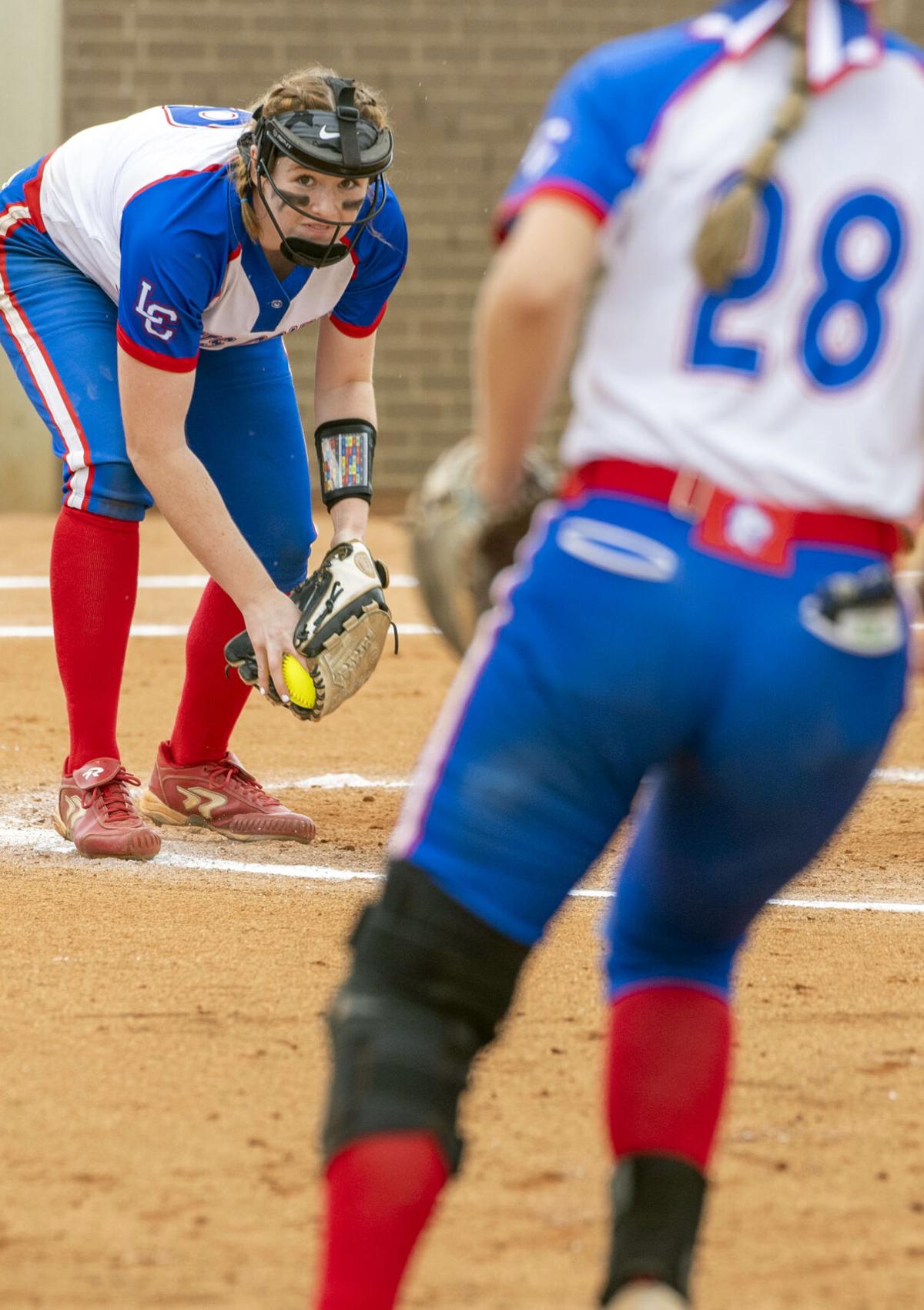 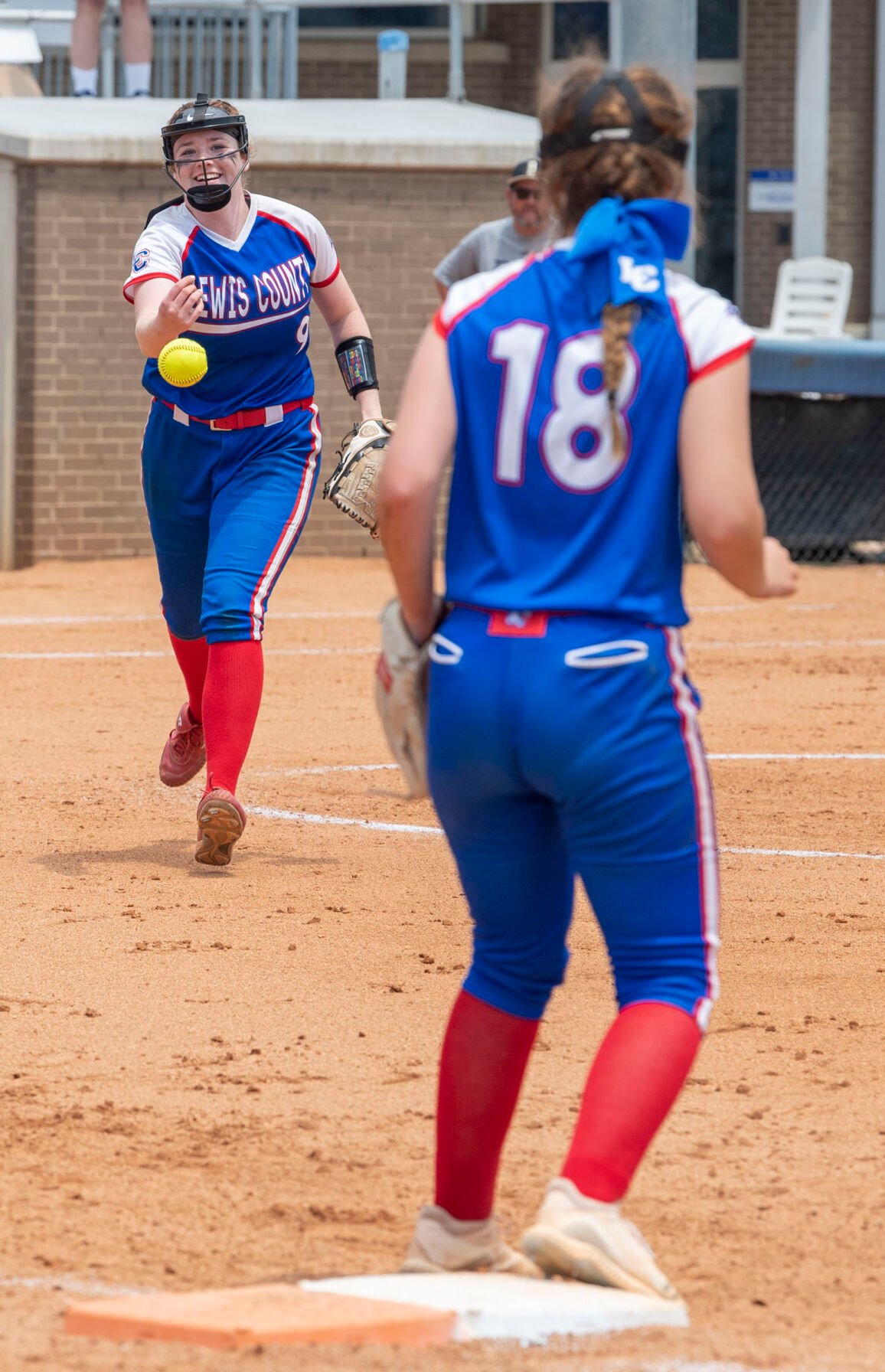 Lewis County’s Emily Cole smiles as she tosses the ball for the last out Friday, June 18, 2021, to beat Boyle County in the state tournament quartfinal in Lexington, Ky. Photo by John Flavell / For The Daily Independent

Lewis County ace Emily Cole warms up under the eye of her father, team pitching coach Marty Cole Saturday, June 19, 2021 before the state softball tournament semifinal against Daviess County in Lexington, Ky. Photo by John Flavell / For The Daily Independent

Lewis County’s Emily Cole smiles as she tosses the ball for the last out Friday, June 18, 2021, to beat Boyle County in the state tournament quartfinal in Lexington, Ky. Photo by John Flavell / For The Daily Independent

LEXINGTON Lewis County's sensational run was in trouble, and its ace was laboring. So Joe Hampton went to check on her.

The Lady Lions trailed Daviess County, 6-0, in the top of the fourth inning of the state tournament semifinals on Saturday afternoon, and Emily Cole had a hitch in her get-along. She said later she'd stepped in a hole and twisted her knee wrong, but Hampton wasn't sure she hadn't grabbed her arm instead.

"She's done that before and scared us all to death," Lewis County's coach said, so he approached the circle at John Cropp Stadium.

Patrons and media couldn't hear Hampton's question, but they could see Cole's emphatic response -- shaking her head to say, no, she didn't need to come out of the game.

That didn't turn into a turning point to keep the Lady Lions' dream of a state title alive. They fell, 6-2, to the Lady Panthers, victimized by one really bad inning at a time when they couldn't afford one.

But it did allow Lewis County's super sophomore to finish what she started.

And it does look for all the world like she's just getting started.

Cole can't even officially be contacted by NCAA-member coaches until Sept. 1, according to a 2018 rule to prevent unreasonably early scholarship offers. That didn't stop her from posting the second-lowest earned-run average in the state as a 10th-grader.

Cole's strikeout of Daviess County's cleanup hitter to strand two runners in scoring position and end the top of the fourth inning was her first of eight straight Lady Panthers retired down the stretch. That wasn't enough to win Saturday, but it gave a statewide audience another glimpse of what 16th Region batters and coaches already know.

"That's a hidden gem right there for any (college coaches) out there," Boyle County coach Brian Deem said Friday, moments after Cole three-hit his Lady Rebels and homered to boot in the state quarterfinals. "That kid can play, she can hit, she can throw and she can spin it."

Daviess County coach John Biggs watched film of Cole pitching in that game before his team took the field Saturday.

"When you watch it on the iPad, she threw a lot harder and she was better than what I saw," Biggs said. "She's a really nice pitcher."

That's solid. It was better a day earlier. Cole yielded one earned run on three hits, with six punchouts and no free passes in Lewis County's eye-opening 6-2 win over Boyle County in the state quarterfinals.

"I was impressed on how she was moving the ball," Deem said. "She did a really good job of hitting all four quadrants (of the strike zone). When you work all four quadrants like Emily does, it makes hitting very difficult. Our plan was to look for a certain pitch, and when we weren't able to get it or if we didn't go after it and fell behind (in the count), guess what? Now we're playing her game."

No one had much success playing Cole's game this season, which was only magnified when she went down May 10 with an injury to her pitching hand from a liner hit right back at her.

A 14-4 loss that day to Greenup County was the second of the Lady Lions' five straight setbacks down the stretch. It took all the coaching acumen Hampton -- a former longtime boys basketball boss in his first season skippering softball -- could muster to keep Lewis County's morale afloat.

"It was bad," Hampton said. "It was hard -- not just on the team, outside the team. There was a lot of division. It got really ugly at one point, a lot of finger-pointing. Adversity shows a lot of true colors.

"But luckily, within the team, we withstood that. Once (Cole) got back and we got a little confidence, everything changed."

Hampton said that wasn't a mirage.

"She backs up her stats," Hampton said. "I feel like sometimes stats that get sent in get inflated. I think you got to see her (in the state tournament) and realize that these are not inflated stats and she backs up all the hype behind her."

Lewis County isn't quite a one-woman show. Kayla Sullivan joined her classmate on the All-Tournament Team after supplying a critical three-run triple against Boyle County. Sullivan, Sarah Paige Weddington and Summer Egbert each hit .340 or higher on the season. Alanna Puente and Madison Liles drove in 30 and 26 runs, respectively.

And if you ask Cole if she felt like this week was a coming-out party on the state stage, that's where she focuses -- on the team aspect.

"We're always the underdog, so we really wanted to make a name for ourselves and our community," Cole said. "This is the furthest we've ever been in our sport, so I think this is really great for us."

But it isn't the furthest Lewis County hopes to go. The Lady Lions, who before two weeks ago had never even played in a region tournament final and began play two seasons ago having dropped 61 of their previous 64 games in the ultra-tight 63rd District, have tasted success at the state's highest level.

"Oh, it's definitely to get to that championship," Cole said, grinning -- and she didn't mean in the district or the region. "The bar will always be high for us."

This week, it deserved to be set there. Hampton even got a mischievous crack in at Boyle County's expense that would have seemed so absurd it wasn't even of the same language just a few years ago.

"We thought about saving (Cole) for the finals," Hampton said, grinning slyly, an allusion to Lewis County's perception that the Lady Rebels overlooked the Lady Lions by not starting their ace in the quarterfinals -- and paid for it with a loss. "But we decided to go ahead and go with her today."

If Lewis County and Cole stay on their current trajectory, such bold aspirations might not be hypothetical.