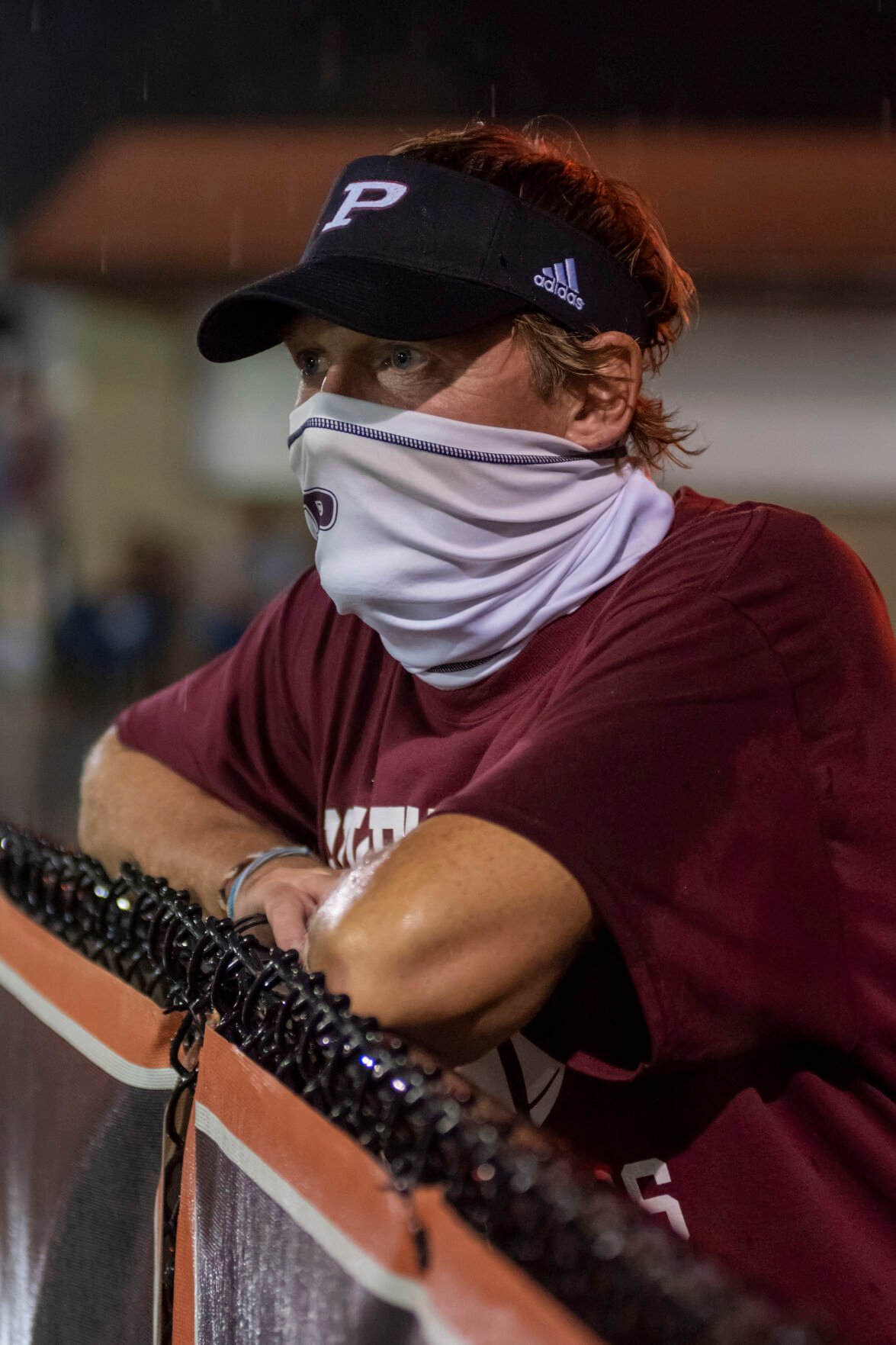 Former Raceland and current Pikeville volleyball coach Jason Clark looks on as the two schools played on the gridiron at Ram Stadium on Saturday night. 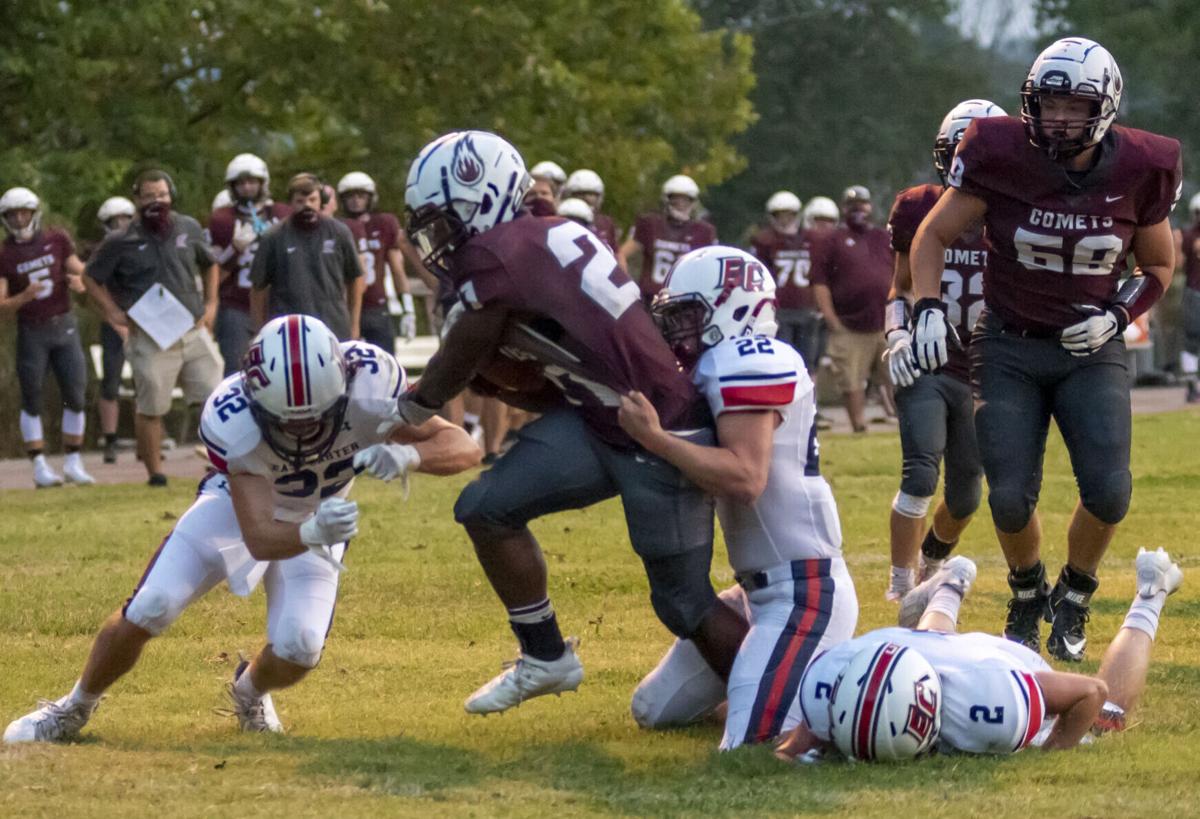 Former Raceland and current Pikeville volleyball coach Jason Clark looks on as the two schools played on the gridiron at Ram Stadium on Saturday night.

Not long ago, Jason Clark saw red when he saw maroon, to the degree he wore the same undershirt under his coaching gear for good luck every time his Raceland volleyball team played Ashland.

On Saturday night at Ram Stadium, Clark was dressed head to toe in maroon -- from his visor to his Nikes -- save his khaki shorts.

The former Lady Rams volleyball, basketball and softball coach was back at his alma mater as Pikeville came calling on Raceland. Clark is the father of Panthers starting center Brady Clark.

"I always thought my kid would be on the other side," Clark said, meaning dressed in the home black and orange. "It's exciting to see him play against his old JFL teammates. I taught kids on both sides of the ball. Had all those (Raceland) kids in elementary school, and I've had all these (Pikeville) kids now in high school. It's a neat situation."

Clark, a 1994 Raceland graduate, coached the volleyball Lady Rams to the beginning of a bona fide dynasty en route to 16th Region titles in 2013 and '14. He resigned the next summer, resurfaced at Floyd Central in 2017 and is now in his third year at Pikeville teaching high school physical education and coaching volleyball.

The gregarious Clark said there were “probably not more than 10 people in this stadium that don't know me in some way, shape or form.” As if to prove his point, a couple sauntered up to say hello right after Clark finished an interview during a break in the game for inclement weather.

Clark isn’t alone in his wardrobe changes. His parents, wife and in-laws, all with deep Raceland roots, sported maroon as well in support of Brady, who started the Panthers’ 12-6 win over Raceland in Pikeville last year in place of an injured starter but is in his first season as a full-time first-teamer.

Pikeville coach Chris McNamee said he anticipates the offensive line will be the defending Class A state champions’ strength this season. With Clark in the middle, the Panthers’ O-line paved the way for 362 yards of offense on Saturday night in a 28-7 victory.

• Ashland will finally be on the field on Friday night, although it will only be against itself.

The Tomcats’ season opener against Greenup County scheduled for last Friday was canceled due to a positive COVID-19 test. Ashland was off this week, so the Tomcats announced plans Friday night to move their Oct. 30 meeting with Spring Valley up to this Saturday afternoon.

But a day after that decision was made, Spring Valley said the Timberwolves couldn’t play in Boyd County this week. Due to its rate of COVID-19 cases, if Boyd County were in the Mountain State, West Virginia’s state education department would not allow competition here. “Was out of our hands,” Spring Valley coach Brad Dingess said.

The Timberwolves and Tomcats do still plan to meet at Putnam Stadium on the original date, Dingess confirmed.

So the Tomcats will stage an intrasquad scrimmage open to the public on Friday at 7:30 p.m., said Ashland athletic director Jim Conway. General admission tickets will be on sale for $2 at Ashland Blazer on Friday from 9 a.m.-3:30 p.m.No tickets will be sold at the gate.

Attendees must complete COVID-19 screening sheets and temperatures will be checked, Conway said. Social distancing measures and mask-wearing inside the stadium will be enforced.

• Paintsville did what it does under eighth-year coach Joe Chirico on Friday night -- beat teams from larger schools.

Paintsville rallied from a 14-0 deficit to East Jessamine after one quarter by outscoring the Jaguars 39-10 over the final three frames.

In so doing, the Tigers improved to 25-2 against Kentucky schools from larger classifications under Chirico. That includes two wins in as many years over East Jessamine, which was the top seed in Class 5A, District 7 last fall.

“Our kids just worked, didn't get excited, didn't get outside of normal processes,” Chirico said. “We just know that sometimes you get down and you gotta battle back. They scored 14; we can score 14. ... They don't panic.”

The Tigers rolled up 457 yards of total offense in Nicholasville led by Jake Hyden, who threw for two touchdowns and ran for two more.

• Leetavious Cline continued a tradition of being at his best with the Barrel on the line on Friday.

The West Carter senior rushed for 152 yards and three touchdowns despite sitting after the first series of the third quarter in the Comets’ 43-0 win over East Carter.

This is Cline’s line in four games against the Raiders: 523 rushing yards, eight touchdown runs, two pick-sixes, a punt return for a TD, five solo tackles and 15 assisted stops. And three victories.

“Leetavious has been a standout in all four Battle for the Barrel games he’s participated in,” West Carter coach Daniel Barker said. “From his big interception in the fourth quarter as a freshman to this past week’s game, he has put his stamp on this series.”

Four: Leetavious Cline (West Carter). The Comets senior ran for 152 yards and three touchdowns in just over a half of play against East Carter.

Logan Staten (Boyd County). The Lions’ senior QB ran for 150 yards and four touchdowns on just six carries, threw for another score and intercepted a pass.

You are Looking Live

We have also begun a new venture entitled “Eleventh Hour,” a brief live video wrap-up of local football action on The Daily Independent’s Facebook page at or around 11 p.m. every Friday night.

We think both are worth checking out!