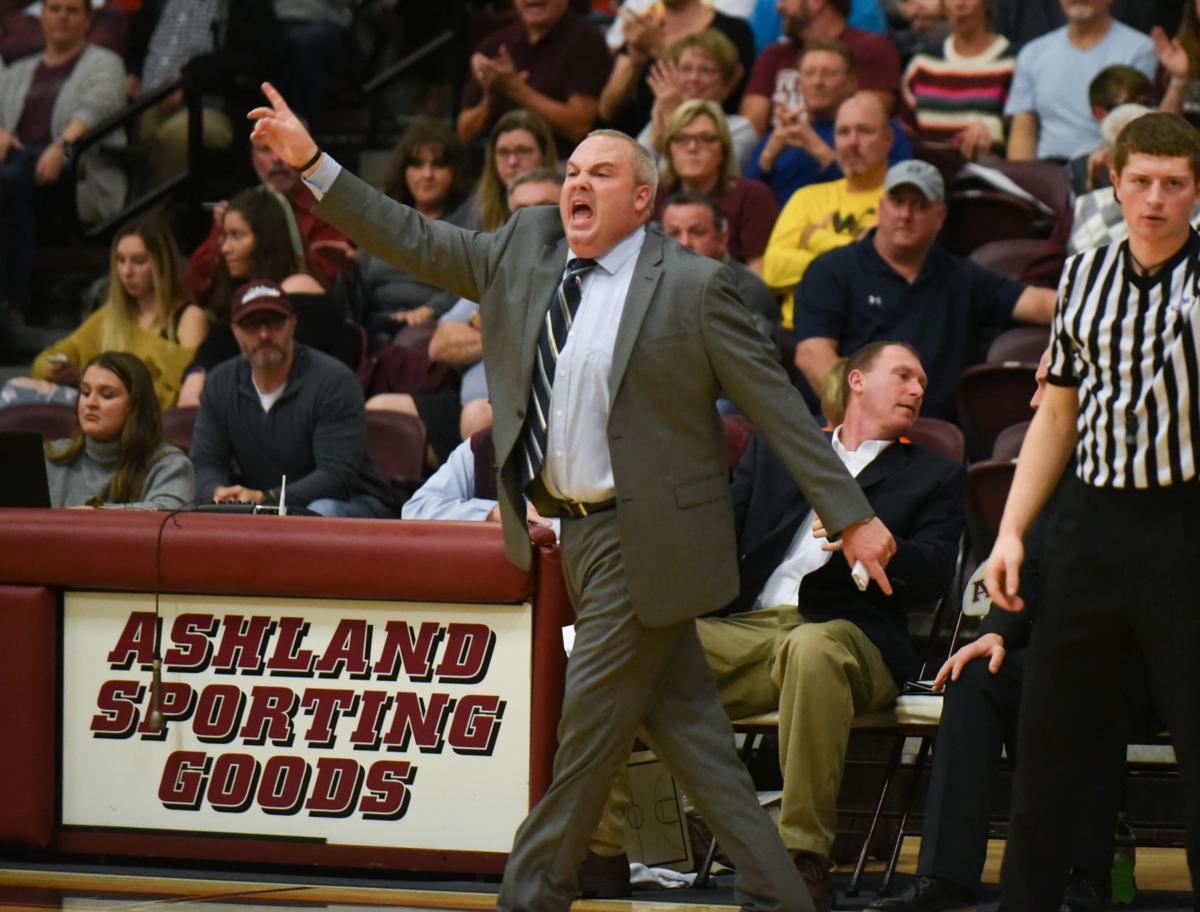 Ashland head coach, Jason Mays shouts instruction to his team against Butler on Sunday evening during the 2019 AIT championship game. MARTY CONLEY/ FOR THE DAILY INDEPENDENT 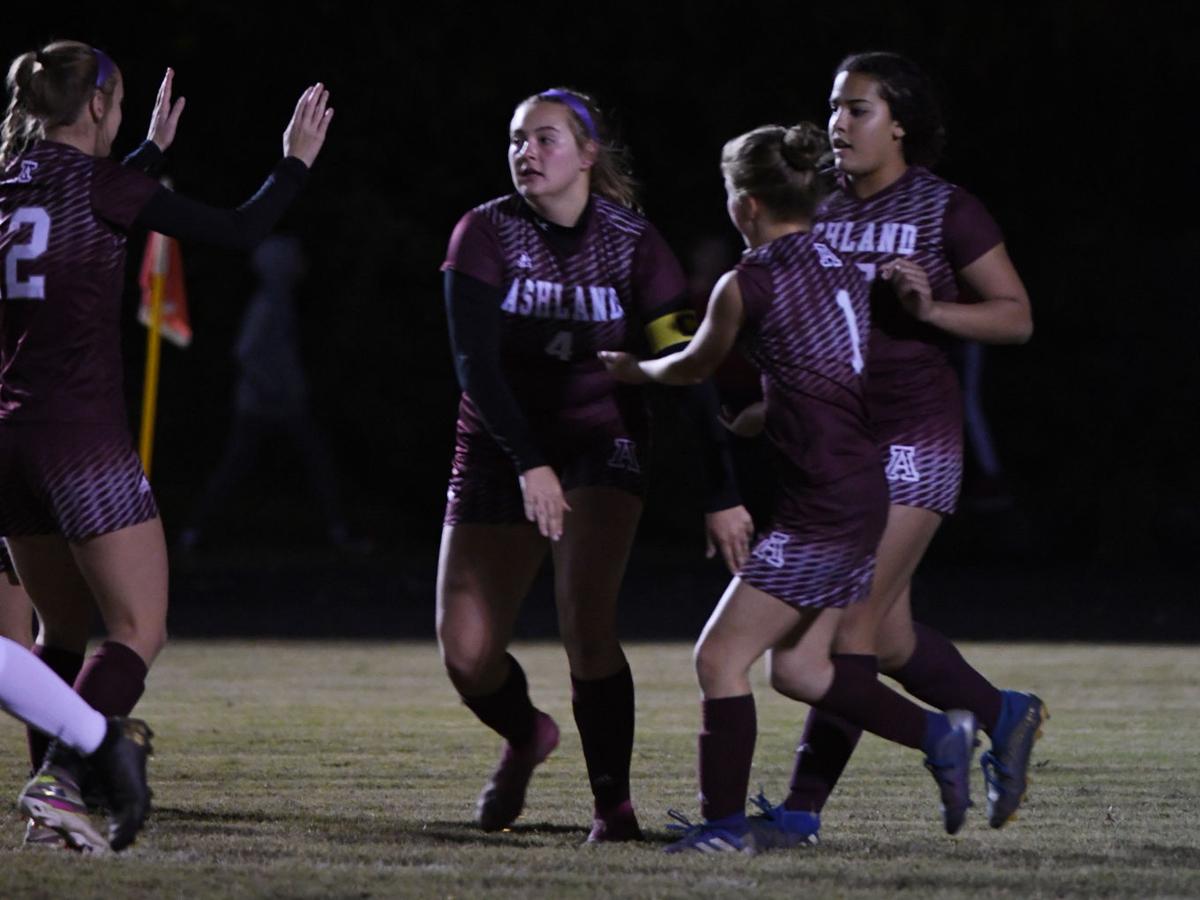 Morgan Bradley, center, celebrates with her Lady Cat teammates after scoring with a header off a corner kick against Prestonsburg. KEVIN GOLDY | THE DAILY INDEPENDENT

Ashland head coach, Jason Mays shouts instruction to his team against Butler on Sunday evening during the 2019 AIT championship game. MARTY CONLEY/ FOR THE DAILY INDEPENDENT

Morgan Bradley, center, celebrates with her Lady Cat teammates after scoring with a header off a corner kick against Prestonsburg. KEVIN GOLDY | THE DAILY INDEPENDENT

Ashland’s boys basketball team may have been the first to finish the regular season undefeated in this region in 92 years, but the Tomcats weren’t even the first from their school to do it in a span of five months.

“That’s unreal, isn’t it?” said John Cook, pilot of Ashland’s girls soccer team that was undefeated all the way to the state semifinals in the fall. “Sit and think about that for a minute. You’ve got two teams out of the same, what, 900-kid high school in eastern Kentucky, and the success that they’ve had.”

Not that the Tomcats have shown much sign of needing help packing that extra weight — the “31” in the win column, the “zero” in the loss column, and the accompanying hopes and expectations — along the high wire with no safety net that is the 16th Region Tournament.

But if they did need that help?

Even if Cook’s connection to basketball is watching it from the stands at Anderson Gym — or wherever else the Tomcats or Kittens are playing — he is uniquely qualified to share some wisdom with the Tomcats of how to handle that mantle.

He’d say, don’t worry about it.

Cook actually did, more or less, in a chance meeting with Tomcats hoops coach Jason Mays in a restaurant earlier this season.

“Jason and I were talking,” he said, “and I guess I told him, take a deep breath and enjoy it, because man, it’s special. It really is.

“And sometimes we kinda get stressed because he knows he’s got a talented team. I knew I have a talented team; I didn’t want to get in the way of them achieving all that they could achieve, and my girls did. They went above and beyond. I think it’s the same way with Jason. He’s got that similar philosophy; he’s gonna let the kids play.”

And Morgan Bradley — a senior on the LadyCats team in the fall that picked off one opponent after another en route to the state’s final four for the first time — could give some pointers to her cousin, Justin, a senior glue guy extraordinaire, and his Tomcats teammates.

Mays recognized a key similarity between his team and Cook’s soccer bunch.

“Every day in the hallways, at lunch, you could see how close their girls were to each other,” Mays said. “That’s our strength, too, and I’m sure the strength for the women’s soccer team this year was their togetherness.

That line of thinking stretches to who plays starring roles and who gets the ink. The Tomcats have spread that around, but their most consistently dazzling player is freshman point guard Colin Porter.

Goal maven Abby Huff played that role for the LadyCats.

“There is a similar build there,” Cook said. “I can watch it with the boys, too: they don’t care (who gets the attention). You can see it in the way they play and the way they interact with each other and coach Mays. The only thing they care about is getting that W.”

Morgan Bradley said that while she and Justin talk often, it isn’t usually about basketball. She regardless recognized the run the Tomcats were on had the potential to stay perfect deep into the season when they won at Boyd County on Jan. 29 and at Rowan County 13 days later, she said.

“I think sometimes they didn’t really know how to take the pressure (earlier in the year),” Bradley said, “but so far in the tournament and against Russell (in the region tournament quarterfinals), they did a great job. ... I think they’re handling it very well at this point.”

The LadyCats did the same — growing into the ability to withstand opponents’ best shot at stealing their donut in the loss column.

“People would come up and ask me, ‘Hey, don’t you want to get that monkey off your back? Don’t you want to get that first loss?’” Cook recalled. “Nah, man, we’re gonna play to win every game. By doing that, you learn to play with pressure and you learn to be relentless. You have to be relentless to do that, because everybody’s gonna give you their best game.”

The ’Cats cagers have gotten used to that, too. So far they are 7-0 in games decided by two possessions or fewer. One of those was against Rowan County, their opponent in tonight’s region tournament semifinals, and another against Boyd County, a potential region final foe should they get there.

Ashland can’t concern itself with that, Bradley advised.

“I would definitely say for them to keep in mind what their goal is and to keep that mentality of playing to win and to not lose focus of all the hard work that they’ve put in,” Bradley said, “because it is a very special feeling to get that far.”