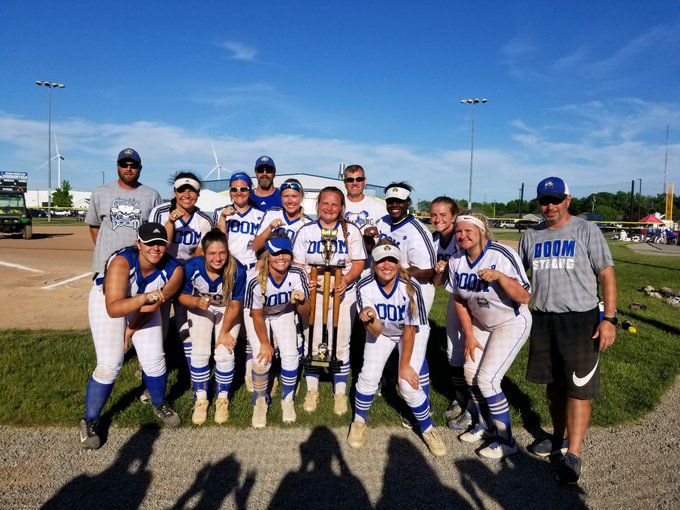 The Cincy Doom celebrate after winning their opening tournament of the season last month in Findlay, Ohio. 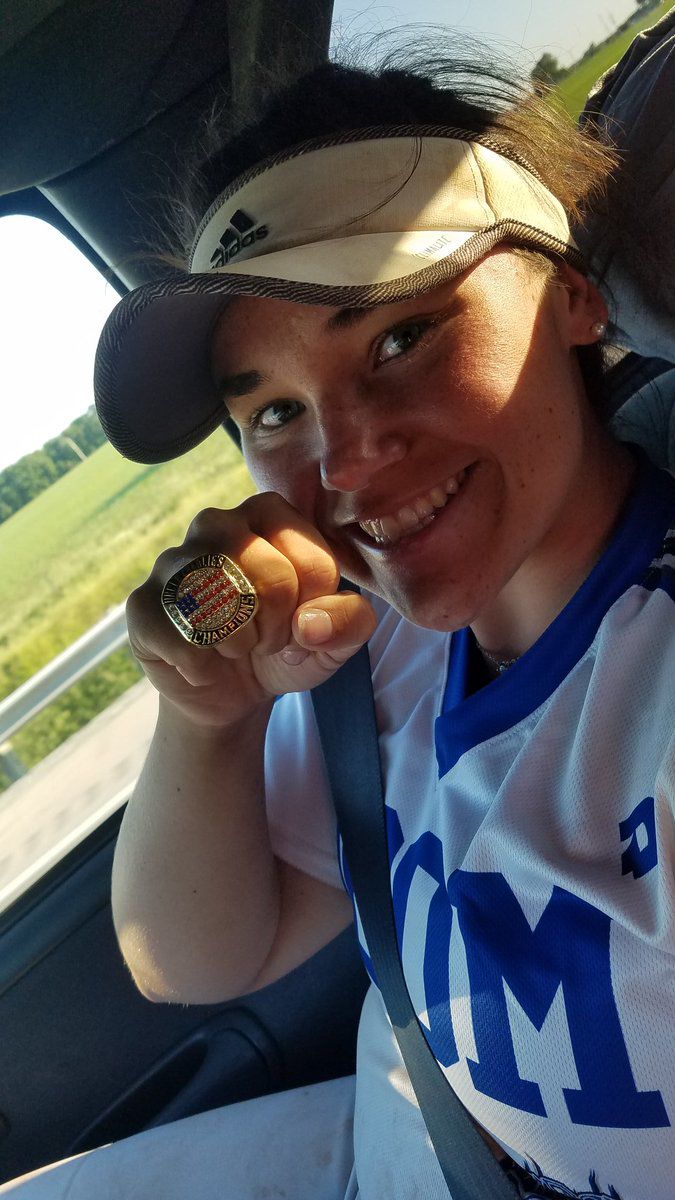 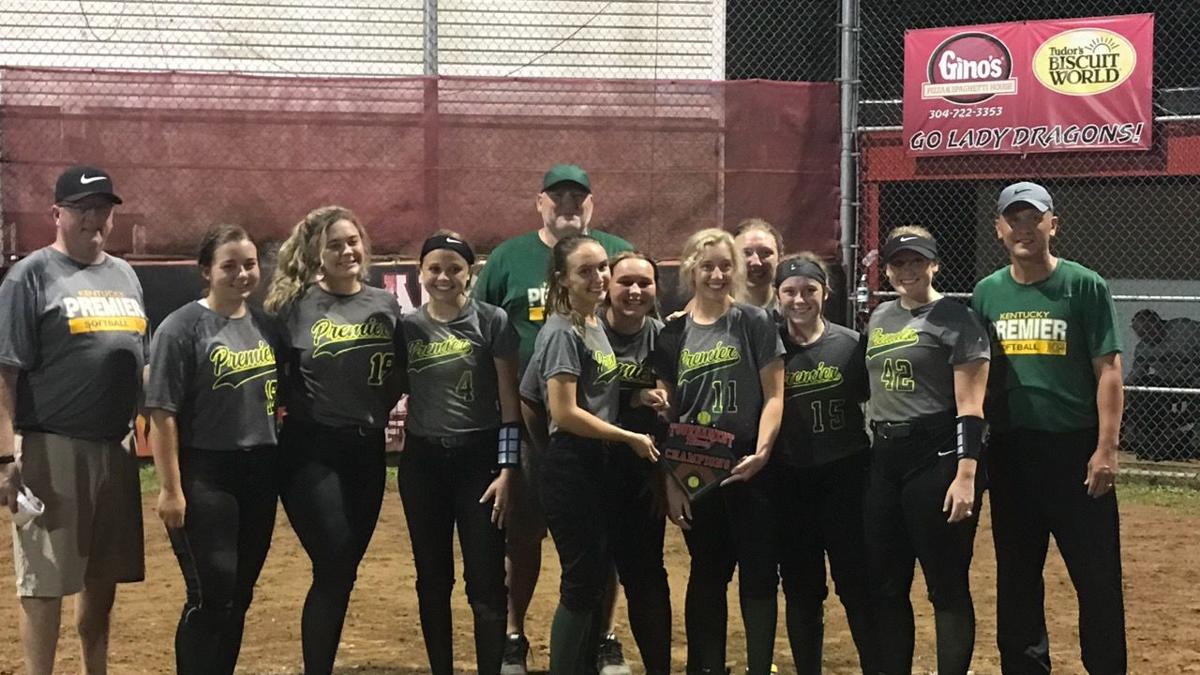 The Cincy Doom celebrate after winning their opening tournament of the season last month in Findlay, Ohio.

When Raceland’s Chloe Collins steps into the batter’s box, it often spells doom for the opposing pitcher.

The soon-to-be-senior recently added some bling to her jewelry collection.

Collins’ travel team, the Cincy Doom, won its first tournament of the season in early June. It was also the players’ first softball action since the fall.  After an undefeated week that included pool play, the team was rewarded with a huge trophy and each player sported a sizable championship ring.

“It was kind of crazy,” Collins said. “In these tournaments, you don’t get rings. I didn’t know until they brought the box out. They are heavy. It was a solid ring. It wasn’t plastic. I was shocked, but absolutely thrilled.”

Travel ball has taken on a whole new meaning this summer with the cancellation of spring sports and the high school softball season. Collins said playing for championships is the ultimate goal, but she was excited to get back on the field.

“It was definitely a time for shaking the rust off a little bit,” Collins said. “The last time we did this was the fall. I was just so happy to be back out there and getting to play with the girls and see the seniors who didn’t get to have their senior season. They had such high expectations and it was great seeing them go out and play.”

“We are always playing to win,” she added. “It’s always our main goal, but we were truly playing for fun.”

Travel ball can be an expensive endeavor. Due to the ongoing health crisis, most teams aren’t traveling as far as in years past. The miles can mount up. Team fees and travel expenses do accumulate.

Collins’s father, Tom, said sharing that time together with his daughter and watching her play the game she loves makes it all worthwhile.

“If you want to raise the bar and see how your child fits into the big scheme of things,” Tom Collins said, “you have to expand, go to other places and see other competition. Unfortunately, it does take a lot of money. Chloe sacrifices vacations. Our vacation is travel ball. My wife and younger daughter go to Disney; we go to travel ball tournaments.”

Chloe has played travel ball since the sixth grade. She picked the Doom this season because of her talented teammates. She also got an assist from her outgoing father.

“Everyone on the team is very committed,” Chloe Collins said. “There are a bunch of really good girls on this team. That is what made me pick that team.”

“My dad is a social butterfly,” she continued. “He talks to everybody, even if he doesn’t know them. We saw (Doom) coach (Jason) Barnes at every single tournament we went to and I had played them prior to this season. They had a couple of girls age out, specifically their first baseman. So, it was a pretty good fit for me.”

Travel ball can also be a key recruiting tool. Some college coaches prefer to scout during the travel season and attend tournaments where hundreds of teams might be participating at one location.

Chloe Collins, a Bellarmine commit, said it’s also beneficial for her to play with and against college-level talent.

“It has helped my game,” Collins said. “You are playing against girls that want to play on the college level. It does force you to level up and see a different level of pitching that you will see in college. The 16th Region has some great talent every year. It makes you level up too, but in travel ball, you see it every single day. There are no off days. You see girls throwing 60 to 65 miles per hour.”

Raceland softball coach Robbie West has coached travel ball for 10 years and has skippered the Kentucky Premier team for the last three. He said players have to be proactive in their own recruiting and stay in contact with potential college coaches when they are allowed to do so.

“Right now, there is so much uncertainty with college coaches being able to come out and watch,” West said, “I am telling my players it is extremely important that they send emails and texts to coaches if you want to play at the next level.”

West believes the due diligence is important given the current climate of recruiting. Six starters on the Lady Rams team will being playing softball in college. He’s implemented a philosophy where he’s not just teaching softball to his players but informing them and their parents on how the recruiting process works.

He said traveling to different areas of the country to play is fun for everyone, but it was former Kentucky Christian University assistant softball coach Mike Travis who enlightened him on how to get a coach’s attention during travel season.

“You have to establish that connection with a coach,” West said. “With college coaches, their time is limited. They don’t have the budget to go wherever they want to recruit. They have certain times that they can go. If a college coach shows up to a tournament, it’s because they are there recruiting somebody because they have gone to a camp or already established a relationship.”

West coaches travel ball with former Greenup County softball coach Eric Keeton. The roster includes players from Louisville to Charleston, all of whom were impacted by the pandemic this spring. They brought home their own championship rings after winning a tournament this weekend.

“It was fun to see them out on the field,” West said. “It’s been difficult. A lot of these kids haven’t been on the field since last fall. The uncertainty of even being able to play was tough. The heartache of losing their season, and for us (at Raceland), a couple of girls losing their senior season was hard.”

Chloe Collins said the time away from the field was painful, but she found ways to occupy her time and keep her game sharp.

“I had a lot of free time that I never knew I had,” Collins said. “I cleaned out my closet four times. The past couple of weeks, I’ve started hitting again with my hitting coach, Tyron McKinney. I’ve been hanging out with (former Raceland catcher) Morgan Curley a lot. She is my best friend. We’ve been keeping each other sane, for the most part.”

As Raceland’s principal and athletic director, Tom Collins said it’s unfortunate that seniors around the area didn’t get the chance to have one more season in the sun. As a father, he will cherish each day he gets to watch his daughter play softball.

“In reality, you spend all this time and effort, but it pays off,” Tom Collins said. “It’s an all-in effort. But in the end, you get to see your girl compete against better players and putting it on the line. It’s very rewarding for her and for us parents to watch. She accomplished those goals and that’s the payoff for me.”