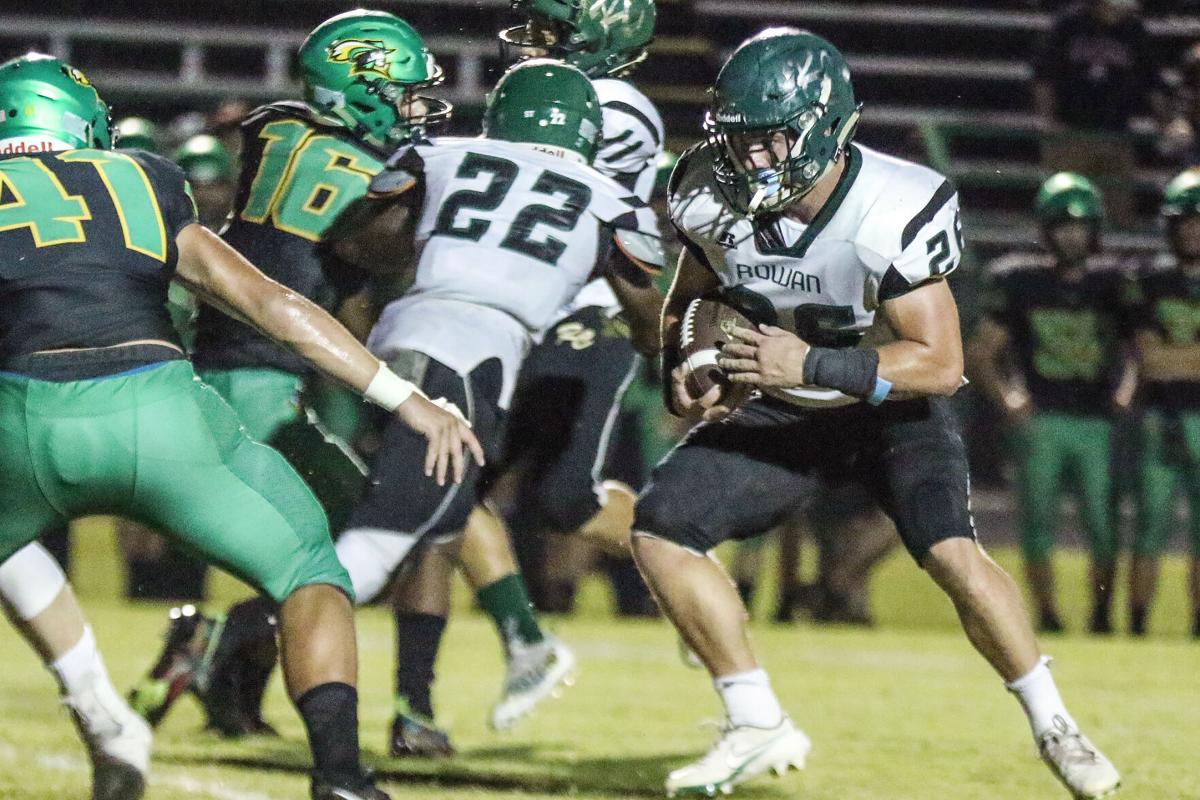 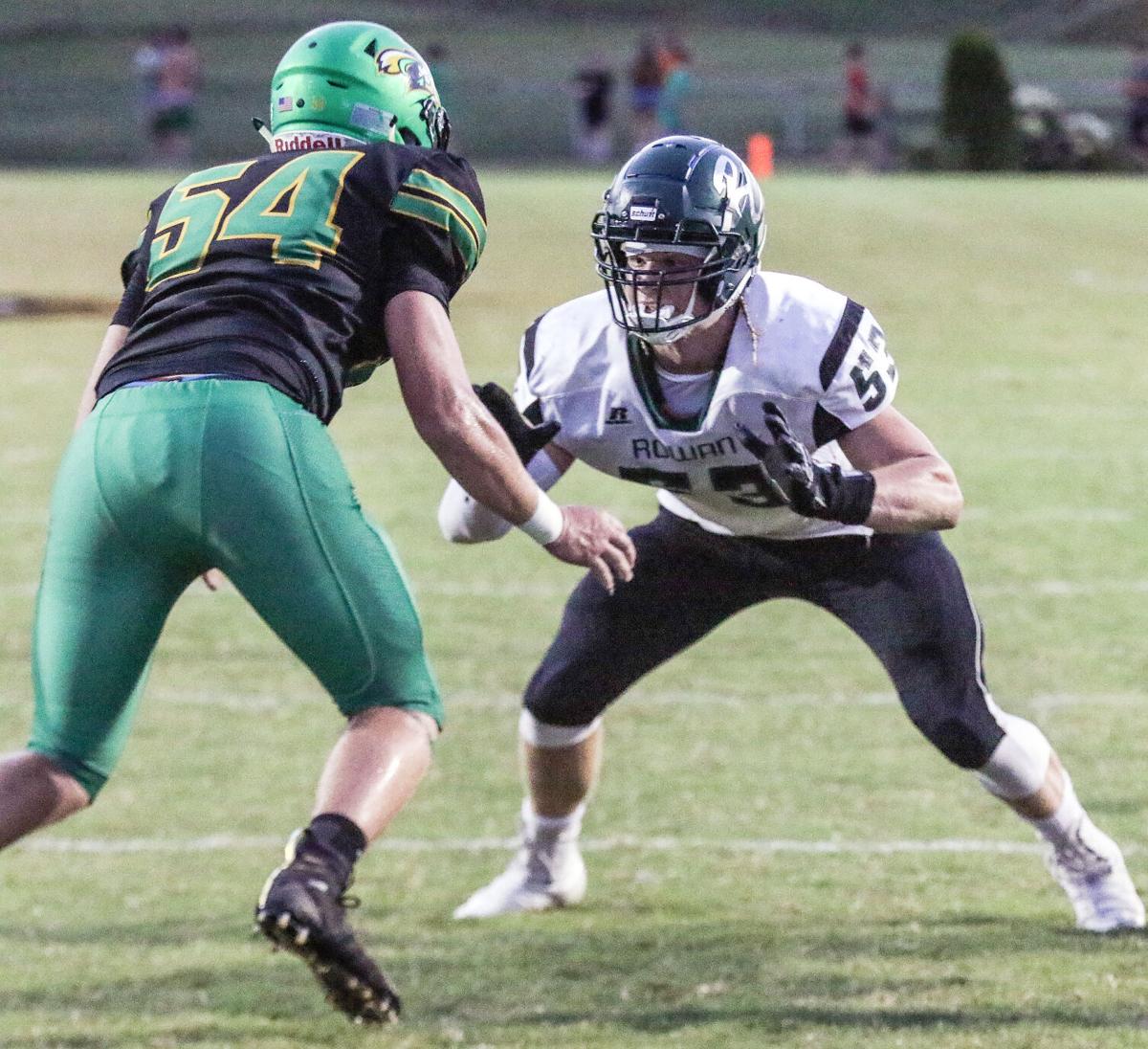 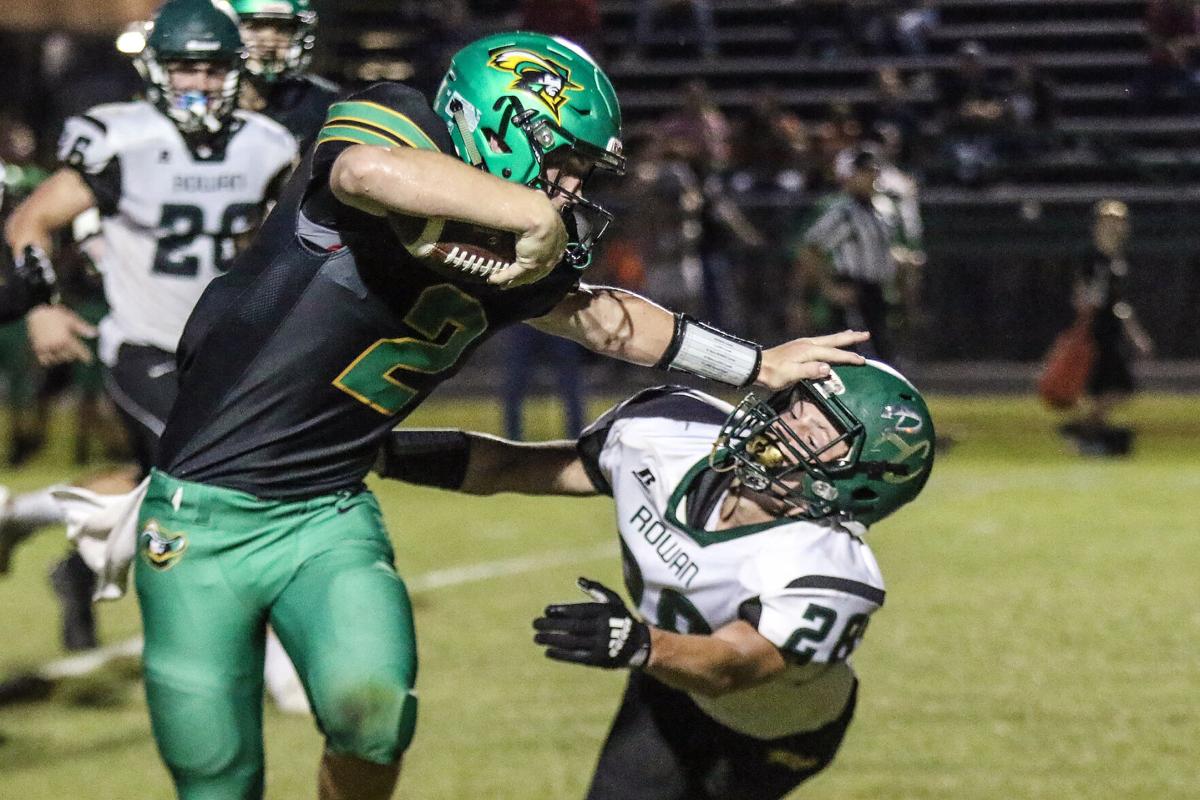 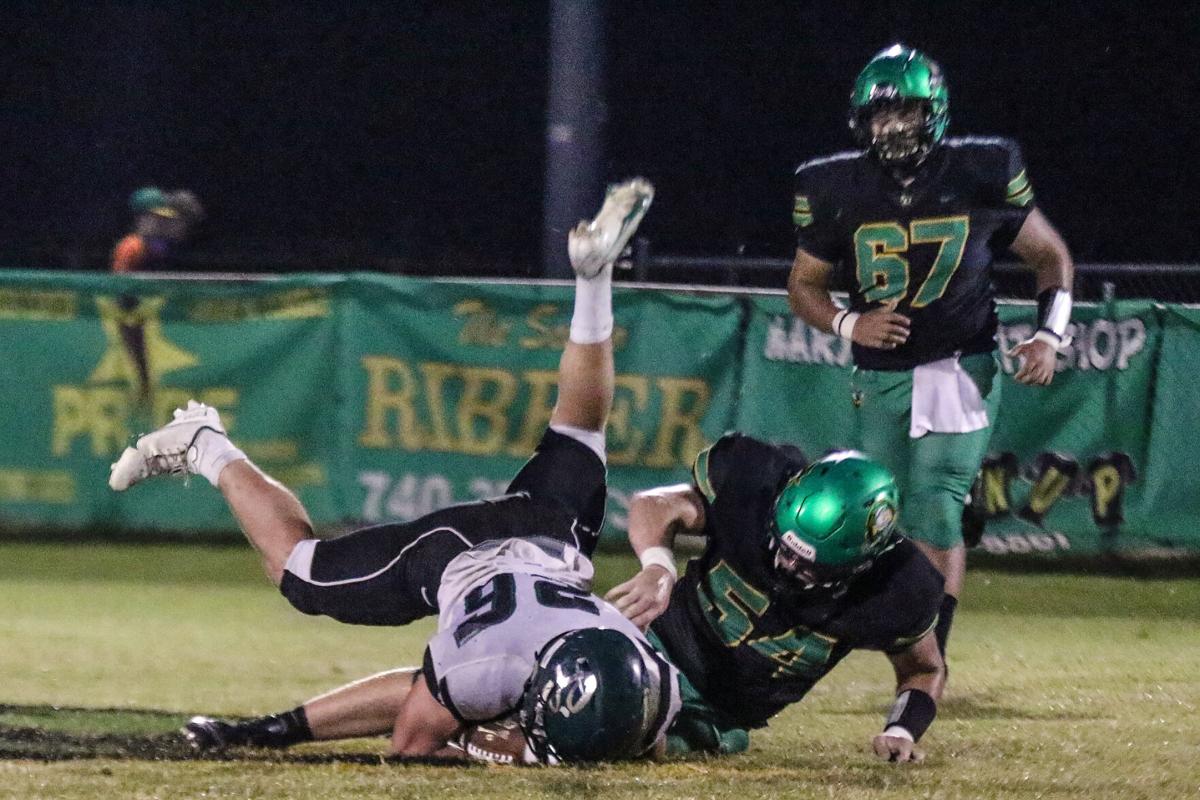 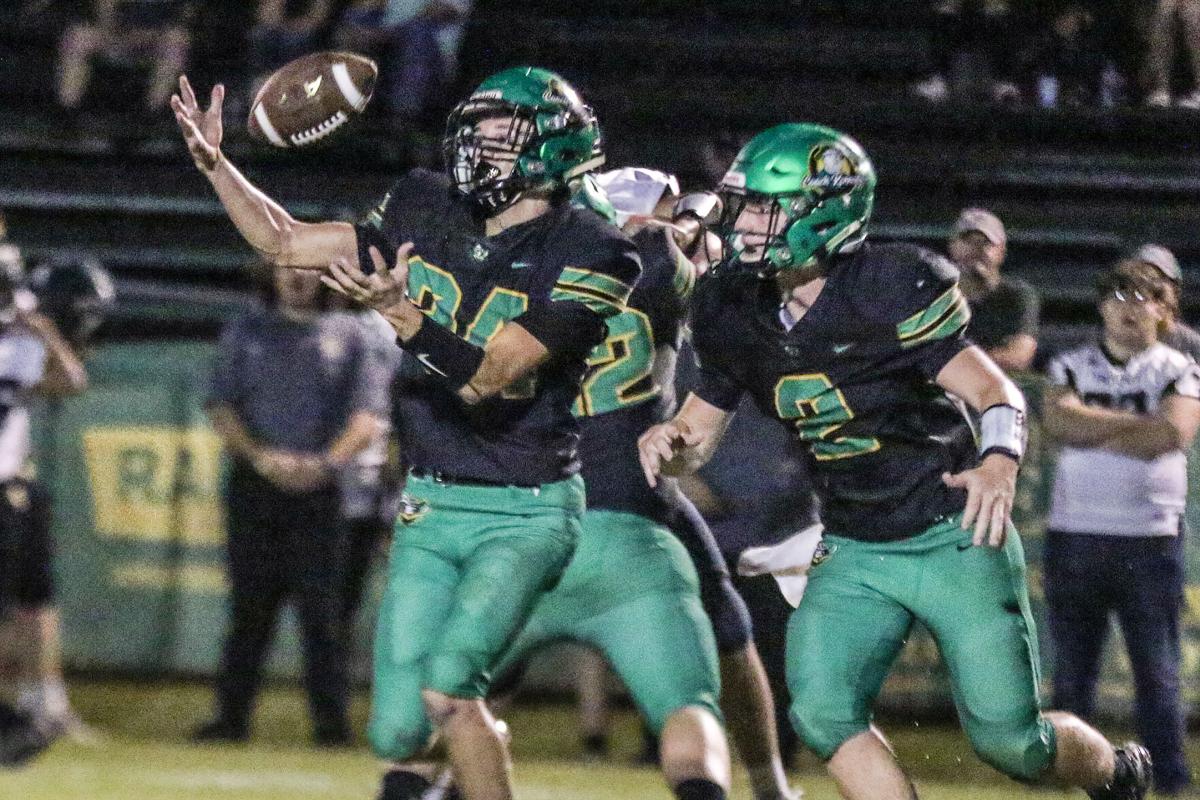 Greenup County’s Braxton Noble recovers the ball after the handoff from quarterback Tyson Sammons was bobbled during the third quarter of Friday’s loss to Rowan County. MATT JONES | THE DAILY INDEPENDENT 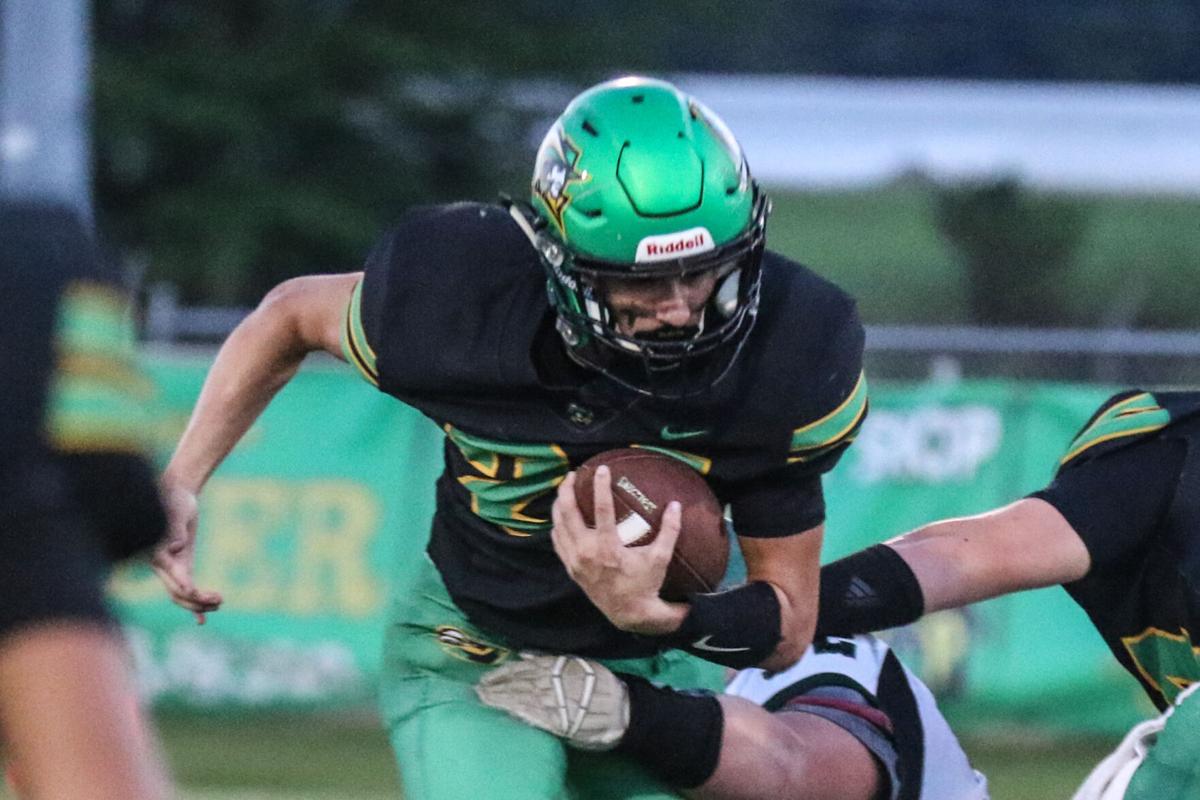 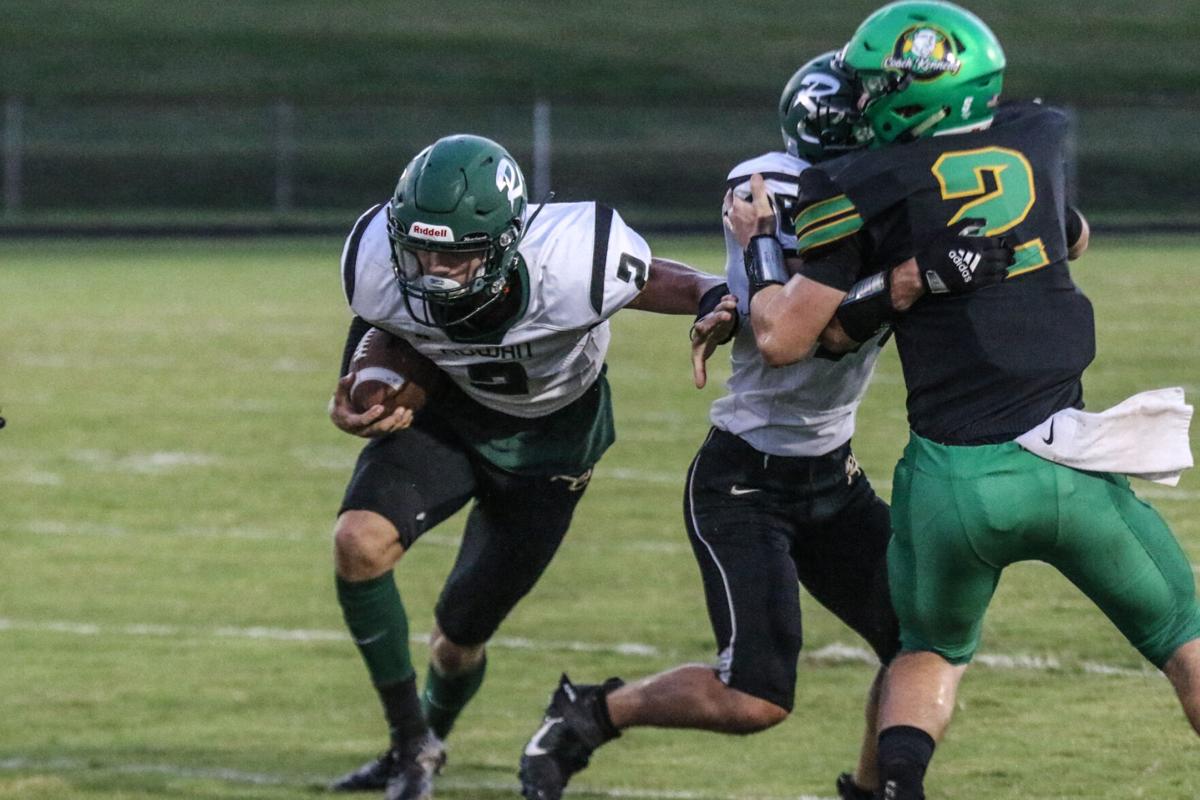 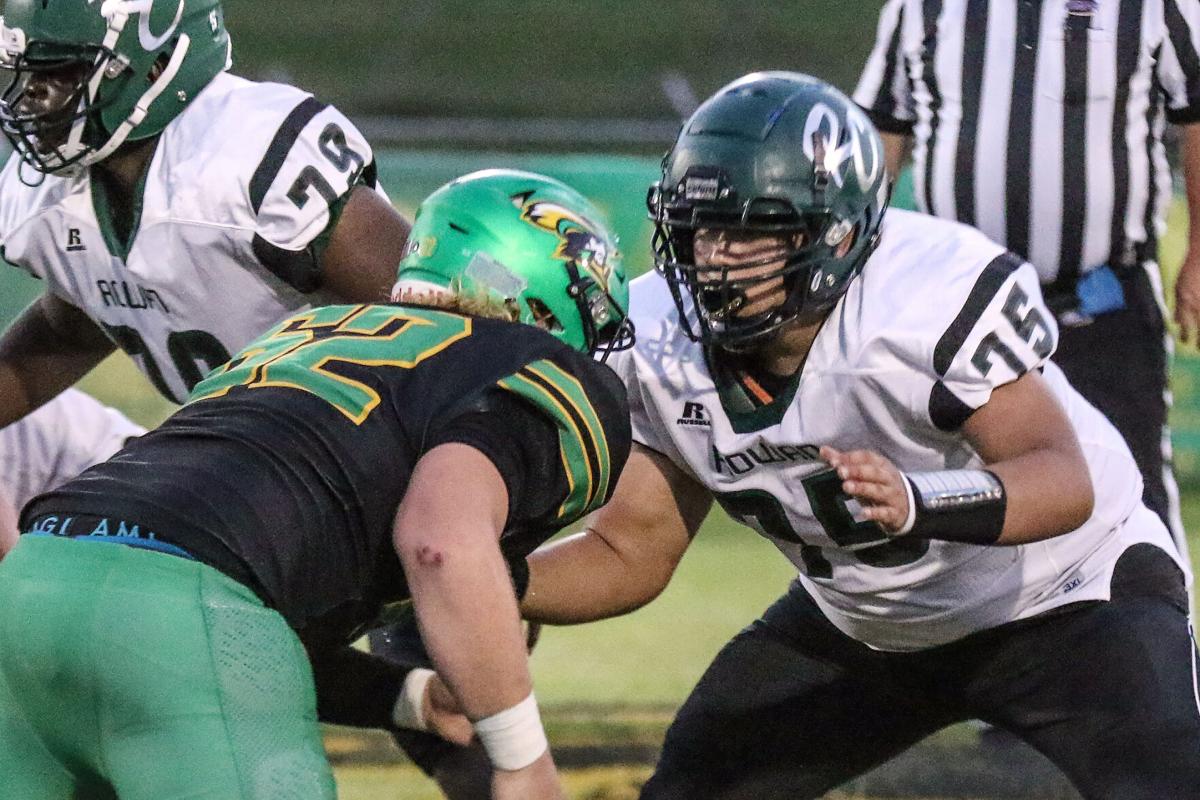 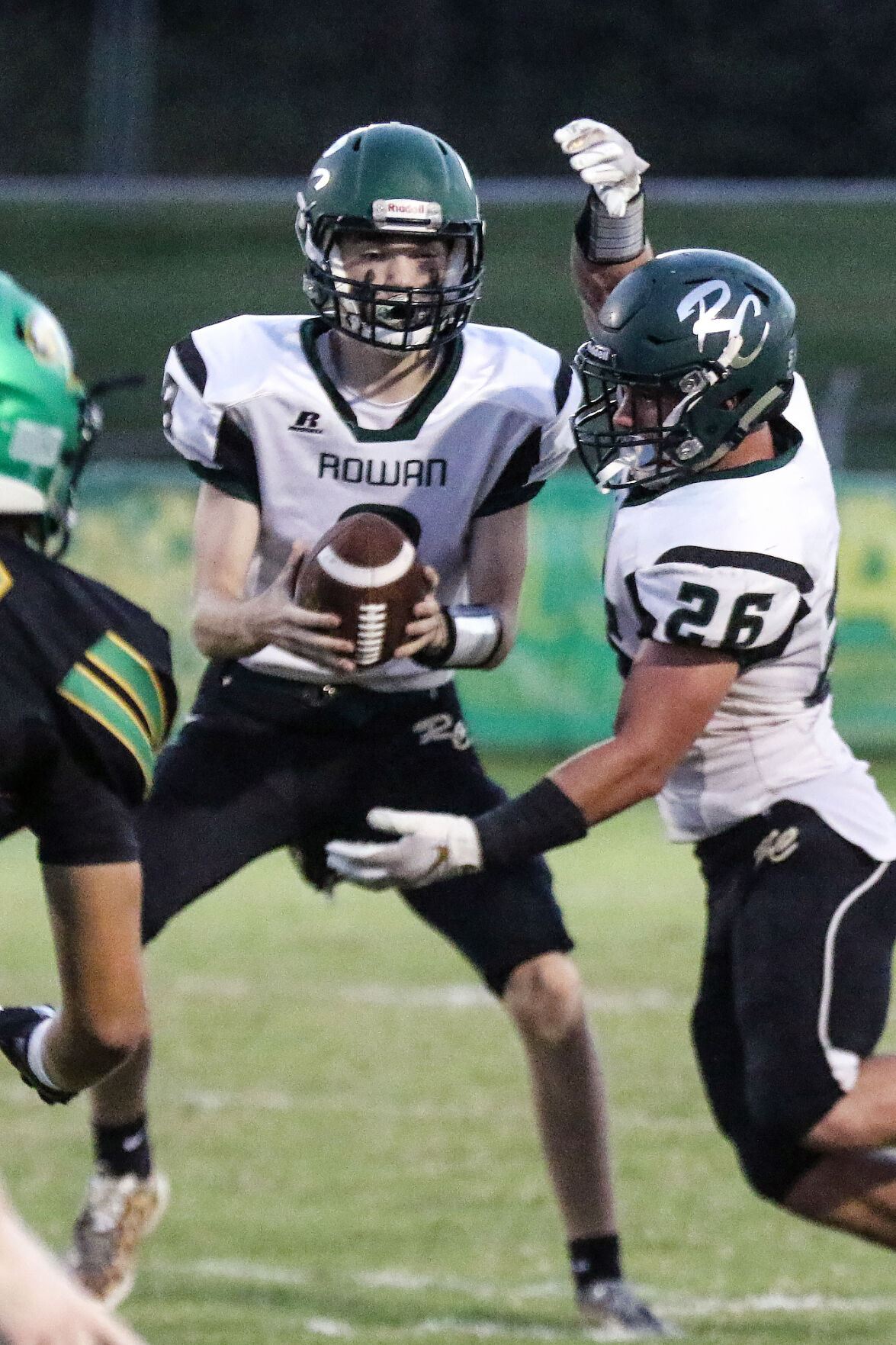 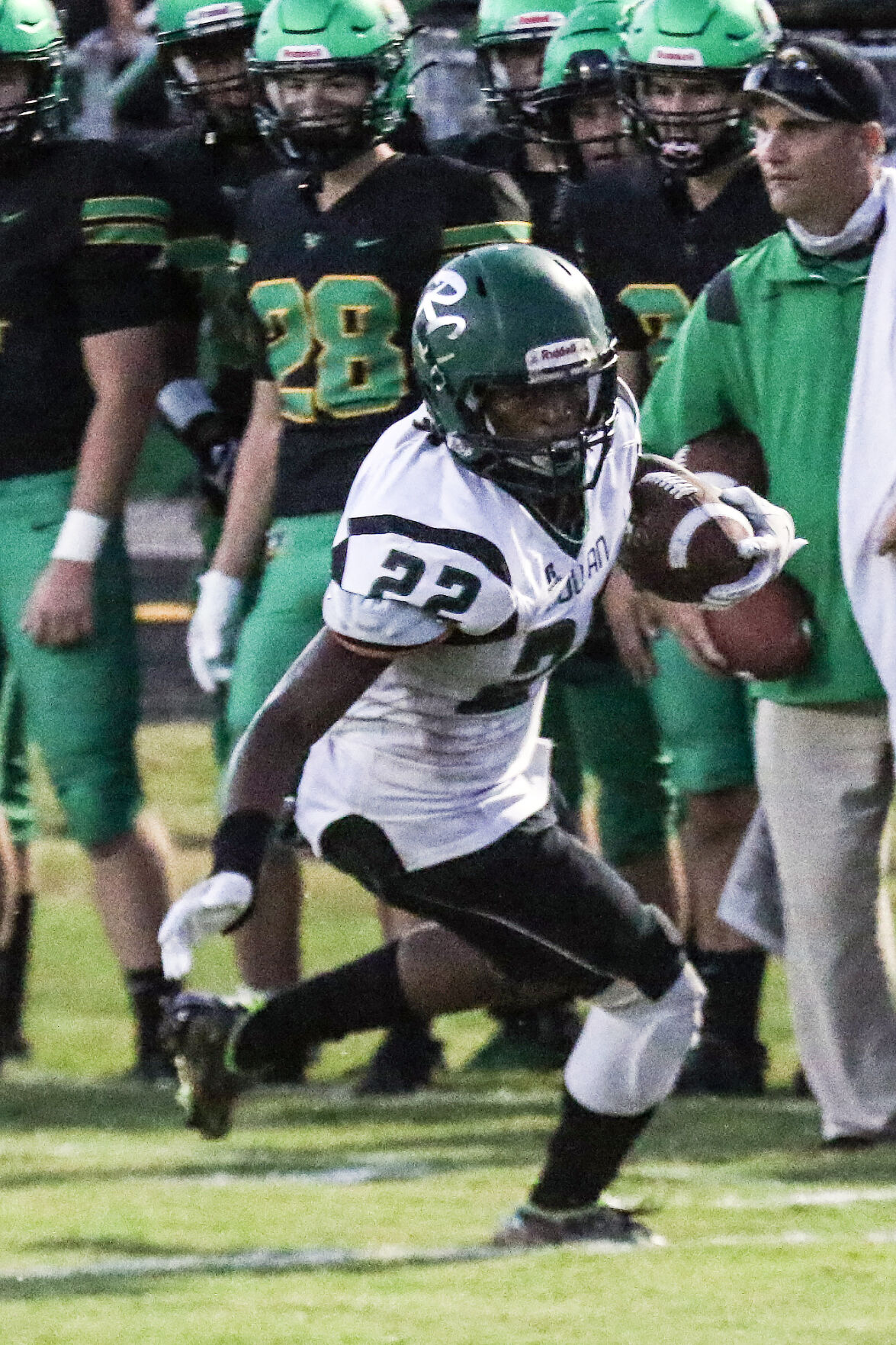 Rowan County’s Rocky Miller looks to cut the ball toward the goal line in the red zone during Friday’s win over Greenup County on Friday. MATT JONES | THE DAILY INDEPENDENT

Greenup County’s Braxton Noble recovers the ball after the handoff from quarterback Tyson Sammons was bobbled during the third quarter of Friday’s loss to Rowan County. MATT JONES | THE DAILY INDEPENDENT

Rowan County’s Rocky Miller looks to cut the ball toward the goal line in the red zone during Friday’s win over Greenup County on Friday. MATT JONES | THE DAILY INDEPENDENT

LLOYD Cole Wallace wanted another season on the high school gridiron. He has seen plenty of yards already, and the numbers keep piling up.

The Rowan County running back took advantage of Senate Bill 128 and returned to the Vikings this year. The senior keeps making an impact, not only with his teammates but opposing defensive game plans as well.

Wallace gained 216 yards on the ground, pushing his season total to 900 through five games. One of the state’s leading rushers a season ago also included two touchdown runs in a 30-9 win at Greenup County on Friday night.

“He is an excellent leader,” Rowan County coach Kelly Ford said. “He is always encouraging the young guys. He came back with a purpose and to help himself at the next level. He has a great attitude and he has been a tremendous asset this year.”

“It’s really settled him down in the pocket the last three weeks,” Ford said of Menard. “He finds the open guy. We did simplify things for him so he’s not trying to read two or three things out there. (Offensive coordinator) coach (Scooter) Charles picks his spots whenever he wants to throw the ball and get the ball to Landin. It has helped Zach a lot as a young quarterback.”

Wallace needed just two plays to help Rowan County (3-2) emerge from a close game at halftime. On the second snap of the second half, Wallace took the handoff from Menard and found a seam to the outside. The senior even appeared to stop for a moment to find another avenue along the sideline.

Wallace found an open lane and raced away from the Musketeers defense for an 80-yard touchdown run.

Raines encountered similar daylight, even in the pleasant Lloyd night air, late in the third frame. The receiver was set to collect a screen pass from Menard. The ball was tipped, but it still managed to find Raines’s grasp. He slid past a group of green jerseys and won the scamper to paydirt. The 61-yard TD catch was the senior’s second of the night. He snatched a short touchdown pass on a crossing route to open the Vikings scoring.

“Tonight was a complete failure of our defense,” Greenup County coach Zack Moore said. “Whether we were spilling pullers, leveraging the ball correctly or leaving our feet on defense, I’m not sure we could have dropped the ball any more on those things.

“It’s a reflection on me,” he added. “I am the defensive coordinator. We apparently are not doing a very good job of it. I have some work this week as well.”

The two teams added field goals in a first half that resulted in a 9-3 Vikings lead at the break. Ford said his defense made some adjustments during intermission that proved to be productive. Rowan County held its ground on a pair of fourth-down attempts by Greenup County (1-3).

“We just told them to read their keys and slow down a little bit,” Ford said. “The quarterback counter and that power play was a big play for them. We were just overrunning it. At the end of the fourth quarter, we finally figured it out.”

The Musketeers have managed competitive opening halves in their first three games, but slowly watches the opposition gain separation.

“It has to be a conditioning issue right now,” Moore said. “As a coaching staff, this is where we have to go to work and figure out how to get more kids in the game. We played more kids (Friday night) then we have this year.

“The performance they put forth during the week is really good,” he continued, “but it’s how we practice. We have to practice fast and with great tempo so we can stay conditioned during the week.”

Freshman Tyson Sammons continues to get acclimated under center. The quarterback showed off his wheels with 122 rushing yards and a fourth-quarter touchdown.

“Tyson will be just fine,” Moore said. “Tyson Sammons did everything he could offensively to keep us in the game.”

The Vikings have accumulated 77 points in their last two contests and feel they are ready for district play, which starts Friday at Scott.

“We have progressed each week and we have improved to get us ready for this (district) run,” Ford said. “Hopefully, the guys can stay healthy and keep flowing.”

Harold Robert Wilson 82, of Huntington, husband of Norma V. Wilson, died Sunday October 17, 2021. He was a US Airforce veteran, and retired from AK Steel. Funeral services will be conducted 2:00 PM Thursday, October 21, 2021 at Chapman's Mortuary. Burial will be in White Chapel Memorial Gard…