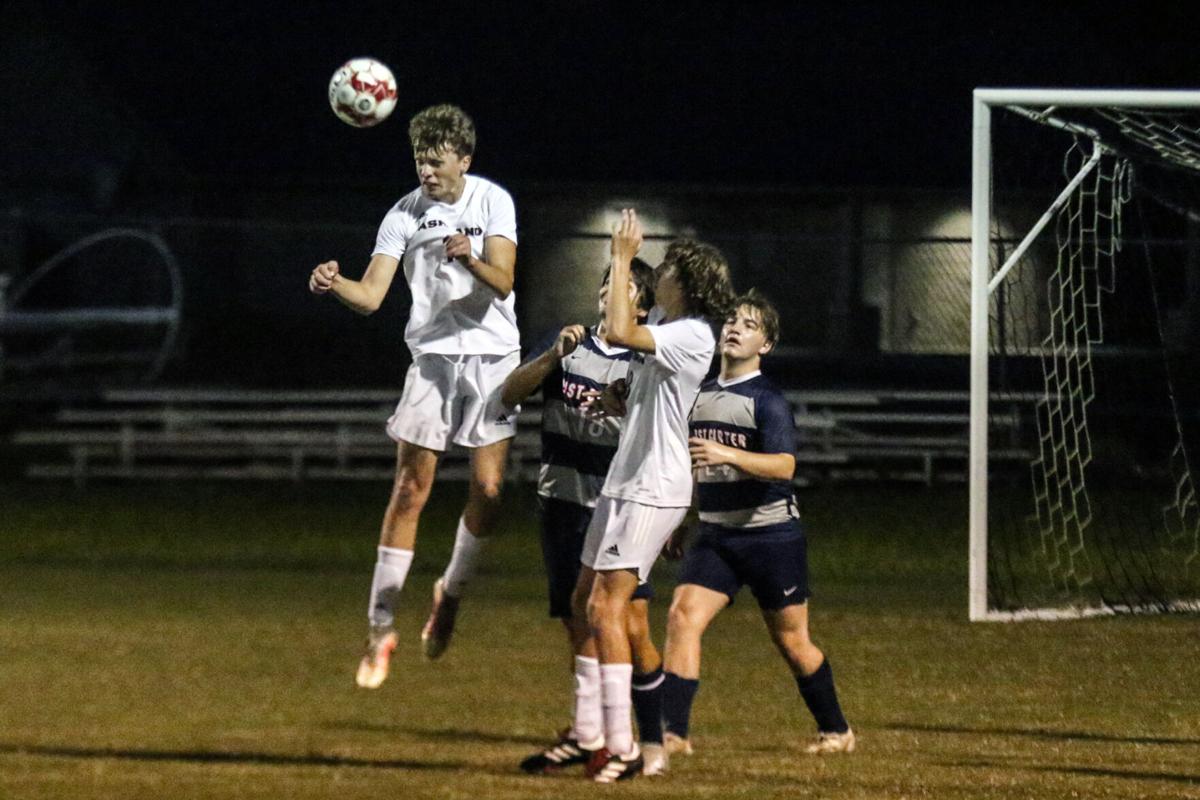 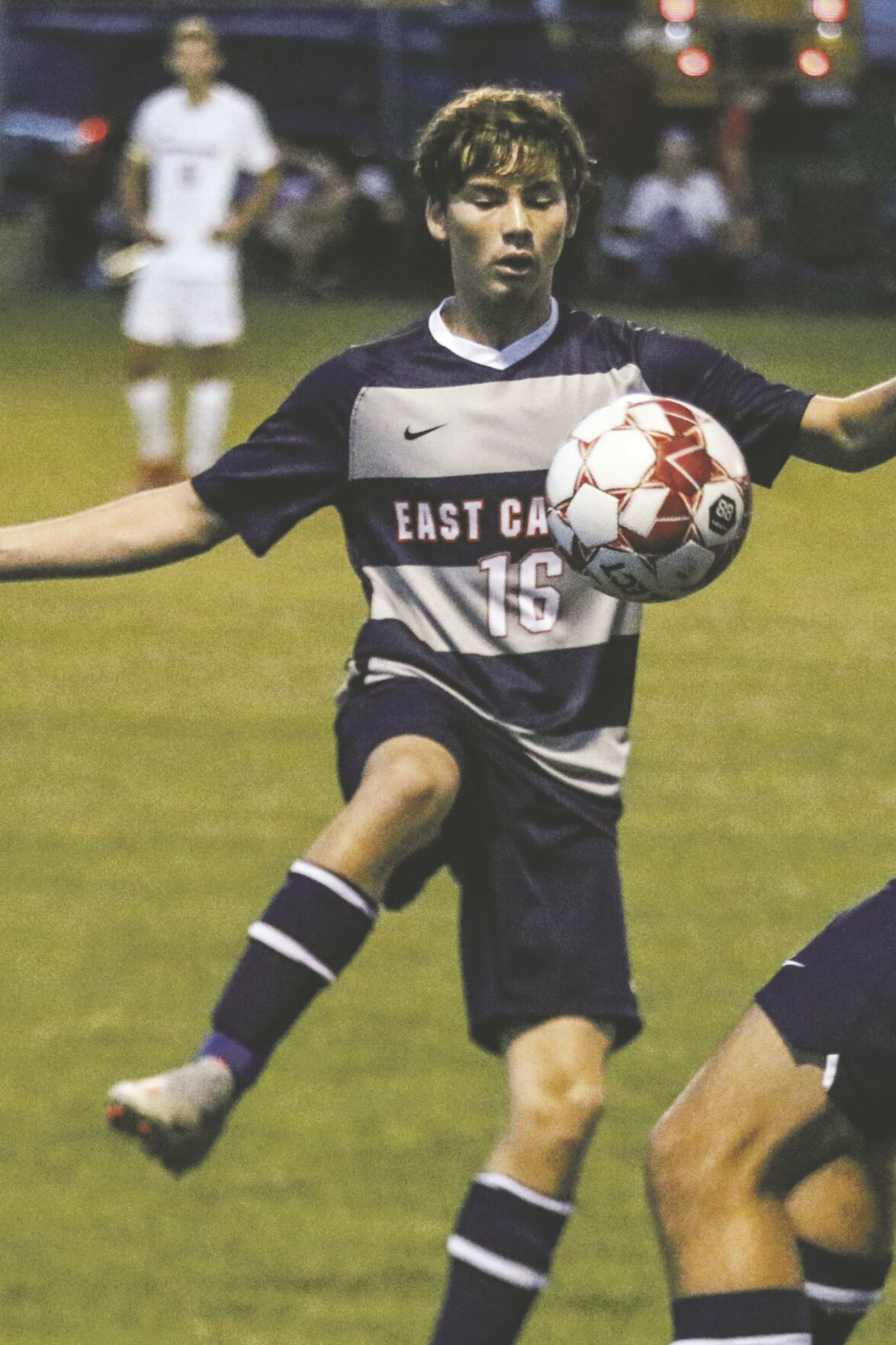 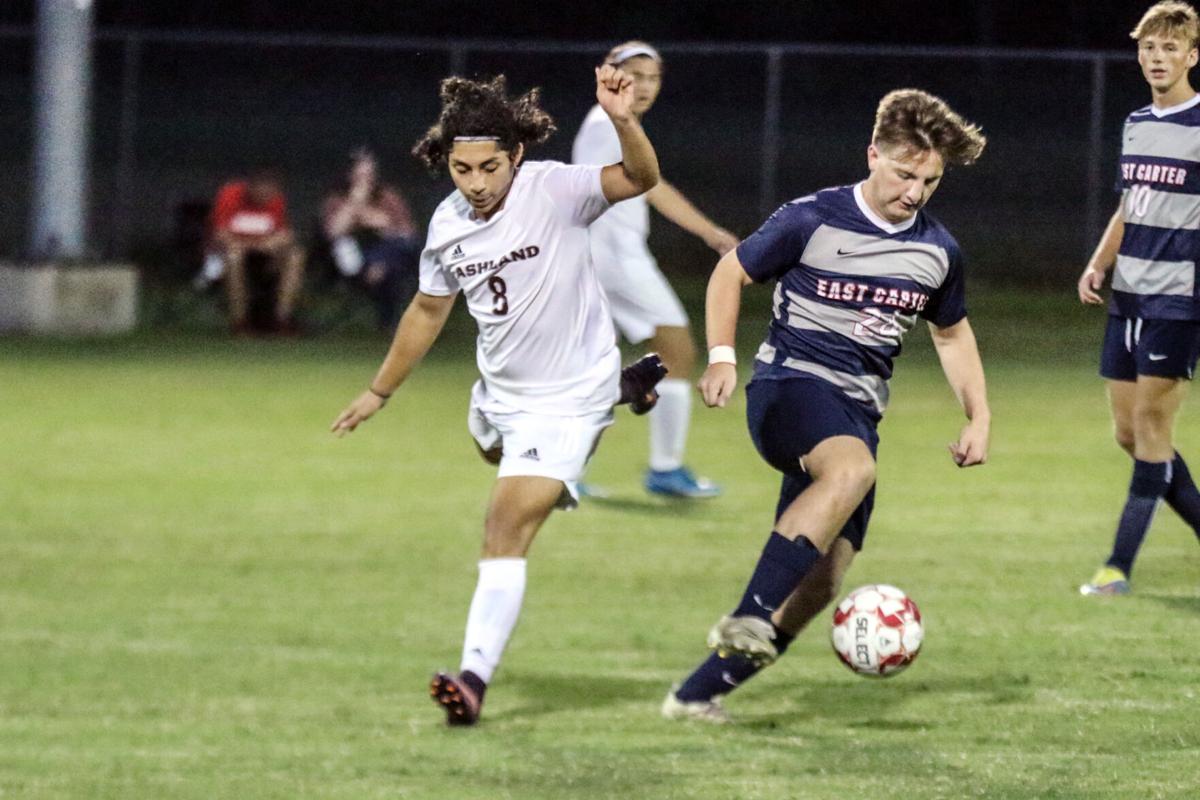 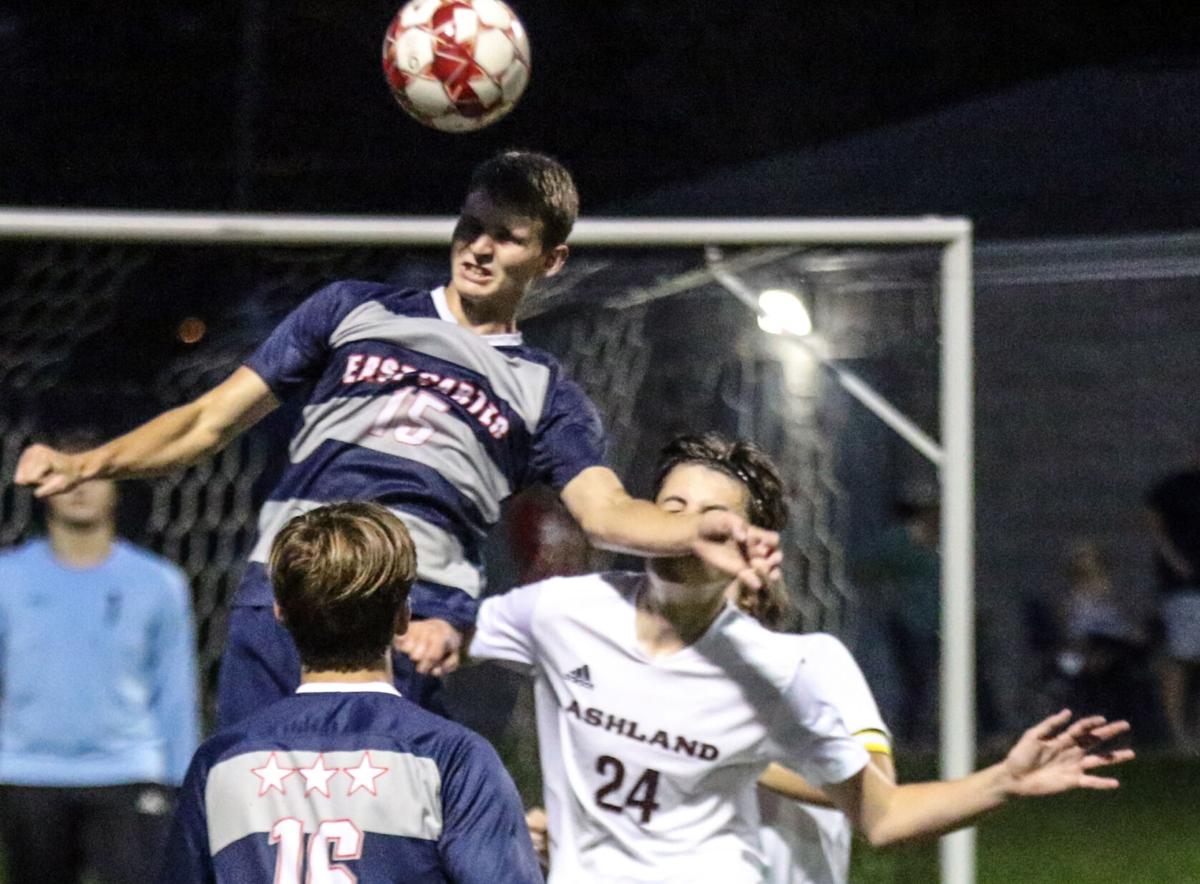 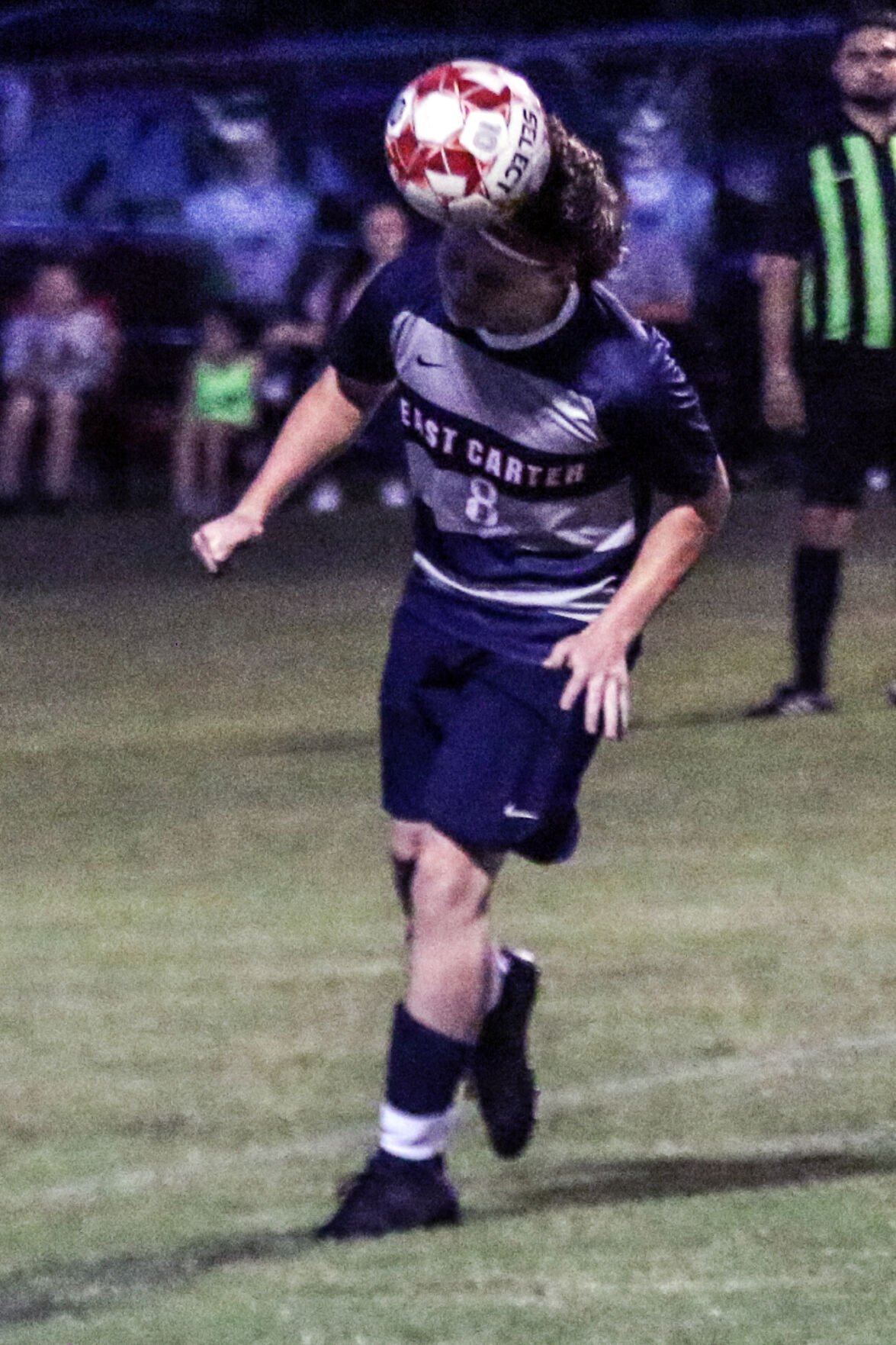 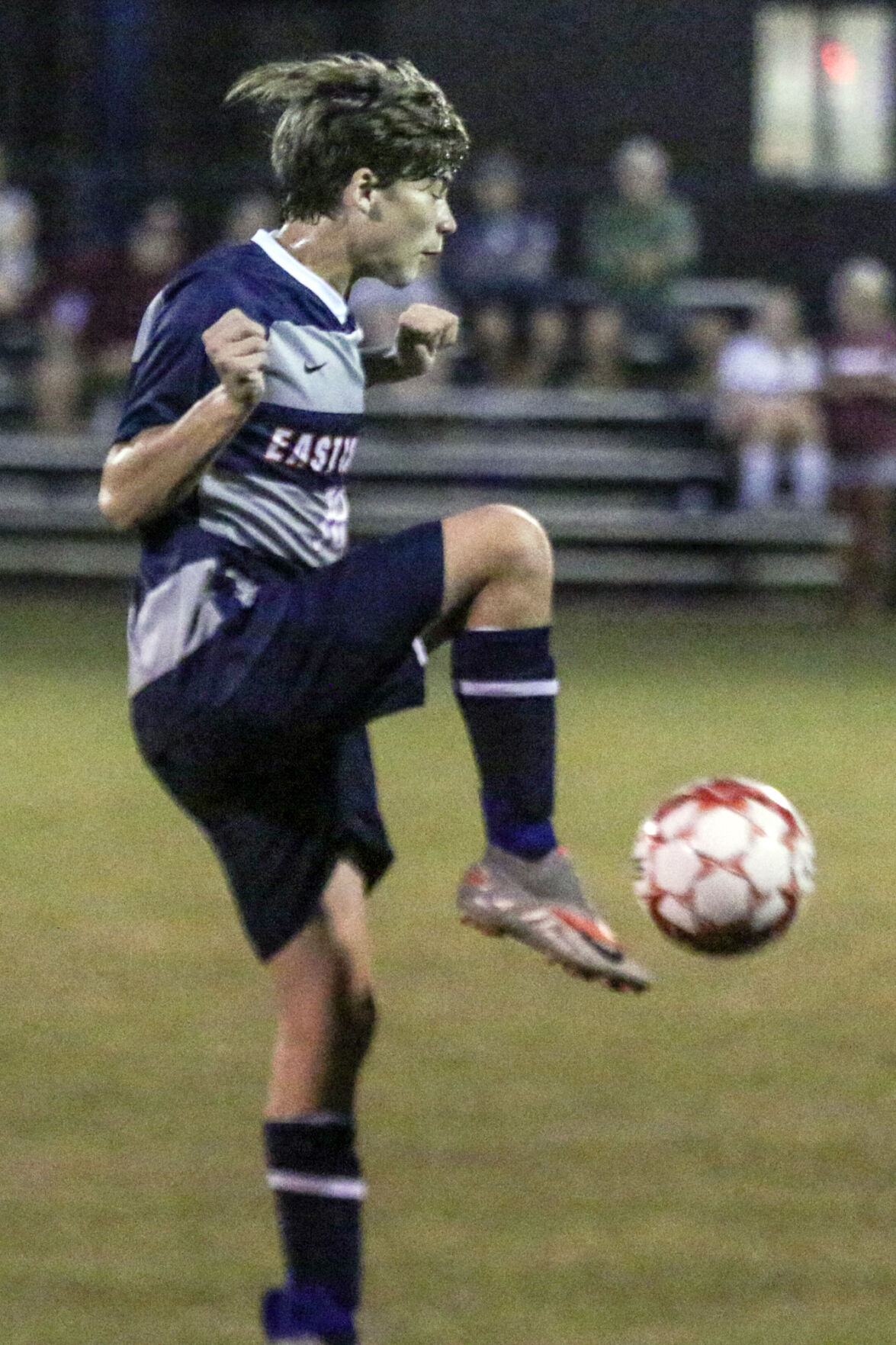 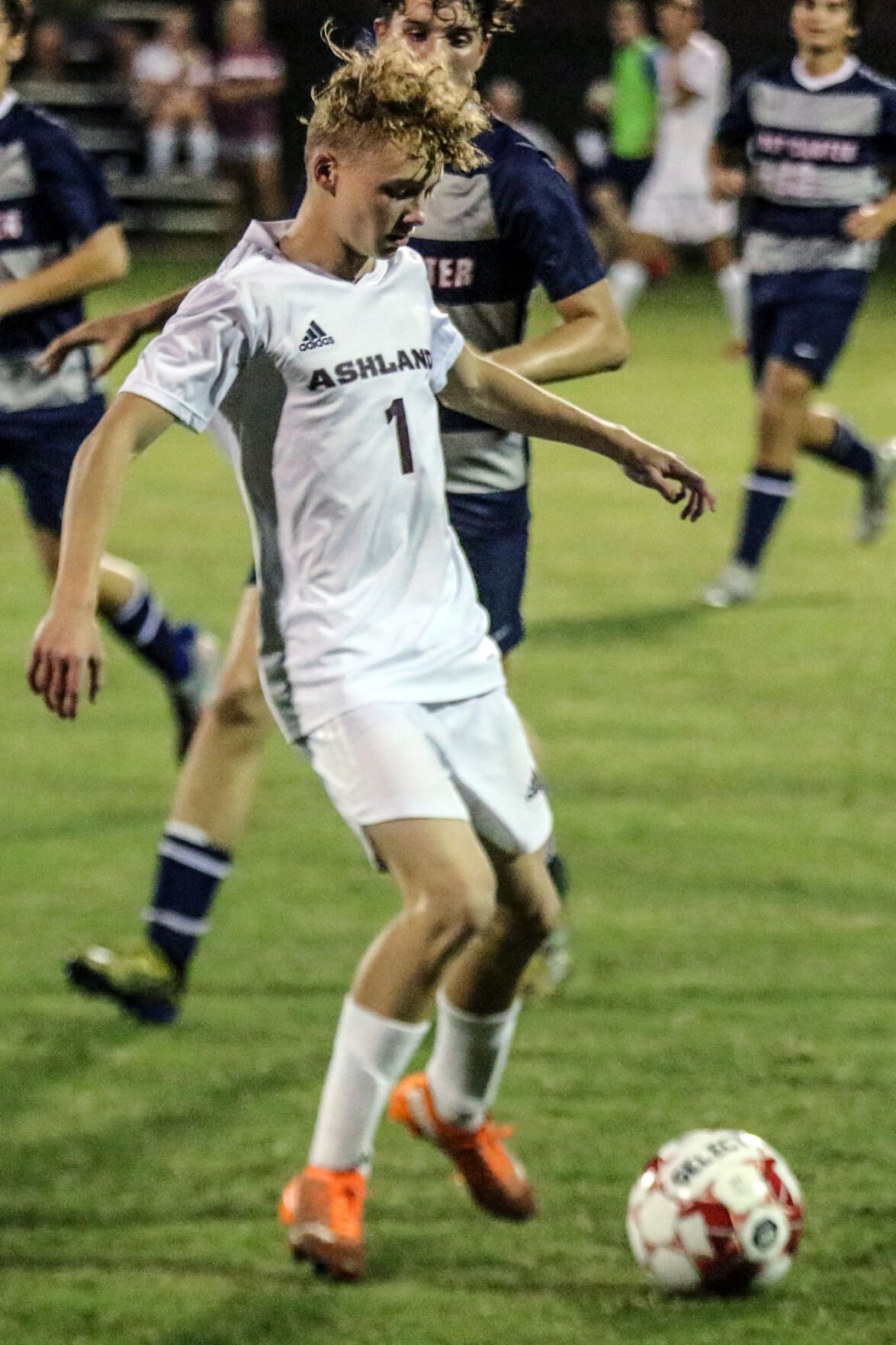 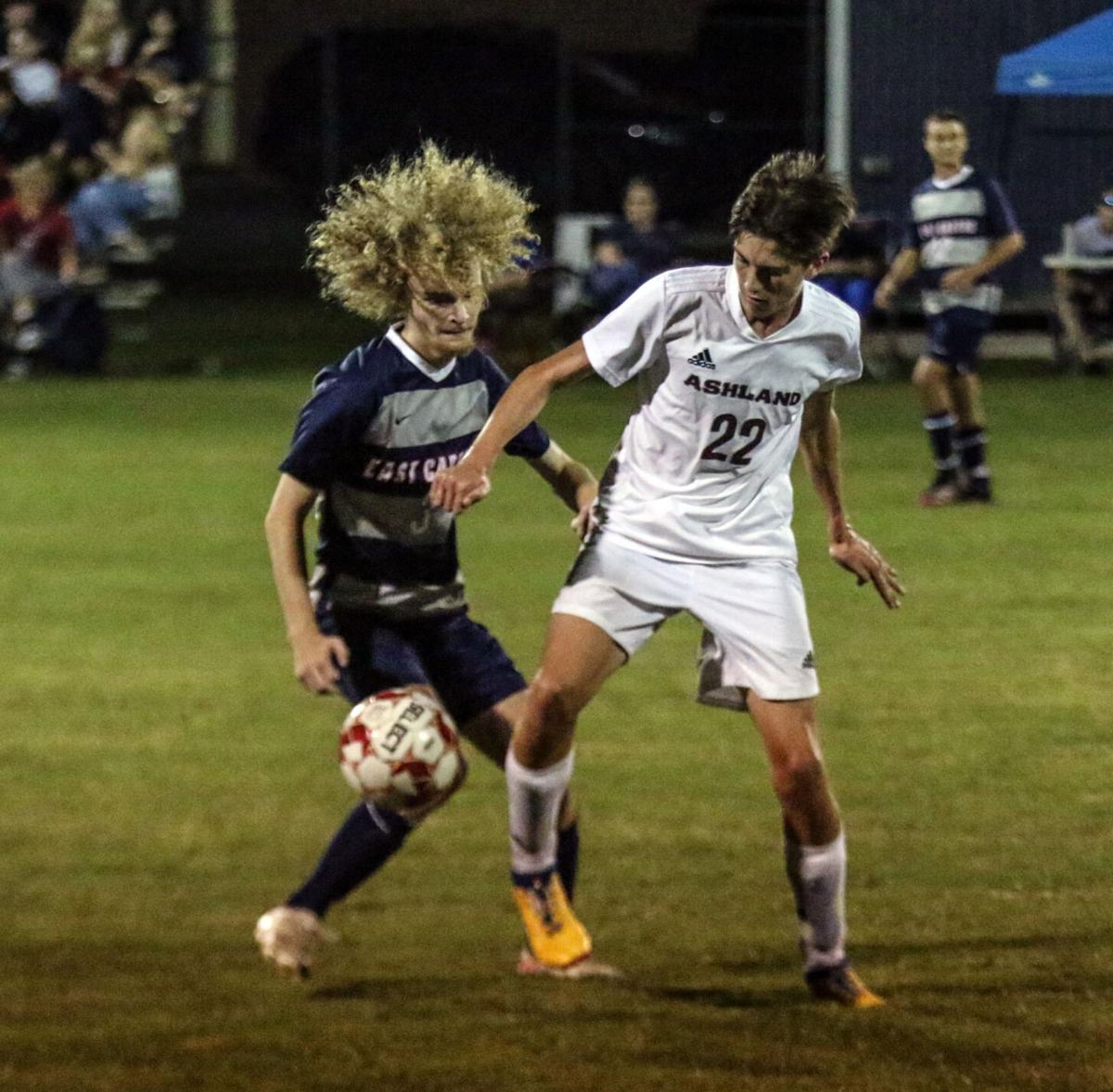 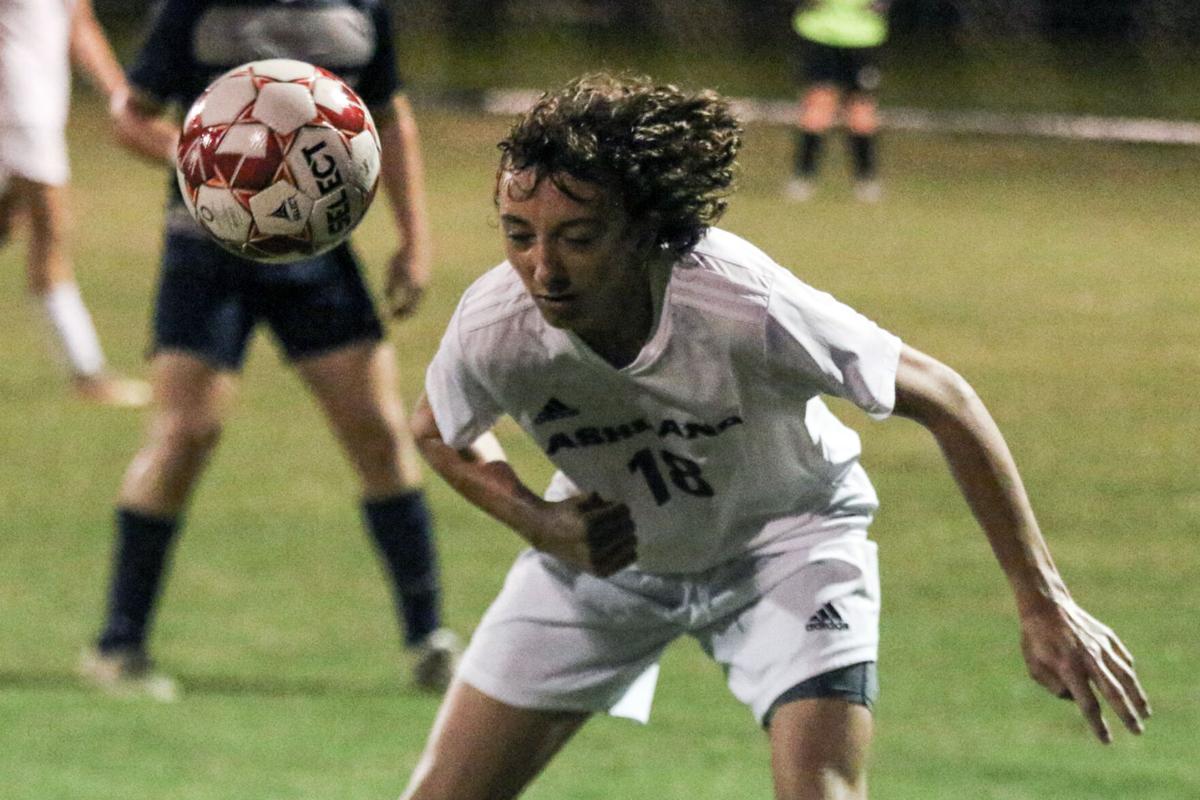 Ashland’s Sam Hicks heads a ball down the pitch during Tuesday’s win at East Carter. MATT JONES | THE DAILY INDEPENDENT 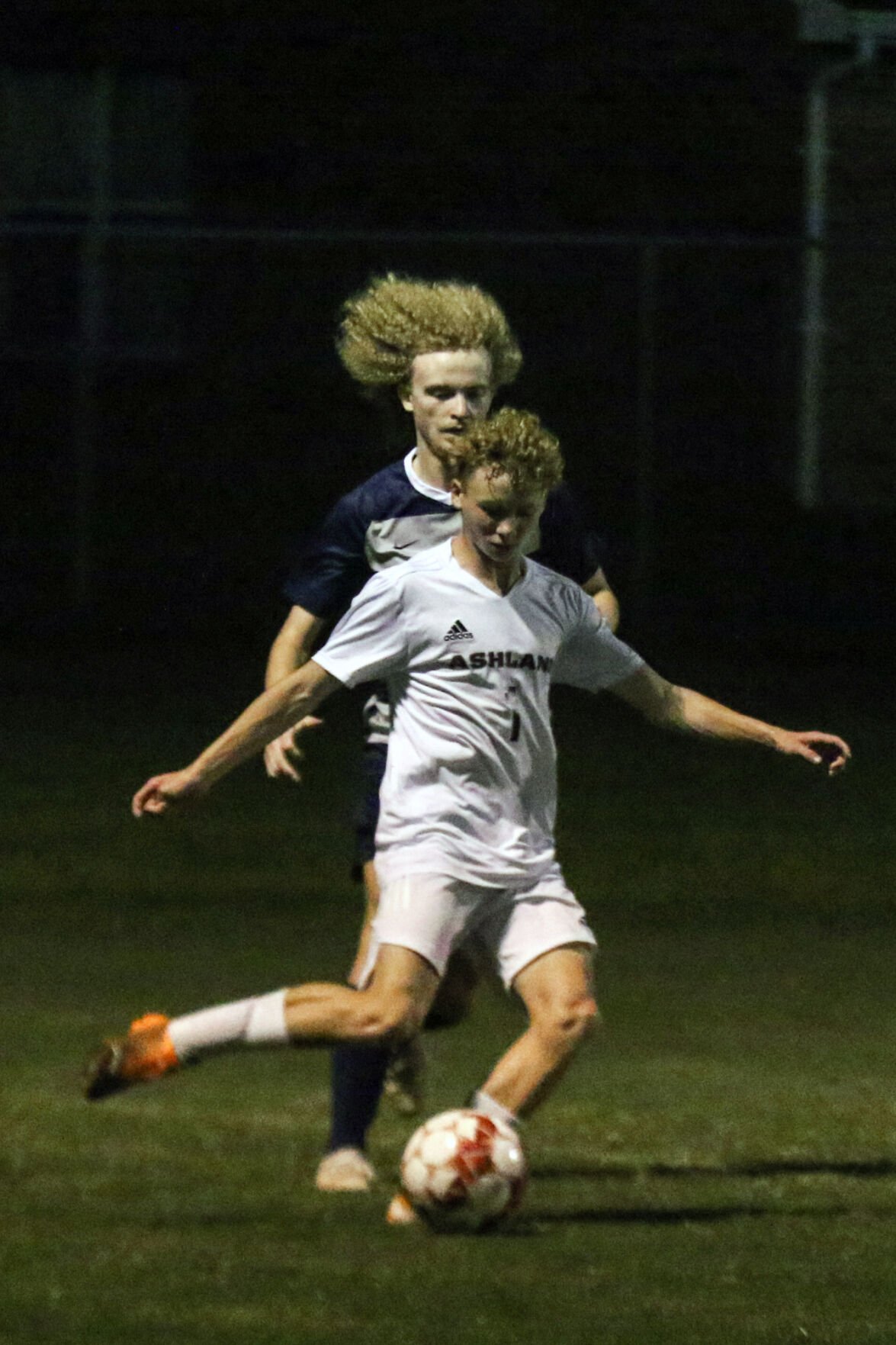 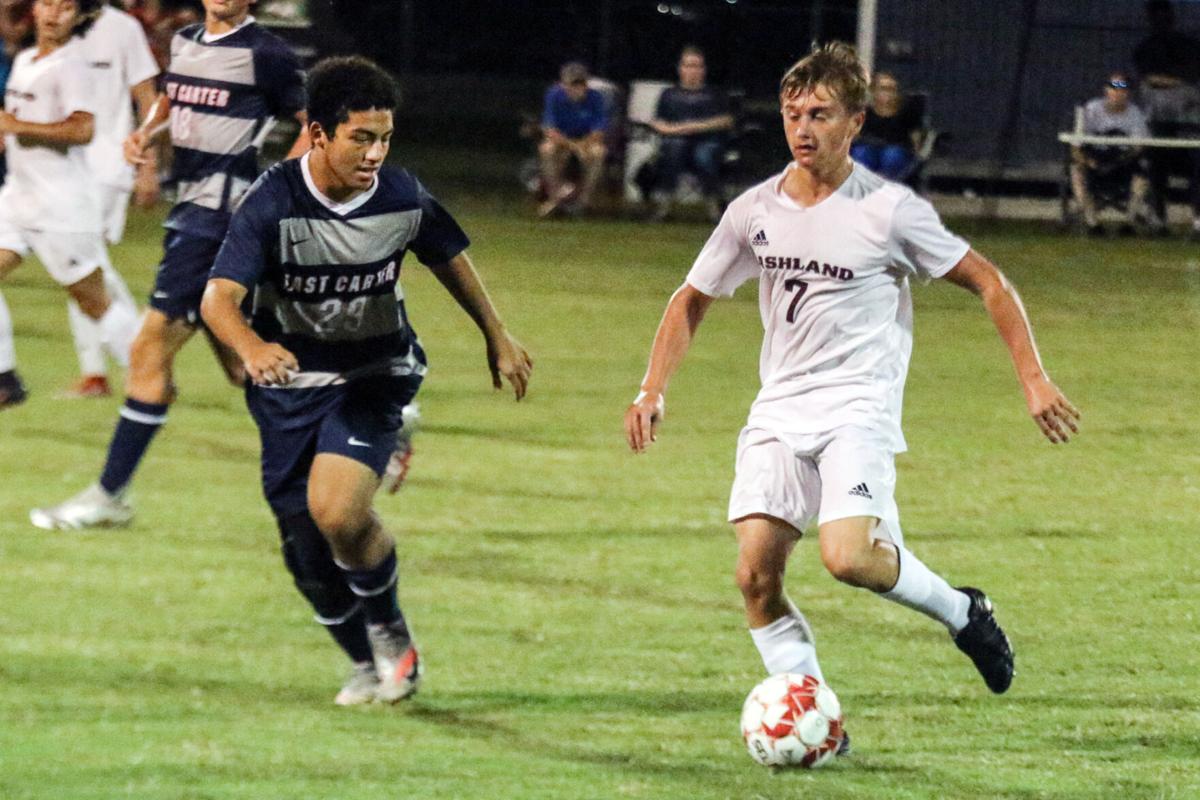 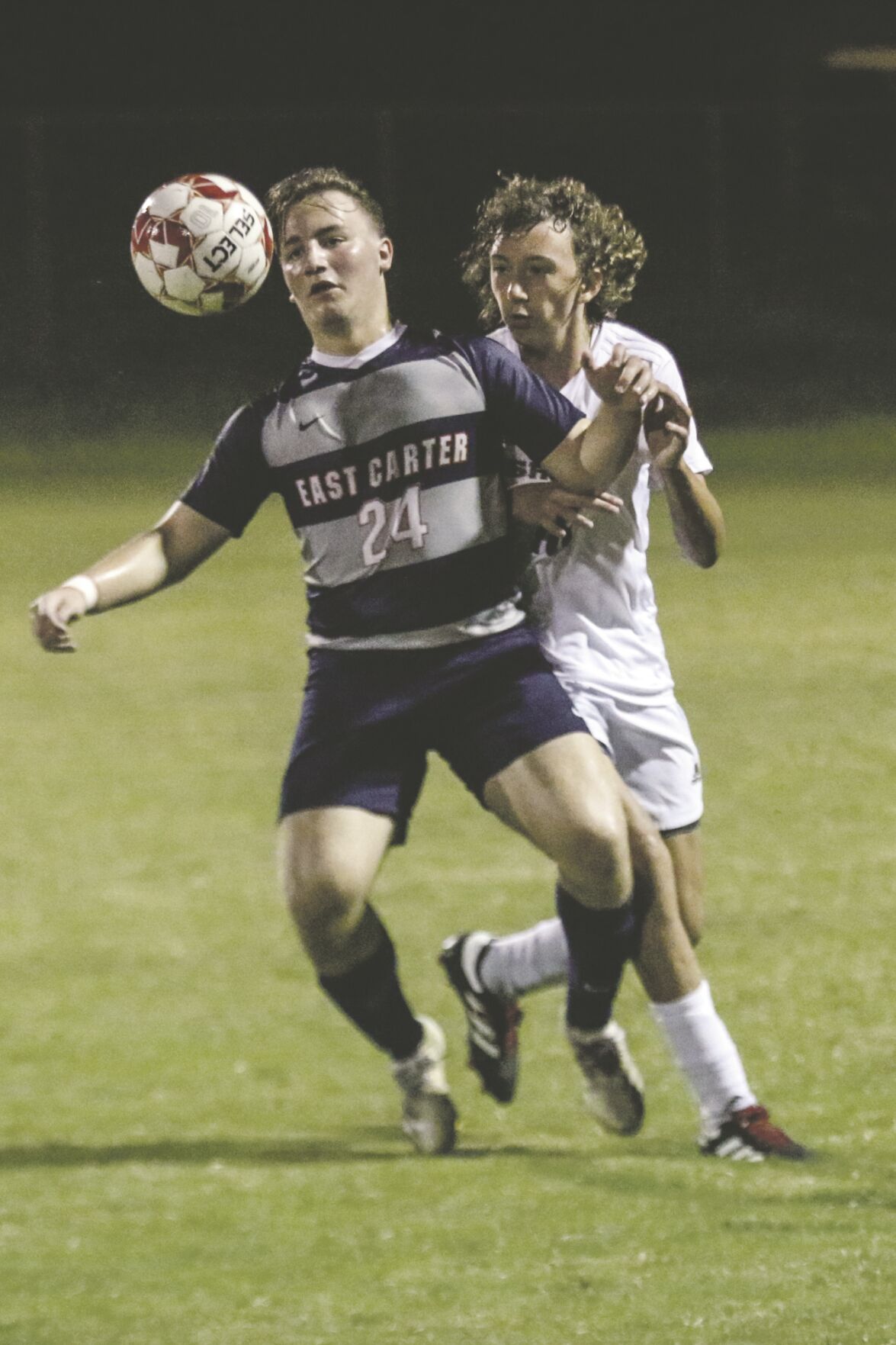 Ashland’s Sam Hicks heads a ball down the pitch during Tuesday’s win at East Carter. MATT JONES | THE DAILY INDEPENDENT

GRAYSON The location for the 16th Region championship rematch was changed 24 hours prior to Ashland’s matchup with East Carter.

The Tomcats arrived at Bill Ticknor Field on a mission Tuesday night and coach Preston Freeman sees his team heading in the right direction.

Ashland grabbed an early advantage and never relinquished it in a 2-0 win over the Raiders.

“It was good win,” Freeman said. “It was a good confidence booster for our team. We’ve had a lot of challenges this year and played some really good teams. The team is coming together. It was unfortunate that we had to take that week off. But we came out and played a decent game against West Carter and (Tuesday night) the focus was fantastic.”

“It was the best focus that we have had this season,” he added. “There was a lot of energy out there. East Carter came out and played hard early in the game. They came out to fight with us. We moved the ball very well.”

East Carter coach Quinn Huddle is searching for more consistency from his club. After a hard-fought victory the night before at Russell, the Raiders could not find enough scoring opportunities.

“We just weren’t ready to play,” Huddle said. “With it being a young and inexperienced group, we kind of took the day off after a big win. It’s something that we will learn. Throughout the course of a season, you will have some ups and downs. Hopefully, this down will turn back into an up and we can get more steady.”

Ashland emerged from a mandatory week off after the school temporarily shut down athletics due to the rise in COVID-19 cases. The Tomcats responded by producing two shutouts and outscored their opponents, 11-0.

“Whenever we play solid in the back, it changes our team,” Freeman said. “It allows our midfield and our attacking guys to play free. When the back line is that focused, it’s hard to beat them.

“We were trying to get them to workout the week that we were off. I trusted that they would put the effort in and get their foot on the ball. They didn’t come back rusty.”

Gavin Maynard got Ashland (5-7-1) rolling early. Just a few minutes into the contest, several players were vying for possession in the box. The ball scooted to Maynard, and he knocked it into the net for his first goal of the season.

“Ashland got on the board early,” Huddle said. “They are a well-coached team. They are organized. We made a mistake. When you make a mistake against a good team, they will punish you. We made two mistakes tonight and they punished us on both. That is what good teams do. Hopefully, if things play out, we get a rematch.”

Huddle believes his team needs time for players to adjust to new roles on the field. East Carter (3-4) played just its seventh match of the season on Tuesday.

“We are trying to get players in positions that are similar with each other,” Huddle said. “It is about players getting comfortable with themselves and one another in the system. I think once they know their role every single night and live up to that role, we will be alright.”

Drew Clark gave the Tomcats separation early in the second half. Parker Miller booted the ball ahead to the junior, and the keeper stepped out to make a play on the ball.

Clark changed direction, eluded the attempt and poked the ball into the empty net. Clark tallied his 13th goal of the season.

Ashland has several scoring options. Maynard became the ninth player to find the back of the net for the Tomcats this year.

“Drew is going to score,” Freeman said. “He has a knack for the net right now. He finds ways to get goals and we are going to keep riding that. At the end of the day, we have a lot of guys that can score. Parker had three assists Monday night and he had another one (on Tuesday). He isn’t scoring the ball, but he is definitely putting guys in great spots to finish.”

“Gavin stepped up for that first goal,” he continued. “We moved him into a midfield position for the entire second half. He held down a spot that was kind of a struggle when East Carter was putting some pressure on us.”