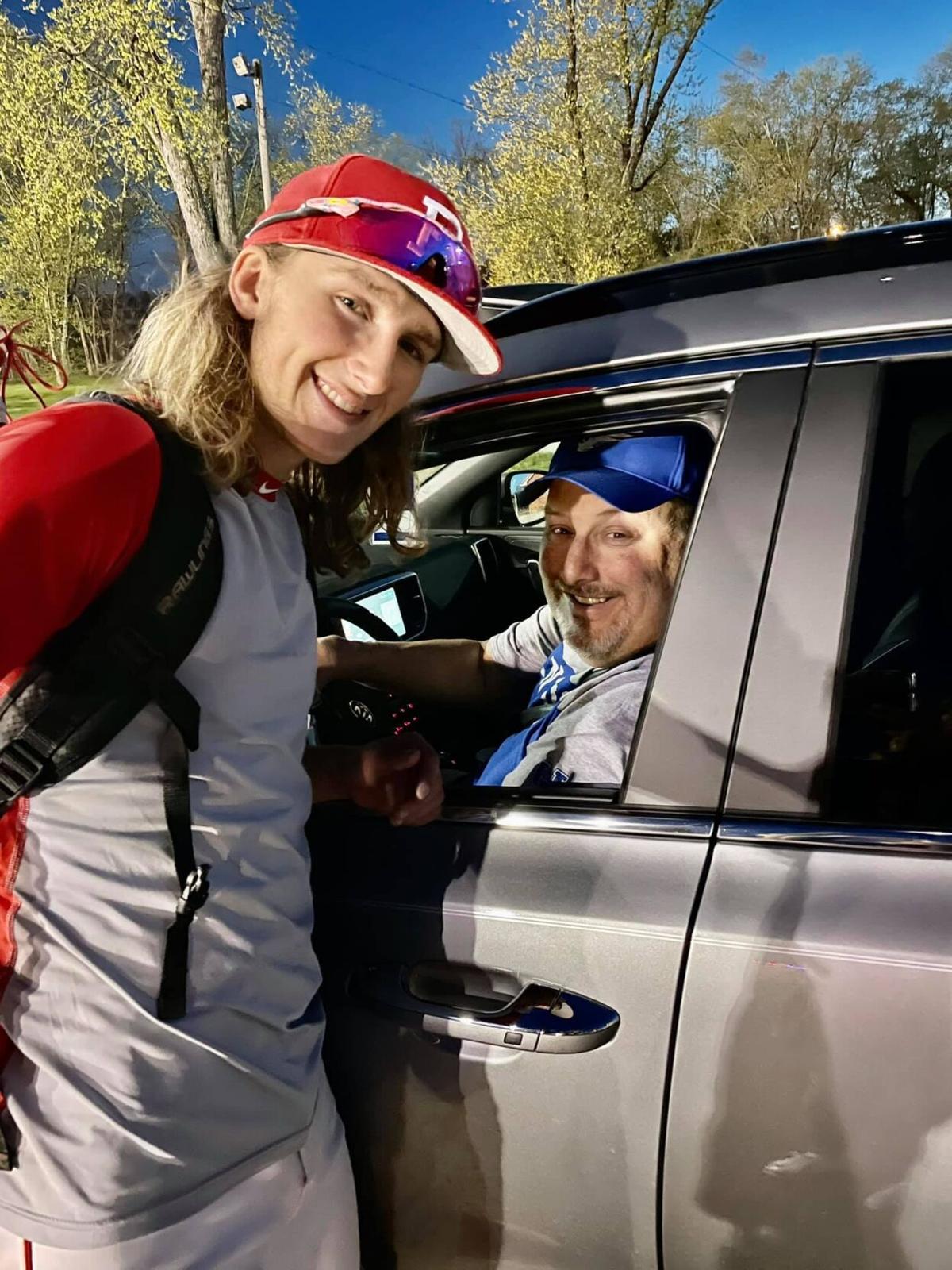 Todd Garvin, right, poses with Boyd County senior Jonny Stevens, his nephew, after the Lions’ victory over Ashland on April 19. 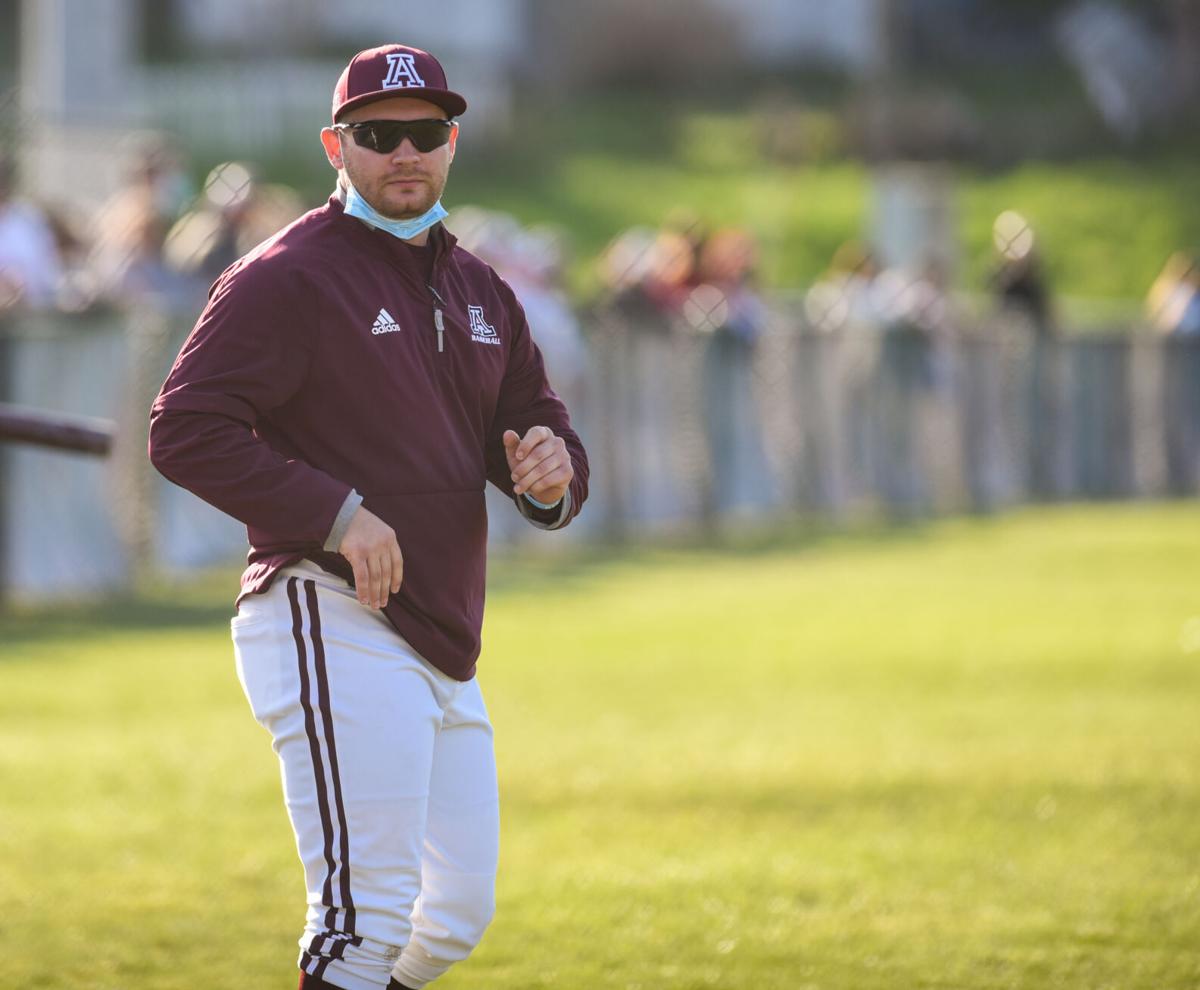 Ashland coach Evan Yongue looks on between innings against Boyd County on Monday at Ashland. MARTY CONLEY/ FOR THE DAILY INDEPENDENT

Todd Garvin, right, poses with Boyd County senior Jonny Stevens, his nephew, after the Lions’ victory over Ashland on April 19.

Ashland coach Evan Yongue looks on between innings against Boyd County on Monday at Ashland. MARTY CONLEY/ FOR THE DAILY INDEPENDENT

Todd Garvin’s trip to northeastern Kentucky last month wasn’t exactly a vacation, he wrote on Facebook, but he found time to watch his nephew play baseball for his alma mater.

Jonny Stevens made it worth his time. Garvin’s nephew scored the game-winning run for Boyd County in a dramatic 5-4 extra-inning victory over Ashland on April 19. The Lions rallied from a 4-0 deficit halfway through the sixth inning to beat their archrival.

As it turned out, that was Garvin’s last trip home. “Fish,” a sportswriter and page designer at The Daily Independent for about a decade in the 1990s and 2000s, died Thursday — 10 days after watching Stevens ply his trade at Addington Field — at 53 in Myrtle Beach, South Carolina, where he had lived and worked since 2007.

Garvin was found dead of a suspected heart attack during a welfare check after not showing up to work that day, said Mark Maynard, for whom Garvin worked at what was then called The Independent.

The intersection of sports and family was surely meaningful to Garvin, a Catlettsburg native and 1985 Boyd County graduate who competed in football and wrestling for the Lions.

Garvin closely followed the sporting exploits of his family back home. He posted on social media about distance-running niece Havanna Kirk signing a letter of intent with Georgetown College and Stevens’s pitching dominance, which included a no-hit shutout and 17 strikeouts against Raceland on April 6, followed by 15 punchouts in six innings of one-hit scoreless ball against the Tomcats six days later.

Stevens held a 0.75 earned-run average with 39 strikeouts, nine walks and just five hits allowed in 18 2-3 innings of work leading into this weekend’s Boyd County Derby Classic. He added 14 strikeouts against Pikeville in a no-decision Friday night in his first outing since his uncle’s passing.

That would have had Garvin bursting with pride, according to his former boss.

“Jonny had no bigger fan than his uncle,” Maynard wrote, adding later, “Fish was a bigger-than-life personality who lived life on his own terms. He’s gone way too soon, but nobody could ever say he got shortchanged. Not too many people I know who enjoyed life as much as he did.”

• Raceland’s softball team played five games in a span of about 20 hours last Saturday and Sunday in the state All “A” Classic in Owensboro, then had a roughly 4-and-a-half-hour drive home before a 63rd District seeding game against Russell on Monday.

“It’s a tough turnaround,” Lady Rams coach Robbie West said by phone from the Bluegrass Parkway Sunday night. “We were eating dinner Saturday night at midnight and had to get up first thing (Sunday) morning and play. ... A lot of the girls are used to that. It’s kind of like playing in a travel ball tournament.”

It seemed like jumping out of the proverbial frying pan and into the fire, with the well-rested Lady Devils awaiting Raceland back home, but the offensive prowess the Lady Rams displayed in scoring 43 runs in 23 innings of offense at Jack C. Fisher Park en route to the small-school state semifinals carried over.

Raceland knocked off Russell, 10-0, in five innings to get back into the ultra-competitive 63rd District seeding race after losing its district opener to Lewis County.

That was only supposed to be the beginning of a pivotal week for the Lady Rams, but their game Wednesday against Ashland was postponed and their encounter Thursday with Greenup County was washed out.

• As usual, the 63rd District shapes up as the most competitive softball district, one through four, in the 16th Region. If the weather and coronavirus cooperate, this week will be akin to what the golf community calls “moving day” in tournaments.

Lewis County goes to Russell on Tuesday, Greenup County visits Raceland on Wednesday, the Lady Rams come calling on the Lady Devils on Thursday and the Lady Lions go to Raceland on Friday.

Lewis County is 3-0 in district seeding, while Greenup County and Raceland are both 1-1. Russell is 0-3.

The Raiders (8-2) are scheduled to Lawrence County today and Greenup County on Wednesday before going to Prestonsburg on Friday.

• For Hampton and Conley, their first softball victory was not their first varsity coaching win.

Hampton is the winningest boys basketball coach in Lewis County program history. The Lions won 279 games under Hampton from 1999-2020, after which he retired from coaching — which didn’t stick.

Hampton called the feeling of his first win in the dugout “totally different” than his first one on the sideline — a 64-51 Lions victory at Fairview on Dec. 28, 1999.

“In basketball, as an unproven and much younger coach that started the season 0-7, I felt like we were building the plane as we were flying it. Getting that first win was a huge relief,” Hampton said. “The first win in softball was just as enjoyable because it came against a quality team that took us to extra innings, but in this case I felt like I just had to hit the auto-pilot button and let the players do what they do. As young as this team is, there is still a lot of experience on the roster and that is something you cannot replace.”

Conley has led Morgan County’s girls soccer team since its inception in 2014. The Lady Cougars have won 34 games under his stead.

• Seven of the aforementioned coaches are in their first season in that role, but not their first year.

Yongue, Harper, Gibson, West, Beek, Hampton and Conley were all set to take over in 2020, but what would have been their first season was lost to the pandemic. The extra year before taking the field in earnest made Yongue appreciate it more, he said.

“I’ve been chomping at the bit ever since last year,” Yongue said in the preseason. “I took it as another year of preparation, another year to get all that administrative stuff under my belt, another year to build the program up, another year to focus on what our vision is and what we need to do to be top-tier in the 16th Region.”

• To Amir Garrett, the Reds-Cubs dust-up on Saturday afternoon may have been just another case of his mixing it up with a division rival, which the Cincinnati reliever has made more or less a habit. But this one had area connections.

Bally Sports Ohio’s telecast showed Holbrook telling Chicago to stay in its dugout, then exasperatedly looking back the other direction as the Cubs didn’t listen.

Holbrook and his crew — with significant assistance from the Reds’ Mike Moustakas and Tyler Stephenson — got things under control without ejections.

• Gov. Andy Beshear pulled back Kentucky’s mask mandate for outdoors events with 1,000 or fewer attendees, effective last Tuesday. The KHSAA quickly adopted the same stance, announcing Monday it would “immediately remove the mask requirement at outdoor events with less than 1,000 attendees” it still had in place for coaches, players not in the game, officials, fans and administrators.

Call it another step toward the normalcy so many are craving.