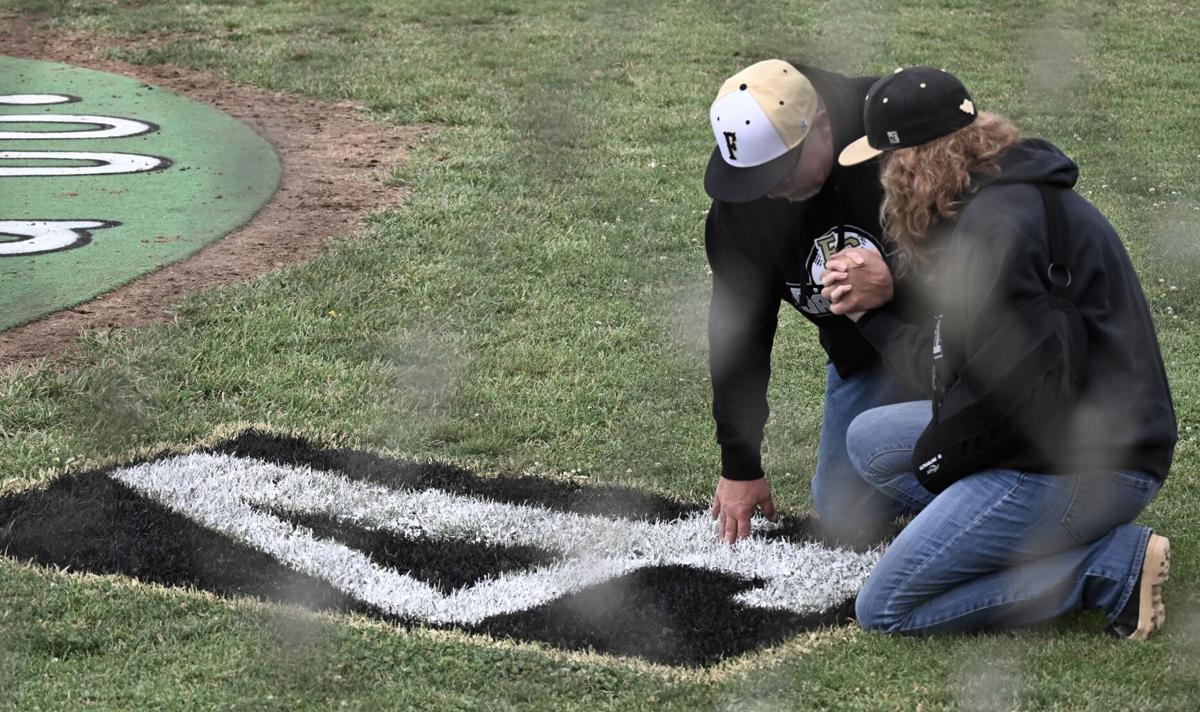 Steven and Stephanie Morgan, parents of late Fleming County senior catcher Buddy Morgan, spend a moment with the tribute to their son painted behind the plate at Panther Field after the Panthers’ 4-0 victory over Bath County in the 61st District Tournament semifinals in Flemingsburg on Sunday. 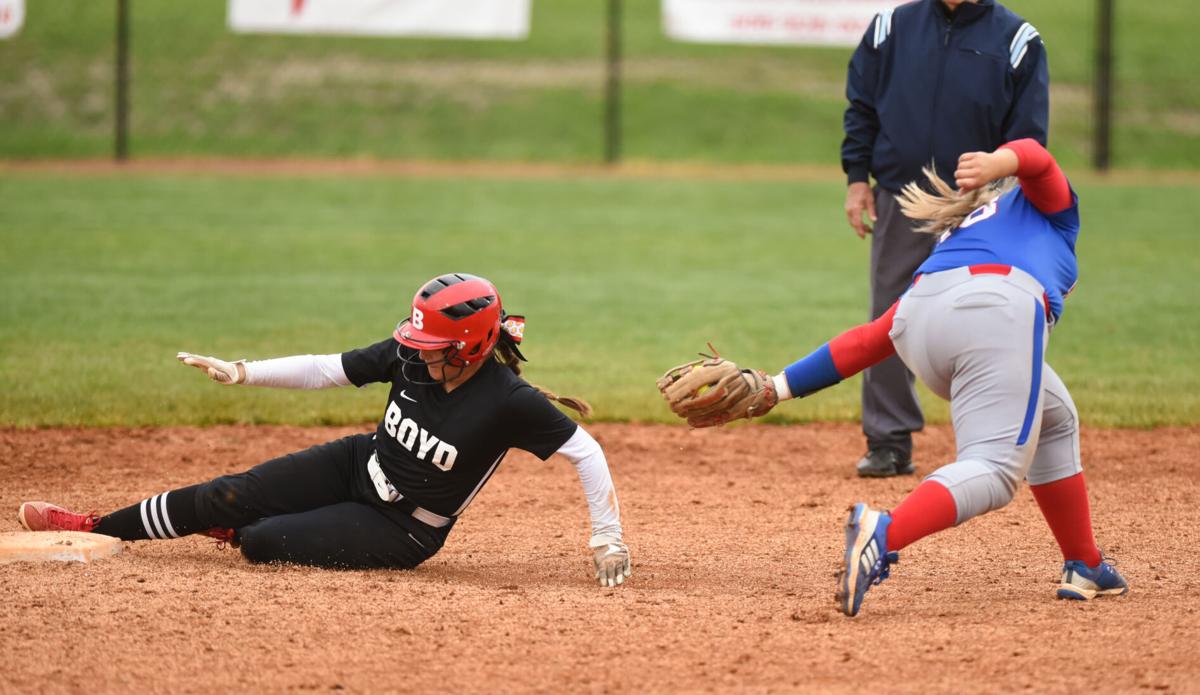 Boyd County's Alex Blanton makes it safely to second in front of the tag of Mercer County's Brooklin Burgess on Saturday at Boyd County. MARTY CONLEY/ FOR THE DAILY INDEPENDENT 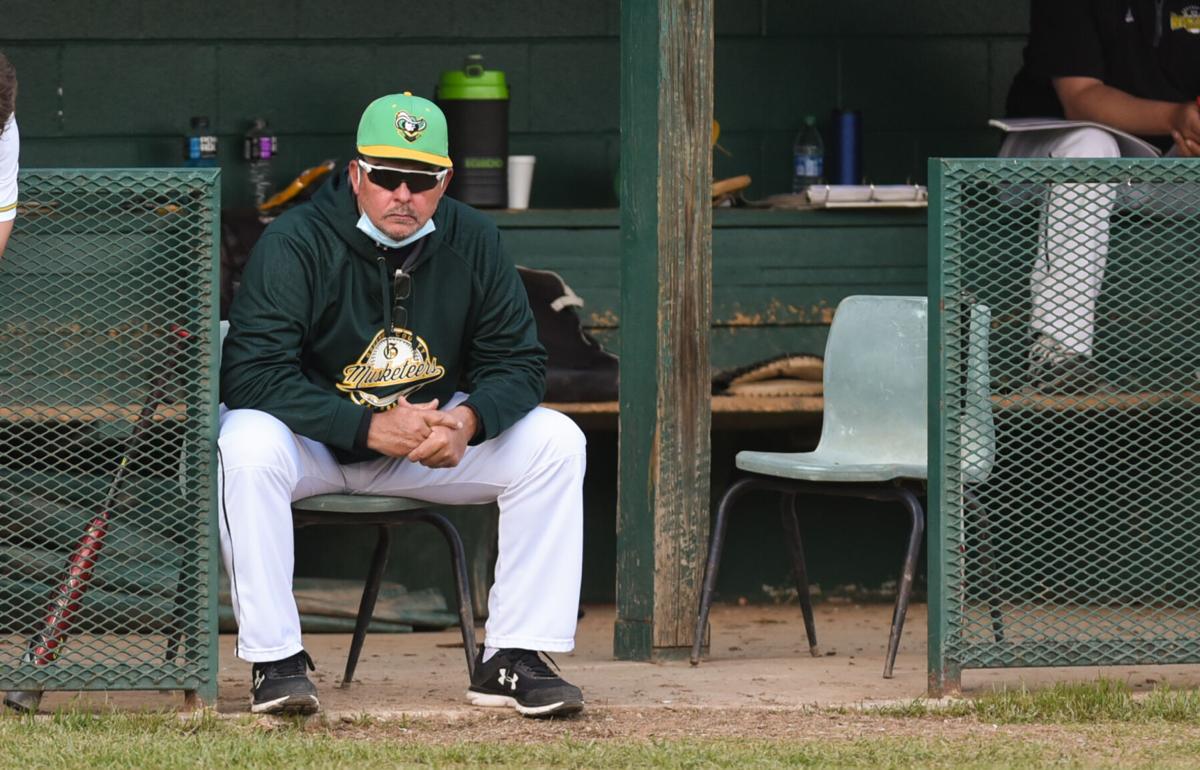 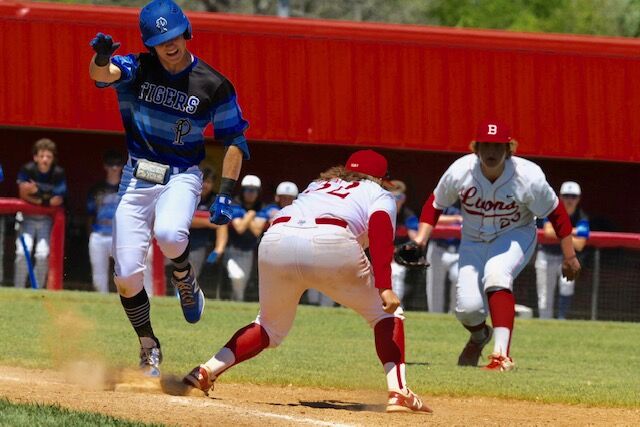 Paintsville's Jonah Porter beats the throw from Boyd County's Gunnar Gerahart to Peyton Jackson at first base on Saturday.

Steven and Stephanie Morgan, parents of late Fleming County senior catcher Buddy Morgan, spend a moment with the tribute to their son painted behind the plate at Panther Field after the Panthers’ 4-0 victory over Bath County in the 61st District Tournament semifinals in Flemingsburg on Sunday.

Boyd County's Alex Blanton makes it safely to second in front of the tag of Mercer County's Brooklin Burgess on Saturday at Boyd County. MARTY CONLEY/ FOR THE DAILY INDEPENDENT

Paintsville's Jonah Porter beats the throw from Boyd County's Gunnar Gerahart to Peyton Jackson at first base on Saturday.

In baseball parlance, a particularly effective curveball is known as “knee-buckling,” because hitters looking for a different pitch see its unexpected break and literally physically waver.

Fleming County’s baseball coach had just sent the Panthers on their running regimen to begin practice Friday morning — an atypical time for a team workout, one chosen by Fleming County’s players because they are out of school for the summer — when his phone rang at 9:02 a.m.

On the other end was Steven Morgan, the father of two Panthers, brothers Buddy and Hoss, who were in a bad auto accident on the way home from Buddy’s Senior Day game 13 days earlier.

Steven informed his sons’ coach that Buddy, 18, one day away from his high school graduation, had died from those injuries in the hospital in Lexington.

“When Steven told me, I just squatted down,” Hart said Friday night. “I had no idea that it was anywhere near that bad right now.”

Indeed, regular Facebook updates from Morgan’s mother, Stephanie, had seemed to indicate Buddy was progressing, though a long road remained. But surgery to repair his broken pelvis was halted Monday due to a blood-clotting issue, Stephanie wrote, and it was never resumed.

Low blood pressure, bleeding, a struggling liver and a collapsed lung were issues in the ensuing days until Buddy died at 8:52 a.m. Friday, Stephanie posted.

Hart got the call exactly 10 minutes later, passed the news on to Fleming County principal Stephanie Emmons and then called the Panthers back from running poles to home plate.

That wasn’t random nor a coincidence. The plate is where Buddy Morgan, Fleming County’s senior catcher, plied his trade.

After informing his team of Morgan’s passing, Hart gave the Panthers three options, he said — sit in the dugout and talk, practice or go home.

“And they said that Buddy would definitely want us to practice,” Hart said. “It was probably one of the best practices we’ve had all year.”

The Panthers built upon that for a 4-0 victory over Bath County in the 61st District Tournament semifinals on Sunday.

Fleming County set up a chair for Morgan at its graduation on Saturday on its football field, where Morgan was also an All-Area performer as a Panthers defensive back and quarterback — a high school career he’d parlayed into signing a letter of intent to play football at the University of the Cumberlands.

The chair was draped in a cap and gown and a Fleming County baseball jersey and hat, along with Morgan’s senior photo.

Morgan’s last game was Senior Day on May 15 at Panther Field, in which he went 2 for 3 and drove in two runs in a 10-6 victory over Morgan County.

If there was any good news for the Panthers and the Morgans last week, it was that Hoss, in recovery from a fractured elbow and heel, has progressed from a wheelchair to a boot and a scooter.

The Lions wore black T-shirts bearing the phrase “NOT ALONE” in white lettering after their 7-6 win over Johnson Central on Tuesday. It’s the same name as the project Hale, a Lions junior, launched in September to bring awareness to depression and suicide prevention — hoping to save people from the same fate that found his cousin when they were both 11.

Donations and a grant funded the production of the T-shirts, which Hale would like to see on people in Boyd County and beyond.

“As many people as we possibly can. The more, the better,” Hale said. “If we can only get the people in the (Boyd County) district, that’s OK, but if we can get more people throughout the state, or even in West Virginia and Ohio, that would be amazing.

“The more people that get the message, the more people we can help if they’re feeling down or maybe see one of their family members is down.”

Hale’s goal is to reach people who are fighting depression and/or suicidal thoughts, but he also wants to help people recognize those signs in others.

“Dalton uses empathy as well as anyone I’ve ever met, and he is 17,” Conley said. “He is a great teammate and consistently puts others before himself. His teammates see that and love Dalton for the way he is. He is a helper and has a way of talking to you so that when the conversation ends, you feel better about things.

“If he can help anyone, whether he knows them or not, he is going to go above and beyond to do that.”

Hale is coming out of his shell, he said, to speak publicly about his project and its aim. It began with the aforementioned personal connection, but he’s since realized how wide-ranging depression’s reach is.

“I knew that a lot of people had struggled with it, but more than anything it’s helped me realize that everyone at some point has dealt with this, to some extent,” Hale said.

• Coaches often try to ensure their players are well-rested entering the postseason. If Travis Feltner believes in that philosophy, Lawrence County’s baseball coach ignored it himself.

Feltner, wife Melinda and Bulldogs assistant Julius Musick trekked seven hours to Jackson, Tennessee, on Thursday to watch Morehead State play in the Ohio Valley Conference Tournament. Following the conclusion of play Thursday night, Feltner and Musick got back on Interstate 40 eastbound and hit Louisa at about 5 a.m. Friday, in time for Lawrence County’s practice ahead of its 58th District Tournament opener Saturday. (Melinda Feltner stayed for the rest of the Eagles’ games in the double-elimination tournament, which concluded with a loss to Austin Peay on Friday.)

As if to add a side order of crazy, Travis Feltner and Musick didn’t even get to see a full game. Morehead State’s contest Thursday with Murray State was postponed overnight in the ninth inning due to rain and finished up Friday, by which time Feltner and Musick were already home and getting the Bulldogs prepared for Betsy Layne.

“Made for a short night of sleep, but it was well worth it,” Feltner said.

Such allowances, of course, must be made when a high school baseball coach wants to watch his son play college baseball, given the inherent time conflicts.

Feltner made it to “nine or 10” Eagles games this season to see his son, OVC Freshman of the Year Jackson Feltner, play, he said — most of them before the Bulldogs’ season started or on weekends when Lawrence County had a light schedule due to spring break or prom.

• Lawrence County won its 300th baseball game under coach Travis Feltner on May 22, a 3-0 victory over Raceland.

“It’s a good thing, obviously. I’d rather have 300 wins than 300 losses,” Feltner said, chuckling. “Been doing it for a while, number one, but the biggest thing is, just had a lot of good kids.”

That includes the present. The Bulldogs carry a 26-6 record, tops in the 15th Region, into the 58th District Tournament final today against Floyd Central.

“I’m not sure that many people had Lawrence County on their mind as far as being a legitimate contender,” Feltner said, “just because nobody knew what kind of personnel we had. And honestly, I didn’t know either, just because we have so many kids that just never had played varsity baseball. ... They’ve worked hard and have risen to the challenge, because we have challenged them mightily.”

• Entering the final day of the regular season on Saturday, three 16th Region softball teams ranked in the top four in the state in batting average, according to statistics reported to the KHSAA website.

If that litany has inflated some stats, in Wheeler’s opinion, one is well-earned: the Lady Lions’ propensity for going deep.

Paintsville’s 2-1 baseball loss at Greenup County on Monday night was its second low-scoring one-run loss to the Musketeers in eight days. Greenup County had previously knocked off the Tigers, 1-0, and two days before the rematch, Paintsville had fallen to Pikeville, 5-1.

“Offensively, we’re not as good as I thought we were,” Crace surmised after the loss in Lloyd. “We’re just not hitting the baseball.”

But that game may have jarred something loose. Paintsville traveled to Danville two days later and lost, 6-3, but that run total qualifies as a veritable windfall against the Admirals, who are 34-3 and allowing 1.5 runs per game.

The next day, the Tigers continued their 12th Region tour by topping 22-win Somerset, 9-1, in their regular-season finale.

• Rowan County baseball’s 11-3 win at Breathitt County on May 24 was its 25th victory of the season. That extended the Vikings’ stretch of 25-or-more-win seasons to five — extending the longest active such streak in the 16th Region.

Shelby County entered postseason play in 2007 at 11-14. The Rockets concluded the year as state runner-up.

“So it’s about, where are we at tournament time?” Logan asked rhetorically. “I think we’re pretty good. We’ve been 34-2 and you get upset. Strange things can happen.”

The 16th Region champion will meet the 14th Region winner, and the 15th Region titleist will oppose the 12th Region champ in the semi-state round at John Cropp Stadium in Lexington.

The victors in those two games will then meet in the state quarterfinals.

• In state baseball action, the winner of the semi-state round between the 16th and 13th Region champs will meet the victor from the matchup of the Third and Second Region winners.

Whomever emerges from the 15th/14th Region semi-state will take on the Louisville semi-state champ, as the Seventh and Sixth Region titleists meet there.

Sorry, there are no recent results for popular images.