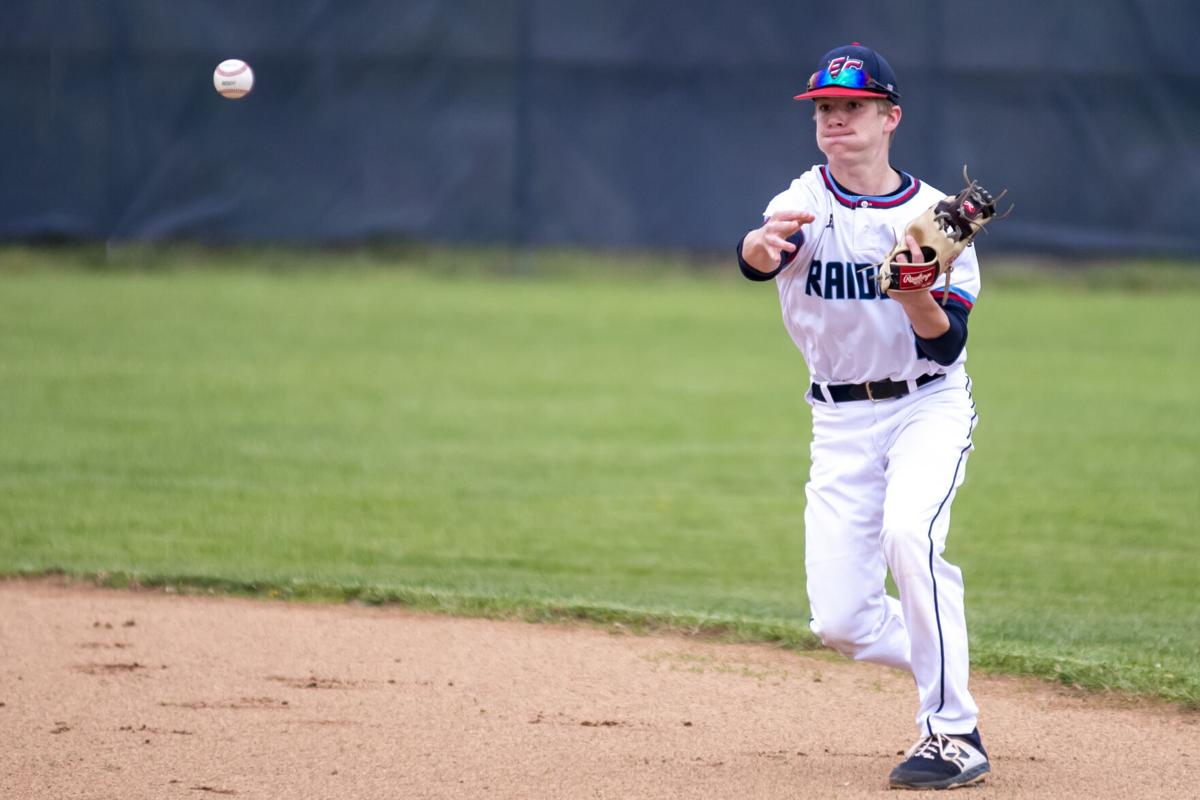 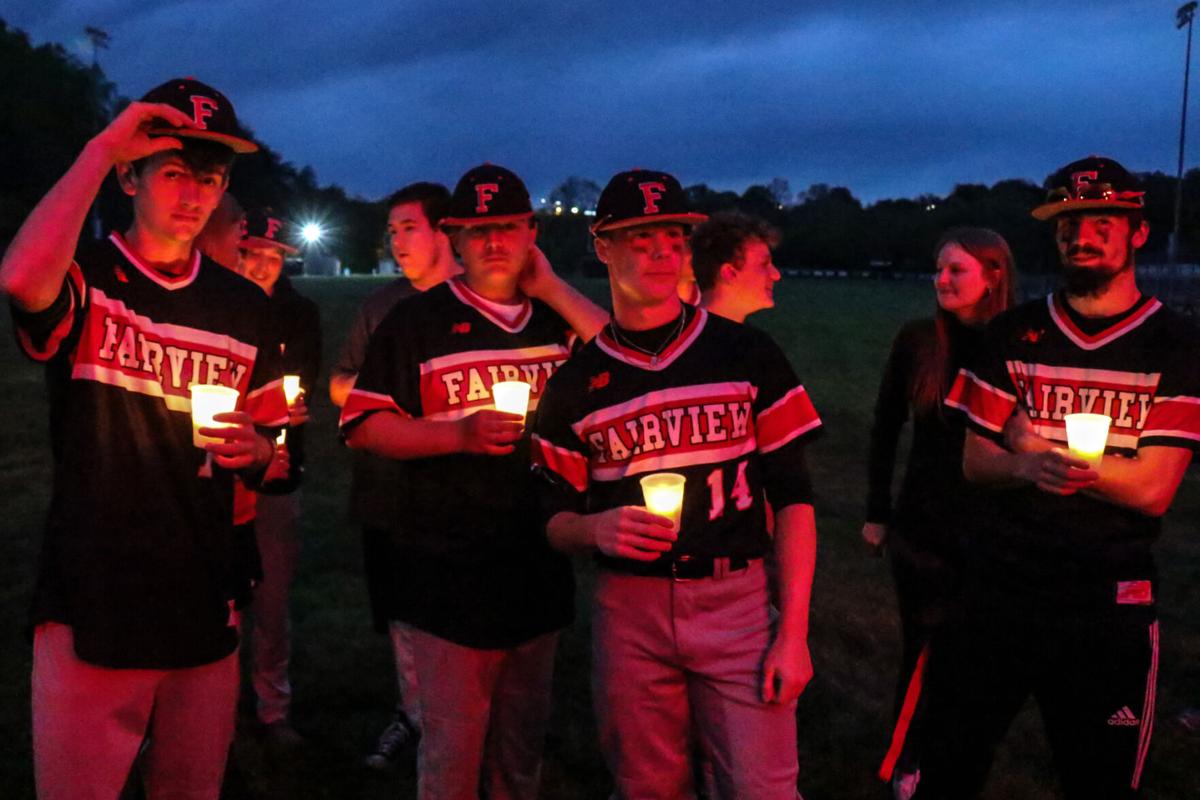 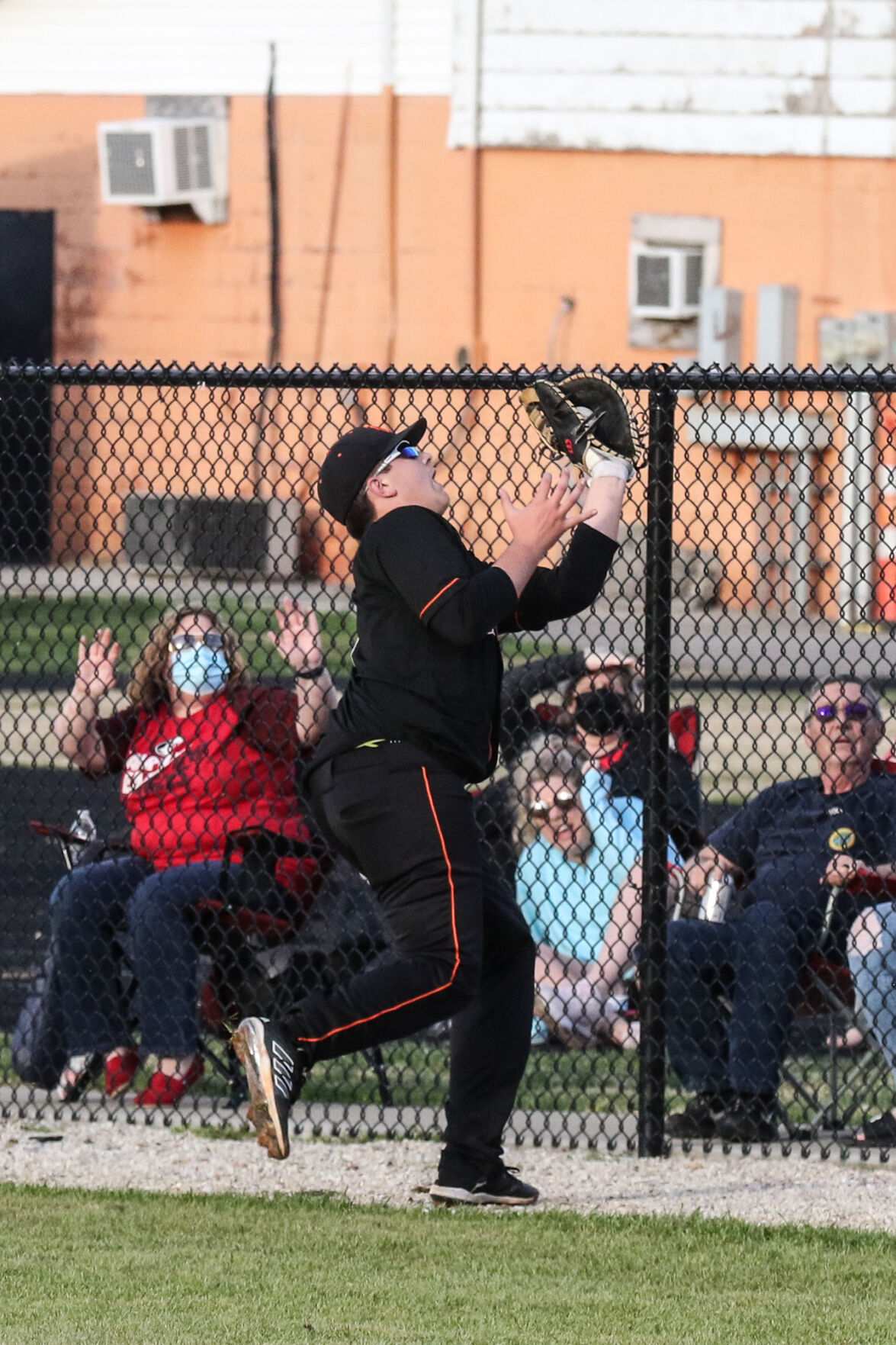 Raceland’s Colton Holman tracks down a ball in foul territory in the second inning of Tuesday’s win over Raceland.

Raceland’s Colton Holman tracks down a ball in foul territory in the second inning of Tuesday’s win over Raceland.

Jeremiah Shearer declined to take one iota of personal credit for East Carter baseball’s 1,000th victory, or any of the ones that led up to it.

Never mind that he’s been present and in uniform for almost all of those wins since 1987 or so.

Rather than accepting accolades, Shearer pointed to the strength of the Raiders’ feeder system, quality of their assistant coaches and talent on the field.

He did call coaching continuity a bedrock of East Carter’s program, though, so it seemed fitting the Raiders’ 5-1 victory over Coal Grove on Thursday that allowed them to hit the 1K mark was also their 300th win under Shearer’s direction.

Shearer is only East Carter’s third coach in 50 years, following the legendary Jack Calhoun and J.P. Kouns. He was more or less destined to play a significant role in Raiders history.

Shearer’s father, Morris, was Kouns’s best friend growing up and served on his staff, so Shearer has been a mainstay in the stands, on the field or in the dugout wherever the Raiders play ever since he can remember.

“From the time I was old enough to be on a baseball field, I was around the program. I can remember taking spring break trips and bus trips to who knows where,” Shearer said, adding with a chuckle, “Got to witness lots of good postgame speeches.”

Shearer came on board as a bat boy at age 9 or so — three years after his first baseball memory, which was watching the Raiders win the state championship in 1984.

He suited up in navy himself until graduating in 1996, then departed from the Raiders for the first and only time since his childhood — to spend four years at Alice Lloyd.

Shearer came straight back to Grayson, joining Kouns’s staff for the 2001 season, and took over as head coach four years later. Under his lead, East Carter has continued a pace of an average of just over 20 wins a season since their 1972 inception.

The Fairview football scoreboard was lit up with “44” — Brewer’s jersey — and “2013” — the year of his graduation. The service included Brewer’s former coaches and teammates taking one more length-of-the-field walk, as the Eagles do after games.

Two of the offensive linemen who cleared the way for Brewer and the state’s record-holding rushing offense in 2012 led No. 44 down the field once more. Cody Sammons — now Fairview’s baseball coach — and Cody Campbell carried Brewer’s jersey.

• Not much has come easily for Ashland’s baseball team this year, including its signature win on Wednesday.

The Tomcats trailed Rowan County, riding a 28-game winning streak against 16th Region opponents, 3-0 before they even batted. No sooner did they scratch across the game-tying run in the bottom of the seventh — having finally gotten out from under the thumb of the Vikings’ Chase Alderman, who no-hit them for six innings — before Rowan County rattled off three more runs in the top of the eighth.

Which, oddly enough, is exactly what coach Evan Yongue wanted.

“We’ve been needing something like this,” Yongue said. “We have a super tough schedule, so every game that we have is gonna be a dogfight, and it’s easy to get down when it doesn’t go your way, but they showed resilience and they showed toughness and they showed what they’re capable of.”

Ashland battled back to win, 7-6, on Asher Stevens’s walk-off RBI hit. The Tomcats handed Rowan County its first region loss since early in the 2019 season.

“I think it’s exactly the switch that we needed for us to continue to move forward,” Yongue said. “We know that we can contend within the region now.”

• Two nights before knocking off Rowan County, Ashland participated in a game even rarer than beating the defending region tournament champions.

The Tomcats used a 16-run third inning to come from behind and jump-start a 25-14 win at West Carter.

In the 11 days before its trip to Olive Hill, Ashland had been no-hit twice in shutout losses to Rowan County and Pikeville and scratched across only one run in a victory at Fairview. The Tomcats emphatically broke the logjam with what Yongue cracked was “a fourth-grade basketball score.”

The offensive output included a pinch-hit grand slam by eighth-grader Colin Howard on the first pitch he saw in his varsity career. Yongue admitted some reservations in sending Howard into such a situation, but Ashland needed a spark, the coach said, and Howard provided it.

Ashland’s offenses posted particularly prolific frames that day. The softball Kittens tallied 15 runs in the second inning of a 16-0 win over Fairview.

That gave Fairview six wins this season. The Lady Eagles have surpassed their 2019 victory total (four) with 17 regular-season games remaining on the schedule, even without a single returning starter from two years ago.

“Such a young and inexperienced team,” Fairview coach Bruce Gibson said. “But I honestly think they have a chance of pulling out a winning season. Only time will tell.”

• Raceland’s softball team cracked the door open for itself — as well as Greenup County and Russell — in 63rd District seeding by knocking off Lewis County, 4-2, on Friday.

The Lady Lions would have clinched at worst a tie for the top seed with a win. The Lady Rams were intent on preventing that, at least for the time being, but they noted something else: they’d lost their last two games to Lewis County — a 7-4 Lewis County win on April 19 and a 12-9 Lady Lions victory in the 2019 district tournament final.

Lewis County hadn’t beaten Raceland twice in a row since at least 2002, which was when the KHSAA began keeping comprehensive online records.

“The girls were upset after we left Vanceburg a few weeks ago, and it was a quiet bus ride home,” Lady Rams coach Robbie West said of that April 19 loss, “but I told them, it’s no big deal. They’ve gotta come back to Raceland to play.”

Lewis County and Raceland are now tied atop the district standings at 3-1. Greenup County (1-2) and Russell (0-3) could still catch up, too.

The 63rd’s two-way tiebreaker — should such a scenario unfold — is a coin toss, Raceland athletic director Tom Collins said.

• Raceland’s baseball team clinched the top seed in the 63rd District Tournament with a 5-0 victory at Russell on Monday.

The Red Devils, who started 3-1 in seeding play, slipped into a tie for No. 2 with Greenup County due to a 7-6 loss to the Rams on Tuesday.

The tie will be broken by a coin toss. It has no impact on the matchups, but it will determine who bats last in the Musketeers-Red Devils district tournament semifinal.

• Menifee County’s Karlee Willoughby picked up her first victory as a varsity softball coach on Thursday when the Ladycats beat West Carter, 17-14, in Frenchburg.

It was a battle of the only two winless teams in the 16th Region. Menifee County had been 0-10 and the Lady Comets fell to 0-19. They are scheduled to meet again May 20 for a doubleheader in Olive Hill.

• The schedule for the 64th District softball tournament is set. Second-seeded Boyd County meets No. 3 Fairview on May 31 at Ashland. The winner advances to play the host Kittens on June 1.

Ashland, by virtue of its top seed, drew a bye to the district tournament final and became the first team into the 16th Region Tournament field.

• The KHSAA Board of Control voted Wednesday to approve Morehead State’s John “Sonny” Allen Field as the site of Semi-State 7 and 8 baseball this season.

This is particularly noteworthy because the 13th Region champion is the designated host school against the 16th Region winner in Semi-State 7.

But that game will take place in the 16th Region and potentially a four-minute drive from the home field of the 16th Region champion, if Rowan County defends its championship.

There are two colleges in the 13th Region footprint — the University of the Cumberlands and Union College — but their facilities are likely regarded as insufficient to host such an event, especially with social distancing imperatives in play.

"We have not been approached by anyone to have their facilities considered," KHSAA spokesman Joe Angolia said. "In addition to availability in conjunction with our postseason schedule, we have to consider the site's ability to manage fan admission."

The champions of the 15th and 14th Regions will meet in Semi-State 8.