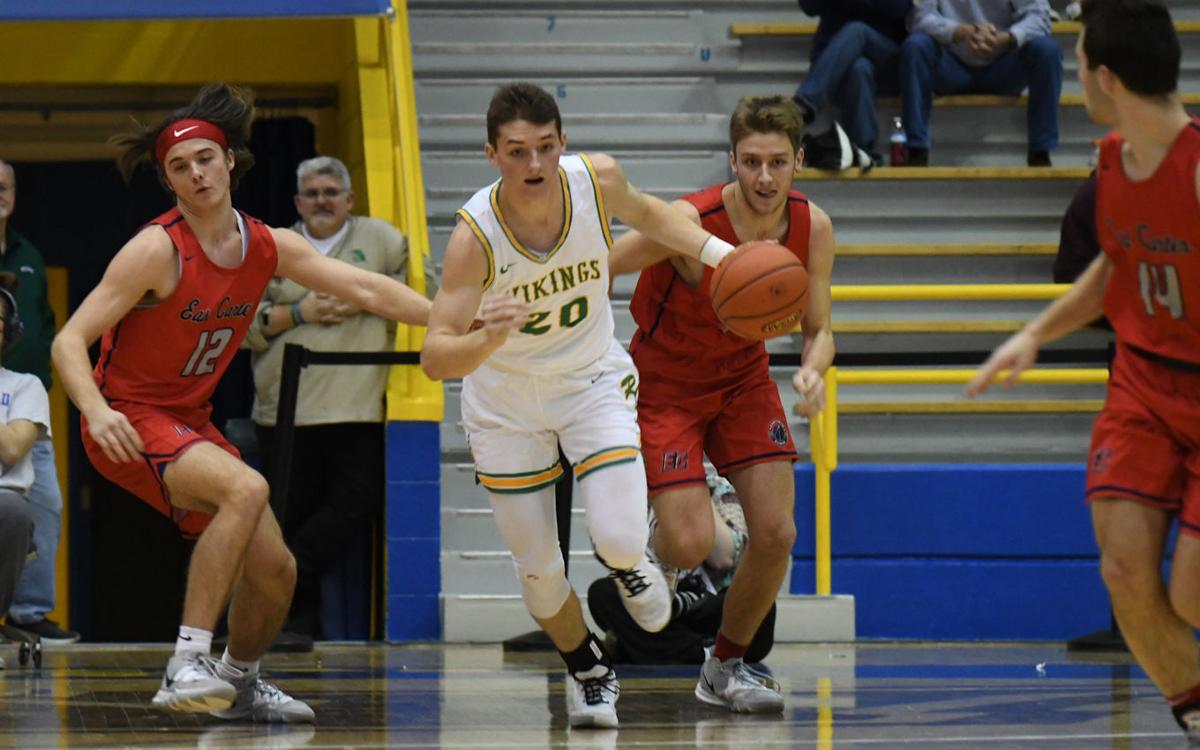 Rowan County's Mason Moore takes off in transition against East Carter during the 16th Region Tournament at Morehead State University on Mar. 5, 2020. The Vikings senior has signed a letter of intent to play baseball at the University of Kentucky. 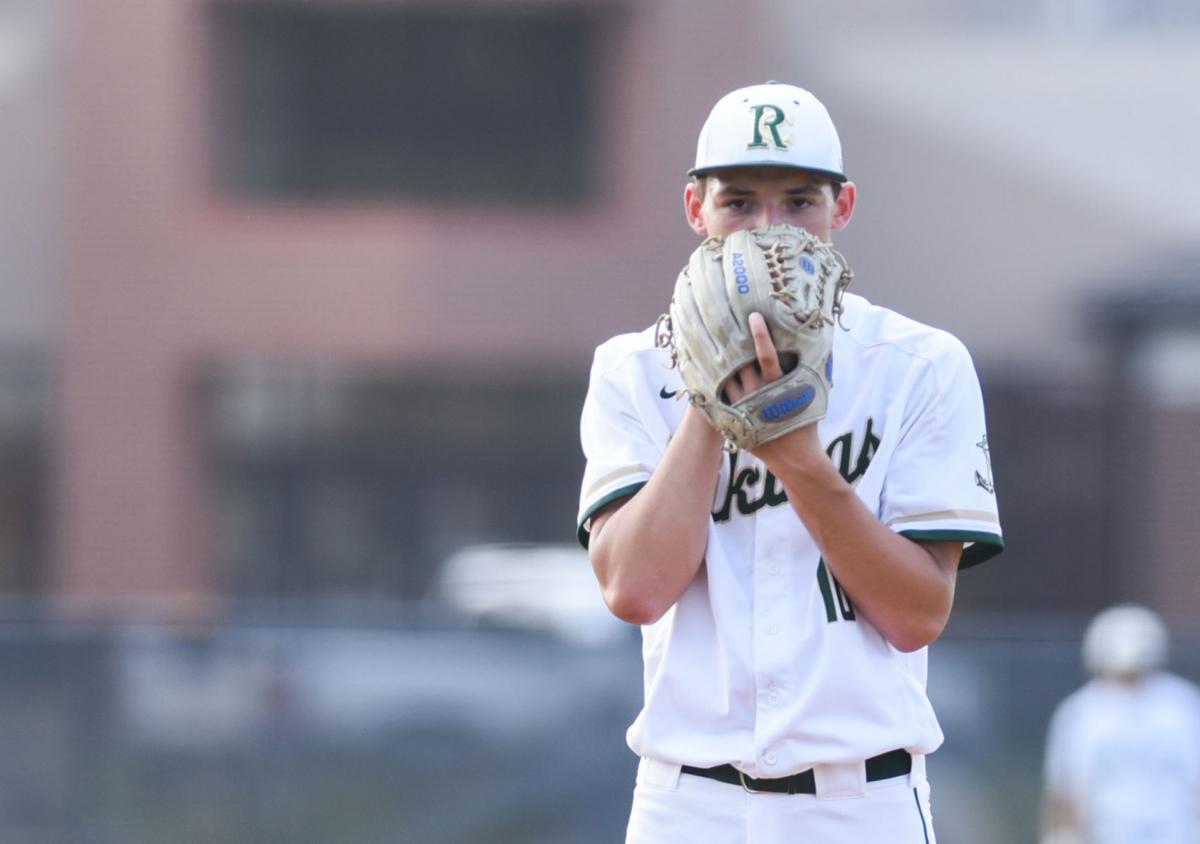 Rowan County’s Mason Moore focuses on his next pitch against Ashland during the 16th Region Tournament championship on May 28, 2019. 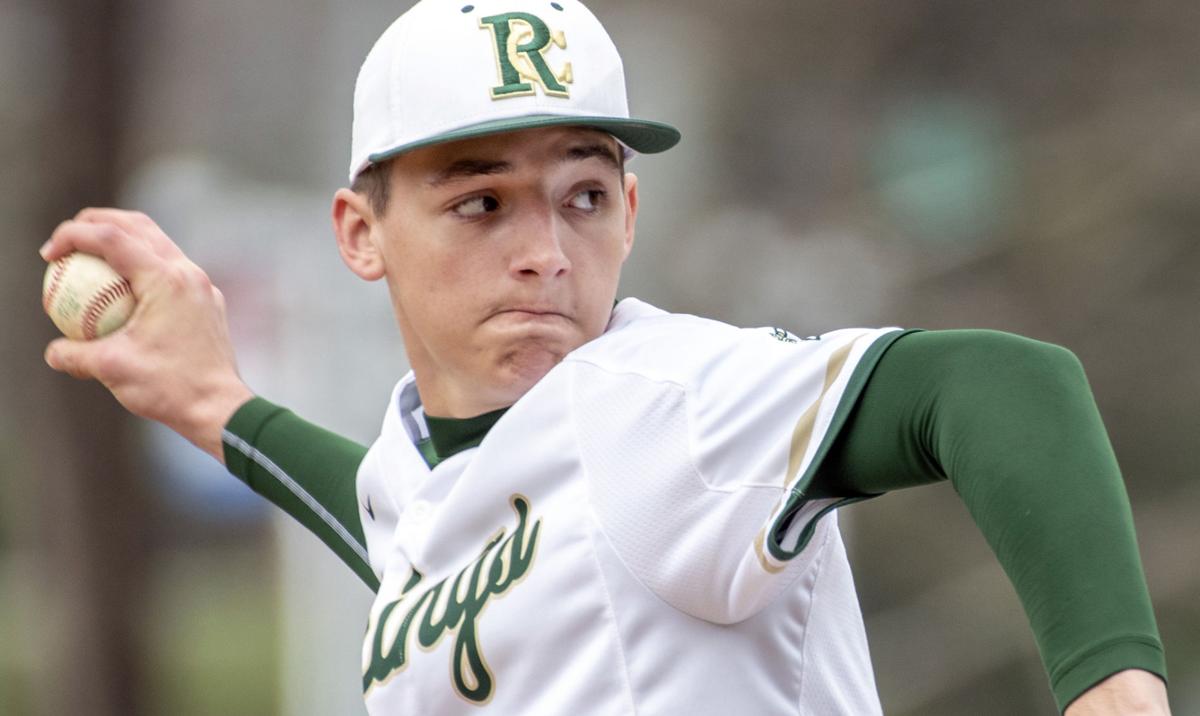 Rowan County’s Mason Moore delivers a pitch against Lewis County during his perfect game on April 6, 2019. 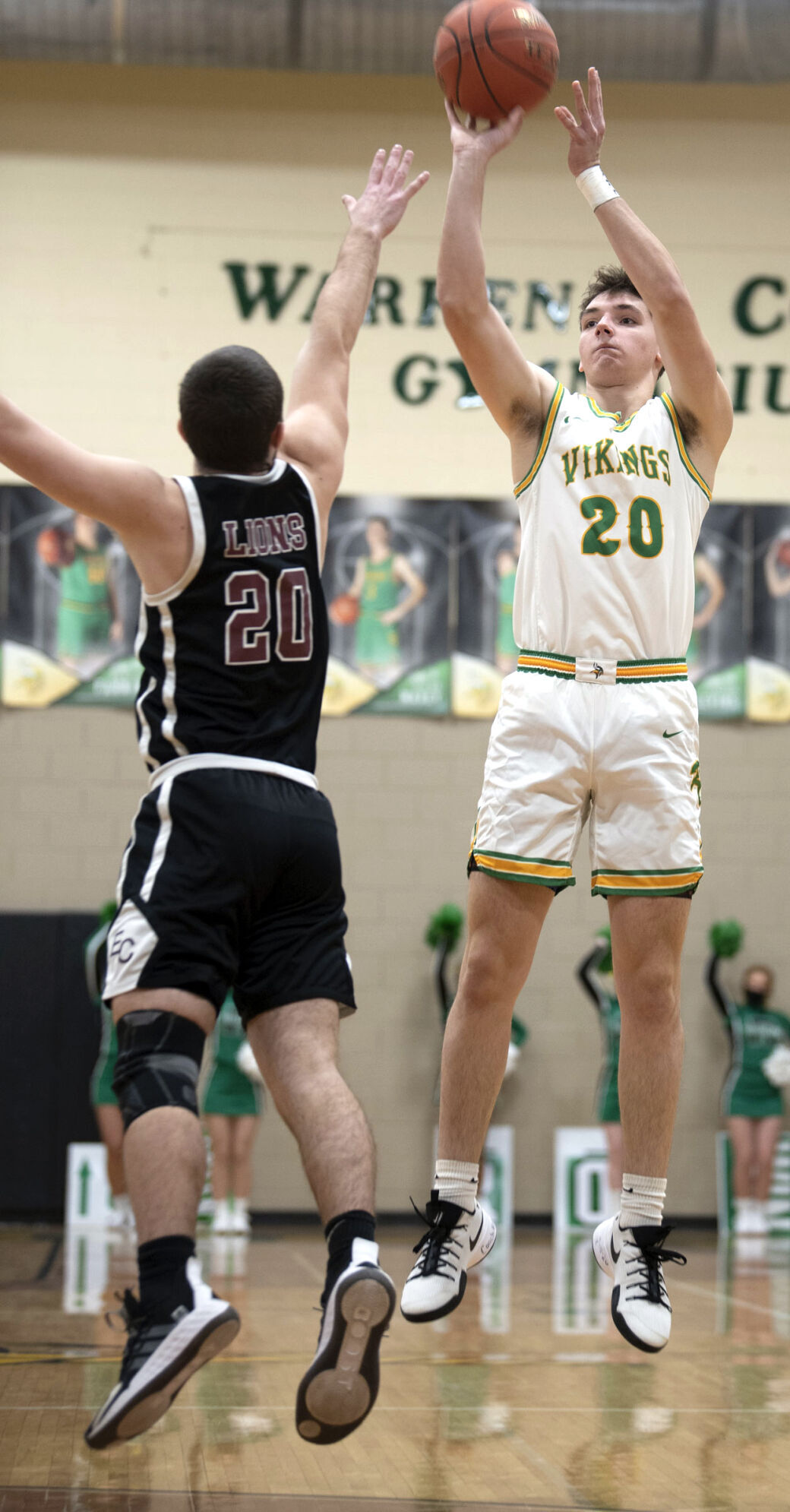 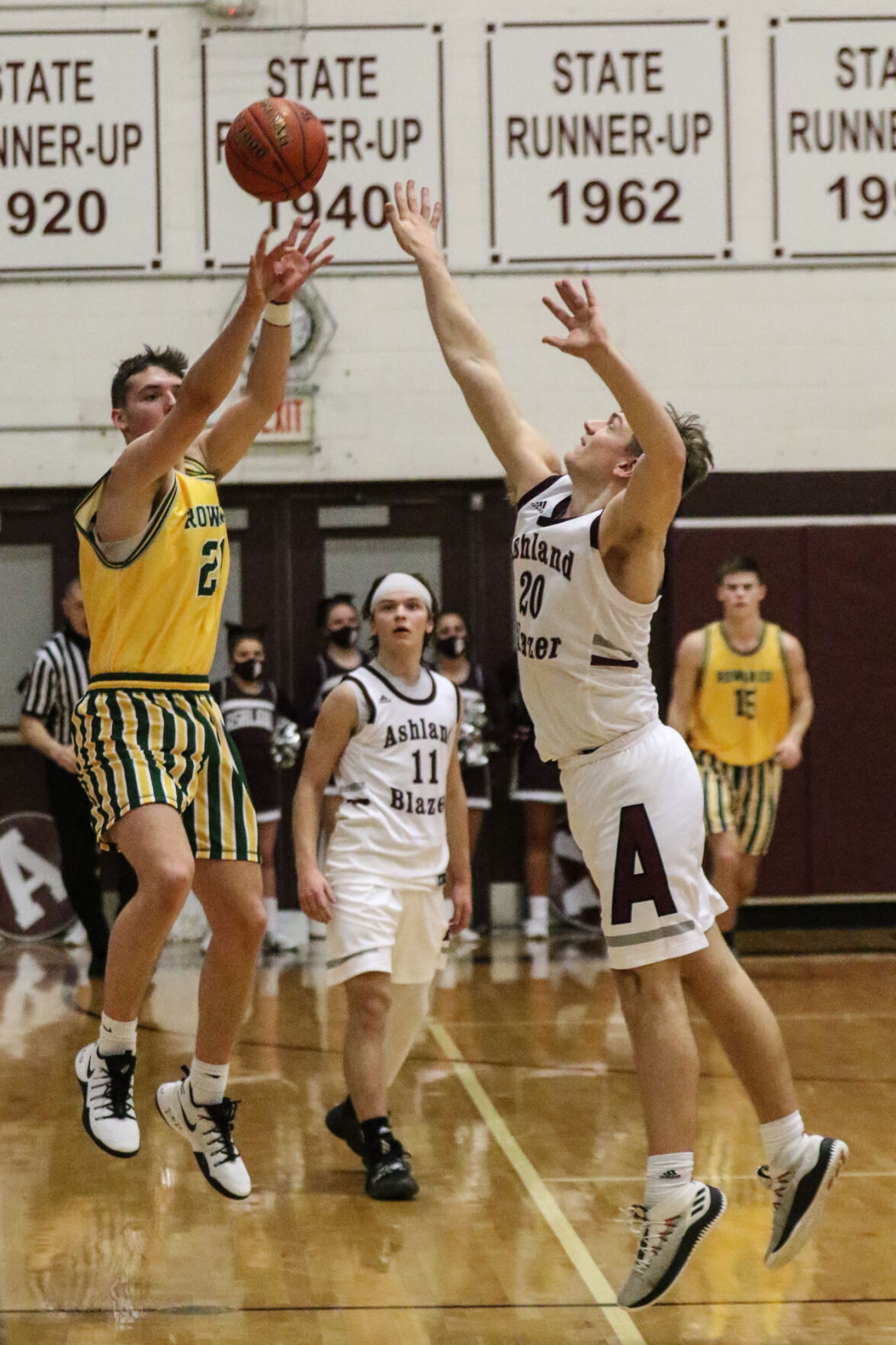 Rowan County's Mason Moore takes off in transition against East Carter during the 16th Region Tournament at Morehead State University on Mar. 5, 2020. The Vikings senior has signed a letter of intent to play baseball at the University of Kentucky.

Rowan County’s Mason Moore focuses on his next pitch against Ashland during the 16th Region Tournament championship on May 28, 2019.

Rowan County’s Mason Moore delivers a pitch against Lewis County during his perfect game on April 6, 2019.

Mason Moore just had to get through the first inning.

Three outs. It’s all the young pitcher would need to settle down.

Moore was a Paintsville freshman as he stepped on the pitcher’s mound at Whitaker Bank Ballpark in Lexington. The hurler was warming up as he prepared for his first start in a state tournament game against Christian County.

He suddenly stopped when the gravity of the moment hit him.

“My mom and dad would tell me the story when they saw me on the big screen,” Moore said. “I was so nervous. I just quit warming up. I moved to the back of the mound and had my hands on my knees. I thought I was going to throw up. Coach (Walt Crace) came out there and settled me down.”

“I said, if I get through this first inning, we will be good,” he added. “I gave a home run up to a Louisville commit Wyatt Stevenson. After that, I was fine. We won 3-1. It was just pregame jitters. People are counting on you, especially all the seniors.”

Moore was true to his word on that summer day in 2018. He gave up only one hit the rest of the contest. He fanned four and retired the final 15 batters he faced in a complete game performance.

Moore, now a Rowan County senior, embraces the big stage, whether the playing field is 94 feet of hardwood or a pristine diamond. He has excelled at region tournaments and found his way back to the baseball state tournament as a sophomore.

The stage only gets bigger for the two-sport athlete. Moore will don the blue and white four miles down the road from Whitaker Bank Ballpark. He signed a letter of intent to play baseball at Kentucky.

“Kentucky is a type of school I always wanted to go to as a kid,” Moore said. “I’ve always been a UK fan and I wanted to attend the University of Kentucky no matter the circumstance. My whole family loves UK. “Going to Kentucky and representing the state, it has been one of the main factors for me.”

Moore grew up with a love of basketball. He also played Little League baseball and All-Stars. After a growth spurt in middle school, his focus turned to the pitcher’s mound and quickly envisioned a future in the sport.

“As a kid, I probably have played basketball more than I played baseball,” Moore said. “In middle school, I started working on pitching a lot more. I realized I can make it farther in baseball than I could basketball. I started taking baseball more seriously. I went to camps and played travel ball. My whole summer revolved around baseball.”

Moore’s dedication to both sports has never been stronger. He is a Mr. Basketball candidate and had tallied 2,621 career points as of Feb. 17.

Vikings basketball coach Shawn Thacker said his point guard can fill up a stat sheet, but his influence on the court goes far beyond numbers.

“When you get a player of that caliber, it’s going to have a tremendous impact on your program,” Thacker said, “especially when he has the attitude and unselfishness that Mason has had. When you look at what he has done with the number of shots that he has taken, he is probably one of the most efficient scorers in the history of Kentucky high school basketball.”

“He’s become our point guard this year and he’s had to give up a little bit of his personal offense,” Thacker said. “He makes sure that other players are involved in the offense. We are blessed to have a good team and are hopeful that we can play the competition level that we have down the stretch.”

Moore transferred to Rowan County before the start of his sophomore year. The thought never crossed his mind to turn his attention solely to baseball. He would remain a multi-sport athlete. He even sought to expand his sports resume.

“When I went Rowan County, I was going to play two sports regardless, especially basketball,” Moore said. “I’ve never thought about just focusing on baseball. I don’t want to get too bored playing just one sport and basketball helps. I really wanted to play football too, but my dad said no.”

“My basketball success is super important to me,” he continued. “If for some reason baseball doesn’t work out, I can play basketball somewhere. My main focus now is winning region championships and going back to the state tournament.”

Moore was trepidatious heading to a bigger school, but his new teammates, including AJ Hacker, Corey Binion, Ryan Mullen and Matthew Gagliano, embraced and inspired him every day with their work ethic.

“It was very important having them there,” Moore said. “AJ was such a great guy to be around. He worked his tail off all the time. He still does to this day. Corey was a catcher that the ball never got by him. Ryan also worked hard. It made it a lot easier for me coming in there. They were so positive and encouraging.”

Vikings baseball coach Scott Collins said Moore’s experience took his program and his pitching staff to another level. Rowan County finished with a 39-4 record and a state quarterfinal appearance his sophomore year.

“When he arrived in 2019, you could see he definitely had all the tools,” Collins said.

“He had been to the state tournament and pitched there as a freshman,” he added. “When he came in, we had AJ Hacker here as well, who had also pitched in a state tournament. You had two guys with the experience that made our team that much better. They had been in big games and they knew what to expect.”

Collins said Moore has the demeanor and the determination to excel at the next level. The senior posted a 9-2 record on the hill in 2019 with a 1.17 ERA. He struck out 83 batters and walked only nine, according to KHSAA statistics.

He showed the ability to navigate tough innings and, just like that day at Whitaker Bank Ballpark, get stronger as the game progresses. The abilities will be valuable as Moore adjusts to SEC batters.

“He is a competitor,” Collins said. “He is going to compete every time he is out there. He is going to give you everything he’s got. As a pitcher, you’ve got to have a short memory. There will be errors behind you and hits against you. Mason realizes you’re not going to strike everybody out.”

“Mason doesn’t get rattled,” he continued. “The moment is never too big for him.”

Moore said he gets his competitiveness from his father, Ron, who was also a region champion at Rowan County. It helped him mature and perform well against older competition. Ron coached Mason in junior high at Paintsville.

“He was hard on me as a kid,” Moore said. “If I had a bad attitude, he would get onto me for it. He would push me at a young age because he knew how good I could be. I now realize why he did all that stuff.

“It’s been a blessing to have him with me. Most of my talent comes from him. Having my dad around through it all, it has been awesome. Some kids don’t have that. My dad has helped me a lot.”

Moore’s devotion to both sports has made an impression on his coaches as well. The senior also had Division I interest to play basketball but had already made his commitment to the diamond.

“He is all the time wanting in the gym,” Thacker said. “As soon as the baseball summer program shuts down, he’s asking to get back in here. He loves basketball. He’s also a Division I basketball player. I am very confident he could go somewhere and make money playing basketball beyond college, just like baseball.”

The years of hard work culminated in the Moore kitchen. The hurler signed his letter of intent to play Division I baseball in the Southeastern Conference surrounded by his family.

“It is such a good feeling when all that hard work paid off,” Moore said. “I’ve been working my tail off since my freshman year. The coaches here at Rowan County and Paintsville have been telling me ever since I was little that I could make it big if I worked hard at it. When I signed with UK, it all came into perspective.”

Moore plans to major in psychology.