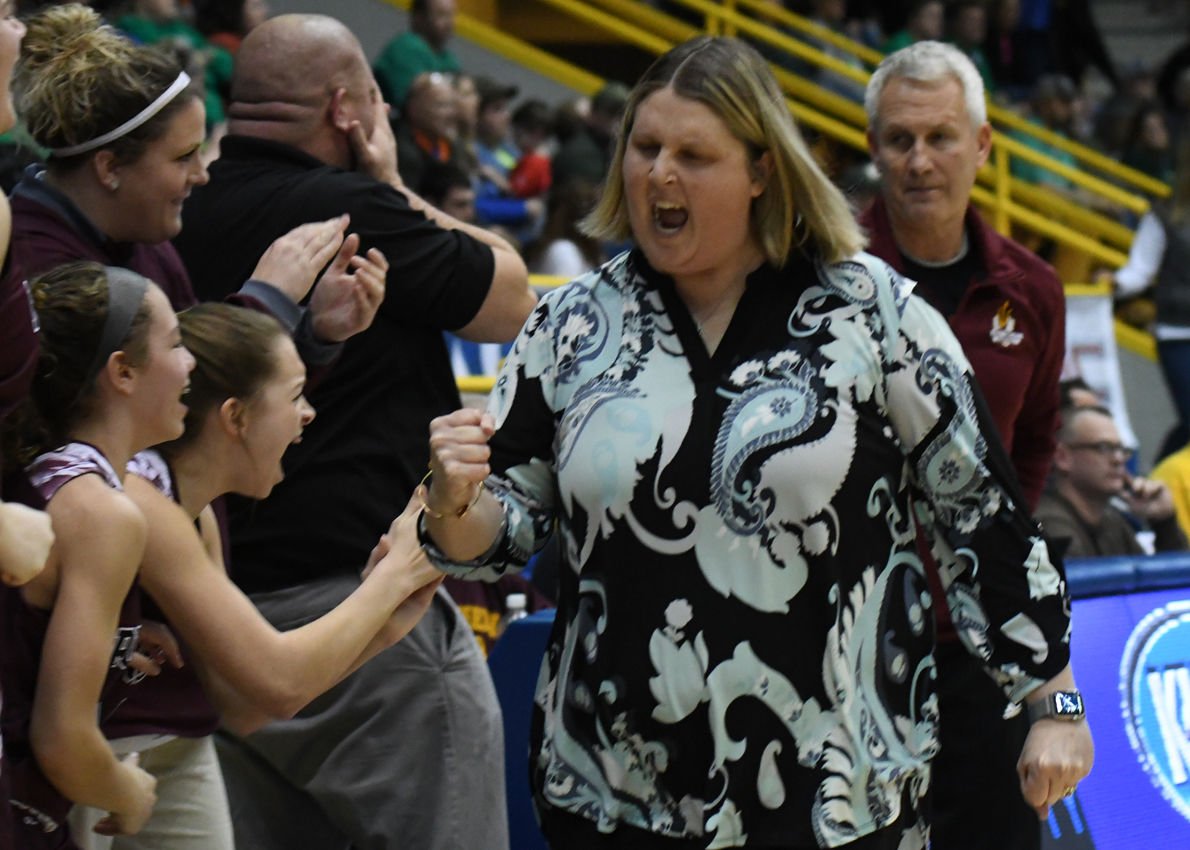 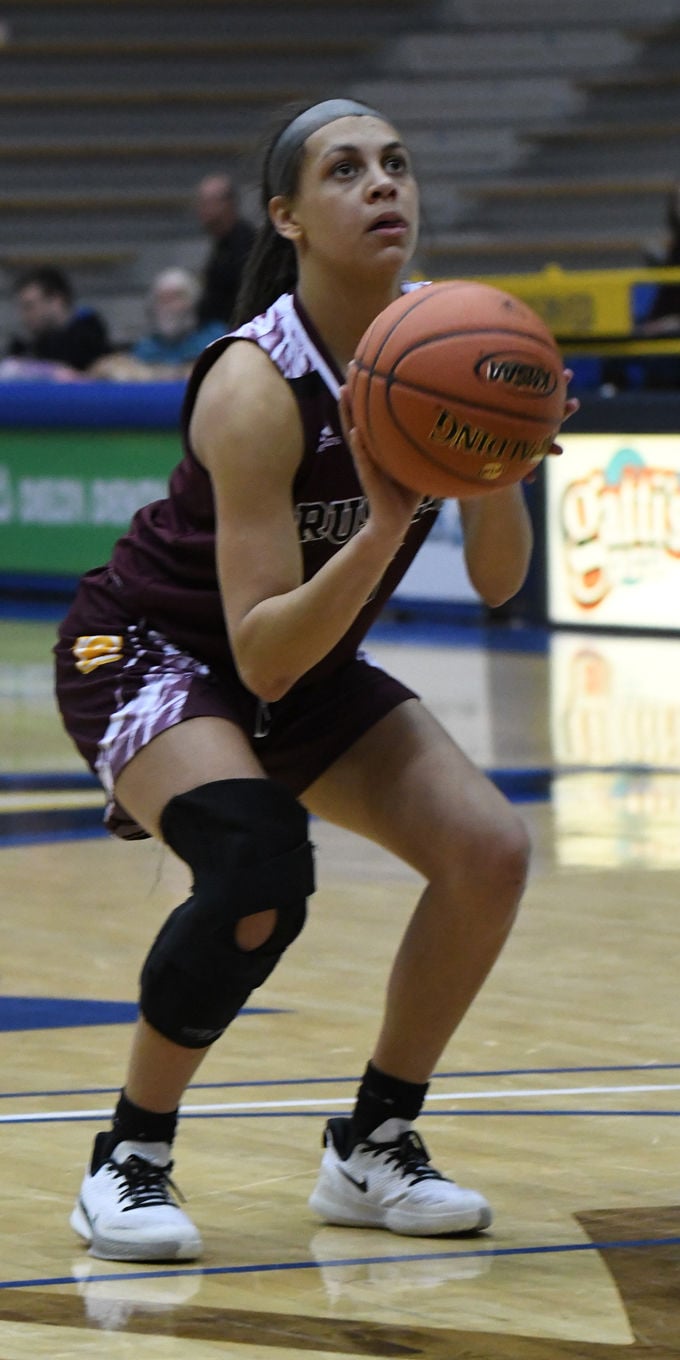 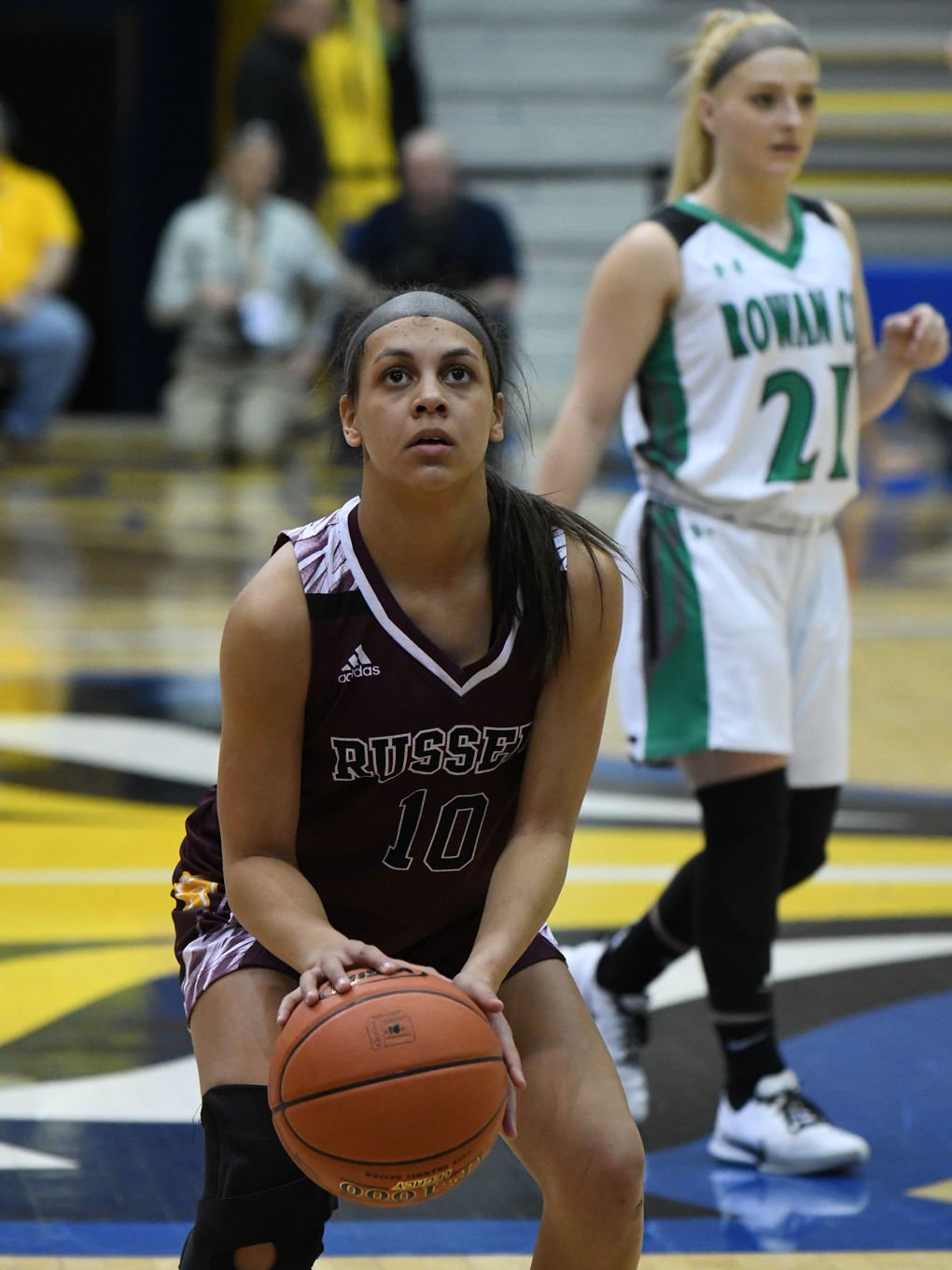 MOREHEAD Things could not have gone much worse than they did for Russell in the first half of its contest with Rowan County Friday night.

After taking a six-point lead within the opening three minutes, Russell went scoreless for over six minutes in the half. The Lady Devils turned it over 15 times, hit only two field goals in the second quarter and managed only four points to Rowan County‚Äôs 12.

Even worse, Shaelyn Steele was whistled for her third foul with one-minute remaining in the half, yet, Rowan County only led by seven, 22-15.

But the Lady Devils saved the best for last in the game‚Äôs final three minutes of play with Steele‚Äôs layup with 1:50 to go to give Russell the lead for good and punch its ticket into tonight‚Äôs 16th Region Championship with three-time defending champion Boyd County.

‚ÄúI definitely didn‚Äôt feel like anything was going our way,‚ÄĚ Russell coach Mandy Layne said. ‚ÄúI can‚Äôt say enough (about Rowan County.) Haven Ford is a heck of a player, man. Wow! She was unbelievable tonight, too. For us just to hang in there like we did tonight through the adversity, for us to be able to play in the championship is pretty special.‚ÄĚ

Unbelievable Ford was with another double-double and a stat line that makes any sports enthusiast shake their head in disbelief. Ford finished with 20 points, 14 rebounds, five steals and five assists. Ford netted 13 of her points from the free throw line but could not find the same consistency from field.

‚ÄúShe was 3 of 12 from the field, which isn‚Äôt typical of her,‚ÄĚ Rowan County coach Matt Stokes said of Ford. ‚ÄúHer and Brooke (Blevins) both usually don‚Äôt shoot that bad. Free throw line is Haven‚Äôs spot. She is really good at the free throw line, rebounds the ball extremely well. Just wished we would‚Äôve knocked down a couple more shots.‚ÄĚ

Rowan County hit only two field goals in the second and third frames while missing 26.

‚ÄúWe couldn‚Äôt knock shots down,‚ÄĚ Stokes said. ‚ÄúThat‚Äôs all it was. Couldn‚Äôt make shots. You lose by seven and shoot 20 percent. We kind of went back to where we were at the beginning of the year where we kind of rushed things and not getting the shot we are used to taking.‚ÄĚ

Layne said her speech at the half after one of the sloppiest halves of basketball her team had played all season was very simple advice.

‚ÄúJust calm down,‚ÄĚ Layne said. ‚ÄúWe get so doggone nervous. I love this group, man. They are great competitors but sometimes they get a little worked up. Once we calmed down and got our confidence going, we really started playing how we know how to play.‚ÄĚ

Russell (25-8) pulled to within two at 28-26 and Steele‚Äôs only triple of the night pushed Russell to within two just inside of six minutes to go. But Russell could only watch Ford push the edge back to six on a pair of free throws with 3:35 left and Hill picking up her fourth foul to boot.

Kate Ruggles sparked a 5-0 run capped off by an and-1 by Hill to pull within one with 2:54 to go. Twenty seconds later, Steele hit a jumper to give Russell its first lead since the first quarter and things finally started falling the Lady Devils way.

‚ÄúI said they had been tougher than us the entire game but those last three minutes we finally found some life,‚ÄĚ Layne said. ‚ÄúJust a total team effort and total team defense. We really stepped up there those last four minutes. Shaelyn Steele, you wouldn‚Äôt think she‚Äôs an eighth-grader tonight.‚ÄĚ

Steele scored 11 of her 19 points in the final 2:30 of the contest including seven consecutive free throws down the stretch to seal the win.

‚ÄúDefinitely nerve-racking,‚ÄĚ Steele said of the free throws. ‚ÄúThey sealed the game for us, and I‚Äôm just really glad I could help my team advance to the next round.‚ÄĚ

Hill and Ruggles went to war on the glass to give Russell additional looks in the final minute, combining for five of the team‚Äôs 10 offensive rebounds. Hill logged nine points, seven rebounds and seven blocked shots. Ruggles kicked in six points and seven boards.

‚ÄúHer and Aubrey there at the end got us some huge rebounds down the stretch that we needed,‚ÄĚ Layne said. ‚ÄúThe and-1 by Aubrey Hill got us really going there at the end and was huge.‚ÄĚ

As big as Steele was in the final quarter, Kaeli Ross put Russell in position for the comeback win after dropping seven of her 10 points in the third.

‚ÄúWe knew coming to that second half that Ross and Steele both would really look to take over the game,‚ÄĚ Stokes said. ‚ÄúRoss did it in the third quarter. Steele did it in the fourth quarter and we threw everything at her we could. Kudos to them, they played hard. They didn‚Äôt stop playing in the first half. Shaelyn got her third foul in the first half, but she never stopped playing hard.‚ÄĚ

The Lady Devils now look to unseat the defending champs in a rematch of last year‚Äôs title game won by the Lady Lions 63-47.

‚ÄúThey are the three-time defending champs,‚ÄĚ Layne said of Boyd County. ‚ÄúThey are the favorites, so we are just going to go out and have fun.‚ÄĚ

The teams split in the regular season with each winning on their opponent‚Äôs home floor.

Rowan County closes the season at 22-11 with ‚Äúmuch to be proud of‚ÄĚ according to Stokes.

‚ÄúTo win that many games and our seniors finally won a district championship,‚ÄĚ he said, ‚Äúthey‚Äôve got a lot to be proud of. It‚Äôs disappointing now, but it was a good season.‚ÄĚ