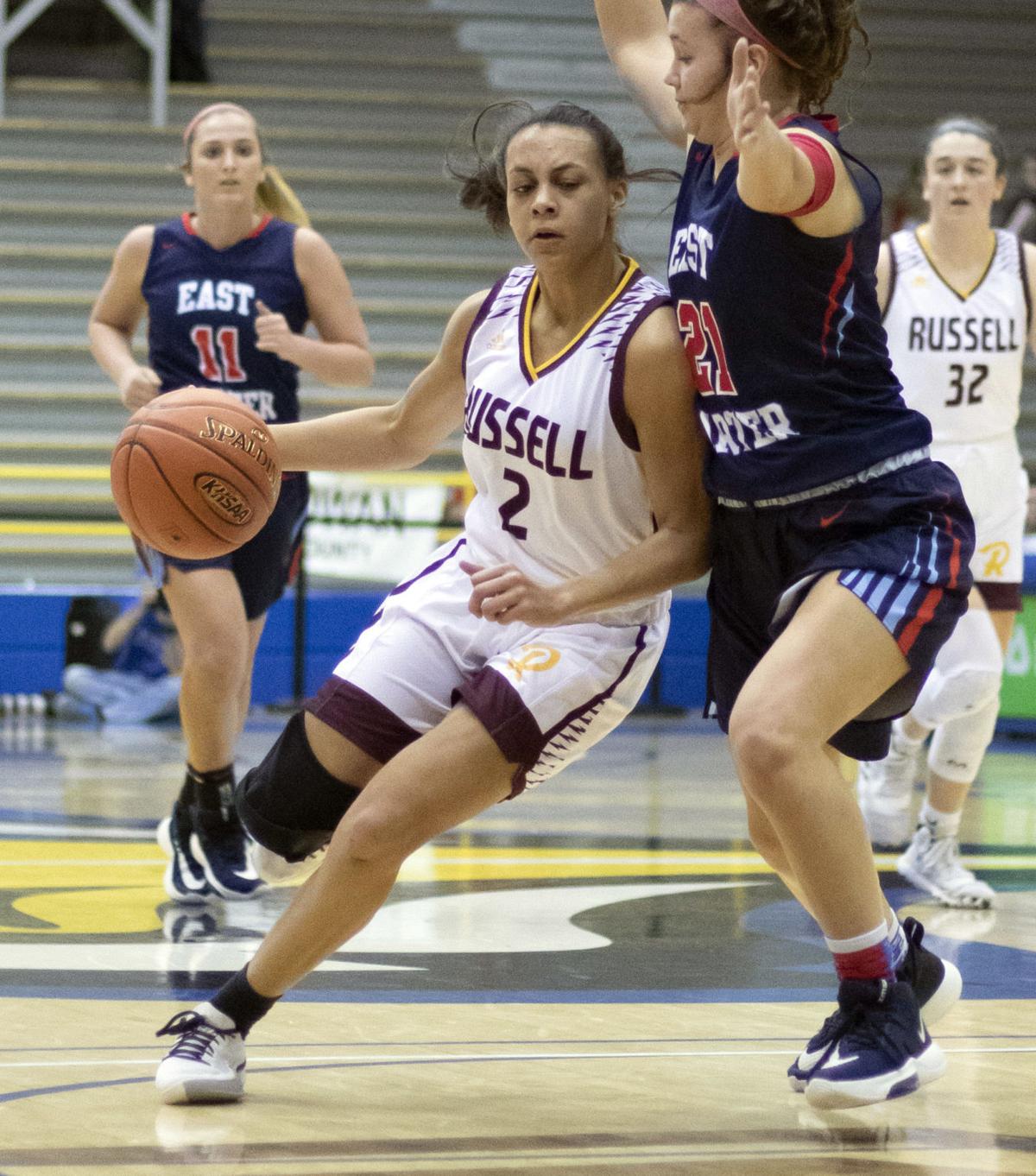 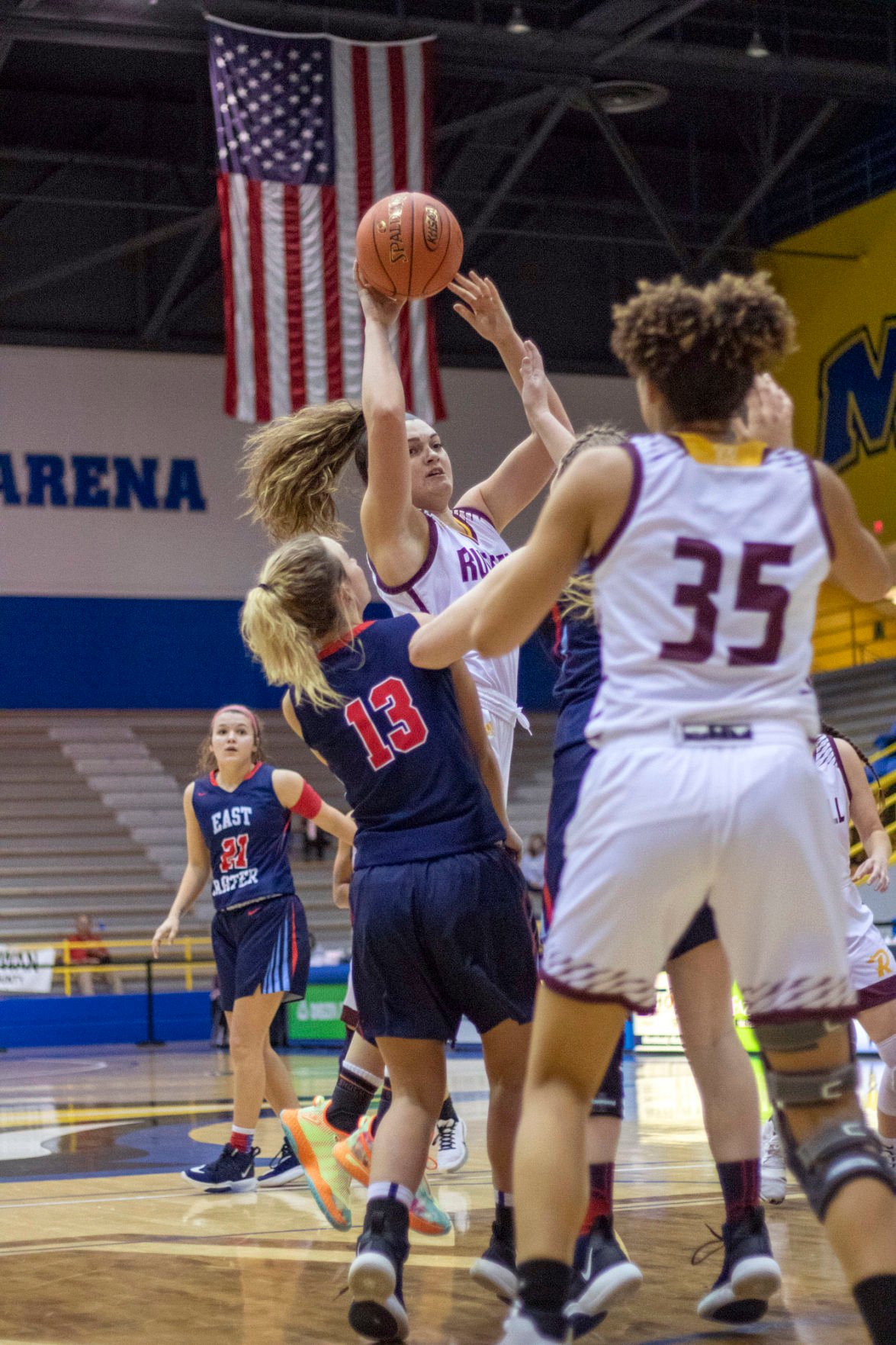 Russell’s Kaeli Ross passes inside to Aubry Hall Tuesday, March 3, 2020, during their game against East Carter in the 16th Region Girls' Tournament in Morehead, Ky. Photo by Makayla Holder / For The Daily Independent 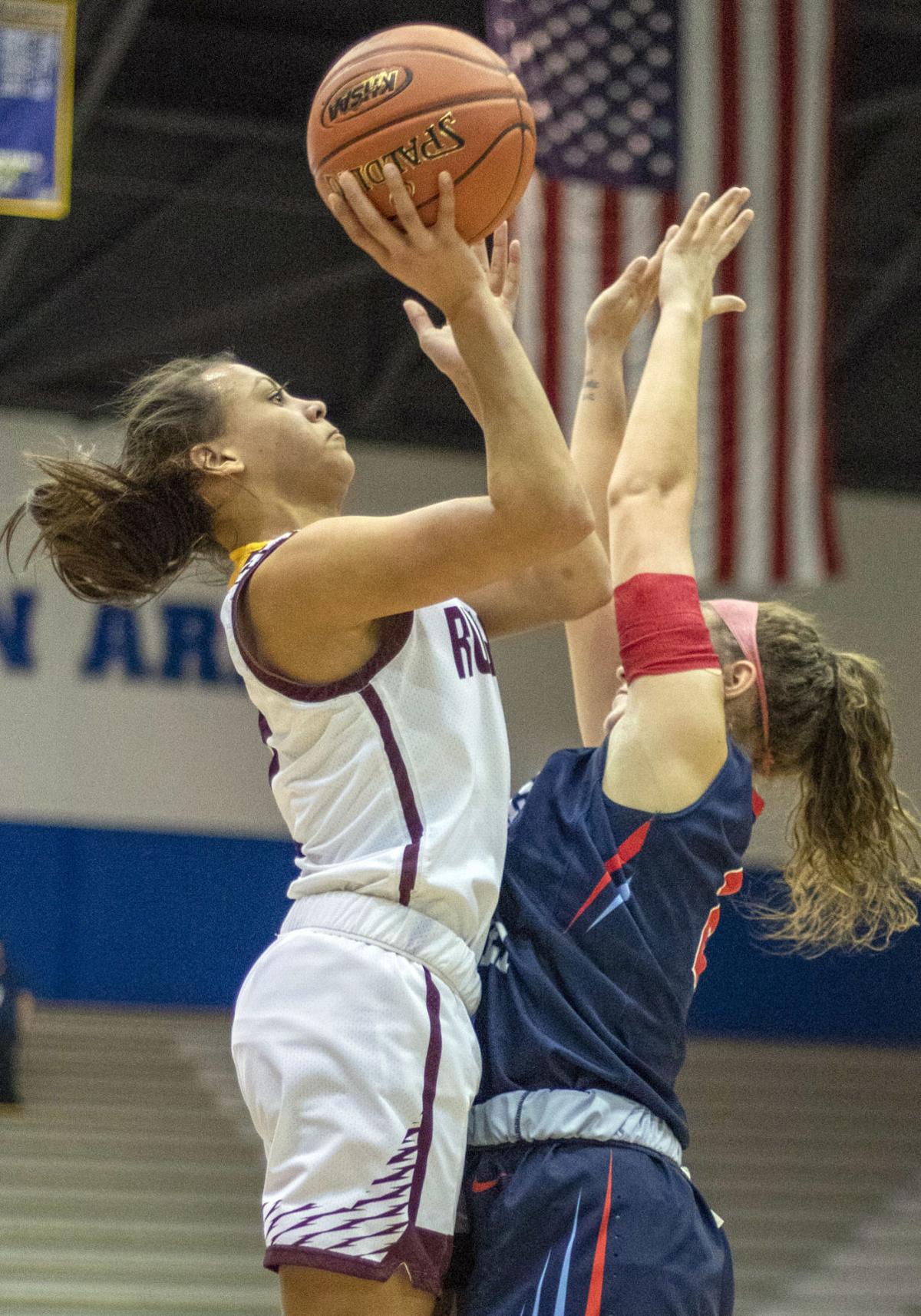 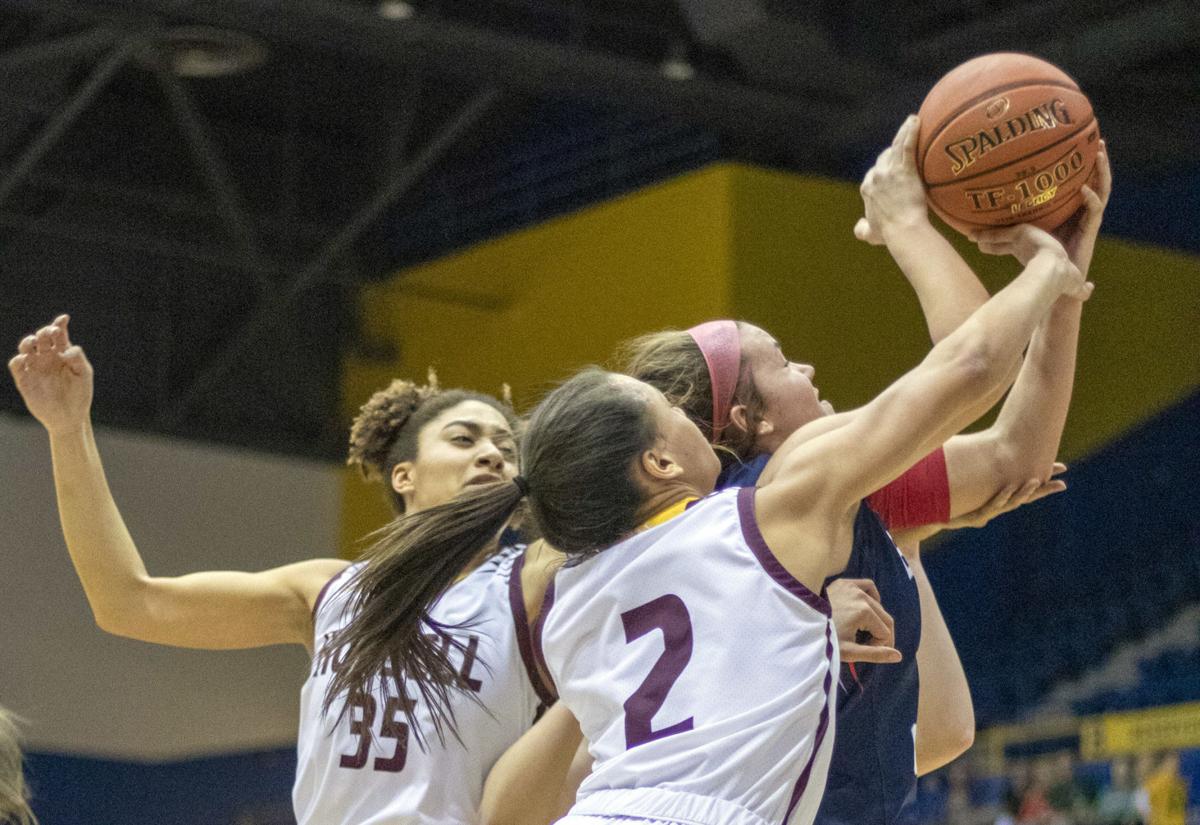 East Carter’s Avery Hall fights a Russell triple-team for a rebound Tuesday, March 3, 2020, during the 16th Region Girls' Tournament in Morehead, Ky. Photo by Makayla Holder / For The Daily Independent 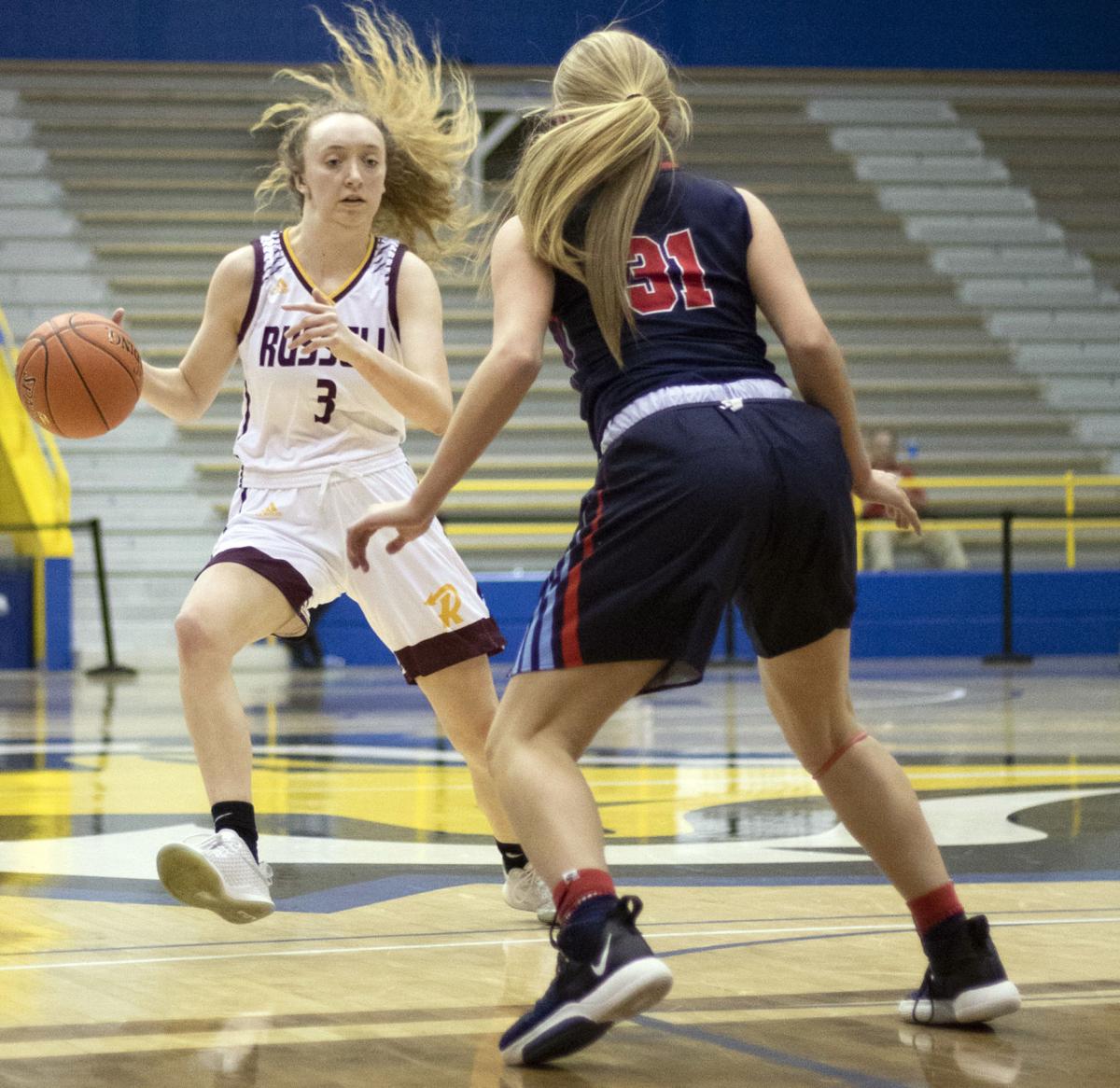 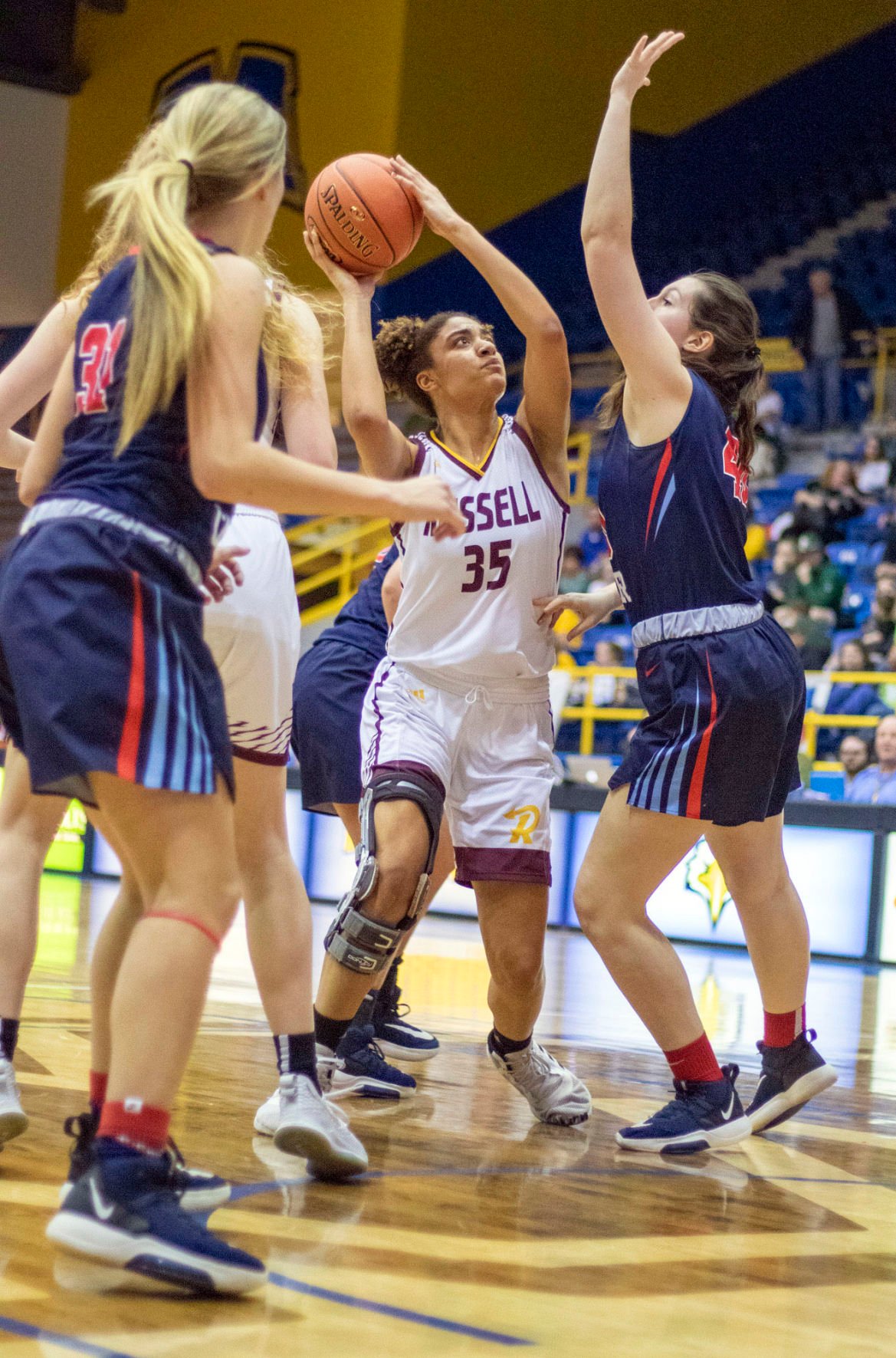 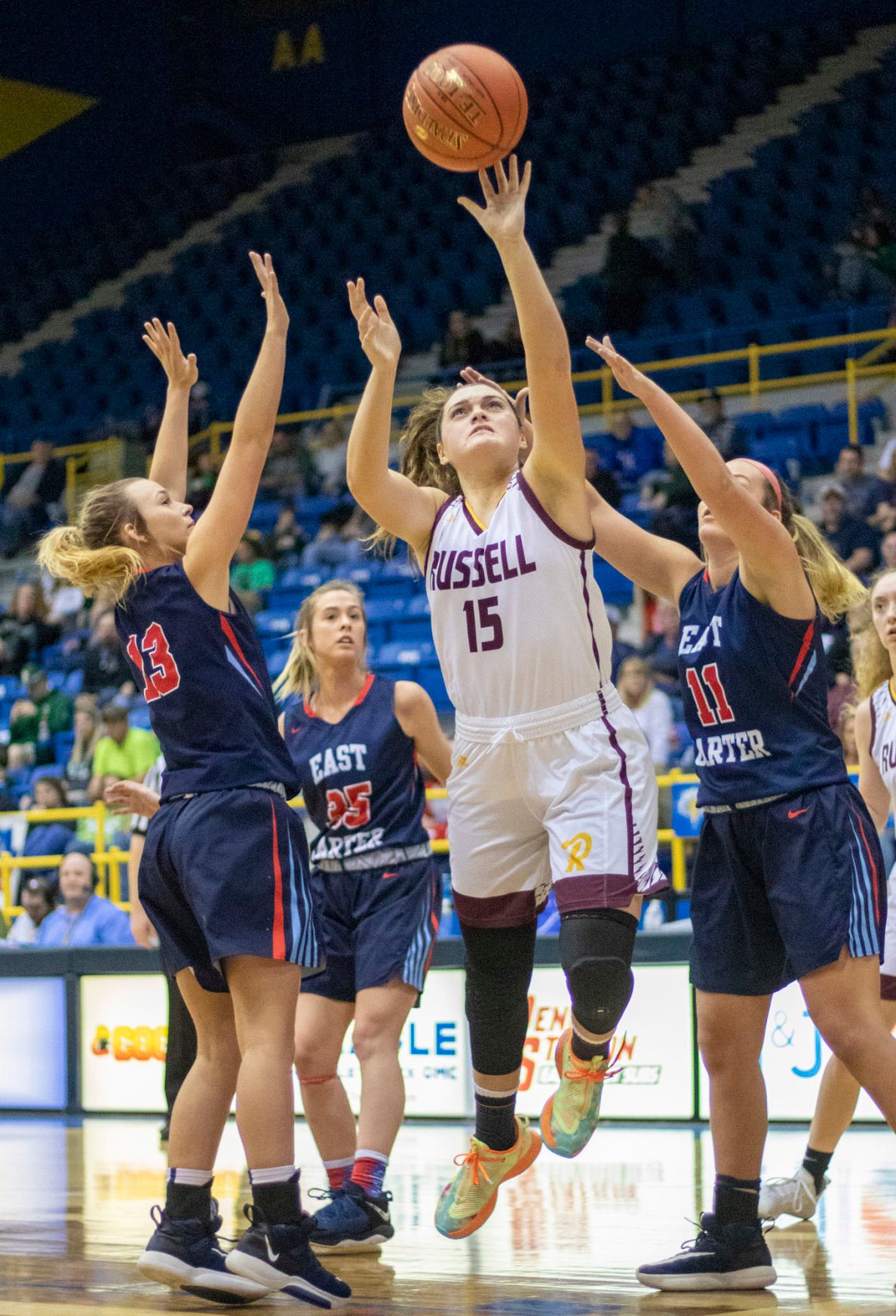 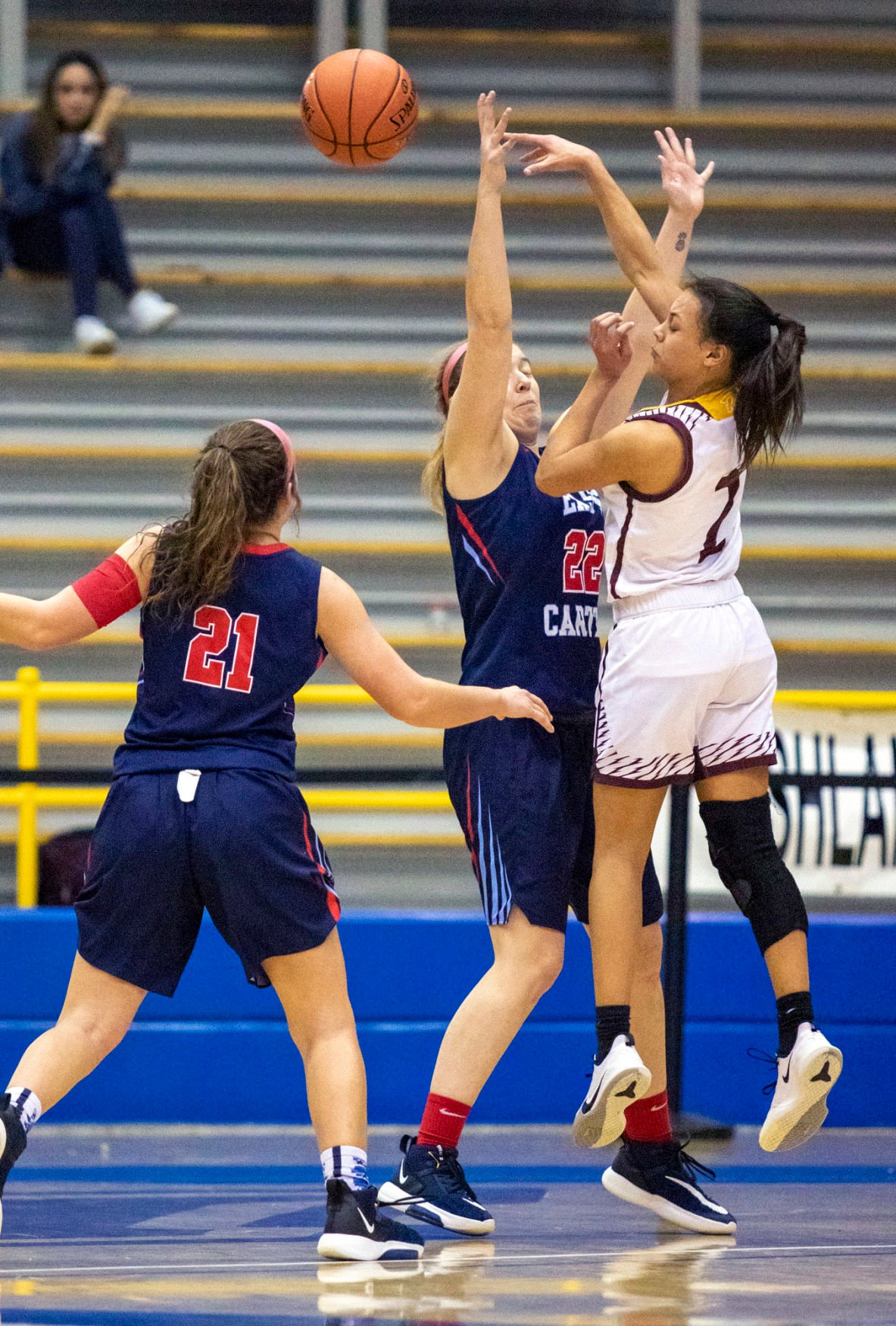 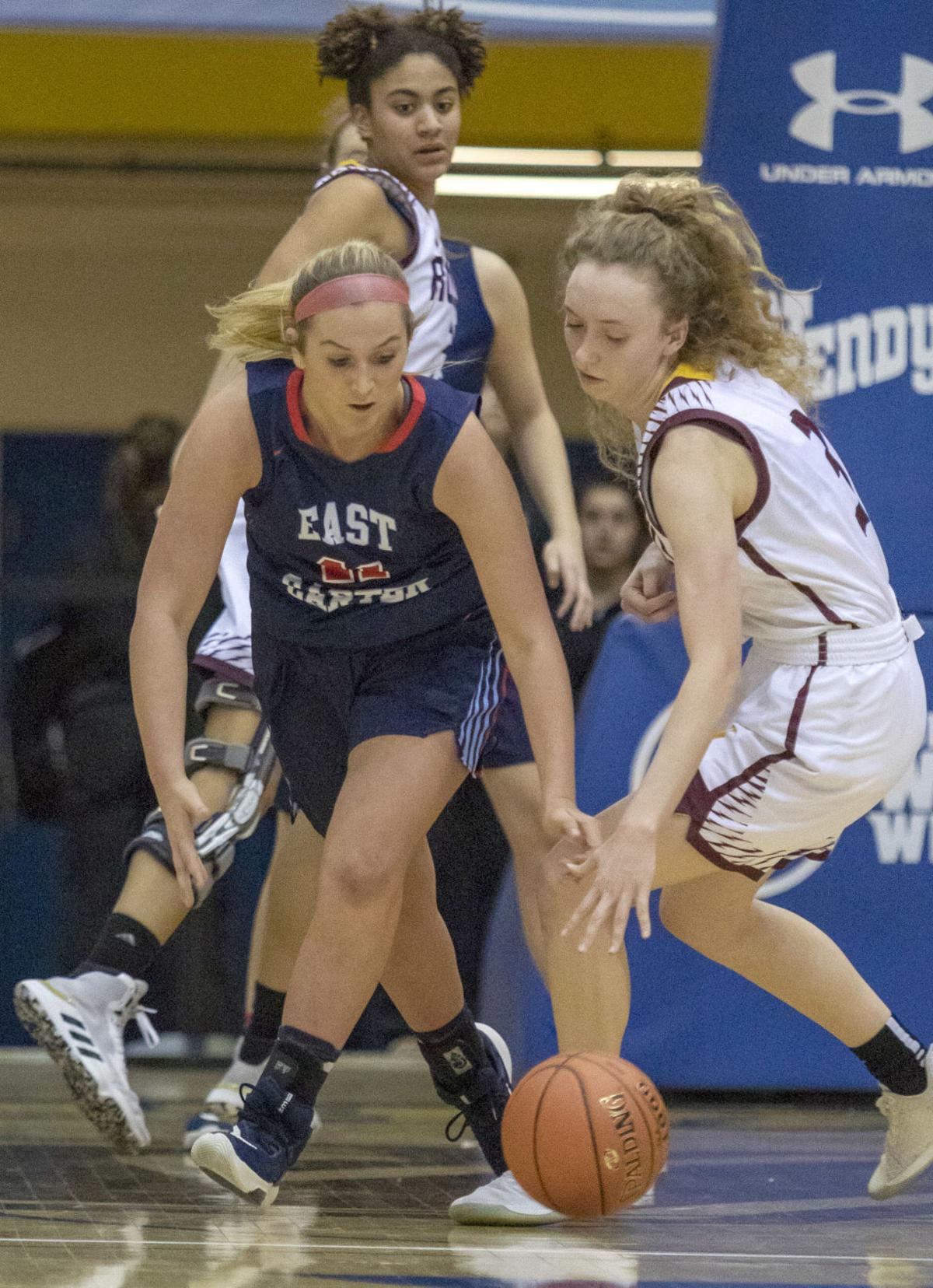 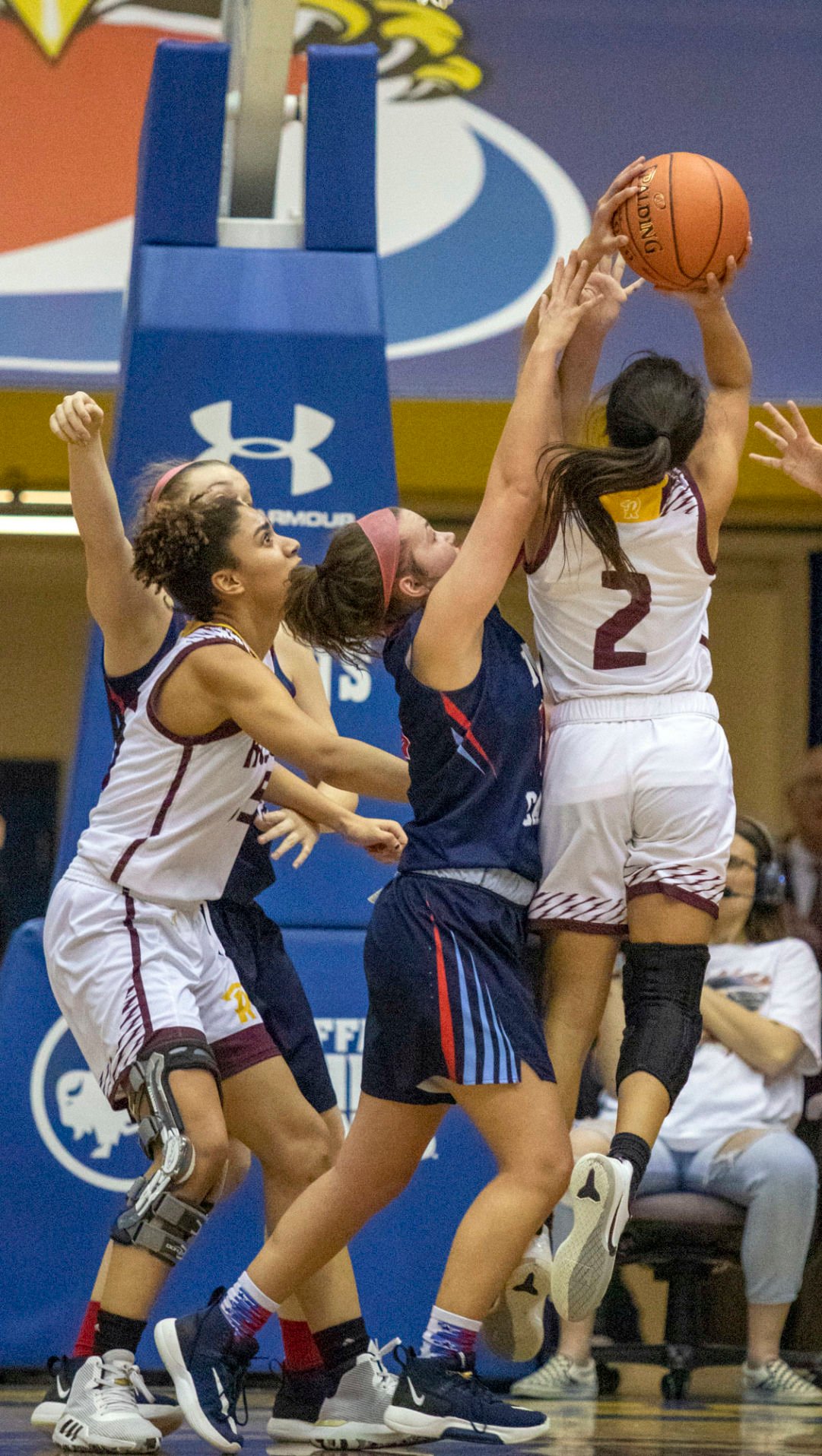 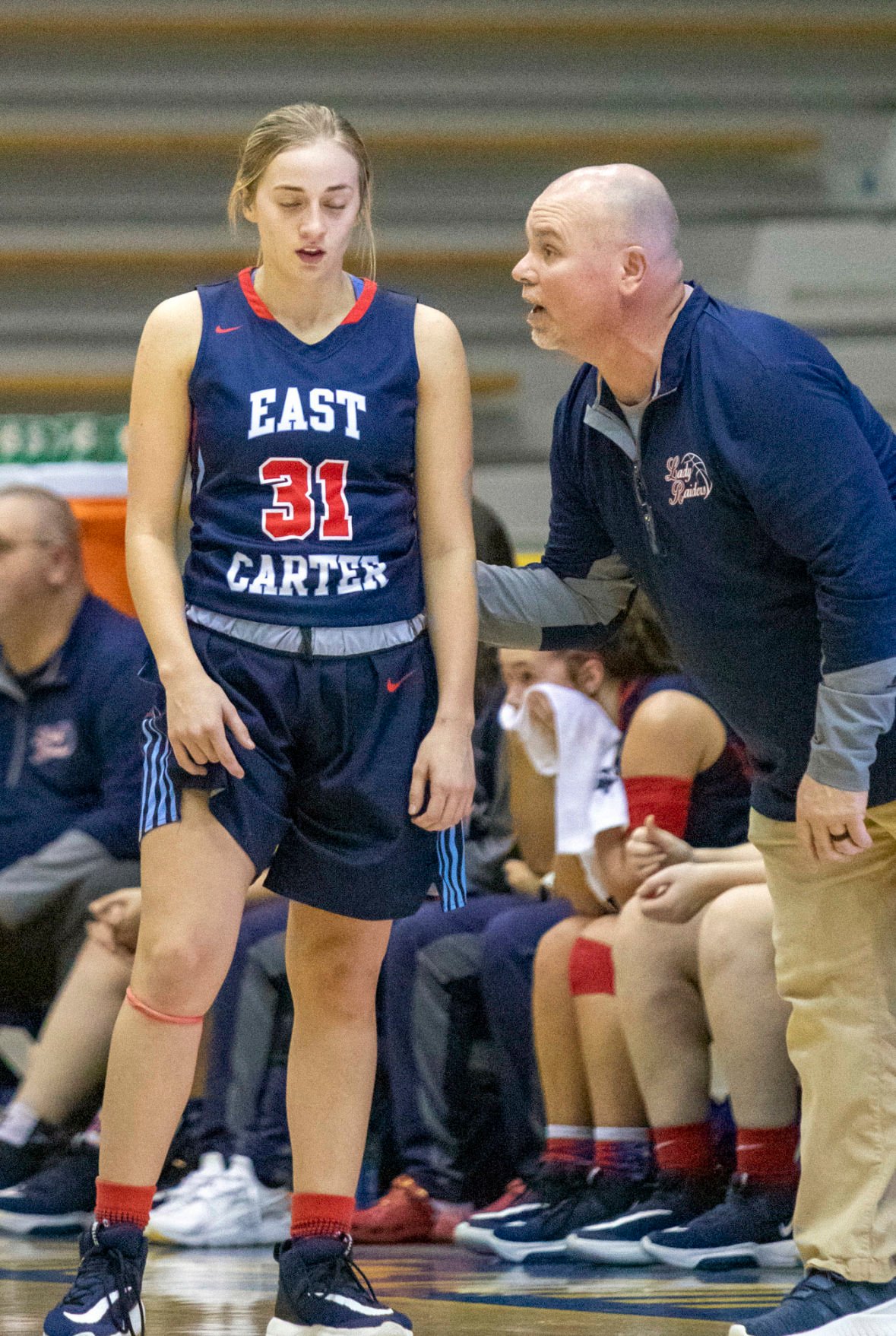 East Carter coach Jeffery Damron talks to Avery Hill during their game against Russell Tuesday, March 3, 2020, during the 16th Region Girls' Tournament in Morehead, Ky. Photo by Makayla Holder / For The Daily Independent 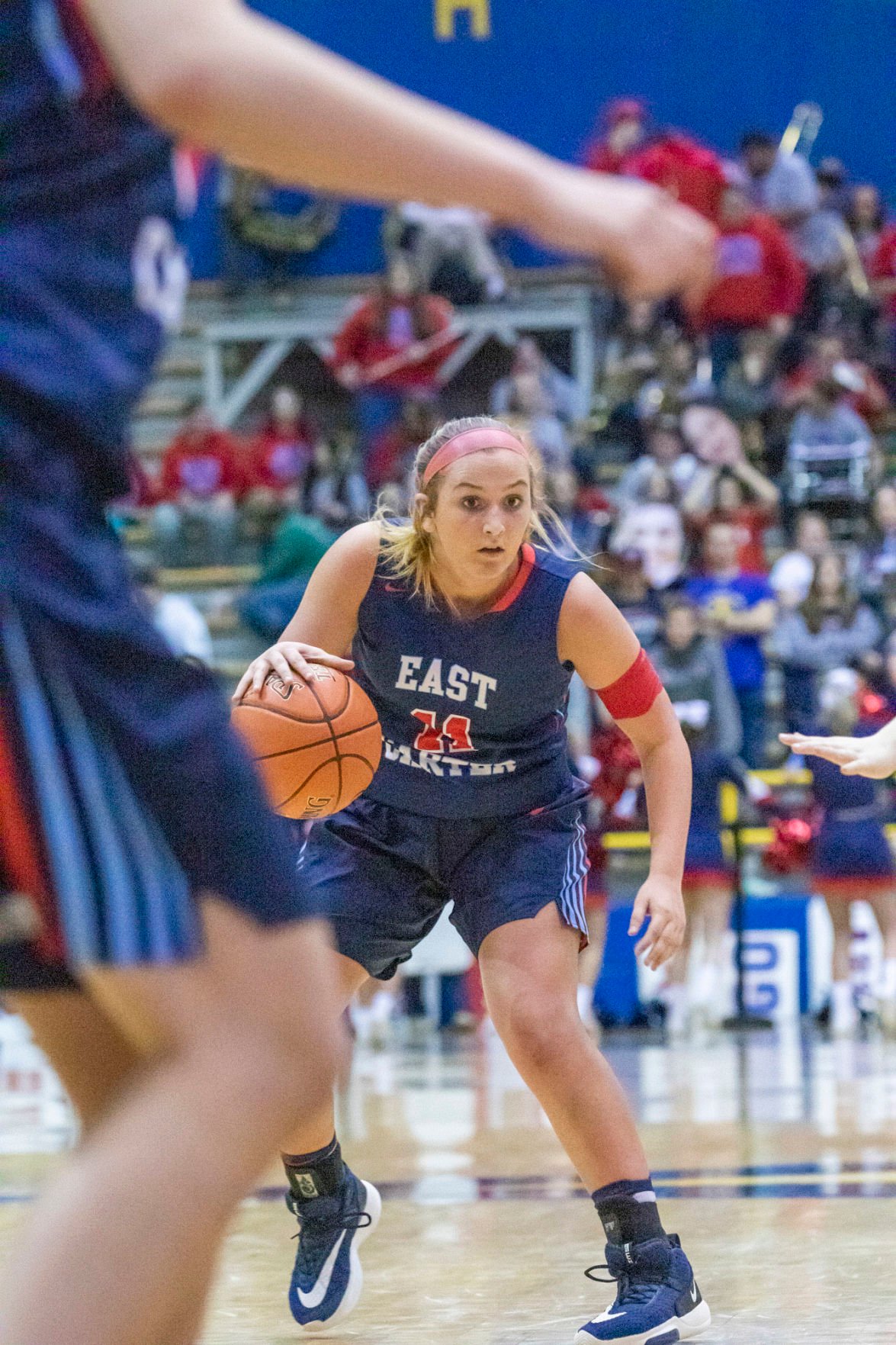 Russell’s Kaeli Ross passes inside to Aubry Hall Tuesday, March 3, 2020, during their game against East Carter in the 16th Region Girls' Tournament in Morehead, Ky. Photo by Makayla Holder / For The Daily Independent

East Carter’s Avery Hall fights a Russell triple-team for a rebound Tuesday, March 3, 2020, during the 16th Region Girls' Tournament in Morehead, Ky. Photo by Makayla Holder / For The Daily Independent

East Carter coach Jeffery Damron talks to Avery Hill during their game against Russell Tuesday, March 3, 2020, during the 16th Region Girls' Tournament in Morehead, Ky. Photo by Makayla Holder / For The Daily Independent

Once down seven points, the Lady Raiders bolted out to an early lead with a 15-0 run. The Lady Devils responded with a spurt of their own after a change in defensive philosophy.

Russell withstood a late East Carter charge and pulled away for a 55-46 win in the 16th Region Tournament quarterfinals on Tuesday night at Morehead State University.

“We had a really nice change of defense,” Russell coach Mandy Layne said. “It really threw them off. We probably stayed in man defense too much in the first half. That’s on me. The second half, I thought we had a really good game plan. We were able to get some turnovers and some easy baskets.

“We finally calmed down on offense and got some looks that we needed.”

The Lady Devils quickly erased an eight-point halftime deficit with their suffocating pressure. Steele secured several of her six steals to begin the third quarter. Her swipe and layup tied the score at 27-27 midway through the frame.

“We had trouble running our offense and we weren’t going to the boards very well,” Steele said. “We came out in the second half and our defensive pressure helped us. We got stops early. We were able to tie it up and get the lead. We started rebounding.”

Steele is an eighth-grader who already has region tournament experience from last season. She said neither the big stage at Ellis T. Johnson Arena nor her age will never rattle her.

“When I get on the floor, I just forget about my age,” Steele said. “I just feel like the rest of the players. It doesn’t really play a factor. When I start playing, it just feels normal.”

East Carter coach Jeff Damron praised the Lady Raiders’ effort but said the four-minute stretch was an example of his team’s “it factor.”

“You know that good teams are going to make adjustments,” Damron said. “We told them to be prepared because there will be ups and downs. We have come up with a name for when we are playing hard but not really playing. We are playing hard, but you can see it in their eyes, they are not adjusting and freezing. We came up with the term ‘It.’ We got in the middle of it and sometimes it’s hard to get out of it.”

Russell (24-8) grabbed its first lead of the second half on senior Kate Ruggles’ layup near the end of the third frame. Bella Quinn’s trey stretched the advantage to 38-31.

“It’s the region tournament and I was so happy when we came out after halftime and went back to being ourselves,” Layne said. “We started playing to win and not to lose.”

East Carter (18-13) shrunk the margin to just 42-40 on a long 3 from Haley Campbell less than a minute into the final frame. Aubrey Hill completed an and-1 and the Lady Devils went on a 13-4 surge to put the game out of reach. Malia Blevins followed Hill’s big play with a clutch wing 3-pointer.

The Lady Devils will meet Rowan County in the Friday’s second region semifinal at 8. The Lady Vikings, 69-53 winners over Ashland, now stand in the way of Russell returning to a region final.

“It was the shot of the game, as I told her, hitting that 3,” Layne said of Blevins’s bucket. “I couldn’t be happier for her. I know that we have Rowan County (on Friday) and that is a huge obstacle for us. Our goal is to get to a regional championship game and get another opportunity to get to Rupp Arena.”

Steele led Russell with 20 points. Hill posted another double-double with 13 points and 12 rebounds.

“She stepped up huge and had some huge baskets,” Layne said of Steele. “There are sometimes where she needs to slow down a little bit and she knows that. When you’re used to being able to drive past everybody, it’s an adjustment. She had some key steals and key baskets when we needed them.”

Alyssa Stickler posted a team-high 19 points for the Lady Raiders. Avery Hall gave East Carter a big boost off the bench, scoring all seven of her points in the first half.

“Russell’s defense took away somebody that was really effective in the first half,” Damron said. “I could spread the floor and tell Avery to go to the basket. She is really good at doing that. But if you pack it in, that’s her next step of growth, realizing how to play that part of the game. … It’s not just her.”

“We missed a lot of open looks,” he added. “We’ve got to stretch out the defense. But they never quit playing and that’s all I ask them to do.”

Layne said the team will benefit from facing a deficit in tournament play. They displayed the confidence to come back.

“It showed that we can play from behind,” Layne said. “We got ourselves back together. It was good for us to get some adversity and show some mental toughness.”