Has the music stopped? Local musicians in strange times: 'Grin and bear it' 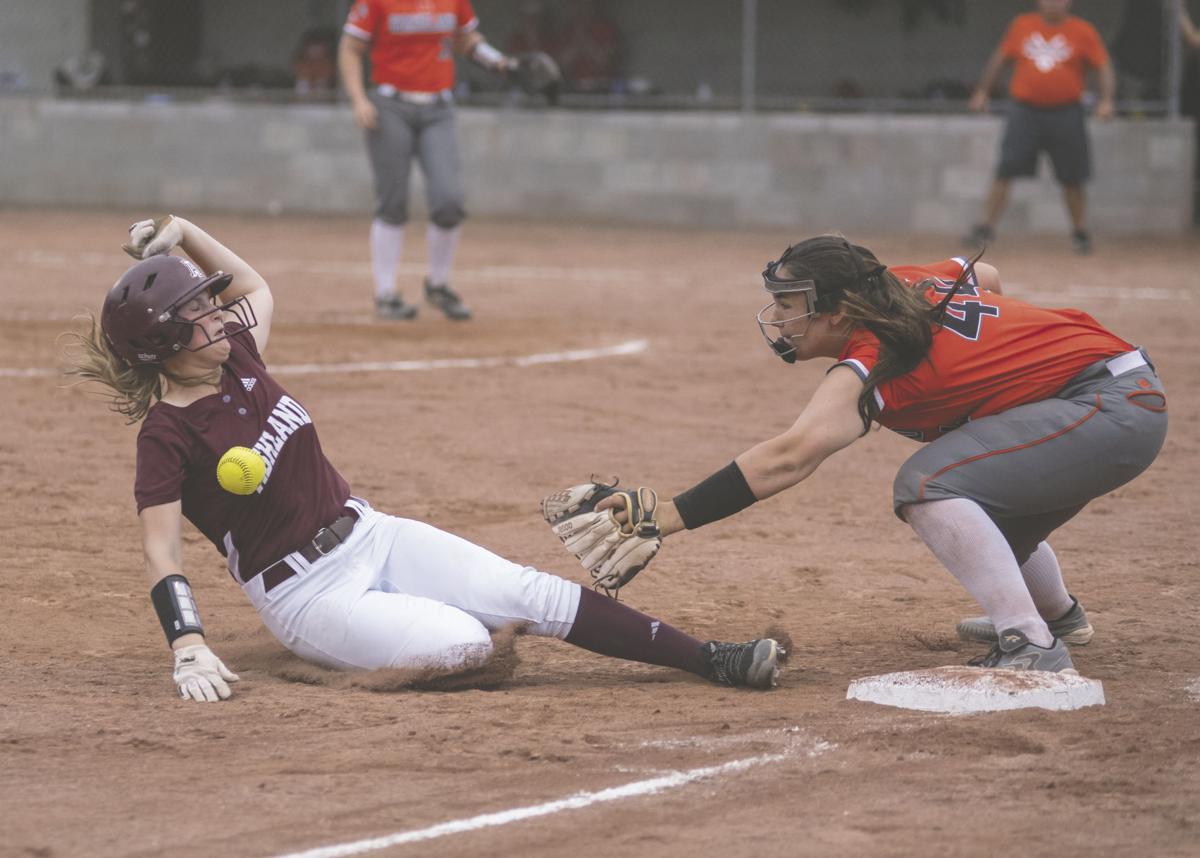 Ashland's Camryn Cassidy beats the throw at third as Raceland's Chloe Collins sets up to receive the throw during a game last season. Falecia Collier | For The Daily Independent 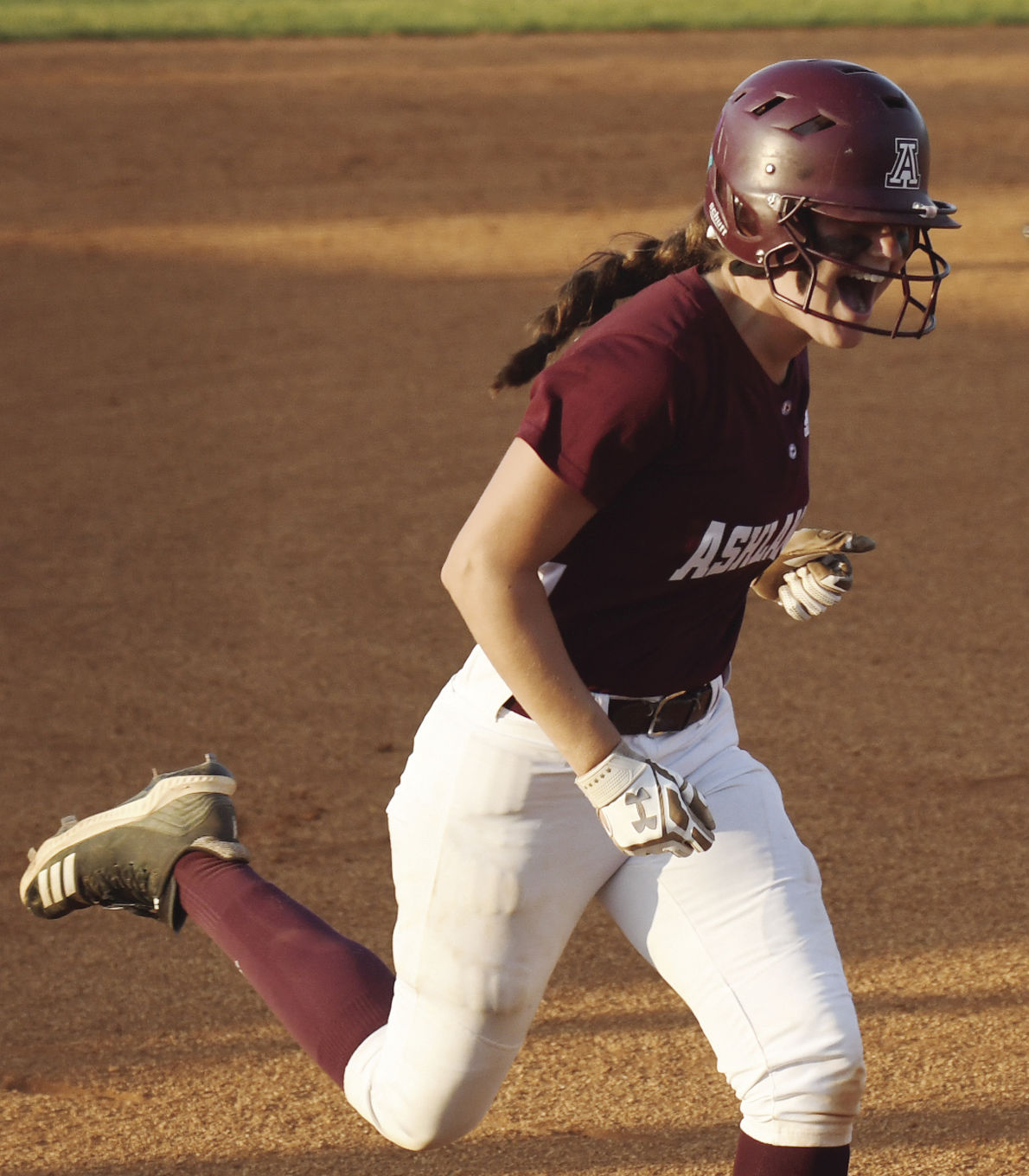 Ashland's Lauren Spears hit a homerun against Rowan County during the first inning of their 16th Region Tournament semifinal game on Monday in Cannonsburg. KEVIN GOLDY | THE DAILY INDEPENDENT 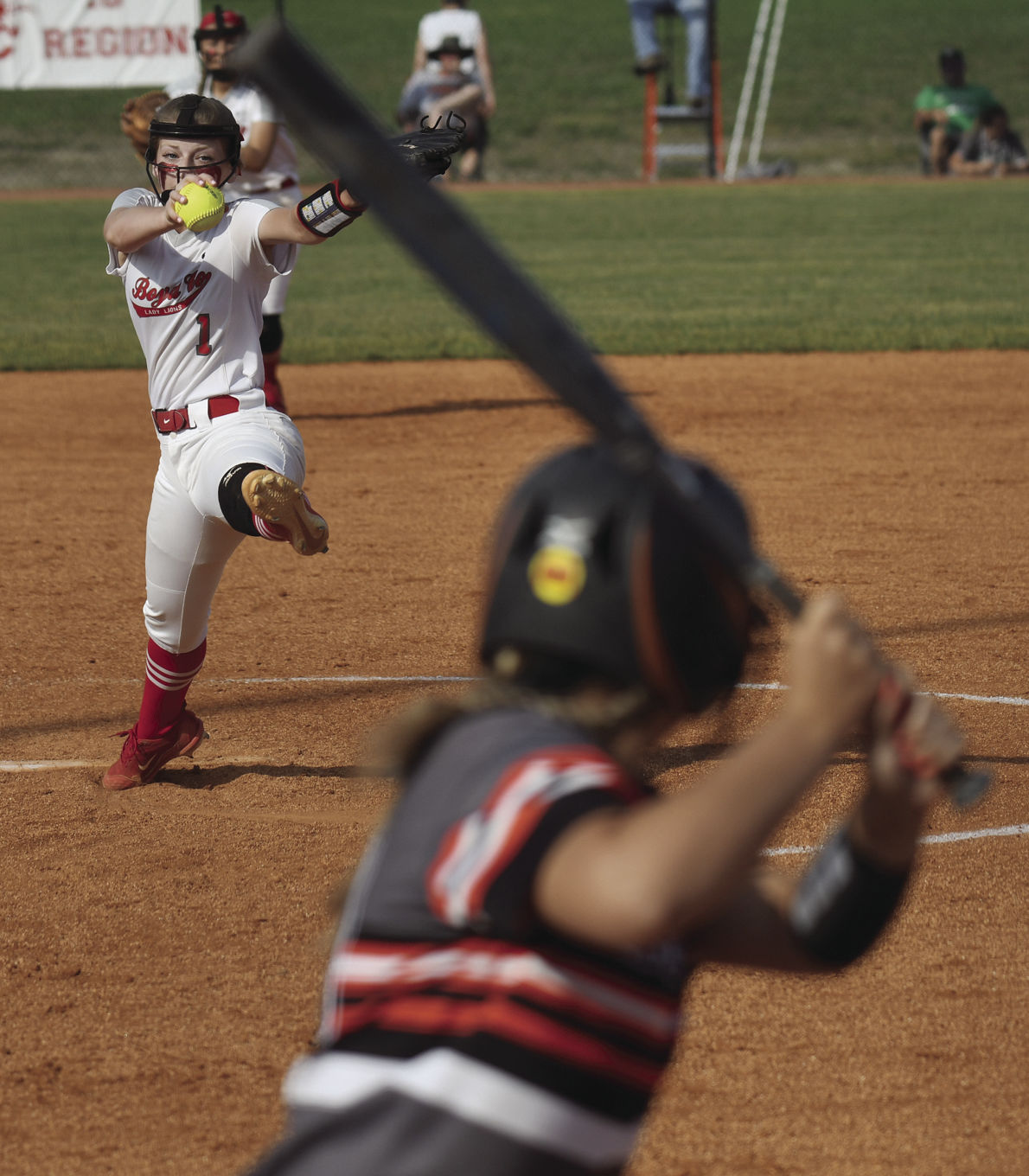 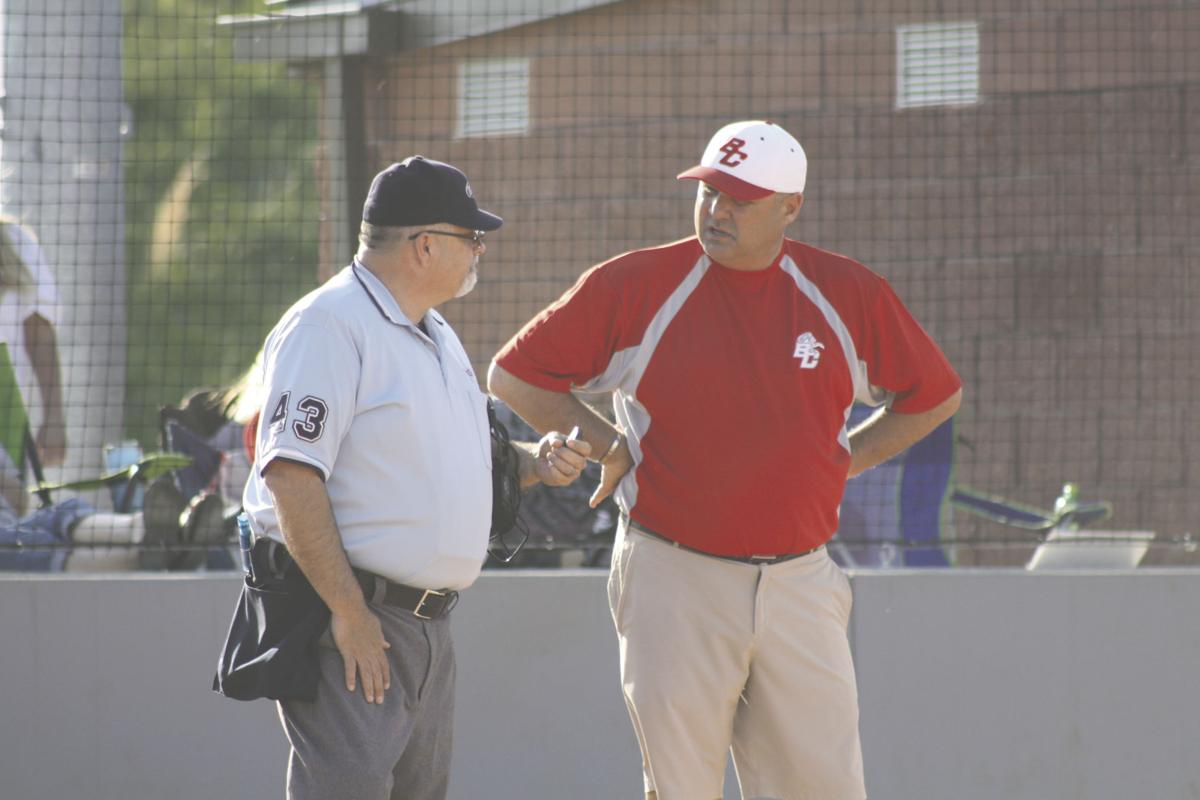 Ashland's Camryn Cassidy beats the throw at third as Raceland's Chloe Collins sets up to receive the throw during a game last season. Falecia Collier | For The Daily Independent

Ashland's Lauren Spears hit a homerun against Rowan County during the first inning of their 16th Region Tournament semifinal game on Monday in Cannonsburg. KEVIN GOLDY | THE DAILY INDEPENDENT

Ashland coach Scott Ingram lost five seniors from last year’s club and will be preaching patience to the Kittens to start the 2020 campaign.

Now he will have to wait a little longer to relay that message. The start of the spring sports season will be delayed to mid-April to hopefully stop the spread of the coronavirus.

“I want them to be patient with one another and with themselves,” Ingram said. “It’s just going to take some time. Our goal each year is to be playing our best softball at tournament time. We weren’t going to come out of the gate and be really good. But once we get some games under our belt, I think we will be right there in the thick of it.”

Boyd County and Ashland each posted 25 wins a year ago. The Lady Lions will sport a similar youthful roster with a mixture of experience as well, according to coach Dave Wheeler.

“There will be days where there might be all underclassmen on the field or playing in key positions,” Wheeler said. “It’s been a great group to be around. They work hard every day. We had 21 kids go through conditioning this winter. We averaged 18 girls a day. The turnout has been great, the attitude has been great and we were ready to go opening week, but it is what it is.”

Fairview will be experiencing a transition under first-year coach Bruce Gibson. The Lady Eagles feature a lineup that includes eight players that haven’t started a varsity game before.

“The team has been working hard, “ Gibson said. “We are young and inexperienced. … They were excited to get the season going. I told them as long as you’re getting better individually and developing skills we will become better as a team. We are going to do our best and that’s all you can ask for.”

Ashland concluded its season at John Cropp Stadium at the University of Kentucky in the state quarterfinals last season. It was the first year after the KHSAA changed the championship to a single-elimination format.

“That was a great experience for all of us,” Ingram said. “It was a lot of fun. I wish we had some better results. It will definitely help us, but it will be an adjustment. Those five seniors led the program the whole four years that they were here. This team wants to keep that going. They would like to put a little streak together and get back to playing at John Cropp Stadium on a regular basis.”

The Kittens does not have any seniors on their squad and will be playing with a new-look infield. Ingram said he expects this team to score in a variety of ways and be strong defensively. They will lean on the experience and leadership of junior catcher Lauren Spears.

“Lauren is going to drive the bus,” Ingram said. “She is the best player in the region. We go as she goes. We have a lot of weapons this year. … We are strong up the middle defensively. She was that (leader) even as a sophomore on that team with seniors. She was still an integral piece defensively and you’ve got to be as a catcher.”

Twin outfielders, Camryn and Tabitha Cassidy, along with pitcher Kenzi Robinson are all fourth-year junior players that Ingram said “have all picked up the leadership mantle in different ways.” Tabitha will handle the right-field duties and sister Camryn will beside her in center. Ingram is hoping for a “complete Cassidy season,” as both have battled injuries at different times.

Robinson and freshman Jada Erwin will both see time in the circle. They combined to hurl just two innings last year and need time to gain some experience.

“Kenzi has a variety of pitches,” Ingram said. “She changes speeds pretty well. When she’s on, she has a lot of movement on her pitches. She is really effective that way.”

“Jada has thrown really well all winter,” he added. “She’s just a freshman so she has to learn some things. She throws it really well too. We can go with either one of them and we will be in real good shape.”

Ashland will have three sophomores and a junior around the infield. Kaythan Baer will rotate to shortstop from the outfield. Ingram said she is a phenomenal athlete. Sophomore Katie Crouch will be a solid defender at first base. Taylor Hamilton at second base and Kendall Hilliard at third base will enhance the batting lineup. Junior Taylor Craft will bring an experienced glove to left field.

Wheeler will have several talented options to choose from when play resumes. Boyd County will have a deep team, according to its coach, and has worked on getting stronger in the offseason.

“We got in the weight room and we did a lot of work on conditioning and footwork,” Wheeler said. “We are learning our swing and we got a lot of bullpen sessions in. We have a lot of young pitchers. We will put a really good defensive team out there. We probably will have the best defensive team we’ve had since I’ve been coaching here. We have some girls that can really pick it and throw it across the infield. The competition has been really good.”

The Lady Lions will once again boast a large pitching rotation. Five hurlers picked up a victory inside the circle in 2019 and Wheeler said the number could grow to six with so many capable arms on the roster. He hopes it will pay dividends at tournament time.

“We aren’t running a marathon this year but a real sprint and that’s going to play big,” Wheeler said. “We can throw multiple kids out there and with the defense and a fresh face in the circle throwing, it’s hard to react to that. We do that on a regular basis.  We have six pitchers in the program that could be throwing a varsity game this year. That’s really a good thing. We can keep some kids fresh and gain experience with that.”

Wheeler there is plenty of competition for the No. 1 pitching spot. Chloe Watts, Tori Badgett and lefty Sara Bays all recorded multiple innings last year. Watts is coming back from an injury and Wheeler said she throws strikes and is learning to persevere when things go badly.

“We like to figure things out the first three or four games,” Wheeler said. “We will probably throw all three of the them the first day we play and have all three warm up. Whoever looks the best is who we will start off with.”

Watts is one of three seniors on the team. Olivia Mulhearn is a solid bat at first base. Sophia Smith can play multiple spots on the field.

Emma Borders is a talented outfielder and will be joined by Badgett and Bays when they aren’t pitching.

Juniors Kylie Peterman and Megan Castle are vying for time at third base along with Brooklyn Clevenger, who is also a candidate behind the plate along with up-and-coming seventh-grader Kyli Kouns.

“I like our nucleus,” Wheeler said. “I’ve told the kids, if you’re on the varsity team you’re a starter. Today you might not be starting, but tomorrow you might. Sometimes it’s based on who we are playing or what type of pitching it is. I’ve had girls go 3 for 3 one game and not in the lineup the next. It’s nothing they did wrong.”

Gibson is entering is his first season as varsity softball coach but he’s no stranger to the Eagles’ program.

He has coached multiple seasons in the little league system and is currently the middle school softball skipper. He has also coached football in Westwood for 17 years.

Gibson said the transition has been a smooth one due to his familiarity with the players. He hopes there is a comfort level with his young team after seven players from last year’s team decided not to play this season.

“This is a brand-new team,” Gibson said. “We’re starting a lot of freshmen and sophomores and trying to keep the girls motivated, letting them understand that this is a slow process. As long as we keep practicing hard, we will get better as the season progresses.”

The interest level is still high as Fairview tries to rebound from a 4-24 record in 2019. A commitment to their work ethic and effort on the field is what will catch their coach’s eye.

“How this season will go I don’t know,” Gibson said. “I just ask that they come in with high spirits and a great attitude when we step on the field and play their hearts out. Don’t worry about the scoreboard. As long as you’re playing and you are hustling, that’s all I care about.”

Sophomore Chelsey Powell is the only returning starter and the only one that saw any varsity innings last year.

“She will be a utility player and she hits the ball well,” Gibson said. “She’s had a knee injury. We’re working her slowly back into the group and play some infield.”

Gibson’s daughter, Shelby, with be at first base. Kiera Loving will man the corner at third base. Gibson will have eighth-grade pitcher Annabelle Menshouse inside the circle. The trio were on a state champion little-league team that advanced to the national regionals.

Aubrey Kitchen and Marista Tackett can fill several spots on the field. Jayln Smith, Grace Worthington, Hallie Staggs, Jaycee Mulkey, Destiny Woods, Belle Jenkins and Ashton Stidham were all mentioned by Gibson that could see time in the outfield. Seventh-grader Sydney Johnson will be behind the plate.

“All the girls are getting along, and they enjoy being on the field together,” Gibson said. “It’s a process. I have some girls that haven’t played since little league and I have one girl that’s never played before but decided to come out and represent her school.”

Coach’s outlook: “Our goal each year is to be playing our best softball at tournament time. We weren’t going to come out of the gate and be really good. But once we get some games under our belt, I think we will be right there in the thick of it.”

Coach’s outlook: “We are learning our swing and we got a lot of bullpen sessions in. We have a lot of young pitchers. We will put a really good defensive team out there. We probably will have the best defensive team we’ve had since I’ve been coaching here.”

Coach’s outlook: “We are young and inexperienced. I told them as long as you’re getting better individually and developing skills we will become better as a team. We are going to do our best and that’s all you can ask for.”