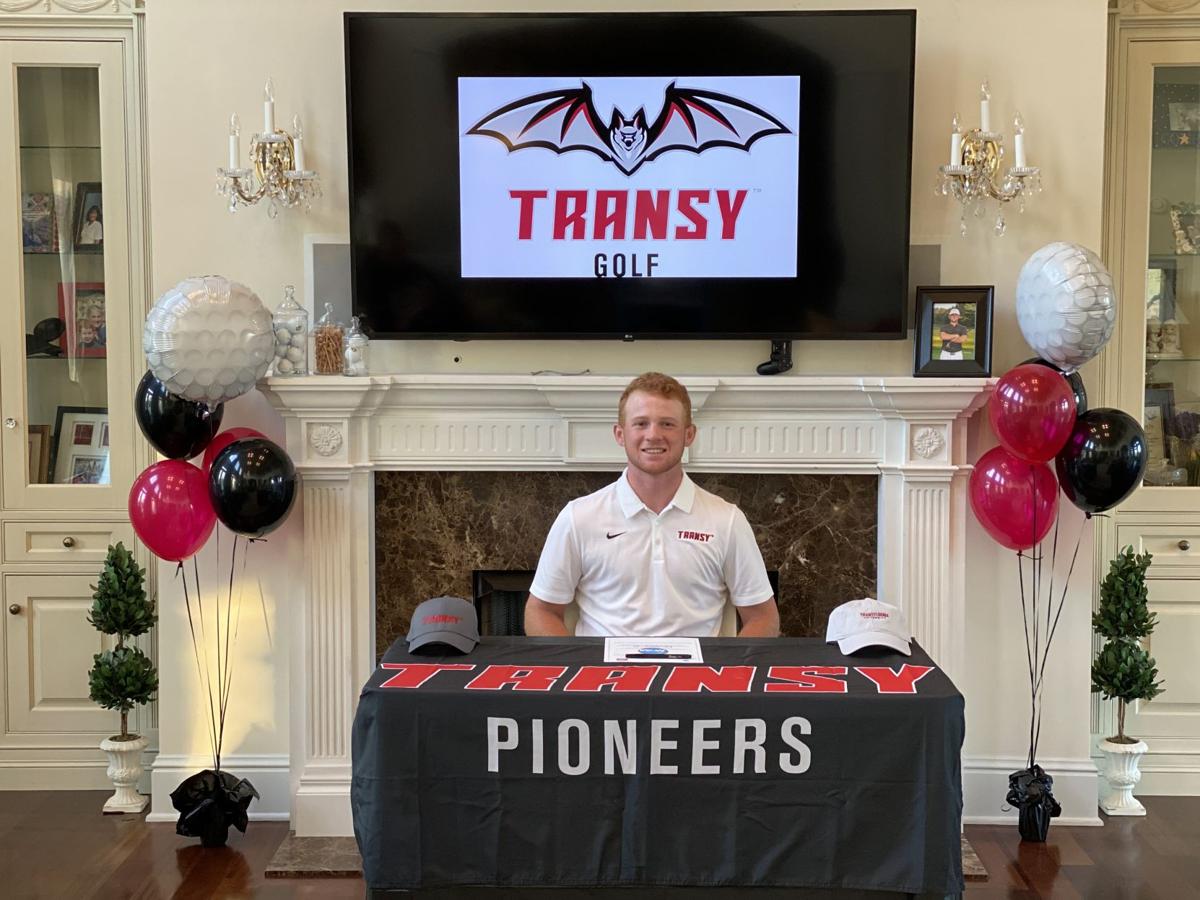 Greenup County's Drew Stultz poses before signing a letter of intent at his home to golf at Transylvania. 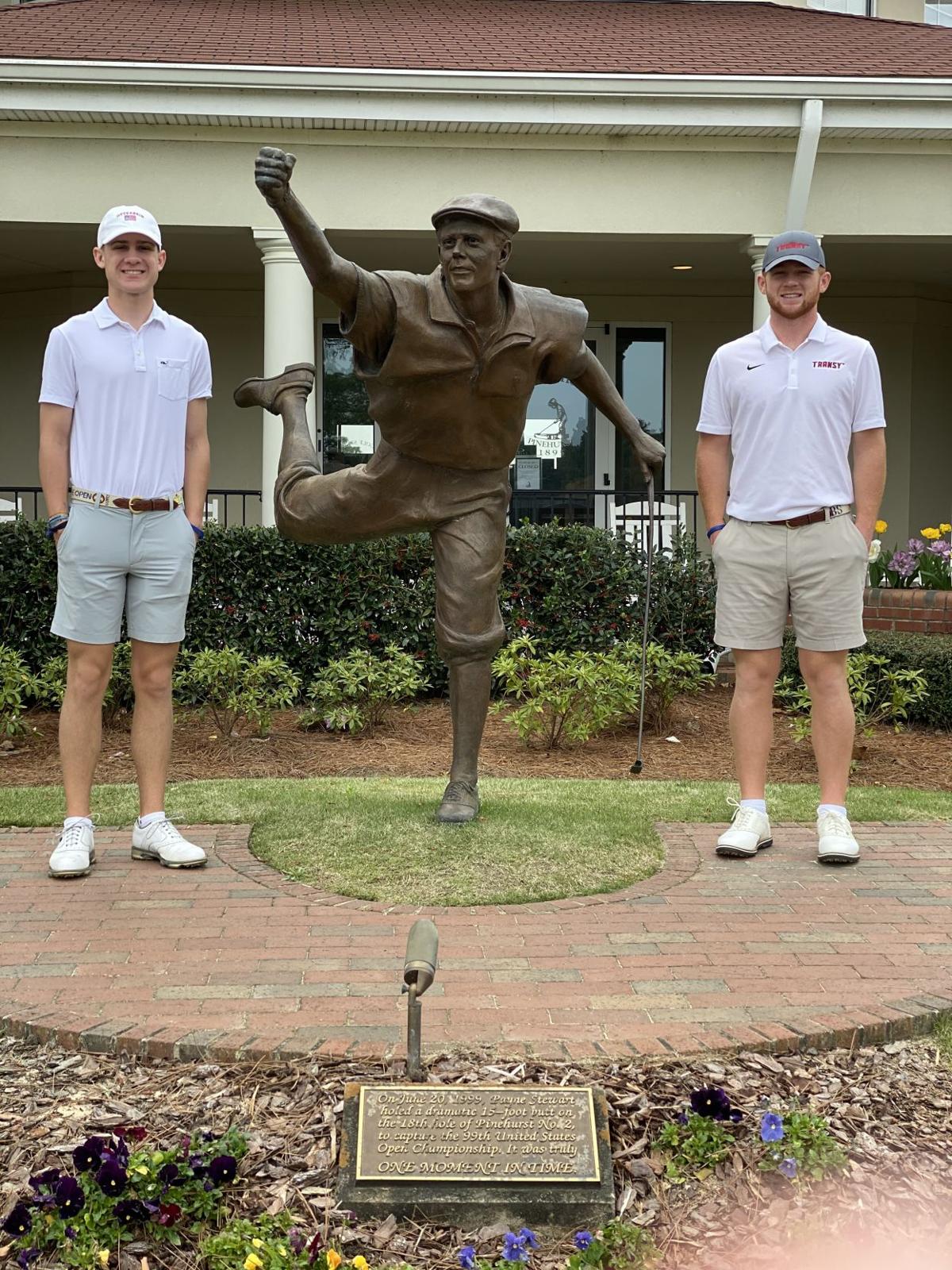 Dylan Stultz, left, and Brad Stultz pose with a statue of Payne Stewart at Pinehurst No. 2 in North Carolina.

Greenup County's Drew Stultz poses before signing a letter of intent at his home to golf at Transylvania.

Dylan Stultz, left, and Brad Stultz pose with a statue of Payne Stewart at Pinehurst No. 2 in North Carolina.

Drew Stultz had waited long enough. He chose to play through and begin the next round of his golf career.

The Greenup County senior decided not to delay one of the biggest events of his life anymore. With in-person school out due to the COVID-19 outbreak, Stultz and his most important supporters brought the festivities to the family room.

In front of his parents, Brad and Leslie, and his brother Dylan, Drew signed a letter of intent to play golf at Transylvania University last week.

“My original signing was supposed to be April 17 at the high school,” Drew Stultz said. “Now that school is shut down, I wasn’t sure when I could do it or if I would be able to do the signing if school opened back up or not. I just decided that I would go ahead and sign. It wasn’t the plan to have it at the house, but it was the circumstances that we were put under. I decided to sign and that was that.”

The television displayed the Pioneers logo on the screen behind him. A table was brought in and his mom took care of decorating the scene.

“I think every kid wants to sign in front of his friends and family at the school,” Brad Stultz said. “He was looking forward to that but it’s a weird time that we are going through right now. We just kept putting it off then he said, ‘Dad, I want to go ahead and sign.’”

“It looked good,” he added. “He had a background thing on his computer. We put it on the TV and a flag that he ordered for his dorm room on top of the table. It was his idea. Moms are always going to have their input on the way it looks.”

Drew has been playing varsity golf for the Musketeers since the fifth grade. He played basketball and baseball through junior high before the passion for golf took hold. Brad has been his coach during his time at the varsity level. Dylan followed suit during his sixth-grade year and Drew said it’s been a great bonding experience for the trio on the links.

“It’s definitely the one thing we all have in common,” Drew Stultz said. “It’s something we all love to do together. It’s been a lot of fun when I’m out on the golf course. I get to talk to Dad, not only as dad, but as a coach. He has pushed me so far and so has my brother. They both have helped me get to where I am now.”

Brad said he has seen his son grow around the sport of golf and has learned life lessons along the way while playing the gentleman’s game. Drew received valuable knowledge when he was younger with the experience of veteran players. Now, he in turn, enjoys providing guidance to players just starting out.

“He became friends with kids from Elliott County and he still talks to those kids,” Brad Stultz said. “They were six, seven years older than he was, then to see him transition, that was the thing that struck me as a dad. … They were taking the time to teach him the ropes. And to see him 180 and be that older kid and take those younger kids under his wing, it was a cool experience.”

Greenup County sent three players to the state tournament last fall in Bowling Green. It came in thrilling fashion as Drew, Dylan and Brett Bentley each survived a region playoff to advance. Drew made the cut to the second day on the big stage.

It would be the only round that Brad would see his son swing the club for a full 18 holes as a Musketeer. He is looking forward to changing that in Lexington.

“I would not trade anything for that amount of time that I got to spend with him and to watch him grow into this,” Brad Stultz said. “It’s become a true passion of his. You just hope as a dad that your kid finds something that they are passionate about and follow it. He has and I’m proud of him for that.”

Drew said he is proud of what the Greenup County program has become and the success the team achieved this season.

“It was awesome,” Drew Stultz said. “Three of our guys have played together since sixth grade and to have a foundation like that is pretty special. To have three guys go to the state tournament, not many teams can do that.”

Drew said he chose Transylvania for its high academic standard. The Pioneers’ home course is the University Club of Kentucky in Lexington.

“For them to have a great program like they do for golf and you add the academic part,” Drew Stultz said, “it was a real easy decision for me to make. Honestly, I didn’t have put much thought into it. I just knew that is was the best place for me to progress as a person and as a golfer.”

Transy golf has won the last 13 Heartland Collegiate Athletic Conference championships and was the overwhelming favorite to do it again before the spring portion of the schedule was canceled. Drew said another convincing factor was the confidence coach Brian Lane had in him, evident by a particular phone call in February after he committed.

“When I visited Transy, I knew that’s where I wanted to be,” Drew Stultz said. “I went to coach Lane’s office and we sat there and talked about the plan for the next four years. When I committed, I got a phone call from him. The first thing he said to me was, ‘We’re going to make you an All-American.’ As a player, it’s nice to have a coach that cares about pushing you to be the best that you can be.”

Brad said former Ashland player Evan Cox has been a great friend and inspiration for Drew and hopes his son can follow his same path. Cox started his golf journey at Virginia Wesleyan and won the DIII national championship as a sophomore before transferring to Kentucky.

Brad sees Drew benefiting from longer courses in college with his length off the tee.

“Evan has been a big influence,” Brad Stultz said. “One of these days, (Drew) will learn how to go low consistently. Once he does, that’s the big thing that Evan has talked to him about, just be patient and your time will come. Now he’s only 90 minutes away. We can go watch some of his tournaments.”

Before Drew can make some history in Lexington, the golfers all got the chance to play together on one of the most historic golf courses in the world — Pinehurst No. 2 in North Carolina.

It’s been the site of three U.S. Opens, the Ryder Cup and is the only course to have hosted all five of the USGA’s most coveted events. It’s slated to hold the Open again in 2024.

“I watch golf on TV all the time,” Drew Stultz said. “I’ve seen replays of the U.S Open at Pinehurst. When I’m walking No. 2, I can just see some of the shots I saw on TV and I can see them being hit on the course. It’s really cool to experience all the history that’s been there, all the great players that have walked that course.”

Brad surprised his two boys with the trip arrangements, and they left the following morning for three days at the end of March. Drew and his father have played at Pinehurst before, but it was Dylan’s first time.

Drew said he and his brother shared so much together over 18 holes. He was excited that Dylan could experience a round with him at the historic venue. Brad said Drew informed him that he wanted them all to be together on his senior trip.

“Up until last year, Dylan never felt like he really belonged,” Brad Stultz said. “Last year, he really blossomed on the team, then I watched them push each other to become better. They don’t hold back so I get to hear a lot of what they’ve got to say. Dads don’t hear everything. They’ve become a lot closer and I appreciate the opportunity that our family has had to grow and come together all due to the game of golf.”

Brad also said the weekend was another valued opportunity to bond with his boys, but not for him on the scorecard during some friendly competition.

Drew will keep working with his swing coach, Larry Ward, who will now only be minutes from his new campus. He plans on majoring in business at Transylvania. He has aspirations of life on the pro tour before becoming a teaching golf pro.