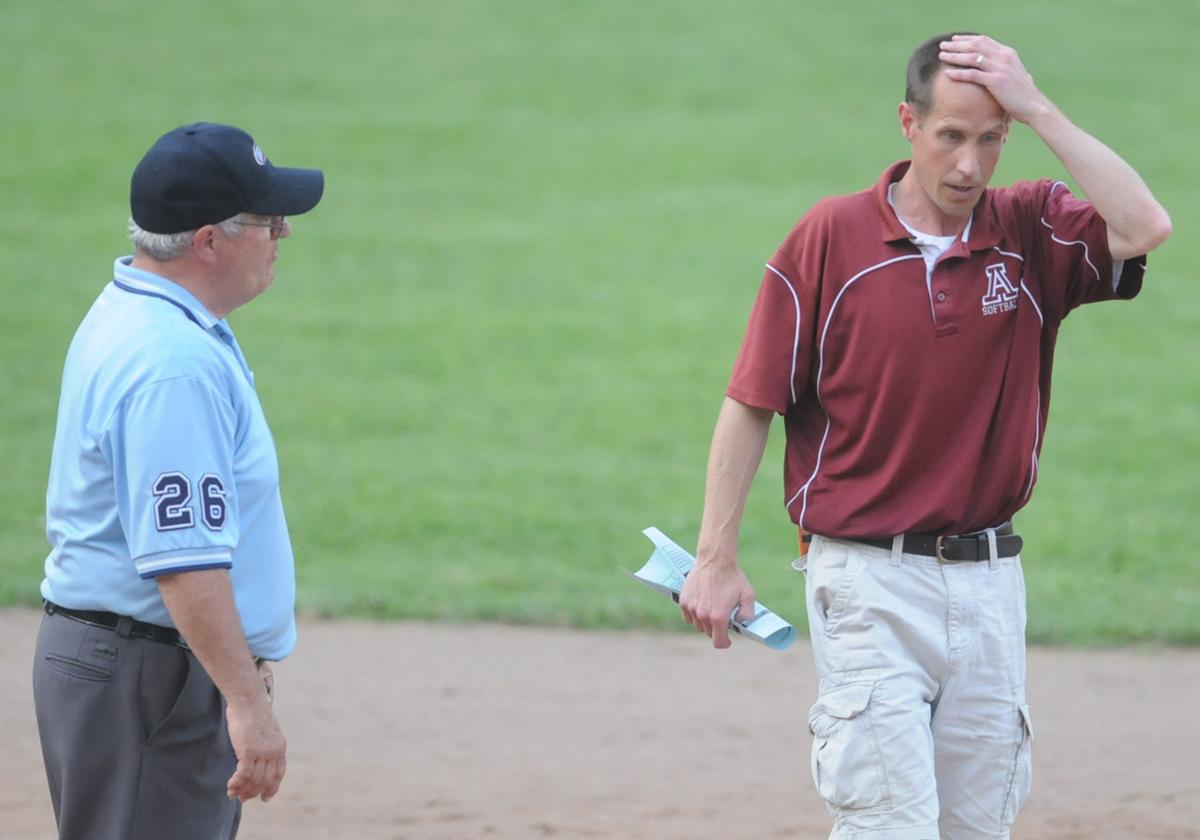 Ashland softball coach Scott Ingram reacts to an explantion of a call during the fourth inning of the 64th District championship, Wednesday in Cannonsburg. KEVIN GOLDY | THE DAILY INDEPENDENT 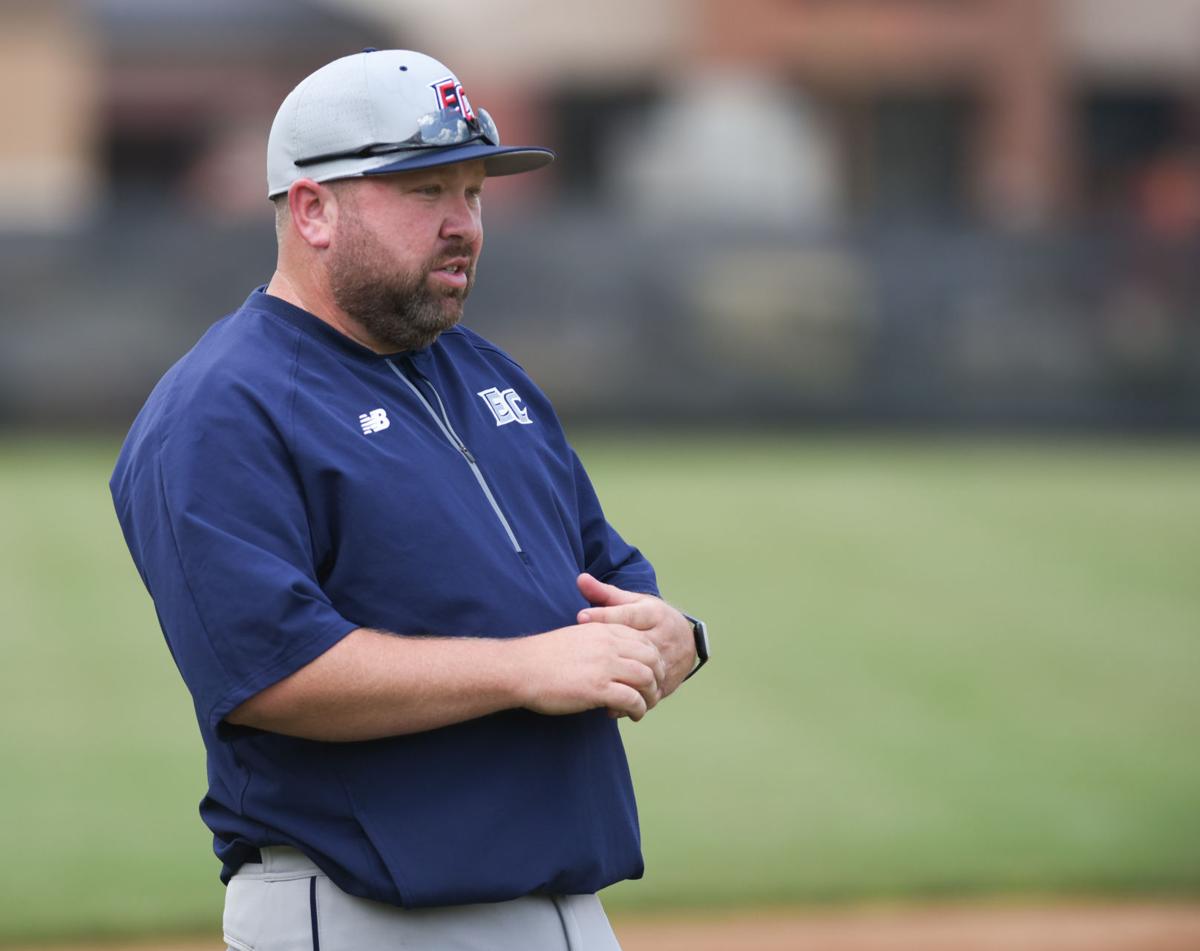 Ashland softball coach Scott Ingram reacts to an explantion of a call during the fourth inning of the 64th District championship, Wednesday in Cannonsburg. KEVIN GOLDY | THE DAILY INDEPENDENT

As he answered interview questions by phone on Friday morning, Scott Ingram kept an eye on a video stream of his daughter, Zoë, playing for the University of Pikeville's softball team.

Ashland's softball coach made certain to watch that because it was the Bears' last game for at least the month. Ingram won't be coaching either for the immediate future: minutes after that interview, KHSAA commissioner Julian Tackett informed schools via email that all sports are in a dead period, effective immediately through April 12, in an effort to slow the spread of coronavirus.

"No nothing," Ingram said. "No use of facilities, no work on the facilities, and I feel like we're in some kind of alternate universe, man. I don't know. Crazy."

High school baseball and softball regular seasons were set to begin Monday, with 12 of northeastern Kentucky's baseball teams and five softball squads scheduled to compete on opening day. Tennis season is already underway, track and field competition was well into its transition from the indoor to the outdoor season, and basketball season hasn't technically concluded. The girls Sweet Sixteen was suspended indefinitely five games into the tournament on Thursday. The boys state tournament, which was to be next week, is also postponed indefinitely.

All are now on hold in what East Carter baseball coach Jeremiah Shearer called an unprecedented move -- at least during his coaching career.

"This is 20 years for me as either assistant or head coach," Shearer said. "We've not seen anything close to this. We've had weather-related cancellations and possibly early in the season maybe a flu cancellation or something. We've never had anything like this. Kind of uncharted territory for us."

The KHSAA has long instituted a two-week dead period in the summer, during which no use of school facilities, activity or contact between athletes and school staff is permitted. This dead period will be the same, except that contact is allowed between coaches and players, Ingram said.

The decision for a dead period was made including guidance from Gov. Andy Beshear, public health officials and the Kentucky Department of Education, Tackett wrote in an email provided to The Daily Independent by an area coach. The KHSAA will reconvene with the same people before April 11 to re-evaluate.

The KHSAA has no plan to cancel spring sports championships, Tackett said, "but that obviously merits consideration, even with potentially abbreviated seasons."

Numerous school districts across northeastern Kentucky had already decided to shutter spring sports programs for extended periods before the KHSAA's order. Boyd County, Morgan County, Carter County, Elliott County and Rowan County did so on Thursday. Ashland and Lawrence County announced such plans on social media or confirmed them in interviews earlier Friday.

Boyd County's baseball team was one of a handful that canceled a planned spring-break trip of its own volition. The Lions had been bound for Myrtle Beach, South Carolina, but the trip was called off on Thursday morning.

"Each day it became more and more clear that the only responsible decision there was would be to cancel our annual spring training trip to Myrtle Beach," Boyd County coach Frank Conley said. "Not something anyone wanted to do, but the way things are trending worldwide, nationally and locally regarding COVID-19, it was the correct decision.

"I explained to our players that the concern wasn't for their immediate health, but for the transmission and spread of COVID-19 to the elderly or with those fighting other illnesses. They are fine young men and they understand the bigger picture. There are many unknowns with this virus, and those unknowns translate to our world as baseball coaches."

Conley and Shearer both mentioned the disappointment of their seniors in particular to lose their last spring-break trip.

"It's more than baseball," Shearer said. "People's health, people's lives are what we're talking about here, so they understand. I told them when this is all over, hopefully we can get together as a team, even if we just take a trip somewhere for a couple days and do something together. Maybe we can do that."

Ashland's softball team got a scrimmage in against Spring Valley on Thursday night. It was bittersweet, Ingram said, because of what everyone anticipated was coming.

"We had a good night last night," Ingram said. "It's obviously good to get playing again against some competition. You give them the postgame (address), everything that we did well, and oh, by the way, we probably won't be doing anything for two weeks."

It proved to be longer than that, and baseball and softball coaches rapidly went from planning for imminent lidlifters to trying to figure out how to keep players sharp in case games are playable after the hiatus.

"It's frustrating," Shearer said. "We got kids that just came out of basketball. We're trying to get those guys ready. We stressed to our kids yesterday, you're on your own. Our facilities are closed, but there's no reason you can't go throw with somebody in your yard. You got a brother, a dad, get those arms going. Keep throwing.

"We're all in the same boat, so it's a level playing field here."