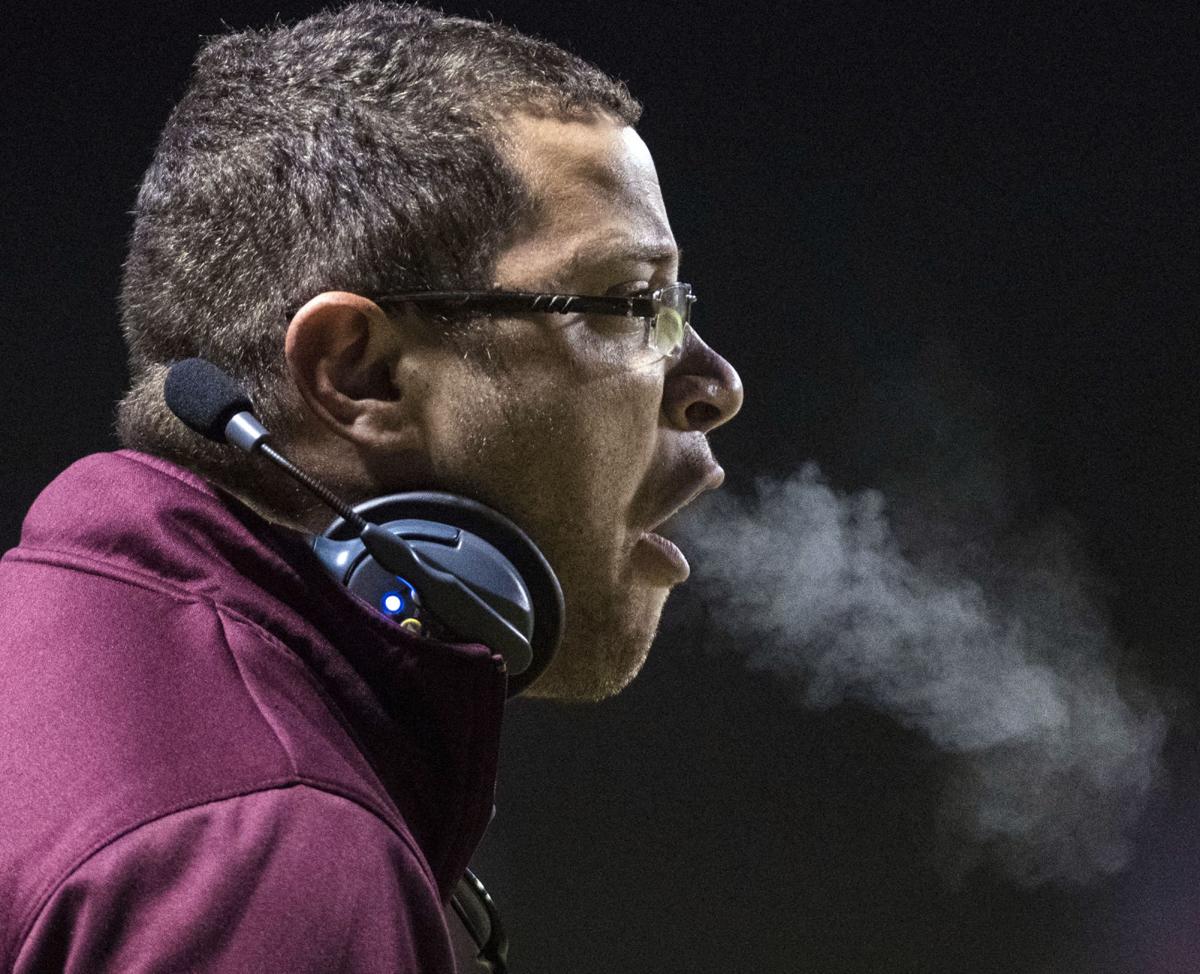 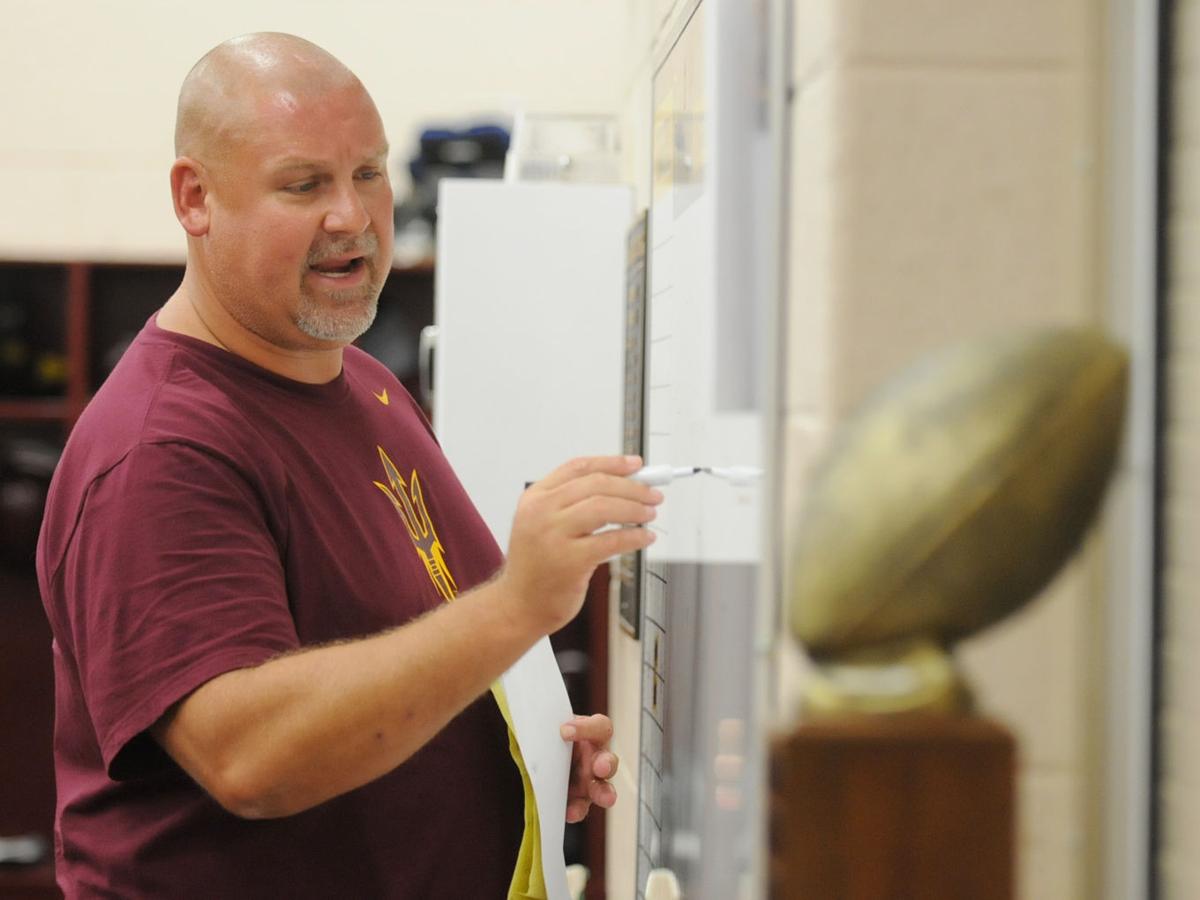 Russell head football coach T.J. Maynard draws plays on the white board during a practice session. KEVIN GOLDY / THE INDEPENDENT 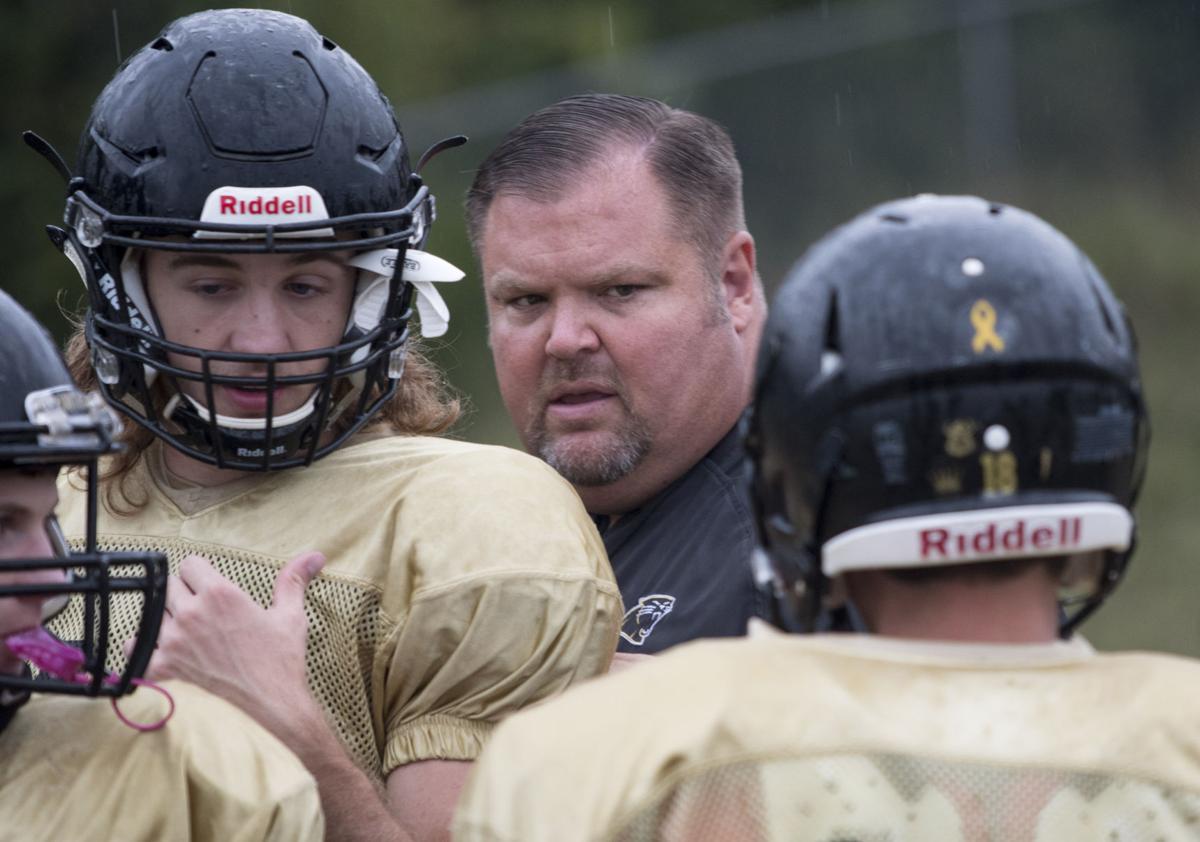 Russell head football coach T.J. Maynard draws plays on the white board during a practice session. KEVIN GOLDY / THE INDEPENDENT

T.J. Maynard, Daniel Barker and Bill Spencer would like it to have a hint of a northeastern Kentucky twang.

The Kentucky Football Coaches Association is forming an elected council for what is believed to be the first time, said Buchanan, who recently began a two-year term as KFCA president.

“(The KFCA hasn’t) been very effective for a long time because we’ve all been divided,” said Buchanan, Mercer County’s coach. “This will at least give us one voice. It’ll be a democratically elected voice, and at least now, when somebody says, 'Well, what do the football coaches think?,’ we can give them an answer instead of 30 answers.”

The council will be composed of 12 coaches serving four-year terms — two from each of the six KHSAA classes; one of those from each class’s group of four easternmost districts and one from the four western districts.

Buchanan expects for ballots to be distributed to head coaches across the state this morning, with the voting deadline Tuesday at noon.

Russell’s Maynard, West Carter’s Barker and Spencer of Fleming County are the three area coaches among 48 nominees across the state. Barker is running mano a mano against Shelby Valley coach Anthony Hampton in Class 2A’s eastern half, while Maynard and Spencer seek the nod from a Class 3A east field of five that also includes Belfry’s Philip Haywood, Mason County’s Jonathan Thomas and Garrard County’s Jerry Perry.

Asked what they hoped to accomplish if elected, the three northeastern Kentucky nominees agree on at least one point.

“I’m thankful for the nomination,” Barker said, “and I really would like to (be elected) to give a voice to our area.”

Concurred Maynard: “Our demographics and makeup will be different than when you talk about the big cities. So we’ll make sure that the eastern part of the state has a voice and a say in what’s going on.”

And Spencer: “If I end up being on it, I just want to make sure that people in our area are represented, and the things we feel concern us are brought to the table.”

One of those things that concern coaches, locally and statewide, is the series of changes to the KHSAA football playoff procedure over the last few years. The most recent of those were the introduction of intra-district play in the first two rounds of the postseason and a ratings percentage index (RPI) to determine matchups and locations for the two rounds of the playoffs after that.

Buchanan — familiar to veteran observers of area football because his Mason County teams from 1996-2014 frequently met northeastern Kentucky programs in district, Eastern Kentucky Conference and postseason play — is prominently outspoken against the intra-district format. He pointed to its implementation, despite at best mixed feedback toward the idea from coaches on the KHSAA football advisory committee, as an example of a need for a unified platform.

“Really, we’ve been needing this for a long, long time,” Buchanan said. “I think last spring, when we saw the big disconnect between the advisory committee and what actually happened, I just think it made it clear the coaches had no voice whatsoever, and we had to fix that.”

Spencer and Barker cited last week’s publicly live-streamed Board of Control meeting as evidence of differing needs and priorities at schools in different parts of the state. A council with representation from all over the commonwealth will honor that, they said.

“There were all kinds of different issues from different areas of the state,” Barker said. “And the way that the council will be set up, I think everybody’s voice will be heard. It’s kind of a way for everybody to be represented and everybody to be heard maybe in a way they never have before.”

Added Spencer: “I think it’s important that you have a wide scope of people, to make sure the things in their area are taken into consideration.”

Buchanan credited South Warren assistant Tyler Mattingly with authoring the plan for the council. Buchanan doesn’t know yet what the relationship between the KFCA president and council will look like or any specific mechanism for the council to amplify its voice.

“I sort of want to let democracy do its thing,” Buchanan said. “I want to let those 12 guys get elected and then move forward to be a voice and try to do whatever’s best for Kentucky high school football. ... It’s gonna be what those 12 guys think, and they’re representing the coaches in their part of the state. We’ve gotta let them do that.”

Buchanan noted that, in terms of KHSAA policy-making, the KFCA and its president and council haven’t “got a single bit of power, we really don’t, but at least now when people want to know what the football coaches think, we’re gonna have an answer.”

KHSAA commissioner Julian Tackett promised regular availability to the council and said the KFCA has kept his office apprised through the process.

“We have lots of great coaches associations,” Tackett said. “The football group has kept us informed as they have reorganized and developed a smaller group of long-time leaders to be sure all geographic areas and classes are well represented to help strengthen communication with their coaches. That is especially helpful in these difficult days. We will be regularly available to this new, streamlined council, as we are with many of our coaches associations. We have already talked about getting together with them to gather information as we all navigate this coming summer and look forward to it.”