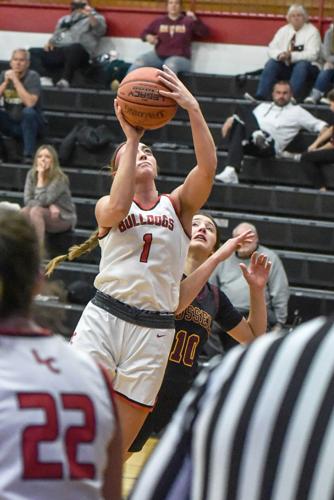 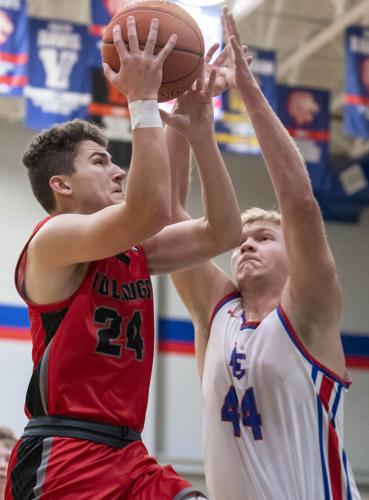 Lawrence County’s Will Lafferty drives to the basket as Lewis County’s Drew Noble defends on Jan. 14. 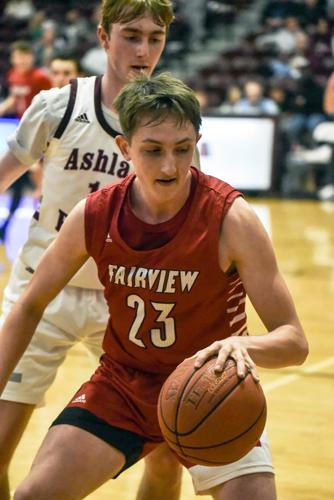 Fairview’s Steven Day controls the ball against Ashland on Dec. 6. 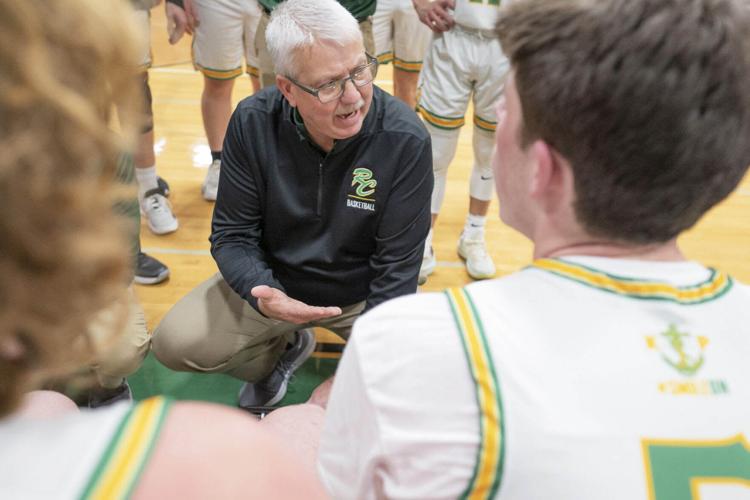 Rowan County coach Shawn Thacker talks to his Vikings during a timeout against Boyd County on Dec. 1.

Lawrence County’s Will Lafferty drives to the basket as Lewis County’s Drew Noble defends on Jan. 14.

Fairview’s Steven Day controls the ball against Ashland on Dec. 6.

Rowan County coach Shawn Thacker talks to his Vikings during a timeout against Boyd County on Dec. 1.

Kensley Feltner wants to be kept in the dark when it concerns her scoring achievements.

The star senior and Miss Basketball candidate has been lighting up scoreboards for six seasons at Lawrence County and achieved another milestone in point production last week in a game against Betsy Layne.

Feltner was aware that she was approaching 3,000 career points last year against Morgan County and admitted she played one the worst game during her Bulldog tenure.

“I knew I was 17 points away and it was the worst 17 points I ever scored,” Feltner said. “I was pressing to score. I missed six layups, and I was playing terrible. It was just a mess. This season, I knew I was 900 away (from 4,000 points). If I can stay within myself and try not to do anything extra, I think I can get it. I can achieve it.”

The future Belmont Bruin reached another career highlight after she tallied 21 points against the Bobcats. The guard passed former Boyd County star Savannah Wheeler on the state’s career scoring list and changed the top spot on the northeastern Kentucky chart.

Feltner currently sits at sixth on the state list and has her sights on climbing even higher.

“I’ve looked up to Savannah Wheeler my whole playing career,” Feltner said. “We never played against each other because my seventh-grade year was her senior year. They were really good, and we were not great. I watched her play Marshall and now Middle Tennessee. They played Belmont and I watched that game. It’s truly a blessing and I’m thankful everything that I’ve accomplished.”

“It shows that people from eastern Kentucky play ball,” she added. “A lot of people don’t give us that credit because we don’t have a big Lexington or Louisville city around us. We’ve had the opportunity to play on big stages this season and turn some heads. We have been playing very well and at a high level. We know what it takes to win.”

Coach Melinda Feltner and her staff did not inform her of the scoring feat against Betsy Layne until the contest was over. Her coach and mother knew her guard could handle the information either way.

“Obviously, through the years, it’s been tough at times,” Melinda Feltner said. “We let her game speak for itself and try not to bring too much attention to it. We are definitely very proud of her. She has worked her tail off to get to where she is. We’ve had a great relationship with each other, and it’s gelled from there. I feel like she’s handled the whole situation pretty well. She’s very humble.”

Kensley Feltner said the whole team has matured this season and are playing as a unit. The experience of coming one game short of their ultimate goal last season has them fueled to take the final step this year.

The senior wants to concentrate on team goals and the individual ones will take care of themselves.

“I’ve tried my best not to worry about that side of things,” Kensley Feltner said, “because if you are so consumed with it, shots are harder to fall and everything just seems harder. It’s just not good for me or the team. Winning is the ultimate goal. I do want to achieve those (individual) goals, but I think I’ve done a really good job this season keeping my distance from them.”

Melinda Feltner said Kensley sets the example with her work ethic. It’s made an impression with her teammates, but it doesn’t mean her coaches will let up on her during practice.

“It’s been a special blessing for all of us,” Melinda Feltner said. “It’s like a double-edged sword. It can be the toughest day at times because we expect so much out of her. She gives it every day. She works hard and we’re also the hardest on her than anybody we have.”

“When we do a drill at practice, she’ll run more than anybody else,” she continued, “and then after practice she’s like, ‘My goodness, what in the world?’ You still have to run, and everybody will know that they need to step it up. We want to get to Rupp Arena (for the state tournament). That’s the goal this year.”

Lawrence County holds a 15-4 record after picking up a district win over Floyd Central on Friday and defeating No. 9 Anderson County, 50-46, in Louisville on Saturday.

She only trails former Hazard player, Carolyn Alexander, by 40 points to move into the top 5 on the state’s all-time scoring list.

— Wheeler keeps making headlines at the next level. The former Boyd County and Marshall guard was named to the Midseason Watchlist for the 2023 Becky Hammon Mid-Major Player of the Year Award last Wednesday.

The Middle Tennessee junior is one of 15 players on the list that represents 14 schools and 11 conferences.

Wheeler has helped guide the Raiders to a 16-2 record and a 9-0 mark in Conference USA. Middle Tennessee is currently riding a 14-game winning streak.

“It felt pretty good,” Day said to The Daily Independent reporter William Adams on Friday. “And I did it off a dunk, which was the first dunk of my career.”

“When Tanner (Johnson) threw it across the court, and I went up,” Day said, “I was thinking in my head that this is my sixth point (of the night), so when slammed it, I was filled with excitement.”

Former West Carter guard Megen Gearhart was named the 2003 Miss Basketball and helped lead the Comets to the 2000 state championship as a freshman under the direction of coaching great John “Hop” Brown. Gearhart was part of a roster that won five district and region titles and was named to the All-State team three times.

Gearhart also won three straight 16th Region Tournament Most Valuable Player Awards. She stands at No. 2 on the Comets’ scoring list with 2,711 points before going on to play at Morehead State.

Berry was inducted into the Greenup County Hall of Fame in 2016 and earned Coach of the Year honors from the Kentucky Association of Pep Organization Sponsors in 1979 and again by American Cheerleader Magazine in 2000.

The Hall of Fame ceremony will take place in Lexington on April 30.

— Lawrence County’s Will Lafferty stole the show and the game from visiting Floyd Central at the Dawg house on Friday.

With the score tied at 60-60, the senior swiped a Jaguars inbounds pass at halfcourt with 1.9 seconds left, and in one motion, sent it back towards the Lawrence County goal. It found the bottom of the net and the on-court celebration ensued after the 63-60 win.

The Bulldogs faced a four-point deficit with 21 seconds left, according to Bulldogs coach Chandler Thompson. Hayden Perry was the catalyst of the quick comeback with two made 3s to knot the score and set the stage for Lafferty.

“Friday night was one of the wildest finishes that I have ever been a part of in my time coaching,” Thompson said. “Coming out of the (final) timeout, our main goal was to not let Floyd Central get a clean look at the buzzer. Will Lafferty made a great read on a long pass and was able to deflect it. To be honest, at that point, I was just happy to know that Floyd Central was not going to get a chance to win it at the buzzer. Will tracked it the ball down and threw it up from deep. … We are so happy that we were on the winning end of it.”