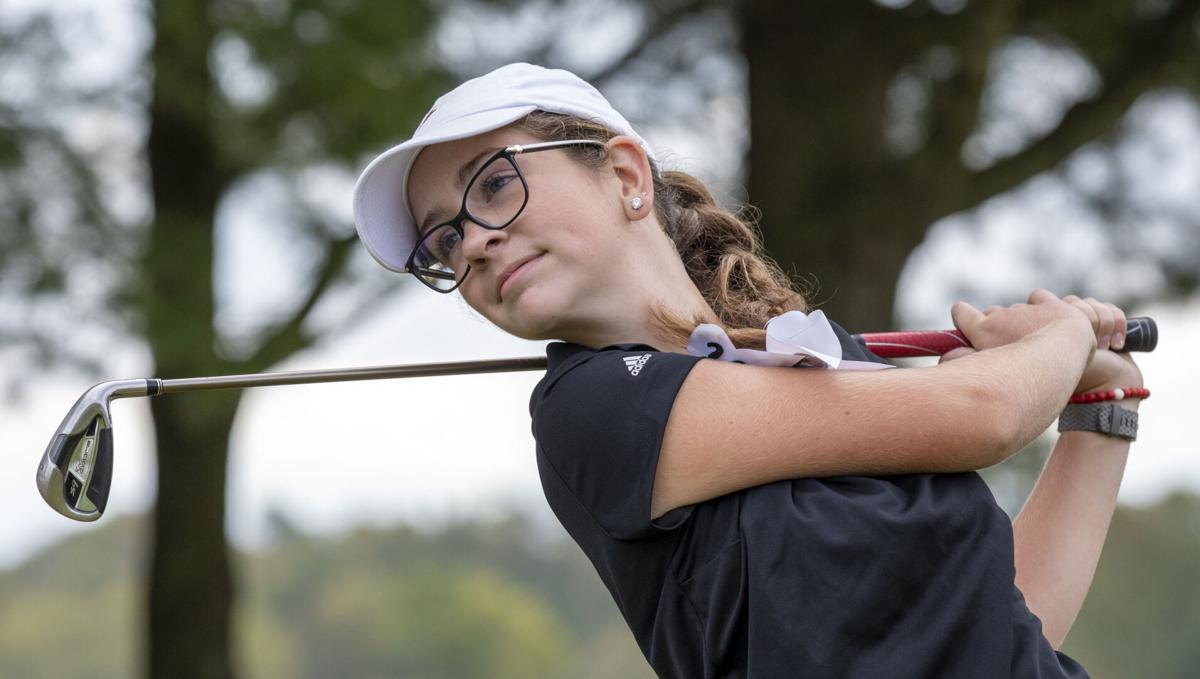 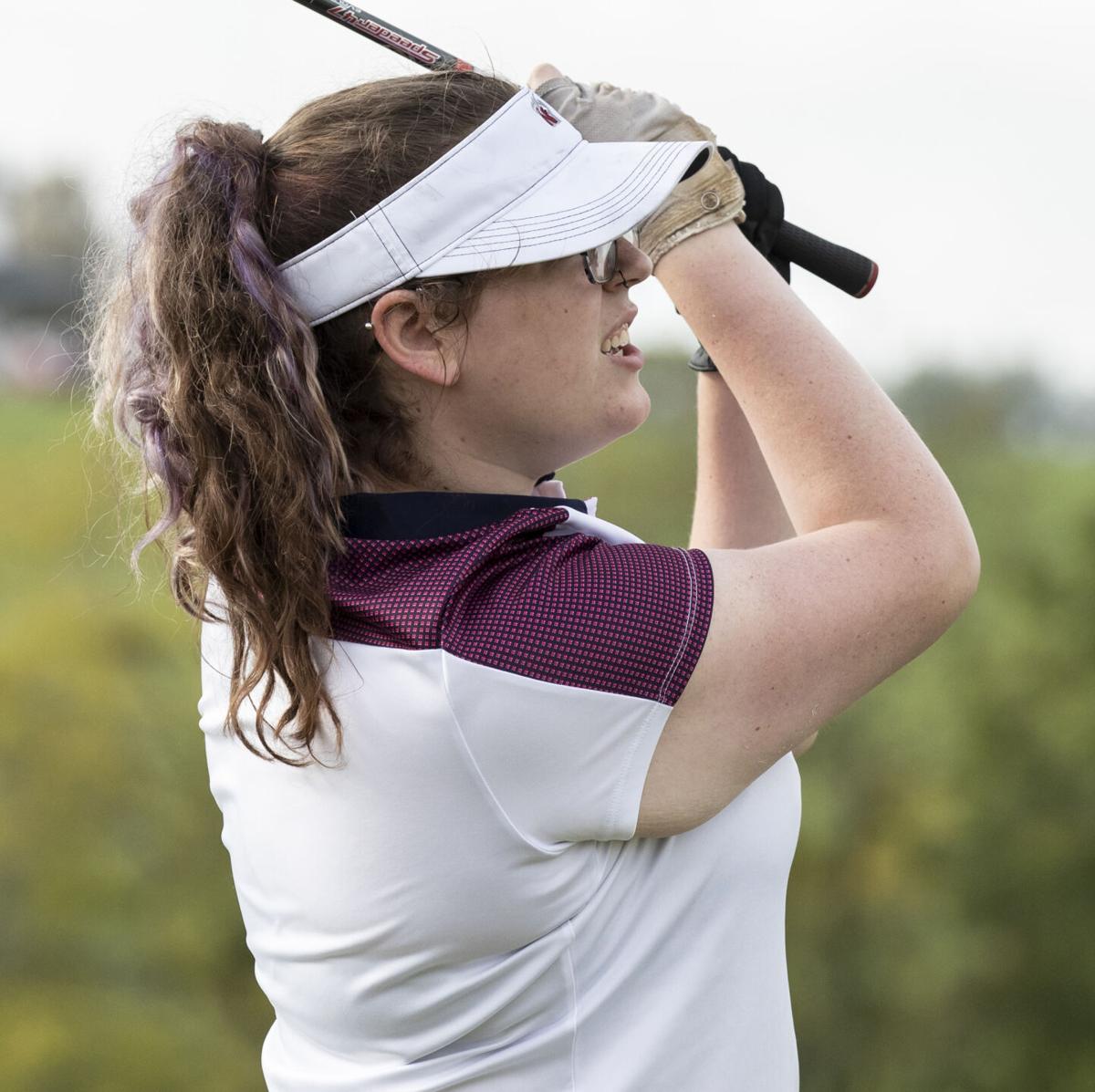 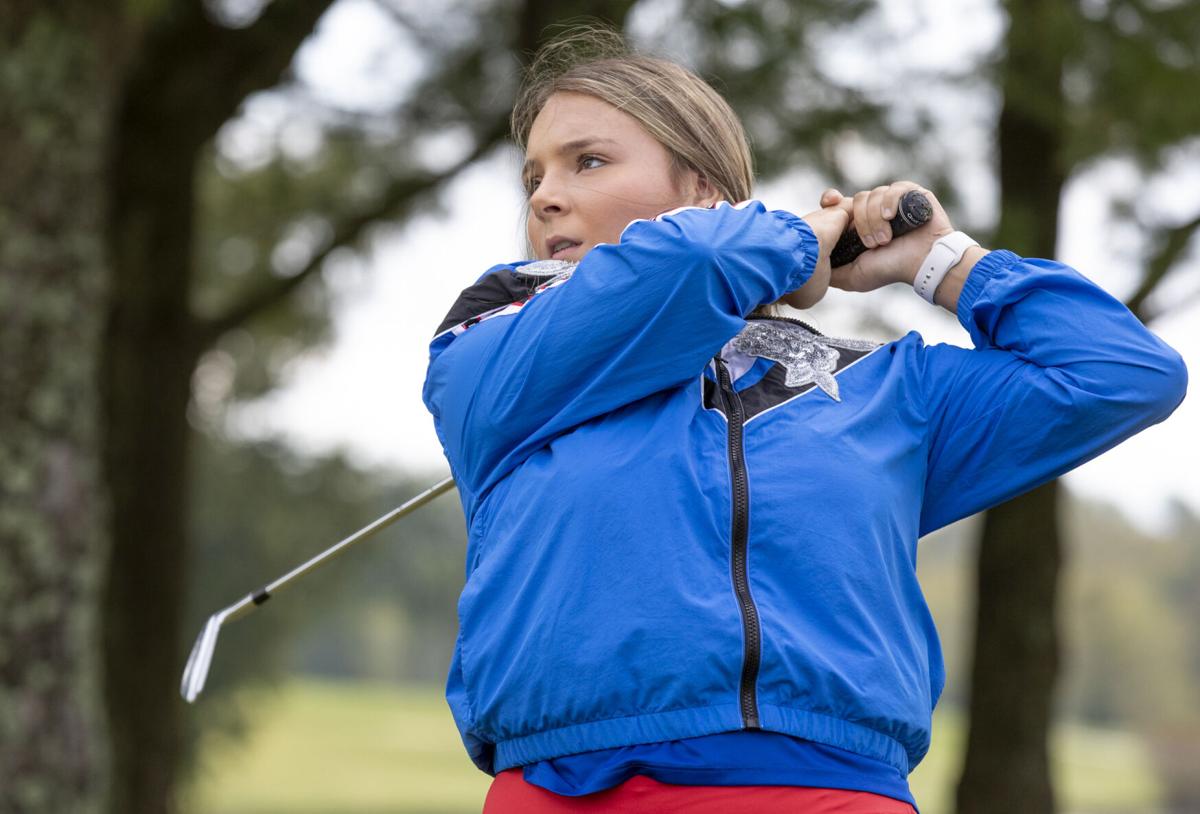 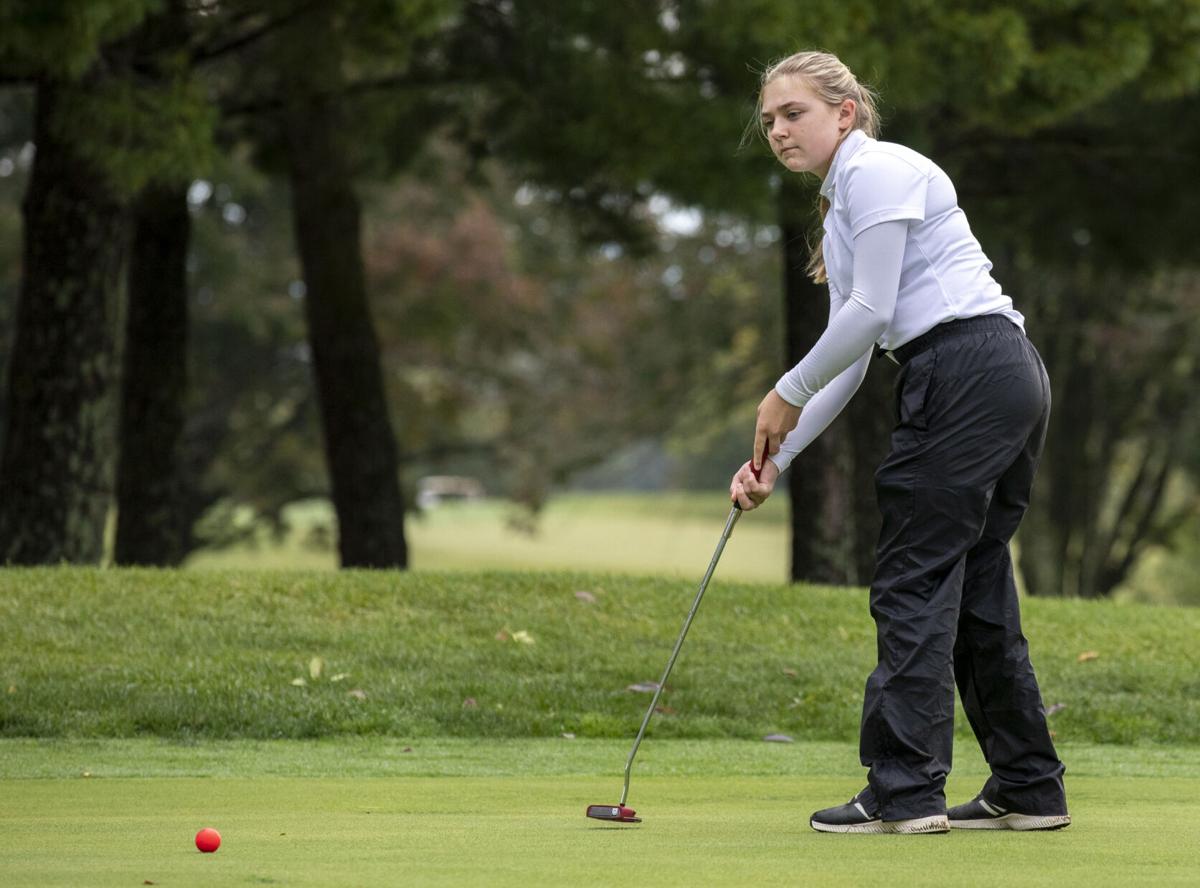 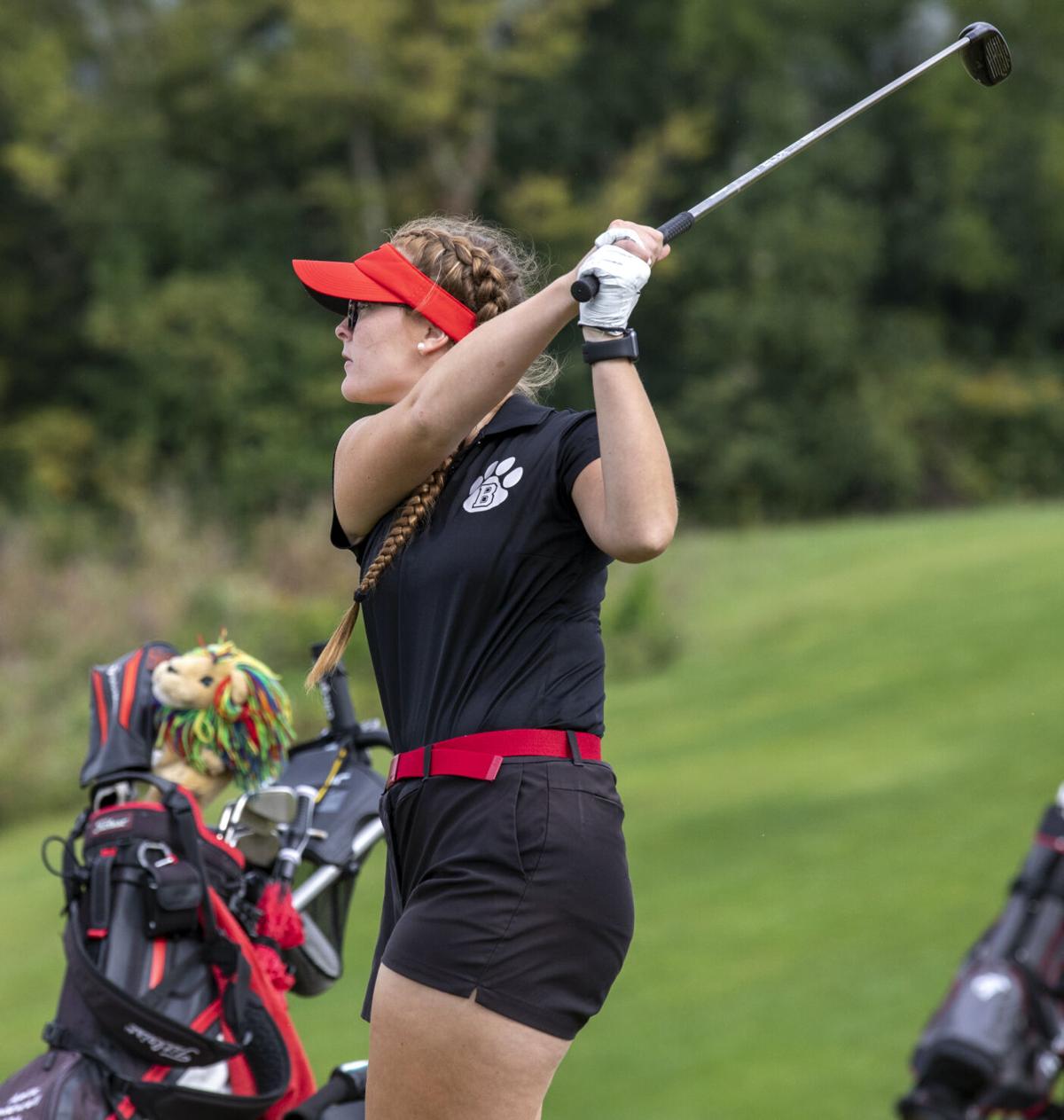 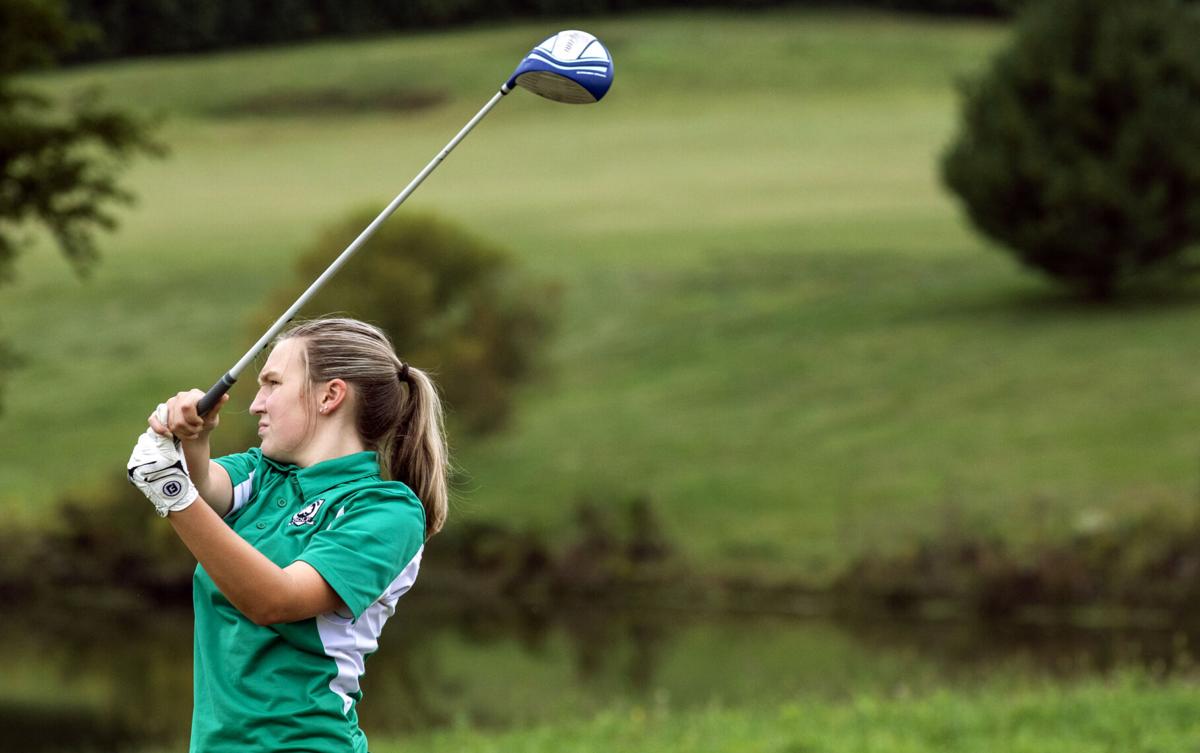 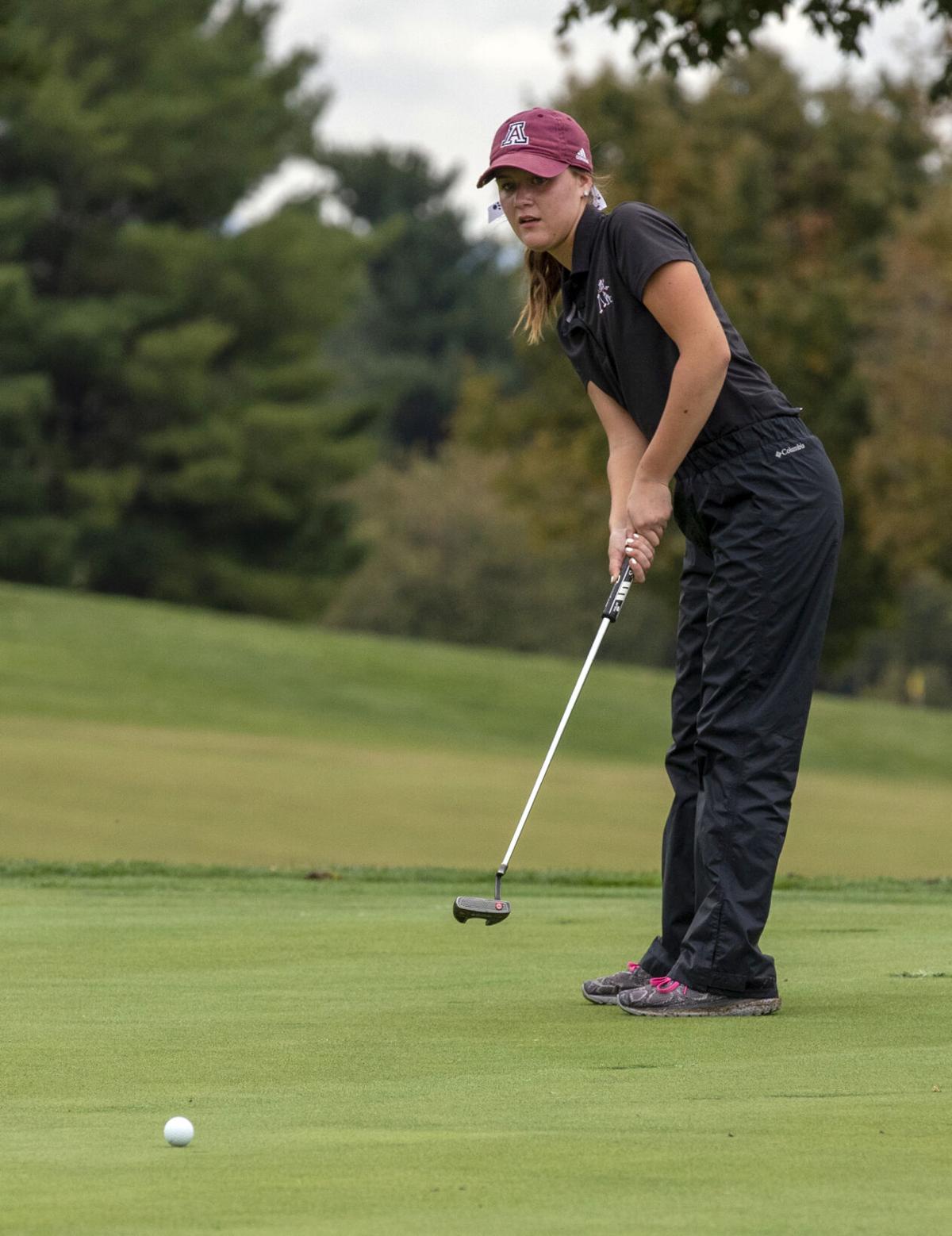 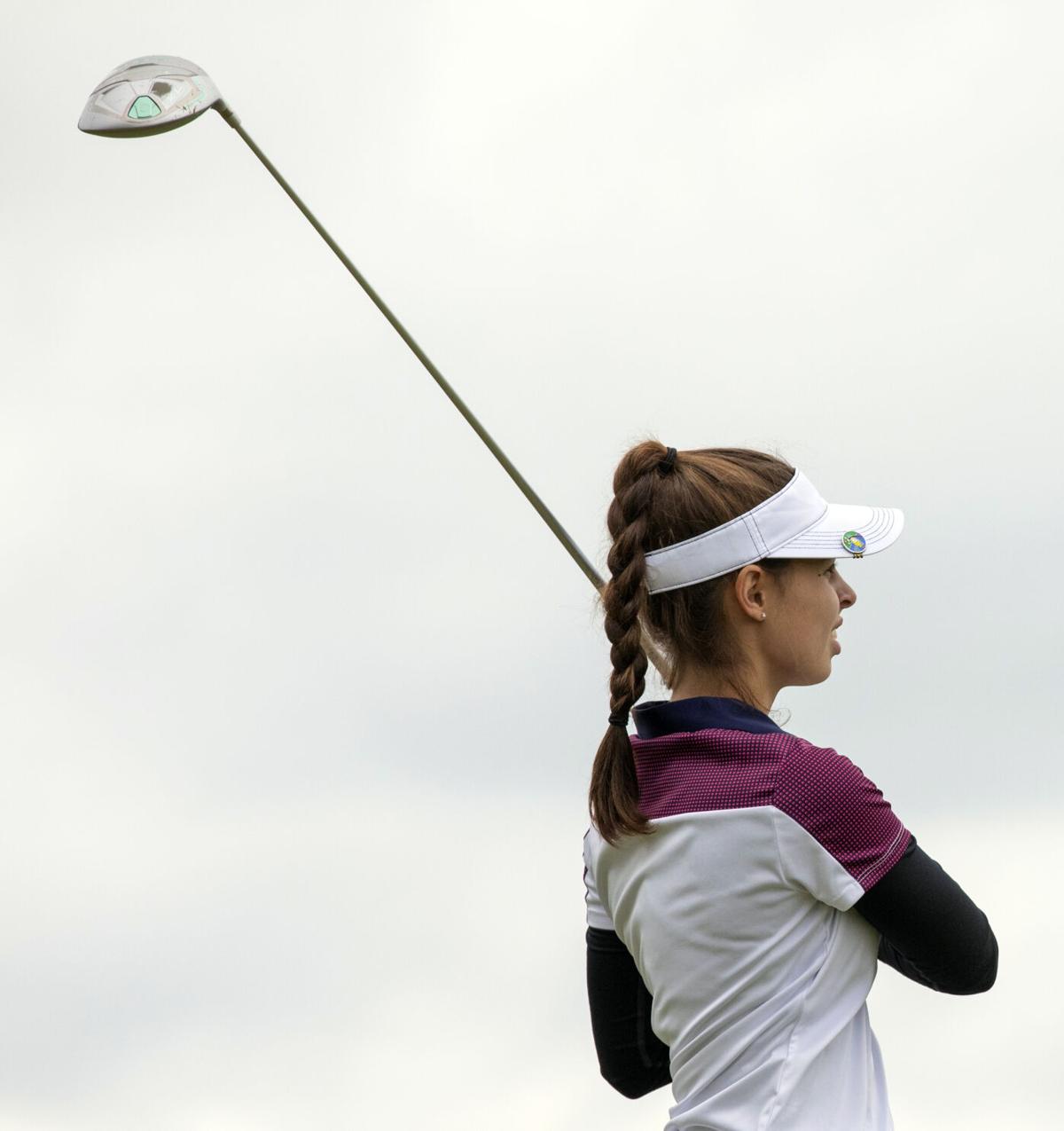 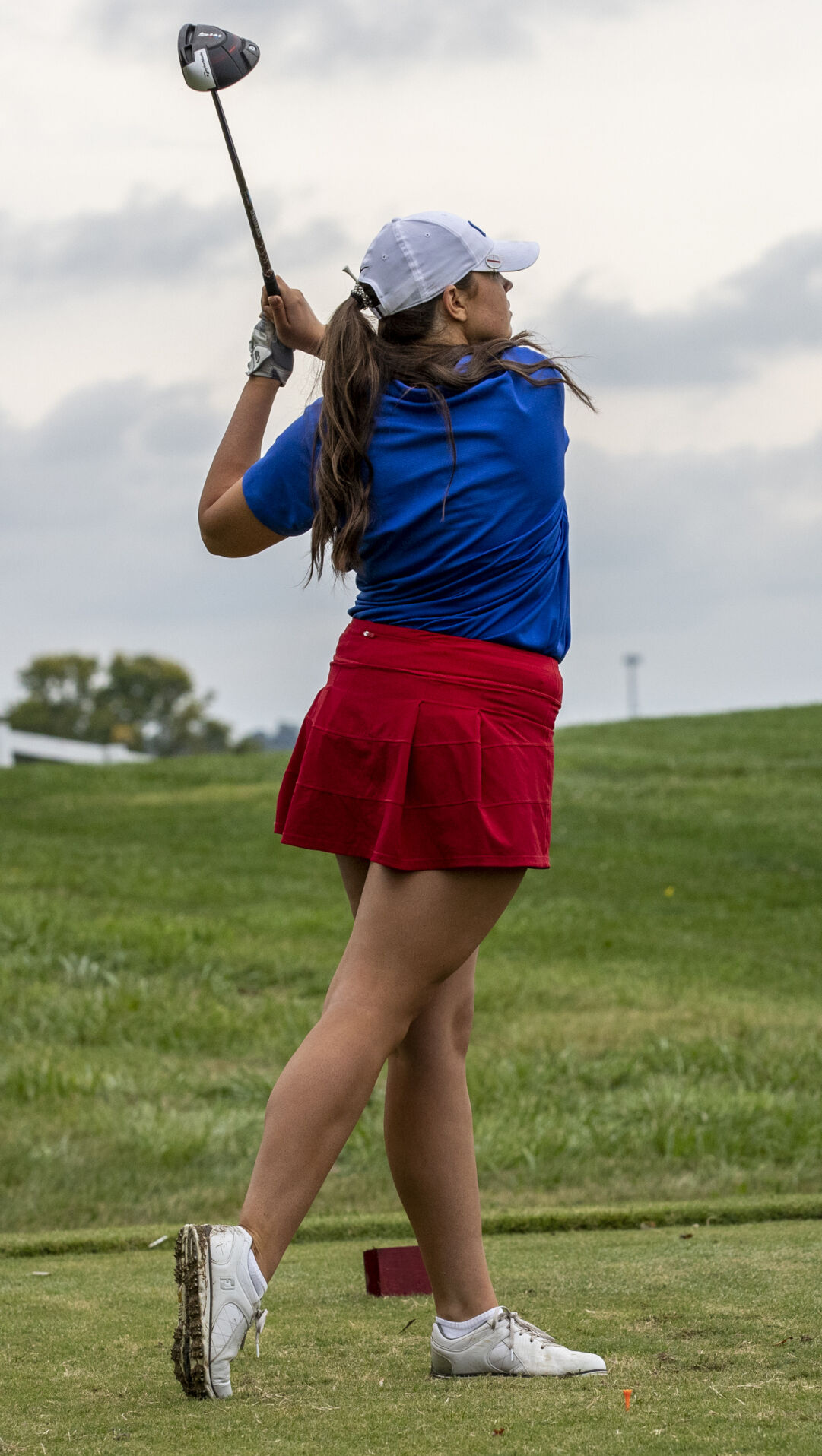 Montgomery County’s Madison Back hits a drive during the girls region golf tournament at Acorns Golf Course in Mount Sterling on Tuesday. 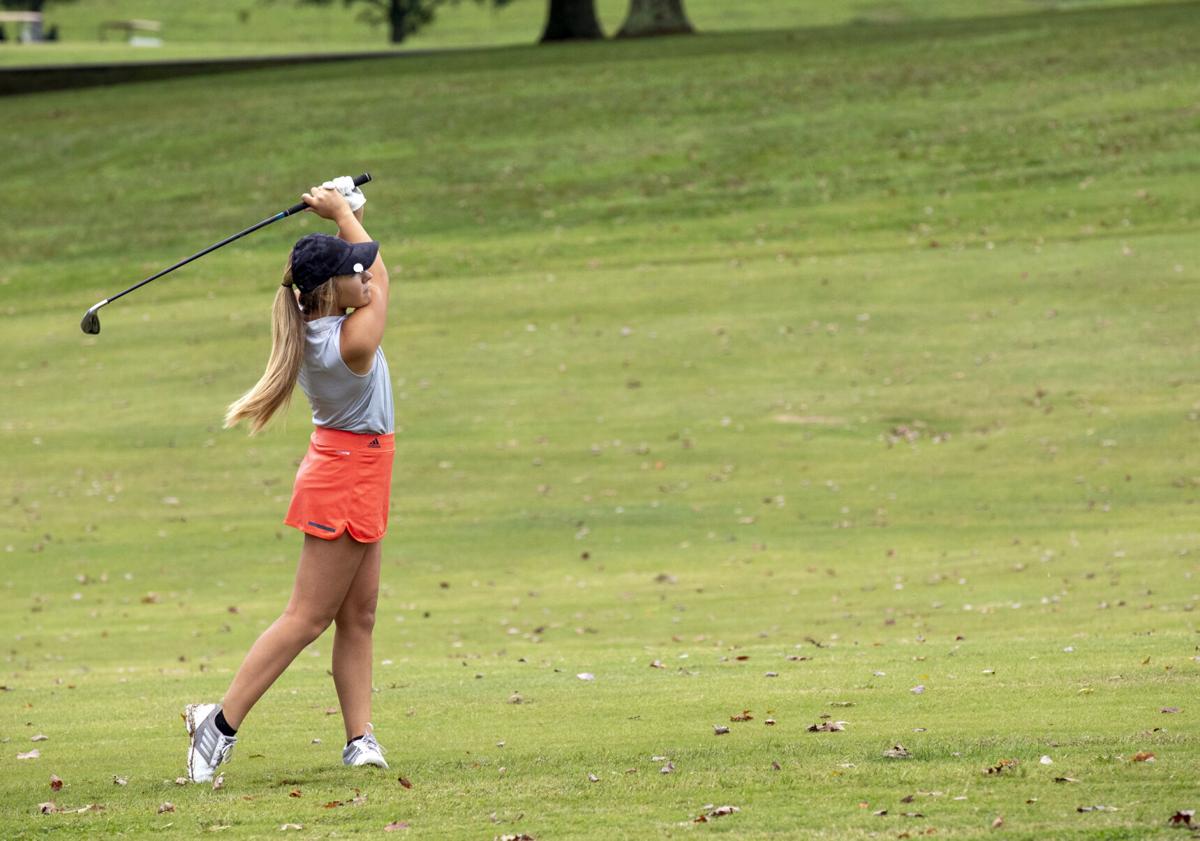 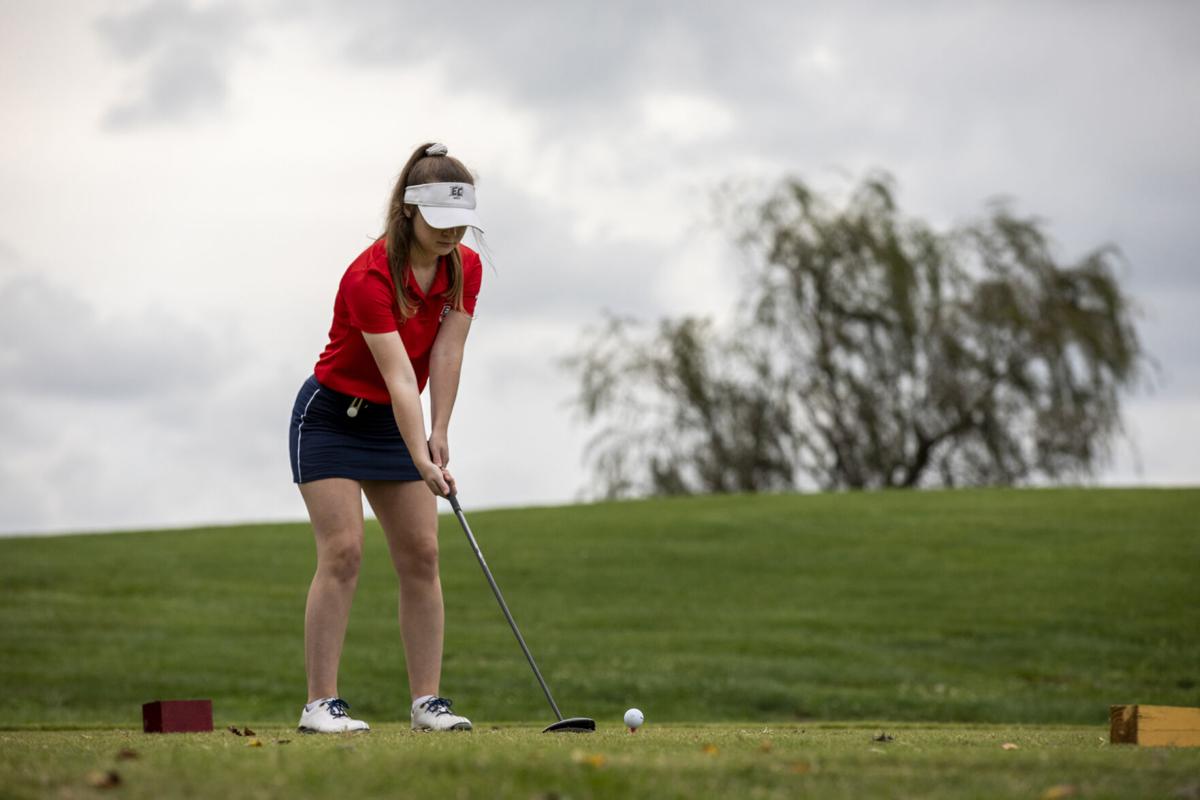 East Carter’s Addison Lewis sets to tee off during the girls region golf tournament at Acorns Golf Course in Mount Sterling on Tuesday. 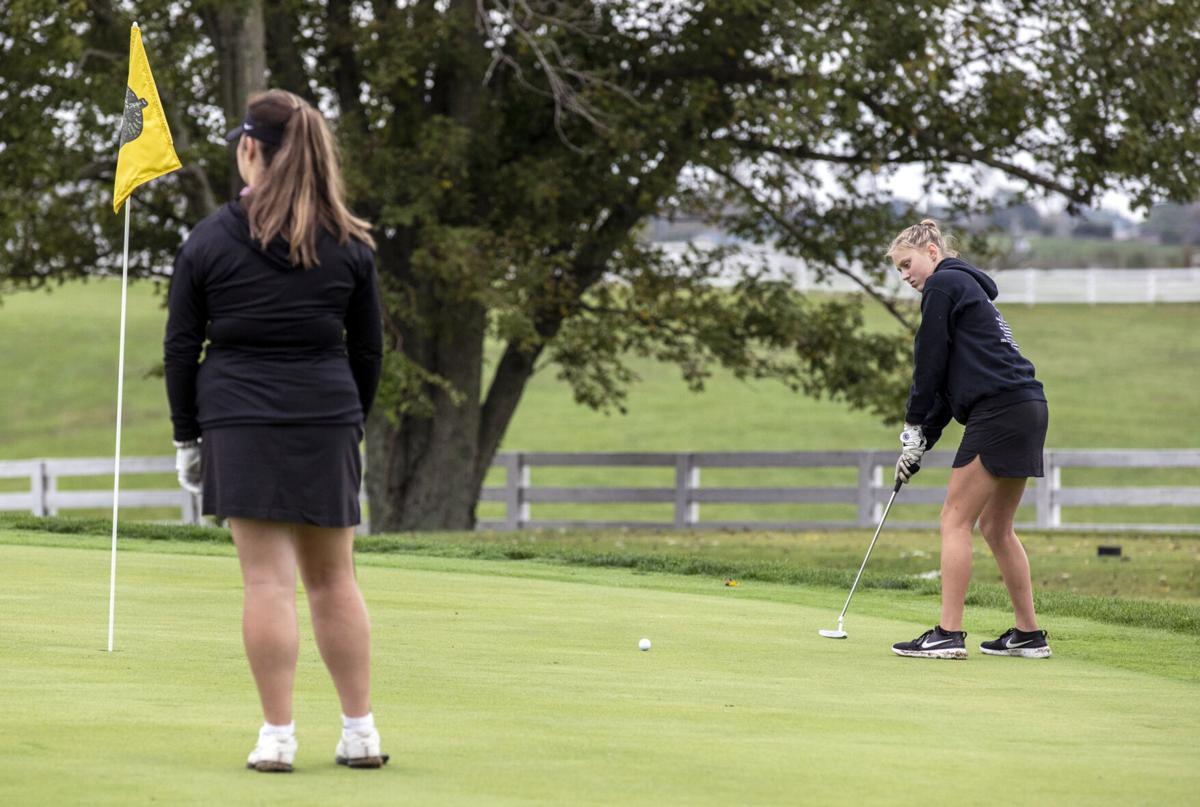 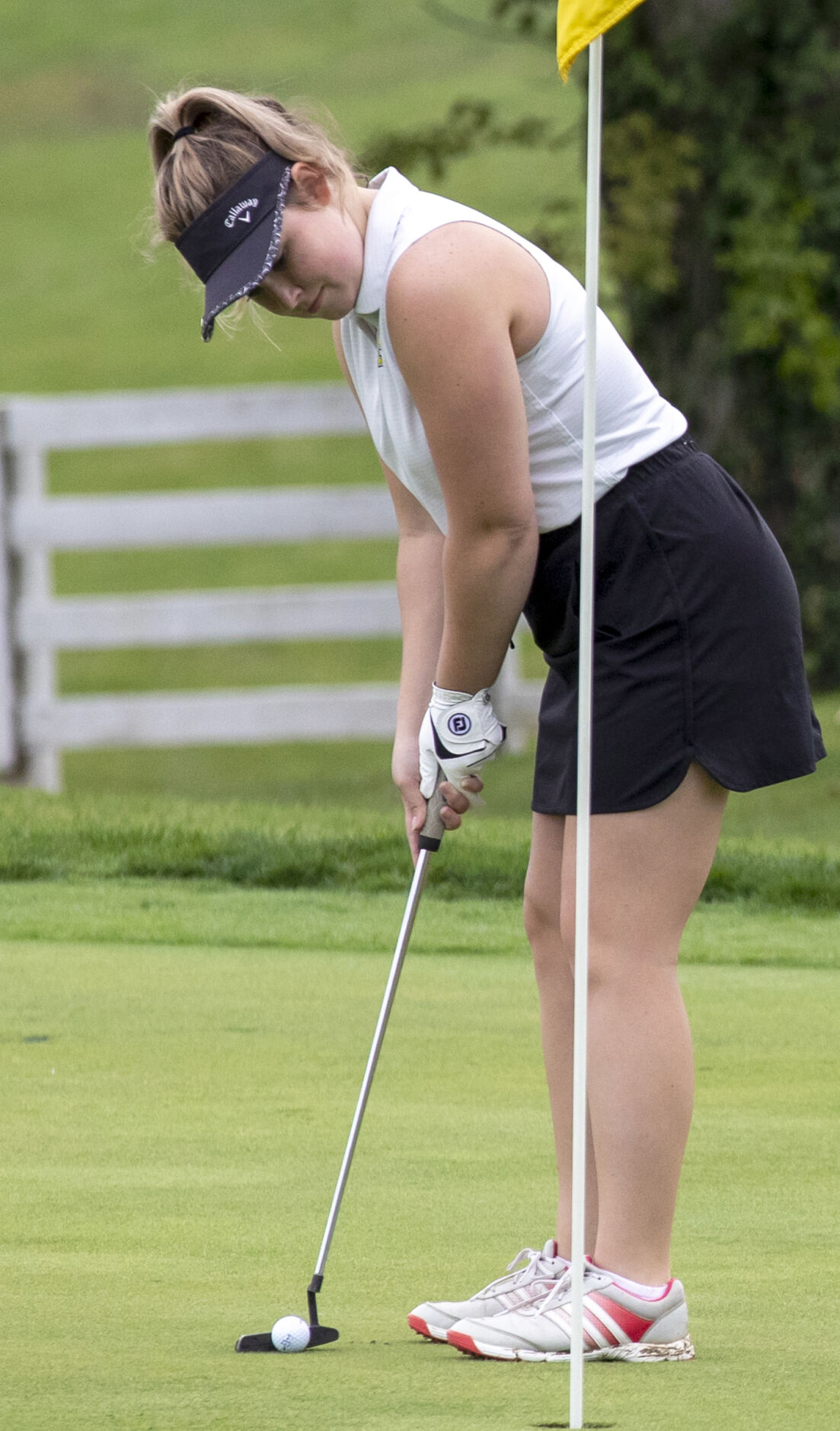 Montgomery County’s Madison Back hits a drive during the girls region golf tournament at Acorns Golf Course in Mount Sterling on Tuesday.

East Carter’s Addison Lewis sets to tee off during the girls region golf tournament at Acorns Golf Course in Mount Sterling on Tuesday.

MOUNT STERLING Morgan Kennedy was cruising along in the Region 12 Tournament with just two holes or so separating her from the clubhouse when an overcast afternoon turned into a brief downpour.

And Kennedy’s toughest competition for medalist honors had already finished their rounds.

“I tried my best just to not get my head messed up during it,” the Boyd County eighth-grader said of the ill-timed inclement weather. “I was like, if anything happens, I’m gonna at least try to qualify.”

Kennedy did better than that: she held steady with pars on her final two holes — Nos. 8 and 9, since she’d started on No. 10 — to card a 6-over-par 77 and a one-shot victory at Golf at Acorns on Tuesday.

“I’m at a loss for words right now,” Kennedy said with a wide grin. “It’s exciting, amazing, anything above that.”

The team competition featured far less drama. Ashland shot a 360 — slicing 22 strokes off its tournament average — to outdistance host Montgomery County by 45 shots. That’s the widest margin between the region champion and runner-up since 2011.

“The kids have all come together,” Ashland coach Mark Hanni said. “We’ve played 5700-yard courses all year. ... We’ve been paired with Marshall County and Madison Central and Sacred Heart all year, and our kids have been taking a beating. They’re getting out-driven 50, 75 yards, and today I told them, ‘Today is your day. Today is the day all that beating we took this year is gonna make sense.’”

Ashland did it even with its Miss Golf candidate at well less than full strength. Kate Hanni has battled tendinitis and nerve trouble in her hand this season, which she exacerbated on an iron shot Tuesday, her father and coach said.

Hanni’s right hand shook so badly, it went beyond uncharacteristic misses on some short putts.

“The back nine, I had to record her scores for her because she could not write them down,” Mark Hanni said. “It quickly changed at that point, and I just went to the other kids and told them, ‘Hey, I need you to finish strong. We need to pick her up today. She’s packed us for three years, we gotta pick her up,’ and boy, they did.”

Seniors Cullop and Hanni each qualified for their fifth consecutive state tournament, which begins Thursday in Bowling Green. Tori Brown carded a 102 and Laney Sorrell shot a 100 to join them. For Cullop, Brown and Sorrell, it was their best round of the season.

It isn’t yet known if Hanni will be able to play, but Ashland plans to enjoy the experience regardless.

“I think it’s just gravy. ... Whatever we shoot, we shoot. We’ve got this,” Mark Hanni said, chuckling and grasping the region champion’s trophy still in its protective plastic.

“Last year I was really nervous,” she said, “and this year, I stepped up there not really having any nerves at all, knowing I could do good today.”

So were the Lady Musketeers, who went from not knowing if they’d have enough players for a team in the preseason to finishing third in the region tournament.

“When we started out, we were just like, we’re just having fun; we all like each other,” Greenup County coach Kacey Carver said. “And to actually be in contention to start winning some tournaments and start thinking we have a legit shot is a pretty crazy turn of events.

“They improved really quick. We’re talking, a few of our girls started in August. Wild.”

Leibee, on the other end of the spectrum from Burke, will play in Bowling Green for the fourth consecutive year.

“My short game carried ther weight of my game today. Up-and-downs and then one-putts, they saved me today,” she said. “I’ll get to help out the girls that are new to (State). That’s what I most look forward to, just showing them the ropes.”