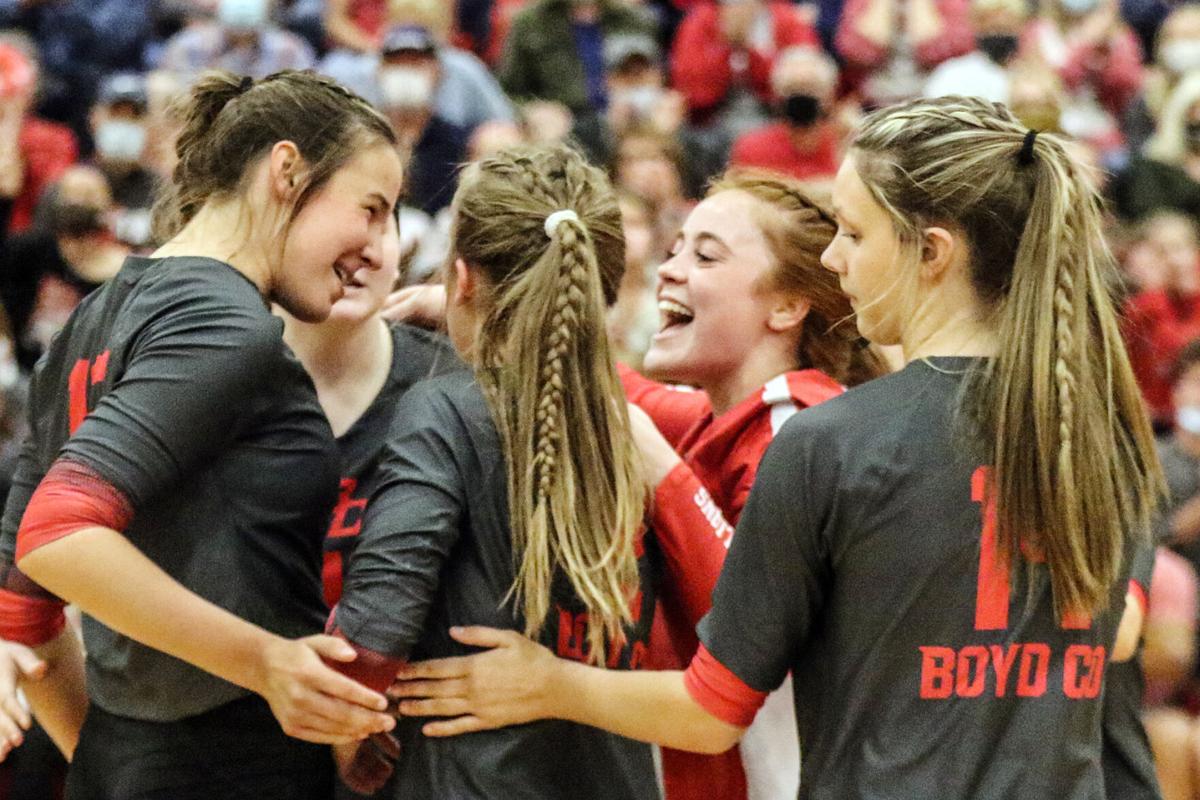 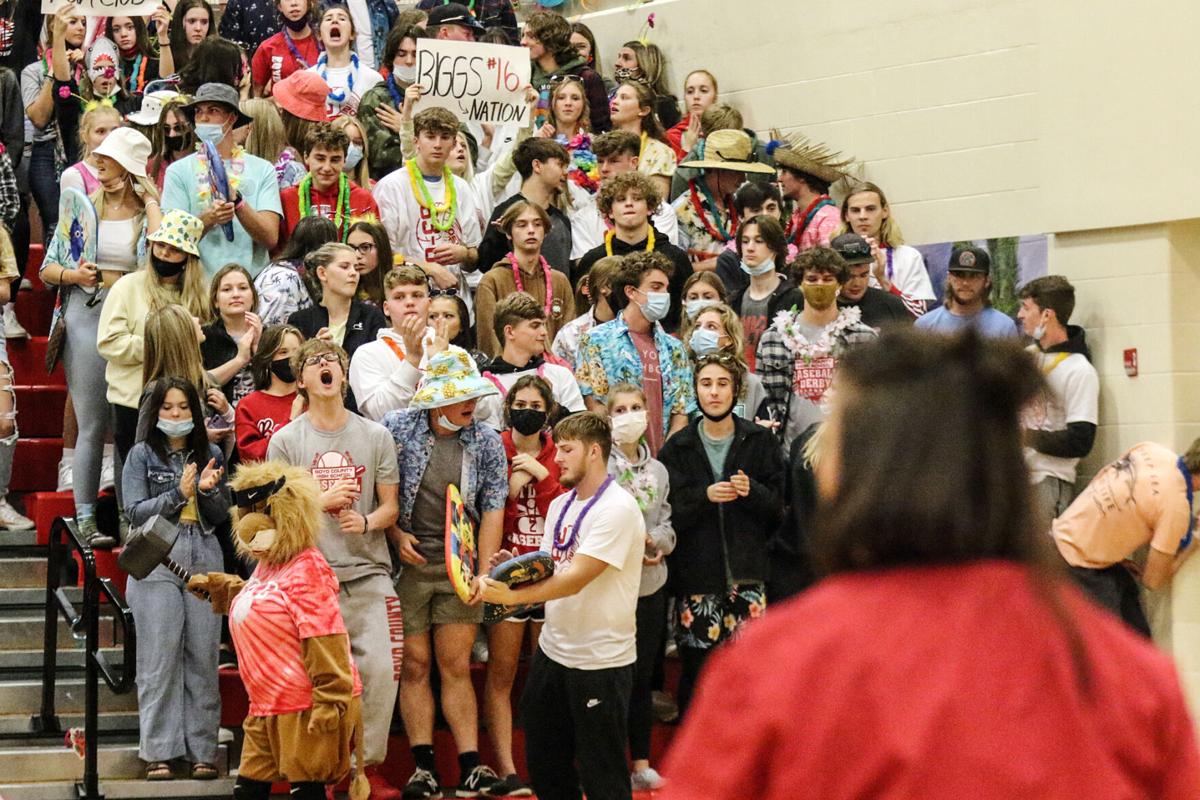 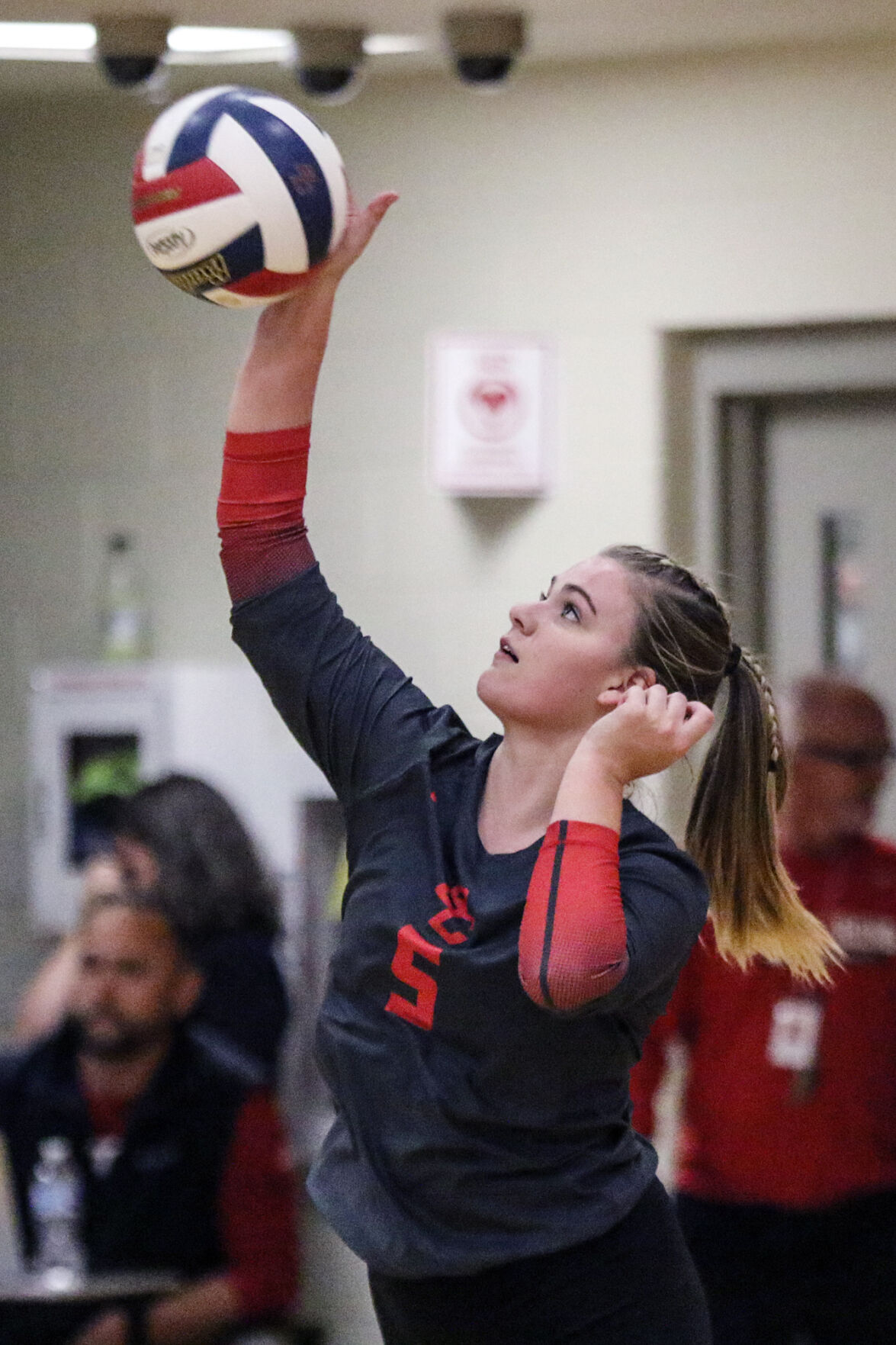 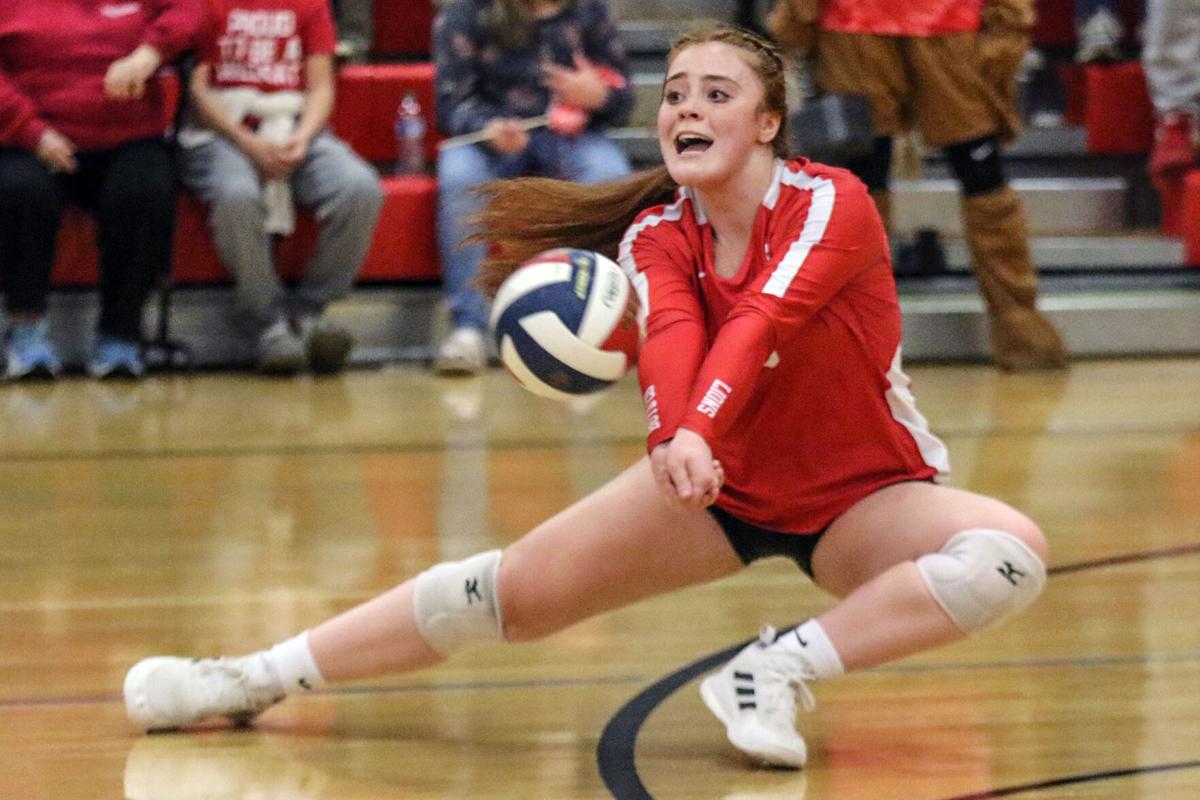 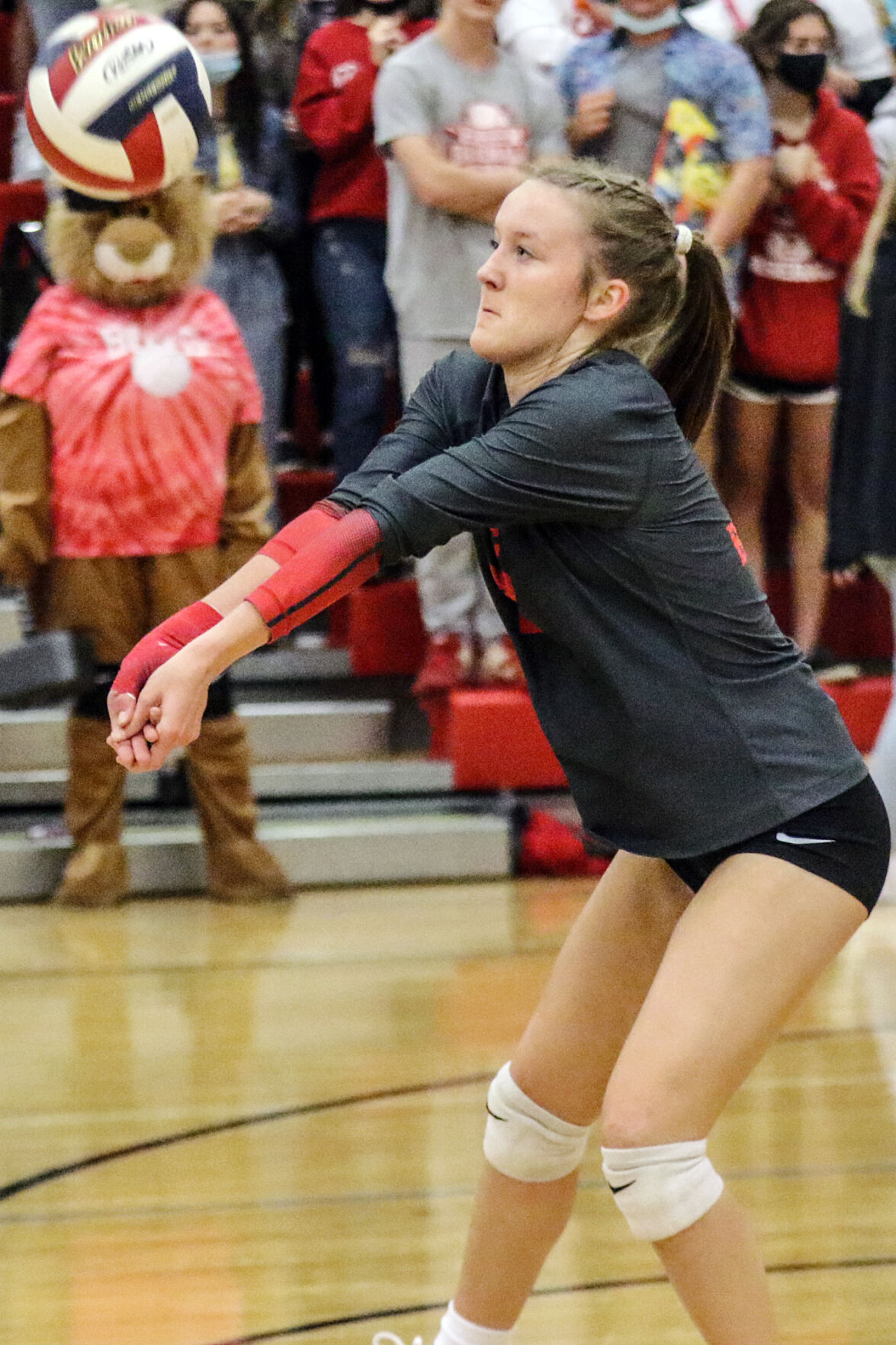 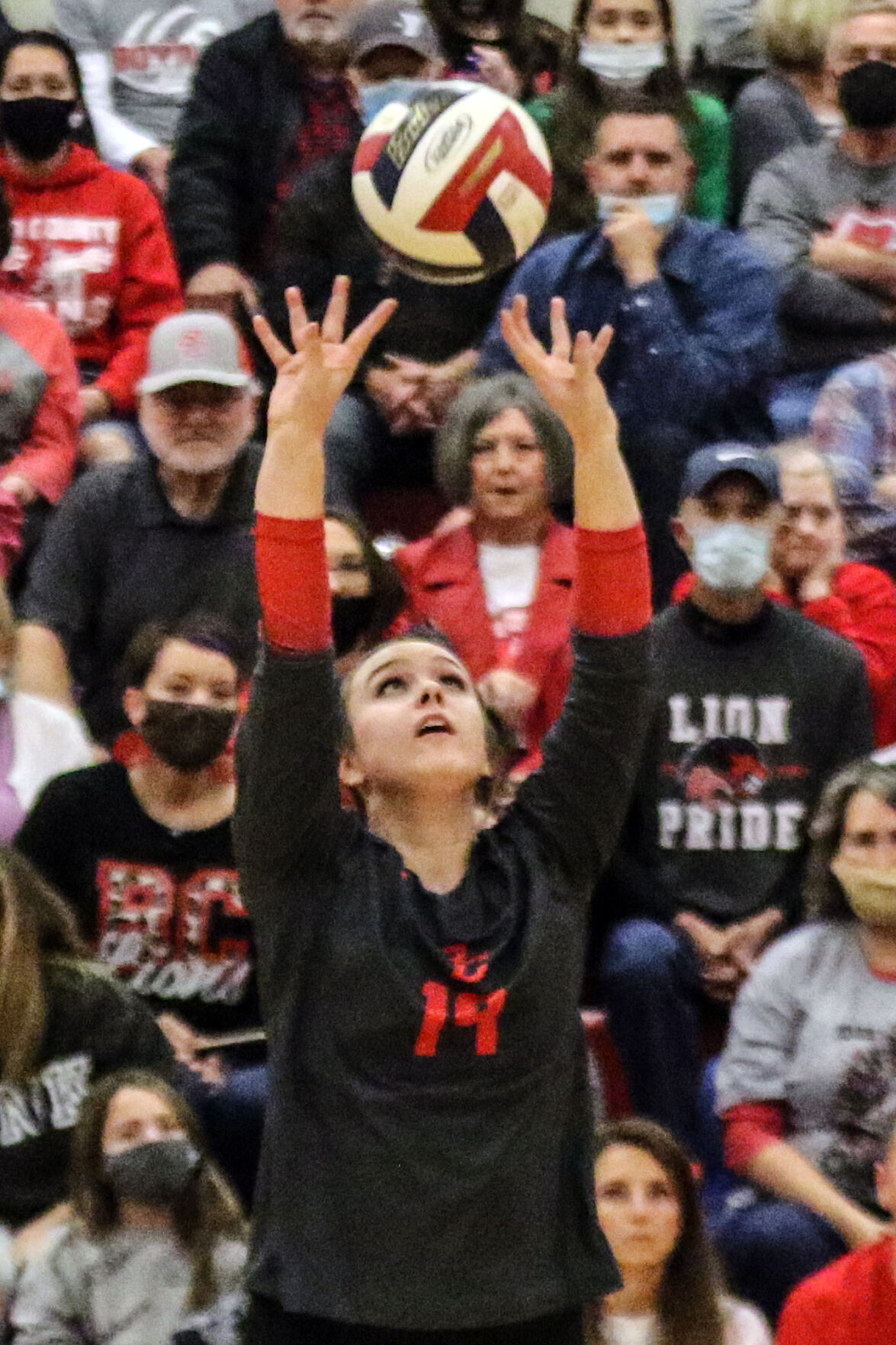 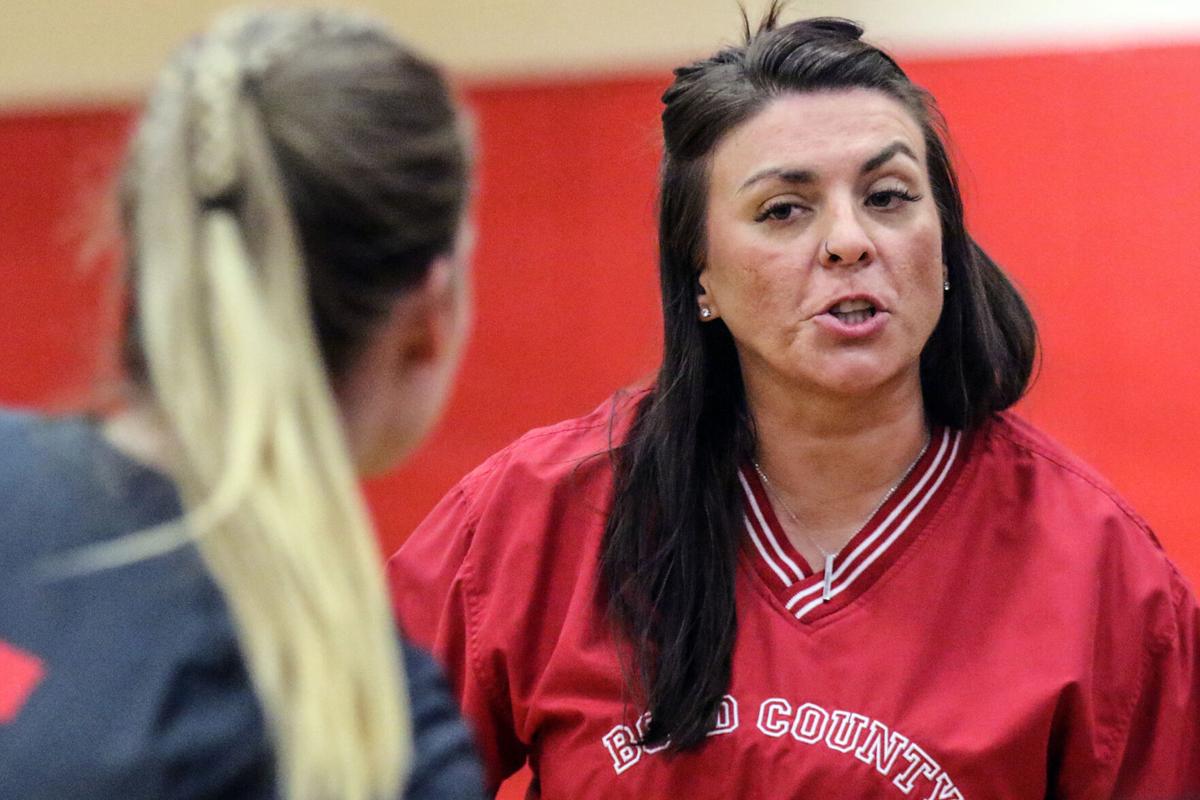 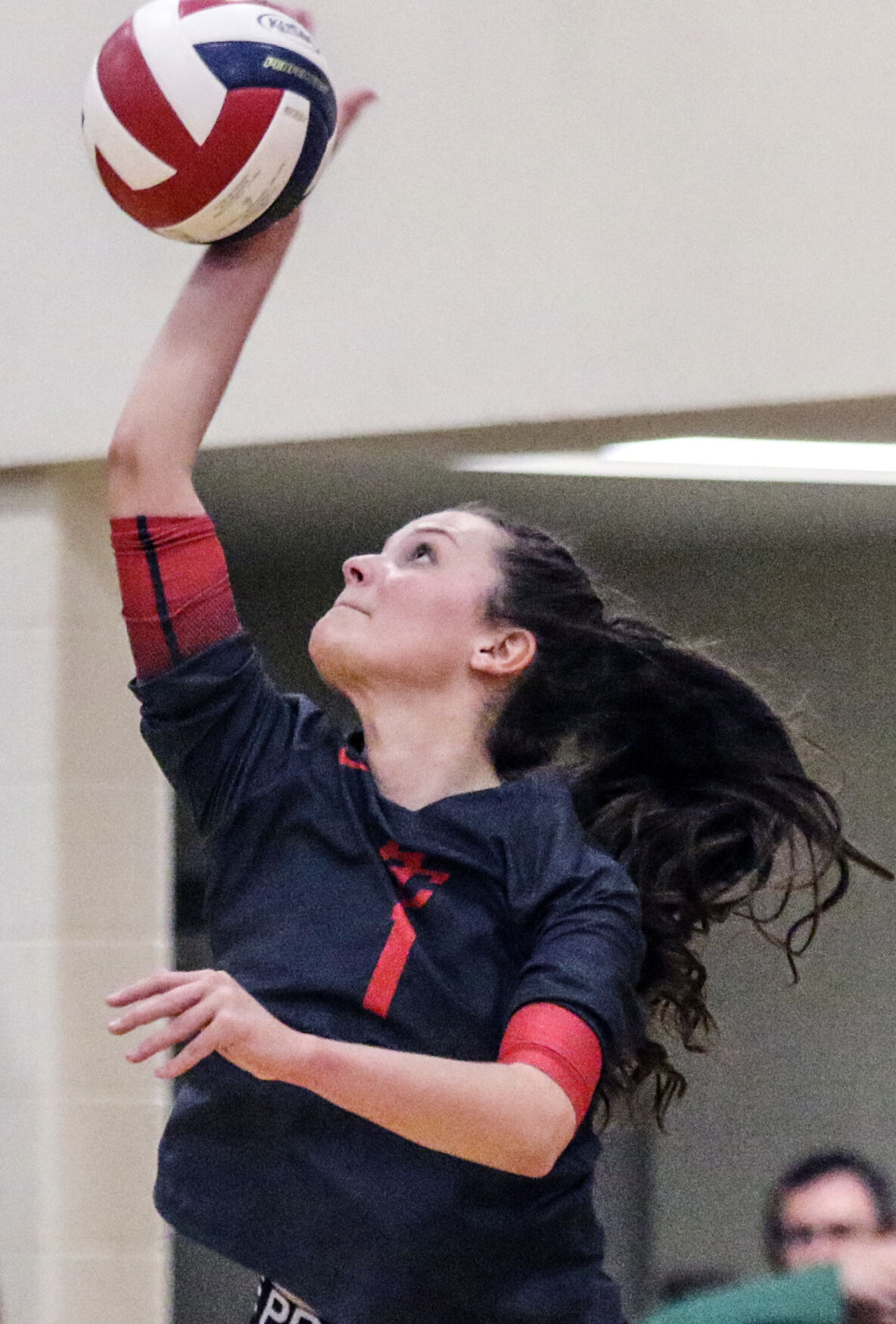 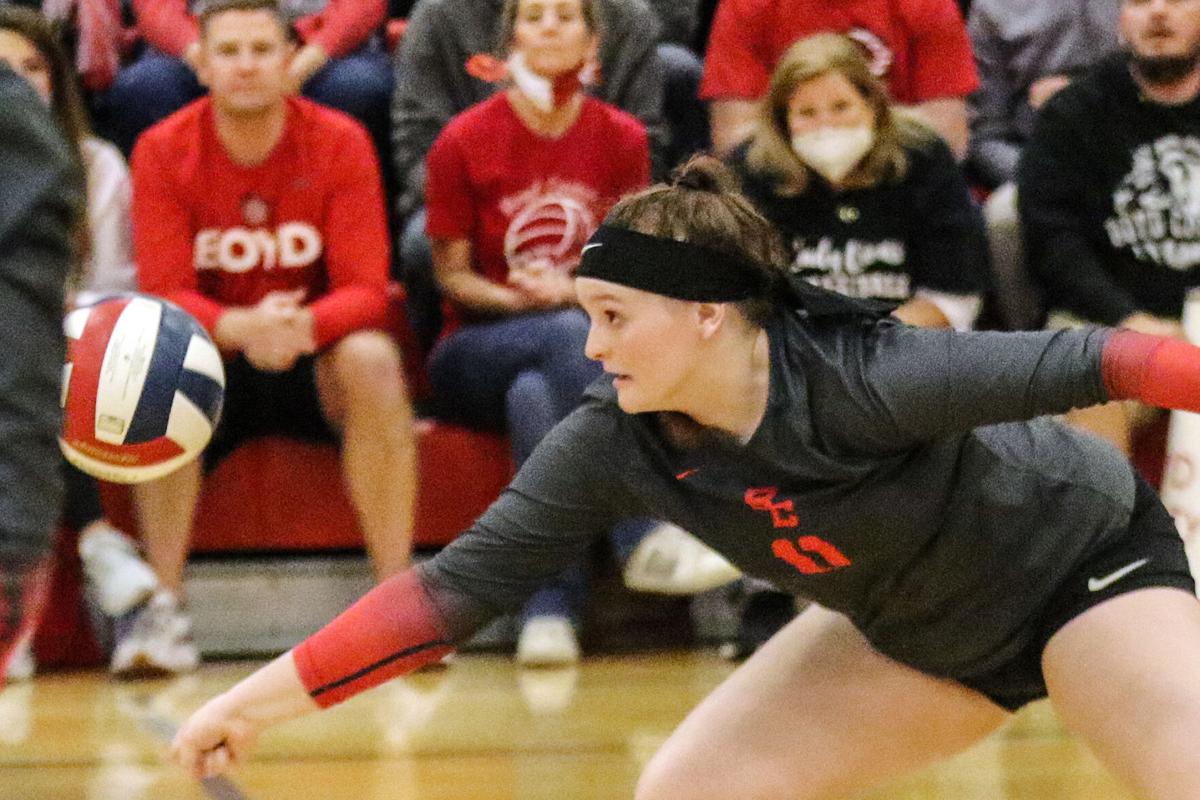 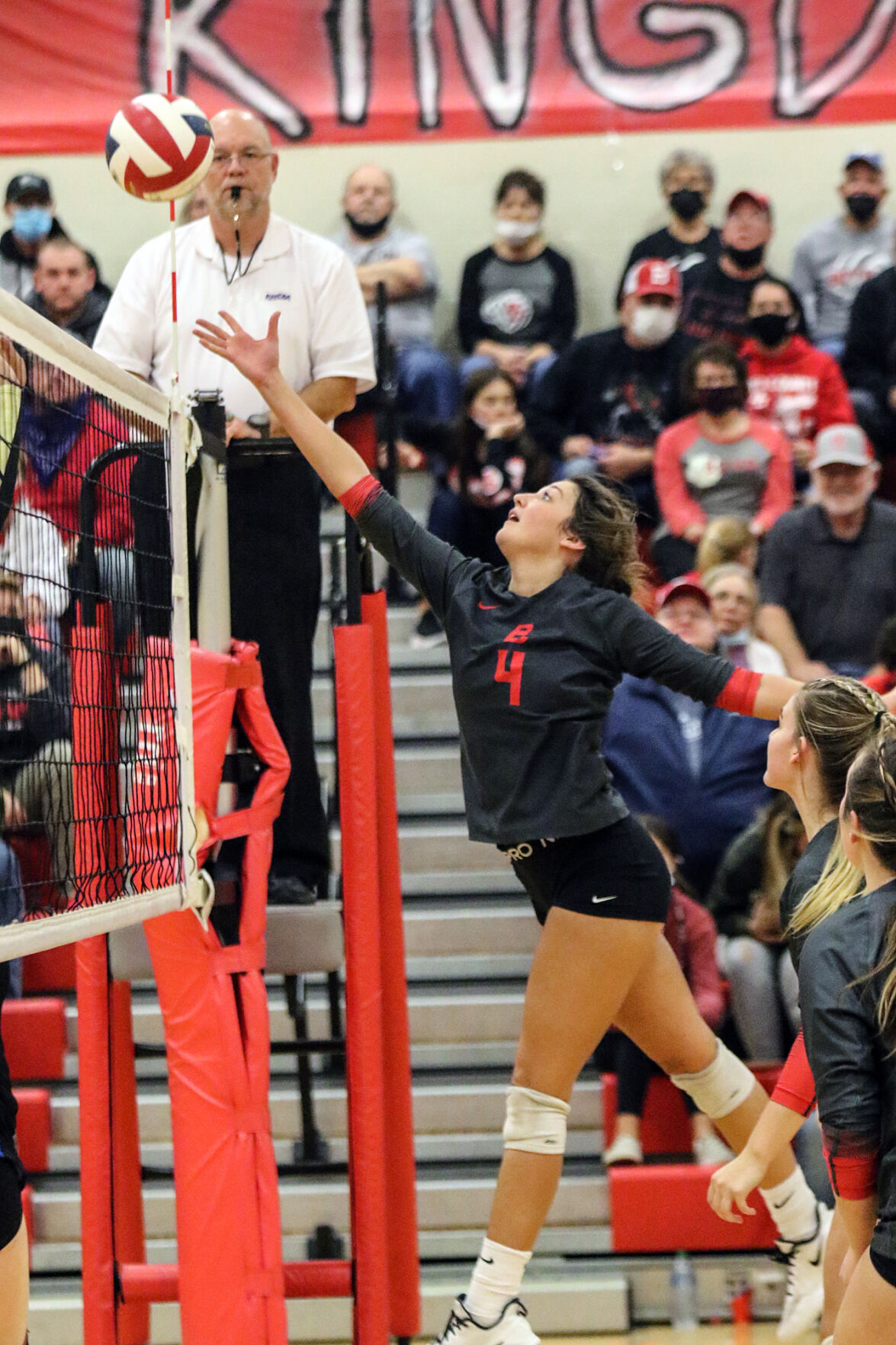 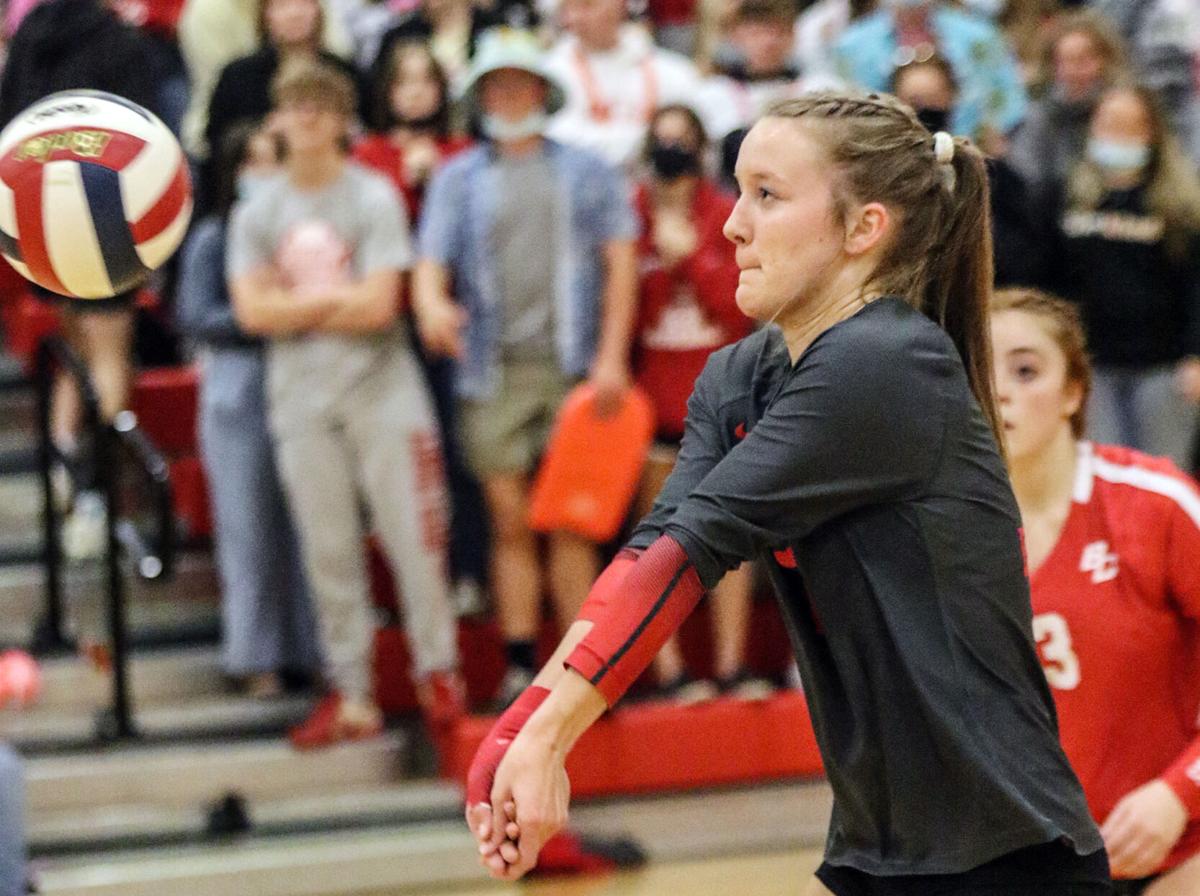 Fans packed the friendly confines. Cheerleaders from both teams were present showing their support and the band from Floyd Central livened up the electric atmosphere.

The Lions advance to the state quarterfinals to face Mercy at George Rogers Clark on Friday at 7 p.m.

“We came in with a lot of hype,” Boyd County sophomore Audrey Biggs said. “The atmosphere is great. I loved how many people were here supporting us. Volleyball is a growing sport in our area. Our fans were backing us up the whole game.”

Biggs used her length to disrupt the Floyd Central offense at the net. She played a significant role in the Lions’ final two points to clinch the match.

With the scored knotted at 24-24 in Set 3, a Jaguars shot glanced off the fingertips of Biggs. It was enough to redirect the ball over to Morgan Lewis, who reacted quickly to send it back to Floyd Central territory.

The ball had plenty of spin. It hit the floor in-bounds and took a sideways bounce off the court.

Biggs left no doubt on the subsequent point. She emphatically returned the Jaguars’ offering for the winning tally. Biggs had four scoring blocks in unofficial statistics—half of the Lions' team total.

“When you can control the net against big hitters like Floyd Central, it is key,” Boyd County coach Katee Neltner said, “even if you can get a soft block off it. It helps your defense in the back row.”

Biggs is no stranger to the big stage with her experience on the Lions' basketball team. She felt her team was ready to conquer the challenge that awaited them.

“Leadership plays a big role,” Biggs said. “You have to carry your team if they get down. When (the other team) makes a run, we just had to come together and play our game."

Added Neltner: “She just excels in any arena. She loves the pressure. She loves the loud and obnoxious. She gets hyped up with fans. I don’t think there is anything that can throw her off her game.”

Both coaches could see their club felt the magnitude of the moment in the opening set before they quickly found their footing.

“You could tell we were a little shaky from the get-go,” Neltner said. “Nerves got the best of us. Our passing wasn’t top-notch. We settled in and started running the offense like we normally do. We got those passes up. It was the first State appearance for these girls, and I was proud of the way they showed up and played.”

It was understandable. Both rosters featured few players that have competed in a match this late in the season. The Floyd Central program is only in its fifth year of existence. The Jaguars have one state appearance on their resume and recorded their second 15th Region Tournament title with a win over Paintsville last week.

It’s also the first time the team felt the gravity of a state tournament match on the opponent’s home court.

“I think we came out with a lot of nerves,” Floyd Central coach Brittany Reels said. “A lot of these girls have never been to State in their life or experienced something this big. They wanted it so bad that we came out tight. Our game is having fun and playing loose. We found that in the third set, but we fell a little short.”

Floyd Central (24-7) held a two-point advantage on eight separate occasions in the third frame. It was the largest lead for either team in a set that also featured 15 ties.

Emma Bailey put down a kill to give the Jaguars a 9-7 lead. The score got even tighter before Allyson Stumbo lifted Floyd Central back to the same margin with a point at the net to make it 22-20.

Lewis had four kills in the frame. The senior’s final spike evened the set at 24-24 before the Lions claimed their final two-point lead in the stanza to secure the sweep.

Boyd County (34-1) heads to Winchester this weekend having given up just nine sets in 34 matches this season. Neltner admires the way her team handles adversity even when they don’t produce their best game.

“It’s hard in the moment to appreciate the good that we are doing,” Neltner said. “They were hard-fought sets. We let up in the second and third set, but we still won them.

“It took some grit and determination on the girls’ part. My team stands out in every way. Sometimes when they are a little off their game, you almost can’t fault them for it because they fire on all cylinders 99% of the time.”

“With all the options we have on the front row,” Biggs said, “we are unstoppable.”

Reels said the Floyd Central band plays at most home games and her fan base travels well. They were well-represented at Monday’s match.

“She played fantastic tonight,” Reels said of Hall. “She put the ball down when we needed her to do it. Her serving was great. We are proud of all our girls. They played their hearts out.”