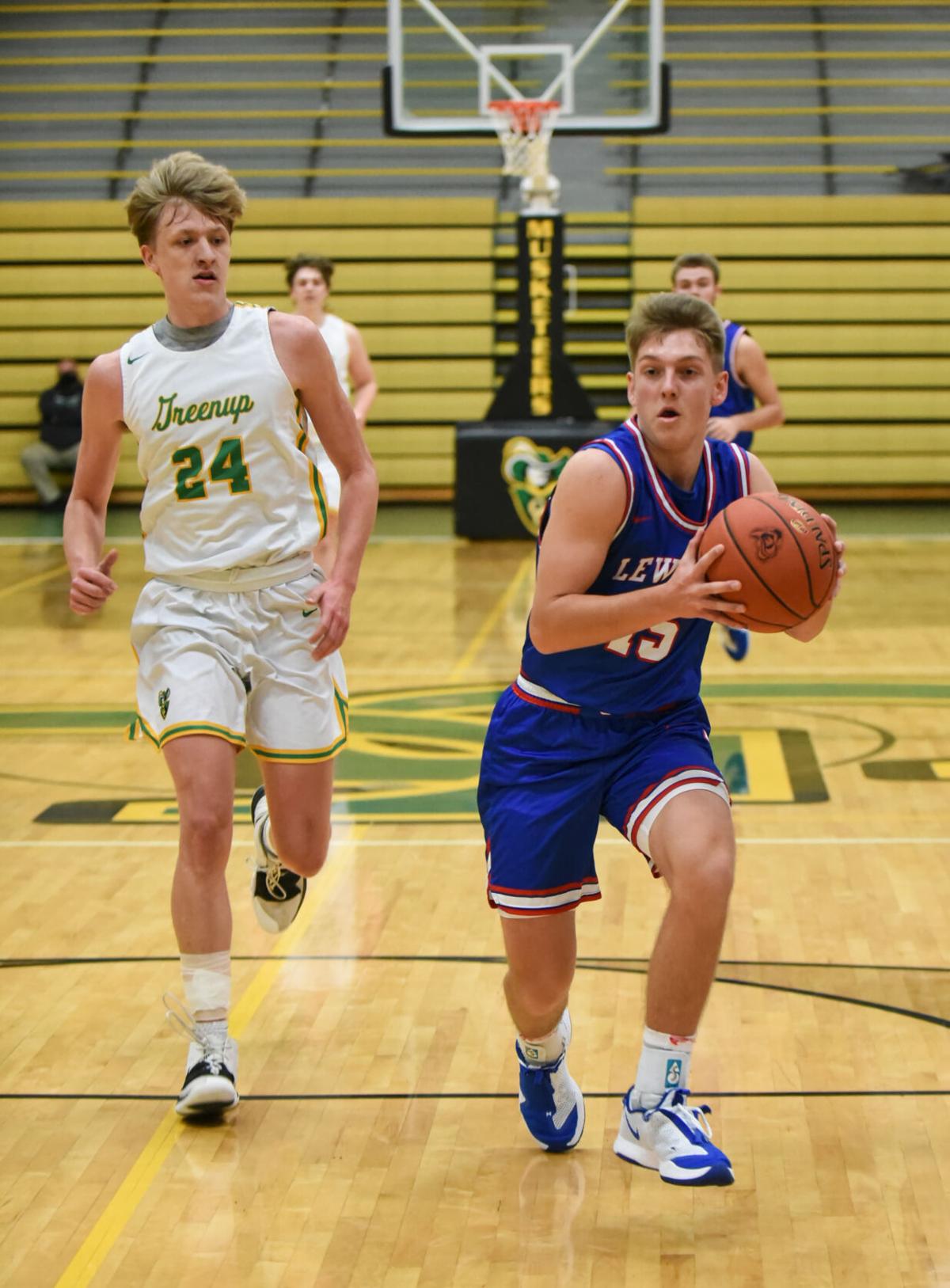 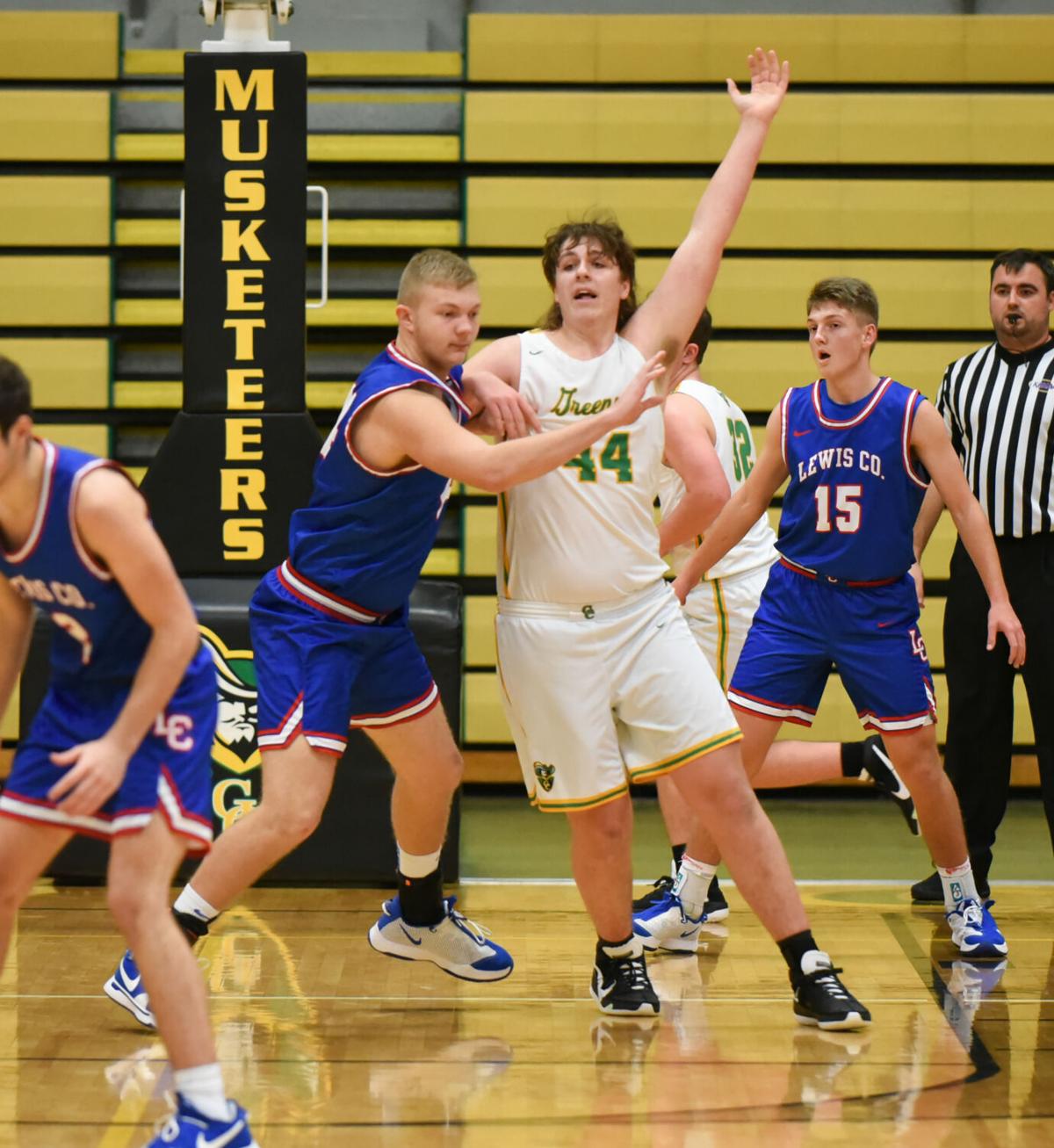 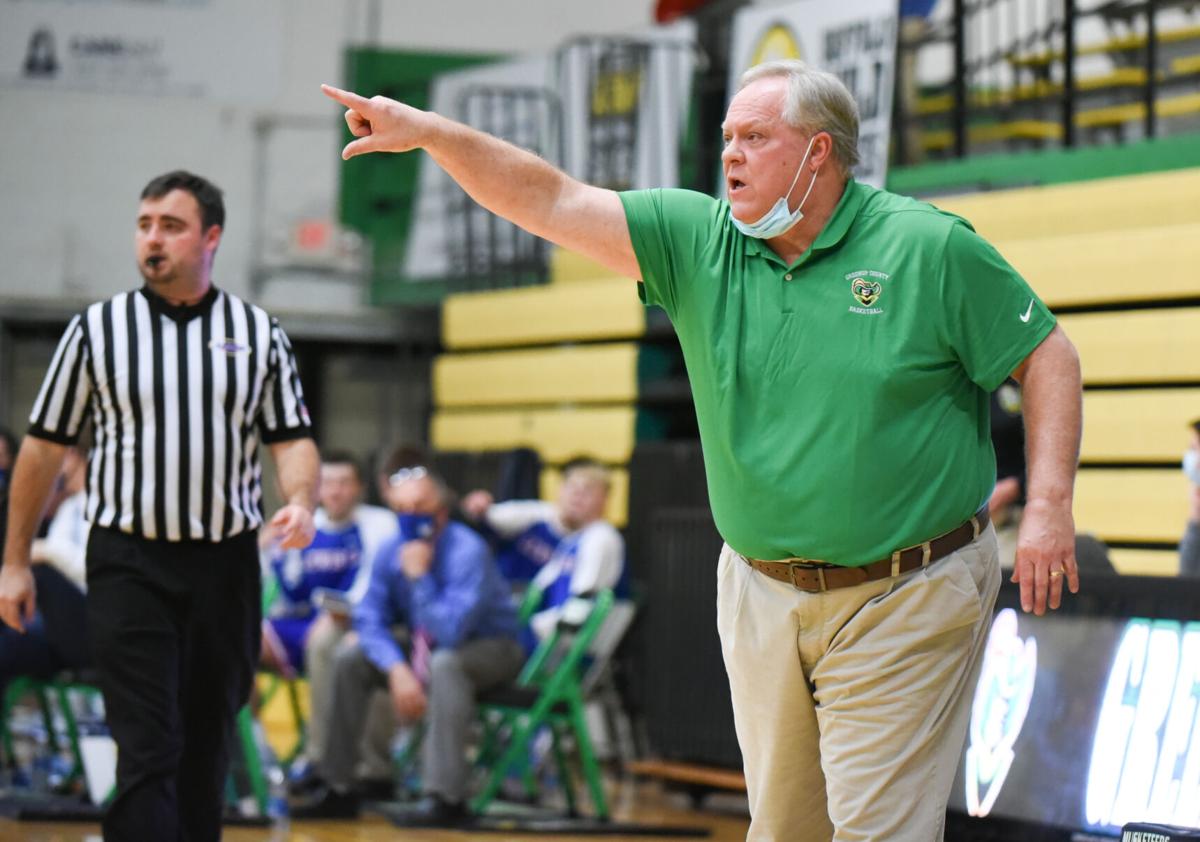 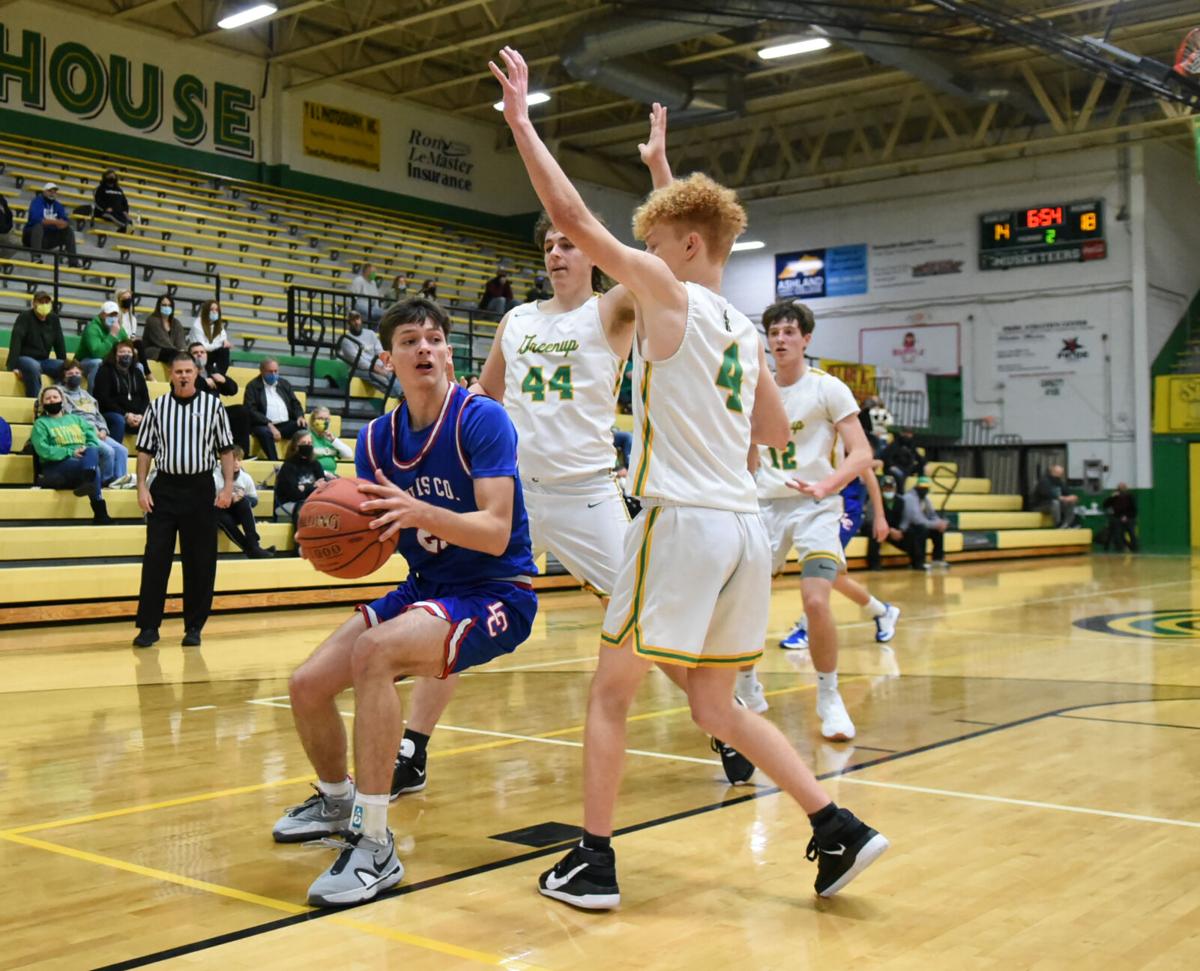 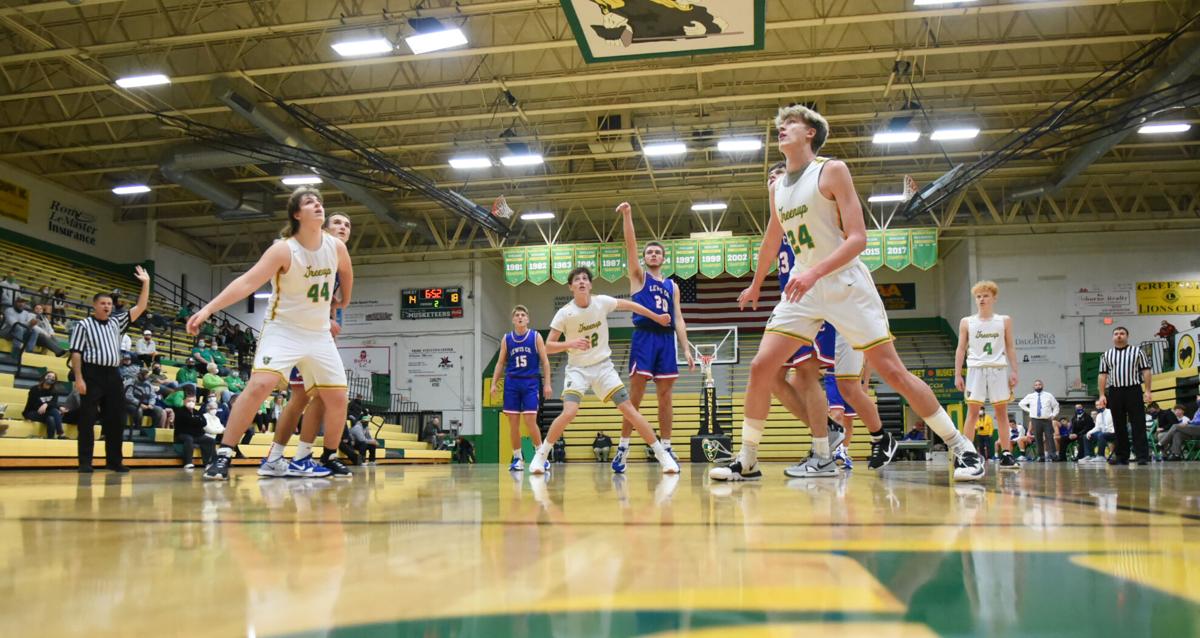 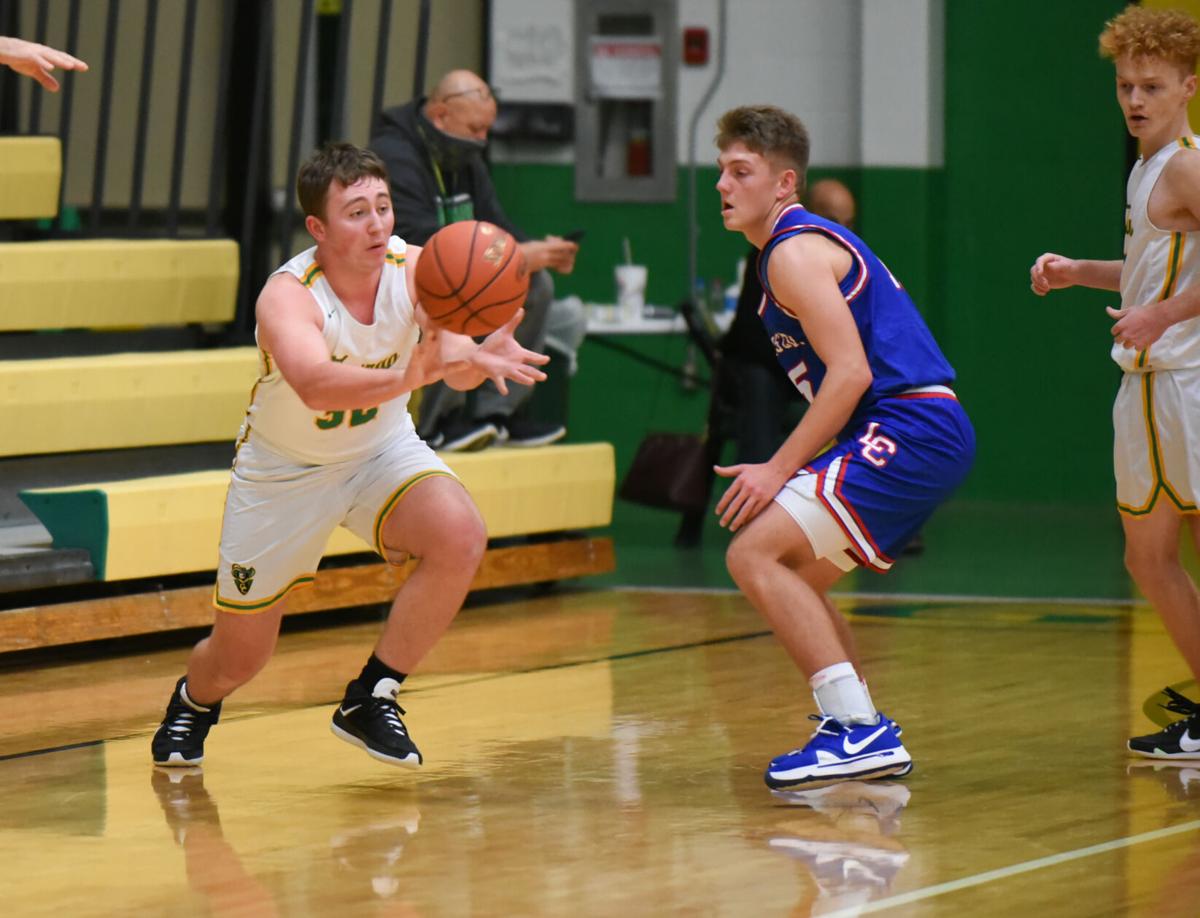 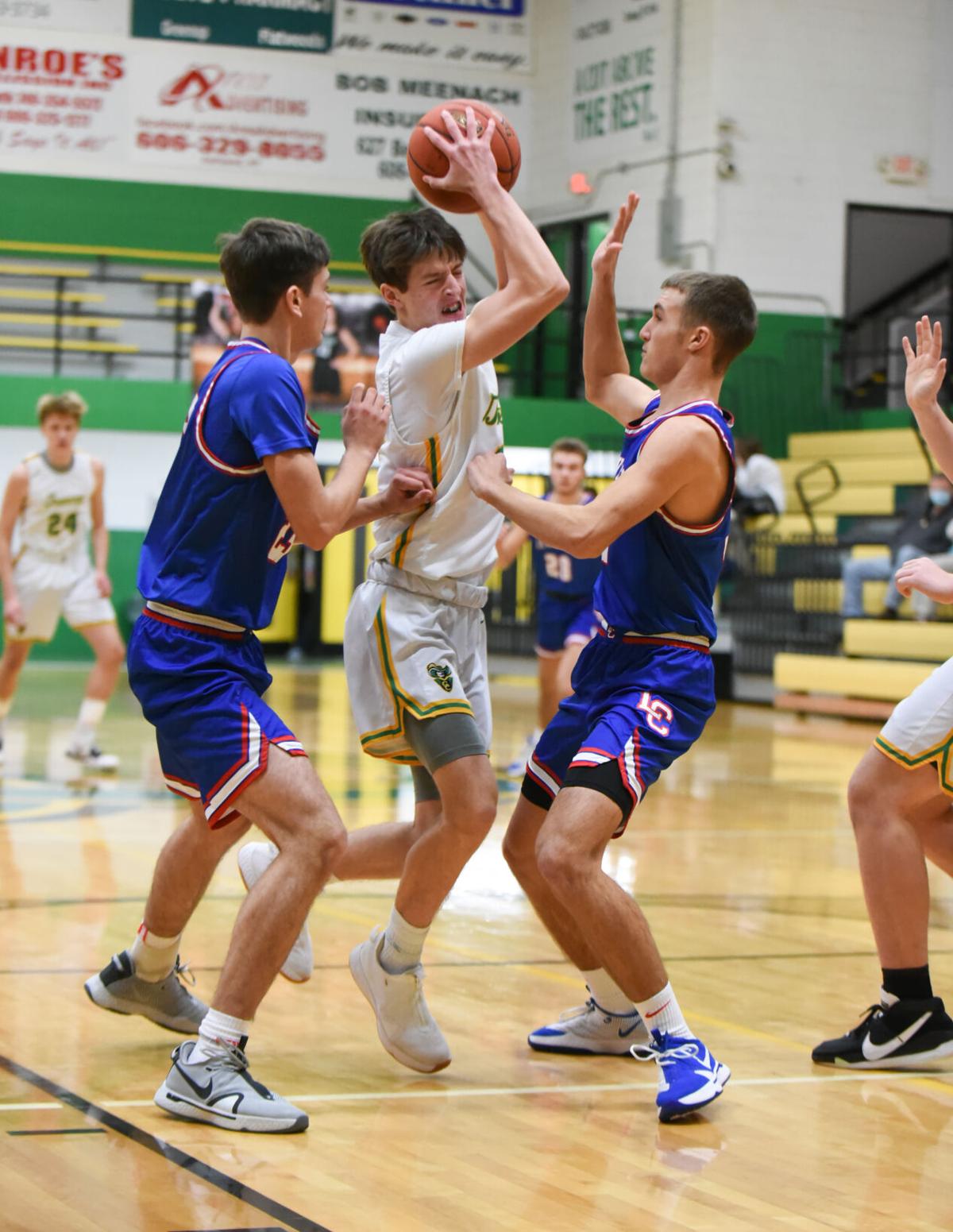 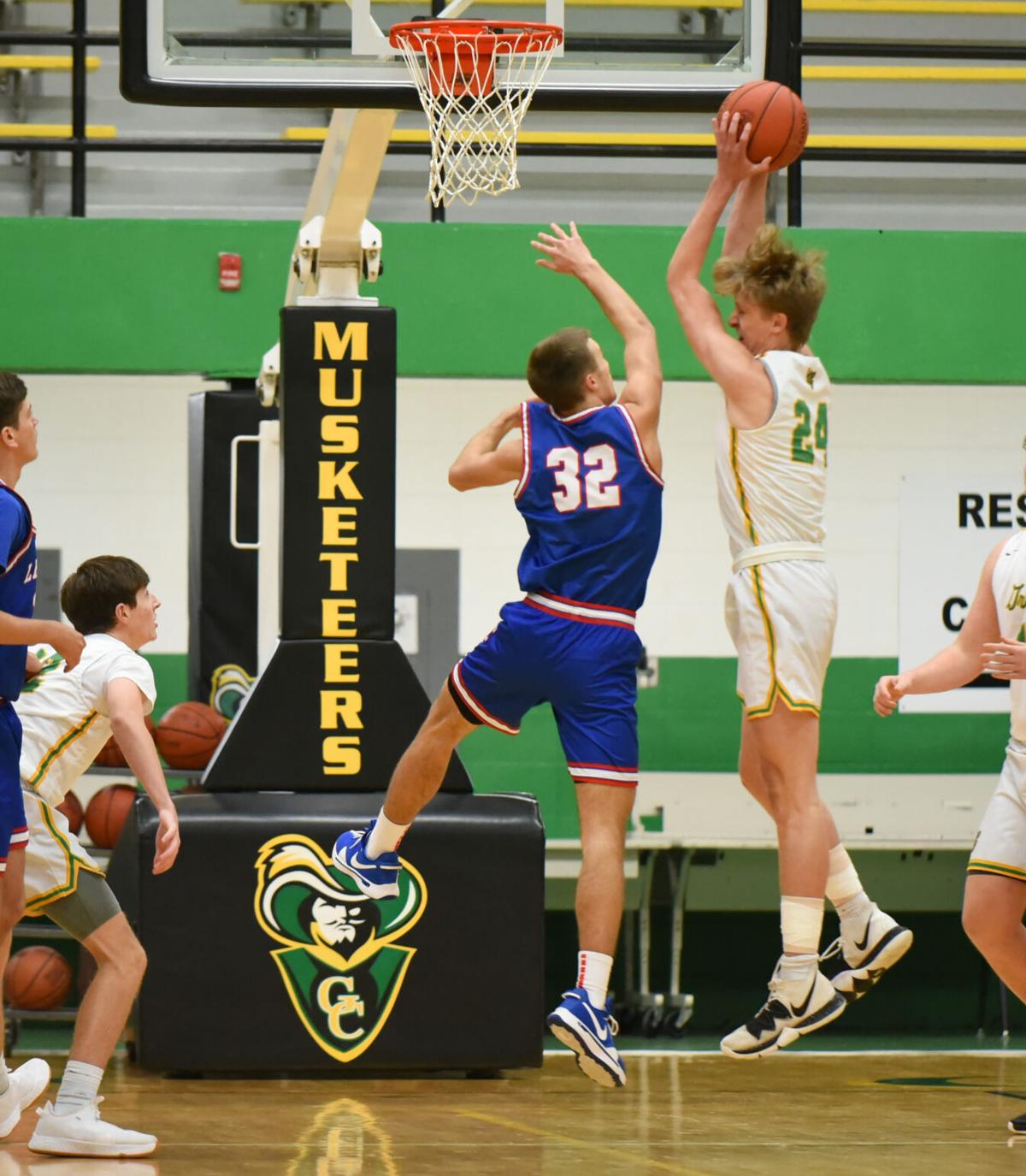 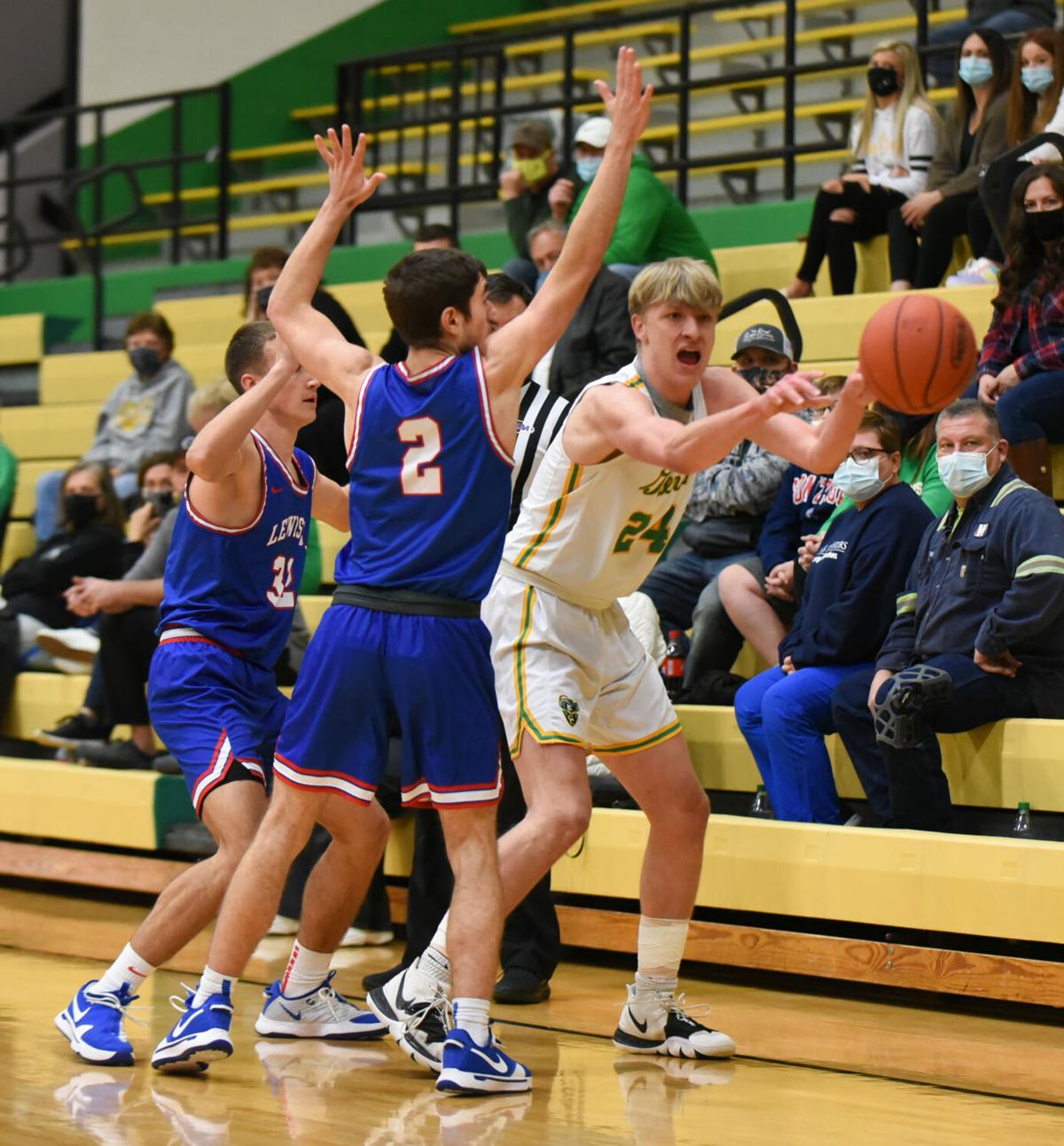 Greenup County's Nick Hewlett passes the ball as he is pressured by Lewis County's Bailey Thomas on Friday night. 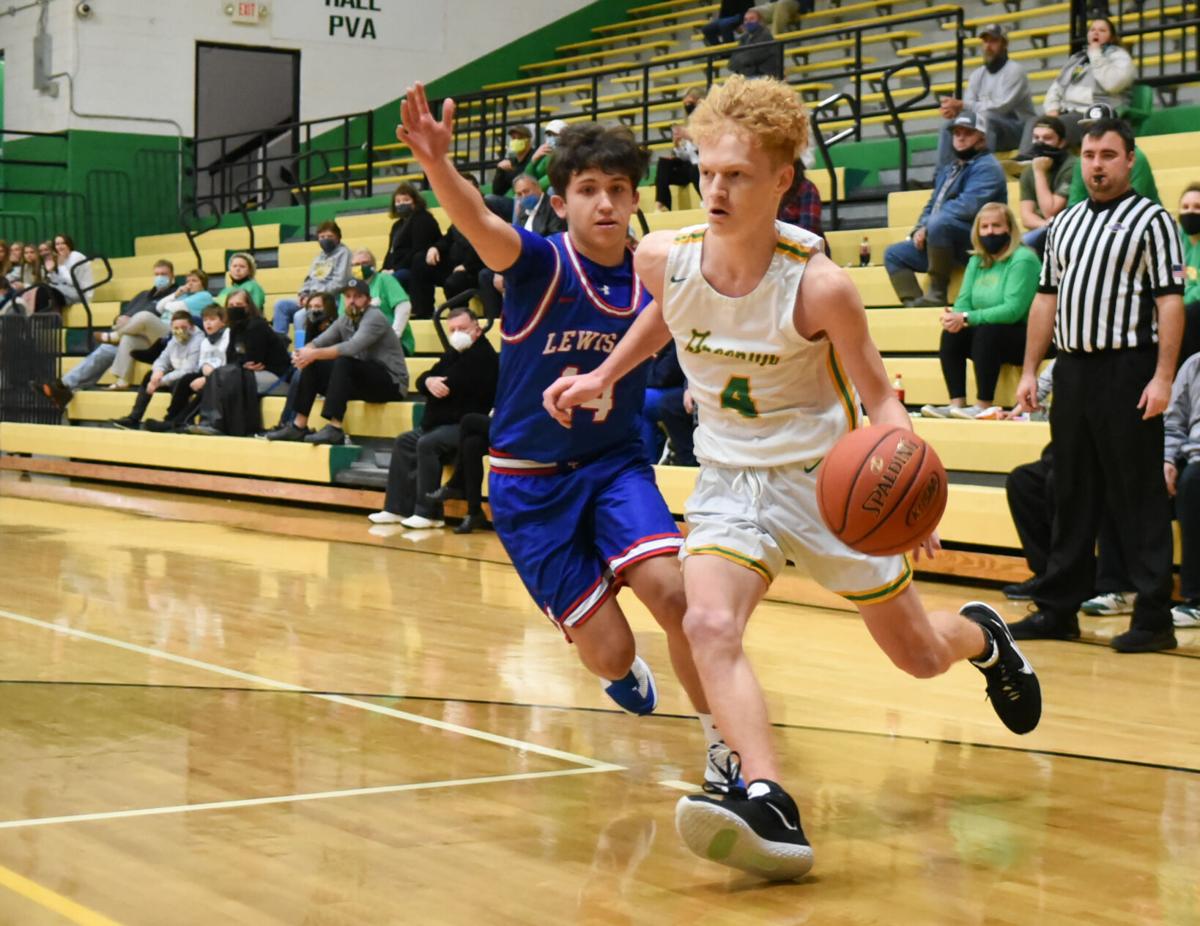 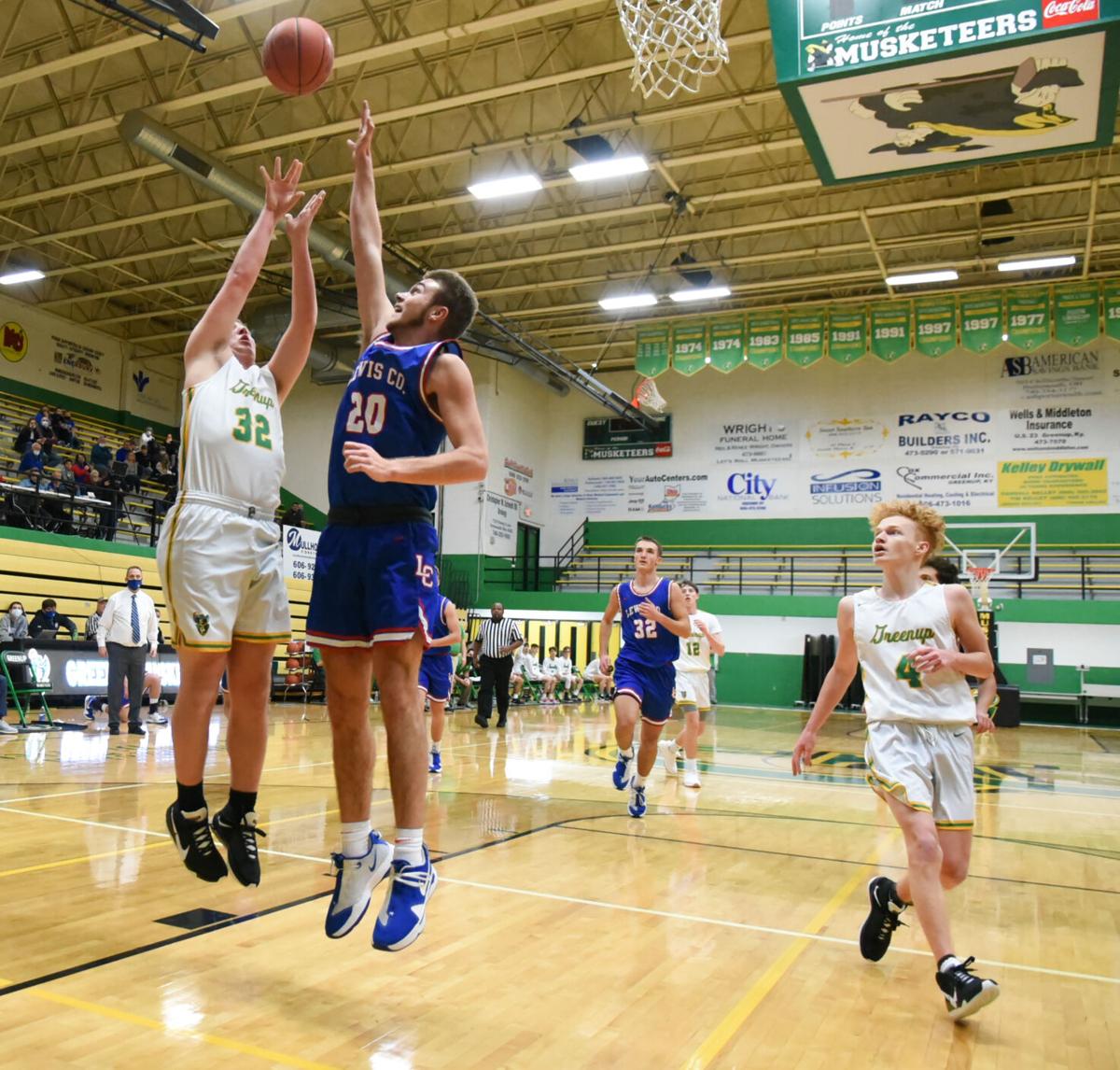 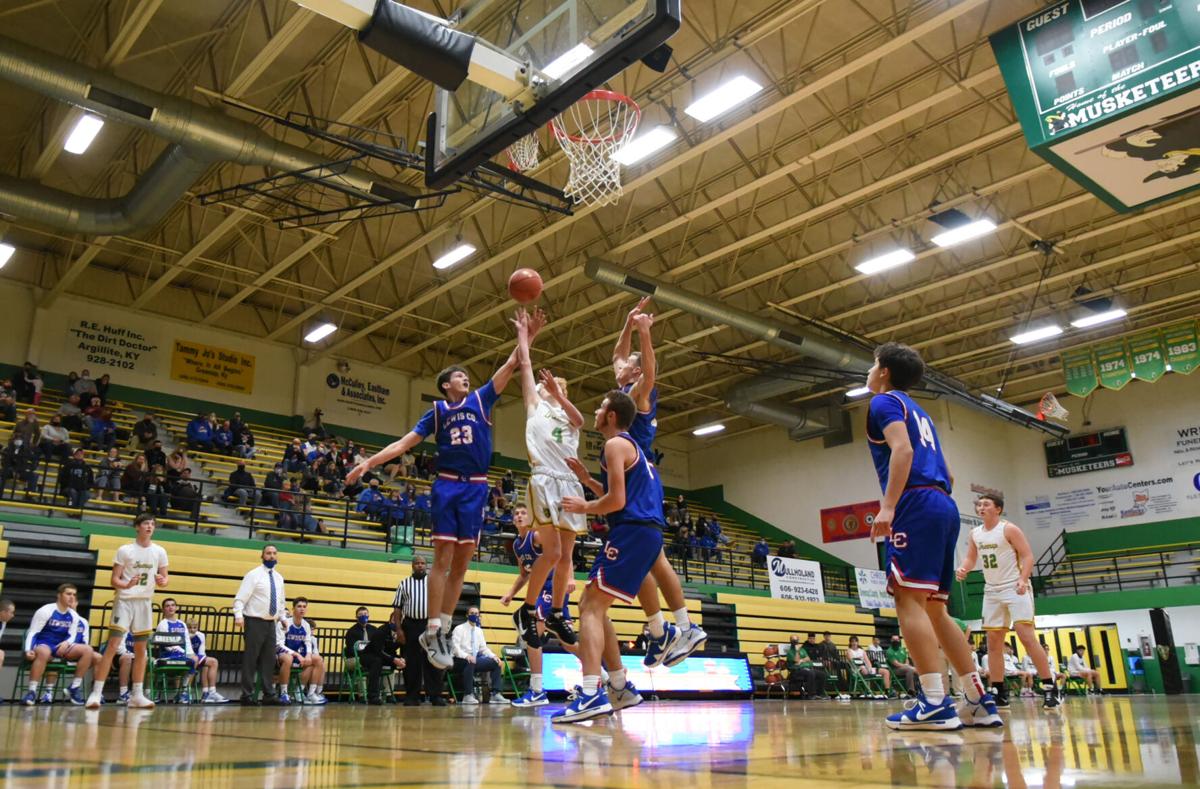 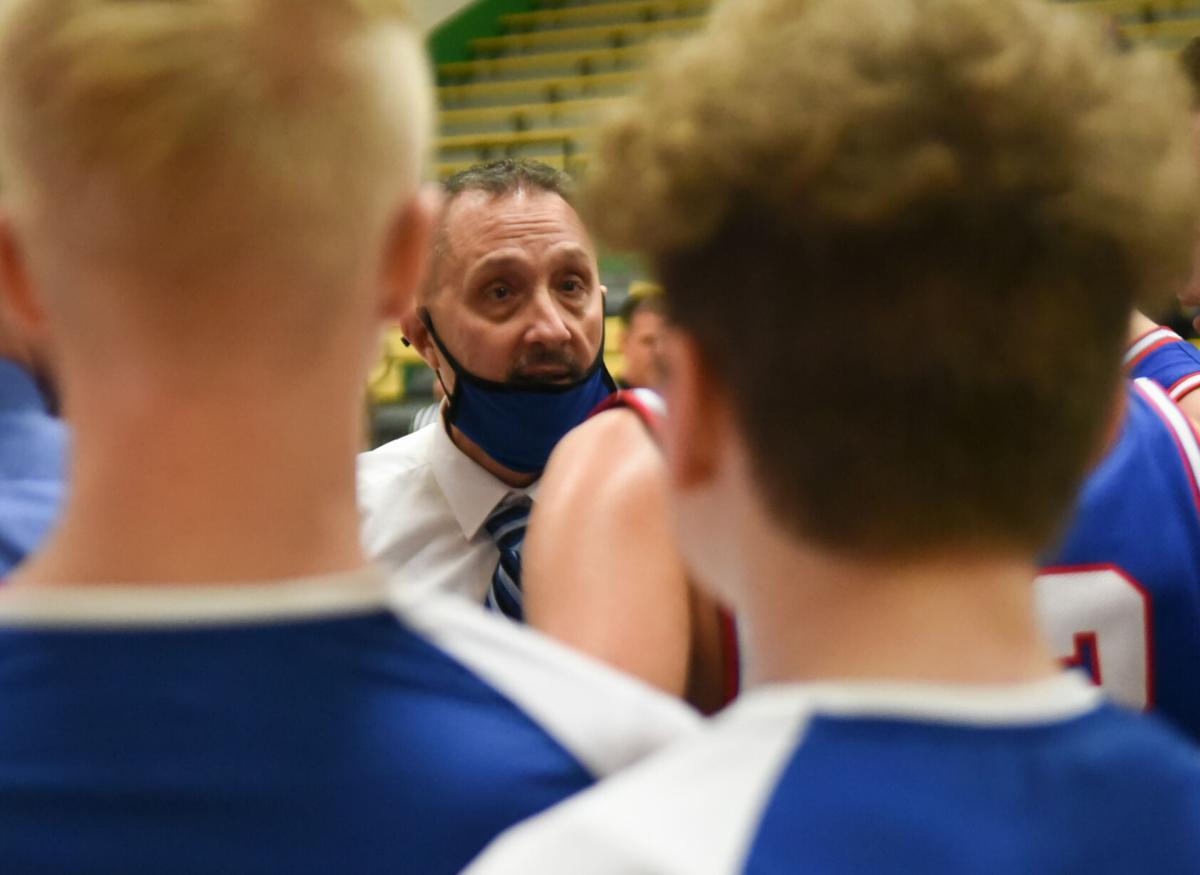 Lewis County coach Scott Tackett talks with his team on Friday during a timeout against Greenup County. 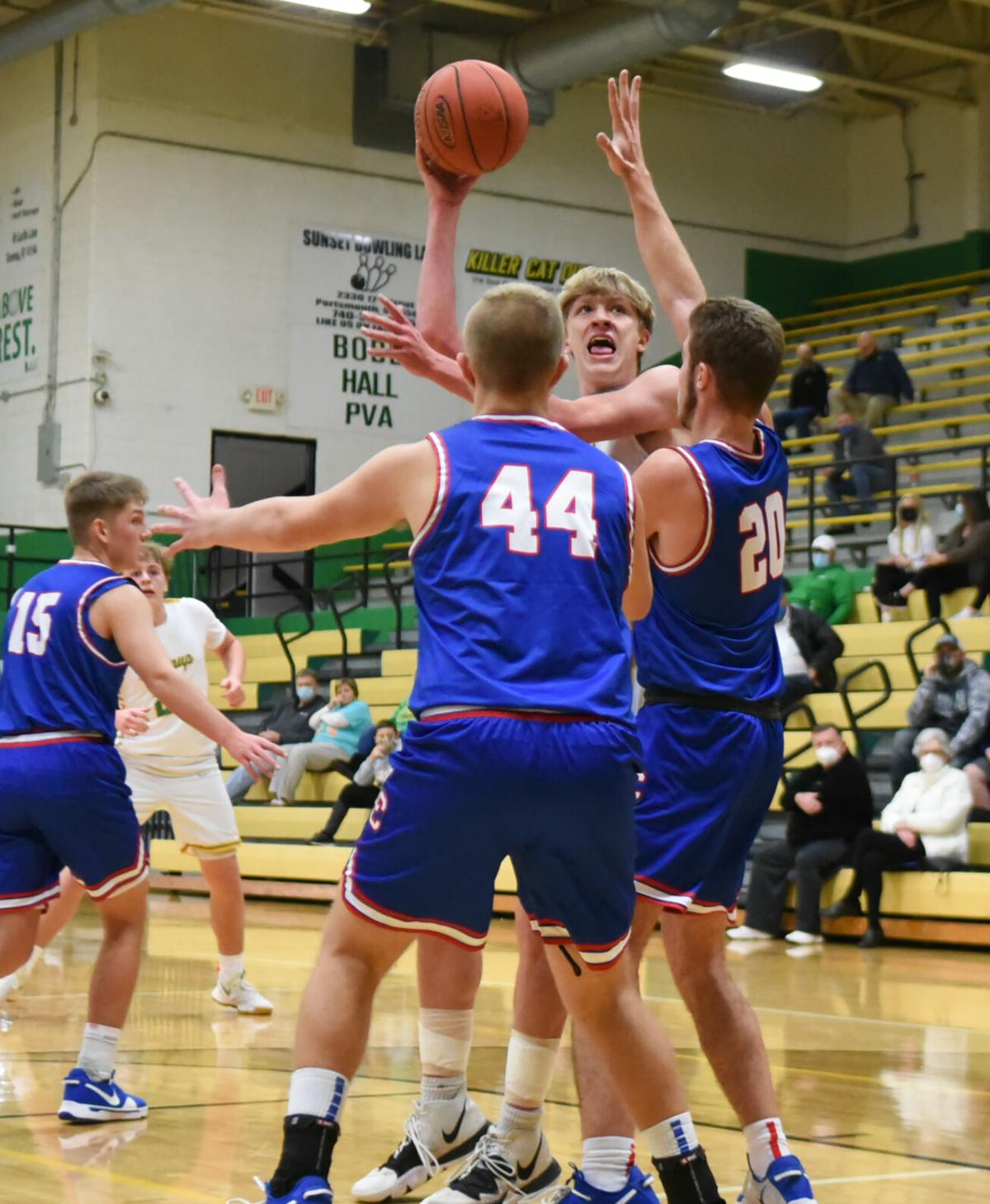 Greenup County's Nick Hewlett puts up a shot in the lane as Lewis County's Drew Noble and Kolby McCann defend on Friday. 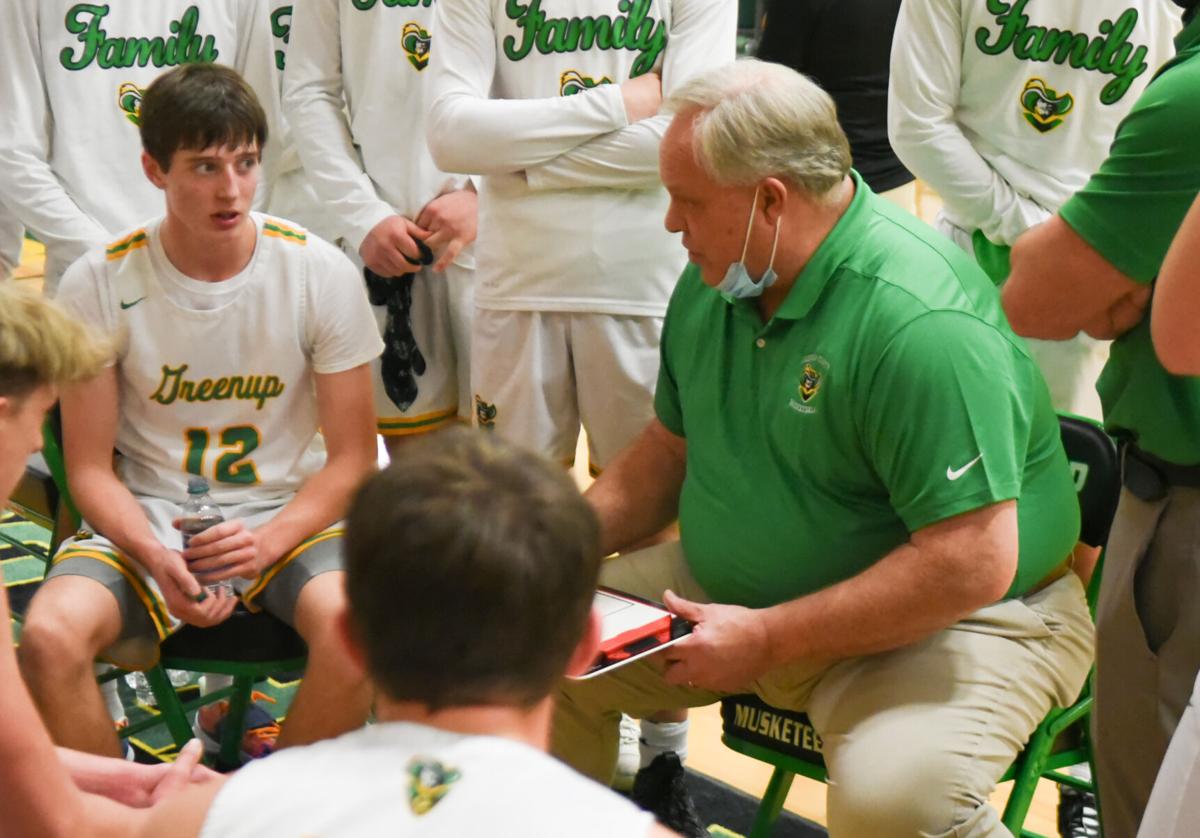 Greenup County coach Steve Barker instructs his team during a timeout against Lewis County on Friday.

Greenup County's Nick Hewlett passes the ball as he is pressured by Lewis County's Bailey Thomas on Friday night.

Lewis County coach Scott Tackett talks with his team on Friday during a timeout against Greenup County.

Greenup County's Nick Hewlett puts up a shot in the lane as Lewis County's Drew Noble and Kolby McCann defend on Friday.

Greenup County coach Steve Barker instructs his team during a timeout against Lewis County on Friday.

Lewis County found a spark from its players off the bench after several stagnant moments to start the game at the Greenhouse. The substitutions energized the Lions and helped them gained some separation heading into halftime.

Lewis County collected 13 bench points in the opening half to grab a quick lead and went on for a 65-53 victory on Friday night.

“There were four kids off the bench that I played in the first half,” Lewis County coach Scott Tackett said, “and I told them in the locker room if I had a game ball, I would give them all of them one. They are Levi Burriss, Ethan Sizemore, Hunter Jordan and Drew Noble. … Not only were they good defensively, they scored 15 of our 29 points in the first half.”

“We did some scrimmaging in practice to try and find plays to get kids like Ethan Sizemore on the floor,” he added. “I told the starters that you have to start producing and come out of the gate ready to play. We have a bunch of kids that I feel confident in playing.”

Burriss splashed two triples and Sizemore added another in the first two quarters. Noble, a 6-foot-4 eighth-grader, stood tall in the post guarding Musketeers’ Trenton Hannah down low, according to Tackett.

The starters found a rhythm after intermission. The Lions stretched the advantage to 39-31 at the end of the third quarter with a 7-0 spurt. Kolby McCann started the scoring stretch with a bucket in the paint. Trey Gerike had a steal and score and McCann supplied an and-1 in transition.

“Unlike my personality most of the time, I have been really patient with this group,” Tackett said. “It’s a new system then starting and stopping because of COVID-19. I peeled some paint at halftime with a couple of kids, but what a second half Trey Gerike had. He was a difference maker. I told him if you play like that, you are a top-10 player in this region.”

Gerike led the way with 17 points. He hit all eight of his free throw attempts in the fourth stanza and nine of 10 for the game. Logan Liles connected on three treys to finish with 15 points and McCann contributed 12 for Lewis County (1-1).

Greenup County is still navigating new territory with no one on the roster that had any varsity experience heading into the season. The Musketeers committed 12 turnovers in the first half but had just seven in the final two frames.

“It’s the thing that we are battling right now,” Barker said. “In the moment, who is going to step up and make that play. They are working hard. Experience means everything. They are gaining valuable experience right now. The games (this week) count. … We have to clean up some things as far as turnovers. We are going to keep working. We did a better job rebounding.”

Greenup County (0-2) opened the new season with consecutive 63rd District seeding games. It will prepare the team for similar games as the season goes on.

“You get to watch film and you get to know a little more about each team,” Barker said. “We’ve gone in blind because there was no film. The kids were familiar with some of the guys because they played against them in junior varsity games. I think by mid-February you should see a different group.”

Hannah was active in the paint. He recorded his second straight double-figure performance with 16 points and five rebounds. Boone Gibson netted 14 points.

“We were trying to get him touches (tonight),” Barker said of Hannah. “He makes a lot of things happen. He plays extremely hard. Until we had to go to five guards late, he hadn’t been out of a game. … I love all the kids. They work hard and they are really close.”

Hannah’s basket cut the Musketeers deficit to one midway through the third period, but the Lions increased it to 48-39 after Liles splashed one from downtown in the final frame. Lewis County made 15 of its final 16 shots at the foul line to seal the deal.

“We shared the ball better tonight,” Tackett said. “We only had four assists against Mason County earlier this week. I don’t how many we had tonight because we missed a lot of bunnies again. All we can do is to continue to get good shots and hopefully they will start falling for us.”

“This was a game they were looking forward to,” he added. “Coach Barker did a phenomenal job with his squad. They were ready to play and had a good plan. It was a good test for us.”