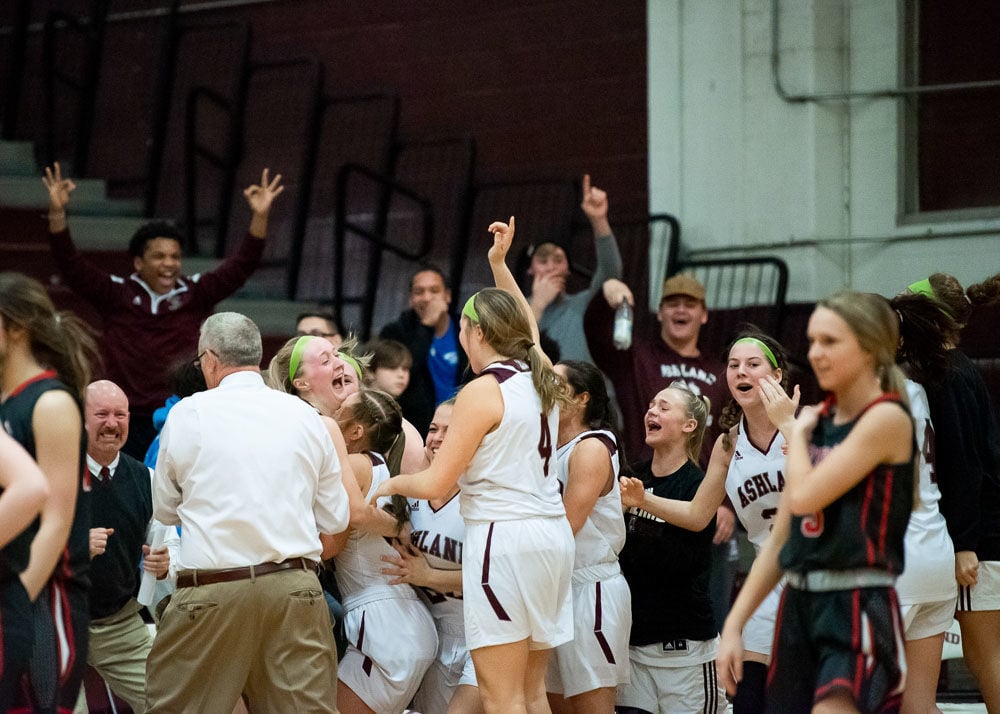 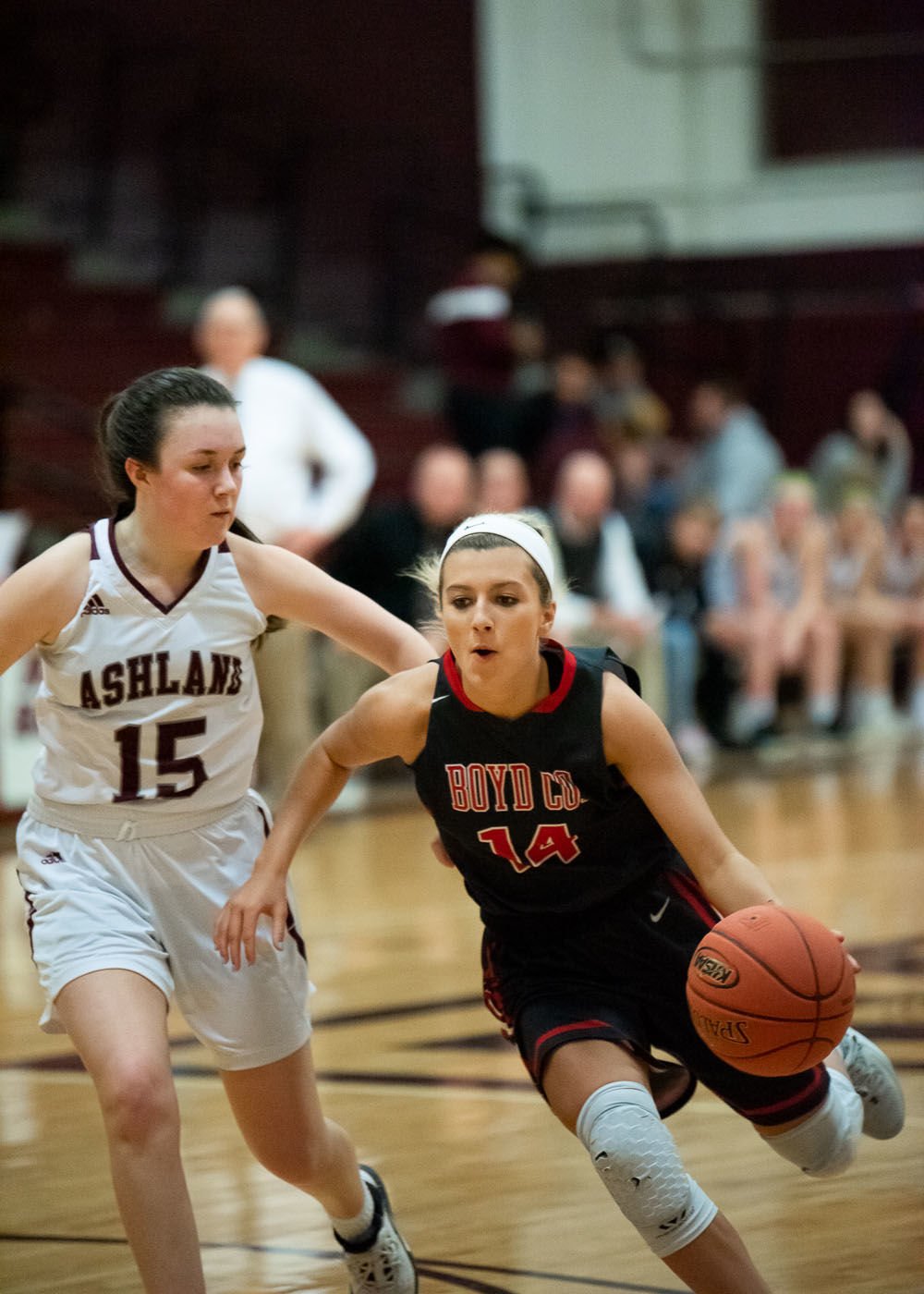 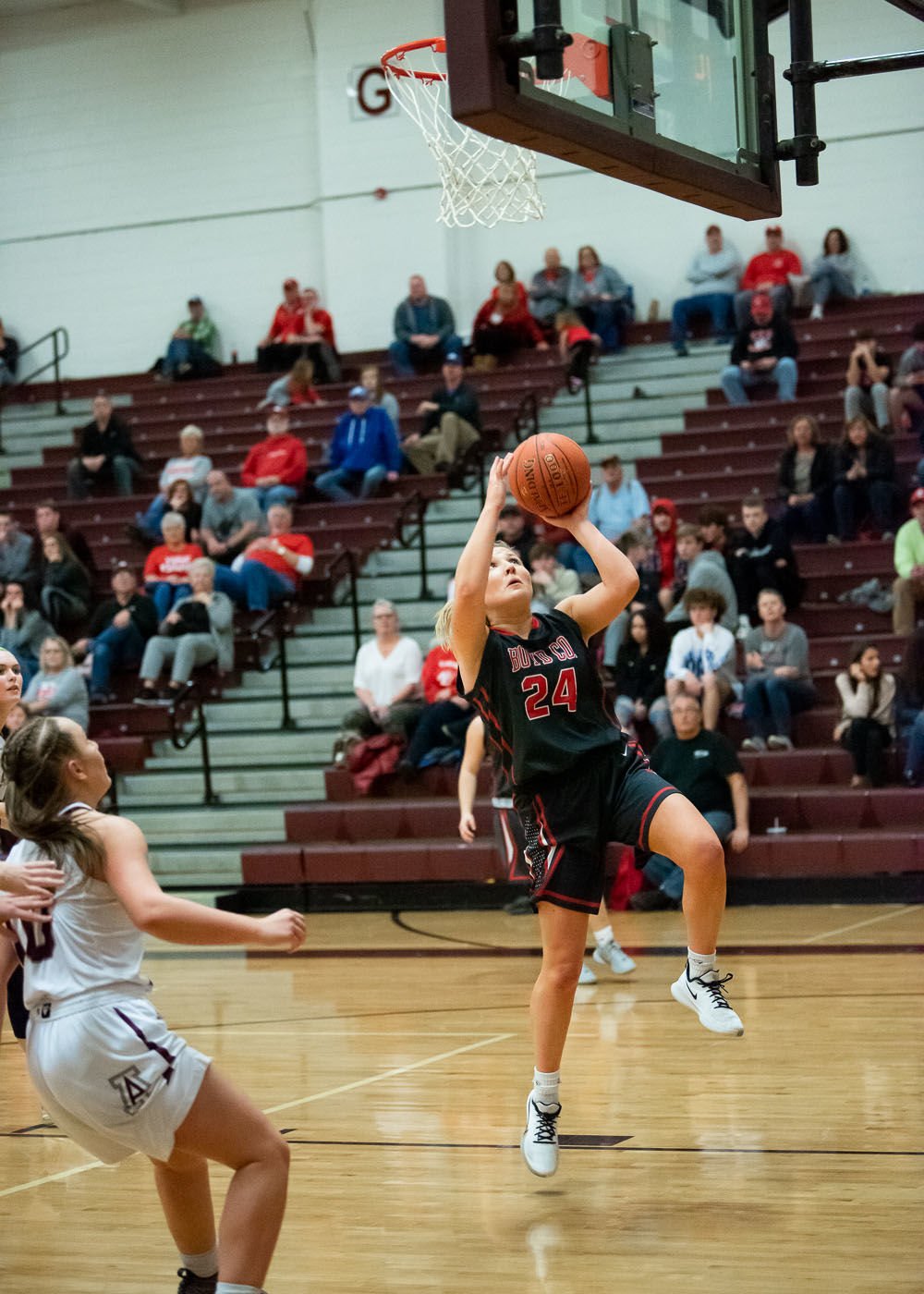 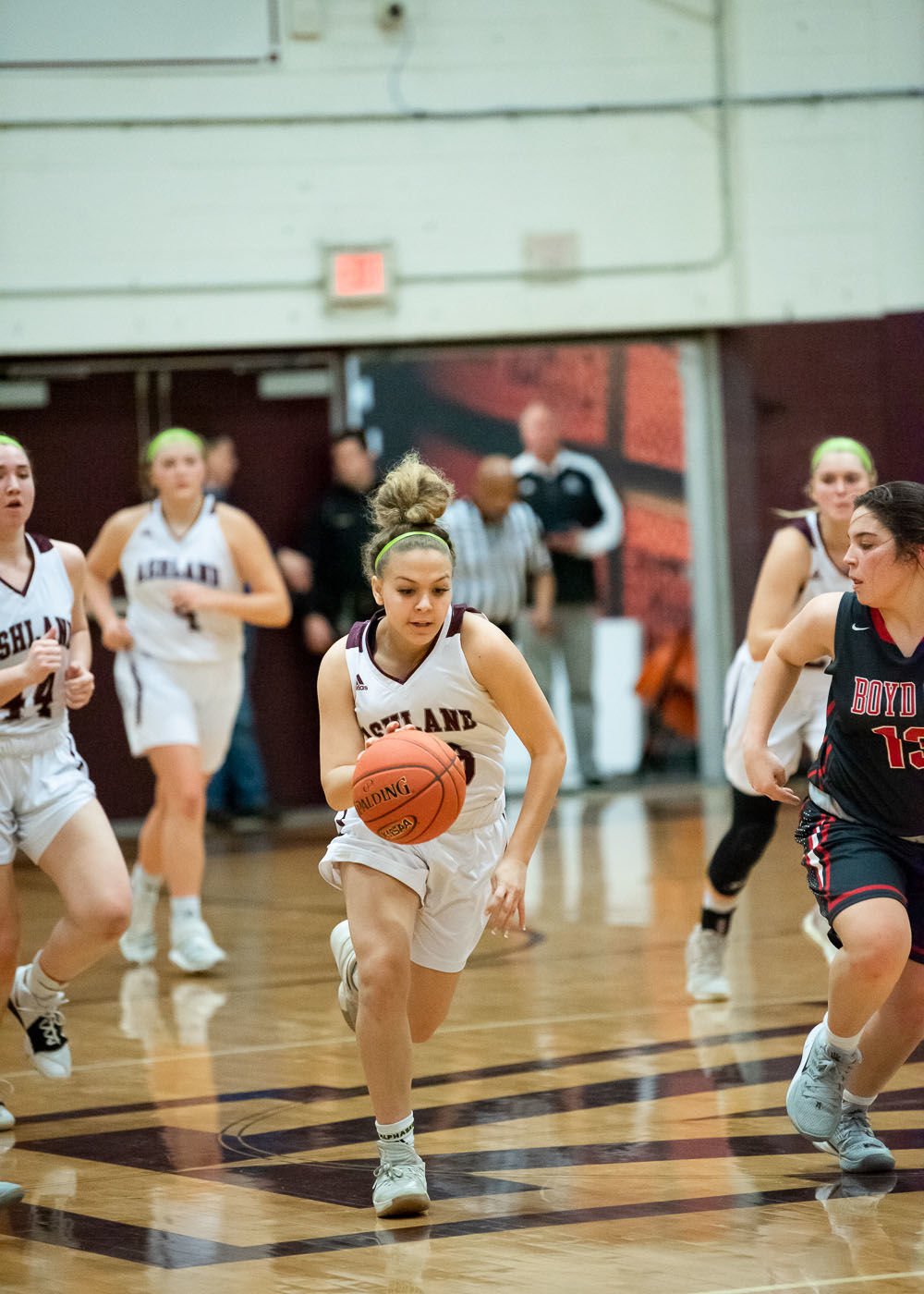 Lady Kitten's #23 Casey Waltenfeltz bringing the ball down the court with authority. 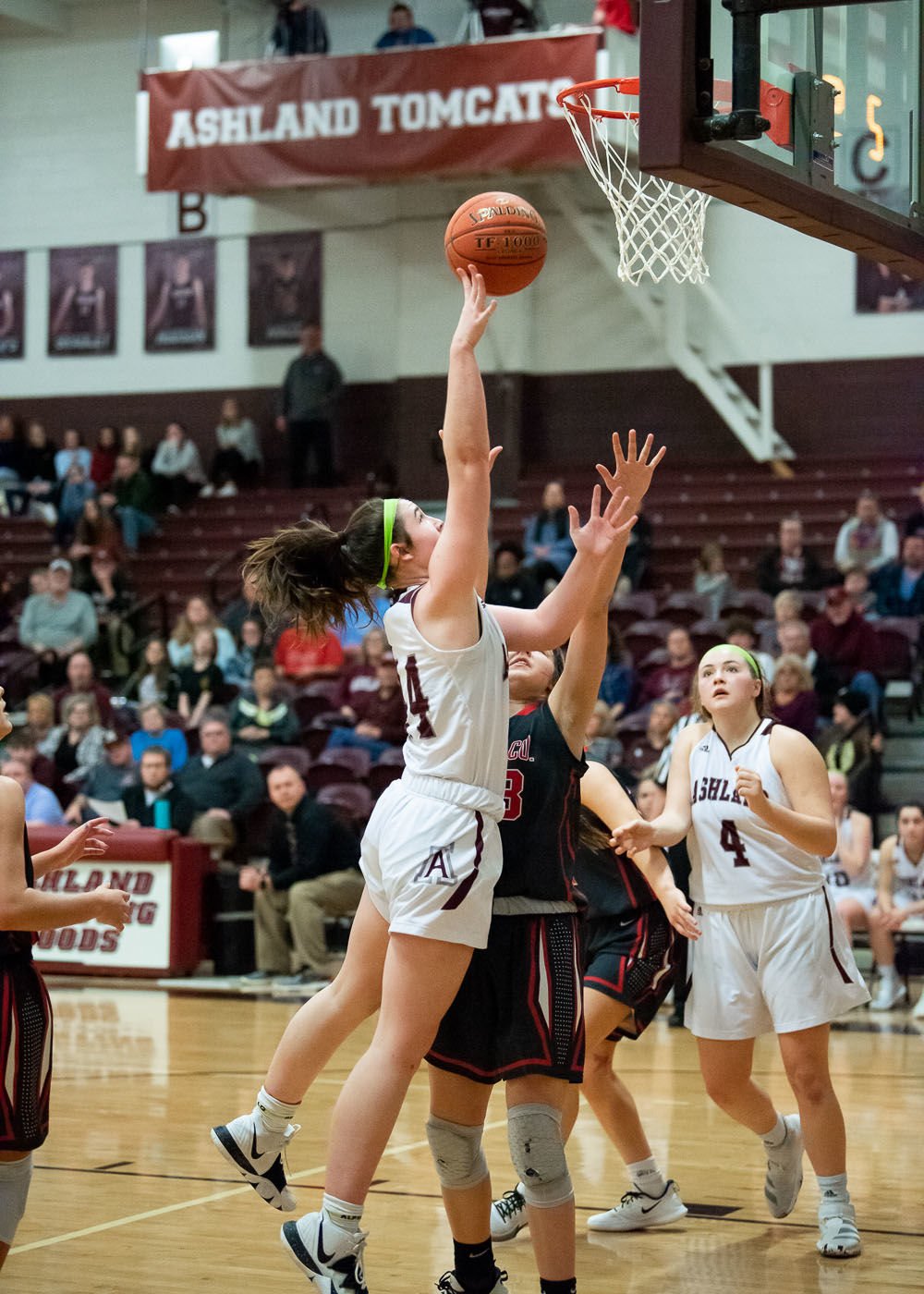 Mikalya Martin #44 for lays in 2 for the Lady Kittens 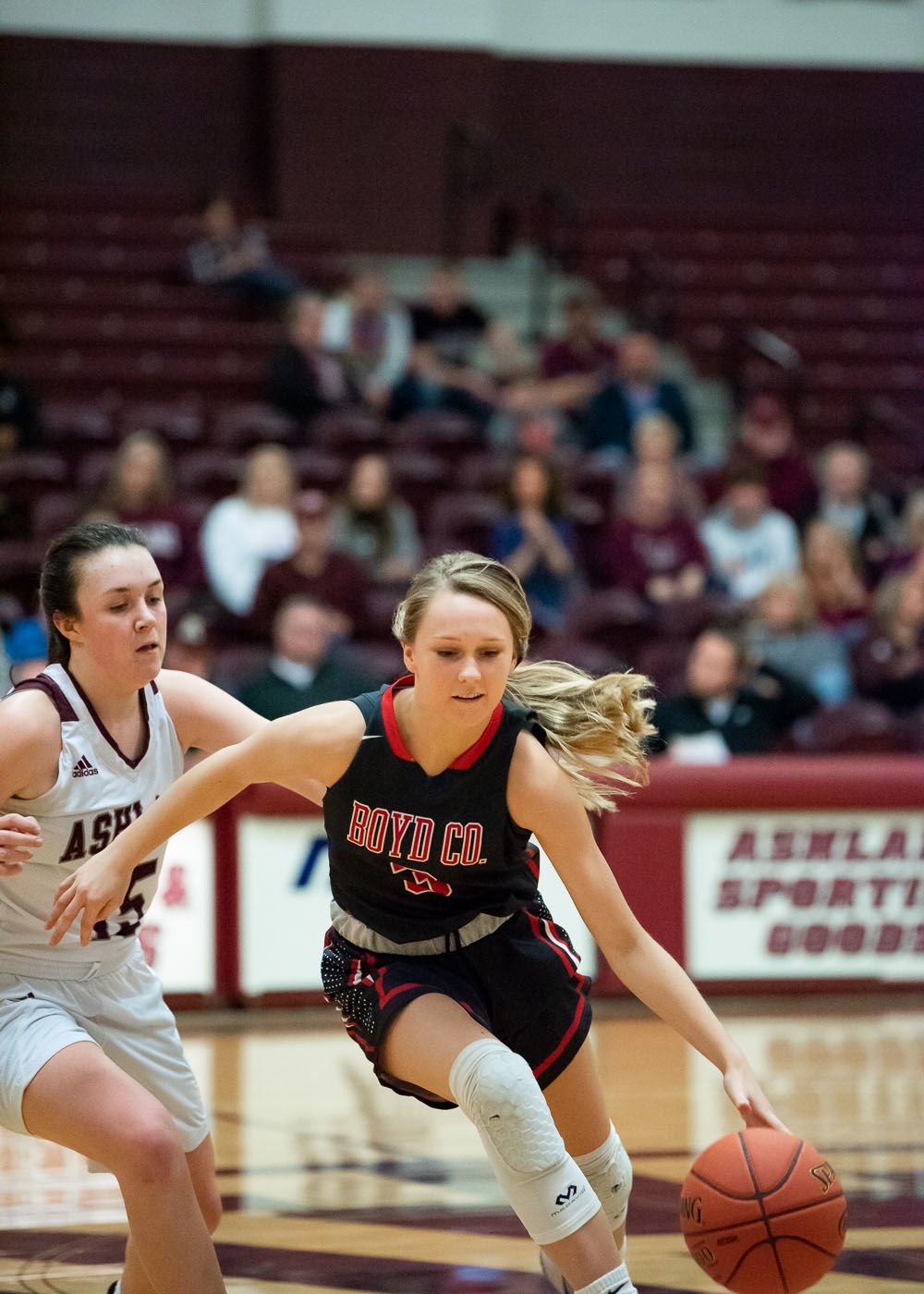 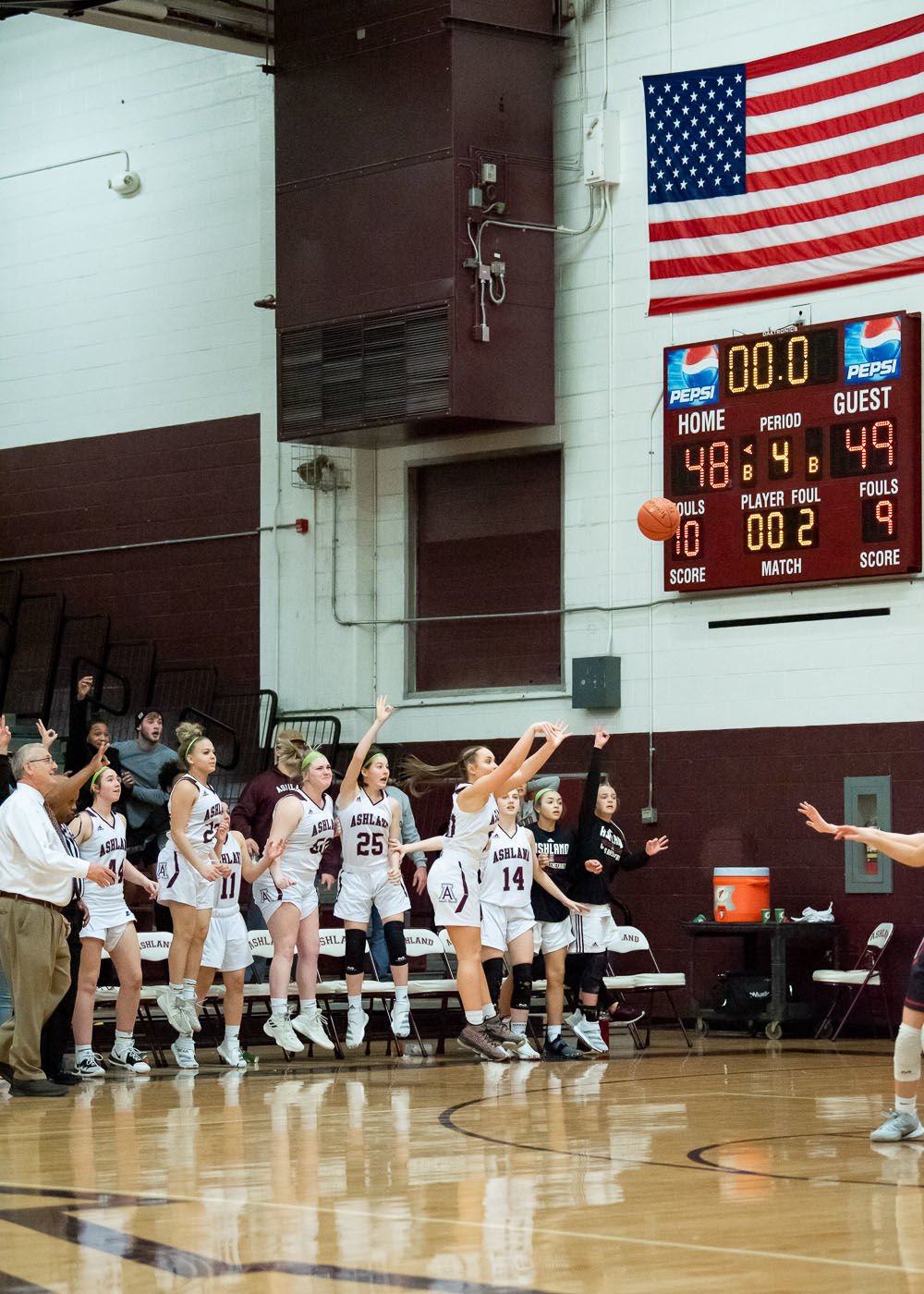 Lady Kitten's #23 Casey Waltenfeltz bringing the ball down the court with authority.

Mikalya Martin #44 for lays in 2 for the Lady Kittens

ASHLAND Jada Miller wasn’t even supposed to be there.

Ashland, trailing Boyd County by a point with 5.4 seconds remaining, took the ball out in backcourt on the sideline opposite the benches at Anderson Gym.

Carley Cullop drove as far as she could and found Syd Sorrell near the 3-point line. Sorrell spotted Miller open on the left wing — where Kittens coach Bill Bradley had moved her, instead of having her take the ball out as originally planned.

That proved serendipitous for Ashland. Miller swished a 3-pointer as time expired to complete a furious Kittens comeback from seven points down with 50 seconds to go to top the Lady Lions, 51-49, on Tuesday night.

Miller was 0 for 5 from the perimeter before the last shot. She didn’t have time to think about it.

“As a shooter, it’s hard going into a streak where you don’t really make a lot,” Miller said, “but you gotta keep in your head, you’re gonna make it. You gotta just trust your instincts, and all I could do right there was just shoot the ball. I was wide-open and time was running out.”

The Lady Lions rallied from a six-point deficit midway through the third quarter with a 19-5 run, leading from Isabella Caldwell’s runner in the lane with 1:13 to go in the third quarter all the way until the final horn. Gracie Opell hit two free throws with 57.6 seconds remaining to forge a seven-point edge for Boyd County.

But the Kittens outscored the Lady Lions 11-2 from then on, using every tenth of a second of that time.

It began with Julia Parker’s trey with 50 seconds to go. Boyd County got a stop on the Kittens’ next trip, and Harley Paynter came down with a rebound while being fouled with 35 seconds left, still up four. But Paynter got tangled up with an Ashland player after the foul was called and referee Randy Taylor declared a technical foul.

That was Paynter’s fifth foul, disqualifying her from shooting the free throws she had drawn.

“I didn’t agree with the technical foul, but he called it; we’ll live with it,” Lady Lions coach Pete Fraley said. “The thing that hurt also, it was the fifth foul. She didn’t get to shoot the two free throws at the other side. That’s something obviously I disagreed with. That’s OK. We’ll move on.”

Paynter’s replacement off the bench made one of two foul shots. Parker responded by converting both technical freebies, and she drained another triple nine seconds later to tie the game.

The Lady Lions again got one of two charity tosses to go down at :06.7. After both teams burned their final timeout, Ashland’s inbounds pass was deflected out of bounds by Boyd County with 5.4 seconds to go, setting up the final sequence.

“We just wanted to stay in front of them and make them shoot a tough shot,” Fraley said. “Sorrell made a great pass to Jada, who knocked the shot down with maybe one or two tenths of a second left on the clock. It was a big-time shot for her.”

Ashland (16-8) won for just the second time in eight games decided by six points or fewer, including the teams’ first encounter, a 58-52 Lady Lions victory on Jan. 13.

“We’ve had a lot of those over the years,” Bradley said, referring to close encounters with Boyd County, “and this is really sweet. We’ve had a lot of close games this year, lost by a basket or two against really good teams, and we needed a win like that bad. I’m glad we got it.”

Tuesday’s decision didn’t count toward 64th District seeding — district athletic directors voted to play only one round of seeding games this season, which was completed with the Lady Lions claiming the top seed and a bye to the district tournament final — but it paused Boyd County’s domination of the series. The Lady Lions (14-10) had won 13 of their last 14 meetings with the Kittens.

“My career as a high school player, we haven’t won too many of those,” Miller said. “It’s a big game always and (Boyd County is) a great team, so it was a good win.”

Mikayla Martin posted 17 points and 11 rebounds for the Kittens, and Parker pitched in 13 points. Bradley credited Sorrell’s work in relief of Martin and Morgan Bradley, who battled foul trouble, as well as Cullop’s point-guard efforts.

Opell scored 11 points to lead the Lady Lions, who finished 2 for 21 from 3-point range. Paynter scored 10 points, finally breaking through against Ashland’s triangle-and-two defense to score six points in the final 77 seconds of the first half.

“We don’t quit,” Fraley said. “We grind, and we knew it was gonna be a grind coming in here, a game in the 40s, 50s, and tournament time, you gotta win games like that. They came out on top tonight. We’ll see them again here hopefully in a couple weeks.”