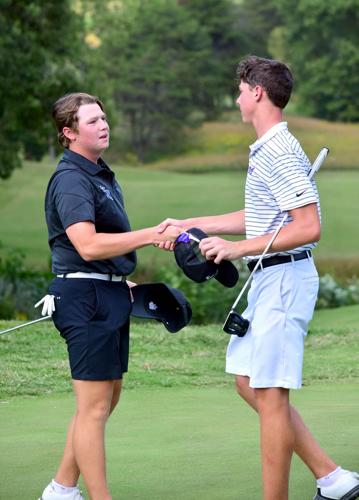 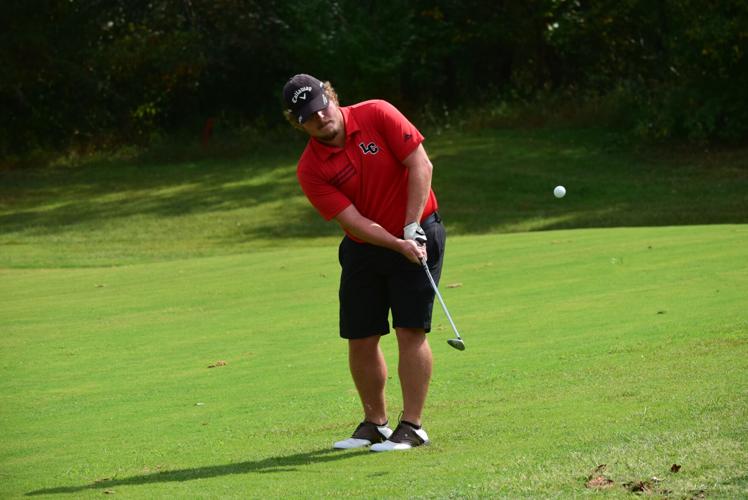 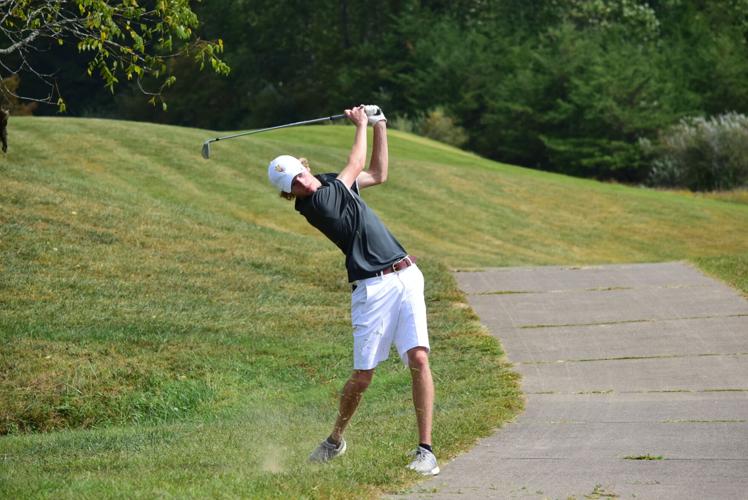 Russell’s Torin Kirk hits a shot during the Region 12 Tournament on Monday at Hidden Cove. Kirk and the Red Devils qualified for the first round of the state tournament as a team. 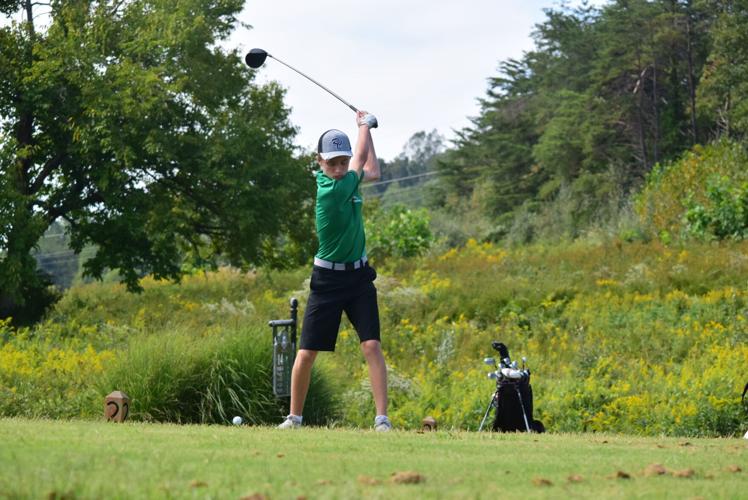 Rowan County’s Will Jones tees off on Monday. 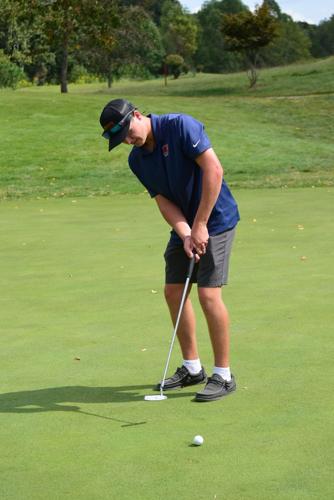 Russell’s Torin Kirk hits a shot during the Region 12 Tournament on Monday at Hidden Cove. Kirk and the Red Devils qualified for the first round of the state tournament as a team.

Rowan County’s Will Jones tees off on Monday.

GRAYSON LAKE Bryson Bennett had something special for his team stashed in his car in hopes his Mason County squad could accomplish one of the toughest feats in any sport.

With all five golfers carding scores in the 70s, Bennett’s investment in Mason County three-peat T-shirts paid off as they cruised to the Region 12 Tournament team championship by 20 strokes (297) over runner-up Russell (317) at Hidden Cove on Monday.

“I bit the bullet and if it didn’t happen, it didn’t happen,” Bennett joked of the shirts. “They would’ve just gone in the trash. I just think it looks kind of cool. You see the NCAA with those kinds of shirts on. Hey, this is high school, but I want to let the kids have a little bit of fun.”

Mason County was paced by Grant Owens’s 2-under-par 70 and Jake Feldhaus’s even-par 72 to silence the critics after the Royals departed much of their team last season.

“At the beginning of the year, everybody probably doubted us,” Bennett said. “Losing four seniors, they didn’t think Mason County was going to do anything. I thought, we had the talent, but could we execute? We actually shot one less than our average and that was one of our goals. Shoot our average, and if we get beat, we get beat.”

Owens secured the individual championship by outdueling Montgomery County’s Brett Marcum on the second playoff hole after both narrowly missed birdies on No. 17 in the sudden-death format.

“Seventeen has always been a good hole for me, and it’s one of my favorite holes,” Owens said. “I hit a mediocre second shot. I wanted to hit it to the center of the green and see if I could let Brett beat himself. He hit a really good drive and a good second shot, and we both made fours to move on to the second playoff hole. Then it went my way from there.”

After a solid tee shot by Owens on 18, the Royals senior found the green with a chance for birdie, while knowing that par and possibly even bogey would be good enough for the crown.

“The wind was howling and Grant stuck a great shot there from about 200 yards with the wind against him,” Bennett said. “It was a beautiful shot to get on the green.”

Marcum found trouble off the tee at 18 and the tough luck followed him on the next shot, opening the door for Owens to secure the win.

“I was looking to put something in the fairway there and I got a little anxious and my wrists got a little strong and kind of snap hooked it,” Marcum said. “Luckily, it came back into play, but I caught a flier lie off that second shot and it just rolled into the hazard.”

Marcum’s shot landed on the green, but after Owens’s roll for birdie came up well short, the sophomore believed he had one final shot at staying in the match.

“I felt like the door crept open for sure a little bit,” Marcum said. “I just could not capitalize on it. It was a tough putt that I had—it was a 35-footer to try and stay in it. (Owens) is a great golfer and he doesn’t make those stupid mistakes.”

Owens’s par putt slid past the hole, leaving a one-footer for bogey and a region championship.

“My goal has always been to be bogey-free,” Owens said. “I may not gain as many shots on the field as some people do, but I like to not lose as many, too. Today was really windy, so just putting the ball in the fairway and keeping it out of trouble and preventing big numbers in the wind was a big thing for me.”

Owens’s familiarity with the course as well as the structure of a playoff put him in the driver’s seat coming up the hole that had been a thorn in the side of the field all day.

“I’ve been here before and I know how playoffs can get to people’s nerves,” Owens said. “I feel like I have one of the strongest mental games in the region and the state. To win the region like that, I pride myself on not letting my nerves get to me too bad or not letting bad shots affect the next shot.

“I just wanted to execute the second shot, and I knew that four or five was going to win it at that point. That just makes it easier, when you don’t have to make a 45-footer for birdie just to win. You can just lag your way up there and not make too much of a mess of it and win it the easy way.”

Marcum and Owens started opposite each other in the shotgun start, with Owens going off No. 1 and Marcum starting his round on 10.

“It was tough today and that wind was gusting,” Marcum said. “They had the pins in some awkward positions today. I played really well on the back nine. I had my game intact, really all day. I made a couple stupid bogeys here and there, but overall, made some birdies and plenty of pars.”

But Owens had no idea of Marcum’s round due to the lack of live scoring because of sparse cellular service on the course. Rather, Owens thought he was keeping pace with a player in the final group up 18, only to find out his round was good enough to ensure extra holes for the title.

“At the time I thought I was on the line with a playoff with a player behind me,” Owens said. “I had no clue about Brett at the time. I hit a not-too-good second shot and had to scramble onto the green and left my par putt significantly short coming down the hill. I had a four- or five-foot slider coming back and I was just trying to match the pace and I knew that if I made that, my chances were pretty good.”