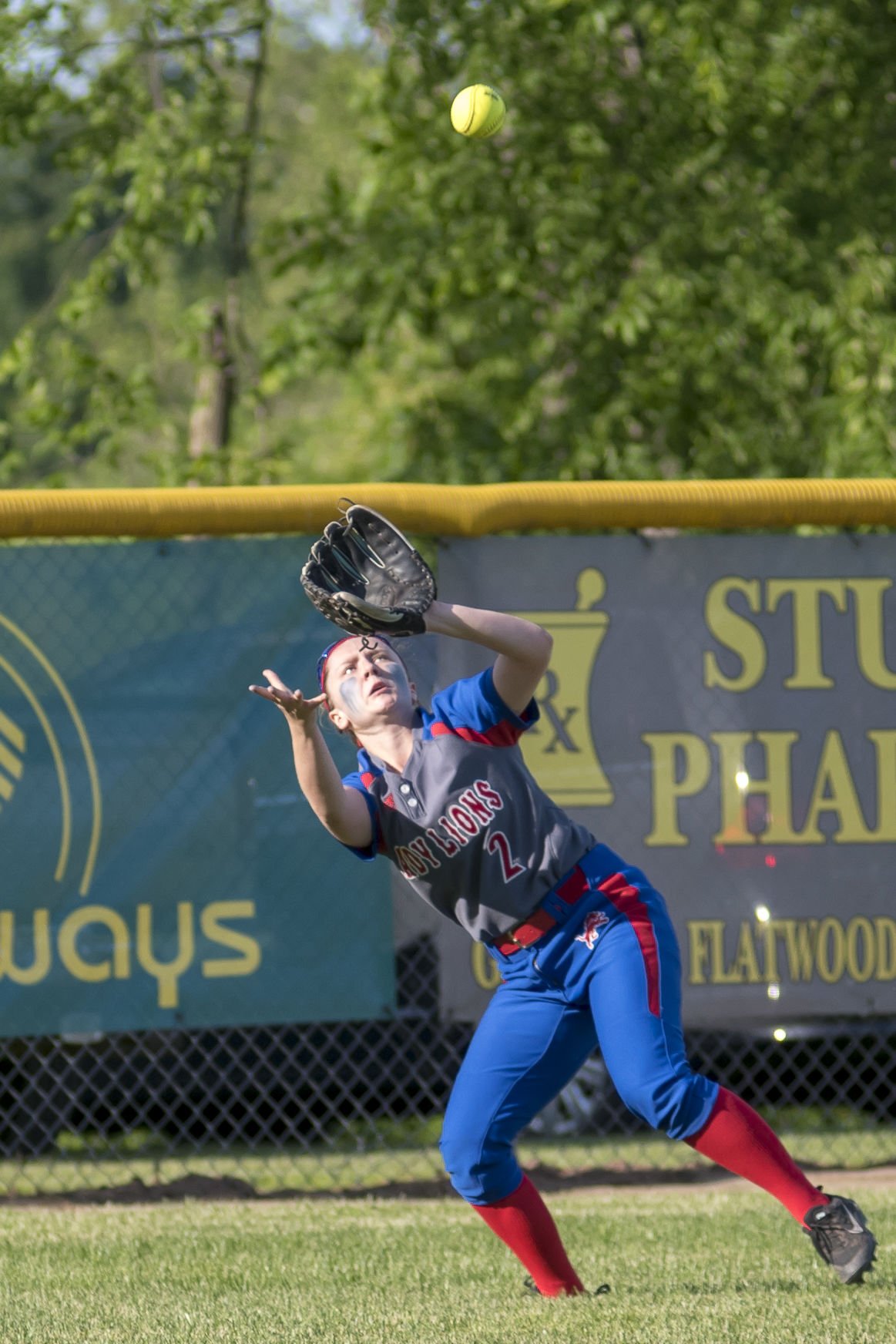 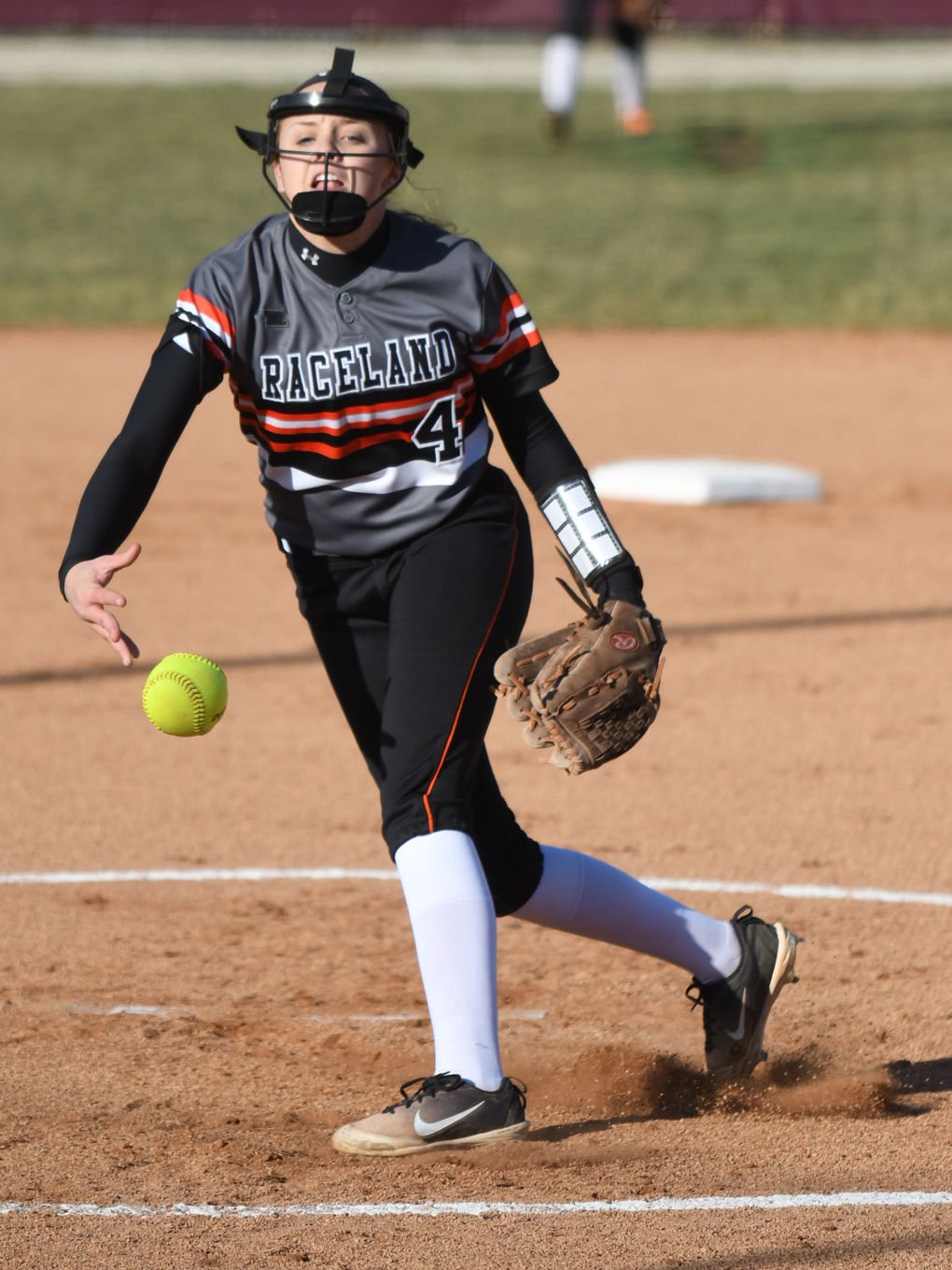 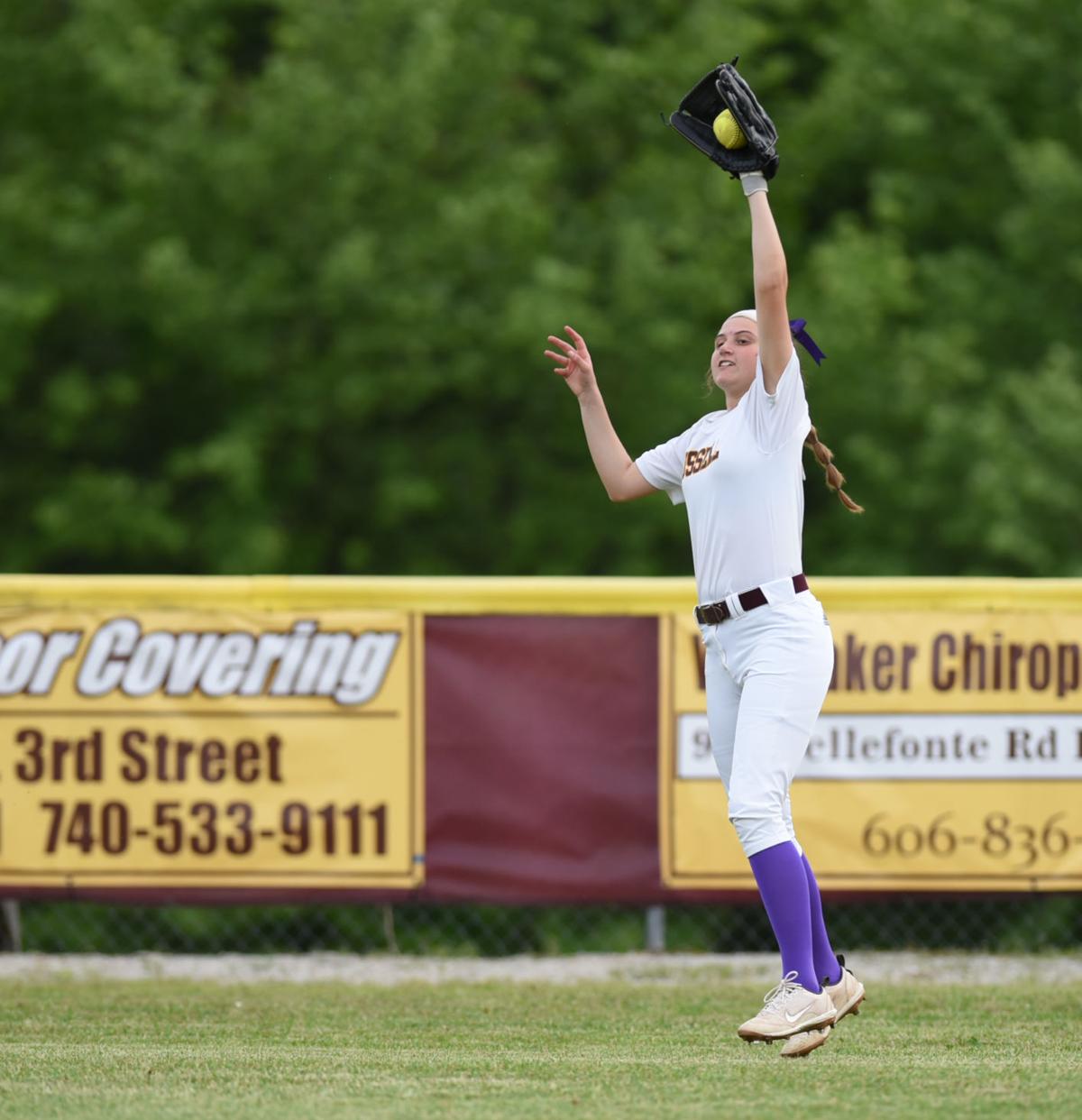 Olivia Inskeep of Russell makes the catch for the out on Thursday against Ashland. MARTY CONLEY/ FOR THE DAILY INDEPENDENT 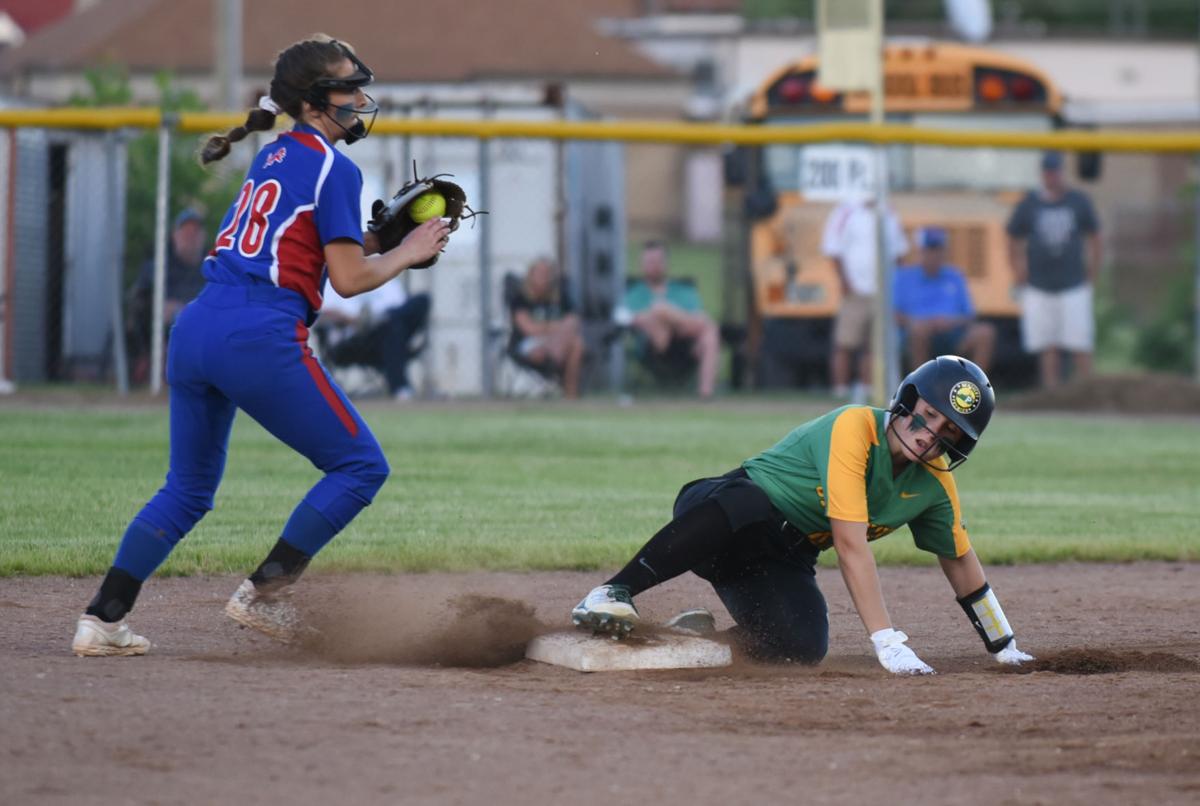 Greenup County's Zoey Keeton slides into second base on Monday against Lewis County. MARTY CONLEY/ FOR THE DAILY INDEPENDENT

Olivia Inskeep of Russell makes the catch for the out on Thursday against Ashland. MARTY CONLEY/ FOR THE DAILY INDEPENDENT

Greenup County's Zoey Keeton slides into second base on Monday against Lewis County. MARTY CONLEY/ FOR THE DAILY INDEPENDENT

A trip around the dugouts of the 63rd District softball squads may be similar to attending a family reunion when searching for the head coach.

You recognize everyone but are not really sure who they are.

This is the case this season with all four teams touting new skippers. However, three are familiar faces around the district.

“I am new to this, so whoever coaches any team will be a new face to me. It is all going to be new,” Lewis County rookie coach Joe Hampton said.

Hampton is the longest-tenured boys basketball coach in the 16th Region and is fresh off leafing the Lions to their eighth district tournament title and a trip to the region final. He steps off the hardwood and onto the diamond for the first time in his career — though Hampton did fill in as volleyball coach for one match last season — leaving the veteran in unfamiliar territory.

As for the others, West said he expects things to be business as usual in the district.

“I’m used to seeing Nikki and Katie in the dugouts and coaching against them,” West said. “Both of them do a great job and I don’t foresee anything changing. I’m also used to seeing Joe coaching on the sidelines, so I look forward to seeing him transition into softball. The district has lost some very good coaches, but I have no doubt that all four schools will continue to have successful programs.”

Do not expect to see Hampton in a shirt and tie in the coach’s box this season. Oddly enough, it would be about as unique as seeing the 20-plus-year basketball coach stepping on the diamond for the first time in his career. Regardless, Hampton returns a team that lost only two seniors last season and returns its ace in Emily Cole to the circle.

The fiery righty fanned 181 batters last season with a comfortable 2.23 earned-run averge as only an eighth-grader. Hampton was quick to respond to who the key to the team would be this season with Cole, but swiftly added, “They will all be needed if we are going to be successful.”

Hampton returns the nucleus of the Lady Lions offense from last season as well. Fellow freshman Kayla Sullivan joins Cole as the power to the pop of the Lewis County offense. Sullivan led the team with a .449 average and 10 of the 14 long balls hit by Lewis County. Cole was at .350 with 10 doubles. Junior Madison Liles hit .330 as a sophomore while driving in 23 runners. Her best accolade — she was credited with a strikeout only eight times last season, which returns the most consistent hitter to the lineup as well.

It was there for the taking last season for the Lady Rams after their archnemesis of East Carter was finally out of the region picture. Raceland played its way into the championship game, only to run into a blistering hot Ashland lineup that topped the Lady Rams, 12-0.

Raceland graduated three seniors but returns every piece of the battery, including a three-headed monster from the circle in Raegan West, Cam Davidson and Kierston Smith. West logged the most innings (83) in the circle with Davidson (75 1-3) and Smith separated by only a third of an inning. The biggest issue from the circle last year for the Lady Rams was control, as they struck out 145 batters while walking 111.

Still, West believes the trio will be the team’s biggest asset.

“I believe pitchers will have an advantage early on,” he said. “Thankfully for us, we have three pitchers that are ready to go. This season may be the most ready we’ve been to step into the circle right out of the gate.”

West will also have a large collection of a lineup that batted .380 last season, missing only Rylee Austin (.430) from the top five hitters by average. Chloe Collins hit for a .492 average with 14 doubles and 14 homers. She also drove in 67. As a team, Raceland tallied 87 doubles, eight triples and 30 long balls and the majority of that pop returns this year.

Regardless of the players returning, West said no one player stands above another.

“Each girl knows that they have a role to play on the team,” he said. “The only way for us to be successful and make a run is we must put individual stats and egos aside. We will put two girls on the field that have already verbally committed and I look for three or four more to commit soon or find a home at the next level with our juniors and seniors.”

Beek inherits a coaching problem no one wants, inexperienced pitching. With the exit of senior Haven Layne and Jaedon Boggs not returning to the field, Russell has zero varsity innings on the field when and if it takes the field this season.

“We’ve got to find out who can fill what role throughout the lineup and we will have to grow up in the circle fairly quickly,” Beek said.

Layne sparked the Russell offense with a .505 average, 15 doubles and 28 RBI. The lone returner from the top of the stat sheet is sophomore Lilly Holland, who hit .422 as a freshman.

“She’s a returning starter who may see time in different areas on defense due to injury,” Beek said of Holland. “On offense, she will bring a great eye and a reliable bat every time she’s at the plate.”

Joining Holland as a returning starter will be Ansley Dotson and Josie Atkins. Dotson hit .329 last season and Atkins appeared in 12 games.

“Dotson was a very good second baseman for us last season,” Beek said. “She also offers some versatility at the plate, so we can use her in different places in the order if need be.

“Atkins is an exceptional athlete and brings a ton of speed. She’s gained confidence in her defensive ability in the outfield, and she’s learning how to become the top of the lineup hitter we need her to be.”

Greenup County always seemed to find that one inning last year that cost the Lady Musketeers more than a handful of wins. Unfortunately, it was the final inning and none more disheartening that cost Greenup County a 2-1 loss in eight innings to eventual district champion Lewis County on their home field.

The biggest challenge Daniel faces to start this season is pitching, as starter Mykenzie Crosier leaves due to graduation after starting all 26 games. Add to that mix of not having a consistent catcher and Daniel was quick to point to her biggest concern as the skipper.

“Our current pitching and catching staff have seen very few (if any) varsity innings,” Daniel said. “That being said, they have all been working extremely hard up to this point and I have no doubt that they will be able to get the job done.”

Greenup County has yet to tab the starter for this season but hopes to use its offense to help fill the void. Returning are all five sluggers at the top of the average category for the Lady Musketeers. Shay Moore hit .438 to lead the way with 11 doubles and 19 runs driven in, both best for the team. Ellee Hunt, Emma Boggs and Zoey Keeton hit over .300 last year and hope to continue that stride this season.

“We have several returning starters that have experience on the field and in the batter’s box,” Daniel said, “as well as some additions to the varsity team that have shown a lot of promise. Our team is not about any one player. It's the body of players as a whole that will determine how successful we are this season.”

Coaches are not used to starting a season with a dead period limiting conditioning, scrimmages and workouts leading into the season. However, due to the COVID-19 pandemic, this is where every coach in the state currently sits with an imposed dead period in place until at least April 12. However, most of the coaches are just taking the extra downtime in stride, anxious to start the season.

“Obviously the situation is not ideal, but every team will be facing the same challenges,” Daniel said.

“Nevertheless, we have some very dedicated athletes who will hopefully take it upon themselves to still get their throwing and swings in independently, despite being unable to practice together as a team.”

Beek said the Lady Devils are just trying to adapt as best as possible.

“If there is to be a season, it looks like it would be starting somewhere around what would typically be midseason at the earliest,” she said. “The time you are usually finding your stride is now going to be the time you are just starting to see what you’ve really got.”

Regardless of the outcome, Hampton’s take may have summed up the situation the best for the state as a whole.

“We are missing reps and the in-game experience,” Hampton said. “You can’t replace that. But all schools are in the same boat so it won’t be a disadvantage or advantage to anyone.”

Coach's outlook: “Our coaching staff has been really excited about our hitting this year. If these girls continue to hit in games the way they did at our scrimmage, we can absolutely do some really big things this season.”

Coach's outlook: "Speaking from very limited observations and past knowledge, pitching will be a strength, but I was impressed with our glove work and power at the plate as well.”

Coach's outlook: “We have a veteran team this year. For years we’ve been the school that was young, or a year or two away. This year we will put a solid lineup on the field 1 through 9. The entire lineup hits the ball and they hit it hard. This group of girls have played softball together since they began playing the game. We can play multiple positions and we may not look the same every game when we take the field.”

Coach's outlook: “Time is on our side. We have one of the youngest teams I’ve been around. One good thing about youth is we can throw around the word ‘potential.’ We’ve definitely got some, it’s just a matter of at what rate we can come along. But we are going to be all in and go all out.”