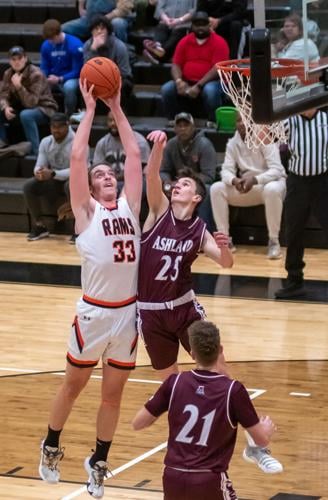 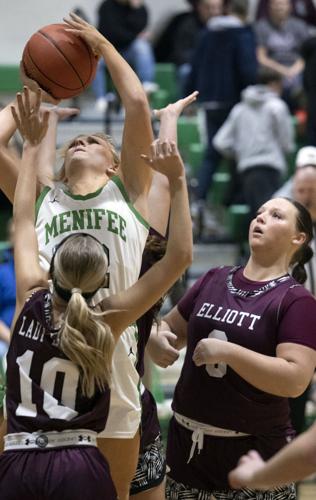 Menifee County’s Shalyne Baker shoots a short jumper against Elliott County’s Kailey Hamilton during the 16th Region All “A” Classic on Jan. 13. 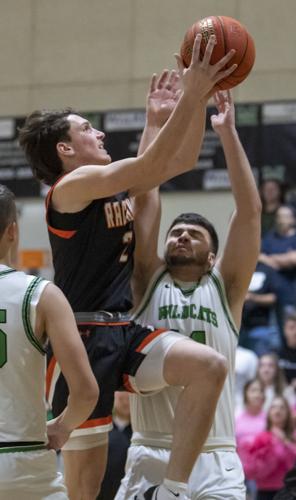 Menifee County’s Skylar Deskins attempts to block a shot by Raceland’s Holden Topping during the 16th Region All “A” Classic on Jan. 12.

Menifee County’s Shalyne Baker shoots a short jumper against Elliott County’s Kailey Hamilton during the 16th Region All “A” Classic on Jan. 13.

Menifee County’s Skylar Deskins attempts to block a shot by Raceland’s Holden Topping during the 16th Region All “A” Classic on Jan. 12.

For the first time in four seasons, a team from Olive Hill will not be representing the 16th Region at the All “A” Classic state tournament in Richmond this week.

The Raceland boys team will make its first trip to the big stage since 2019. Menifee County dethroned West Carter’s six-year reign after claiming its first region title on the girls side.

Both teams advance to McBrayer Arena at Eastern Kentucky University in pursuit of the small-school crown.

The Rams haven’t found the road to the state tournament paved with gold since winning the 16th Region hardware in Frenchburg on Jan. 12.

Raceland (10-9) didn’t find a win against Ashland, Lewis County, Russell or Fleming County. Coach Joe Bryan believes the battle scars will have his team ready to fight when the Rams meet University Heights (11-7) in the first round on Thursday at 8.

“We’ve played some really good teams lately,” Bryan said. “We try to do those things to get ready for any kind of tournament, whether it’s an All “A” state tournament or a district tournament. Our kids are battling. We may need to execute a little better, but I really like our effort. They come back to work the next day ready to get better.”

Menifee County (14-6) had a quick turnaround after winning the program’s first region All “A” championship since 2016, the last time a team other than the Comets hoisted the trophy.

The Wildcats dropped a game to Lewis County less than 24 hours later after experiencing a championship celebration on their home floor. But Menifee County arrives in Richmond today, winners of seven of their last games, with a renewed confidence after their latest accomplishment.

“(West Carter) has dominated this region for a reason,” Menifee County coach Adam Adkins said. “It seems like they’ve been the roadblock. Ally Stone from West Carter could fill it up. It was a special night to win a region title at home. We had seniors that felt like it was something that was missing on their checklist.”

“It was special for our fans and really good for our program,” he added. “I feel like we’re going to have a renewed interest. When you have a home game like that and cut the nets down, it is a rejuvenation for the program.”

Adkins has seen a desire to share the ball this season after Menifee County had one of the area’s best post players, Kelsie Woodard, to rely on last year. It’s allowed their offense to shine.

It will be one of the focal points today against Whitefield Academy. The two teams will play tonight at 5 at EKU.

“Our team motto is, ‘We over me,’” Adkins said. “We have a lot of weapons. Our (shooting) percentage shoots through the roof when we have kids that make the extra pass. In the last three games, we’ve really been moving the basketball. It’s going to be a tall order against Whitefield Academy because of its athletes and some shooters. Defense will be key for us. We like to press and put pressure on the other team in the back court.”

Raceland has fought through injuries this year. The Rams saw two starters leave that game at Lewis County last week. Holden Topping still remains a question mark, but Bryan hopes he can return on Thursday.

Christian Large is back in the lineup and he posted 25 points against Russell on Friday. Bryan said the team is near full strength and should have a normal rotation in Richmond.

“I think our guys will be OK with (the big stage),” Bryan said. “We played at Russell on Friday night. There wasn’t a seat to be had in the place. Our guys are used to playing in a big environment. Obviously, it wasn’t in a gym the size that we will play at on Thursday, but I can’t imagine it being any louder than it was Friday night.”

The Blazers program has competed at the All “A” state tournament 25 times. The Second Region champions features a balanced starting five in point production. Lemar Northington tops all scorers with 15.6 points a game.

Large leads the Rams with an average of 17.1 points a game. Connor Thacker is second with a 10.7 scoring clip. Jacob Gauze grabs 7.2 rebounds a game.

“We started our prep work on them,” Bryan said of University Heights. “It’s a school that has been in state All “A” Classic numerous times. If you look at their stats, they shoot 46% from the 3-point line. It’s definitely something we’re going to watch film on and find a way to counteract that.

“We’ll use any nervousness and the newness to the arena to stay locked in. We want to be focused on the game plan to do what we have to do to win.”

Adams said Whitefield Academy has a similar approach to defense. The Wildcats from Louisville have only given up 33 points a game. Whitefield Academy (15-4) is a zone team and Adkins said the team has concentrated on combating their 2-3 defense in practice.

Menifee County will have plenty of support at McBrayer Arena today. Several businesses closed on Wednesday. The school will send a pep bus as well. Even members of region championship teams from the early 90s will be in attendance.

The Wildcats are no stranger to a college court. Menifee County has played in the 16th Region tournament at Morehead for six straight years and won its first region game since 1998 and its second in school history last season.

“I’m sure EKU is pretty excited that Menifee County will be at the state tournament,” Adkins said. “There will be so many people there supporting us. We also played at the White, Greer & Maggard Holiday Classic and played a couple of games at Lexington Catholic. … We wanted to play in those type of games for that possibility of playing in the All “A” state tournament.”