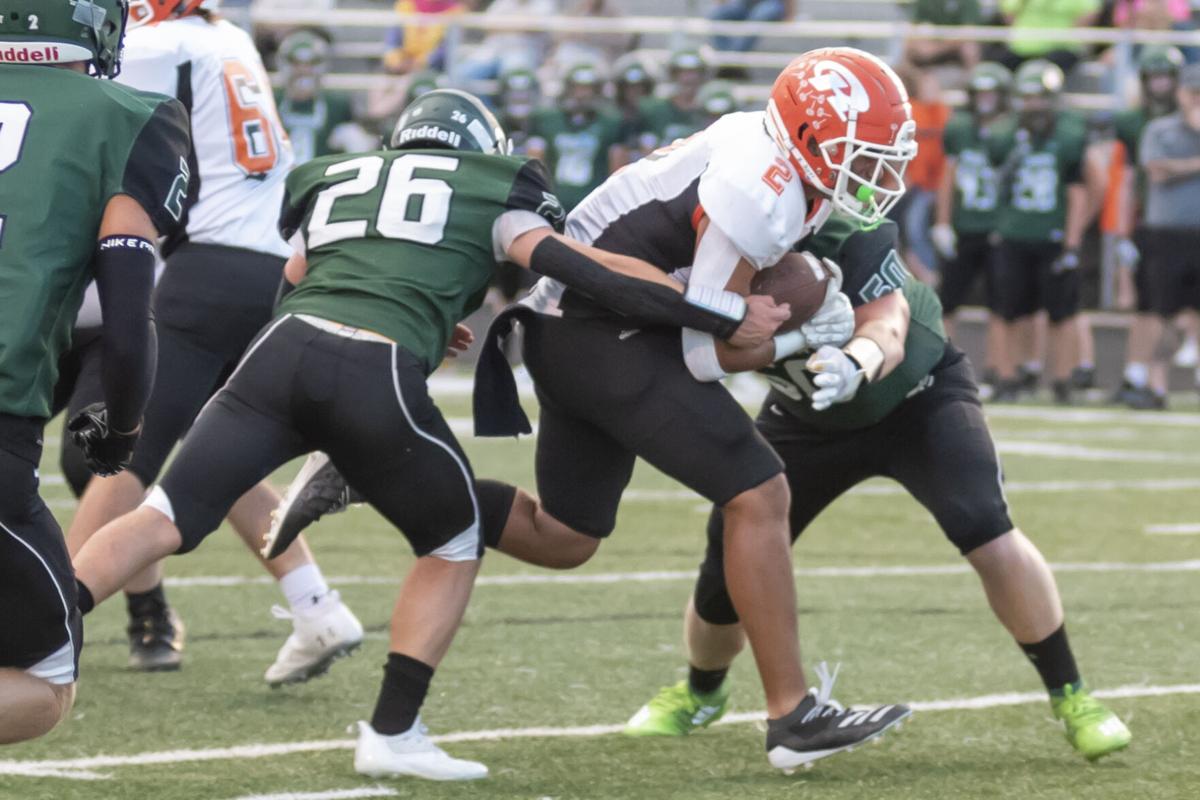 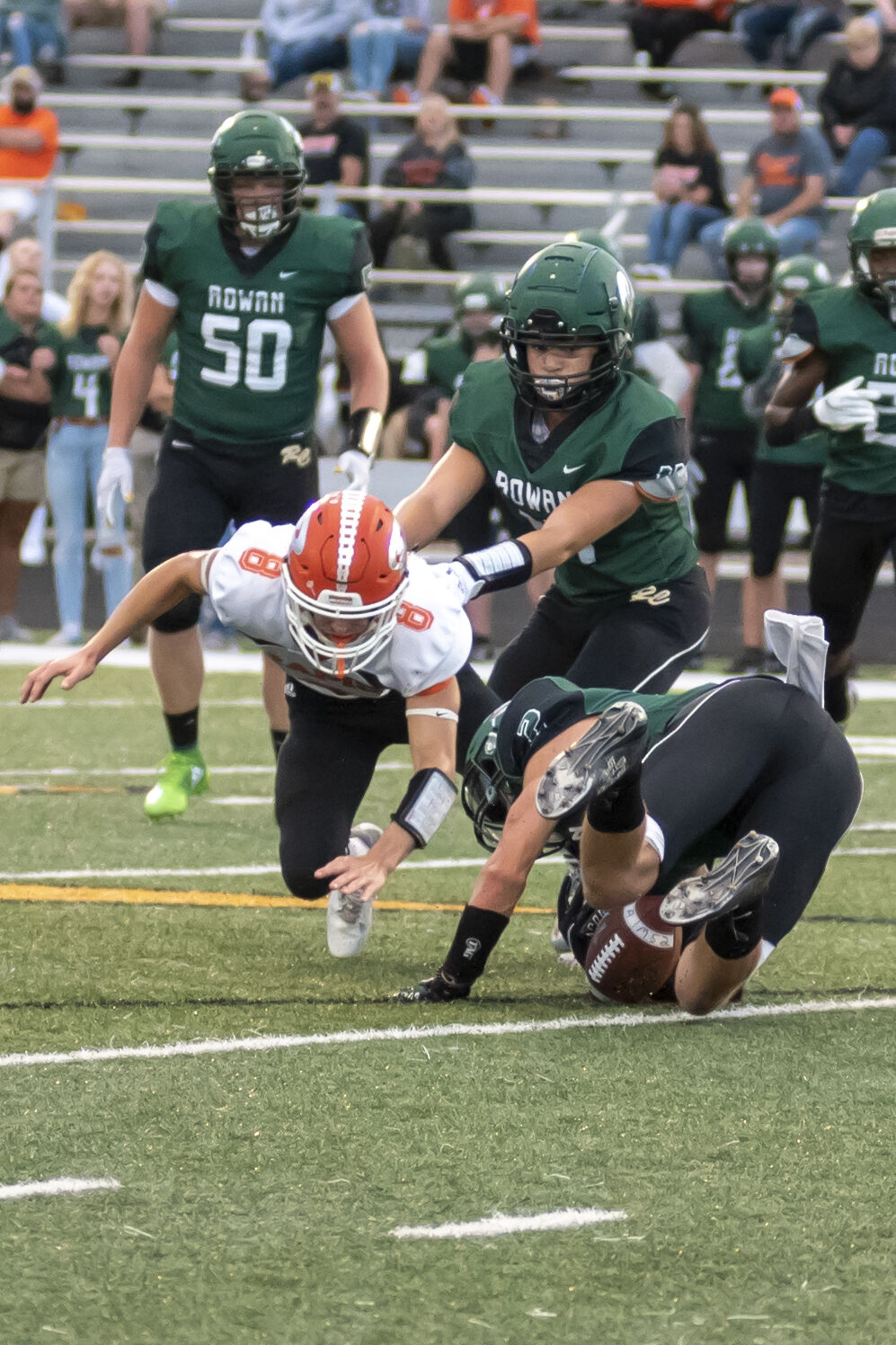 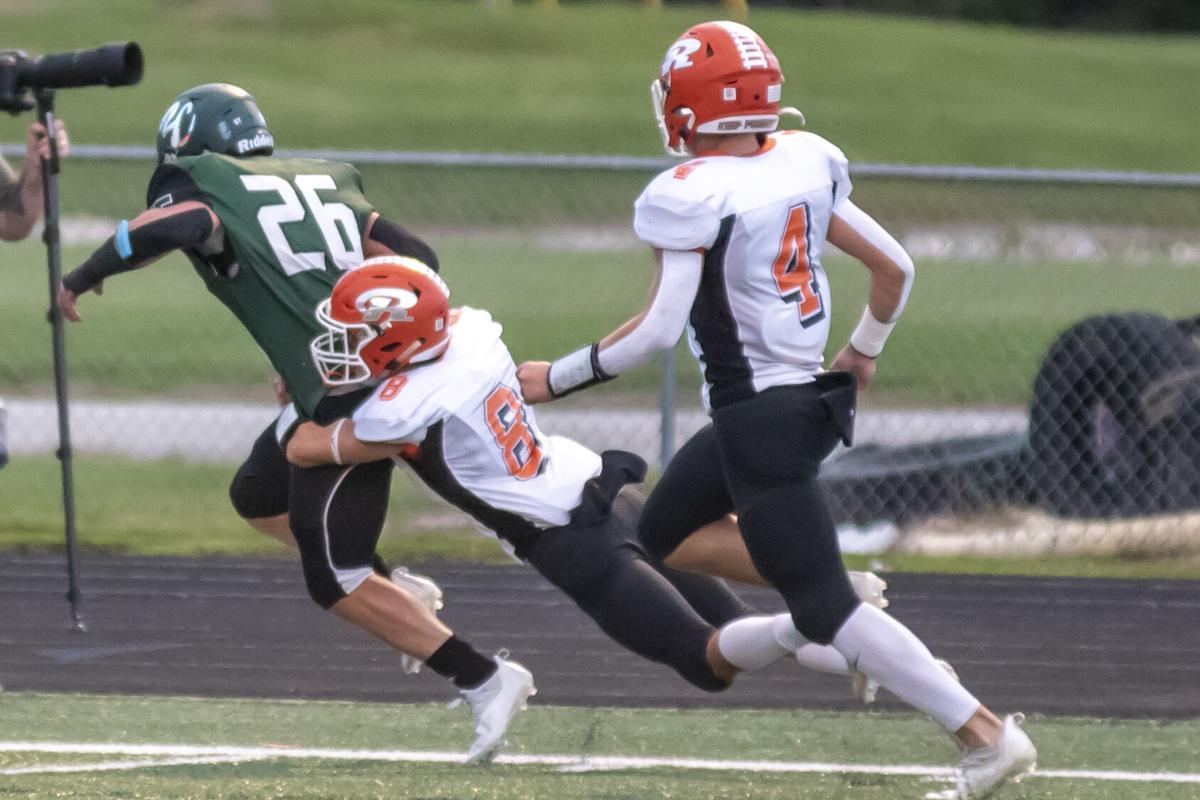 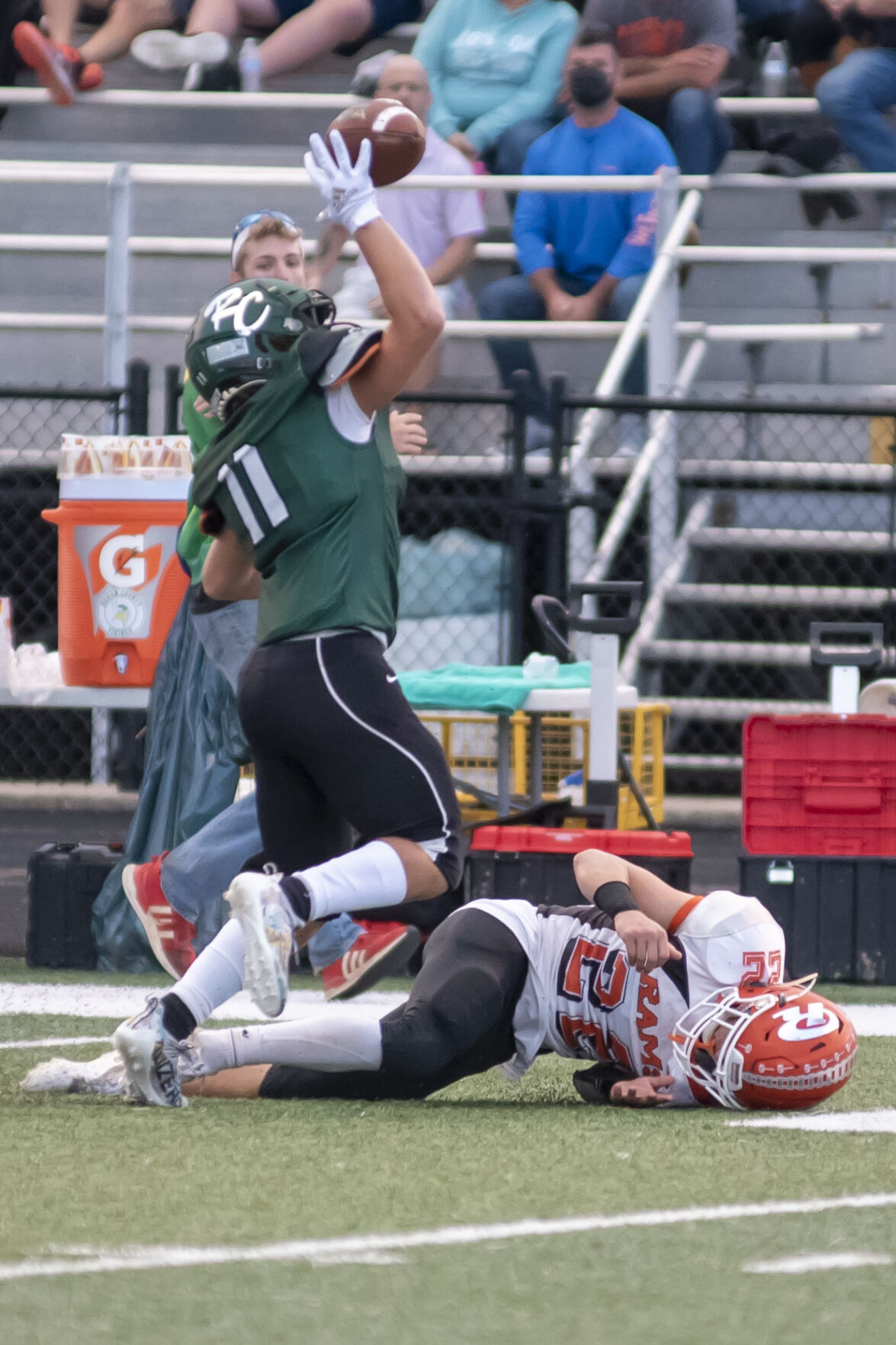 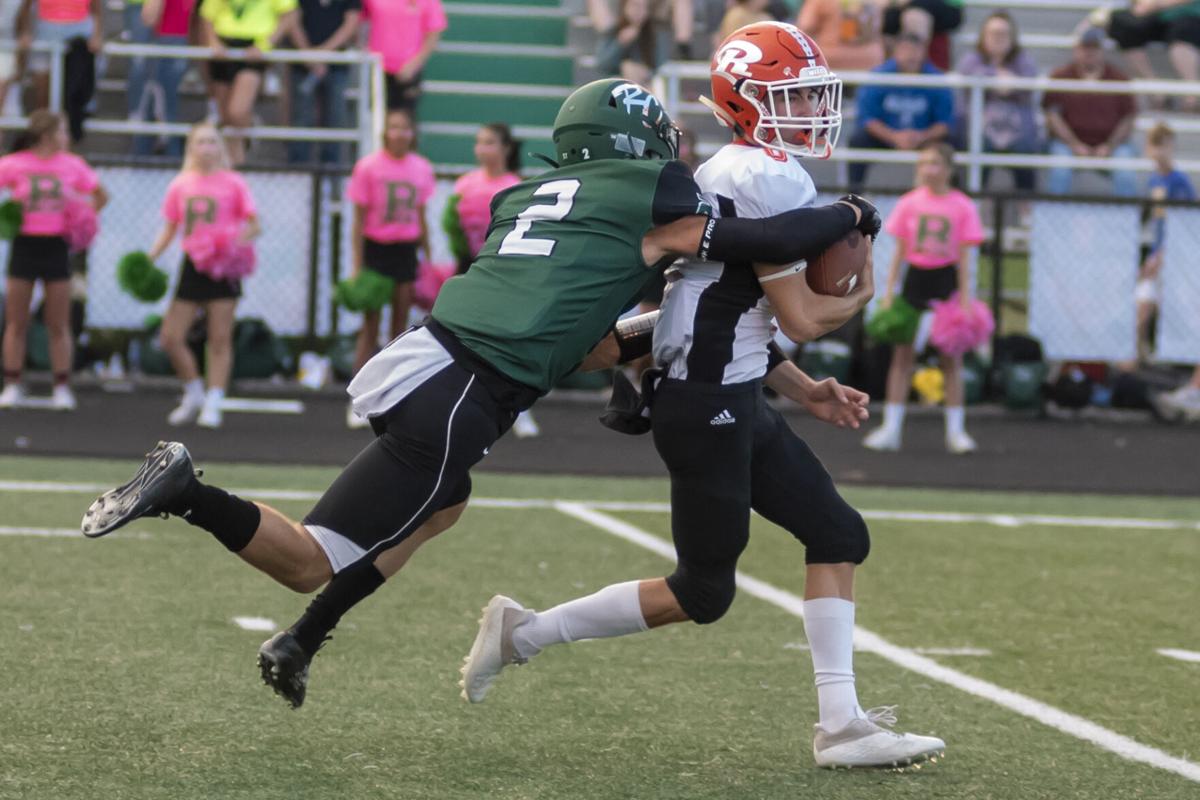 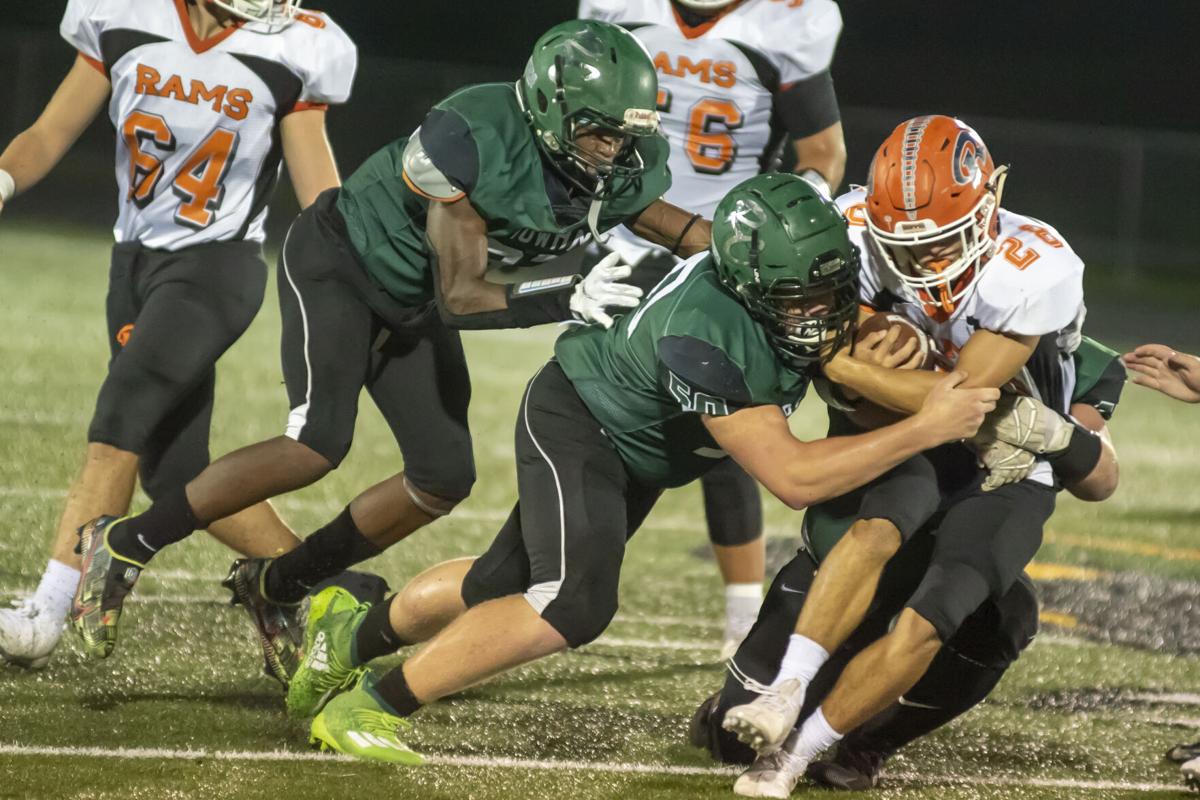 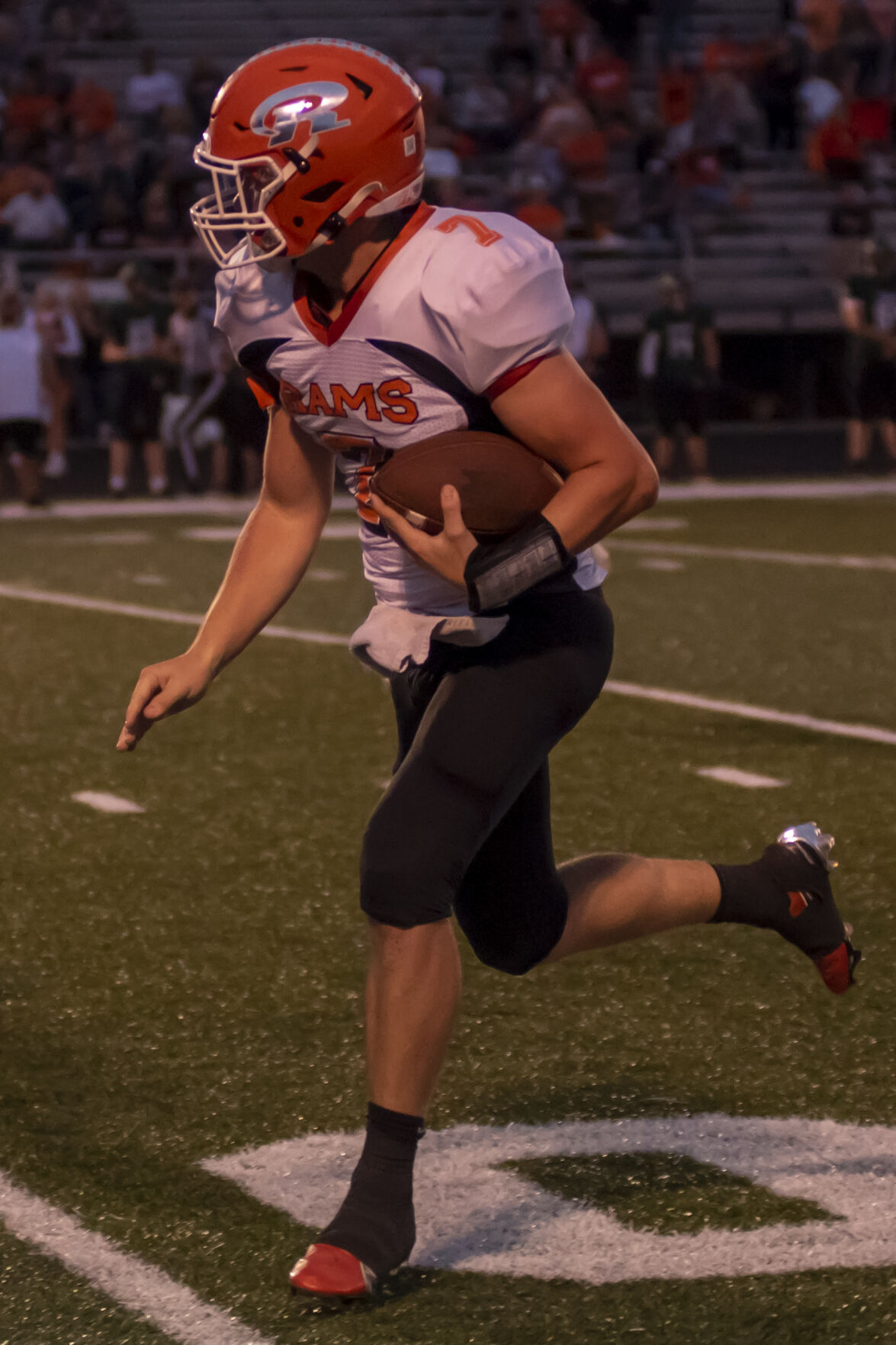 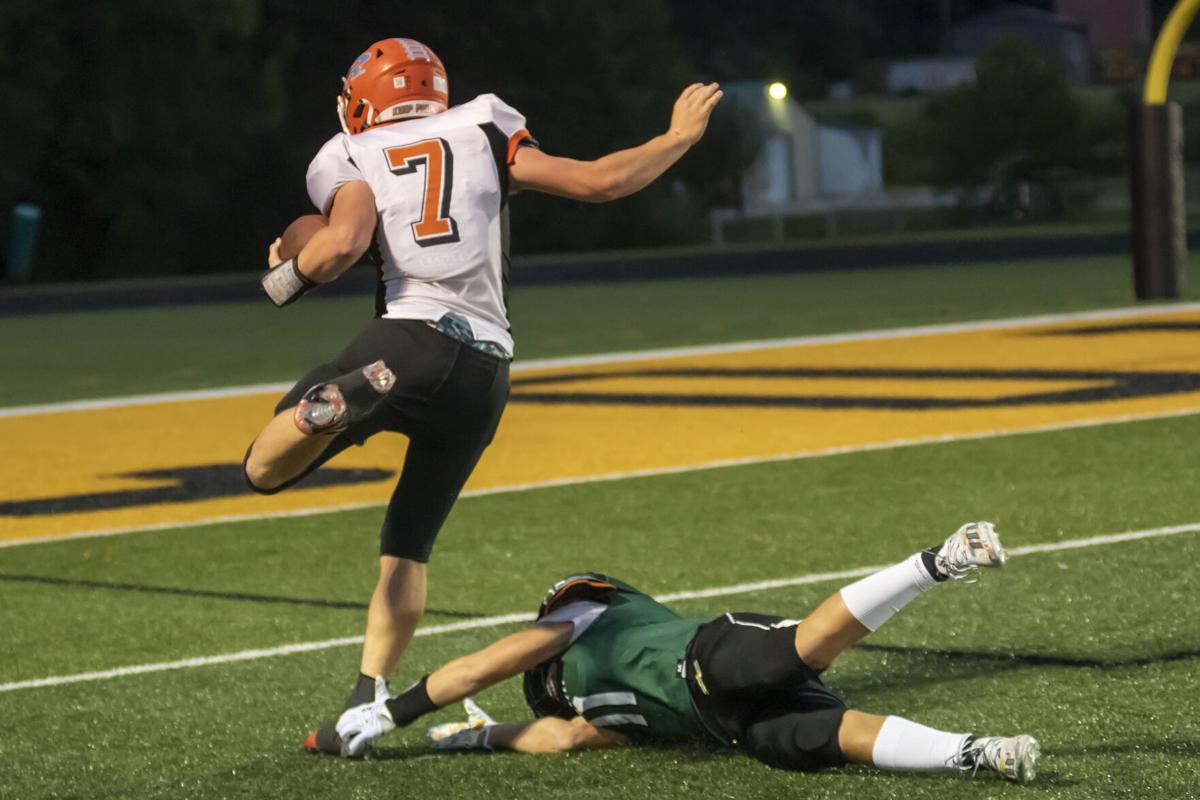 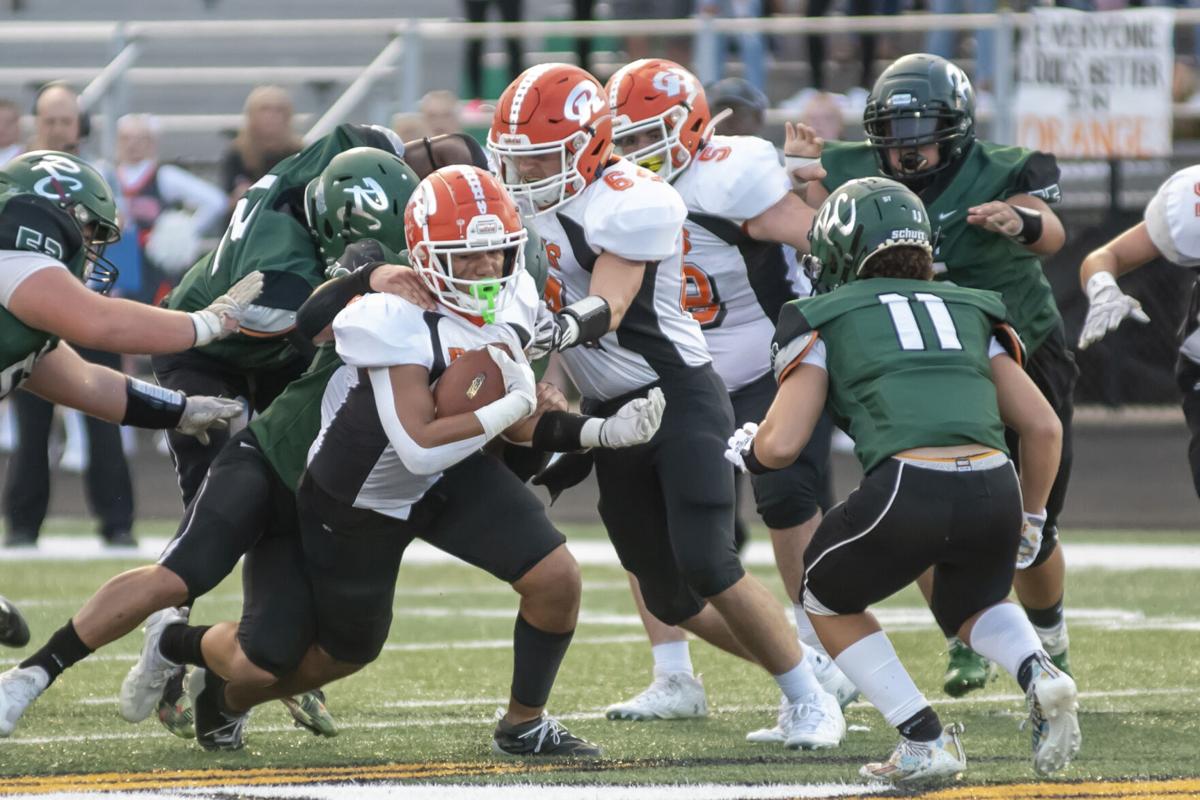 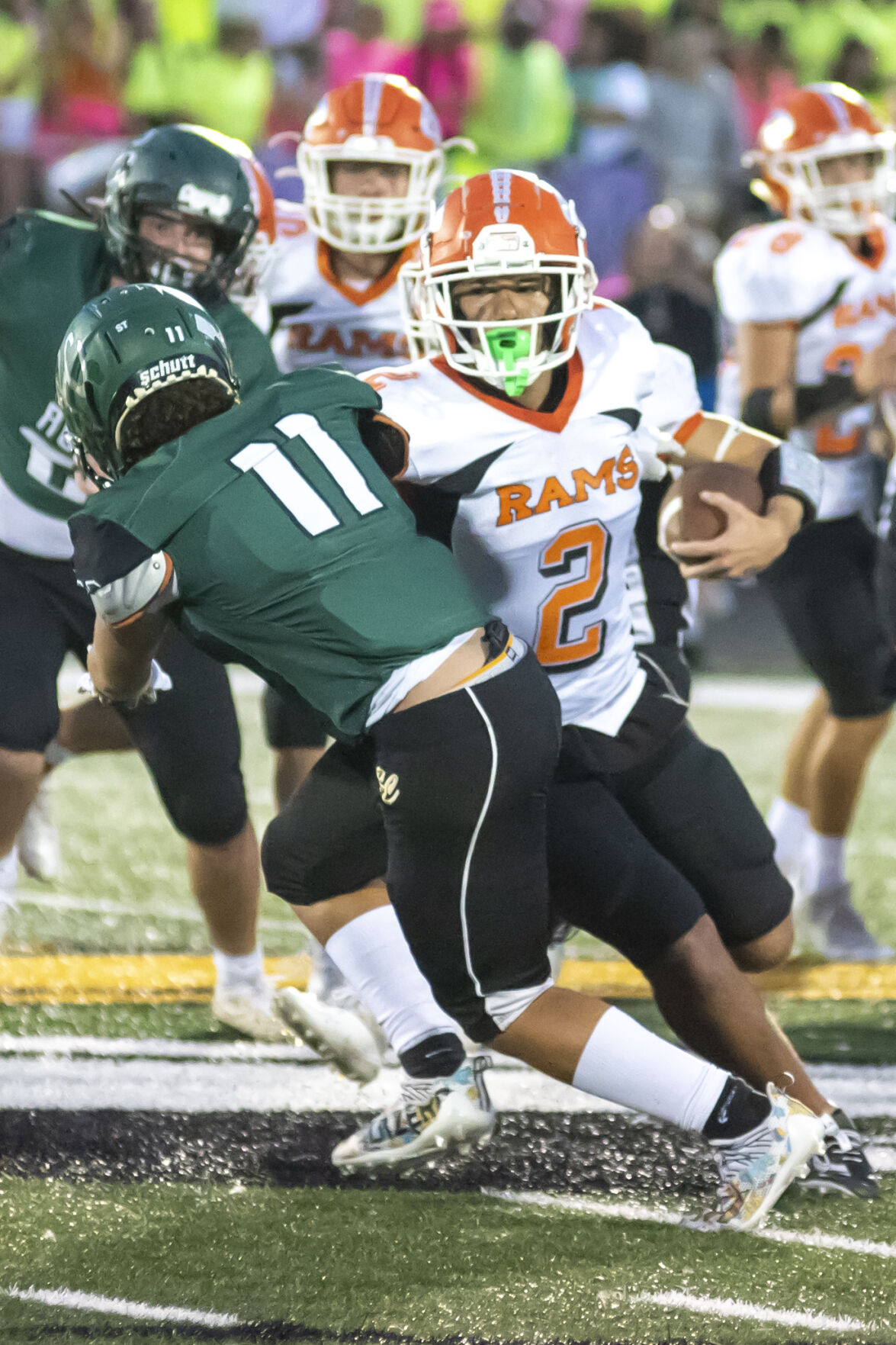 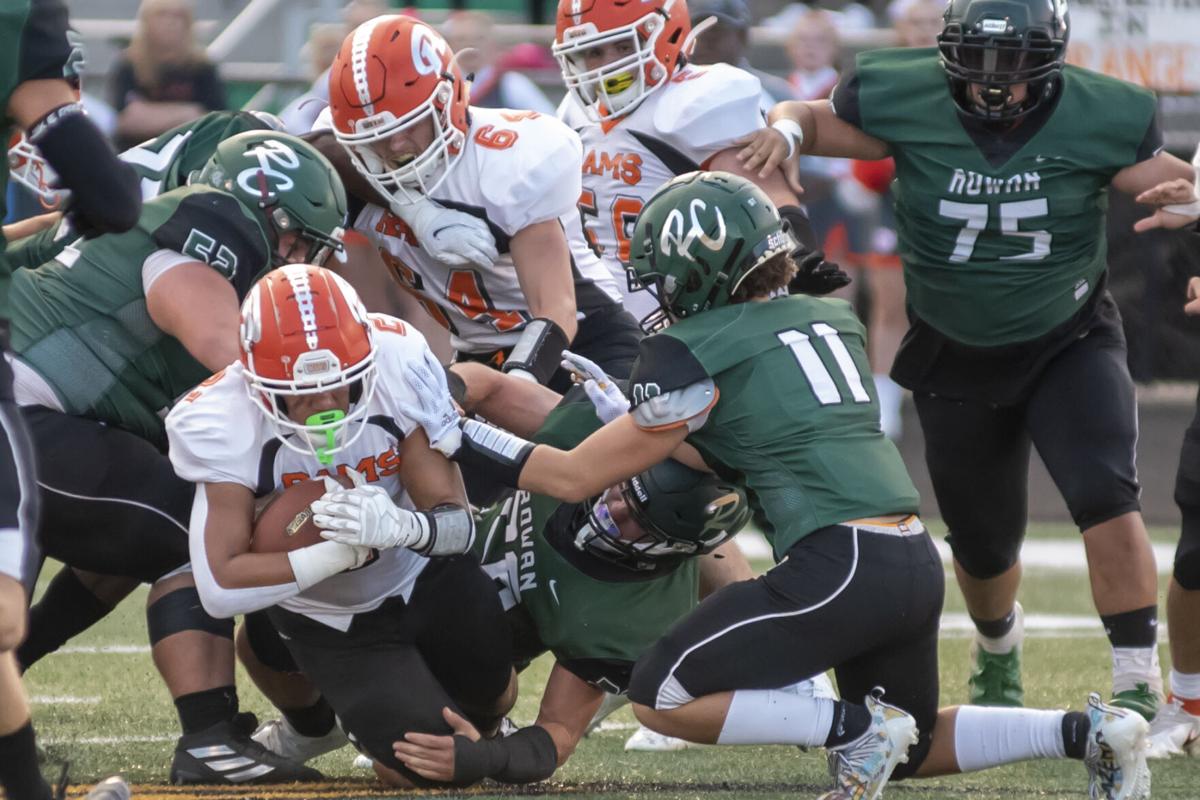 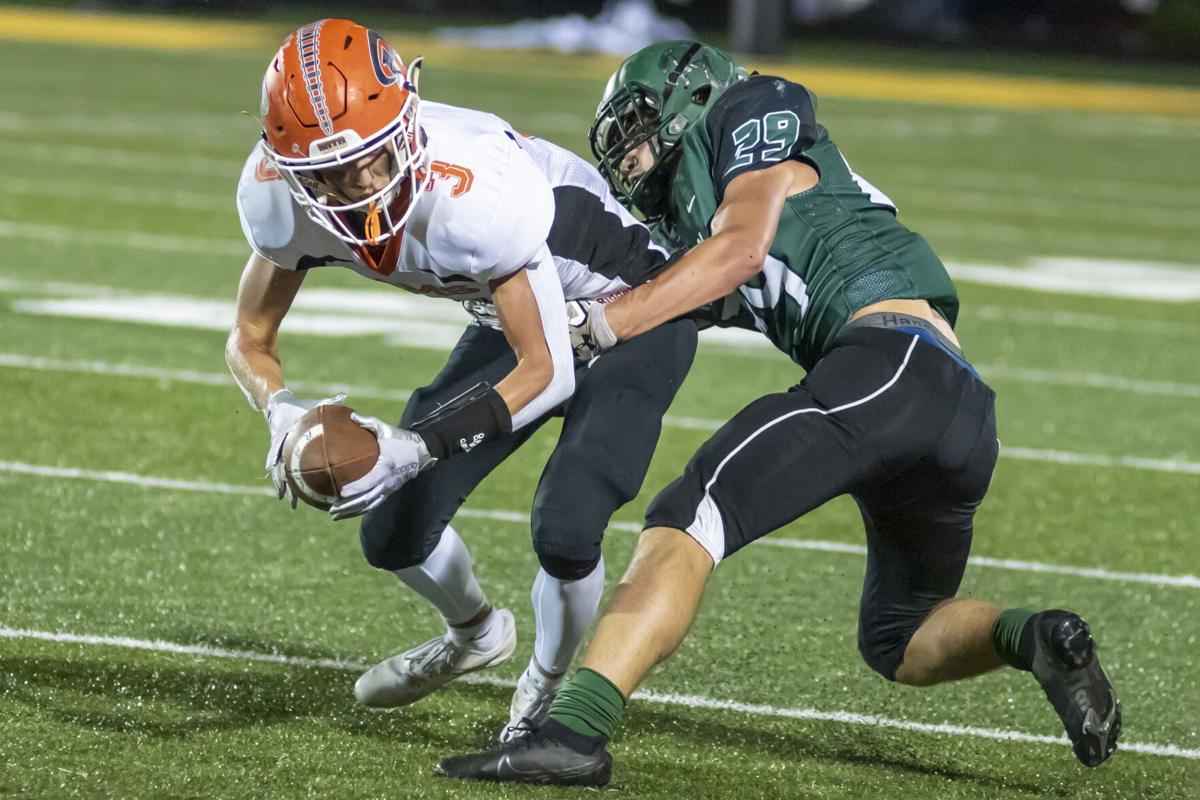 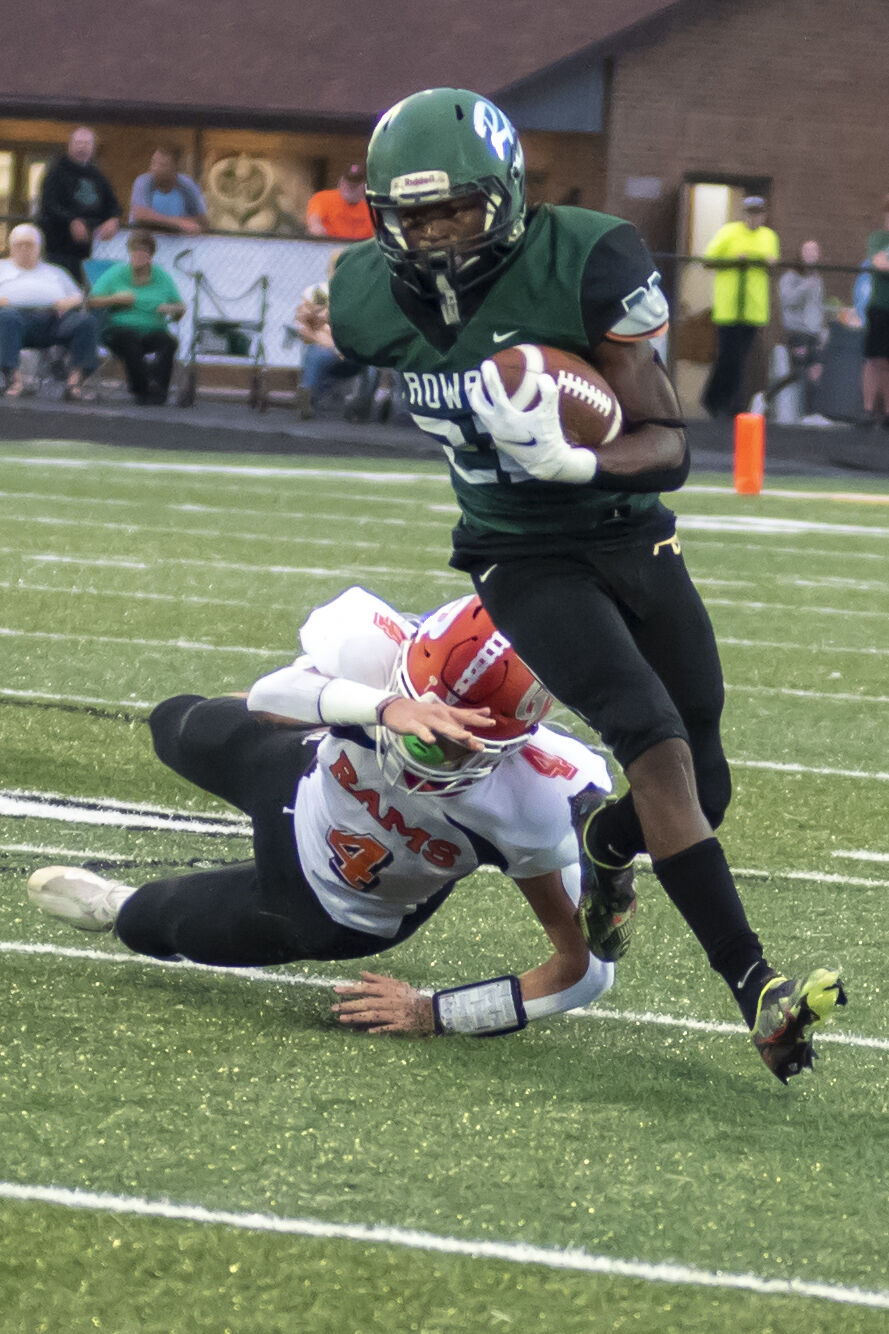 MOREHEAD It was no secret the name Wallace was going to be heard early and often over the loudspeakers when Raceland visited Rowan County Friday night.

It was Raceland’s Noah Wallace versus Rowan County’s Cole Wallace, and it was the Rams’ version of the name who shouldered the load toward a win.

Noah Wallace turned in a season-high 136 yards on 20 carries, including an 8-yard touchdown that gave the Rams a two-score lead midway through the first. What appeared to be a blowout turned into a shootout headed to the locker room before the Rams pulled away for a 50-26 victory at Paul Ousley Field.

Raceland used a pooch kick on the first play of the game to catch Rowan County off-guard and set up a short field. Four plays later, Logan Lundy hit Conner Hughes for a 25-yard touchdown on fourth down to put the Rams up 7-0.

Isaac Browning followed the Wallace score with an 80-yard scamper for his first of two  touchdowns for a 20-0 advantage only 15 seconds into the second stanza.

But the Vikings refused to roll over and go away and Rocky Miller was the man who answered the bell. After Cole Wallace recorded an 89-yard kickoff return to the Raceland 1, Miller dashed in for his first of three scores and ignited a Vikings run to get within 27-20 of Raceland at the break.

“I think we got a little lackadaisical and I got a little too aggressive on the kickoff team and I have to do a better job there,” Rams coach Michael Salmons said. “Ended up in a game that maybe it was a little too easy for us at first, not sure. Maybe we got too comfortable. Credit to our guys, we came out and kept playing. That’s who we are. We kept pounding and I had no doubt we would keep going.”

Raceland answered Miller’s first score when Lundy darted down the visiting sideline, breaking a pair of tackles and slipping another at the 10, for a 42-yard score and a 27-7 lead with 10:08 before the half.

That is when Miller inserted himself into the game in a big way with touchdown runs of 61 and 67 yards, both set up by key blocks by fellow back Cole Wallace near midfield.

“If he gets a little daylight, he has that burst of speed,” Rowan County coach Kelly Ford said of Miller. “He does a lot with track here for us and everybody is keying on Cole. We told him this week, his shot was coming. He did a great job and hopefully that’s the one-two punch that we wanted to do with those two guys. They are two great backs.”

Miller led the Vikings with 136 yards on only four carries, three of them for touchdowns.

“He’s an exceptional athlete and we took some poor angles tonight,” Salmons said of Miller. “At times tonight, we looked very poor at trying to tackle the ballcarrier. Those are things we have to get better at going forward if we want to get where we want to be in November and December.”

Raceland’s defense clamped down on the Rowan County tailback in the second half while taking advantage of short fields on nearly every possession. Although the Rams stalled out of the locker room, Lundy led Raceland down the field on a six-play, 56-yard drive that Browning capped with a 1-yard scoring dive for a 34-20 cushion.

Raceland forced back-to-back three-and-outs on Rowan County’s next two possessions, with the second resulting in a safety after the Rams blocked the punt in the end zone. After the free kick from the Vikings, Noah Wallace needed only one touch to find pay dirt from 34 yards out for his second score.

“We lost the momentum and had to seize it back,” Salmons said. “It took us two possessions to do it. Offense didn’t come out and convert on third down, but we were able to stand up defensively and make a stand and then we were able to convert. After that, I thought we got into a flow again and didn’t give up any explosive plays.”

Ford said the immediate score after the safety was the final shot across the bow.

“A big play like that, it just takes it out of you,” Ford said. “It’s just things that happen in a football game. You try to play through them and even at that point, my kids didn’t lay down. That was probably the play that put the game away for them.”

Raceland’s 334 rushing yards were 18 more than the Rams had amassed in their previous two contests, a testament against a defense that Salmons said made no secret of what it was trying to take away.

“We tried to get a little better with our timing in the pass game and the run game,” Salmons said. “Rowan was really aggressive against our run and it really slowed us down. We were able to hit a couple big plays there in the run game, but by and large, they were really focusing on controlling the line of scrimmage on us.”

Salmons also liked the progression he saw from Lundy, who stood tall in the face of several blitzes to deliver a ball downfield just before taking a punishing hit.

“They were playing seven men in the box against all our formations, no matter how many running backs we had,” Salmons said. “Proud of Logan. He really grew up in there tonight and took some big shots. He took a couple chin shots I know of. That’s things we have to get better at, to shore up our protection. I know he ran the ball a bit more aggressively tonight.”

Lundy finished 14 of 27 through the air with a pair of touchdowns, both to Conner Hughes, who caught six balls for a game-high 89 yards.

“Offensively, we just couldn’t get things going,” Ford said. “We put ourselves in bad spots with mistakes on the field that put us behind the sticks and special-teams wise, our punt game has to get better. We have to get our quarterback play better. A lot of snaps put us behind the chains and you just can’t have that against a good football team.”

However, Ford was proud of the resolve his squad showed after falling behind three scores.

“That’s something we hang our hat on,” he said. “At West Carter, we went down late and had to come back to win it. One thing we are trying to work on with our kids is unity and our kids battled. They could’ve easily laid down and could’ve easily hung their heads, but they came back and got us to within a touchdown before the half and gave us a shot.”