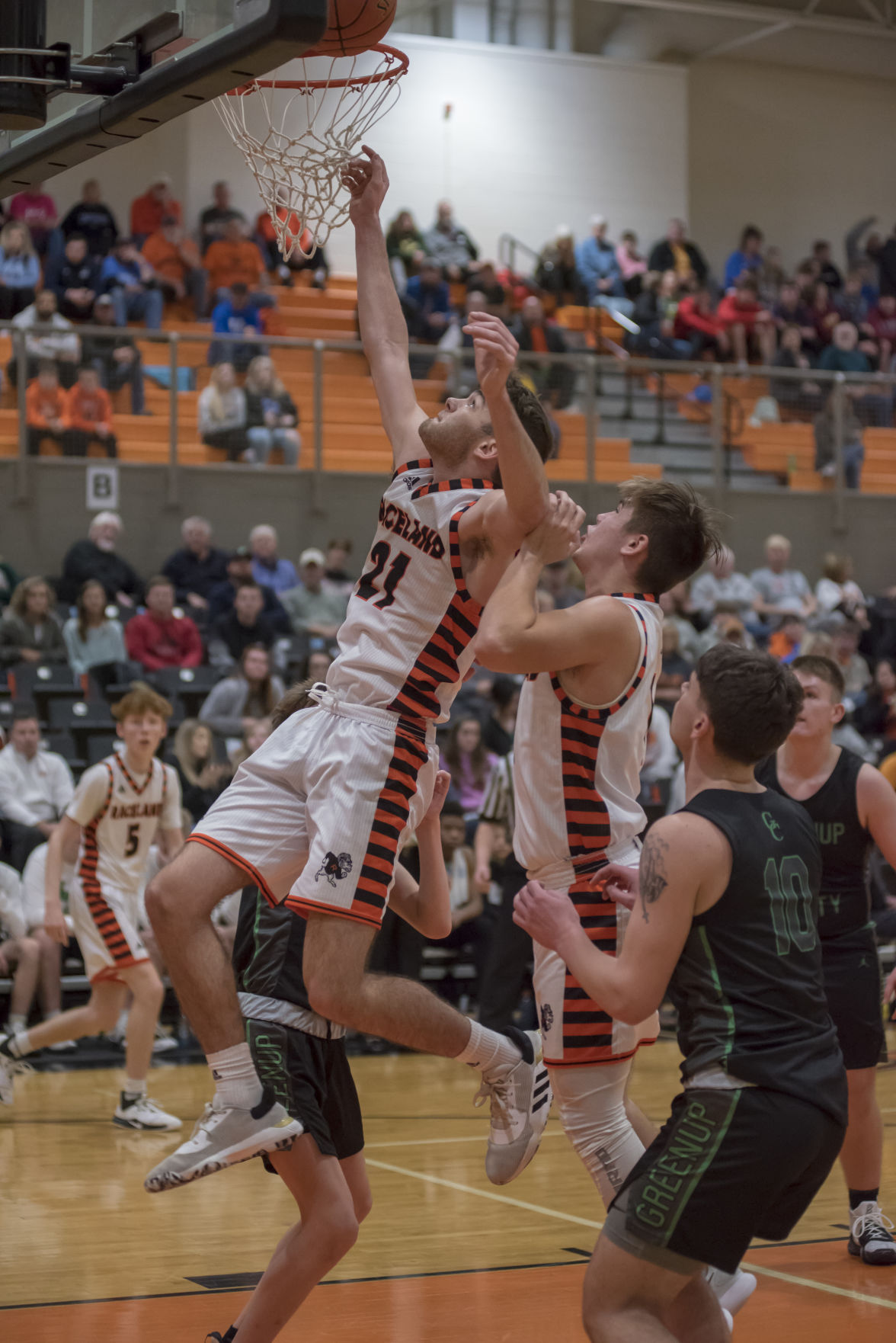 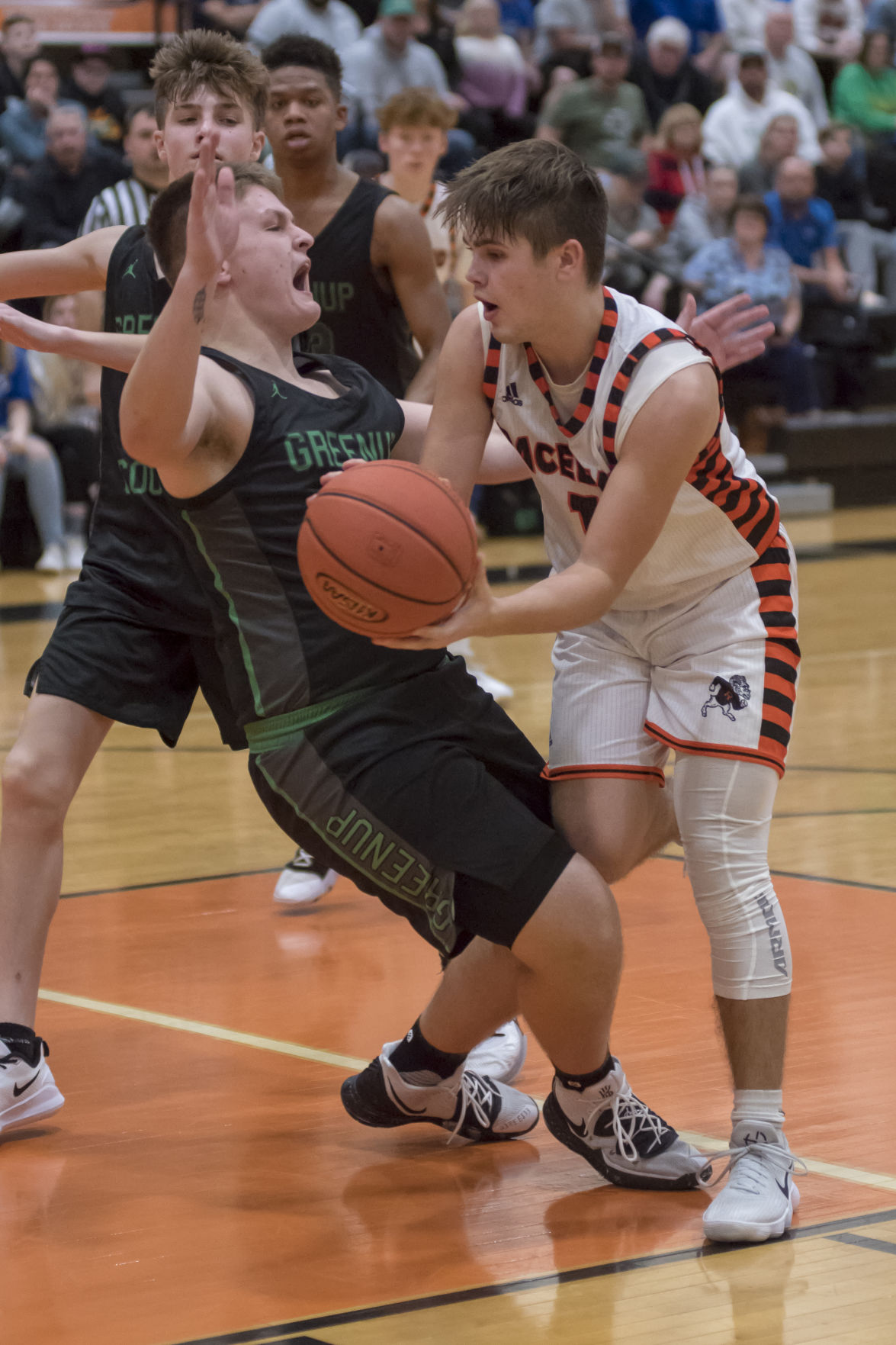 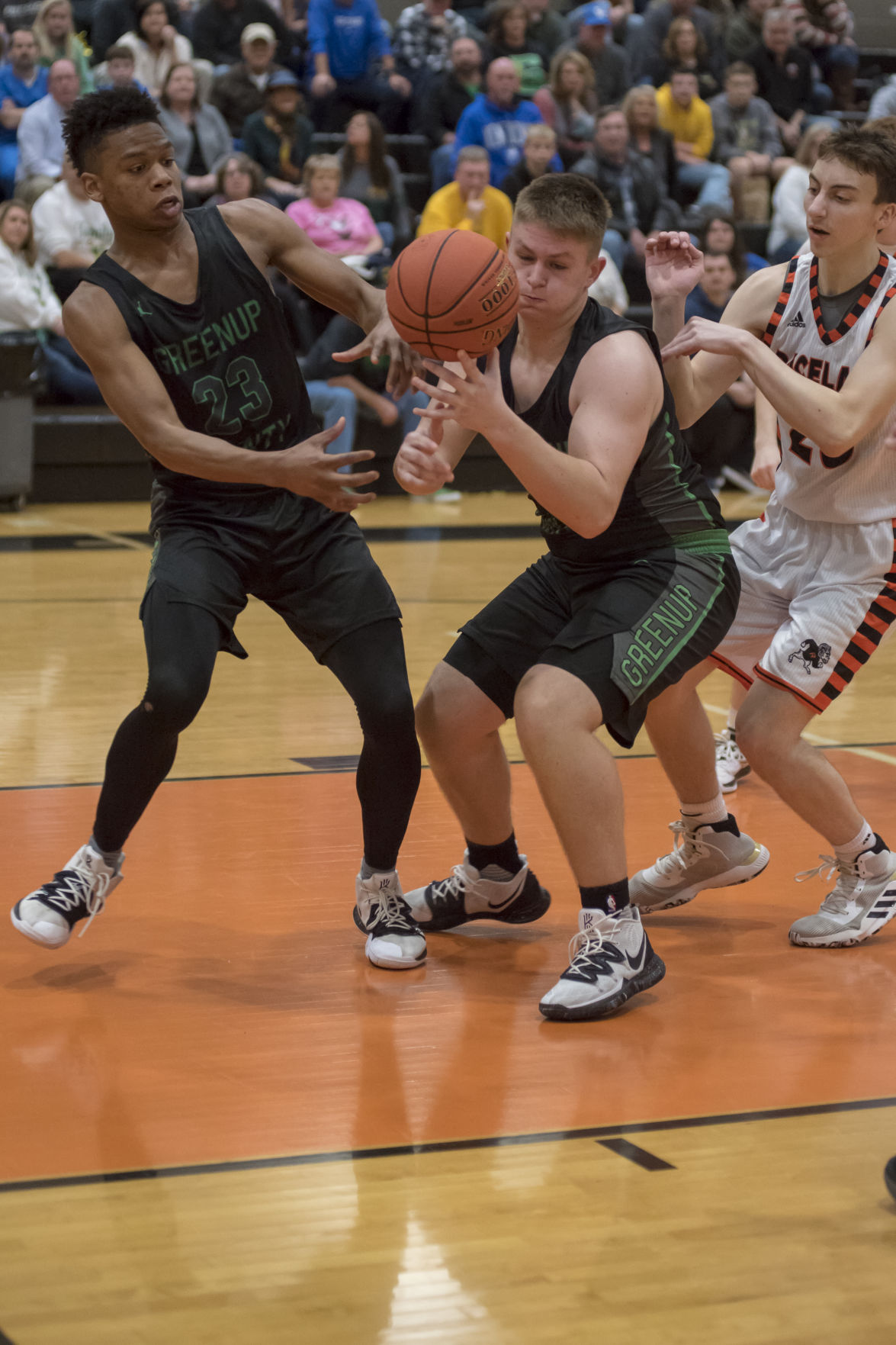 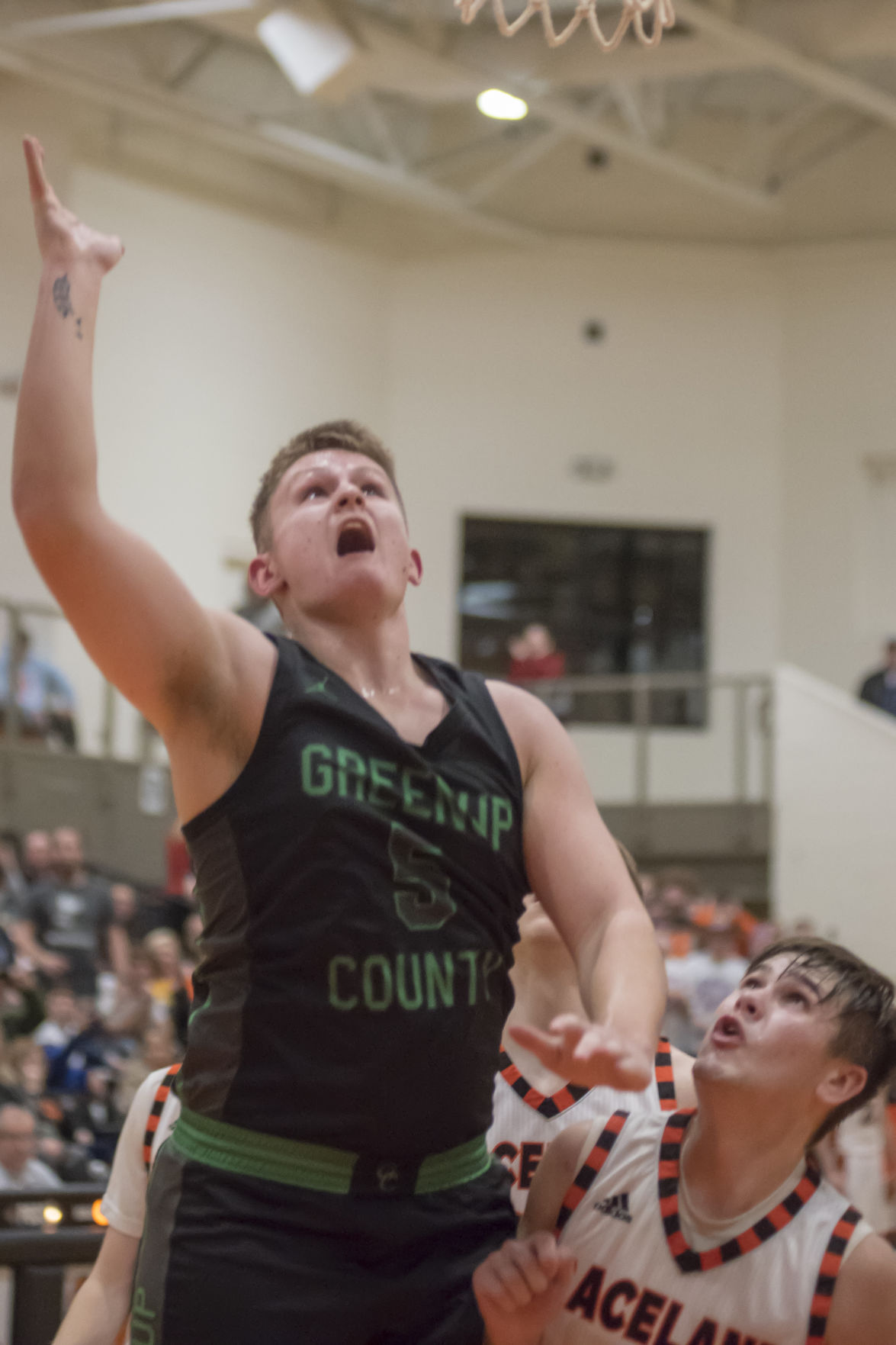 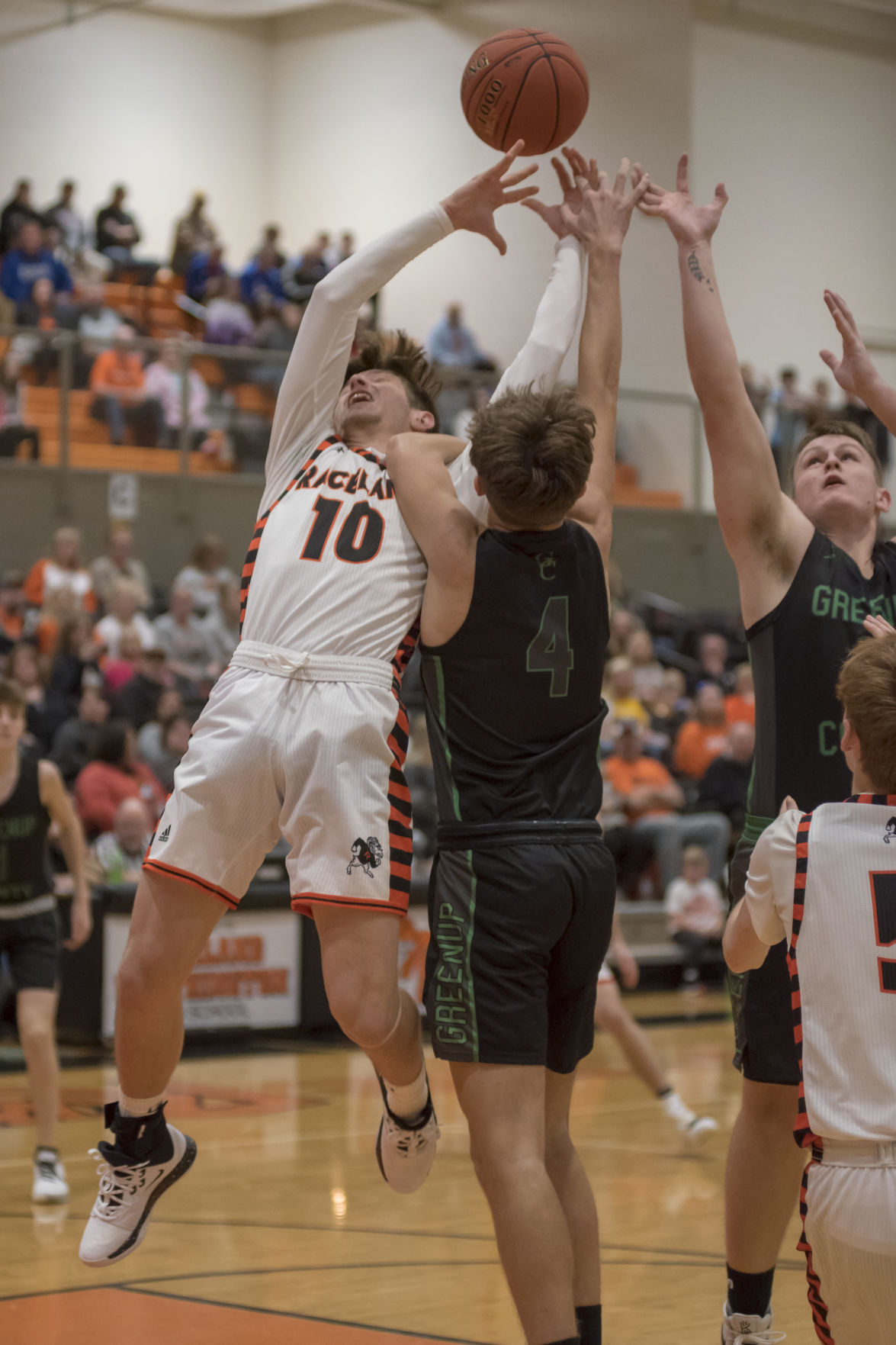 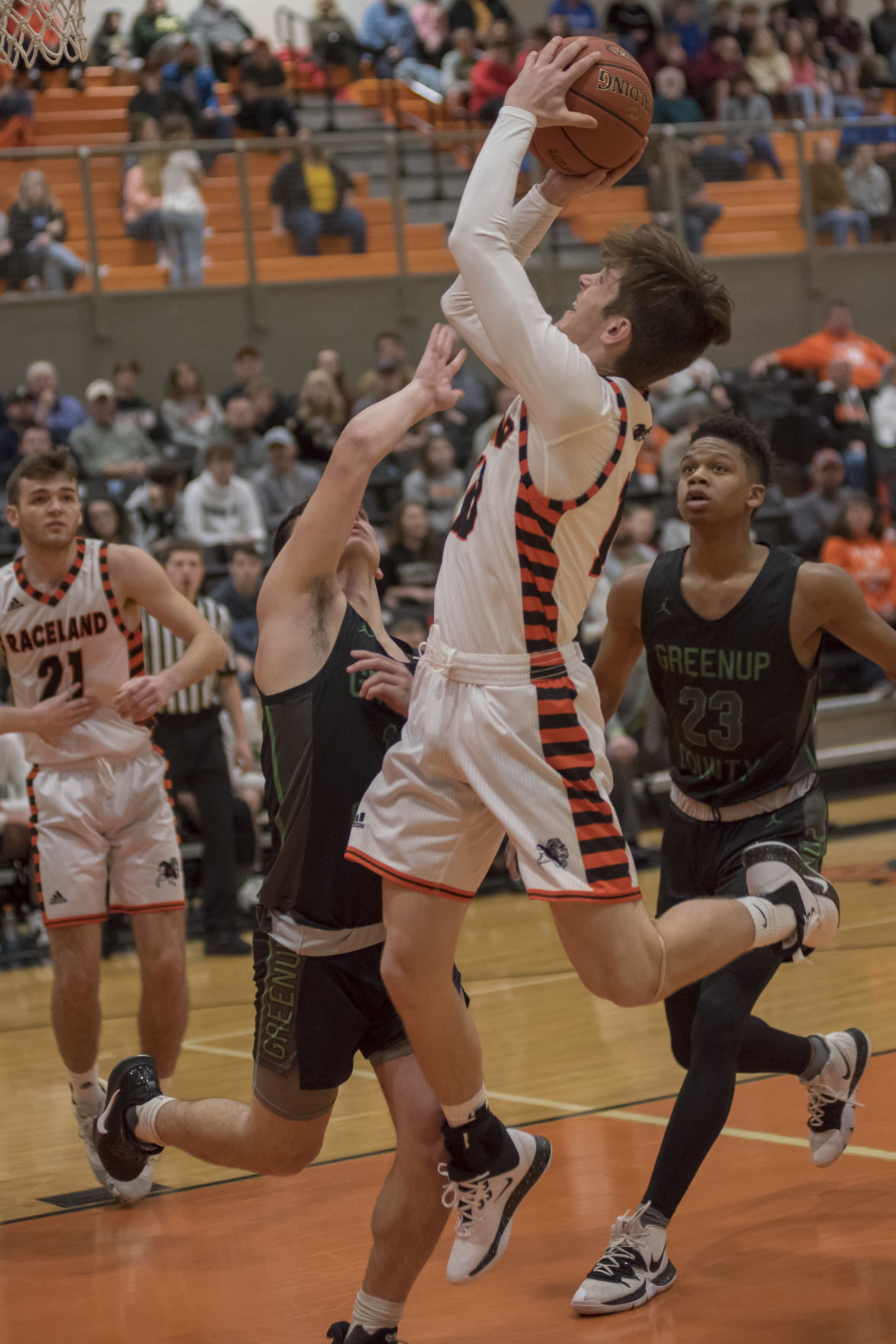 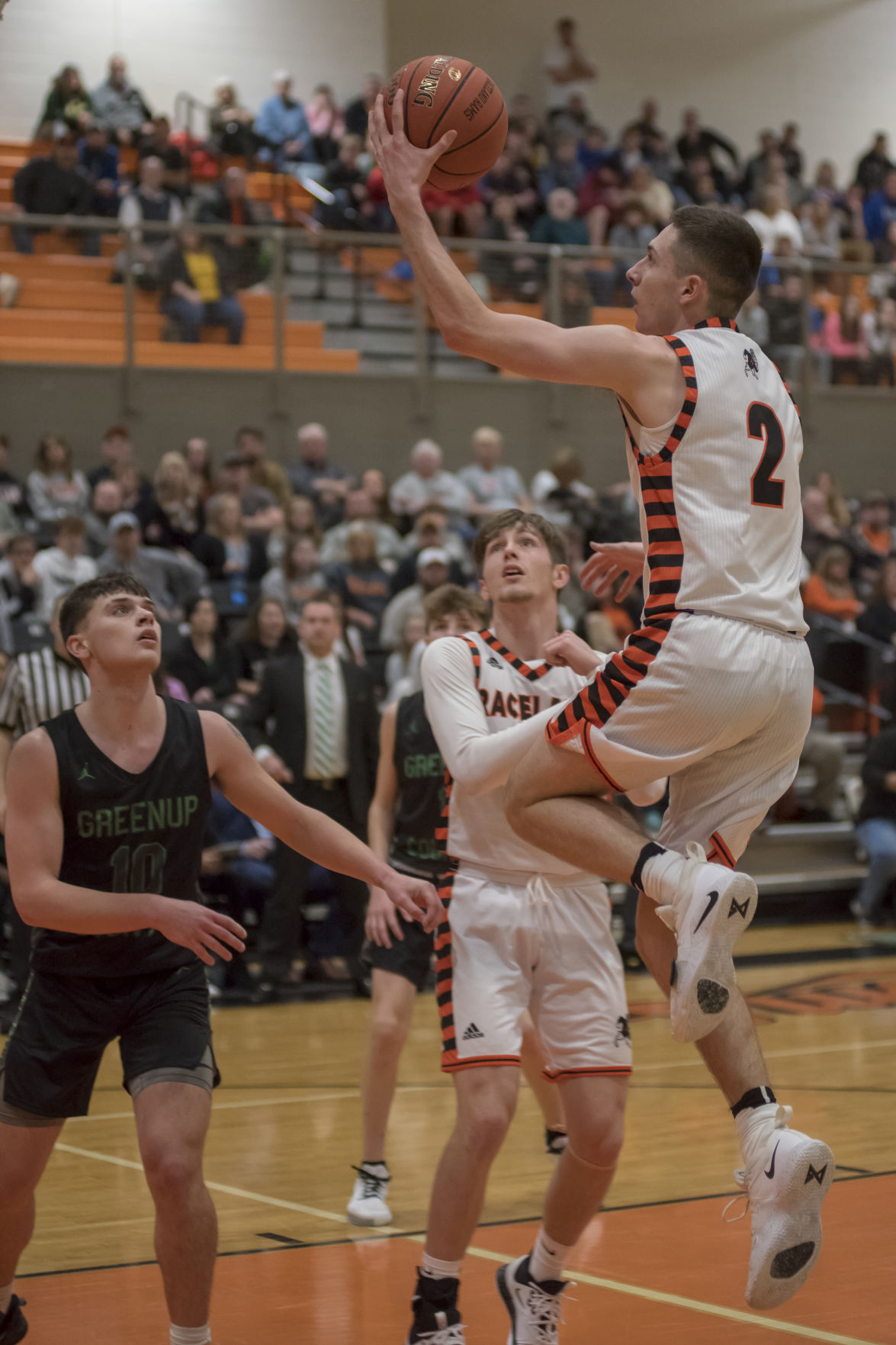 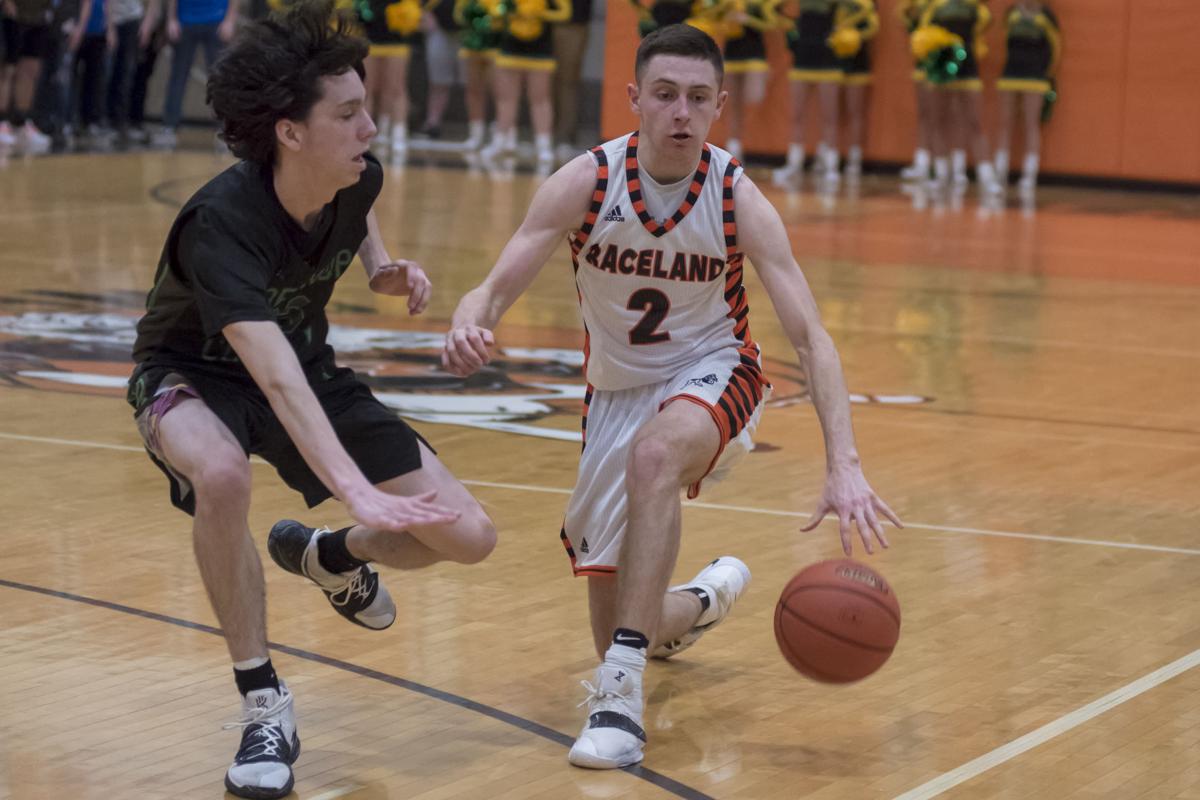 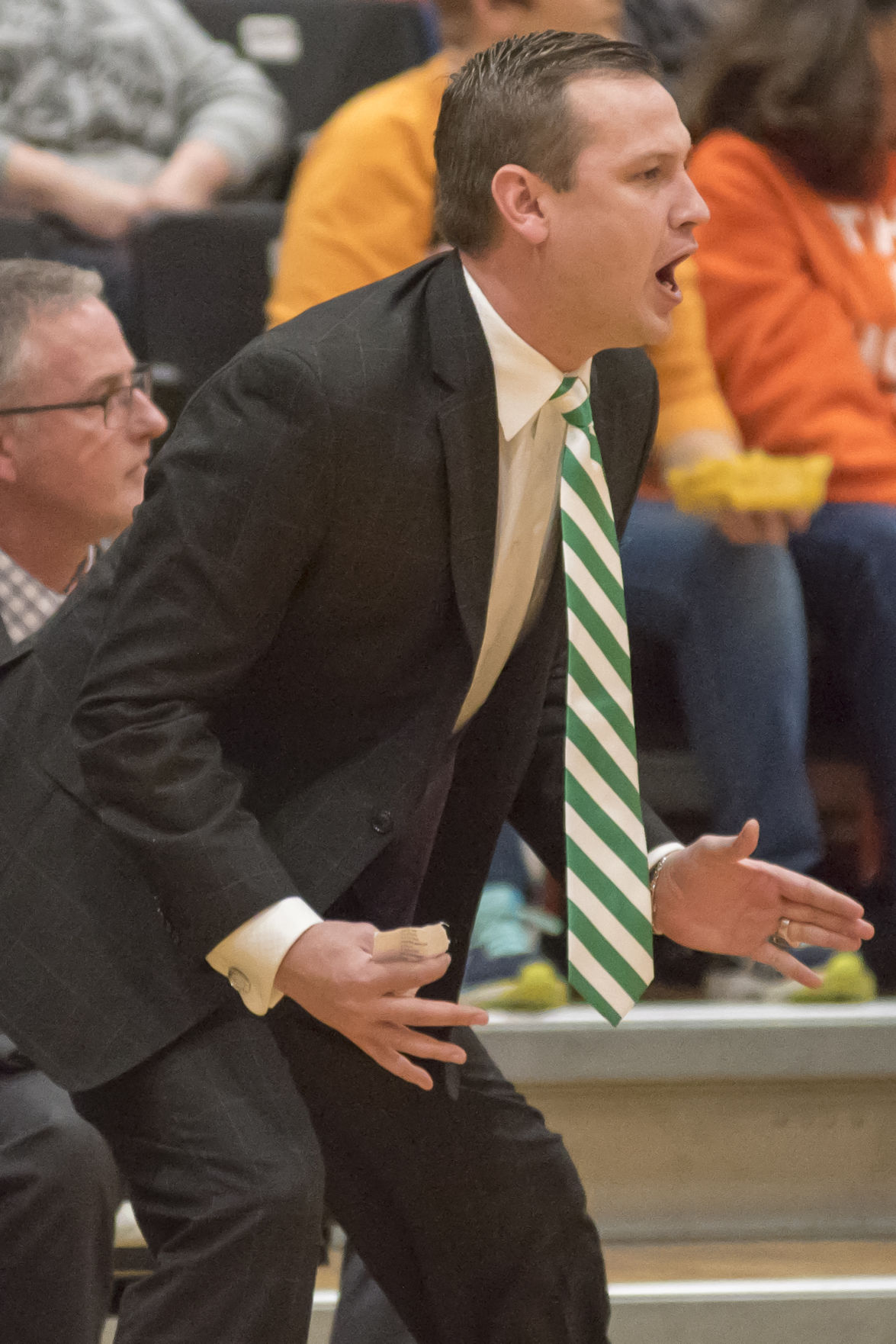 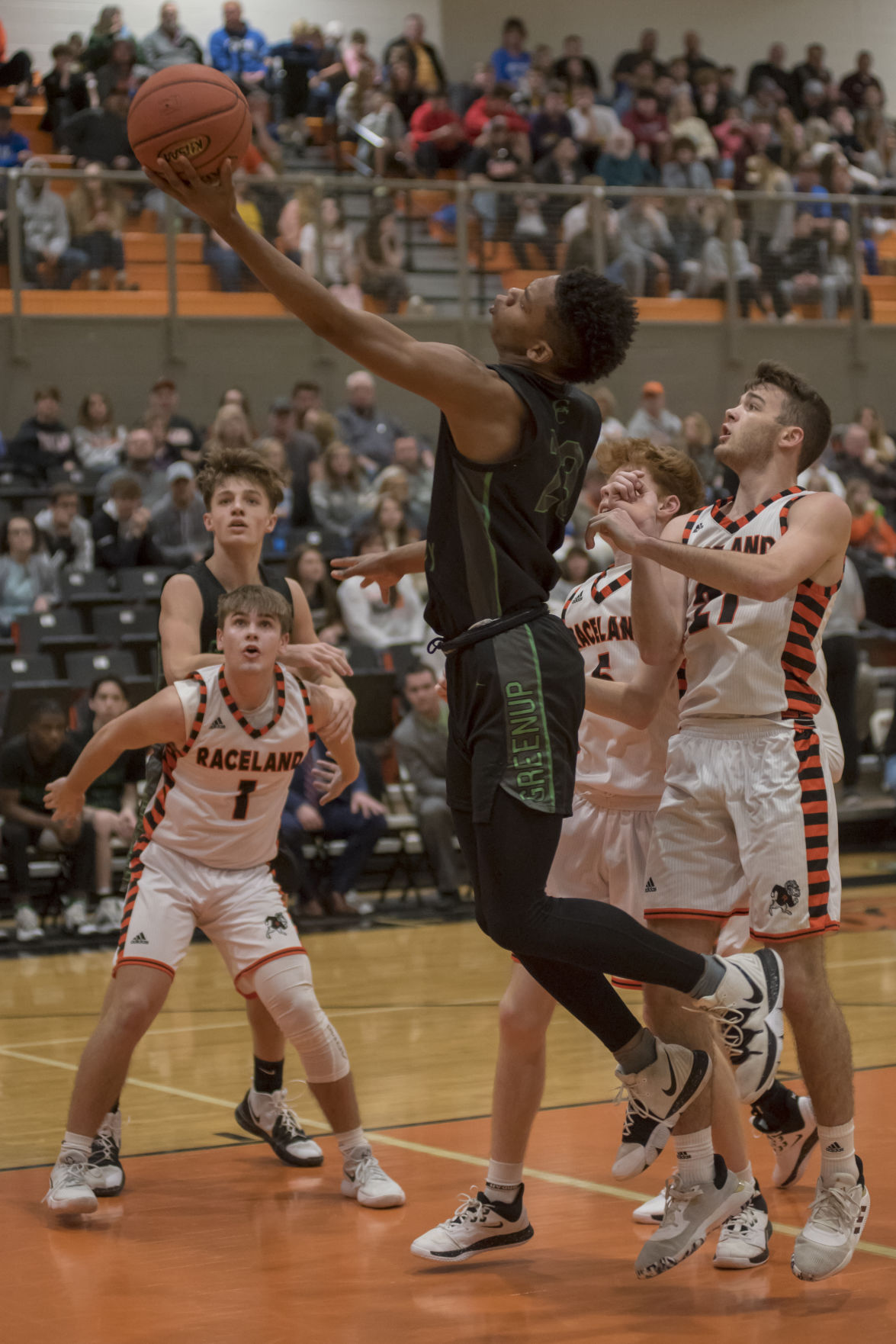 RACELAND Raceland coach Bob Trimble will probably be skipping the gym after last night’s thrill at the Palace.

“I was looking for our principal, Tom Collins, to let him know I needed a sub for tomorrow, but I forgot we were out of school,” Trimble laughed. “I’m drained and I didn’t play a second.”

Thirty-two minutes were not even close to enough to decide the outcome of a classic Raceland-Greenup County rivalry game. In fact, it took every second of the 44 minutes played in a triple-overtime thriller for the Rams to secure a 75-73 win over the Musketeers.

“Both benches were depleted and worn out, but give Greenup credit, their young guys came in there and made some plays down the stretch when they had both their big guys out,” Trimble said. “We just made enough to get the job done. 63rd District basketball, every time you go out it’s going to be a war. You better be ready to play.”

Kirk Pence led the Rams with 27 points, 21 coming in the second half and overtime periods in his first game since missing last week with the flu.

“Down the stretch, I’ve got to make certain to get him the ball,” Trimble said. “Kirk is good about getting into the paint and he’s got some size in the paint. He’s money at the free throw line.”

Pence also delivered what turned out to be the game-winning assist to Gavin Reed after the defense collapsed on the junior on his drive to the basket.

“Gavin Reed came in and gave us some big minutes, hit a couple putbacks, grabbed some rebounds and a couple free throws late,” Trimble said.

Each team had looks at the basket for the win at the end of regulation and overtime periods, but neither could get the winning shot to fall. Down 75-73 after the Reed bucket, Greenup County’s Zander Carter launched a triple for the win from the left wing through heavy contact. However, the ball did not fall, and the Rams survived for the victory.

“He’s got the confidence to take that shot and I have full confidence in him,” Greenup County coach Robert Amis said of the eighth-grader. “He handled the ball and had older guys trying to trap him and he had a semi-Harlem Globetrotter routine going on out there.”

Carter had three opportunities for the tie in the final overtime period but could not get the shot to fall.

“Even though a couple of Zander’s shots didn't go in, he’s playing,” Amis said. “He’s a 13-year old kid and he competed and he’s going to be battle-tested.”

The many fireworks that happened in the final minutes nearly overshadowed those that happened in the opening minutes after Austin Cumpton and Rod Dryden came nose-to-nose. Cumpton was going for a dunk after a turnover and Dryden delivered a foul. What followed led to a double technical foul which hampered both teams mightily in the contest. For Dryden, it was his second personal foul, sending him to the bench to watch the remainder of the half. For both, the T created an additional foul that sent both to the bench with five, fouling out late in the contest to join Brady Nelson and Floyd, who fouled out as well.

Nelson narrowly missed a triple-double, finishing with 21 points, eight rebounds and eight assists before exiting the game with 35 seconds to play in regulation.

“The Nelson kid is a terrific player,” Trimble said. “He can score it a lot of ways and when he’s hitting 3s, he’s a really tough matchup. He’s a great offensive rebounder, too.”

Most of those assists landed in the hands of Griffin Keeton, who dropped a career-high 22 points on 11 of 13 shooting.

“He played phenomenal tonight,” Amis said of Keeton. “Even defensively he was huge. He took a couple charges for us and even though those don't show up on a stat sheet, those are the intangibles that help you win. We had opportunities to win in three overtimes and they did too, and they prevailed. We don't have Grif tonight, we get blown out of here.”

Neither team led by more the six the entire way. Kyle Broughton drained a long two at the horn to end the first to knot the game at 10-10. Raceland took a 23-22 led to the locker room after Nelson’s triple put the deficit to only one.

With Dryden back on the court, Greenup County (8-3, 1-1) produced its best quarter of the night, 22, and a three-point lead heading to the fourth. Dryden’s triple from the deep left wing tied the game at 55 with 1:03 to play in regulation.

Dryden had 13 points, 10 rebounds and six blocks, all in the second half.

Raceland (9-2, 1-1) countered on the glass with a 12-rebound night by Gunnur Lewis, who also kicked in eight points.

“He’s just got so much toughness,” Trimble said. “Two guys had ahold of the ball there late and he just stepped in and ripped it out. He’s not the biggest guy, but man, he’s tough.”

Raceland outrebounded Greenup County 41-36 but held a massive 18-7 advantage at the break. However, Amis was quick to point to one place on the stat sheet that would have changed the outcome of the event.

“We were 11 of 22 from the line and that’s terrible,” he said. “We’ve been shooting in the high 70 percent and if we hit our free throws, we win this game in regulation. It's the little things. We scouted them and had three days to prepare and just didn't execute the scouting report.”

Trimble was simply happy to get the Rams’ first district win of the season.

“Just happy to get the win,” he said. “Very easily could have lost that game.”

Raceland runs its winning streak to seven games over Greenup County, whose last win over the Rams came on Feb. 20, 2017 in the opening round of the district tournament.

The two will reconvene at the Greenhouse on Feb. 6.