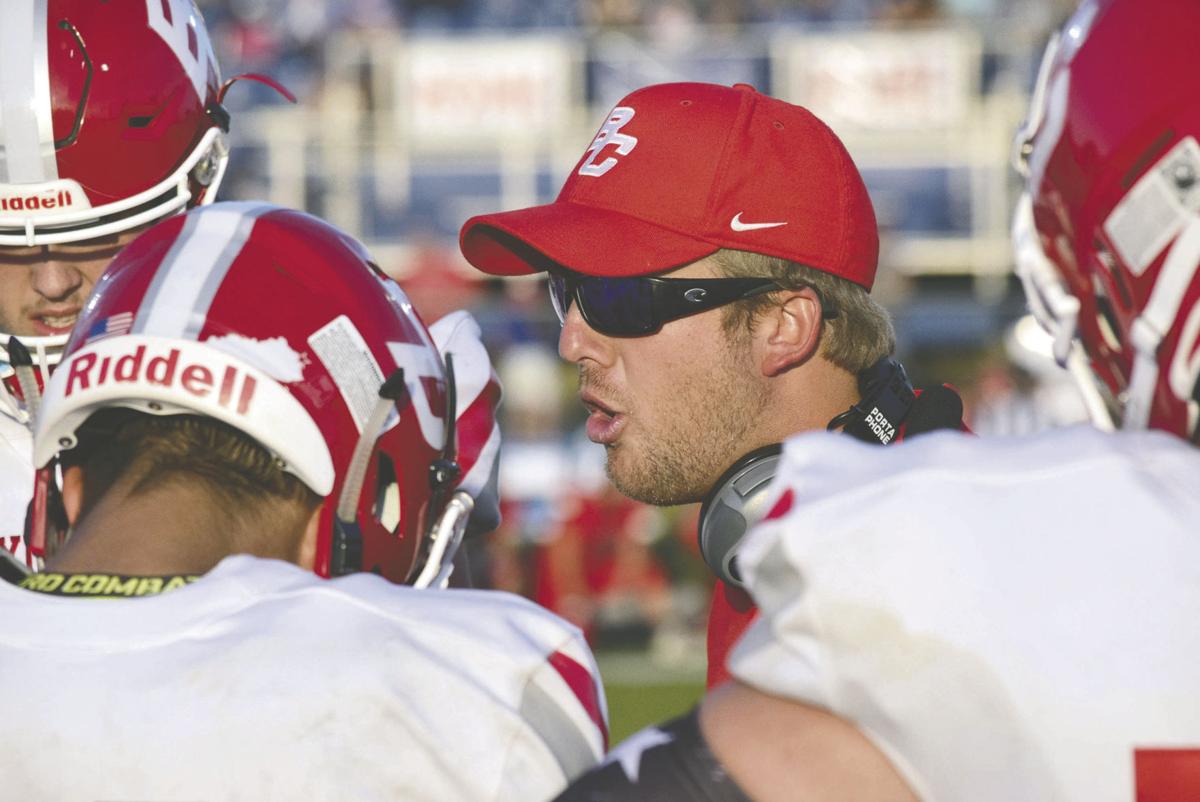 Boyd County football coach Evan Ferguson addresses the Lions in a huddle during their game against South Laurel in the Recreation Bowl in Mount Sterling on Aug. 24. 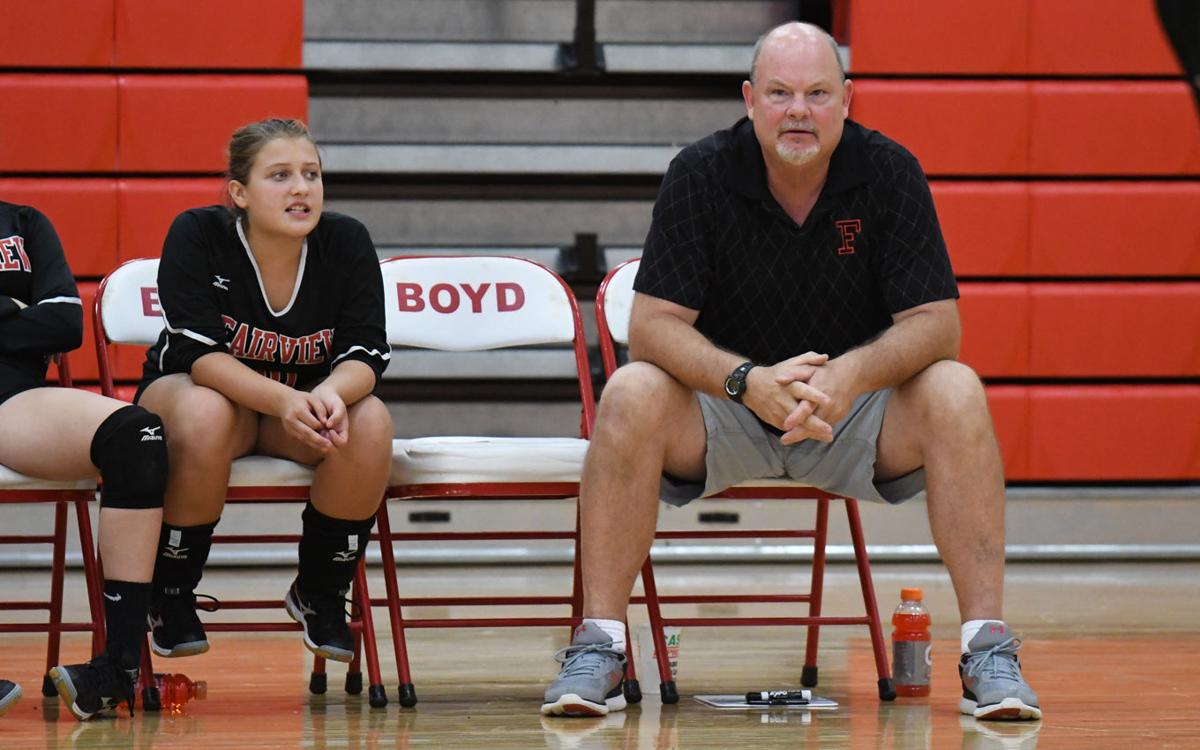 Fairview volleyball coach Rick Lambert with the Lady Eagles during their match at Boyd County. KEVIN GOLDY | THE DAILY INDEPENDENT

Boyd County football coach Evan Ferguson addresses the Lions in a huddle during their game against South Laurel in the Recreation Bowl in Mount Sterling on Aug. 24.

Fairview volleyball coach Rick Lambert with the Lady Eagles during their match at Boyd County. KEVIN GOLDY | THE DAILY INDEPENDENT

Area coaches will welcome back players today after some restrictions for team activities were lifted by the KHSAA.

Teams still have to maintain strict social distancing and health guidelines due to ongoing COVID-19 concerns. But after spending several months apart, everyone is excited to be together again.

“It will be beneficial for the kids and for everybody,” Raceland football coach Michael Salmons said. “They get around people they know care about them not just as a football player. We want to make sure that everybody is healthy and well in all aspects, especially mentally and physically. The physical exercise will help in those other areas as well.”

Sports have been separated into two categories by the office of Gov. Andy Beshear, and they have separate conditions that must be met when teams reconvene this week. “High-touch” sports include volleyball, soccer and football. The guidelines are broken down into segments after the mandatory dead period ended on June 1.

Segment 2 becomes effective today and will last through June 28. High-touch sports are not allowed to conduct competition or even simulated competition and are advised that sessions must focus on skill development, general conditioning and instruction without game formations. No more than 11 individuals should be permitted in any small group during this segment.

“Looking into next week, I am extremely excited to get to interact with my players,” Boyd County football coach Evan Ferguson said. “Traditionally, this is our final strength and conditioning push of the offseason before we get to start practice. I am glad we are working to get the kids back into shape. The players have been doing a great job on their own with at-home workouts.”

West Carter football coach Daniel Barker said his team is adjusting to the uncharted territory that high school teams will face this offseason.

“We stay in constant contact,” Barker said. “When we left school (in March), each of our coaches took a handful of our kids and they were responsible for keeping in touch with them. I would touch base with all of them. There has been a group conversation between six or seven kids, checking on each other and encouraging each other. Our kids are doing well. They just want to get back together.”

Fairview volleyball coach Rick Lambert is approaching team activities very cautiously over the next two weeks. He will rely on equipment and encourage individual workouts.

“They are going to make us wait two more weeks before we can do anything with a ball,” Lambert said. “We do have one of those AirCat training machines. We can let them practice hitting or setting but we have to clean the ball before we reload it into the machine. I may put the player’s personal number on each ball. We will have a total of 10 people there at a time and keep cleaning the place.”

Team conditioning will be a major component of the Boyd County volleyball schedule, according to coach Katee Neltner. She wants her team to be ready for the road ahead should further restrictions be lifted.

“While not ideal, the superintendent (Bill Boblett) and athletic director (Pete Fraley) have worked hard to give us specific guidelines of cans and cannots,” Neltner said. “Right now, we are playing the hand we are dealt and look to be in shape come July when hopefully we are allowed to go all-out.”

“A huge part of volleyball is conditioning and endurance,” she added. “While it's frustrating to be capped at what we can do, our girls have been at home for going on four months and conditioning isn't a bad thing at this point.”

Russell girls soccer coach John Perry wants to focus on getting his players back into game shape over the next two weeks. The team will see an increased workload during the current segment while leaving time so they can work on their game during off days.

“Most of these kids haven’t played any type of sport or any physical activity since last fall,” Perry said. “In order to prevent injury, we want to make sure the players are well-conditioned to start going with minimal restrictions in July. We will start two-a-days on Monday, three days a week. That will leave Wednesday and every other Friday open if the girls want to use that time to get some touches on their own off-campus, at home or wherever they choose to do that.”

Perry believes getting the players together, even in small groups, can boost morale and team camaraderie.

“I’ve had many conversations through this thing about how we as people are not designed to be separated from our friends and family,” Perry said. “For relationships and team building, it’s important that they get to spend time with each other and focus on reconnecting.”

Lambert also acknowledged the players’ support system off the court is just as crucial to prepare for the upcoming season.

“We have done a ton of individual workouts with and without the ball,” Lambert said. “I have been talking to them about going online and looking at stuff. They know a lot of drills they can do individually. I have several sets of sisters that are playing and can work on passing to themselves. I’ve heard that parents are also helping their kids and putting up nets at the house.”

Cross country is deemed a “low-touch” sport and will start Monday with lighter restrictions, as long as players and coaches follow social distancing guidelines. Rowan County girls coach Shawn Thacker said today will be his squad’s first in-person meeting this season and expects his runners will be invigorated to see their teammates again.

Russell boys and girls cross country coach Anthony Thompson, along with Thacker, has taken advantage of technology during the dead period to keep the team connected and motivated. The Red Devils use the Strava running app to set up a daily routine.

“Our athletic director, Joe Bryan, has done a fabulous job giving us updates and what is expected from the health department and the KHSAA,” Thompson said. “We are grateful for that. We have an app that the kids work with to stay on a schedule. They can still have some accountability and don’t have to be face to face.”

“This week, we will start with two days of practice in person,” he added. “The kids will arrive in masks for the meeting portion of practice and remove them for the conditioning part, all while keeping socially distant.”

Thacker and Thompson said their teams have stayed on course during the dead period and are thrilled to start running towards a new season with their classmates.

“It’s going to be a little different than normal,” Thacker said. “You have to put in some protocols with the spacing when kids get there. Coaches are going to hang some flags on the fence and everybody has to go to an assigned flag when they get to the track. They can stay in their social distancing space.”

“The biggest hurdle our kids are having to overcome isn’t fitness,” Thompson added. “That’s the easy part. The social and emotion things that go on with being a young person and not being able to associate with your peers are tough. We are social creatures and we want them to be engaged.

“We have good kids, so our job has been pretty easy.”

Barker said until the guidelines change, the Comets will embrace this time as a positive.

“They have all been doing things at home, but it’s different when you’re back with the team and have a little more structure,” Barker said. “In some ways, it might be good that we can’t touch a ball yet because we can just focus on conditioning. We haven’t looked at it as a negative.”

Salmons believes his returning players will adjust well because of the solid program in place and the Rams’ expectations.

“Our continuity probably gives us an advantage over some,” Salmons said. “We had a staff meeting last week and all of our guys were there. Going around the room, there are only two or three guys on our staff that haven’t been with us double-digit years. Coach (Randy) Vanderhoof is pushing 40 years and coach (Mark) Lewis is pushing 50 years. We don’t have a lot of staff turnover. This year, we are lucky to have zero. My approach hasn’t changed. We are still trying to play on the first Friday in December.”