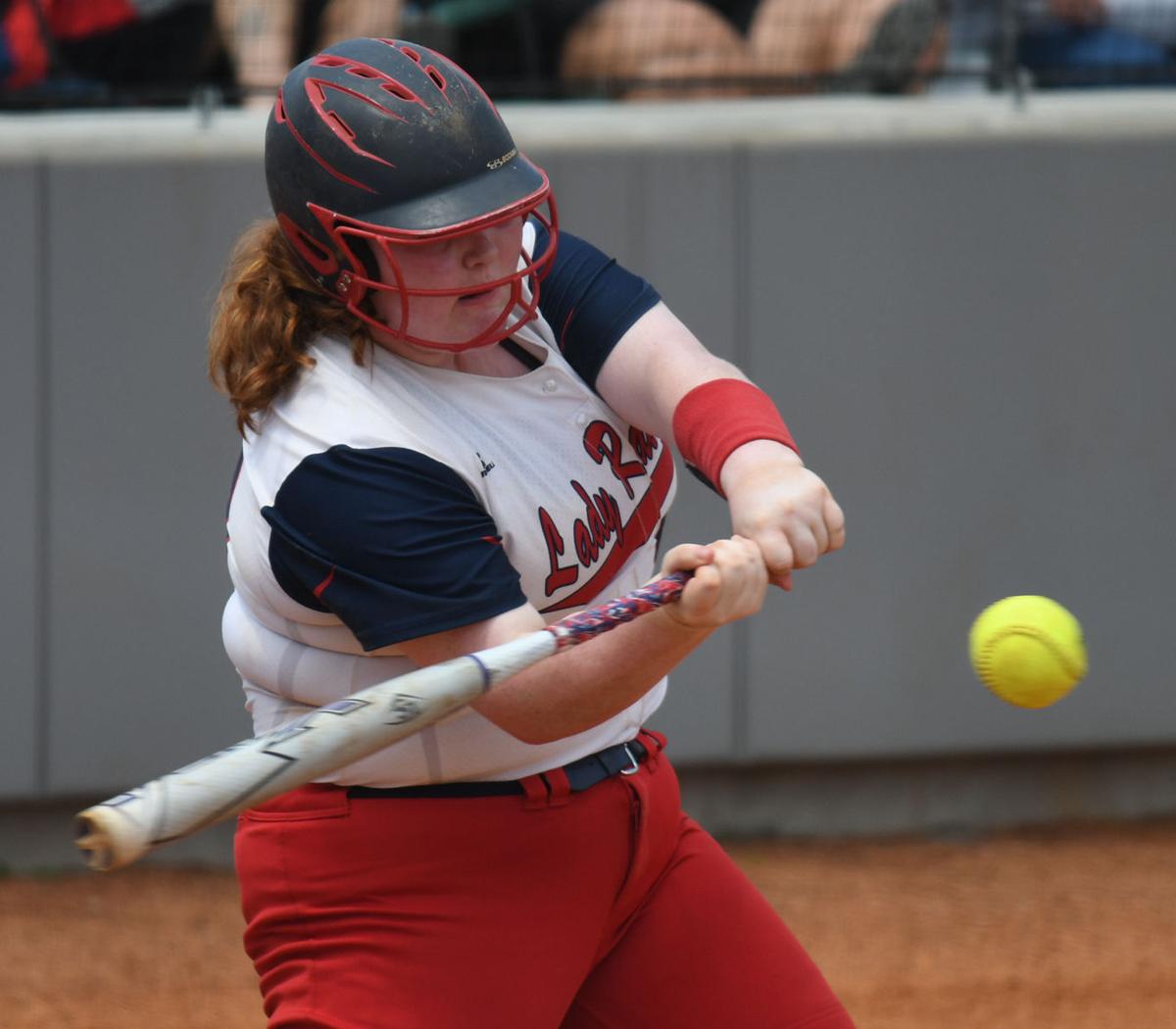 East Carter's Audrey Manning got a base hit to right field against Raceland in the second inning during the 16th Region tournament on Saturday in Cannonsburg. KEVIN GOLDY | THE DAILY INDEPENDENT 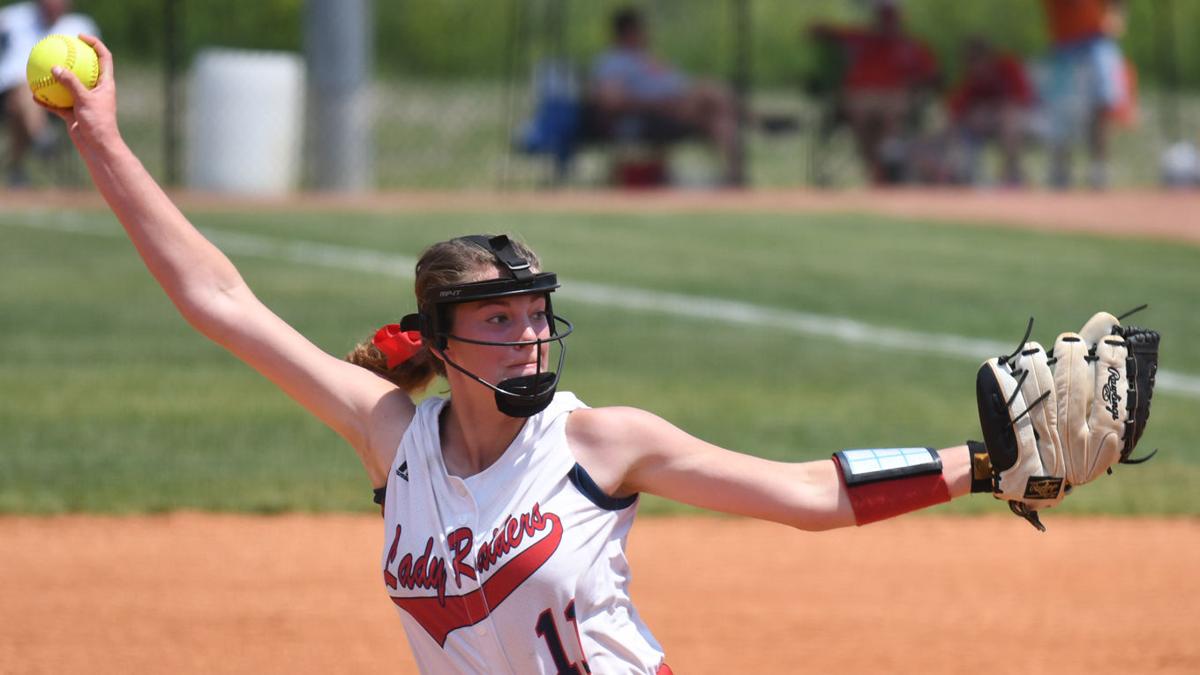 East Carter's Skylier Bloemer pitches to Raceland in the third inning during the 16th Region tournament on Saturday in Cannonsburg. KEVIN GOLDY | THE DAILY INDEPENDENT 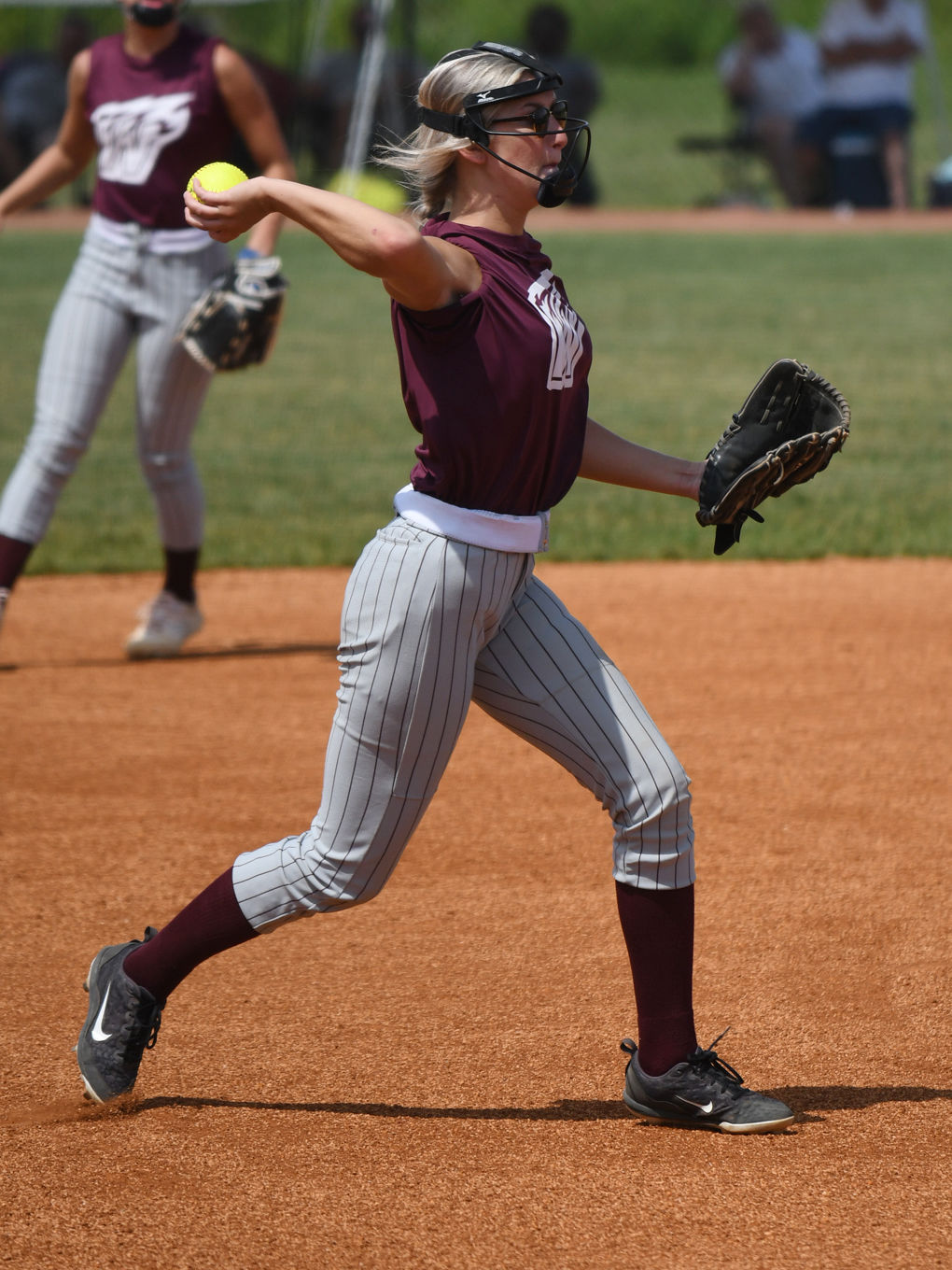 West Carter third baseman Kelsey Nichols fields a ball from Rowan County's Elaina Ward for an out in the first inning during the 16th Region tournament on Saturday in Cannonsburg. KEVIN GOLDY | THE DAILY INDEPENDENT 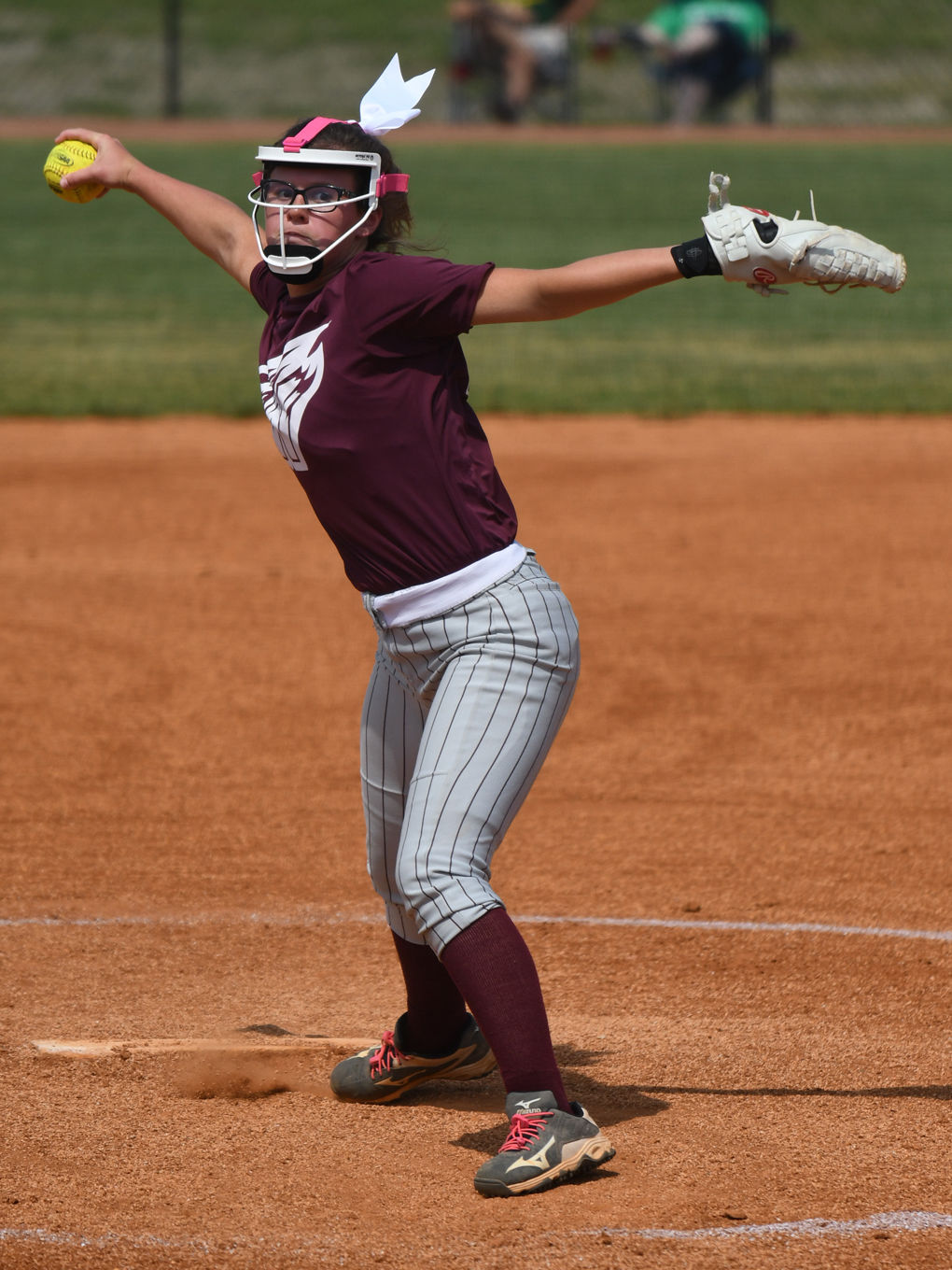 East Carter's Audrey Manning got a base hit to right field against Raceland in the second inning during the 16th Region tournament on Saturday in Cannonsburg. KEVIN GOLDY | THE DAILY INDEPENDENT

East Carter's Skylier Bloemer pitches to Raceland in the third inning during the 16th Region tournament on Saturday in Cannonsburg. KEVIN GOLDY | THE DAILY INDEPENDENT

West Carter third baseman Kelsey Nichols fields a ball from Rowan County's Elaina Ward for an out in the first inning during the 16th Region tournament on Saturday in Cannonsburg. KEVIN GOLDY | THE DAILY INDEPENDENT

East Carter’s winning philosophy will remain the same, but achieving that desired effect will look a little bit different this season.

The Lady Raiders’ strategy will change from long balls to long on speed and athletic ability.

East Carter coach Derek Calhoun is entering his ninth season in Grayson and will start 2020 with four seniors, no juniors and a bevy of underclassmen.

“I like where we are at,” Calhoun said. “This will be the youngest team that I’ve had. They are a very exciting group to watch. This is a little bit different than in years past. This year with the youth, we have a lot more speed. We’ve had the big names and the big hitters over the years. We have a lot of girls that people don’t know about that, but they are going to hear about in the next few years.

“We’ve going to play a different style this year,” he added. “We are looking forward to getting back onto the field.”

The rest of the 62nd District plans on picking up the pace. Elliott County coach Jack McDaniel sees a more competitive team this year after his players added more time on the field in the offseason.

“Up until last year, my daughter, (junior pitcher) Maleigh, was the only one who played travel ball,” McDaniel said. “Last year, I had six girls that are playing travel ball. We’ve had great commitment during the offseason. We’ve had several girls come out since last October during open fields that have worked hard to get better.”

West Carter will field a veteran club that includes seven seniors. Ragan Adkins, Kallie Burchett and Becca Nolen just had another successful year on the basketball court and want to duplicate it on the diamond.

“When you build a tradition of winning in one sport, it follows you,” Lady Comets coach Nate Shelton said. “If you are used to being successful in one thing, you are going to expect it in other things. Their work ethic is one thing that I commend them for. It’s not something you can give a player. They just have it.”

Morgan County will have a new skipper in the dugout, but Eric Conley is a familiar face to his players.

“This is a group of girls that we had when we started a fast-pitch little league program years ago,” Conley said. “I have been out of it for a while. I did coach high school soccer and have been in touch with the program, just haven’t been a part of it the last few years. We brought back one of the assistant coaches from last year, too, that helped with it as well.”

Calhoun wants to use his team’s speed to its advantage. His lineup has been quick to pick up the different game plan this season.

The Lady Raiders won 36 straight games in 2018 and tied Raceland with a region-best 28 victories last year. It’s all part of the culture that has surrounded the East Carter program.

“The key is getting good people around you,” Calhoun said. “They have really bought into the winning atmosphere that they have installed here. ... We had another great offseason. The last two or three years, we have incorporated a weight program and an agility program. The girls have tremendously excelled in those getting stronger and faster on the base paths.”

The Lady Raiders’ season abruptly ended last year when the Lady Rams recorded a 18-1 defeat over East Carter in the opening round of the region tournament. The sting has been a motivating factor in the offseason.

“We didn’t want to go out like that,” Calhoun said. “Raceland killed the ball that night. That has pushed the girls. They are ready to erase that and get back on the field.”

Skylier Bloemer won 22 games in the circle last year as a freshman following in the footsteps of two-time Kentucky Gatorade Player of the Year and current Alabama player Montana Fouts.

“She has developed a couple more pitches,” Calhoun said. “I’m impressed by her work ethic. Sky does a lot on her days off. She still goes to pitching lessons and throws with her dad. Conditioning and sprinting drills, she is always there on the front line. She is an exciting athlete and she’s just a sophomore.”

Seniors Graycee Castle and Hannah Williams will defend the middle of the infield at second base and shortstop. Williams, a Kentucky Christian signee, will rotate into the circle. Castle has been a staple of the team for many years, according to Calhoun. Their skipper said the team will lean on their experience and he called them coaches on the field.

Fearless eighth-grader Lydia Combs will keep making plays in the outfield. Calhoun said Karsen Prichard has the best first step he’s ever seen. She will be joined in the outfield by Lakole Fields, a senior, who is making the transition from the infield.

McDaniel said he has been encouraged by the level of competition during offseason workouts. He has several talented players ready take on the quest of winning the district.

“I’ve challenged them to step up and told them what I expect,” McDaniel said. “I’ve got some younger kids that have stepped up and put some pressure on the older kids. I have some girls that are playing in their second or third year and are now are getting stronger and starting to understand the game.”

It has led to an increase in effort and confidence after a 15-20 record last year.

“We feel like we can be competitive in the district and I think we are going to surprise people this year,” McDaniel said. “I think we are in the middle of the pack in the region.”

Maleigh McDaniel saw the majority of the innings in the circle last season for the Lady Lions. Freshman Skylar Copley will handle some of the pitching duties and play infield.

“Her confidence has improved, and he is turning into a leader,” McDaniel said of Maleigh. “She is trying to lead by example. She is getting stronger and her bat continues to improve.

“Skylar is a long, tall and determined player. She’s got a good head on her shoulders and she works hard.”

Malinda Cox was voted the Most Valuable Player on her team at the 16th Region All-Star Game last summer and is playing with a lot of confidence, McDaniel said. The senior brings an experienced bat and glove to the outfield.

McDaniel said he has many options to field positions on the field. Emily Markwell will be at first base. Hannah Jones or Hanah McDaniel will guard the base paths. McKenna Rose will also be in the infield and Krystal Castro will be receiving the pitches behind the plate.

Shelton said the batter’s box has consumed the focus of the Lady Comets during the offseason. West Carter wants to get back to the region tournament.

“We are building off what we found to be successful at the end of the season,” Shelton said. “We started putting the ball in play, started hitting the ball and made the defense do something with it. We are focused on our hitting game.”

Pitcher Karianna Back returns to the circle along with fellow senior Becca Nolen. Both are experienced and know how to work through the tense innings.

“They are battle-tested and it doesn’t matter who you play, they are going to deliver,” Shelton said. “They’ve got heart and determination that can get you through some innings when things get tough. They’ve been there and they have done it.”

“She’s gotten a lot stronger,” Shelton said about Back. “She knows she isn’t going to blow things past people because she’s a smaller girl. She has been working on her off-speed pitches. Karianna and Becca are going to split the time evenly. I look for them to take alternate days.”

Kesley Nichols will remain at third base. Adkins plays a solid shortstop. Back or Nolen will rotate at second depending on who is pitching. Kandace Chandler rounds out the infield at first base. Izzy Shavers returns from a broken ankle last season and can fill spots on the infield. Chandler and Nichols will handle the catching duties.

Burchett will take care of left field, Shavers in center and Camryn Burton in right.

Conley said he lost three important fielders from last year’s team, but his younger players have adjusted to their new roles during the offseason and expects no drop-off.

“I think we were looking OK coming into the season,” Conley said. “We certainly had some holes to fill We lost our starting shortstop, first baseman and catcher from last year. We’ve had some girls step up and fill those spots. I’m very excited about it.”

The Lady Cougars will rely on the experience of Autumn Cole this season. The senior led the state in stolen bases, according to KHSAA statistics, with 71 swipes in 2019. Conley calls Lindsey Gullett the best defensive player on the squad. Cole will anchor the outfield in center. Gullett can cover several spots in the infield.

“Chelsea Stacy is our pitcher this year,” Conley said. “She has looked good in the preseason. Ally Smith will back her up. Chelsea will be in there most of the time, but Ally is right there behind her. I really like having that go-to (pitcher).”

Abby Keeton and Jerrica Campbell will make up the other two outfielders.

Coach’s outlook: “This year with the youth. we have a lot more speed. We’ve had the big names and the big hitters in year’s past.” We have a lot of girls that people don’t know about that they are going to hear about in the next few years.”

Coach’s outlook: “Last year, I had six girls that are playing travel ball. We’ve had great commitment during the offseason. We’ve had several girls come out since last October during open fields that have worked hard to get better.”

Coach’s outlook: “I think we are looking okay coming into the season. We certainly had some holes to fill. We lost our starting shortstop, first baseman and catcher from last year We’ve had some girls step up and fill those spots. I’m very excited about it.”

Coach’s outlook: “We look to be pretty competitive. We have six seniors that have pretty much been starting since the seventh grade all returning. We look to have a pretty good season if we ever get to have one.”