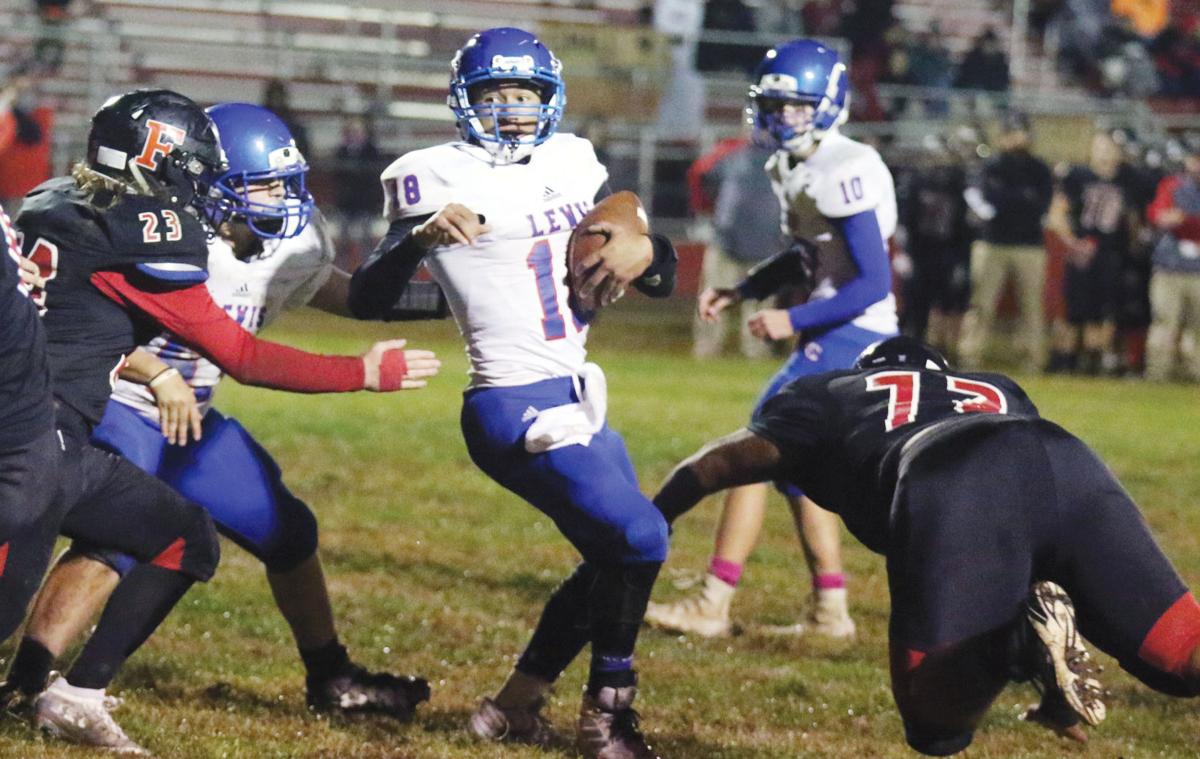 Photo by Matt Jones | The Daily Independent Lewis County’s Moses Jackson spins out a tackle attempt by Fairview’s Ronnie Evans before being wrapped up by Eagle defender Gracin Smith. 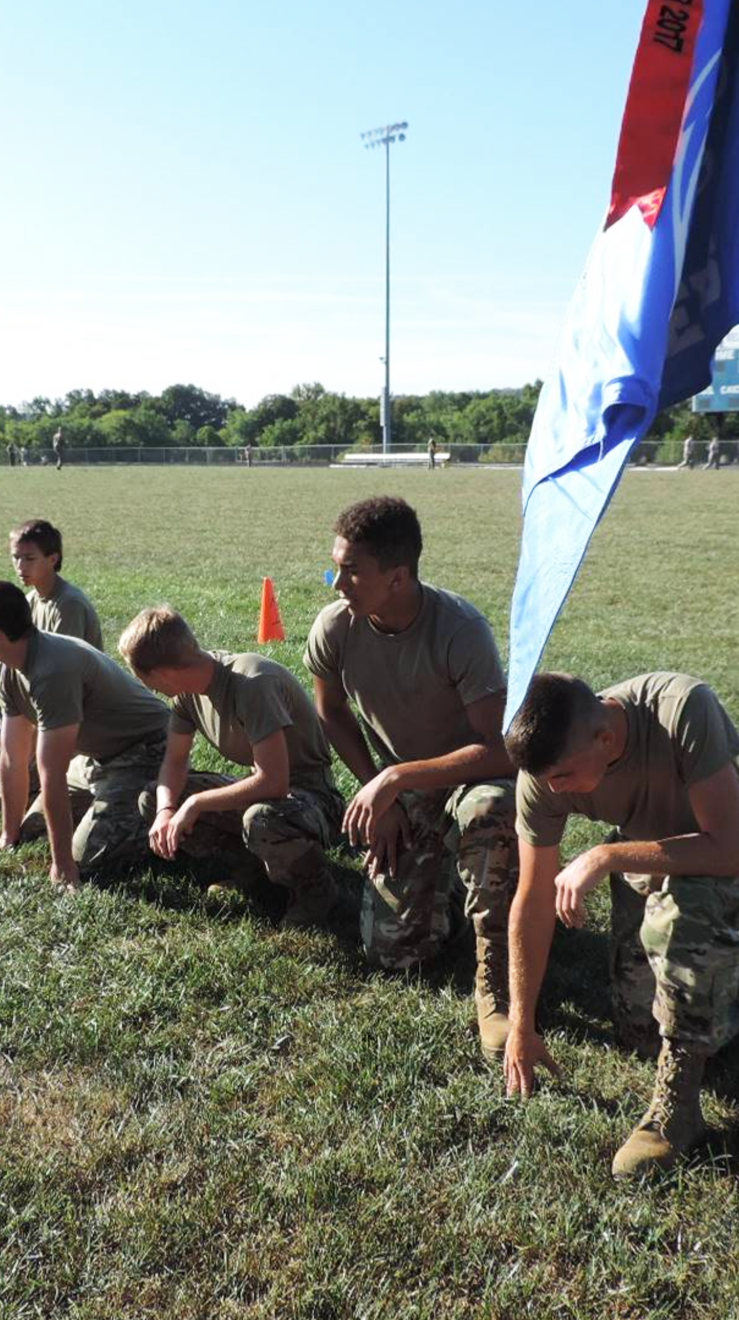 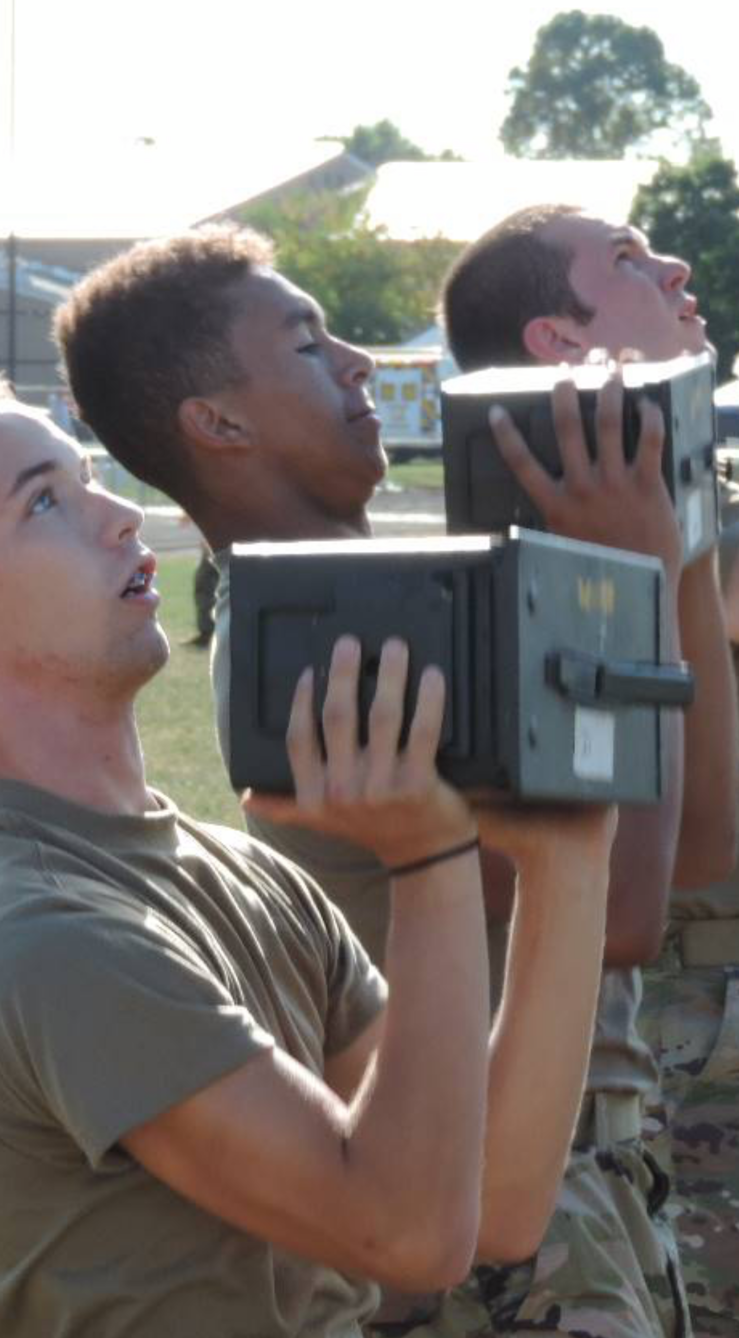 Photo by Matt Jones | The Daily Independent Lewis County’s Moses Jackson spins out a tackle attempt by Fairview’s Ronnie Evans before being wrapped up by Eagle defender Gracin Smith.

Jackson, beset by injuries in his first three years of high school at Lewis County that included torn ACLs in each knee, made what the then-Lions coach viewed as a brash prediction toward the end of his junior year.

“He pretty much said, ‘Well, next year I’m gonna be quarterback.’ I’m like, ‘OK, Moses,’” Hughes said with a deadpan to communicate his we’ll-see-about-that attitude at the time. “And he was.”

Jackson indeed won the signal-caller’s job for his senior campaign last fall, and inhabited it whenever he wasn’t being shifted around in Lewis County’s offense to find other ways to get him the ball.

“And I see that as a quality for him in whatever he tries to do in life,” continued Hughes, who stepped down as coach after last year. “If he wants to, he’ll try to find a way to make it happen. He’s a positive kid that he’ll help others, no matter what.”

Using that attitude, Jackson plans to attend the United States Military Academy in West Point, New York. He intends to try out for Army’s storied football program but expects to get a valuable collegiate experience regardless of how the football side of it goes.

“I’ve never backed down from a challenge, and this is gonna be one of the biggest challenges of my life,” Jackson said. “It’s just exciting.”

Jackson prepared himself for that with a rigorous slate of extracurriculars, Hughes said.

“He kinda reminds me of a lot of those teenage TV shows, where you’d have the high school kid that seems like every episode they were involved in another sport or another activity, and they always had time to do all of it,” Hughes said. “That’s kind of that kid. It seems like, since he got to high school, he wasn’t gonna miss an opportunity. I know he did a lot of health science stuff at one point, clinicals, football, track, ROTC, Raider, open gyms.

“He had the makeup that he will figure something out for himself that he wants to do, and once he focused, he was successful at it.”

The aforementioned “Raider” is one that jumps off even that list. Raider Competitions are outdoor events composed of individual strength tests, distance team running, first-aid events and rope bridge construction or crossing, according to the U.S. Army Junior ROTC website.

“It really brought me closer with a bunch of people, with the rest of the team, and it gave me extra conditioning for football,” Jackson said. “It was just a great experience overall.”

Jackson viewed it as such even though Raider competitions typically involved rising early on Saturday mornings — hours after getting “obviously pounded as the quarterback” on Friday nights, as Hughes put it — to catch a bus for a high school in Ohio or southern Kentucky.

“It was really tough,” Jackson said. “Most (Friday) nights I didn’t even go to sleep after games because of just the cramps. I’d just get on the bus the next morning and sleep on the bus as best I could.”

That showed Jackson’s dedication, according to Hughes.

“If a coach or a sponsor believed in him, he didn’t like letting anybody down,” Hughes said. “He might only have 80% left that morning, but he’s still gonna give it to you.”

Jackson has brought that outlook to the application process to West Point. Service academies require a nomination from either a congressman or a connection to prior service for admission. Jackson obtained a nomination from Rep. Thomas Massie of Vanceburg.

Jackson went to Newport to meet with four West Point graduates as part of that process. He remembers feeling under-dressed for that encounter in khakis and a polo, but pressed on.

“During the interview, it was just really, really nerve-wracking, because you’re looking at four people who have spent their entire lives in the Army, and they’re asking you so many questions,” Jackson said, “and you try to think of the perfect answer.”

Jackson must have come close enough, because he will become the first Lewis County graduate to attend West Point since 1990, according to Lewis County High School principal Jack Lykins.

“We have several graduates each year who make the commitment to serve our country in the military, and I am always proud of those students,” Lykins said. “Presenting Moses his appointment papers to West Point was second only to handing my son his diploma, as far as highlights in my eight years as principal at Lewis County High School.”

Jackson said he became interested in West Point during his junior year when Master Sgt. David Stone, who runs Lewis County’s JROTC program, pitched him the idea, “and ever since then, it’s been a goal for me,” Jackson said.

He is also hoping to continue a football career that just began to take off last fall. Jackson played defensively as a freshman but had ankle problems, Hughes said, and tore his ACL in one knee as a sophomore and the other one in the Lions’ first JV game as a junior.

Combining those struggles with his divided time among several extracurricular activities, Hughes said Jackson “pretty much wasn’t on the radar until this year.”

That changed once the Lions saw what he could do.

“He was our dynamic kid, and we moved him around just to find ways to get him the ball,” Hughes said. “We tried to base a lot of what we were doing around him.”

Jackson did enough to be voted by area coaches onto The Daily Independent’s Small-School All-Area team as an all-purpose player.

“I just went into every game like it was my last,” Jackson said, “because after going through both of my injuries, it really could’ve been.”

Jackson met with an Army coach when he went to a summer camp there, he said, and looks forward to the opportunity for a “fresh start” to his career.

Jackson plans to major in life science, the academy’s equivalent to a pre-medicine program, he said.

“Moving forward, if I’m a kid that that’s a dream of mine, (I would think,) ‘Well, Moses was able to do it; why couldn’t I do it?’” Hughes said rhetorically. “This is a pretty rare opportunity that Moses has, and he earned it.”