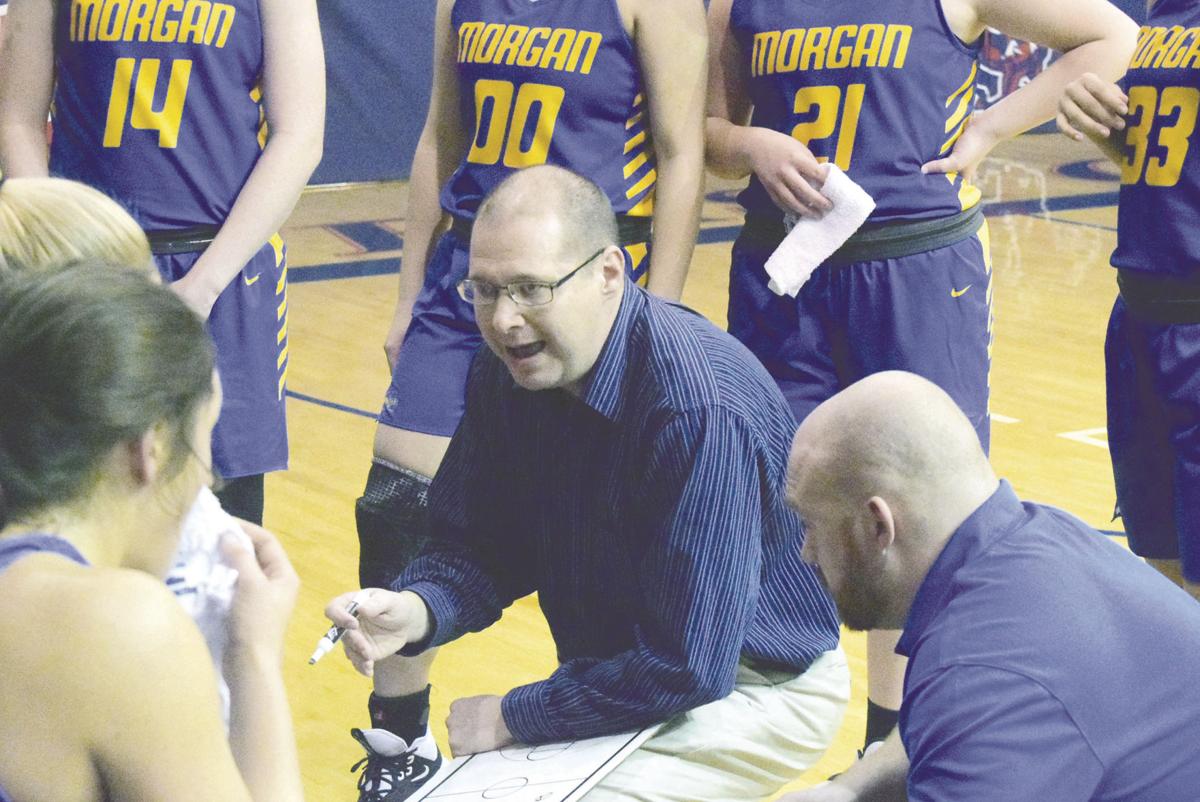 Then-Morgan County coach Kelley Hammonds talks to the Lady Cougars in a break in the action during their game at East Carter on Jan. 27. 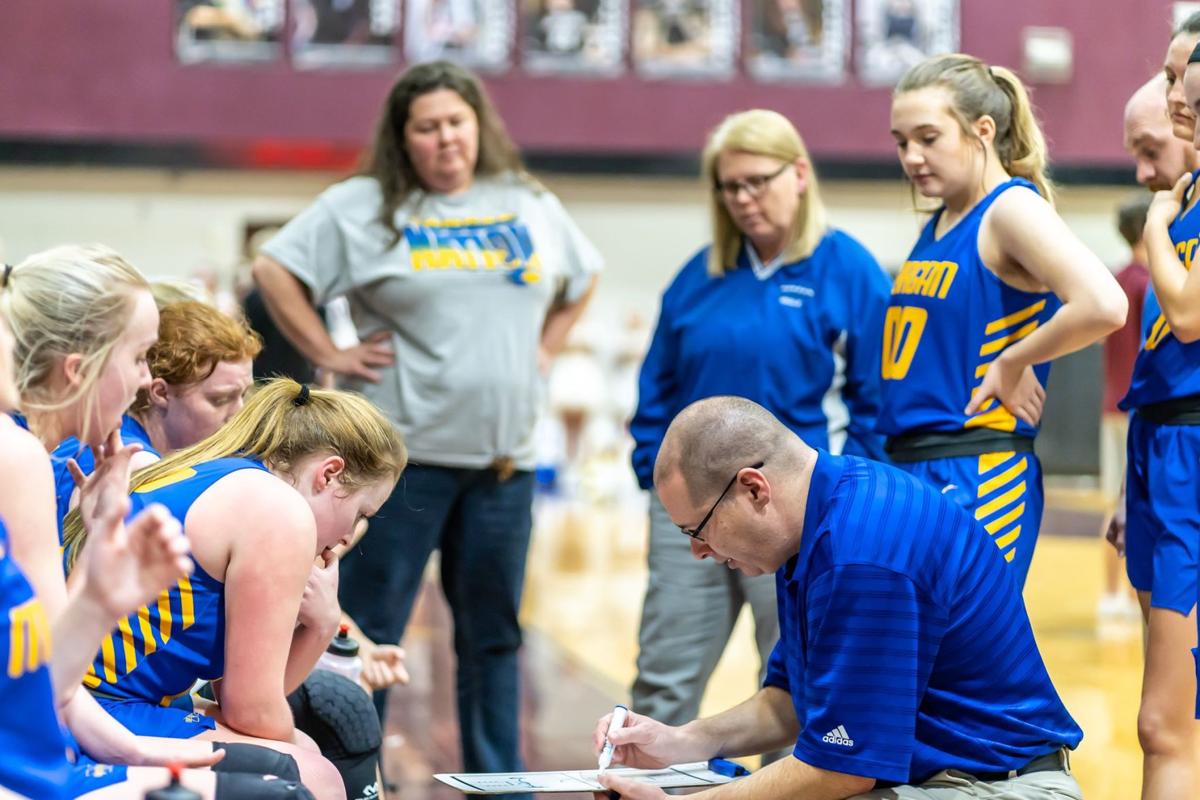 Then-Morgan County coach Kelley Hammonds draws up a play during the Lady Cougars’ game against West Carter in the 62nd District Tournament semifinals on Feb. 24.

Then-Morgan County coach Kelley Hammonds talks to the Lady Cougars in a break in the action during their game at East Carter on Jan. 27.

Then-Morgan County coach Kelley Hammonds draws up a play during the Lady Cougars’ game against West Carter in the 62nd District Tournament semifinals on Feb. 24.

Kelley Hammonds presided over a tie for Morgan County’s best girls basketball start to a season in 12 years.

But even then, after the Lady Cougars improved to 6-4 after a 49-47 win over Montgomery County on Jan. 2, Hammonds’s joy was tempered by frustration with medical problems he’s battled for several years.

“I remember thinking, even at 6-4, that I may not be coming back the next year,” Hammonds said. “It wasn’t a one-event type thing, just on and off. After it was over, I had to waver on it for a couple weeks there before I ended up actually going ahead and turning my letter in.”

Hammonds had no intention of being part of the recent revolving door in his position, but he has resigned after one season as coach due to those problems.

Morgan County went 8-18 and bowed out in the semifinals of the 62nd District Tournament, but the Lady Cougars ended an 11-game skid against district opponents with a victory over Elliott County, topped 16th Region Tournament participant Lewis County and beat Mason County and Montgomery County — both not long ago at the top of the heap in the 10th Region — en route to that 6-4 start.

“I think that’s something for the girls to be proud of,” Hammonds said. “I think they’re gonna keep going in the right direction next year. We lose a lot, five seniors, but I still think the core coming back is gonna be a pretty good bunch of kids.”

The Lady Cougars were 4-2 in games decided by two possessions or fewer in their first 10 outings, but 0-5 in those games after that, which contributed to a tough finish following the promising start. Among Morgan County’s near-misses: 18-win East Carter, to which the Lady Cougars lost thrice, by three points, by six and by seven in overtime; 25-win Paris and 26-win Wolfe County, by four points apiece; 21-win Fairview and 17-win Lewis County, by one point each.

“The close losses were not fun,” Hammonds said. “We had one stretch where like four out of five games were decided on the last possession. In December, it seemed like we hit some shots late in the fourth that got us over the hump a time or two in that little stretch. We actually had good shots at the end of most of those games, and they just didn’t go. That’s how it goes sometimes.”

The increased competitiveness of the Lady Cougars, who had only one fewer win the year prior but had 11 losses by 21 points or more in 2018-19, as opposed to just two such setbacks this past winter, is progress, Hammonds said.

“I think the talent level is pretty good,” Hammonds said. “I think we’re a little more skilled than five, eight, 10 years ago, for the most part.”

He thinks Morgan County may have as few as seven high schoolers on the roster next year, but that includes three of the Lady Cougars’ four top scorers from this season — rising sophomore Jenna Hampton (13.5 ppg), senior-to-be Aspen Ferguson (7.8 ppg) and rising junior Emily Adkins (6.4 ppg).

Morgan County is also excited about its crop of middle schoolers on the way, some of whom have already been on the varsity roster.

“The foundation has been laid for the next coach to come in and win,” Morgan County athletic director Braxton Howard said. “We feel the talent is there, with the right coach, to have a lot of success over the next few years and get back to the regional tournament for the first time since 2012.”

Hammonds preferred not to go in-depth on the exact nature of his situation on the record, but he is scheduled for the latest in a series of surgeries today at Good Samaritan Hospital in Lexington.

He has coached at Morgan County for 20 years, including football and girls basketball assistant stints at the high school level before getting his shot as a head coach this past season.

“Coach Hammonds has been involved with coaching basketball in Morgan County for nearly 20 years now and I expect that to continue, supporting the team and next coach from the stands,” Howard said. “The school administration is thankful to coach Hammonds for the job he did last season.”

Hammonds’s replacement will be the Lady Cougars’ fourth coach in as many seasons.

“Because of that, we are looking to build a culture here with the next hire,” Howard said. “It’s hard to expect kids to completely buy in when you will have seniors playing under their fourth head coach. So we’re hoping to find some consistency with our next coach.”