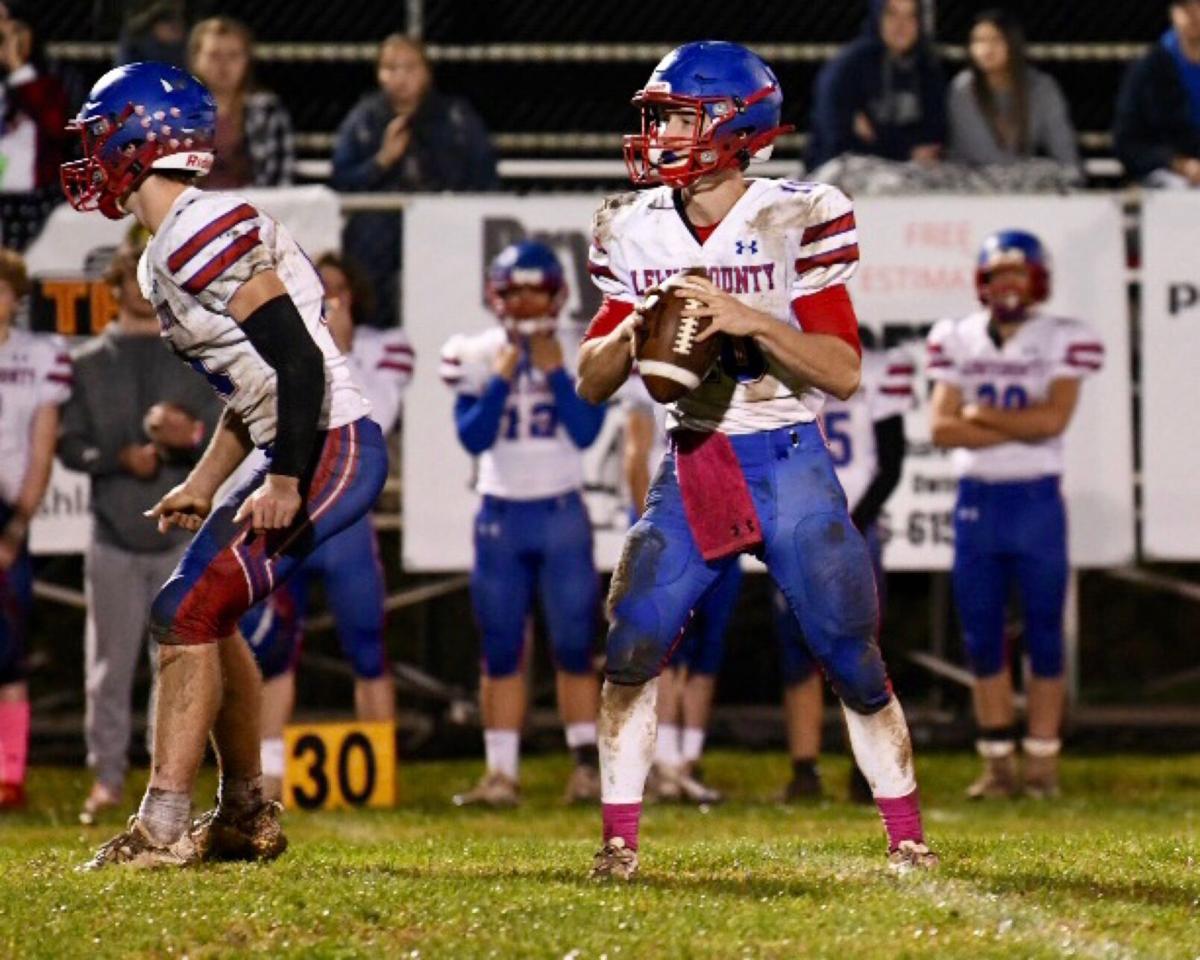 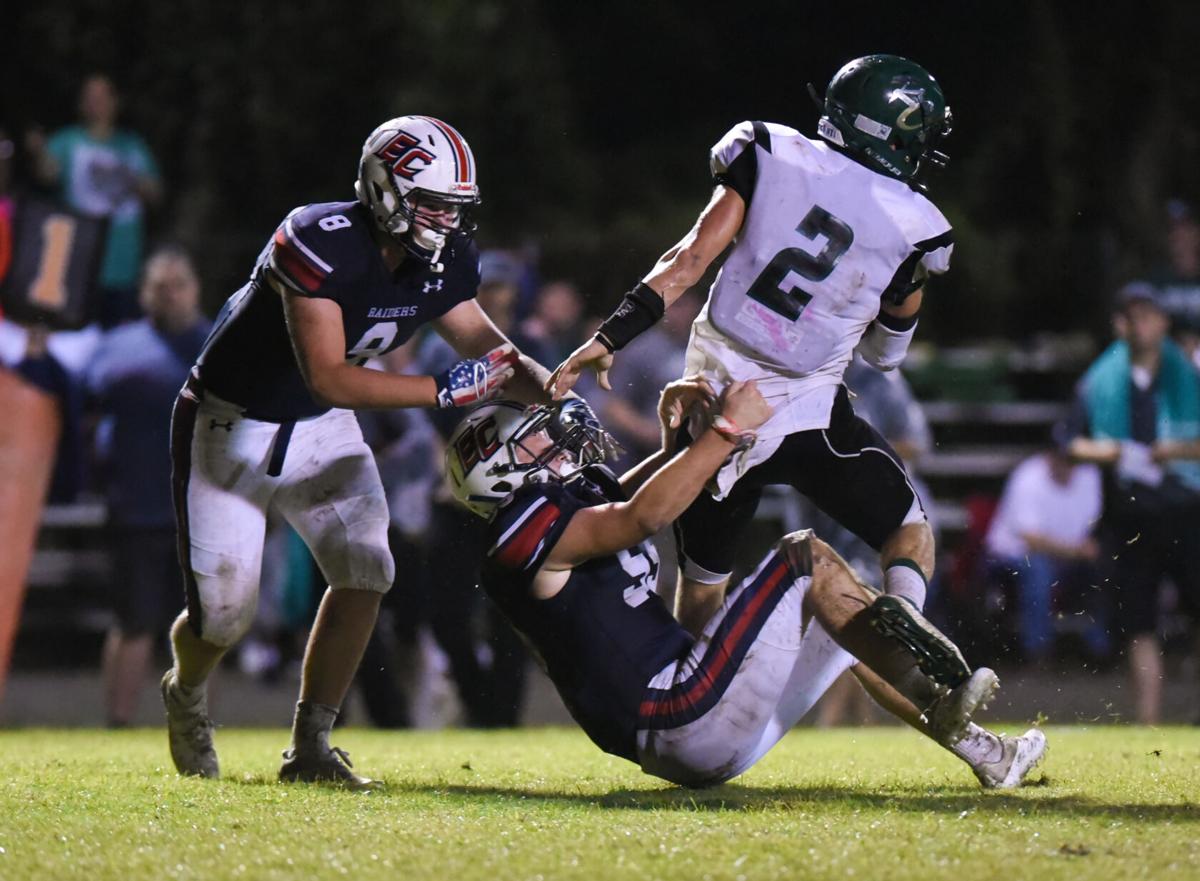 The Serenity Prayer, popularized to the wider American culture through 12-step programs and media that depict them, in part implores God to grant the speaker “the serenity to accept the things I cannot change, courage to change the things I can, and the wisdom to know the difference.”

The prayer was written (worded slightly differently) by 20th-century theologian Reinhold Niebuhr, not a Kentucky high school football coach. But it might have been the mantra of bench bosses hoping — or perhaps praying? — Friday night to end up on the right side of three-way district seeding ties, yet powerless in the moment to strategize their way through the method the KHSAA uses to break them.

Lewis County was the most vivid example of that dynamic in northeastern Kentucky.

The Lions could do nothing Friday night to help their fading postseason hopes except win. Lewis County did, but as the Lions boarded the bus in Westwood after beating Fairview, 28-14, and as scores filtered onto the KHSAA website from across the state, the numbers still weren’t what Lewis County needed them to be.

Two weeks ago, the Lions finished in a three-way tie for third place in Class 3A, District 6 with Powell County and Pendleton County. That’s three teams vying for two playoff berths, and Lewis County was last among the trio in the determining factor — the KHSAA’s 3-year-old ratings percentage index (RPI) — going into their final chance to change it on Friday and for a while afterward.

Initially, it didn’t seem to matter that the Lions had won Friday night and Pendleton County lost to Newport, 3-0 in overtime. And Powell County defeated Gallatin County, 20-6, which didn’t figure to help Lewis County either.

Those weren’t the only games that mattered to RPI, which also takes into account the winning percentage of a team’s opponent on a given night, as well as its opponent’s opponents. But the Lions had hoped for a boost from their victory and the Wildcats’ loss, and didn’t get it, at least not immediately.

So Lewis County and its coach knew things didn’t look good, so much so that the Lions were making peace with the specter of missing the playoffs for the eighth consecutive season — but ending the 2021 campaign on the upswing by winning what appeared would likely be their final game.

“After all the games went final, the RPI updated and we were still at the bottom,” Lewis County coach Bryan Hoover said. “I knew all the calculations weren’t in yet, but at that point I kind of almost came to the realization that maybe we weren’t gonna get in, even though we did win and did what we could do, and I was OK with it.”

The Lions seniors, who had sustained 22 straight losses since winning the finale of their freshman season, found a positive in leaving the field Friday night with a win and some forward momentum, even if they wouldn’t get the opportunity to capitalize on it personally.

So, as night settled upon Lewis County, the Lions still seemed out of the playoffs.

You’ve heard the line in “A Visit from St. Nicholas,” better known as “’Twas the Night Before Christmas,” about visions of sugar-plums dancing in expectant children’s dreams on Christmas Eve. Hoover used a compatible illustration to describe the news that awaited the Lions and their supporters who had slumbered.

The RPI shifted in the late-night hours. Lewis County leap-frogged Pendleton County and leapt into the postseason.

Who cares if it was on a technicality?

“It was almost like just finding that extra Christmas present behind the tree that you didn’t think was there,” Hoover said. “It was a really cool moment for all of us.”

Lewis County will meet top-seeded Fleming County on Friday night at Panther Field. The Lions get a second crack at the Panthers, who beat them 39-6 two weeks ago on the same field.

Fleming County has yet to lose a district game in the three years of the current alignment. Lewis County has never won a playoff game, going winless in eight tries.

Hoover and the Lions know the odds are long Friday. As far as they’re concerned, that isn’t the point.

“I was definitely excited for the kids more than anything,” Hoover said, “just getting them an extra game, extending their season. The senior group especially, with what they’ve been through in their playing career, just letting them know their football days aren’t over was just a weight off my shoulders.”

• Tim Champlin remained in compliance with the code of coachspeak. East Carter’s coach also didn’t pretend that the Raiders’ claim upon the No. 1 seed from a three-way tie atop Class 3A, District 7 doesn’t have implications this week against Greenup County, and beyond.

After all, a playoff road of Ashland and Russell back-to-back is no one’s idea of ideal and the Raiders should be happy to avoid it, even if East Carter has already beaten the Red Devils once this year and gave the Tomcats all they wanted in a tightly contested loss.

“We were able to beat Russell in the regular season and played Ashland close,” Champlin said, “and so (not having) to play one of those in the first round of the playoffs, knowing that if you win you gotta turn right around and play one of them again, was definitely big for us.

“(But) our focus is on Greenup County, and we’ll deal with what happens after that on Friday night at 10:30, 11:00. We’re not looking ahead, not trying to overlook anybody, not trying to focus on anything but just taking care of business each and every Friday night and give yourself an opportunity to keep playing.”

The Musketeers should have no trouble getting East Carter’s attention. Greenup County’s 1-8 record doesn’t convey how dangerous it is: the Musketeers were tied with Ashland into the final minute of play and within a touchdown of Russell midway through the fourth quarter before dropping both of those games.

East Carter led Ashland and Russell, in that order, in the Class 3A RPI rankings entering play Friday, and the Raiders’ 49-20 win over Martin County solidified their hold on the top spot.

That pits the archrival Tomcats and Red Devils against each other, and both teams figured that was coming with only the site still to be decided after the conclusion of play Friday, based on which finished second and which third in RPI between the tied trio.

As it turned out, Russell vaulted Ashland. The Red Devils knew they needed to help themselves Friday night, and they did with a 28-14 win over West Carter.

“We talked about earlier in the week, our playoffs start now,” Russell coach TJ Maynard said after the win over the Comets. “If we wanted a chance to host a home playoff game, we had to win. ... We know it’s gonna be a Tomcat-Red Devil ball game and it’s gonna be a battle.”

That battle will take place in Henry R. Evans Stadium. The Tomcats were idle Friday night, having explored options to add a game but unable to nail one down.

Ashland coach Tony Love would not characterize that as being unable to control the Tomcats’ seeding fate.

“It was in our hands and we let it go,” Love said of Ashland’s loss to Russell on Oct. 15. “So now you are beholden to the mercy of how things play out. And that’s a lesson to learn ... when you have the ability to control the variables, you control them, and when you let them go, then you relinquish your control and you have to just accept things as is and deal with it.”

Love was speaking after the Tomcats’ 14-7 victory against Greenup County on Oct. 22. He went on to correctly project Ashland’s eventual first-round site.

• Rowan County also entered play in the final weekend of the regular season toting the top RPI within a three-way tie atop its district. So the Vikings figured all they needed to secure the top seed and stay away from Holmes and Scott in the first round was to beat Montgomery County.

“I told the team that we control our own destiny, we just need to take care of business,” Rowan County coach Kelly Ford said. “We didn’t want to get into all that calculation stuff at the end. I knew pretty much if we won that game Friday night, it would have locked us in with our strength of schedule and all our other opponents that have been winning all year.”

Ford was right. The Vikings dropped the Indians, 46-34, and stayed where they were. They’ll host fourth-seeded Harrison County to kick off the Class 4A, District 6 playoffs on Friday night. Rowan County topped the Thorobreds, 50-28, on Oct. 8.

The top seed also affords the Vikings a home game in the second round of the postseason if they beat Harrison County for a second time.

“Any time you don’t have to get on one of those Twinkies and travel two hours, it’s always a good thing,” Ford said.

• It’s often said that records don’t matter in rivalry games and previous results don’t mean much in rematches, and Trevon Pendleton said more or less exactly that on Saturday night after his Ironton team pummeled Wellston in the first round of the Ohio Division V playoffs, 49-6.

Up next for the Fighting Tigers is Portsmouth. It’s one of the oldest and most-played series in the Buckeye State which was most recently contested two weeks ago. Ironton won, 36-9, at Tanks Memorial Stadium.

The outright Ohio Valley Conference title and bragging rights were on the line that night. Saturday night means more: the Fighting Tigers seek to continue on the path to a third straight state final.

That proclamation carries an added ring in light of Ironton’s quarterback situation. Fighting Tigers QB Tayden Carpenter, who missed a significant chunk of the season with hip trouble, was injured again in the first encounter with the Trojans with a broken ankle. And Jon Wylie, who stepped in for Carpenter under center during his early-season absence, was unavailable against the Golden Rockets with a lingering shoulder injury.

Fighting Tigers freshman signal-caller Braden Schreck was up to the task against Wellston, throwing for 162 yards and three touchdowns in one half of play.