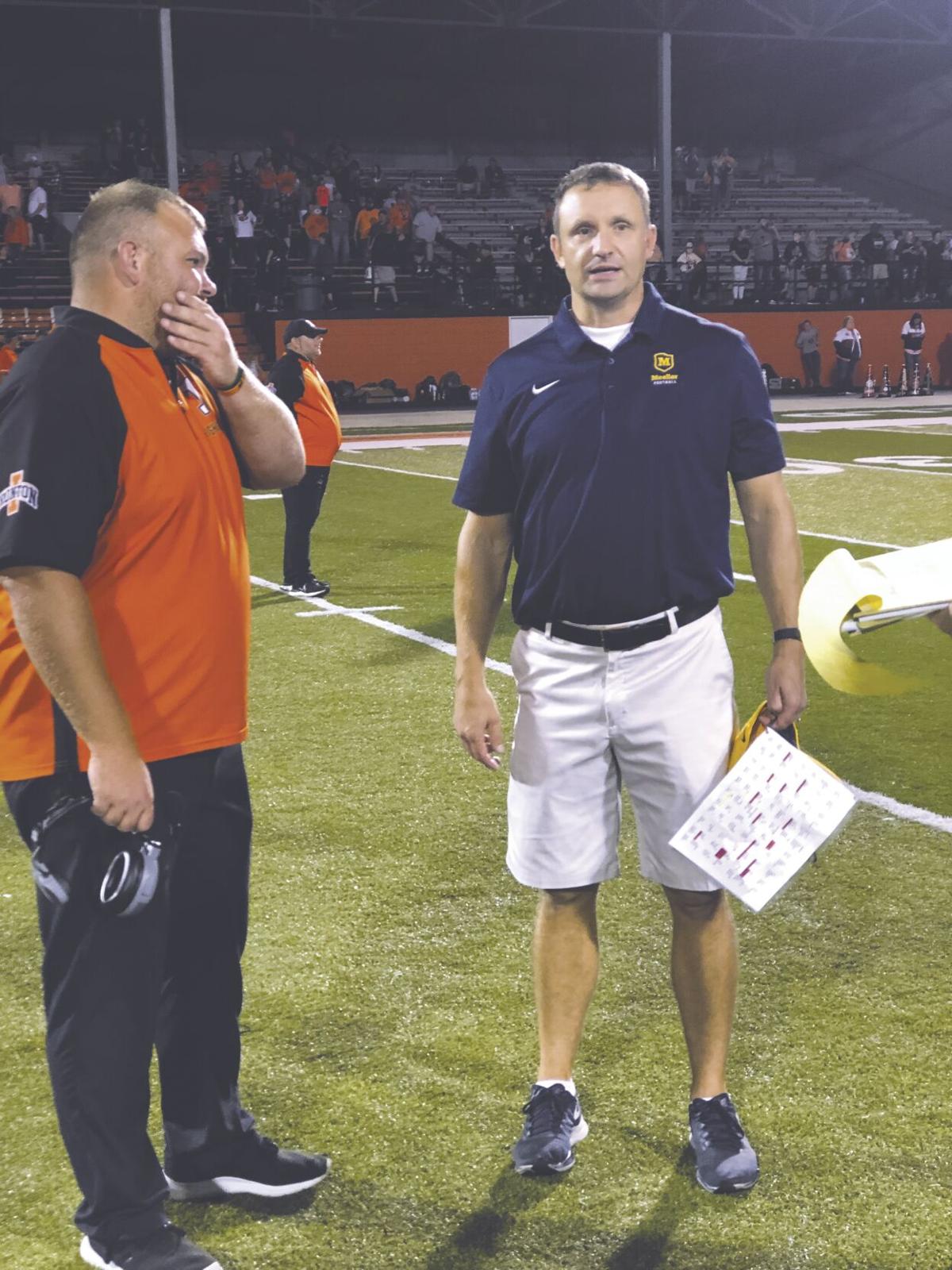 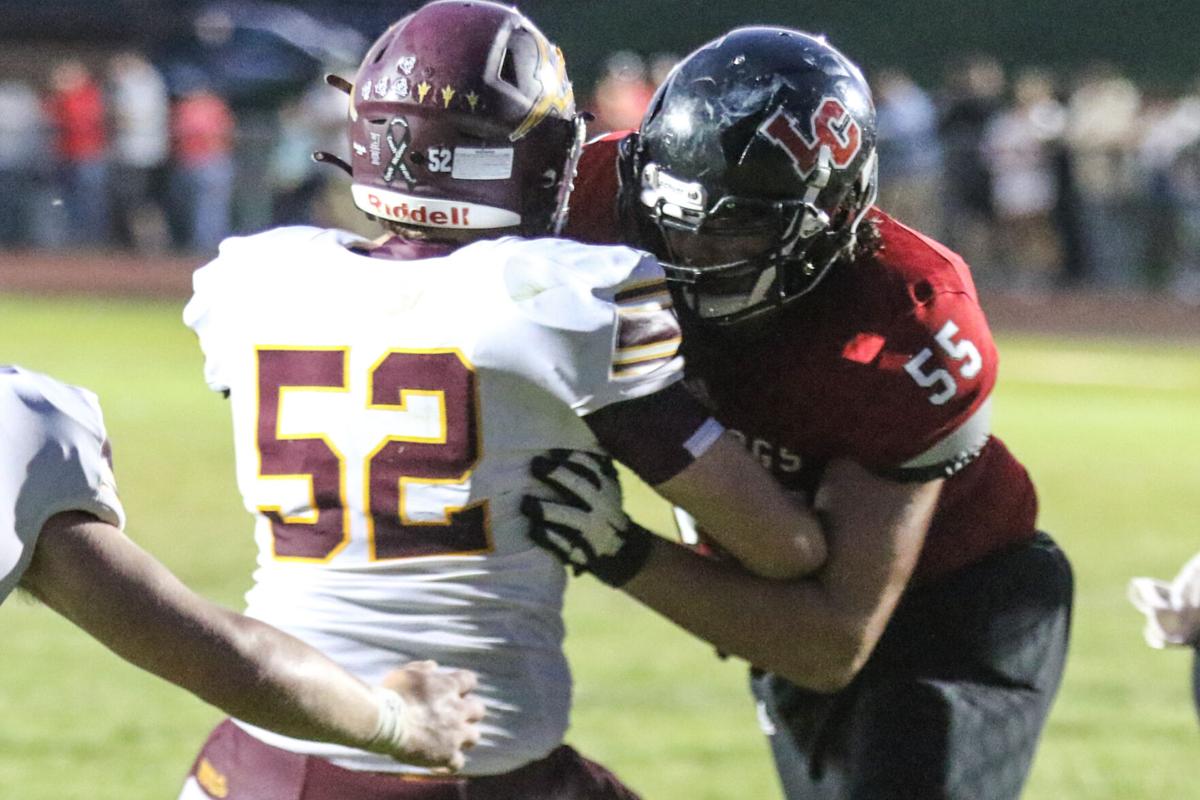 Lawrence County’s Trace Longstreth seals the edge with a block on Russell’s Brice Kirk as Bulldog Dylan Ferguson finds the endzone in the second quarter of Thursday’s game. MATT JONES | THE DAILY INDEPENDENT

Lawrence County’s Trace Longstreth seals the edge with a block on Russell’s Brice Kirk as Bulldog Dylan Ferguson finds the endzone in the second quarter of Thursday’s game. MATT JONES | THE DAILY INDEPENDENT

Mark Elder could laugh about it in a postgame interview.

In real time, Archbishop Moeller’s coach might have been sweating a bit when Ironton’s defense got a great push up front and seemed to have Crusaders back Alec Weeder trapped in his own end zone late in the first half Friday night.

Conventional wisdom suggested the Fighting Tigers were biting off a big hunk by hosting one of the most storied high school football programs in the country, and one with a much larger enrollment and a Cincinnati base at that. Yet Ironton was still close enough in the dying moments of the first half for it to be important that Weeder fight his way out of Tanks Memorial Stadium’s orange turf back to green on the aforementioned play.

He did — barely — as Moeller protected a 14-0 halftime lead in an eventual 25-7 victory. But consider the big-time visitors from the big city impressed.

“This is a tough, physical football team,” Elder said of the Tigers. “They monopolized the clock quite a bit in the first half. We only had four drives and one of them was coming out at the very end of the half, and we’re just trying not to have a daggone safety.”

The former Eastern Kentucky University head coach and longtime NCAA Division I FBS assistant chuckled. He was in a gracious mood, and the Crusaders, after all, won.

Ironton got plenty out of it, too, though. The two-time defending Division V runner-up Tigers dropped their first regular-season game since falling at Ashland on Sept. 20, 2019 — 10 days shy of two full calendar years earlier. But they proved they can hang with the big boys, and for that matter did it with starting quarterback Tayden Carpenter still sidelined, working his way back from injury.

Their fans figured it out, too. When Aaron Masters took a screen pass from Jon Wylie and ran 53 yards to the house to avoid a shutout with 23 seconds remaining, Ironton’s fans cheered like the play was relevant to the outcome.

And even if the result had been determined, in a way, it was.

“We preach anyone, any time, anywhere,” Tigers coach Trevon Pendleton said. “Truly, if (Moeller has) an opening and wants to suit up again next week, we’ll go again. Our kids don’t back down to anybody. They don’t shy away from any competition. We’re ready.”

The teams displayed a mutual respect after the game, too. Elder said Tanks “has gotta be the best small-school atmosphere in the state of Ohio, that’s for sure. This is a neat place.”

Meanwhile, Pendleton spotted Crusaders senior defensive lineman Jackson Garrett on the field and called him over. Pendleton inquired which colleges were showing interest in Garrett. The list included Air Force, and Pendleton’s interest was piqued.

“Tell coach Calhoun at Air Force that Trevon Pendleton at Ironton High School said you can play,” Pendleton said, referencing the Falcons’ head coach. “He recruited me out of high school.”

Garrett’s eyes lit up, and he promised to text Calhoun that pitch as soon as possible.

“Nothing but respect for that program and what they do,” Pendleton said, asked later about that exchange.

Lawrence County hosted the Red Devils in one of only two games played in the state on Thursday night — the other being a 299-mile drive away in Scottsville — due to Septemberfest starting Friday in Louisa.

The Bulldogs made the most of having prime time to themselves with a 39-28 victory.

It was Lawrence County’s first victory against Russell since 1998. Until Thursday, they’d only met three times since then, and the most recent encounter was a 41-12 Bulldogs loss to the Red Devils in 2019 in Louisa.

“We respect Russell so much, and an opportunity like that only comes around so often,” Short said. “Coachspeak, the next game’s always the biggest, but to tell you that our guys weren’t looking forward to that, I think, would be a fib.”

It’s no big secret who will be waiting at the end in Class 3A, District 8. Lawrence County will have to get past Belfry — which it meets on Pond Creek on Oct. 15 and potentially again in the first two weeks of the postseason — to advance meaningfully in the postseason.

Short said Thursday’s result against Russell should surely boost the Bulldogs’ confidence against the Pirates, before reflexively slipping back into coach mode.

“Obviously, we’re worried about Magoffin County at this point,” Short said of Lawrence County’s opponent on Friday. “We enjoyed the victory this past weekend, and Septemberfest, it certainly made it much more enjoyable coming off of a win.”

But, with that said, if Thursday was a dress rehearsal for a big game against Belfry (or two) down the road, Lawrence County knows it can bring its own force.

“We know if we can win our district, we can compete at the statewide level,” Short said. “I haven’t watched Belfry on film, not one time, this fall, haven’t looked that far ahead, but I can tell you this, our guys were dialed in last week. ... Played with a lot of passion the other night, a lot of excitement, and hopefully we can continue to do that and grow throughout the course of the year.”

• Steve Trimble had no particular desire to be Johnson Central’s football coach again, and certainly doesn’t care for the circumstances that led him to be the Golden Eagles’ interim boss.

Trimble does, in at least one regard, have it better off than when he was Johnson Central’s full-time head coach from 1988-91: there’s not much pressure to his job, he said.

Because it isn’t his, it’s Jim Matney’s, and Trimble is only filling it until Matney gets back — sooner rather than later, Trimble and the Golden Eagles hope and pray.

Matney will surely be pleased, if and when that happens, with getting to see Johnson Central’s effort in a 42-36 overtime victory over Cahokia (Illinois) on Saturday for himself.

The Golden Eagles trailed by eight points when Carter Conley scored from a yard out with 1:46 to play in regulation, per WYMT, and Matt Crum added the two-pointer. After Johnson Central stopped the Comanches on their first trip of overtime, Conley struck again with the game-winner in the extra session.

“They were a little sluggish coming out — very understandable — at the beginning of the game,” Trimble said of the Golden Eagles, “and we didn’t play as well the first half as we could have. But they showed their character the second half, and played better and with more emotion.”

Conley ran for 59 yards and three touchdowns, while Crum chipped in 50 yards and the aforementioned two-pointer. Both were pivotal as Johnson Central backs Mason Lawson, who rushed for 185 yards and a 94-yard house call, and Zack McCoart, who tallied a TD, sustained injuries during the game.

Trimble, retired at age 62 after an educational career that included positions as Johnson Central’s principal and the district’s superintendent, had remained involved with football by serving as Matney’s eagle’s-eye-view from the press box and relaying information to him on the sideline via headset to help him call offensive plays.

Johnson Central’s season-opening 60-21 win at Henry Clay on Aug. 20 began Trimble’s 18th year in that role. By the middle of the following week, Matney was in the hospital, where he remains as of press time Wednesday.

The school has not confirmed the exact nature of Matney’s medical situation on the record.

Matney and Trimble’s relationship dates back some 40 years, Trimble said, to when Matney helped Trimble coach wrestling at Johnson Central “when we were young boys, 20, 21 years old.”

Trimble will be more than happy to hike back up to his old spot and cede the skipper’s spot to Matney again.

“Listening to him (over the headset) hopefully has helped me be able to do a pretty good job until he can get back in,” Trimble said. “And I always emphasize this ‘interim’ thing, because the minute he gets well, I’ll be tickled to death to be back up in that press box helping him. I just hope that happens so soon, and I pray about it every day.”

• Paintsville’s 33-6 win at Somerset on Friday was its first in three tries under Tigers first-year coach Trevor Hoskins. He was far less concerned with that, he said, than getting the defending Class A state champions a taste of that success again after a difficult start against a stiff slate.

“They never flinched,” Hoskins said. “That’s the coaching staff, the players, all of them. Just kept our head down and kept working. We knew what kind of ability we have and what our potential was.”

The Tigers began to fulfill it Friday against the Briar Jumpers, who went 6-3 last season but, like Paintsville, had a tough early schedule and numerous personnel shifts. The Tigers displayed better physicality and established their running game more effectively Friday than they had to date this season, Hoskins said.

Hoskins said the win showed signs of Paintsville’s growth from a pair of losses to small-school heavyweights Pikeville and Beechwood in Weeks 1 and 2 by a combined 92-21.

The schedule doesn’t ease up much now, with dates against Knox Central and Perry County Central up next. The Panthers and Commodores are both 4A schools whose combined record is 6-1.

But that’s the point, Hoskins said.

“We can put a schedule together to where we’re gonna go get some early (easy) wins on the board, and I’m sure those games are out there,” Hoskins said, “but I don’t know how that helps you in the long run.

“I think if we can continue to compete in these games, they’re all winnable. There’s nobody we can’t go compete with and win, but the beautiful thing about the schedule is, there’s nobody on that schedule that can’t beat us. So it’s teaching us to compete and finish ball games and be physical.”