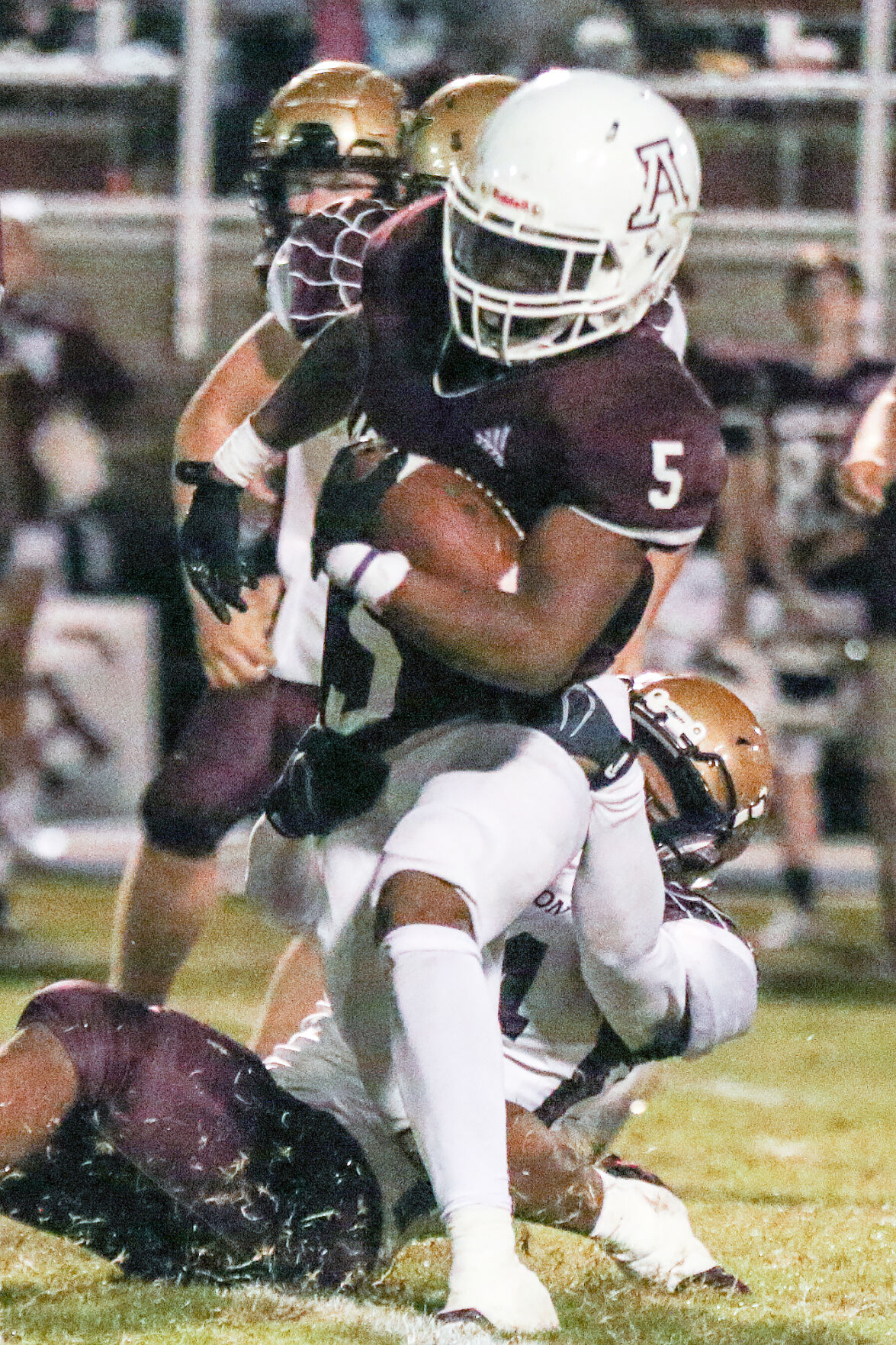 Ashand’s Vinnie Palladino is drug to the ground by Bourbon County’s Kamren Smoot during the third quarter of Friday’s game. MATT JONES | THE DAILY INDEPENDENT 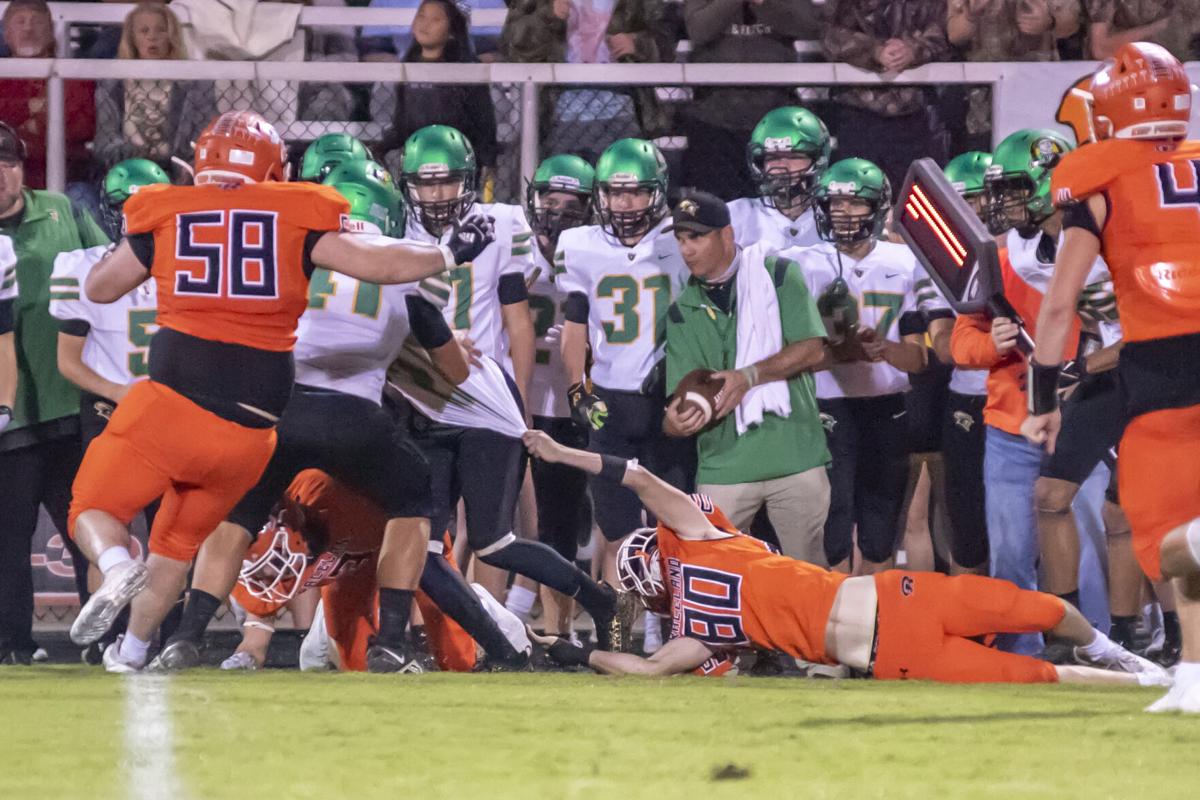 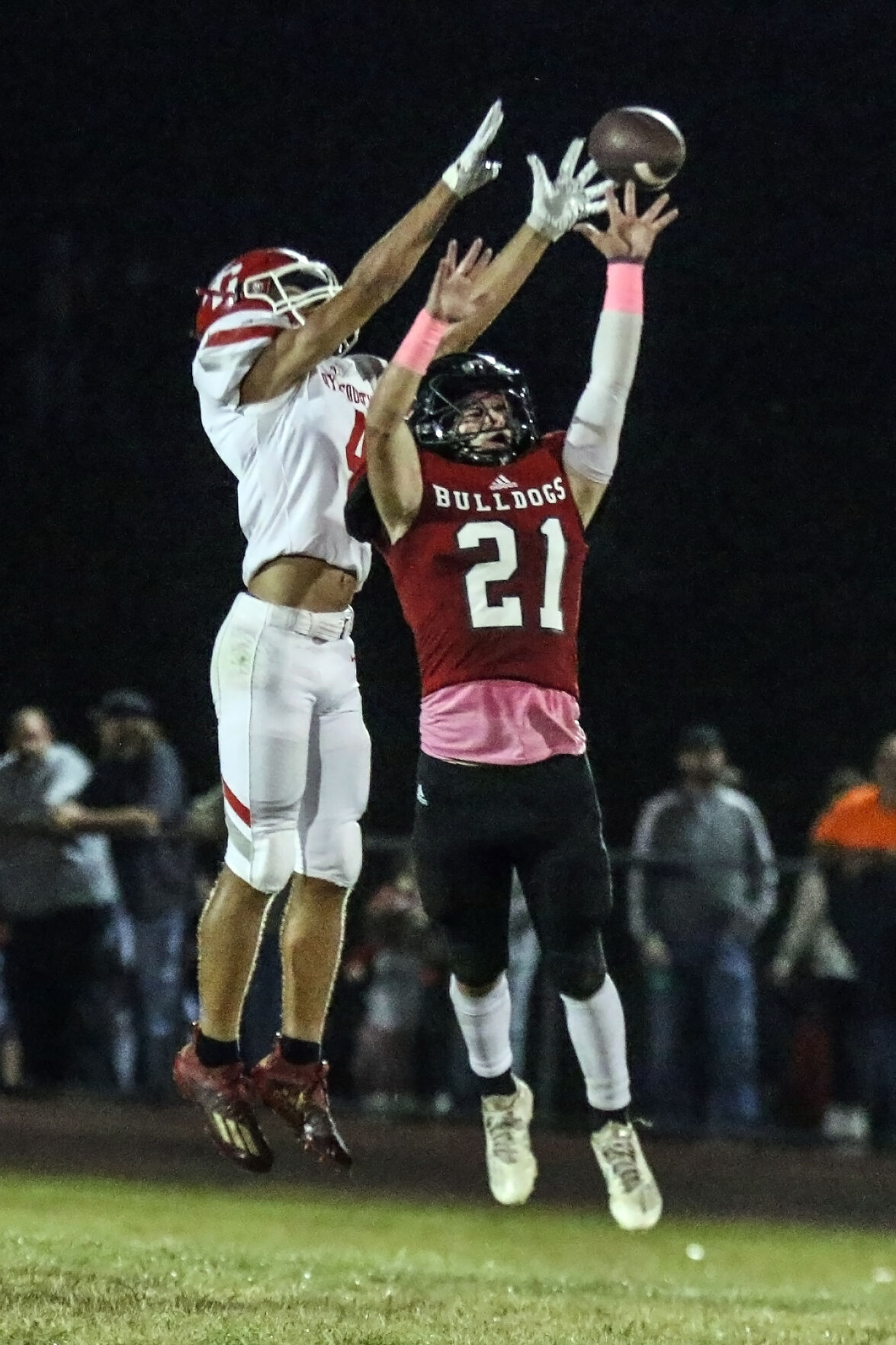 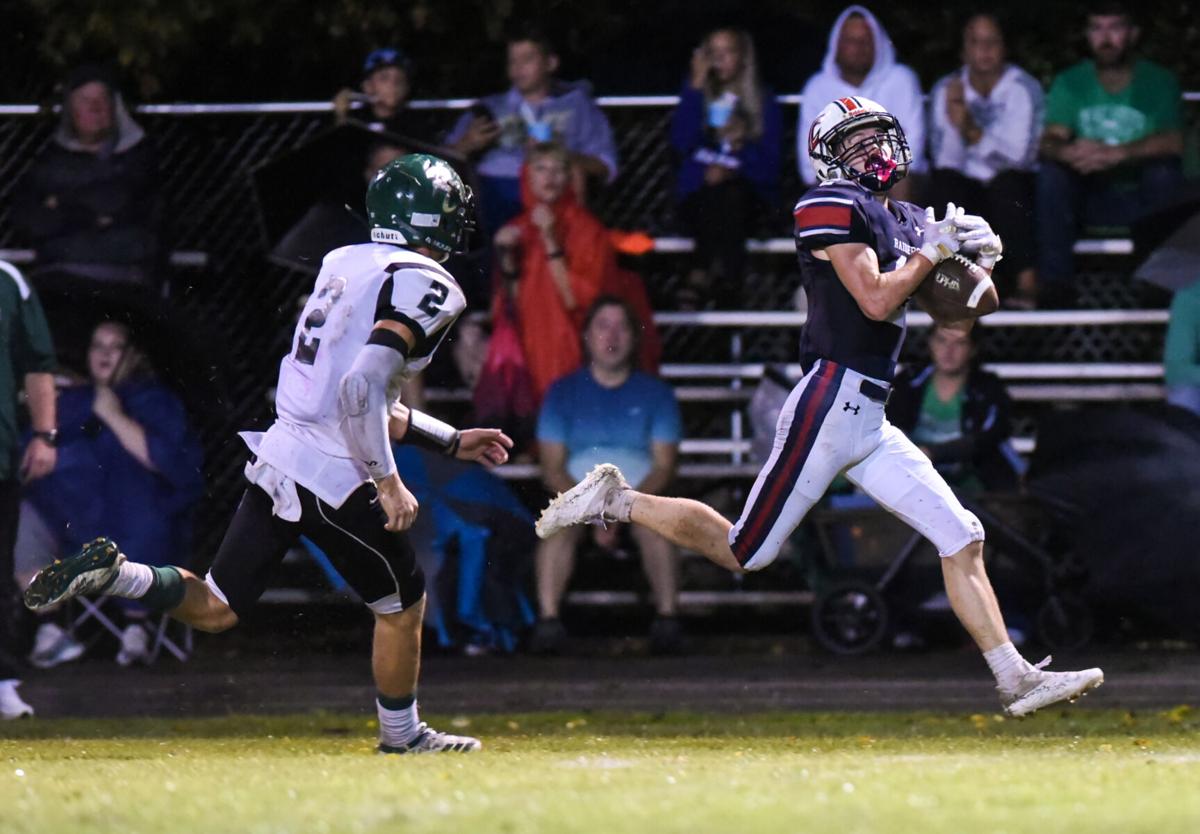 Connor Goodman of East Carter pulls in the reception for long yardage in front of Rowan County's Landin Raines on Friday evening in Grayson. MARTY CONLEY/ FOR THE DAILY INDEPENDENT

Ashand’s Vinnie Palladino is drug to the ground by Bourbon County’s Kamren Smoot during the third quarter of Friday’s game. MATT JONES | THE DAILY INDEPENDENT

Connor Goodman of East Carter pulls in the reception for long yardage in front of Rowan County's Landin Raines on Friday evening in Grayson. MARTY CONLEY/ FOR THE DAILY INDEPENDENT

Ashland’s three-score second-quarter deficit at Elizabethtown on Friday night wasn’t a test — it was a re-test.

Four weeks earlier, the Tomcats had surrendered 21 points in quick succession to George Washington before they took possession shortly before halftime.

That critical drive fizzled due to a holding penalty and a sack, and Ashland never got level again in a 35-21 loss to the Patriots in Putnam Stadium.

Fast-forward to Friday, and the Tomcats fell behind 21-0 — their biggest deficit in 23 months — before getting the ball back with four minutes and change to go until intermission.

In that moment, Ashland coach Tony Love said, he wasn’t at all thinking about the teams’ previous meeting, a 35-14 Tomcats victory in the 2020 state final. And at the time, he didn’t know the 21-point hole would necessitate what might have been Ashland’s biggest comeback in school history to win. (More on that later.)

Love instead had on his mind Sept. 3, the date of the Tomcats’ loss to the Patriots, and he made sure to share that thought bubble.

“I reminded them, it was a similar situation with GW. We didn’t capitalize on some things and finish,” Love said of that setback, “and challenged them (Friday at Elizabethtown) that, we’ve grown as a team or we haven’t, and we’ve gotta be able to overcome these things.”

Ashland did, moving both rapidly and physically. Vinincio Palladino ran for 71 of his 115 yards on that drive, including a 2-yard touchdown.

“I really felt like us getting that touchdown right before half and making it a 14-point game, knowing we got the ball coming back out in the second half, (was critical),” Love said. “As long as we get it to a 21-14 game, then I think the stress level shifts to the other side of the field.”

The Tomcats’ Ricky Padron fulfilled the second part of that formula, taking a pass from Bailey Thacker 48 yards to the house with 4:20 to go in the third frame.

“It was like they said, ‘Enough’s enough and we’re gonna take care of business,’ and they just ratcheted it up to the next level,” Love said, “and really motivated the other guys on defense to start playing harder.”

Jones and Christian had the same effect on the offensive line, Love said. Kicker/punter SJ Lycans continued to give Ashland the field position edge it holds most weeks, and defensive back Brett Mullins made a late interception with the score tied to set up Palladino’s game-winning 18-yard run with 4:16 to play.

The 21-point deficit overcome to win was the most for Ashland since at least 1917, thanks to records compiled by the inimitable Curtis Crye. It’s possible it’s the biggest hole the Tomcats have ever rallied from, but records before that are incomplete.

Before Friday, Ashland’s biggest rally to win was in the second round of the 2004 playoffs. The Tomcats trailed Rockcastle County 20-0 late in the third quarter of a game Ashland eventually won, 34-27, in double overtime.

As for how Ashland got in that hole Friday to begin with, Love said the Tomcats weren’t overconfident after a comfortable win over the Panthers in last year’s state final, and playing three hours from home with the accompanying bus travel wasn’t an acceptable excuse either.

“Really, it was, we need to practice better,” Love said. “We need to have more attention to detail in practice. That falls on the shoulders of the leaders, and the leaders are the ones that started pulling us through in that game.”

Love hopes the Tomcats learned their lesson, and he likes their chances if so.

“The good thing is, I didn’t see the kids flinch, I didn’t see any panic, and that’s a great sign,” Love said. “That’s a lot of improvement from where we were weeks ago. I really feel like this is a team that has started to build some momentum. If we continue to build momentum, if we realize the importance of preparation the week of, then I think we can make a good run in the playoffs.”

It wasn’t because the Lawrence County senior back had lost his red No. 13 shirt. And the No. 21 Fletcher sported instead wasn’t a random selection: they were the same digits — and in the same color — Jim Matney wore during his football career at Belfry.

Matney, Johnson Central’s coach and a 1977 Belfry alumnus, had died three days earlier in connection with COVID-19. Fletcher wrestled under Matney’s tutelage on the youth circuit and also played football and wrestled his freshman year for Matney’s Golden Eagles before transferring back to Louisa.

“Coach Matney, I played for him from second grade to my freshman year,” Fletcher said. “He was really close to me and my family, so I wanted to honor him.”

Fletcher did Matney’s duds proud, rushing for 129 yards and two touchdowns in a 35-14 Bulldogs win over Boyd County.

Fletcher posted both TDs in the third quarter to help break open what was a one-point game at halftime. Defensively, he also broke up a Lions long ball that seemed destined for a fourth-down conversion deep into Bulldogs territory in the first half.

So far, so are the Bulldogs. They’ve won all five times they’ve been able to take the field — with a COVID-19 cancellation forfeit loss to East Carter sprinkled in — and carry the No. 3 ranking in Class 3A back into district play on Friday at Pike County Central.

“In 17 years, I’ve waited my entire career to coach on a team like this,” Short said. “This is a special group. The sky is the limit.”

• Raceland’s football and track and field programs have shown great synergy in recent years, sharing numerous athletes and a coach. Rams track coach Randy Helton — also a gridiron assistant — may want to recruit any Raceland defensive players who aren’t already signed up to wear digital-camouflage uniforms in the spring.

After all, Rams defenders have already grown accustomed to racing, coach Michael Salmons said. And it’s become the key to a stretch of just six points allowed in three games.

“We’ve been doing some timing mechanisms in practice, see how fast all 11 guys can get to the ball,” Salmons said. “I think it becomes a competition. One guy gets there first; he wants to kind of call out his teammates for not being there. That’s contagious.”

That emphasis was born from defensive struggles early in the season, Salmons said. Raceland started the year 2-1, but it yielded too many chunk plays for its coaches’ liking.

“After Ashland, on to Russell, on to Rowan, those three games, we had just given up explosive plays, these big, ginormous plays,” Salmons said. “I’m talking 60, 70 yards. ... Our approach (to fix it) was, hey, we gotta run to the ball, 11 deep, and that’s how you prevent explosive plays. I think our guys finally saw that and bought into that.”

The result was consecutive shutouts of West Carter and Greenup County. The Rams were a minute away from blanking Lincoln County (West Virginia) on Friday night for what would’ve been their first three-game unscored-upon stretch since lining up four straight goose eggs in 1987 when Panthers back Isaiah Smith got loose on Raceland’s reserves from 89 yards out.

Salmons simply encouraged the Rams to “start a new streak,” he said, and said in the grand scheme of things Lincoln County’s late TD doesn’t change much.

“If we give up six points (per game) the rest of the way, we’re gonna give ourselves a chance to do some really special things,” Salmons said.

East Carter held the Engineers on fourth down on the goal line three times and forced four total turnovers on downs in a 37-20 victory in Irvine.

Champlin saw the Raiders getting stretched on Friday as a positive, he said, in their final game before beginning Class 3A, District 7 play on Friday against Ashland.

“We made plenty of mistakes Friday night,” Champlin said. “We’ve gotta clean up those mistakes, but those mistakes put us in bad situations and forced us to do some things and made the game closer, so we had to play the entire game, had to keep battling and find ways to win.”

Champlin said the Raiders stayed on schedule offensively, consistently giving themselves manageable distances to gain on third down.

“Your playbook’s wide open,” Champlin said of those situations. “You can run anything from traps to verticals at that point, so (opponents) have gotta defend the whole field.”

Conversely, when East Carter was defending deep in its own red zone, that actually worked in the Raiders’ favor because of what the Engineers run, Champlin said. Estill County’s spread, with run-pass option and zone-blocking components, is most dangerous when opposing defenses have to defend both horizontally and vertically.

“(Estill County) didn’t have as much room to work with as far as being able to go vertical or stretch the field,” Champlin said, “and so our kids were able to condense, tighten up and play a little closer there and get some big stops.”