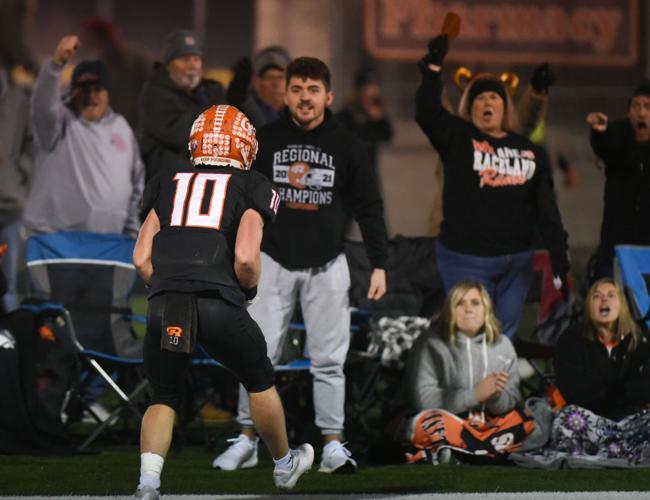 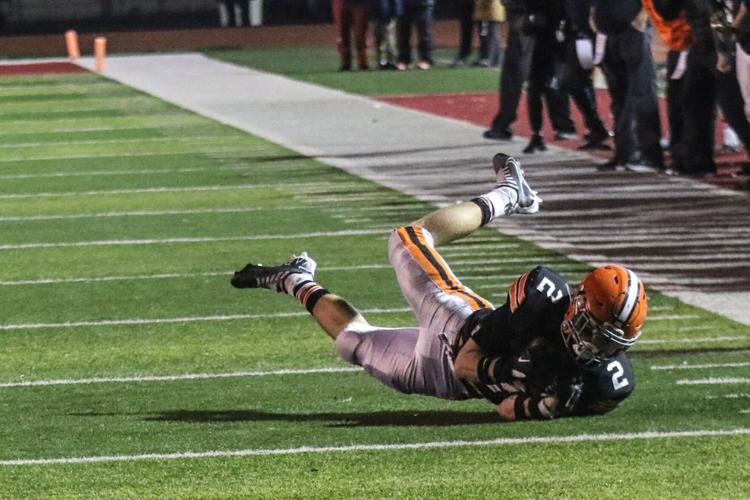 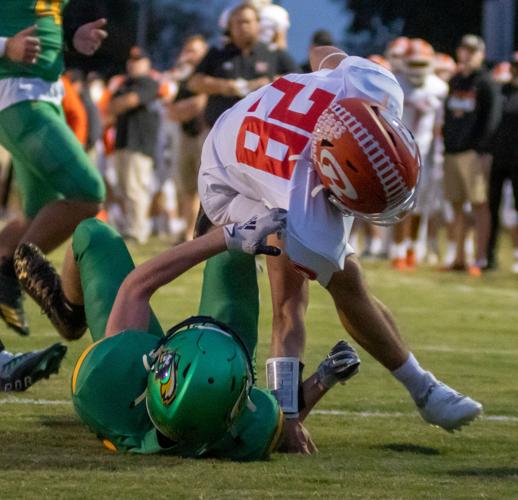 Raceland’s Isaac Browning keeps his balance next to a Greenup County defender on Sept. 23.

Raceland’s Isaac Browning keeps his balance next to a Greenup County defender on Sept. 23.

Michael Salmons thought for a moment on Friday night and grinned slightly.

Raceland had just beaten Louisville Holy Cross in the Class A state semifinals at Ram Stadium to advance to the championship game for the second time in program history.

Asked by a reporter to compare Friday’s celebratory atmosphere to the feel after the first time the Rams did that in 2017, Salmons had a quick response.

“The goalposts are still upright,” the Rams’ coach quipped.

Raceland indeed left those where they stood on Friday night, after famously taking a chainsaw in 2017 to the set that Luke Lemaster had just booted the ball through to top Pikeville, 17-14, in the semifinals.

That illustrates at least two differences between that night — widely considered the most important win Raceland has ever had — and this one five years later.

And two, they expected to do it.

This team’s sights were always set beyond just getting back to that round, and Raceland delivered in kind.

“I would say that our program has evolved, or gone through phases,” Salmons said. “We’re still looking for the big break-through, but you just don’t show up and arrive. It’s a process you gotta go through, and I think our program’s done that.”

After all, Raceland played in the state semifinals for the sixth time in 10 seasons on Friday night. The Rams had never done that before the beginning of that stretch in 2013.

So if previous years were about normalizing playing past Thanksgiving Day, and perhaps feeling the season had been maximized by doing so, this one was about expecting to win on Black Friday.

“I think our program has elevated, facility-wise, administration-wise, player-wise, coach-wise,” Salmons said. “Everything around here is elevated, and I think that’s what leads to a night like tonight.”

That’s how program-building is supposed to go. Not that the feeling was any less joyful on Friday than it was in 2017, but the Rams are growing, they believe, and simply reaching the semifinals again wouldn’t do.

“We wanted to get here last year,” Raceland back Isaac Browning said, meaning the celebration leading up to a state final berth, “but we fell one game short. So coming back this year and working all offseason, it finally feels amazing to come here right now and be able to do it.”

The Rams faced down a big moment early — giving up a touchdown to lead by just 7-6 through one frame — before getting in gear and staying there, all the way until punching across the final TD with 4:13 to play.

Raceland has topped all comers locally, most of them convincingly, for most of the last two seasons, save for a hiccup against Russell early in 2021. And the Rams have done it on a sparkling new surface that wouldn’t be out of place at a much larger school with a wealthier tax base.

But on Friday, Salmons saw past Raceland’s blossom to its roots.

“Just to have a school on the banks of the Ohio River with a four-way stop sign and a red light, and a railroad and a football team, and not necessarily in that order, is real important to these people,” Salmons said. “In Appalachia, people find something to grasp on and they don’t let go.”

Those traits — small-town, blue-collar, chip-on-their-shoulder — are never far from Raceland’s perception of its own identity, even as the long-held and widely relished tag of scrappy underdog becomes less applicable seemingly by the week.

These Rams are for real. Their playing for a state title is no surprise. And if they have anything to say about it, this won’t be the last time, either.

• Forget being down by 14 points. Ironton didn’t even allow 14 points in 11 of its 14 games leading into the Division V state semifinals on Friday night.

But the Fighting Tigers trailed by that margin, 21-7, midway through the second quarter after Valley View’s Ashton Stidham fell on a muffed Ironton long snap in the end zone.

The Tigers trailed by two possessions for the first time since Week 2.

How did they escape an adverse situation they hadn’t experienced in three months — and never for such stakes?

“I have all the faith in the world in this group,” Ironton coach Trevon Pendleton said. “They knew that they weren’t going out that way, and they drew their line in the sand, so to speak, and they bowed up and got it done.”

The Tigers piled up 28 unanswered points to drop the Spartans, 35-21.

Jaquez Keyes ran for three of the four touchdowns Ironton scored during that stretch. Shaun Terry hauled in a TD pass from Tayden Carpenter for the other one.

Pendleton watched the Tigers apply their preparation to dig out of that hole.

“To see them talking amongst themselves in the locker room and pulling a little bit from some of the conversations we’ve had, some of the workouts we’ve had,” Pendleton said, “and then going out and applying it on the field and executing, putting themselves in a situation to come back, was pretty special.”

The Rams last did that on Nov. 6, 2015, when Kane Snyder and Carson Christian each hit for triple digits in a 22-14 first-round playoff victory at Bishop Brossart.

(Hat tip to James Collier for digging up that statistic – which does not include two occasions since then on which two Raceland players ran for 100 yards or more, but one of them was the quarterback.)

Wallace and Browning are two of four Rams at or near 400 rushing yards this season, and four Raceland players are either within striking distance of 300 receiving yards on the year or well beyond that.

With more touches, likely any could be dominant statistically, but that’s not how the Rams are built.

“There’s only one ball, and our guys have really bought into that,” Raceland coach Michael Salmons said. “The one thing I’d say about this football team is ‘unselfish.’ That’s who we are —we really play for each other.”

• Brent Terry had coached football for 31 years, and he decided it was time for a break.

But the veteran assistant, formerly at Boyd County and most recently the mentor of Spring Valley’s highly regarded offensive line, didn’t intend to leave football behind.

“I just get to really talk about ball, which is something I’ve done my whole life, really,” Terry said.

Terry has done it well enough – even though he’d never broadcast before August — to be tapped to join WLGC’s coverage of Raceland-Pikeville in the Class A state final on Friday.

Chauncey Griffith, who coached with Terry in the Lions program and still teaches with him at Boyd County High School, facilitated Terry’s break into the broadcasting business. The duo worked together most of the year on high school and Kentucky Christian University broadcasts.

Terry’s first game was Bath County’s 22-16 win over Fairview on Aug. 19. He’s progressed from that assignment to end the season working at Kroger Field.

“I’m completely shocked that I’m gonna get to call a state championship game my first year,” he said.

Terry is effective at explaining complex tactical and situational concepts to be easily understood by laymen.

“I try to give (listeners) an image of what’s going on and maybe bring a little insight into what coaches are thinking and what each team’s trying to execute, without going into a coaching clinic,” Terry said.

That’s an elusive but important task not typically done well by broadcasters with so little experience. Terry cracked that he’s watched so much football on TV that it’s come naturally.

Terry isn’t sure yet if he will be in the booth or back on a sideline next year, he said, but he’s proven he’ll be comfortable in either role.