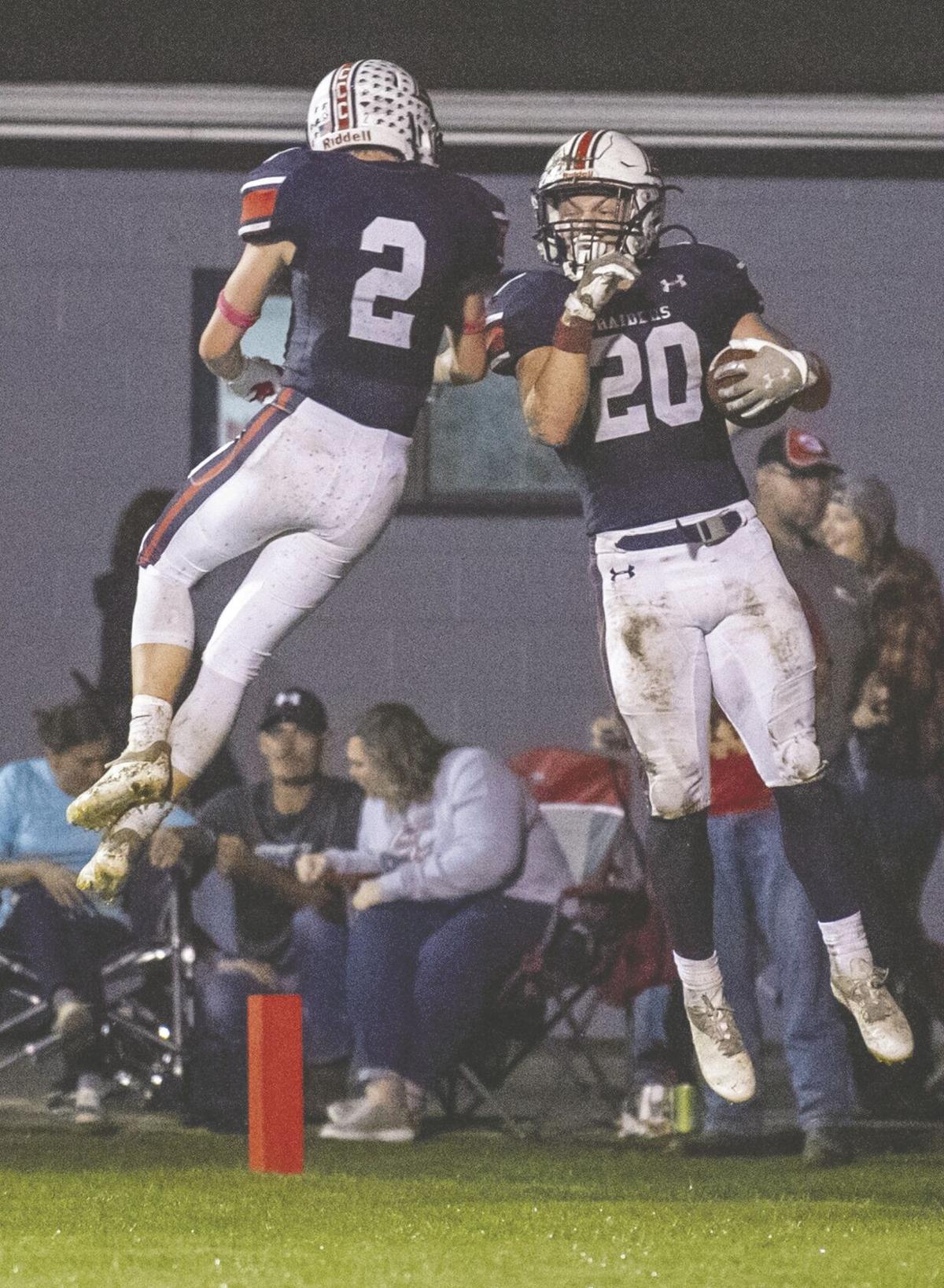 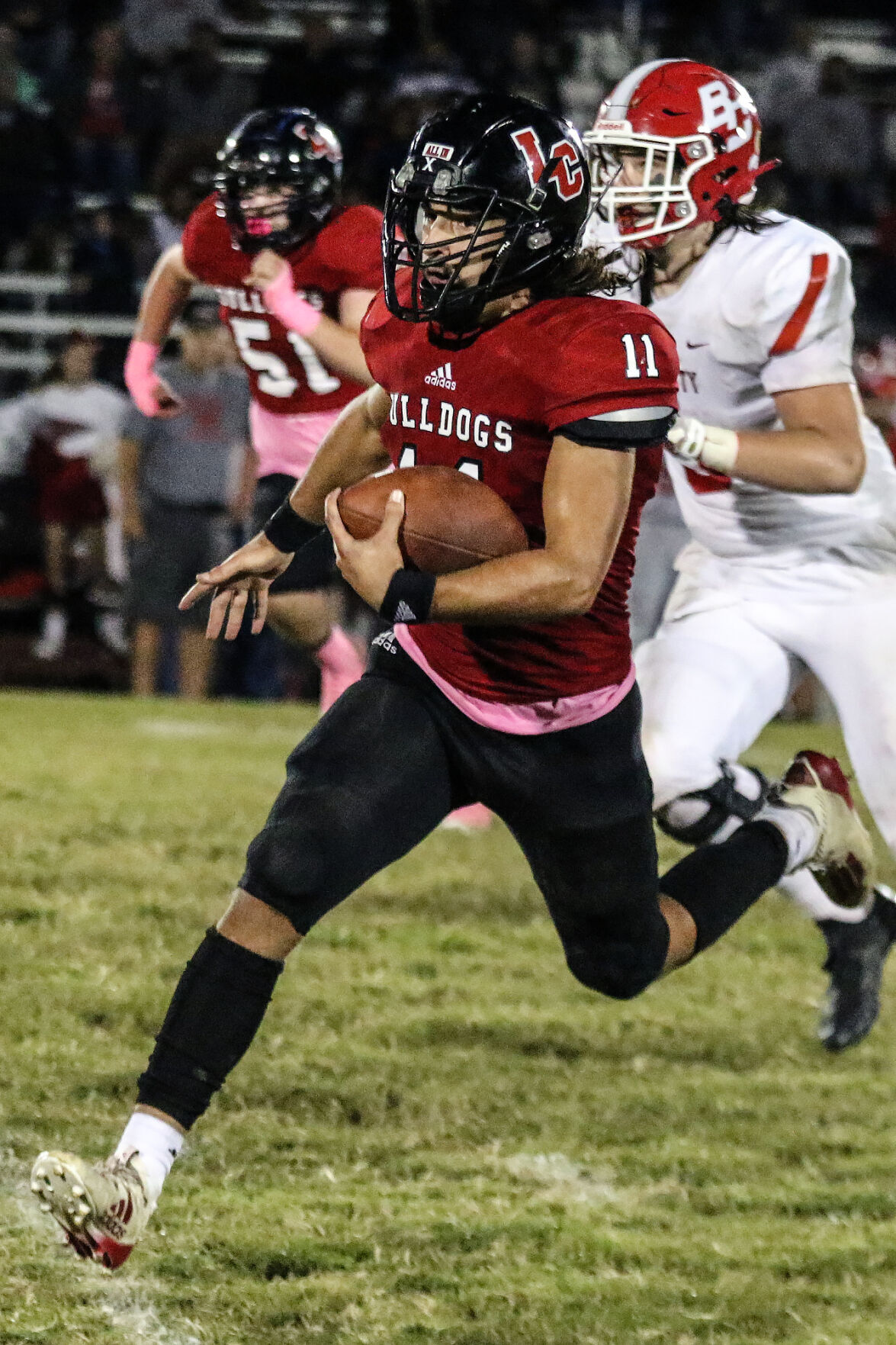 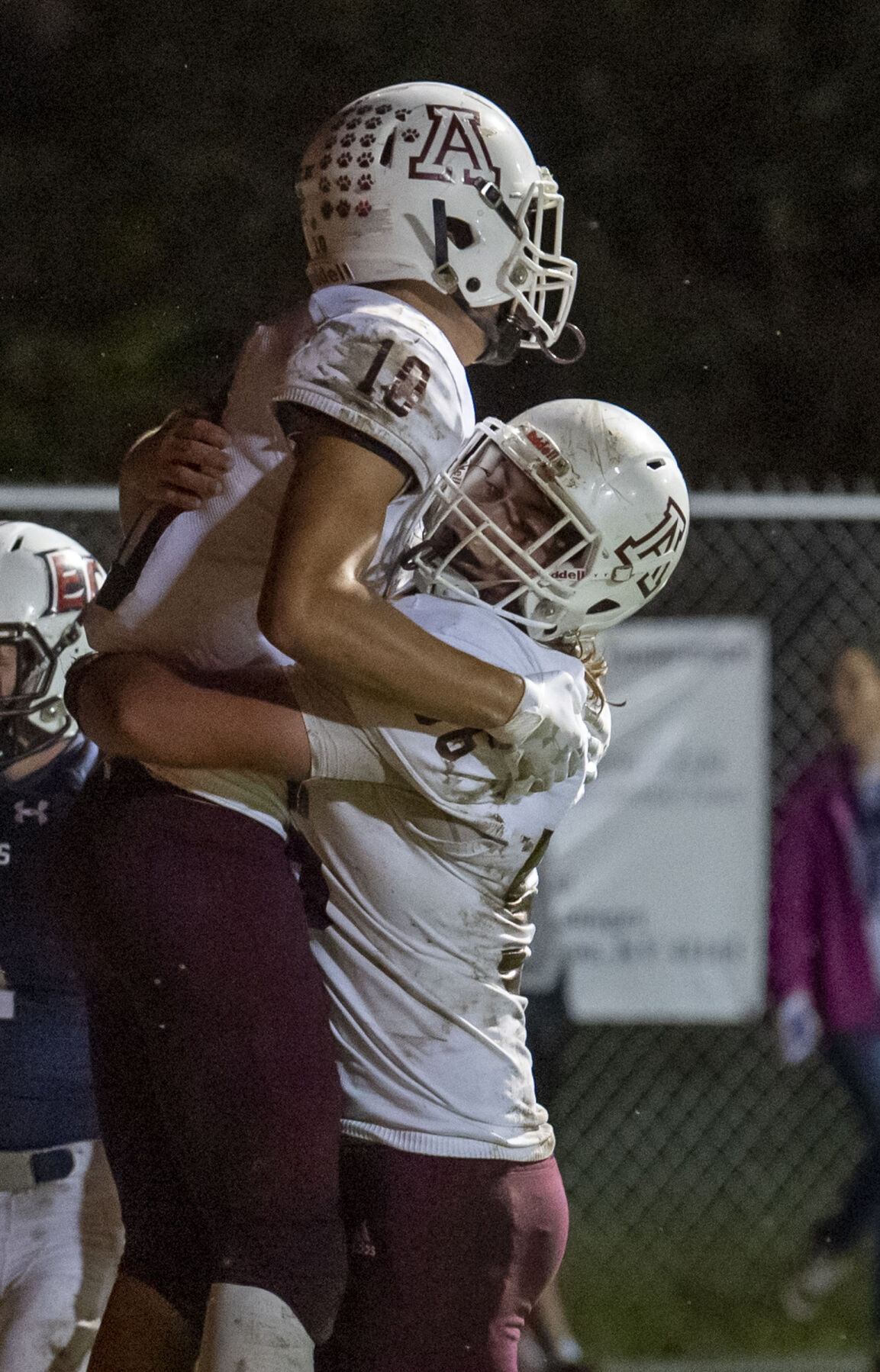 Ashland’s Ricky Padron is lifted into the air by Zane Christian after scoring a touchdown against East Carter on Friday,

Ashland’s Ricky Padron is lifted into the air by Zane Christian after scoring a touchdown against East Carter on Friday,

There are no free lunches and no moral victories in district play, but Ashland and East Carter both found positivity from their encounter in Grayson on Friday night.

The Raiders have never beaten the Tomcats and had not come particularly close to doing so since 1982, when Ashland edged East Carter, 20-15. But the Raiders were within one possession with the ball midway through the fourth quarter Friday.

A month ago, Ashland was 1-3, still learning its roles and laboring under the weight of the mantle of defending state champion.

Would those Tomcats have figured out how to fight off the determined and capable Raiders?

“I don’t know. And I feel like we probably wouldn’t have,” Ashland coach Tony Love said after the Tomcats’ 31-20 win Friday. “But this group comes to work every day. I feel like we’re not even the same team in a lot of ways ... and they’ve got ambition too of doing something special, just like last year’s bunch did something special. It just feels to me like these guys are building some momentum.”

For the Raiders, it was another step toward what Tim Champlin envisioned in 2015 when he took over a team that was winless the year before. Friday was a far cry from the Raiders scheduling a home-and-home with the likes of West Union (Ohio), a club team north of Maysville, in 2015 and ‘16 just to try to get some momentum going.

East Carter found plenty of it and has increased its win total in every season since Champlin took over until the COVID-19-shortened 2020 campaign.

Love has noticed. He’s been around long enough to become Ashland’s second-winningest head coach on Friday night and is in his 28th year on the Tomcats’ staff. He called Friday’s opponent “the best East Carter team I’ve seen.”

On Friday, the Raiders played like it, matching vaunted Ashland big play for big play for three and a half quarters in front of a fired-up home crowd at Steve Womack Field.

“This is what we’ve been building for,” Champlin said. “We’ve built to get in these games and be competitive and find a way to win one.

“I thought our kids gave us a chance in the fourth quarter. We got to the fourth quarter, it was a close ball game, and we just gotta finish in that segment right there. But I think our kids are there in the fact of, they can compete, they’re not gonna back down and they’re gonna line up and play ball with whoever (the opponent) is.”

So Friday felt relevant to more than just one night’s result. The Raiders and Tomcats collected something they hope is sustainable and aim to use it as a springboard — for Ashland, down the stretch of this season; for East Carter, beyond even that, in the sense of program-building.

• Competitive games in Class 2A, District 8 have been few and far between for West Carter since being realigned into that district in 2019. The Comets have yet to lose in 15 district outings during that time and their average margin of victory in those games entering this season was 33.7 points.

West Carter has not experienced the same dominance on the scoreboard this year, but the Comets have kept winning. Against Shelby Valley on Sept. 24, West Carter made a trio of early goal-line stands in an eventual 26-20 victory.

On Friday, Prestonsburg got within six points of the Comets early in the third quarter by turning a blocked punt and recovery deep in West Carter territory into a touchdown.

“They had all the momentum there,” Barker said of the Blackcats, “and our kids’ response to it was really the difference in the game. That set the tone for the rest of the half.”

West Carter shut out Prestonsburg’s Wing-T the rest of the way and added another late Crampton TD in a 41-20 win.

“Being a physical football team, that’s really the only thing you can control,” Barker said. “You can control how physical you are, and our kids really enjoy that.”

The Comets are well aware of their district win string — it stands at 17, counting their final two games in a Class 3A district in 2018 — but focus more on extending it every week than in relishing it, Barker said.

“We talk about it, and they take pride in it,” Barker said, “but ... I think that’s something you think about maybe after you’re done for the year or after you graduate.”

• Lawrence County versus Pike County Central of late is consistently one of the most tightly contested series around. The Class 3A, District 8 rivalry had produced six games with the final margin six points or fewer in eight years leading into the Bulldogs’ trip to Buckleys Creek on Friday night.

Lawrence County’s defense prevented that from being the case on that night. The Bulldogs limited the Hawks’ single-wing offense, ordinarily maddening to defend, to 187 yards on 46 carries and six points in a 42-6 win Friday.

Pike County Central returned ground-gobbling bruiser Matt Anderson and shifty and speedy Tayvian Boykins from the team that ran for 566 yards on 90 carries in two meetings with Lawrence County last season. Bulldogs coach Alan Short credited defensive coordinator Zach Botkins’s game plan against an offense he is familiar with, and his team’s ability to execute it.

“Our kids were on their keys and reads and played very, very physical. Flew around to the ball,” Short said. “I felt like it was probably our best defensive game and quite honestly probably should’ve been a shutout, if we don’t turn the ball over in (Pike County Central’s) territory on our first offensive play of the third quarter.”

With a highly anticipated date with Belfry looming this Friday, Lawrence County didn’t overlook the Hawks the week before, Short said.

“Our kids have been dialed in all year amongst numerous distractions,” Short said. “Just very, very proud of the maturity that our team has shown up until this point.”

• Fleming County’s washing machines couldn’t get all of the Maysville mud out of the Panthers’ white jerseys after a 12-7 win at Mason County on Friday night, so coach Bill Spencer turned to a power washer to get the job done.

That also summarizes how the Panthers picked up their ninth straight victory over the Royals, along with frontrunner status in Class 3A, District 6.

Mason County held Fleming County’s Logan Pinkley, the state leader across all classes in receiving yards per game entering Friday, without a catch, and the Panthers only mustered 11 yards through the air.

“We have seen about every defense you can imagine to limit Logan’s touches this season,” Spencer said. “We have told our kids all season that we are not a one-man show and if (opponents) scheme to take him out of the game, it opens opportunities for others.”

Austin Trent took that to heart. The sophomore ran for 88 yards and a touchdown Friday, providing the first points of the game at the 4:49 mark of the third quarter.

And Fleming County’s defense has alternated excellent performances — allowing six points to West Carter on Aug. 27 — with subpar ones, such as yielding 53 points to Martin County on Sept. 3 and 47 to Rowan County seven days later. Friday’s opponent brought out the best in the Panthers, Spencer said, and it showed in limiting a Mason County team that had scored 34, 43 and 32 points in its previous three games to seven.

“The stakes for this game require you to play great defense,” Spencer said. “The rivalry factor and the playoff ramifications are too high to not play at your best. Our kids, especially our D-line, really answered the challenge.”

Harold Robert Wilson 82, of Huntington, husband of Norma V. Wilson, died Sunday October 17, 2021. He was a US Airforce veteran, and retired from AK Steel. Funeral services will be conducted 2:00 PM Thursday, October 21, 2021 at Chapman's Mortuary. Burial will be in White Chapel Memorial Gard…