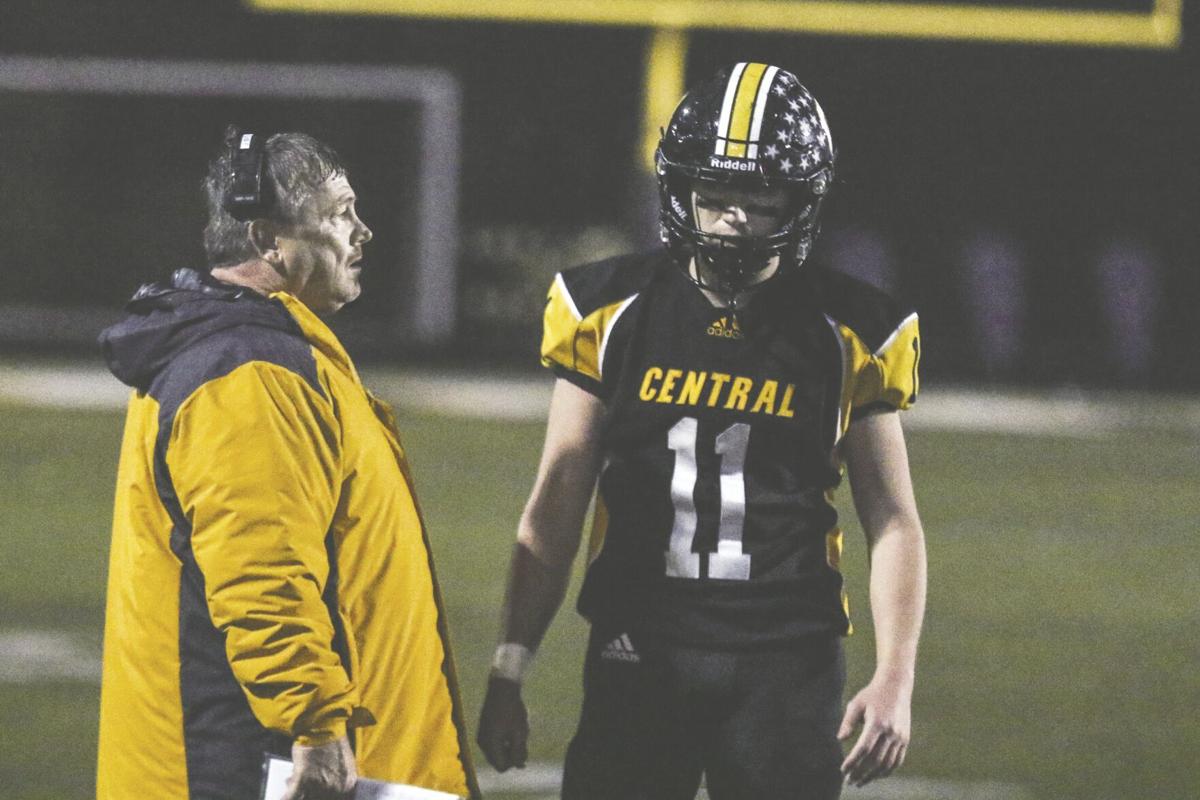 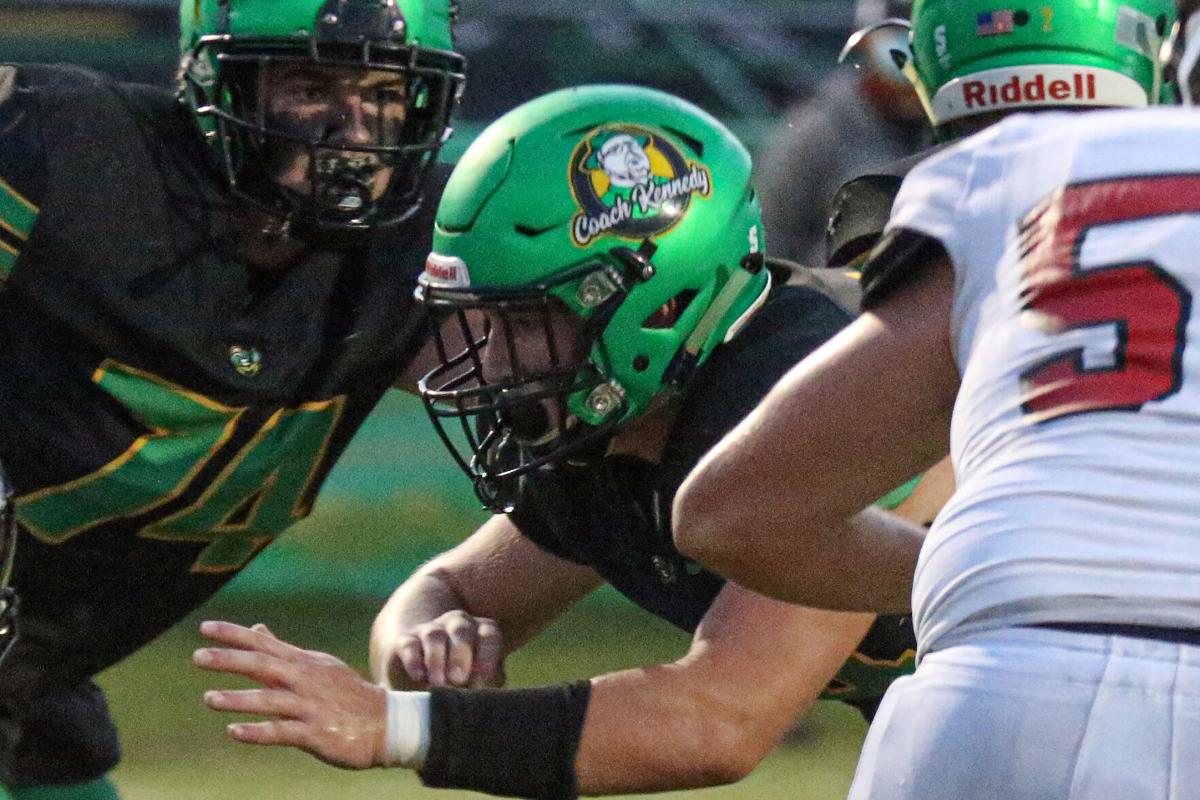 Greenup County’s Mason Sammons plays on Friday night against Lawrence County. All the Musketeers wore a logo bearing the image of late offensive line coach Jamie Kennedy on their helmets, and coaches wore T-shirts with the logo on the back. 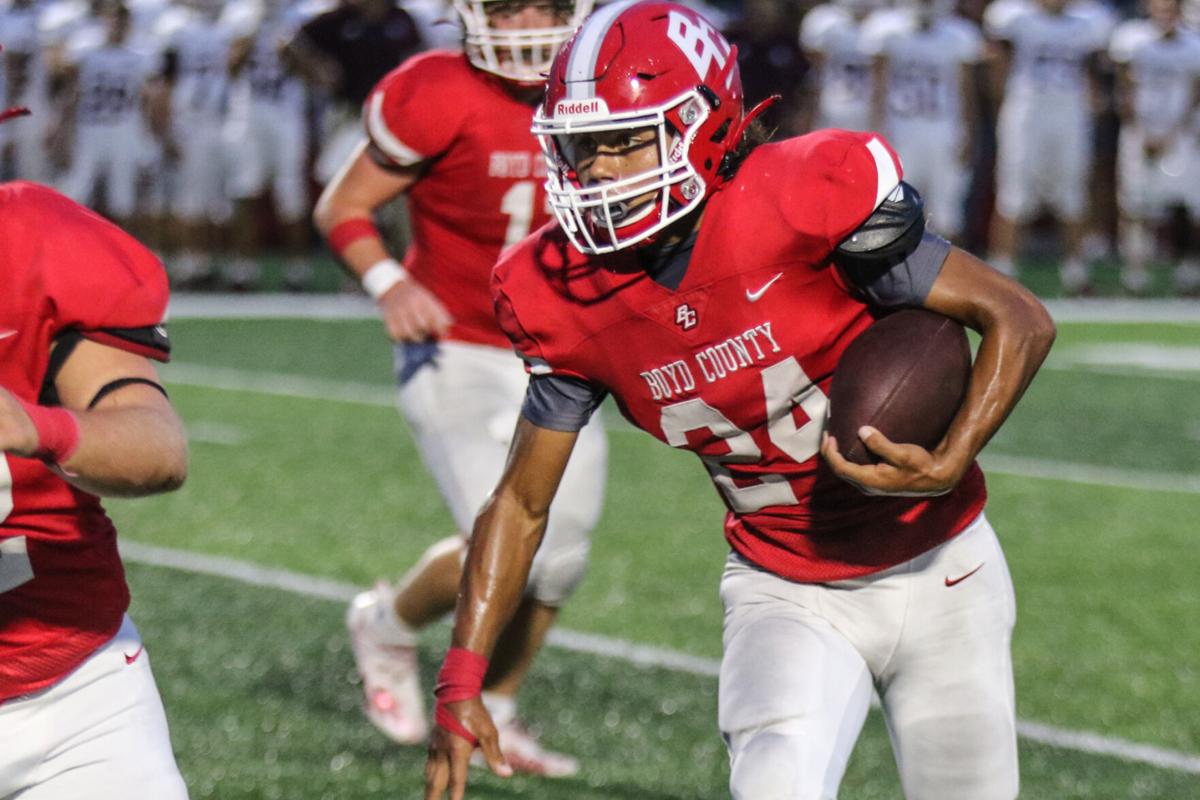 Boyd County’s Camaron Collins looks for a lane to run the ball during Friday’s game against Ashland. MATT JONES | THE DAILY INDEPENDENT

Greenup County’s Mason Sammons plays on Friday night against Lawrence County. All the Musketeers wore a logo bearing the image of late offensive line coach Jamie Kennedy on their helmets, and coaches wore T-shirts with the logo on the back.

Boyd County’s Camaron Collins looks for a lane to run the ball during Friday’s game against Ashland. MATT JONES | THE DAILY INDEPENDENT

That has created an “outpouring of emotion,” as Johnson Central athletic director Tommy McKenzie put it, as the Golden Eagles’ football coach is battling significant health problems.

“He’s become a staple here, not just the high school but in our community,” McKenzie said. “You can talk to local restaurant owners and so forth, and they’ll tell you the same thing: people notice when he’s not around.”

Matney is indeed nearly revered in Paintsville — at least on the gold-and-black side of Paint Creek — but not especially popular in certain communities outside it. From our perspective, that is because in building Johnson Central’s program and Sheldon Clark’s before it, Matney has done what he thought best for his players and program without worrying much about how that would be perceived, outside the circle of players, coaches and fans who congregate around him on the field after every game.

That was put aside this week, if social media are any indication, with dozens of teams and coaches posting messages of support for Matney in his fight.

Most of that followed a prayer vigil for Matney at Eagle Field on Sunday. By that time, he’d been in the hospital for about a week and a half.

McKenzie suspected something was up with Matney as early as Aug. 24, when he watched oldest son Dalton and Johnson County Middle School play Louisa Middle — primarily from his van.

“Coach Matney and his family, they’re extremely private people,” McKenzie said. “He’s not gonna say, ‘I’m sick,’ or they need help, or anything like that, but I could tell then he wasn’t feeling great.”

That was confirmed the next day. McKenzie thinks the death that Wednesday of Jamie Kennedy — a former Golden Eagles assistant under Matney who was coaching at Greenup County at the time of his passing — played a part in convincing Matney he needed to go to the hospital.

McKenzie did not confirm the exact nature of Matney’s medical situation on the record.

Matney, based on a Facebook update from sister-in-law Janette Jude, may be making some progress. Jude wrote Monday that, while Matney was heavily sedated and on a paralytic, the amount of extra oxygen he needed was bumped down from 80% to 50%.

Jude posted Tuesday that there had been no change from Monday.

“Today the nurse said we were in for a long haul,” she said. “We will gladly take a long haul. ... The prayers of the righteous avails much. We ask for those prayers.”

In the meantime, Johnson Central is slated to host Cahokia (Illinois) on Saturday afternoon.

“I think that the ability of his coaching staff to pick right up and keep on in the midst of all this is a testament to what he’s built there,” McKenzie said of Matney. “It’s a total group buy-in process. ... What’s driving them most right now is him. They don’t want to let him down. And that’s the sign of a good leader.”

• T.J. Maynard has likely dealt with more than his share of heartache as a football coach.

When Tony Kershner, the grandfather of Russell junior receiver/defensive back D’Marques Kershner, died on Friday at the Red Devils’ game at Wheelersburg, that made four active Maynard players in 11 years who have lost their father or father figure.

Maynard doesn’t see that as an unfair burden, though, he said.

“You’re put in a position for a reason, so maybe that’s what we’re here for, to help these young men,” Maynard said, speaking through his emotion. “We’ve got a great coaching staff, a lot of great men that can help D’Marques, and he can lean on those guys for guidance.”

Tony Kershner was the starting noseguard on Russell’s 1978 state championship team and also interestingly played a key role in the renovation of Putnam Stadium in 2014.

Maynard remembered him for his dedication to family, which included the desire to help his grandson improve.

“Tony and Dawn pretty much raised D’Marques and his two sisters,” Maynard said. “Tony was a big D’Marques fan. Really proud of him, but one thing about Tony, he was always wanting to talk football about D’Marques, but he also would tell you what he needed to do better. He wasn’t one of those guys that, everything D’Marques did was perfect. It was, ‘He needs to do this better, coach.’ We’ll miss those conversations.”

Raceland’s Adam Elkins lost his father, Morgan, during a game at Pikeville in 2011. Maynard remembers learning of the death of Sammy Smith’s dad, Sam, right before Russell team camp began in 2014, and Reed Galloway’s father, Todd, had a medical episode while setting up for the Red Devils’ postseason banquet in January 2018 and died soon thereafter.

“Unfortunately, I’ve been through this before,” Maynard said. “Hopefully we can take some of the things that we learned from there to help ease the pain of this family.”

Maynard said D’Marques Kershner, who recovered an onside kick on Friday, is “day-to-day” ahead of the Red Devils’ game Thursday at Lawrence County.

In the meantime, the Red Devils have sought to embrace him.

• Jamie Kennedy won’t be on the field with Greenup County this fall, at least not in person.

The image of the Musketeers’ late offensive line coach, who died Aug. 25, won’t be hard to find, though. Greenup County is wearing a helmet decal featuring a logo with Kennedy’s image and the wordmark “Coach Kennedy.” On Friday, the Musketeers’ coaches wore green T-shirts with the same logo prominently visible on the back.

Moore passed it along to the Musketeers’ decal and T-shirt companies, and the apparel was ready for Friday night’s home game against Lawrence County.

“Just so appreciative of everybody that helped us expedite the process to get the stuff out here,” Moore said, “because it really does help the kids and the people in the school to start healing.”

• Boyd County entered the season riding momentum from a first-round playoff victory last year, but needing to replace a sizable portion of its offensive production due to graduation.

Three games into their Lions careers, Camaron Collins and Rhett Holbrook are well on their way to helping plug those gaps.

Collins has rushed for 409 yards and four touchdowns after a 157-yard, two-TD performance on Friday night at Lewis County. Not even halfway into September, Collins has thus already set Boyd County’s record for rushing yards by a ninth-grader. David Caldwell ran for 362 yards and five scores as a freshman in 1990.

“Whenever you have that kind of speed, I don’t care how old you are, you’re gonna be a pretty good player,” Lions coach Evan Ferguson said of Collins. “He runs hard, not just fast, and I think that goes a long way. ... If he gets a sliver of space, he can go.”

Holbrook passed for three touchdowns without an interception on Friday in Vanceburg and threw for 99 yards, second-most for a freshman in program history. He also rushed for two scores.

The five TDs accounted for ties Holbrook’s effort for second-most in the Lions’ record book, along with nine other performances, most recently Logan Staten’s last year.

Holbrook and Dakota Thompson have split quarterback duties for Boyd County so far. Their skill sets are different, which has enabled the Lions to use both situationally.

“(Holbrook) had done really well in backup duties, so I need to give him some more chances,” Ferguson said, “and Dakota Thompson is one of our harder runners, so I wanted to try to use him in different ways, too.

“Rhett is just an athlete. He runs out there like he probably should be a little more nervous or scared than what he is, but he is not in any way nervous. He just plays.”