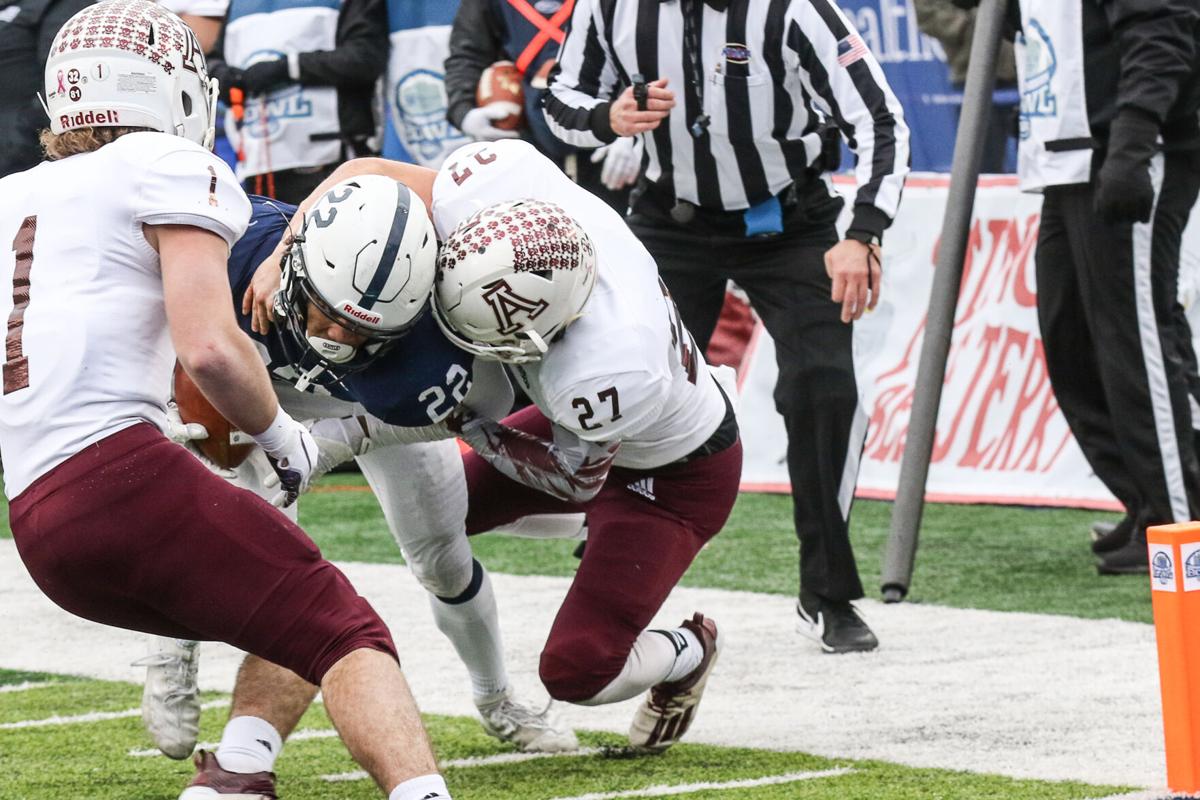 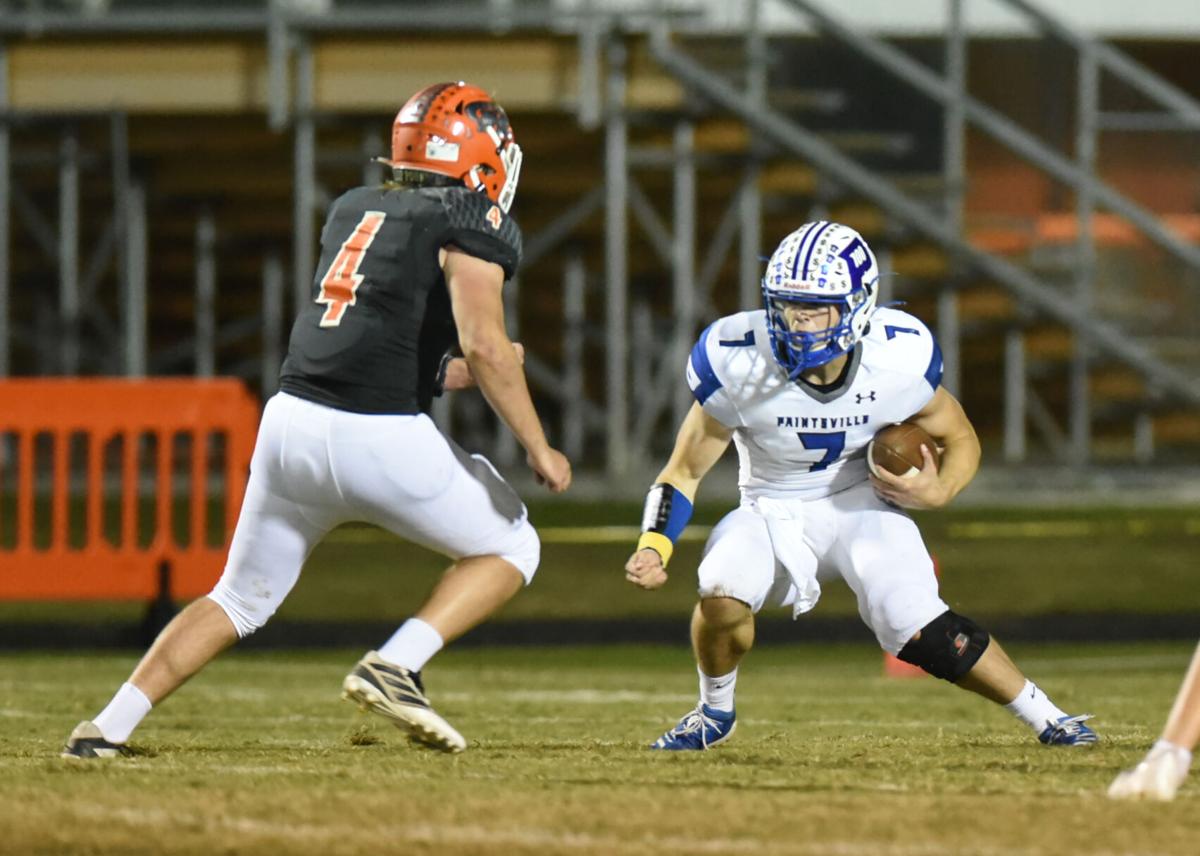 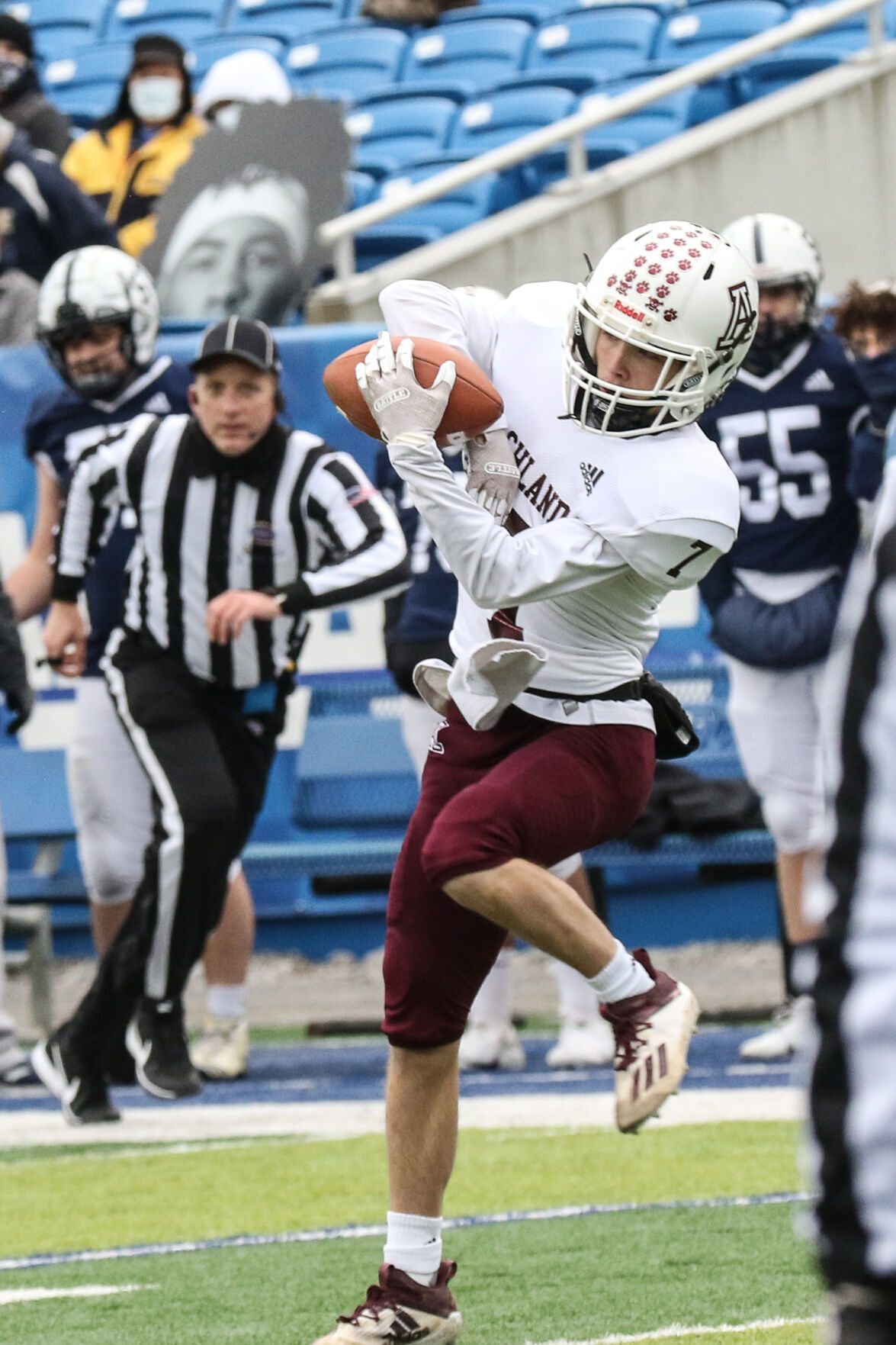 Three Ashland Tomcats and coach Tony Love stood in a concourse just off the Kroger Field playing surface on Saturday afternoon at a press conference after winning the Class 3A state championship game. Christian had been asked what Ashland’s focus was against explosive Elizabethtown.

“We just had to come out there and smack them in the mouth,” Christian said, “and show them what eastern Kentucky football is like.”

That’s the line that lit up Pittman’s face. He had reason to be joyful — he’d rushed for 253 yards, the most of anyone in the six state finals played on Friday and Saturday, and three touchdowns.

The second-greatest ground total of the weekend belonged to Paintsville’s Harris Phelps. He ran for 221 yards.

Pittman and Phelps did it by running hard and skillfully behind stout offensive lines. The Tomcats and the Tigers also recorded the top two team rushing totals, at 415 and 303 yards, respectively.

And Ashland and Paintsville shut down the accomplished rushing games of their opponents, too.

Elizabethtown picked up 84 yards on the ground on Saturday against the Tomcats — partially a function of the Panthers’ heavy reliance on their passing game once they got behind and it became apparent Ashland’s ball-control offense intended to drain the clock, but certainly also a measure of how sound the Tomcats were defensively. Elizabethtown had averaged 224 rushing yards per game coming into the state final.

And Kentucky Country Day rushed for 151 yards on Friday versus the Tigers. The Bearcats’ single-wing offense had averaged 228 yards per game on the ground before meeting Paintsville.

If that’s the hallmark of eastern Kentucky football — the fundamental focus on the game’s most basic elements, running the ball and stopping the run — consider it successful on the state’s biggest stage on this particular weekend. Ashland and Paintsville have the hardware to prove it.

Love tipped his cap to Johnson Central and Belfry, two longtime combatants of the Tomcats who have built state-level elite programs on those principles and in doing so brought respect to programs from the eastern part of the commonwealth. He sees another angle of why it’s significant that Ashland proved it’s back in that company with its first ring in 30 years.

“In terms of trying to get kids looked at to play college football, you have to have that respect from a lot of people,” Love said, “and the only way I can figure out to get that consistently is to get to this game and to win it, and show out, and not just win it, but win it in Tomcat fashion.”

Love meant with muscle and grit. On this weekend, he spoke not just for a program, but for a region.

• Keontae Pittman got the MVP award in Saturday’s Class 3A state final and deserved it. The Kentucky Football Coaches Association Class 3A Player of the Year ran for 253 yards, and Elizabethtown couldn’t stop him in big moments.

But senior Hunter Gillum has a case for most impactful player in that game. He ran for 115 yards and two touchdowns. The yardage total was a season high and his house-call count matched a season high.

Gillum played the role of what Tomcats coach Tony Love called a “counter-punch guy” to the heavily respected playmaking ability of Pittman and JT Garrett.

Early in the game, Ashland sent its speedy duo out wide and put Gillum in the backfield. A week earlier against Belfry, the Tomcats deployed Garrett time and again on jet sweeps, the most they had all season, Garrett said then.

With Elizabethtown forced to account for the possibility of Garrett or Pittman continuing that, and indicating it would go to great effort to do so every time one of them went in motion before the snap, Gillum went to work.

“We just worked into this formation a couple weeks ago and started seeing how defenses were really stressed to stop JT and KP on jet sweeps,” Love said. “So it just opens up a lot. You go back to a pick-your-poison mentality. And Hunter is enough of an athlete he can make you pay, and he absolutely did.”

• Paintsville’s victory over Kentucky Country Day on Friday afternoon helped the Tigers claim a credential no other school their size has.

Paintsville’s accomplishment in winning what former Tigers coach and current Paintsville mayor Bill Mike Runyon called “the majors” is rare among KHSAA members of any size, not just in its smallest classification. Paintsville is the 13th school to win titles on the gridiron, the court and the diamond. It’s just the second to do so east of the Lexington and northern Kentucky metropolises — the other being Ashland.

The profile there, of course, is large schools in urbanized areas west of Appalachia. So Paintsville did Friday what no other school quite like it has done.

• The Northeast Kentucky Football Officials Association has named PD Harris the first winner of the Bob Kouns Award, a new honor for the top official in the area, assigning secretary Brian Taylor said.

“PD is a 20-year official in northeast Kentucky and continues to work all levels of football from Junior Football League to NCAA Division II,” Taylor said. “PD is a great official. ... He is active in mentoring young officials as well as teaching a great respect for the game.”

The winner is chosen with input from area coaches, officials, and Taylor in his role as supervisor, he said.

The honor is named for one of northeastern Kentucky’s longtime legendary officials. This is Kouns’s first year of retirement, Taylor said, after officiating for more than 50 years.

“Bob has a high level of respect from officials, coaches and fans,” Taylor said. “Through this award, Bob will continue to be a part of our association for many years to come.”

In other news from the stripes, area officials Jeff Adkins, Dave Anderson and Brett Ritchie worked the Class 2A final on Friday night, won by Beechwood over Lexington Christian in overtime, 24-23.

Four: Keontae Pittman (Ashland). The Army commit put up 253 yards and three touchdowns on the ground en route to game MVP honors in his final outing in the Tomcats’ white and maroon.

A couple of programming notes: fear not, those who have patiently waited for fall sports All-Area content. Those will begin running one per day in Thursday’s section. Volleyball, boys and girls soccer, boys and girls golf, boys and girls cross country, and large school and small school football All-Area coverage is on the way!