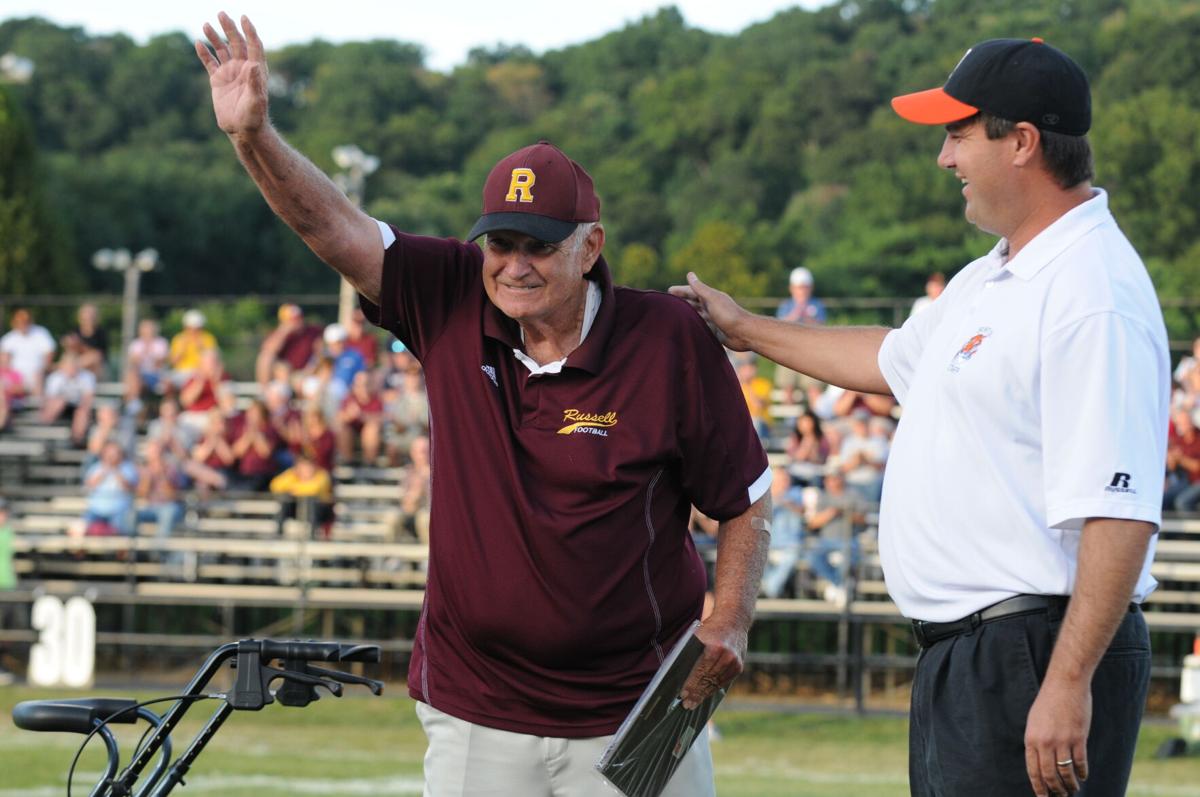 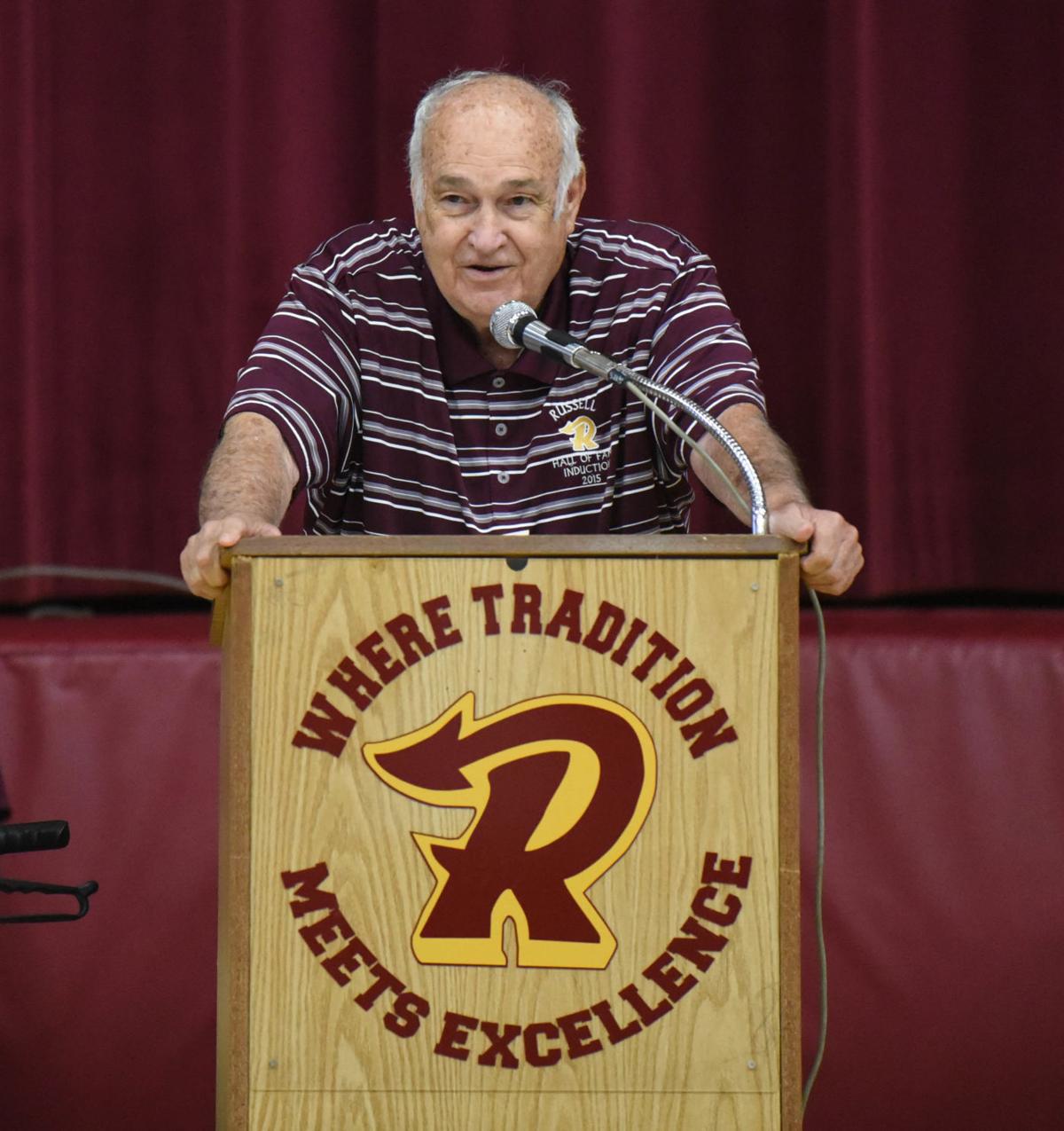 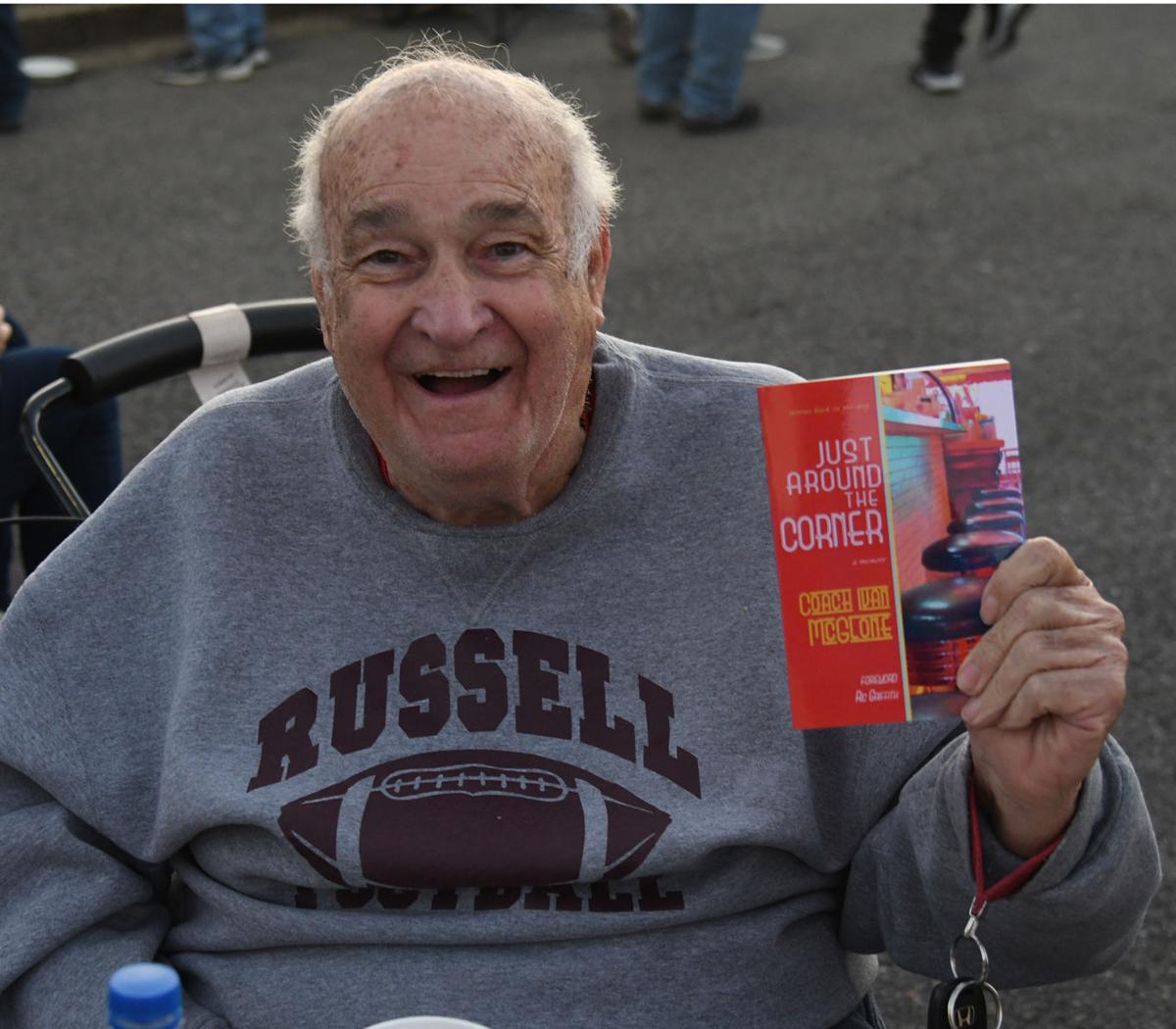 Former Russell head football coach and legend Ivan McGlone was on hand to autograph his book "Just Around the Corner" before the Red Devils played now district rival Ashland in Flatwoods on Friday. KEVIN GOLDY | THE DAILY INDEPENDENT 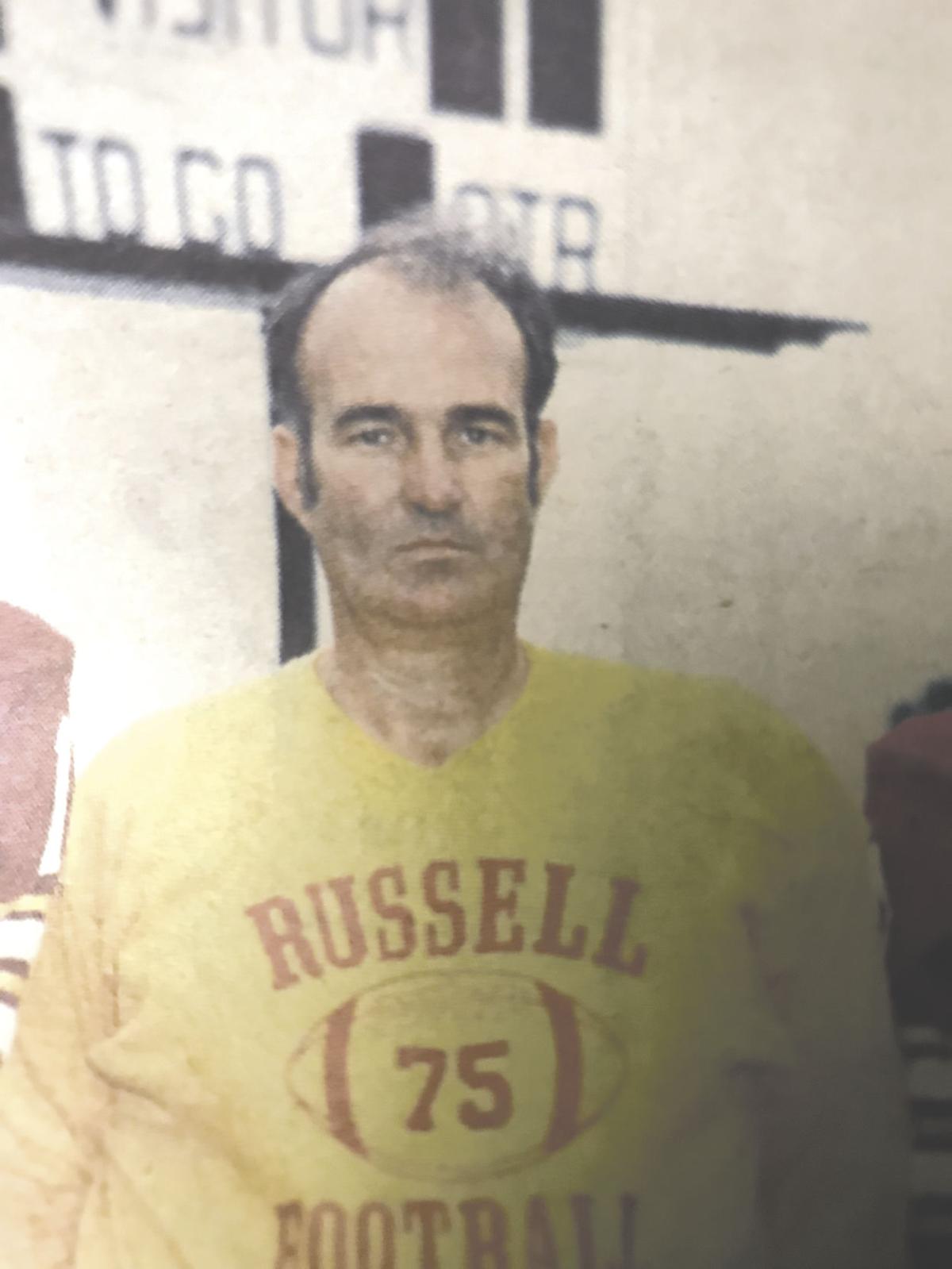 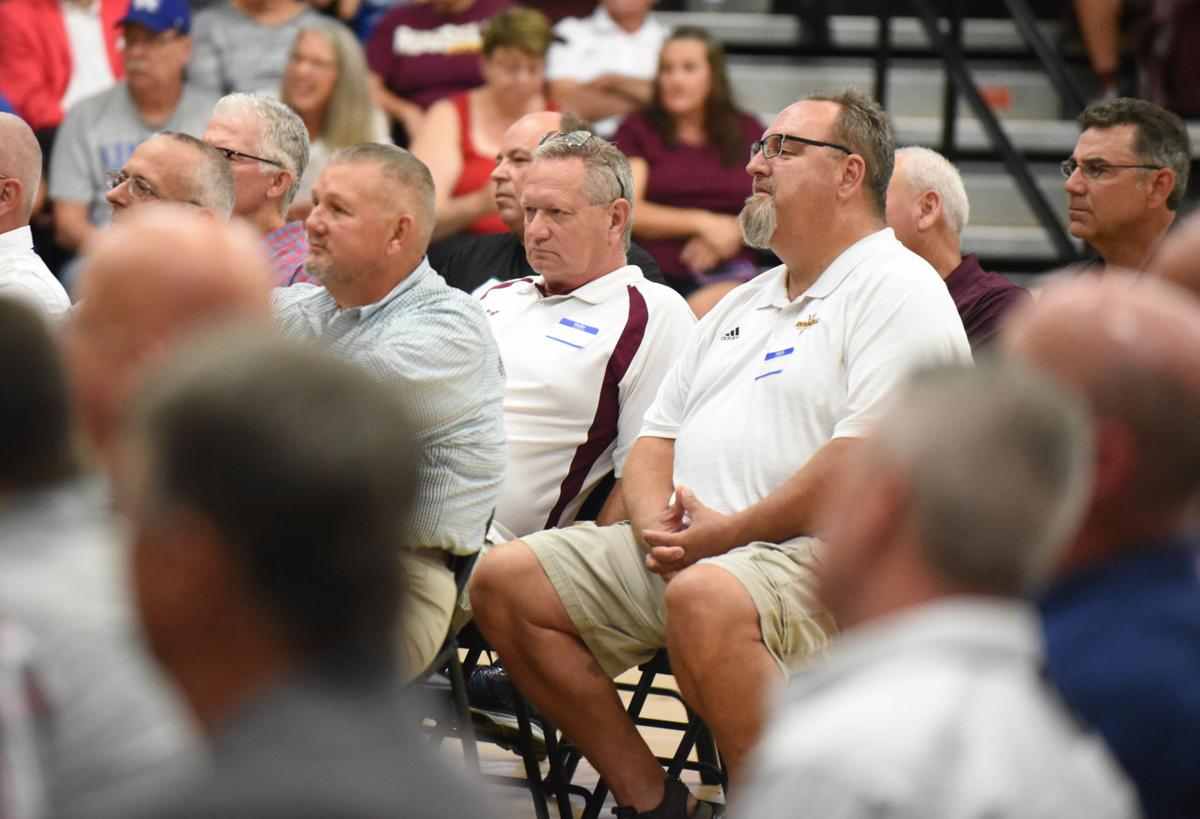 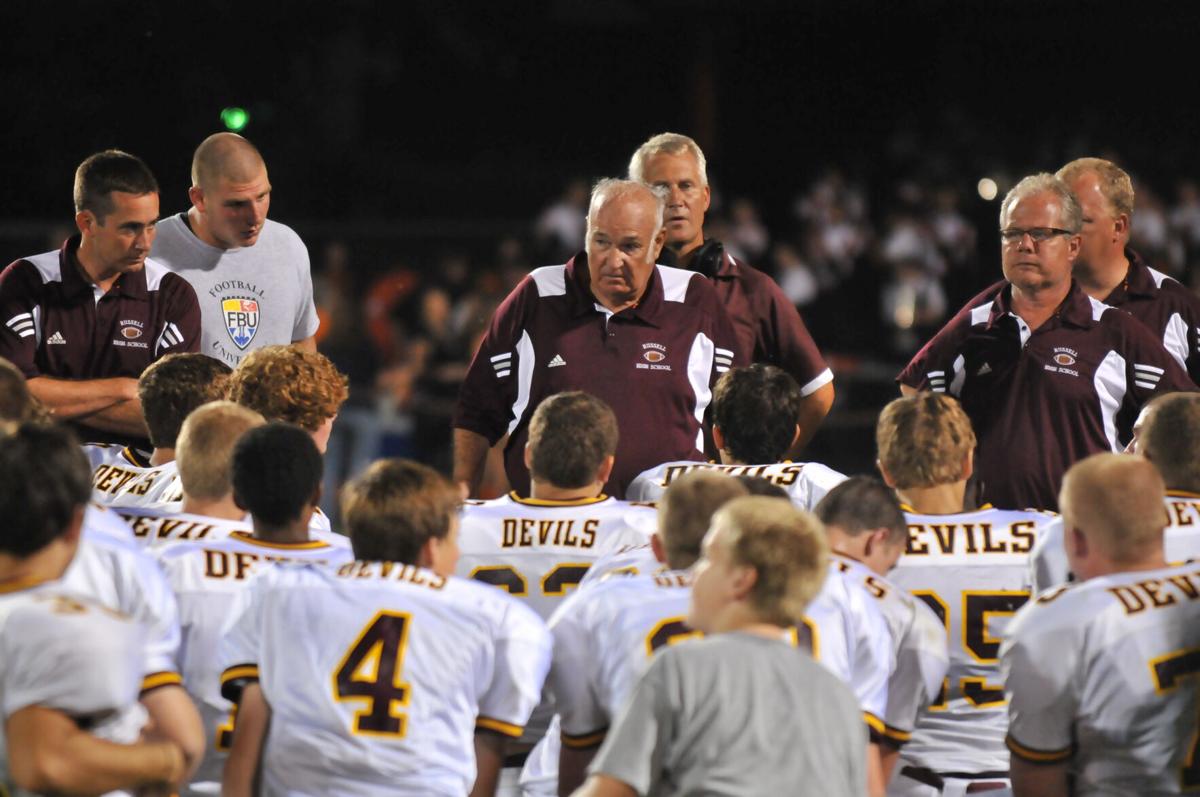 Former Russell head football coach and legend Ivan McGlone was on hand to autograph his book "Just Around the Corner" before the Red Devils played now district rival Ashland in Flatwoods on Friday. KEVIN GOLDY | THE DAILY INDEPENDENT

High school football teams coached by Ivan McGlone were victorious on 344 occasions across 43 seasons. Oct. 14, 2011 was not one of them.

That was the date of one of Russell's most unexpected losses, perhaps, ever, a 14-7 home setback to Lewis County.

The Lions fielded one of their best teams in school history and won the Class 3A, District 6 title that night at Russell, but for context, at that time the Red Devils had played in the state semifinals four times since the last time Lewis County had even had a winning record.

No sulking. No disrespect. No blow-by handshake.

"He had a big smile on his face," Hughes, then the Lions' coach, said of McGlone. "His hand was out as we were meeting there at the center of the field. I think he was genuinely happy for our kids. Everything he said was positive."

McGlone, a Hall of Famer who won 64 more games at Russell and Vinson (West Virginia) than the next-winningest northeastern Kentucky coach, has died at age 82.

But those who played and coached for and against McGlone don't only remember his prodigious win total or his turnaround of the Red Devils' program that won four games in its first season under McGlone in 1976 to a state championship just two years later.

"He is Russell football," said Garry McPeek, one of McGlone's former players and assistants who went on to lead East Carter and Greenup County against him.

T.J. Maynard played on the line for McGlone's Red Devils, graduated in 1988 and parlayed that into a spot on Kentucky's roster. He later coached Greenup County and Raceland against his mentor before succeeding him at Russell in 2014.

"I think everybody always talks about, who wants to be that guy to follow him?" Maynard said. "I embrace that. Not from the standpoint of thinking I knew more than Coach, but I knew the work and the time that he put into this program to develop what is now known as Russell football."

That is to say, one of the top programs in northeastern Kentucky and one that is respected across the state.

Russell had had a handful of respectable seasons in its history when McGlone came over from Vinson, but the Red Devils had never even qualified for Kentucky's playoffs, which at the time required winning the district championship. Russell did that for the first time in McGlone's second season and claimed its first of two state titles under McGlone in his third year, in 1978. The Red Devils added another in 2005.

Russell did it with the Wing-T offense that became synonymous with McGlone's name, as well as an aggressive defense and a deep and stable staff of assistant coaches.

The Wing-T forced opponents to be patient and disciplined. Otherwise, its deception, unique blocking angles and adaptability would spring open lanes for the Red Devils' backs to befuddle would-be tacklers who had overpursued.

"Every year we played them," said Ashland coach Tony Love, who as a longtime assistant schooled Tomcats defenses against Russell for many years before one matchup with McGlone as head coaches, "the challenge to read your keys and be able to handle the detail that coach McGlone had in his offense was one of the hardest things to get your kids dialed in and able to do."

McGlone remained a Wing-T scholar even after he left the Russell program. McPeek tapped into that knowledge as an assistant coach at Lafayette in 2016 the week before the Generals met Wing-T-operating Scott County in the Class 6A state semifinals, and again in 2019 when Frederick Douglass, where McPeek was athletic director, prepared to play the Cardinals.

"We called (McGlone) every single day," McPeek said. "We had to teach him how to FaceTime, and so we FaceTimed and he shared a bunch of ideas how to slow the Wing-T down. Very sharp, very bright, and (had) the utmost respect."

McPeek, now the offensive line at Valdosta (Georgia) who is in his 31st year in coaching, said he patterned his teams after McGlone and Russell. His gratitude goes deeper than that.

"I would've never gone to college or gotten a degree if I didn't play football," McPeek said, "That's just a small part of one person, but what has he done over 38 years (at Russell)? ... All fond memories, from how to tie a tie to how do you get into a school to how to be a man and how to work."

Love is one of only four northeastern Kentucky head football coaches who is still in the same position as he was in McGlone's final year, in 2013 -- a nod to McGlone's longevity in an industry in which that is increasingly more rare.

"There are legendary coaches that I've coached against, with (former Ironton) coach (Bob) Lutz, (Belfry) coach (Philip) Haywood, (Bell County) coach (Dudley) Hilton and coach McGlone, that really challenge you because you know that if you can find a way to win against a legendary coach, you've really elevated your program to a point that gets noticed," Love said. "I don't know how they can do it for the amount of years that they've done it, and you look at as a head coach the amount of time and energy and sacrifice and issues that you deal with on a daily basis.

"I've thought about that a lot lately," Love continued. "It really is pretty impressive to think how they could go decade after decade and still continue to perform and coach at the highest level that they do."

Even that had to come to an end for McGlone, though, who departed the program -- he said at the time it was not his idea -- after the 2013 season.

Whatever hurt feelings that might have engendered mellowed over time, to the benefit of all parties, Maynard said.

"There was a little bit of a tough transition for him," Maynard said. "To put your heart and soul into something and then have it taken away, obviously that's tough, but it shows the character of the man. He was able to come back out to the games. ... As the years got on, he couldn't stay as long, but he would still make an effort to be here."

McGlone consulted with Maynard a few years ago on a Wing-T package to complement the spread offense Maynard favors. It got McGlone back around the game field that bears his name and the practice field christened in memory of his first wife, Gloria, who died of cancer in 2012.

"Not only was that a benefit for us, I think it benefited him," Maynard said, "because he still felt important and had a connection to the program."

"When considering coach McGlone, I think of the man," Russell athletic director Joe Bryan said, "a man with the laugh that took over the room. It did not matter what kind of mood you were in or how you were feeling before you saw him, if Coach was laughing, you were laughing. His enthusiasm for life and the stories he told about it drew you in and immediately made your day."

McGlone had been in declining health in recent weeks, Maynard said, and entered hospice last weekend. That engendered reflection for the many players and coaches McGlone encountered.

"If you watched Coach grow over the years -- I played for him, shoot, 30-some years ago," Maynard said, "to watch him grow as a coach, we know how great he was at Xs and Os, but how he changed and developed over the years in his relationship with his players, I think you would see as he grew older he kinda got the gist of everything and he was just such a great person to be around."