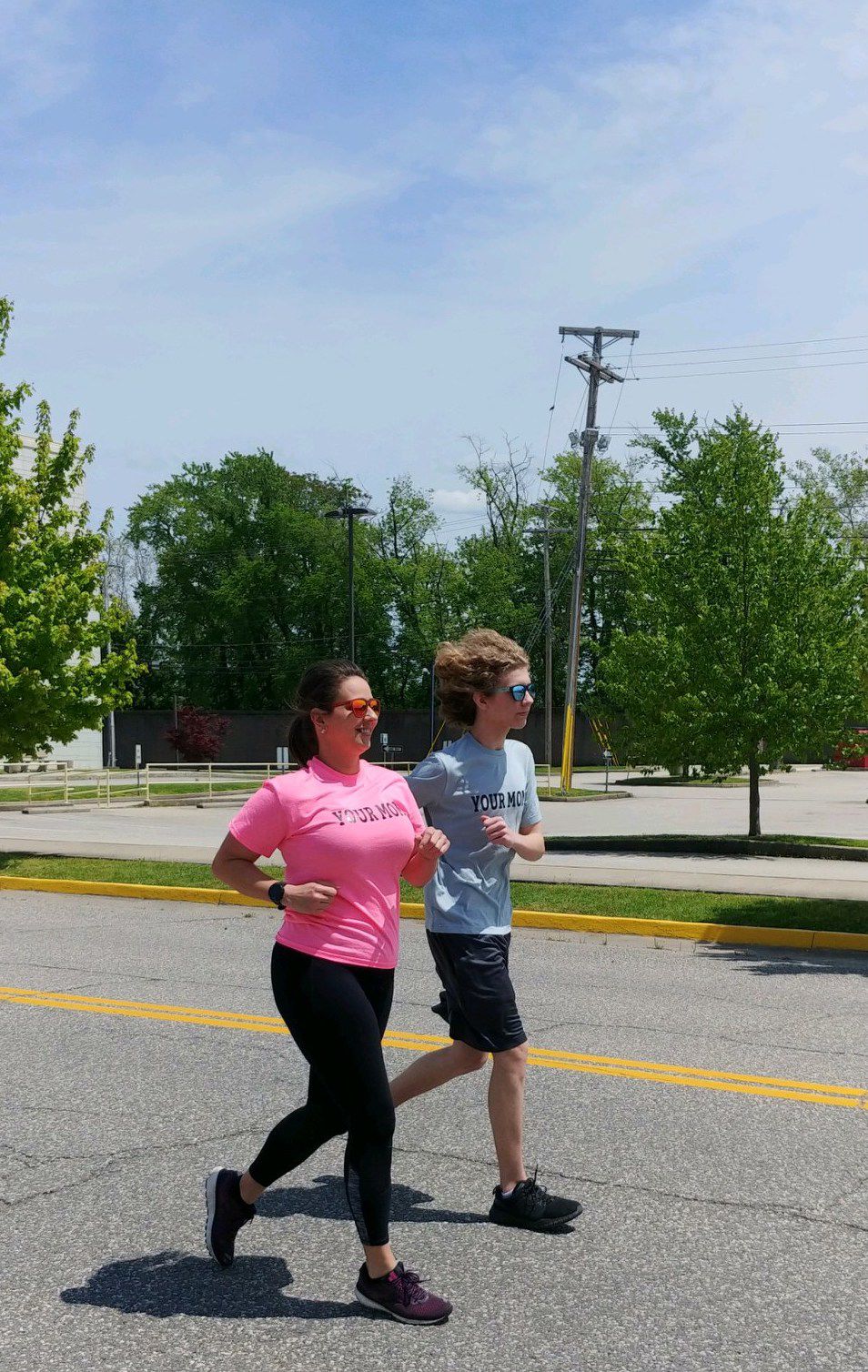 From left, Leah Wheeler and Colby Elliott compete in the Mother's Day Virtual Hug 5K in Catlettsburg on Sunday. The event included runners and walkers competing in Ashland, Catlettsburg and Ironton while satisfying social distancing directives. 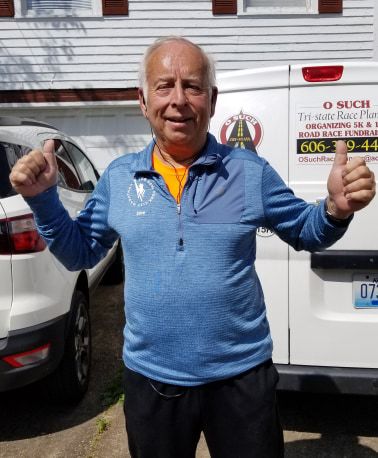 Alan Osuch poses after completing his race on Sunday. 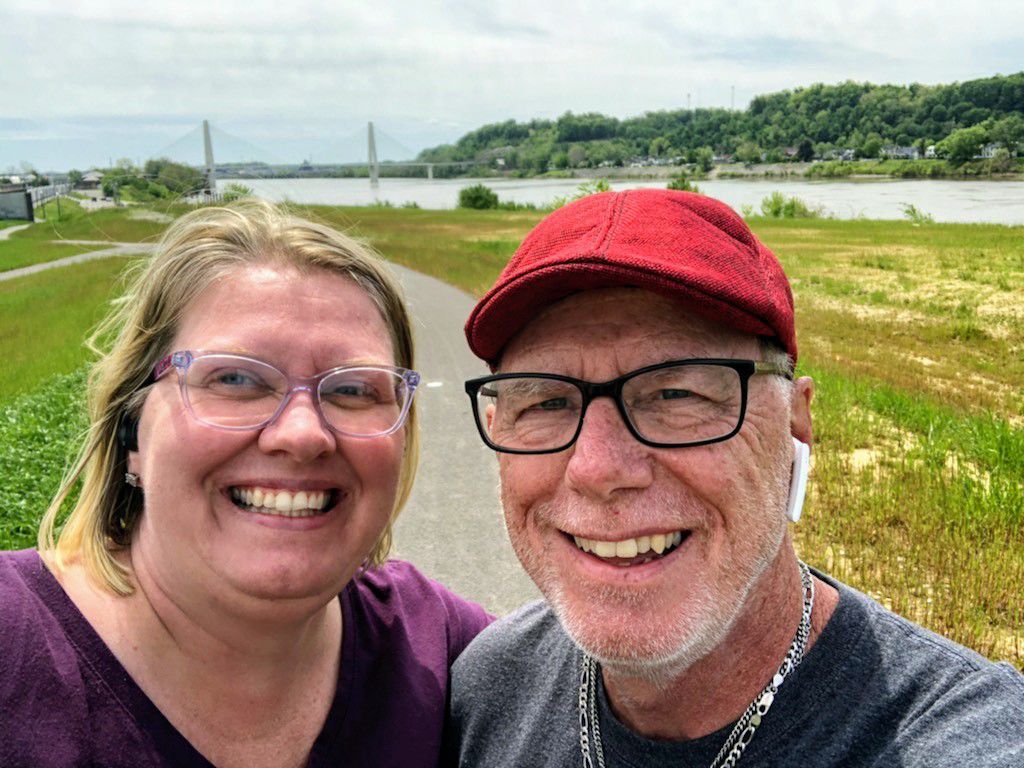 Amy Stephens, left, and Jim Cremeans pose after the father-daughter duo walked in the Mother's Day Virtual Hug 5K in Ironton on Sunday.

From left, Leah Wheeler and Colby Elliott compete in the Mother's Day Virtual Hug 5K in Catlettsburg on Sunday. The event included runners and walkers competing in Ashland, Catlettsburg and Ironton while satisfying social distancing directives.

Alan Osuch poses after completing his race on Sunday.

Amy Stephens, left, and Jim Cremeans pose after the father-daughter duo walked in the Mother's Day Virtual Hug 5K in Ironton on Sunday.

“But I miss my running family,” the 61-year-old Ironton man said Sunday.

Cremeans, the assistant director and pastor of Ironton City Mission, was part of a sizable slice of Greater Ashland’s bipedal brigade that reunited – yet were socially distant. They didn’t surrender to the COVID-19 pandemic this weekend because they hit the streets for the annual Mother’s Day Virtual Hug 5K race and traversed routes in Ashland, Catlettsburg and Ironton.

“It’s keeping the running community connected in a time that’s very difficult for people to be together.”

There were as many reasons for running and walking this weekend as runners and walkers. Cremeans walked a course through downtown Ironton with his daughter, Amy Stephens.

Sunday was Stephens’s first virtual race. She and her dad finished in 58 minutes, 30 seconds.

“It was good,” Stephens said. “We did our own pace. There was less pressure.”

Cremeans remembered his mother, Mary Cremeans, on Mother’s Day for her godliness.

“She lived a godly life in front of us, and she raised us that way,” he said.

Ashland resident Leah Wheeler and her son, Colby Elliott, a sophomore-to-be at Boyd County High School, traveled through downtown Catlettsburg and along a floodwall. Wheeler ran alone and finished in 32:06 and re-walked the course with Elliott, who finished in 1:03.00.

Monday was Elliott’s 15th birthday, and Wheeler continues to recover from her third knee surgery in January.

“It’s something I’m doing for Mother’s Day,” Elliott said. “I’m not very active; I might feel it later.”

Wheeler has been running for nearly three years.

“My son and I started together to lose weight,” she said. “We started walking, we heard about one of the 5Ks, it was for women with cancer. … We decided to try it, and it went crazy from there.

“It’s addictive; once you get started doing the race, you can’t seem to stop.”

Wheeler has torn the anterior cruciate ligament (ACL) in both of her knees and had to stop rehabbing when her facility shut down. She’s endured three ACL surgeries, necessitating the latest one during the Marshall University Marathon last November.

Gussler, whose husband is Ashland ophthalmologist Dr. Carter Gussler, and their daughter Claire ran Saturday. “We ran slow; we did it in 30 minutes,” Theresia said.

Race organizer Alan Osuch said about 150 runners and walkers competed and raised nearly $500. He said the money would be divided among Facing Hunger in Huntington, River City Harvest in Ashland and Ironton City Mission.

Runners and walkers turned in their times to Osuch, who schedules events on his O Such Tri-state Race Planners Facebook page.

“Mother’s Day (was) our third one,” Osuch said. “We’re changing every race in late June and July to virtual.”

Thanks to schools closing their campuses because of the coronavirus, the Gussler house has been full. Claire was home from Colby College in Waterville, Maine, and youngest son Billy attends The Hill School in Pottstown, Pennsylvania. (Oldest son David, a senior at Purdue University, stayed in West Lafayette, Indiana.)

“I have two teenagers in the house, and they eat quite a bit, so we’re cooking creative meals,” mom Gussler said. “We’ve been making a lot of desserts; it’s not the best food for runners, but it’s sure helped get us through quarantine.”