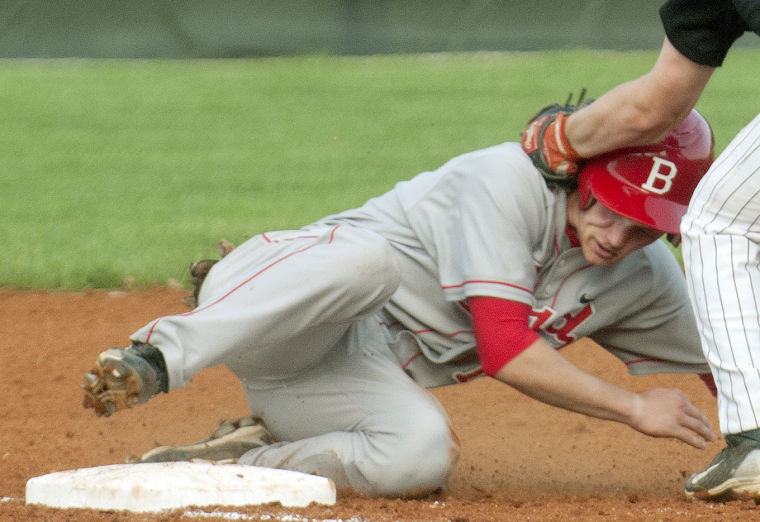 Boyd County's Trey Salisbury gets in under the tag of Raceland's Josh Reed at third base Monday during the Lions' 10-0 mercy win at Boyd County. 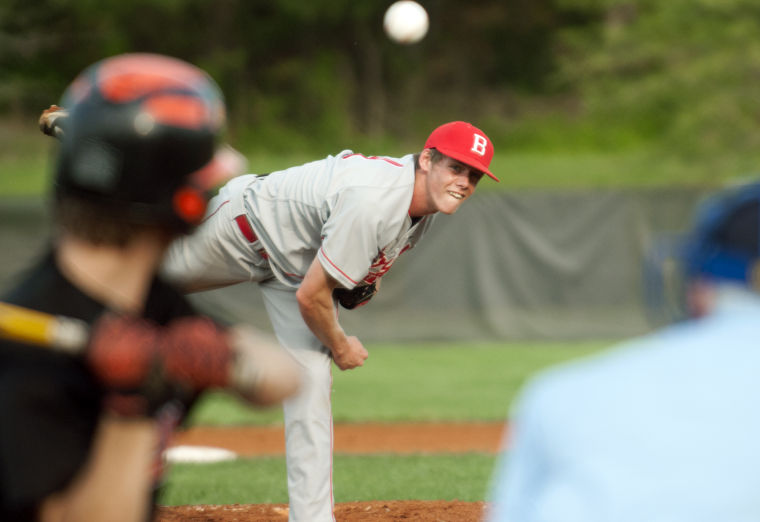 Boyd County junior Trey Salisbury delivers a pitch Monday during the Lions' 10-0 win over Raceland at Boyd County. Salisbury struck out seven players in three innings on the mound.

Boyd County's Trey Salisbury gets in under the tag of Raceland's Josh Reed at third base Monday during the Lions' 10-0 mercy win at Boyd County.

Boyd County junior Trey Salisbury delivers a pitch Monday during the Lions' 10-0 win over Raceland at Boyd County. Salisbury struck out seven players in three innings on the mound.

The Lions’ 2-3-4 hitters went a combined 8-for-8 at the plate, while pitchers Trey Salisbury and J.D. McDowell combined on a one-hitter Monday night at Larry Addington Field.

As a result, Boyd County rolled past Raceland 10-0 in five innings.

“We’ve been scuffling a little lately,” said Lions coach Brandon Ramsey, whose team had dropped consecutive games to Ashland, Spring Valley (W. Va.) and fourth-ranked Lexington Catholic. “We have not exactly been hitting very well. We came out of it today.”

The game was originally scheduled to be played at Raceland, but poor field conditions there led to the move. Boyd County also posted a mercy-rule shutout of Raceland to start the season.

Monday’s contest produced the kind of results Salisbury had been looking for, both as a hitter and pitcher.

The talented junior, batting in the No. 3 spot between Maloy and Pauley, supplied a run-scoring single in the first inning and RBI double in the second as the Lions jumped out to an 8-0 lead.

“It feels good to come back,” Salisbury said. “I have not hit well in a while. I’m trying to get back to my game from last year.”

Salisbury spent most of his sophomore season around the .500 mark, but hasn’t found the same groove this season. While hitting in bad luck at times, Salisbury also puts blame on himself.

“Mostly mechanics and in my head,” he said. “I only struck out five or six times last year. I have six already, I know, or more.”

On the mound, Salisbury dominated with seven strikeouts in three innings. He allowed a first-inning single to Josh Reed and no walks.

“I just wanted to come out and work on my mechanics, throw strikes and get ahead of guys,” said Salisbury, who improved to 2-3 on the season. He has drawn some of the top assignments on Boyd County’s loaded schedule.

Ramsey, a former Marshall University hurler, said Salisbury can pitch on the Division I level.

“He has pitched in some tough luck this season,” Ramsey said. “At one point, Trey was 0-2 with like a 1.08 earned run average. He started getting little bad habits. We’re getting him back on track pitching and hitting.”

Salisbury should be fresh for the Louisville Invitational Tournament over the weekend. Boyd County (11-8) is scheduled to meet 18th-ranked Daviess County, No. 3 Louisville Eastern and Lexington Christian.

“We’ve been in every game, but not been able to get over the top,” Ramsey said. “Hopefully, tonight will start to get ourselves right.”

McDowell took over on the mound for the Lions in the fourth inning and retired all six batters he faced, including two strikeouts.

Pauley, the Lions’ senior shortstop, made nice over-the-shoulder catches in the fourth and fifth inning to go with his big day at the plate. He drove in four runs with two singles and a double.

“Kyle has been the consistent one in the middle of the lineup,” Ramsey said. “He was batting second and we moved him to fourth.”

Leadoff man Austin Smith contributed a single and walk to the big showing from the top of the Lions’ order.

Boyd County host Russell tonight at 6. Raceland (5-9) is scheduled to play at home against Ashland.

Perry Lee Holt, 70, of South Shore, Kentucky, passed away, Sunday, June 13, 2021, at his home in South Shore. Perry was born March 20, 1951, in Wurtland, Kentucky, a son of the late Lowell and Ruby Roark Holt. He was a member of South Portsmouth Church of Christ, loved the bible and retired …