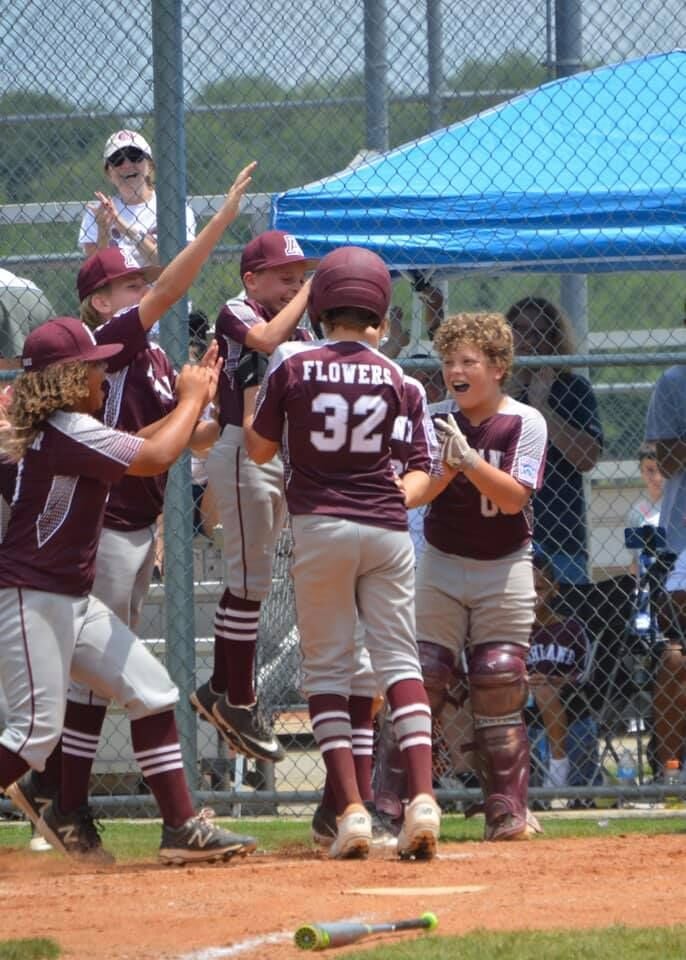 Ashland teammates congratulate Connor Flowers after his home run on Monday against Paintsville in Bowling Green. 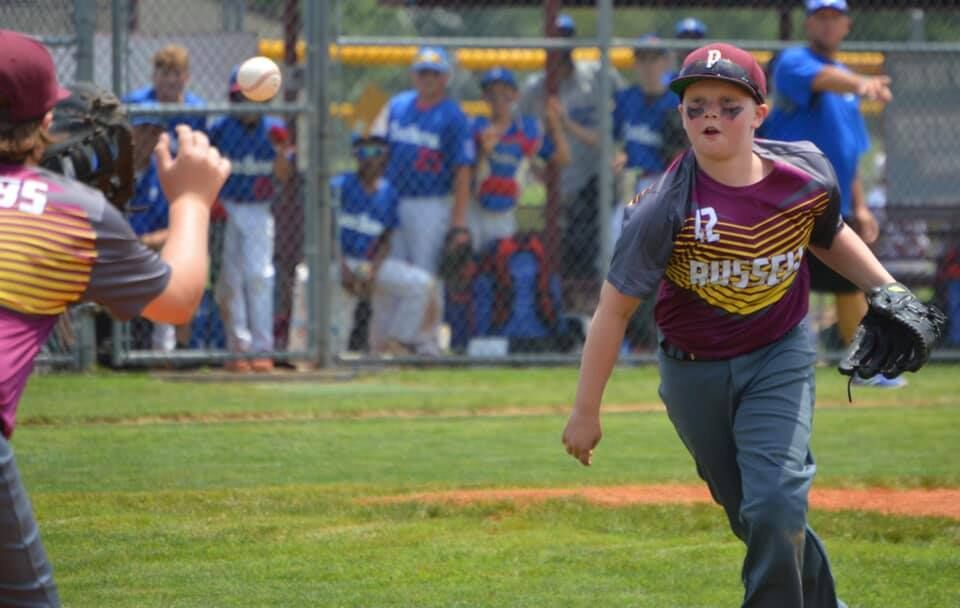 Russell's Ross Vanover flips a ball to the first baseman on Monday against Owensboro Southern in Bowling Green. 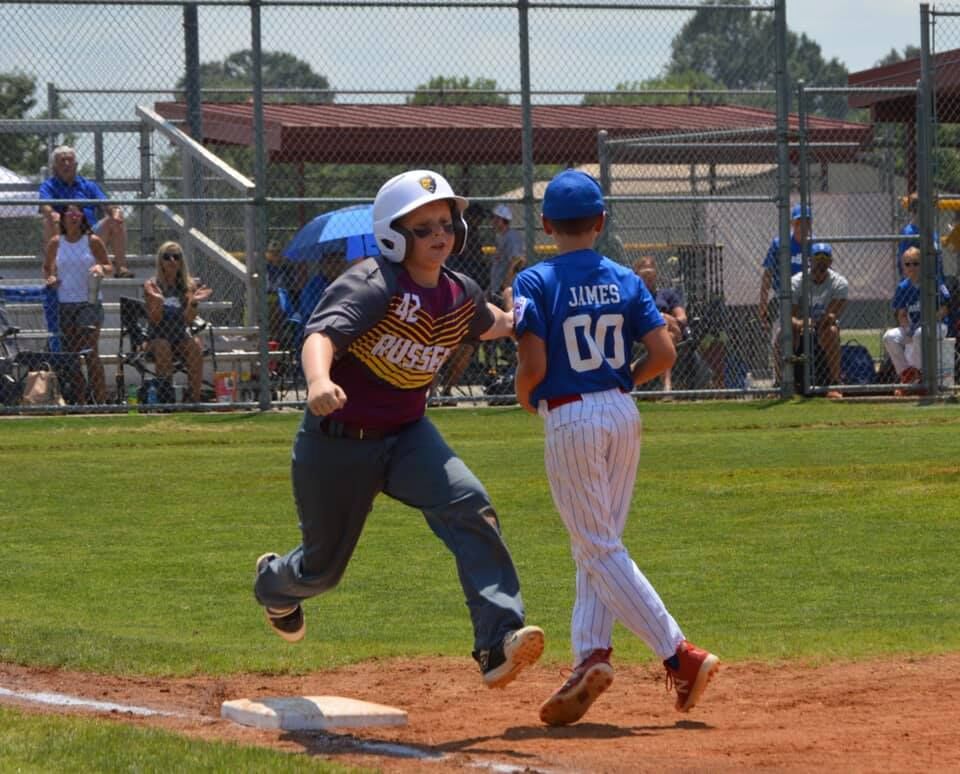 Russell's Ross Vanover runs through first base on Monday against Owensboro Southern in Bowling Green. 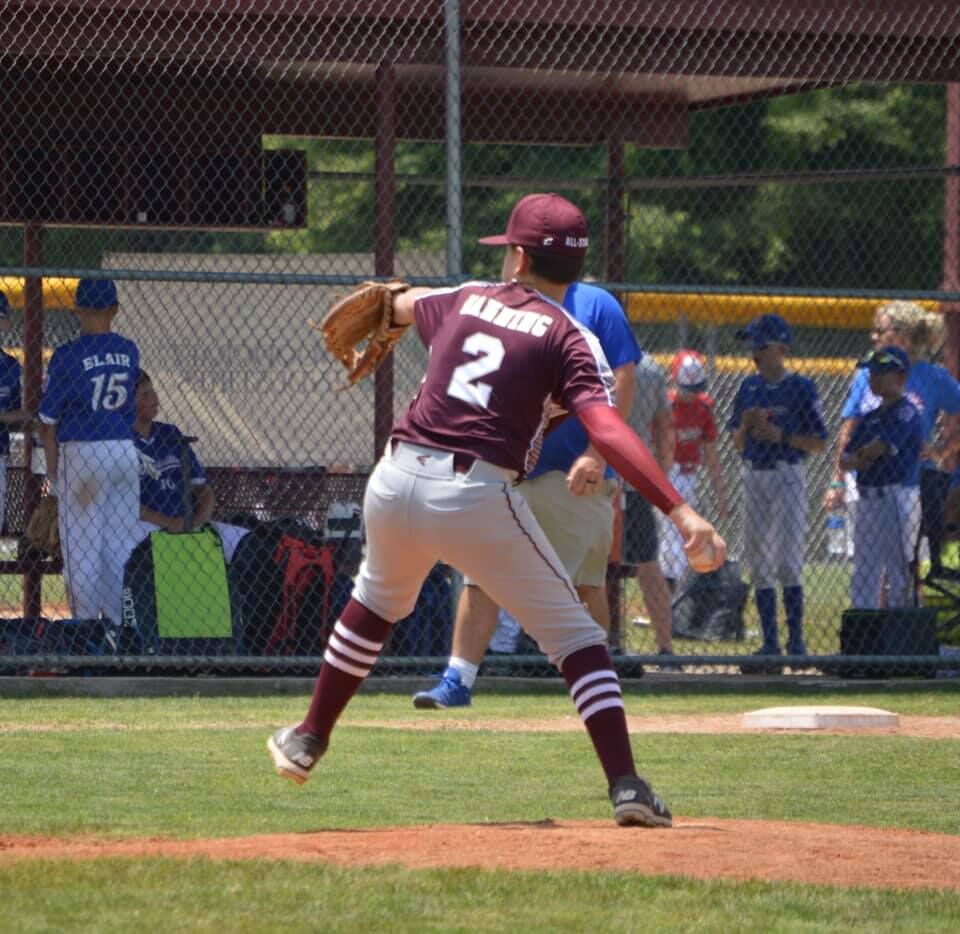 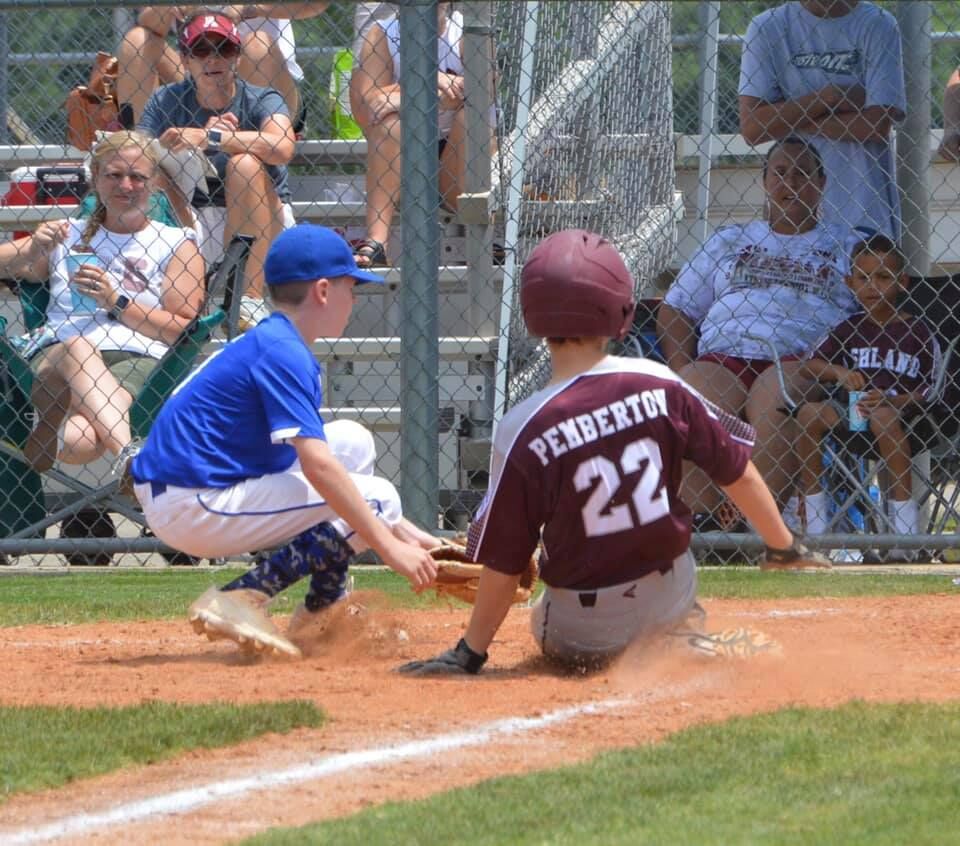 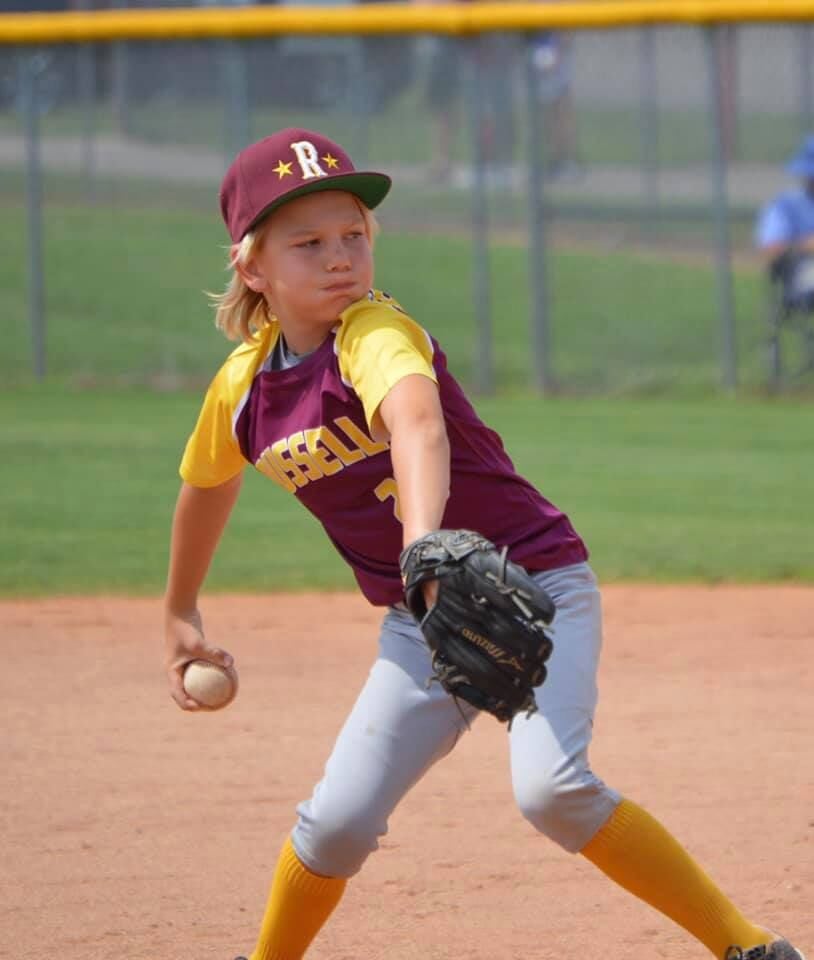 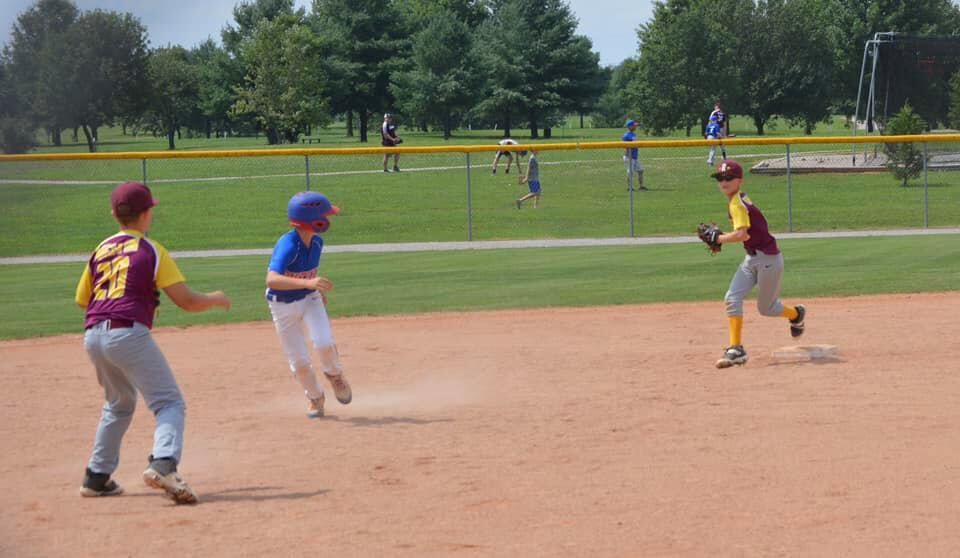 Russell 10U's Atreyu Qualls and Luke Melvin have a Lexington Eastern player trapped in a rundown on Monday in bowling Green. 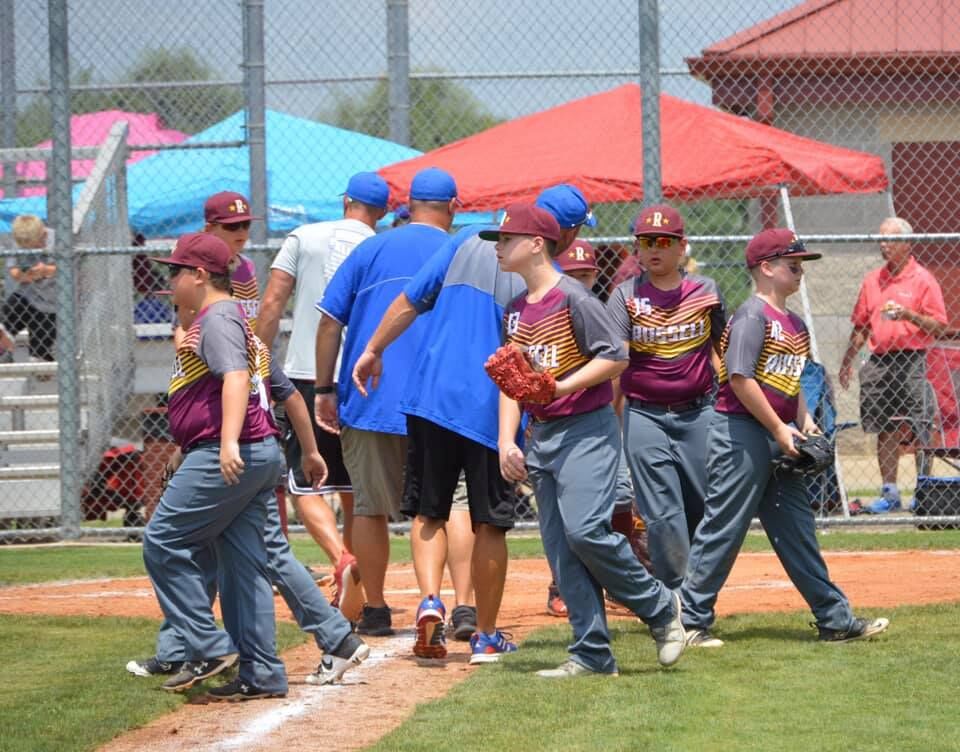 Russell's 11U All-Stars retreat to the dugout after shaking hands with Owensboro Southern following a loss on Monday in Bowling Green.

Ashland teammates congratulate Connor Flowers after his home run on Monday against Paintsville in Bowling Green.

Russell's Ross Vanover flips a ball to the first baseman on Monday against Owensboro Southern in Bowling Green.

Russell's Ross Vanover runs through first base on Monday against Owensboro Southern in Bowling Green.

Russell 10U's Atreyu Qualls and Luke Melvin have a Lexington Eastern player trapped in a rundown on Monday in bowling Green.

Russell's 11U All-Stars retreat to the dugout after shaking hands with Owensboro Southern following a loss on Monday in Bowling Green.

Ashland plated four runs in the top of the sixth and final inning to beat Paintsville, 7-3, on Monday afternoon.

Connor Flowers was 2 for 4 with a home run and three RBIs to lead Ashland’s offense. Tevin Smith supplied a pair of hits and an RBI.

Chandler Kisor pitched a spotless sixth frame for Ashland. He fanned one.

The top two teams from each of two pools advanced to Tuesday’s semifinals. Warren South and Lexington Eastern, both of whom defeated Ashland handily, made it to the final four. Paintsville went 0-3 in pool play.

“I believe our team received a true all-around learning experience in this year’s state tournament that I hope serves to grow these kids, not only as players but as adults,” said Ashland manager Rob Lynch. “We were humbled against Warren South our first game, performed better but learned about our deficiencies against Lexington Eastern, and came together as a team and fought through adversity to beat Paintsville to go back home on a positive note.

“This is a special group that has experienced a lot of success in this sport,” Lynch added. “If they stick together and really decide to enjoy the grind that it takes to reach their full potential as baseball players, success will be inevitability.”

Russell Flatwoods represented District 6 in the other two divisions in Bowling Green. The 11U squad went 0-3, but showed some fight and resiliency throughout the tournament. Ian “Womp” Lother and Griffin Fisher led the offense in an 8-7 loss to Corbin on Sunday after the team was shut out on Saturday.

On Monday, Owensboro Southern was too much for Russell’s 11s. Pitcher Kane Jacobs valiantly battled through some trouble early on, but Owensboro pulled away with a huge third inning. The explosion boosted Owensboro to a 13-0 triumph.

Manager Ryan Lother hat-tipped the boys for their fortitude.

“I could tell you a ‘Rah Rah’ story about the success my boys had and that ‘we’ll get ’em next year,’ but that would cheapen what our 11U All-Star team accomplished this season,” Lother said. “Thirteen kids came together, stood in front of lasers taking infield, drilled their fundamentals, got tasked with manning new positions based on need and gave it their level best to become District 6 champions, in so doing earning the right to represent our region in the state tournament.

“I would take my team in a knifefight against any group we ran into down there in Bowling Green,” Lother quipped. “Unfortunately, they made us play under conventional Little League baseball rules.”

After topping Hazard Perry, 7-2, and tripping up against Paintsville, 10-4, Russell’s 10s needed a W — or a lot of help from Hazard and Paintsville later Monday (in order to help break a tie among teams with a 1-2 record in the runs-against category) — over Lexington Eastern on Monday to secure a semifinal spot.

Atreyu Qualls had one of Russell’s five hits and scored the only run as Lexington Eastern dominated, 19-1, in a five-inning win.

Qualls dealt four-plus frames. He and his defense held Lexington scoreless in both the third and fourth innings after Lexington had scored four in each of the first two.

After third baseman Luke Melvin snagged a hot liner, and then turned and fired a bullet to second baseman Brevin Snyder for a double play, things looked promising for potentially a third straight scoreless inning. But that’s when it all unraveled for Russell — 11 runs later, the inning finally concluded.

Rylan Pickett and Snyder combined to walk just three batters, but Lexington hammered the gaps and capitalized on errors to cruise to victory.

“I was eager to see how our kids handled themselves in Game 1. I’m sure they were a nervous wreck because I know I was, but they handled it just fine,” said manager Kevin Peterman, who ascended to the role in the absence of manager Paul Craft. “We got down early, but they never once hung their heads. They stayed focused on the task at hand and rallied around each other, and walked away with a victory.

“The other two games didn’t go as planned,” he added. “A couple bad innings did us in. You’ll have that. We are a young team. Of our 10 players we had at State, three are 9-year-olds — and two of them made up our starting middle infield in Game 3. I couldn’t be more proud of this team. They are a great group of boys. The future is very bright for Red Devil baseball.”