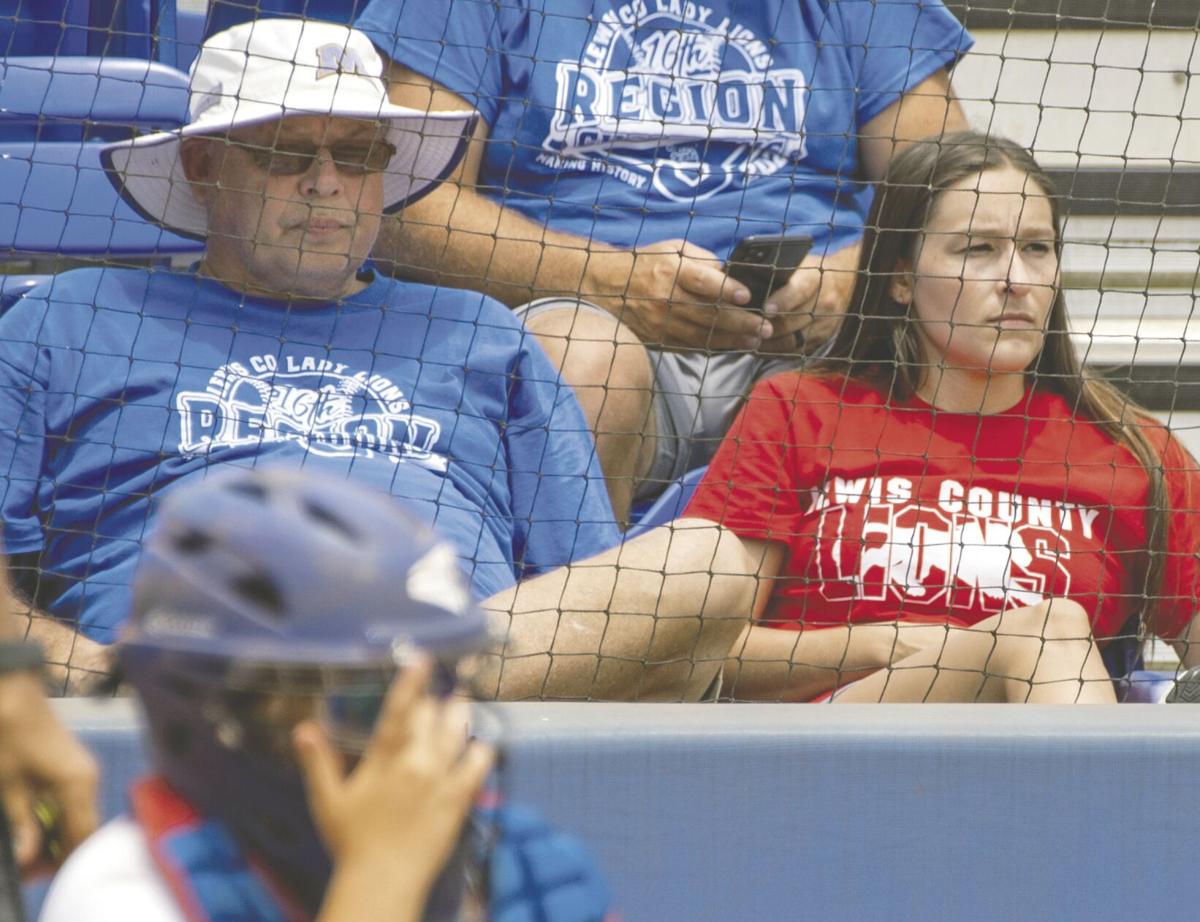 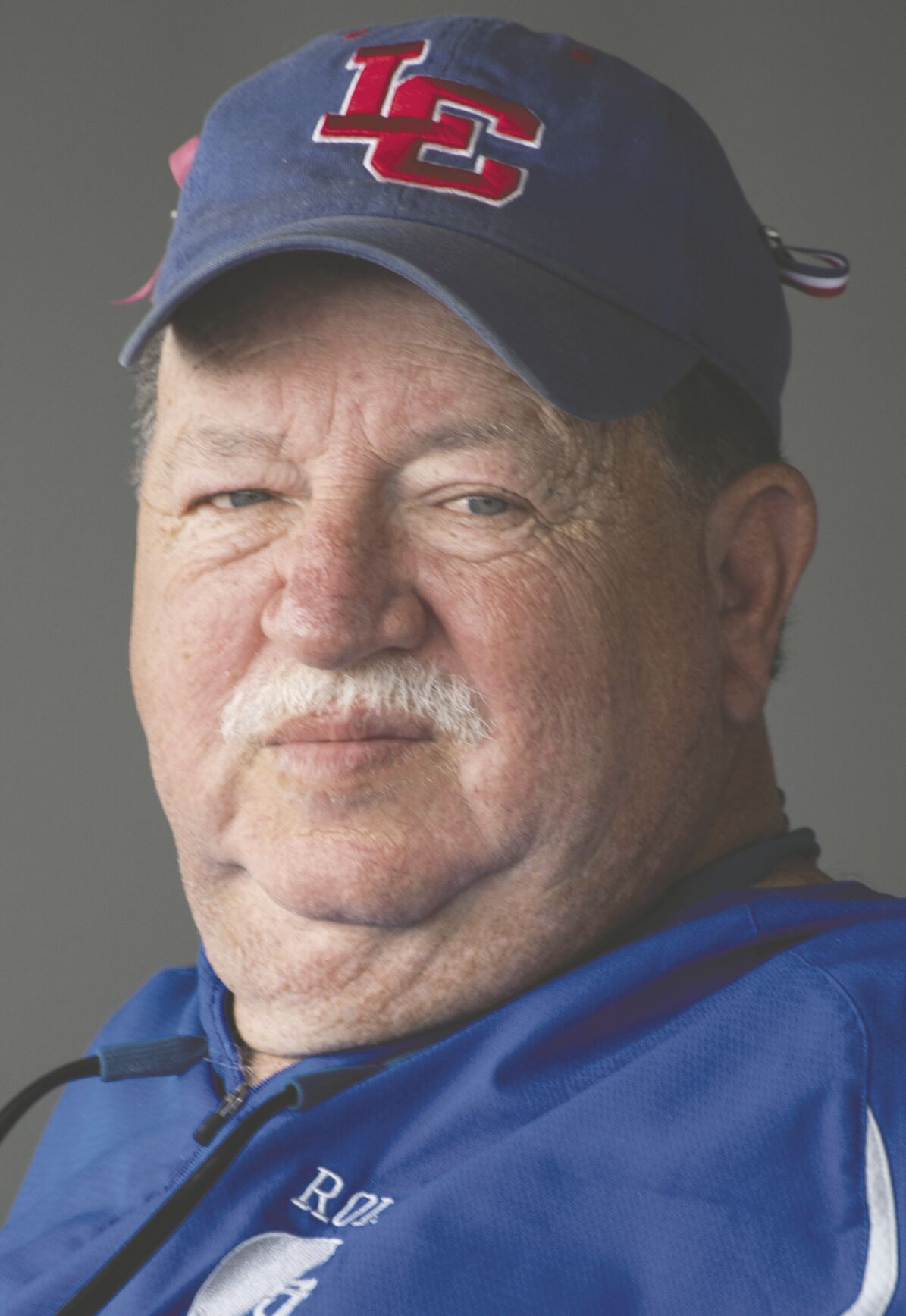 Former Lewis County softball coach Pudge Stafford waits for the start of the state tournament quarterfinal game Friday, June 18, 2021, between the Lions and Boyle County in Lexington, Ky. Photo by John Flavell / For The Daily Independent 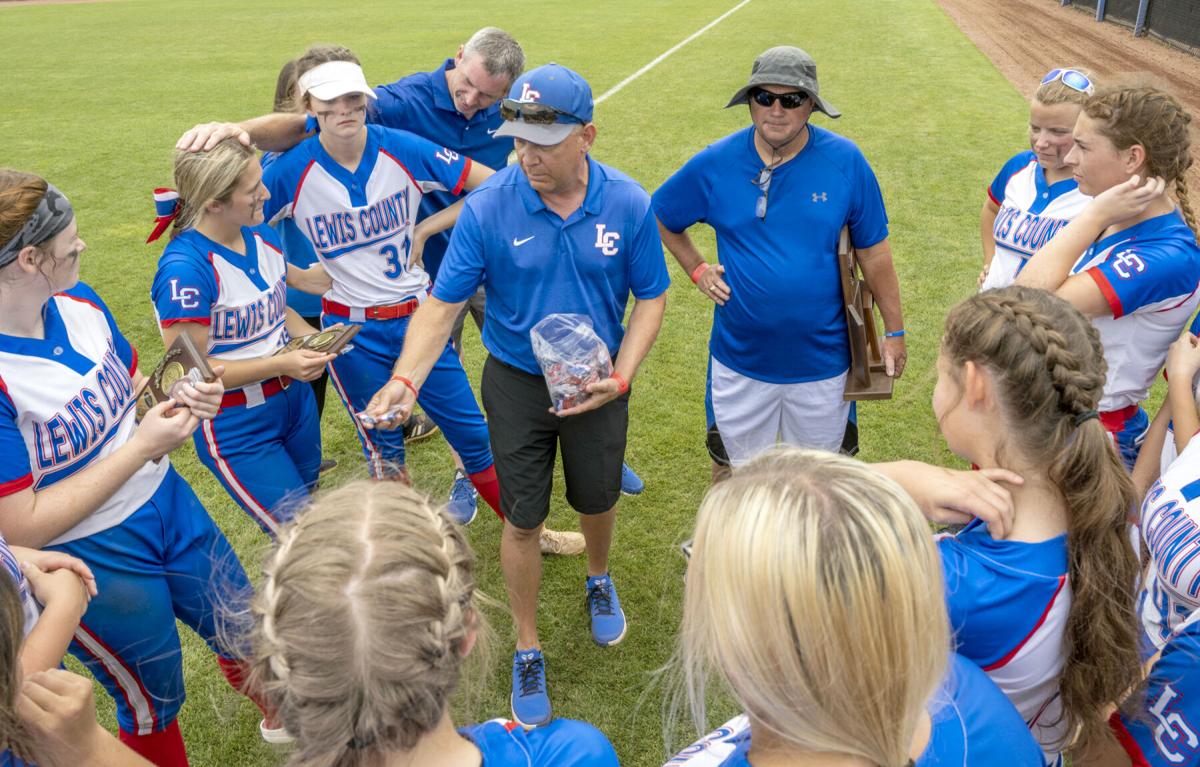 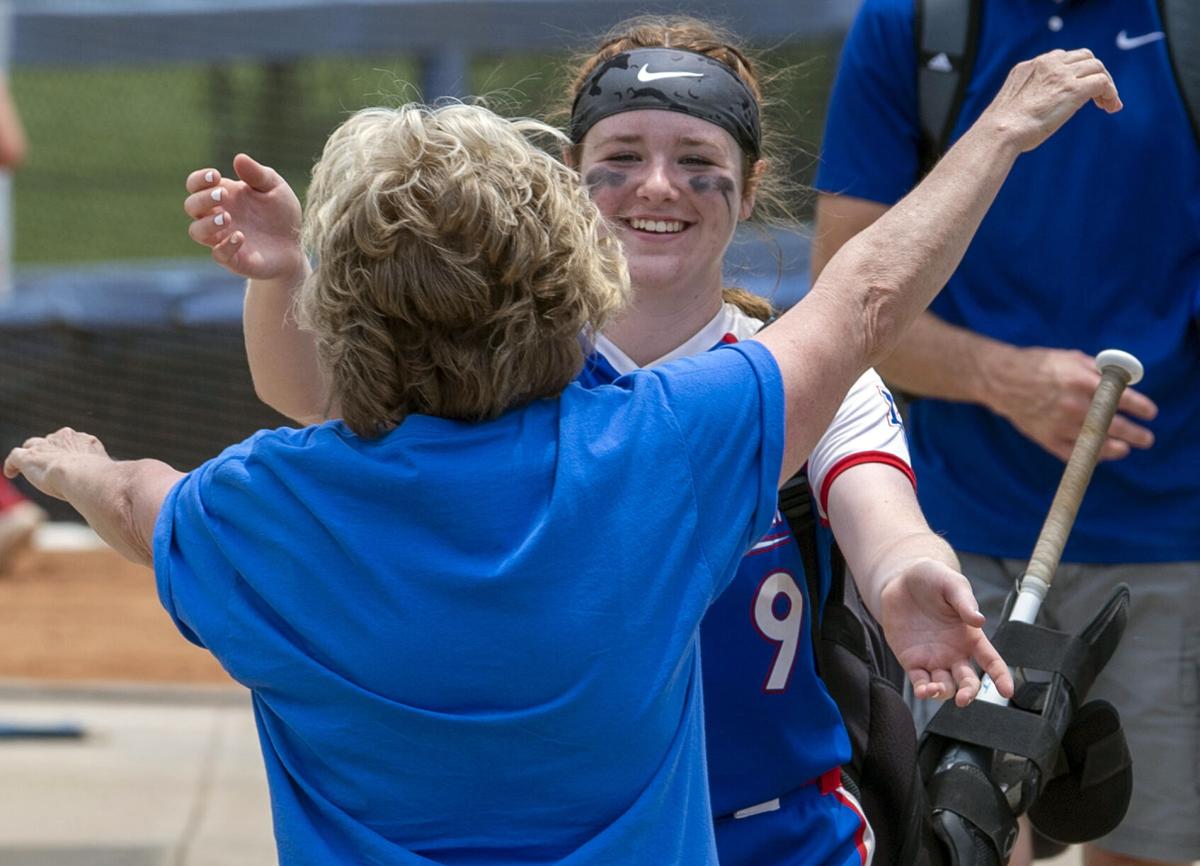 Lewis County ace Emily Cole get a hig from her grandmother, Linda Cook, Friday, June 18, 2021 after beating Boyle County in the state softball tournament quarterfinal in Lexington, Ky. Photo by John Flavell / For The Daily Independent

Former Lewis County softball coach Pudge Stafford waits for the start of the state tournament quarterfinal game Friday, June 18, 2021, between the Lions and Boyle County in Lexington, Ky. Photo by John Flavell / For The Daily Independent

Lewis County ace Emily Cole get a hig from her grandmother, Linda Cook, Friday, June 18, 2021 after beating Boyle County in the state softball tournament quarterfinal in Lexington, Ky. Photo by John Flavell / For The Daily Independent

LEXINGTON Kayla Lykins-Thomas estimated she’s able to attend about one Lewis County softball game a year, because the former Lady Lions coach lives in Ashland now. Besides that, she joked she’d have a hard time getting her two young kids to sit still for seven innings.

David “Pudge” Stafford, who succeeded Lykins-Thomas as Lewis County’s skipper in 2015, can’t take in many Lady Lions games either, he said, because he’s back in the sport as an umpire and that keeps him busy about six days a week.

So they weren’t about to miss an opportunity to see Lewis County on the state’s biggest stage for the first time ever. And they brought all their friends with them.

Kevin Lewis, who coached the Lady Lions to a district title in 2004, joked that the sea of blue had the KHSAA seeing green.

“We knew if we ever got to this point, what it would turn out to be,” Lewis said of the attendance. “I’m sure the KHSAA right now is thinking, where’s Lewis County? Why can’t we get them in every state championship? For the money of it.”

Jimmy Lykins, Lykins-Thomas’s father who skippered the Lady Lions for 10 seasons as part of a long career coaching various sports in the district before hanging it up in 2011, is now Lewis County’s judge-executive.

So who was in charge back home, he was asked, as he sat next to his daughter and basked in both the sun and in the Lady Lions’ victory over the Lady Rebels?

“I’m not sure,” Lykins said, “because I got the sheriff with me, the county attorney and the (property valuation administrator).”

Lykins predicted — check that, he flat-out stated — Lewis County’s fan base would outnumber Boyle County’s “three or four to one” in Lexington. Based on the eye test, that seemed plausible.

Lady Rebels coach Brian Deem recognized that level of excitement in the Lady Lions on the field.

“I sat there and I watched them, and I was like, that’s us, 2012,” Deem said, referencing Boyle County’s first trip to State before the perennially strong program made it a habit. “Didn’t have a care in the world. They’re soaking it in.

“I saw that team today playing very, very relaxed and with a nothing-to-lose mentality. When you got some athletes and some pitching like they do, that’s a dangerous combination right there.”

Every Lady Lions head coach in the history of the program has been a Lewis County grad, other than Mike Diller, who led the team from 2018-19, said Lewis County principal Jack Lykins (no relation to Jimmy Lykins or Lykins-Thomas, he said).

At least four of them were in attendance Friday. Two conceded seeing Lewis County in the state semifinals during their tenure as coach would have been difficult to believe.

The Lady Lions, after all, had never even played in a region tournament final until this spring. That isn’t because Lewis County has been bad at softball, but in large part because it’s an uphill climb just making it to the 16th Region Tournament from the uber-competitive 63rd District. Case in point — this year Raceland, the winningest team in the 16th Region, an All “A” Classic state semifinalist and considered a favorite to reach Lexington, didn’t play past Memorial Day.

The Lady Lions had lost 61 of their previous 64 games against district opponents coming into the 2019 season. Diller-led Lewis County won its first district championship since 2004 in dramatic fashion that year and repeated that feat this season.

The Lady Lions lost seven of their final nine regular-season games, but by the time they had no choice but to win, they won and won, beginning in a district semifinal against resurgent Greenup County that was no sure thing.

That run carried all the way to the state’s Final Four as Lewis County’s first representative to a state tournament since its baseball team in 1977 — on which Stafford was the senior designated hitter.

“They’ll remember every minute of it,” Stafford said of the Lady Lions’ surge, “because I still do.”

So will others in attendance with great investment in Lewis County sports.

“I can be pretty emotional about it because of my love for kids and for Lewis County,” Jimmy Lykins said. “It’s a bright moment for us.”

And, the Lady Lions hope, not the last of its kind.

“I figure we’ll have a hard time scheduling games next year, somewhat,” Lewis County coach Joe Hampton said. “May have to travel a little more, but I feel like the target will be there on us going into next year and that’s a good thing for these girls to say, hey, we’ve got the program to that level. And hopefully they step up to that challenge.”