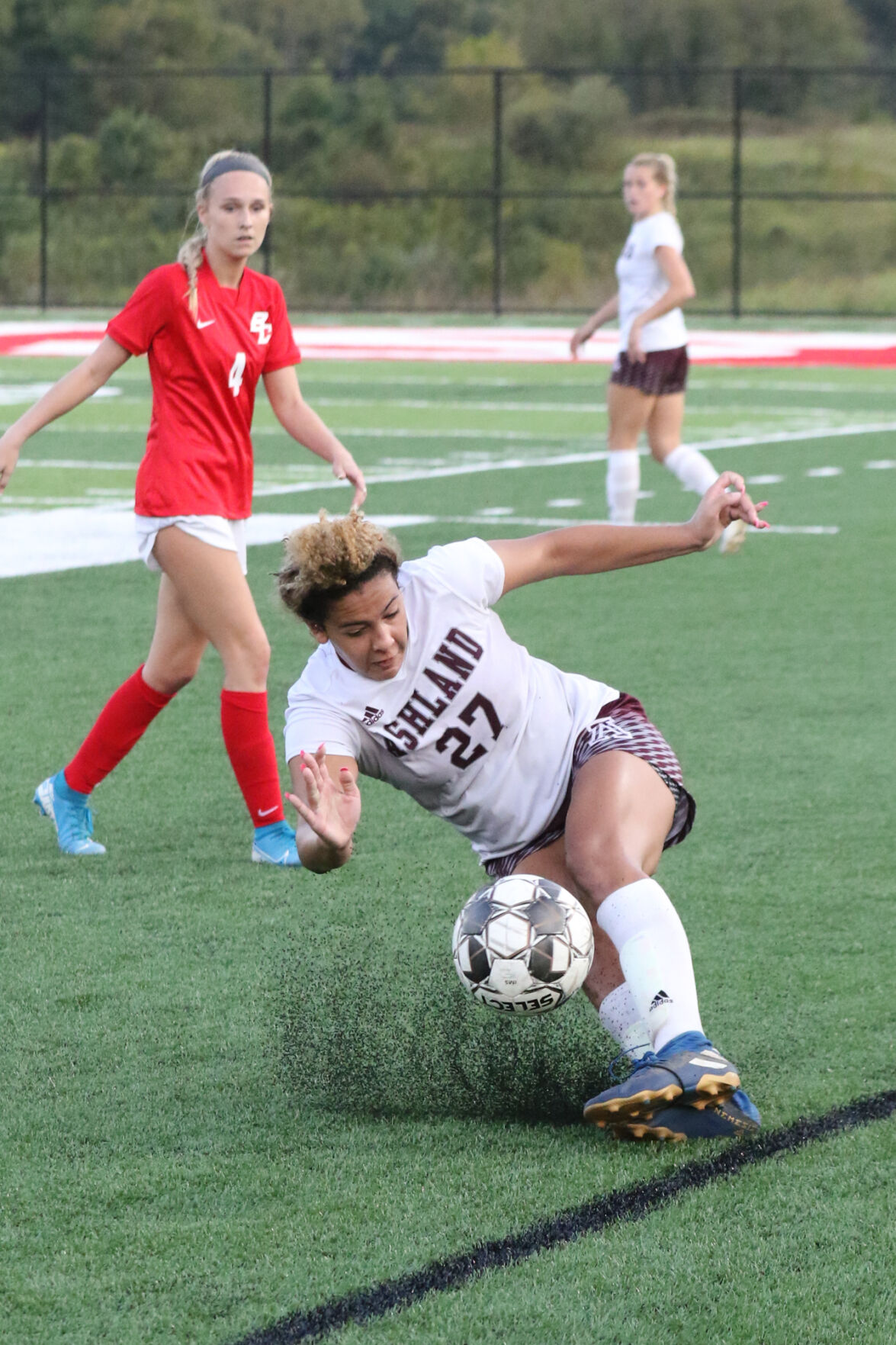 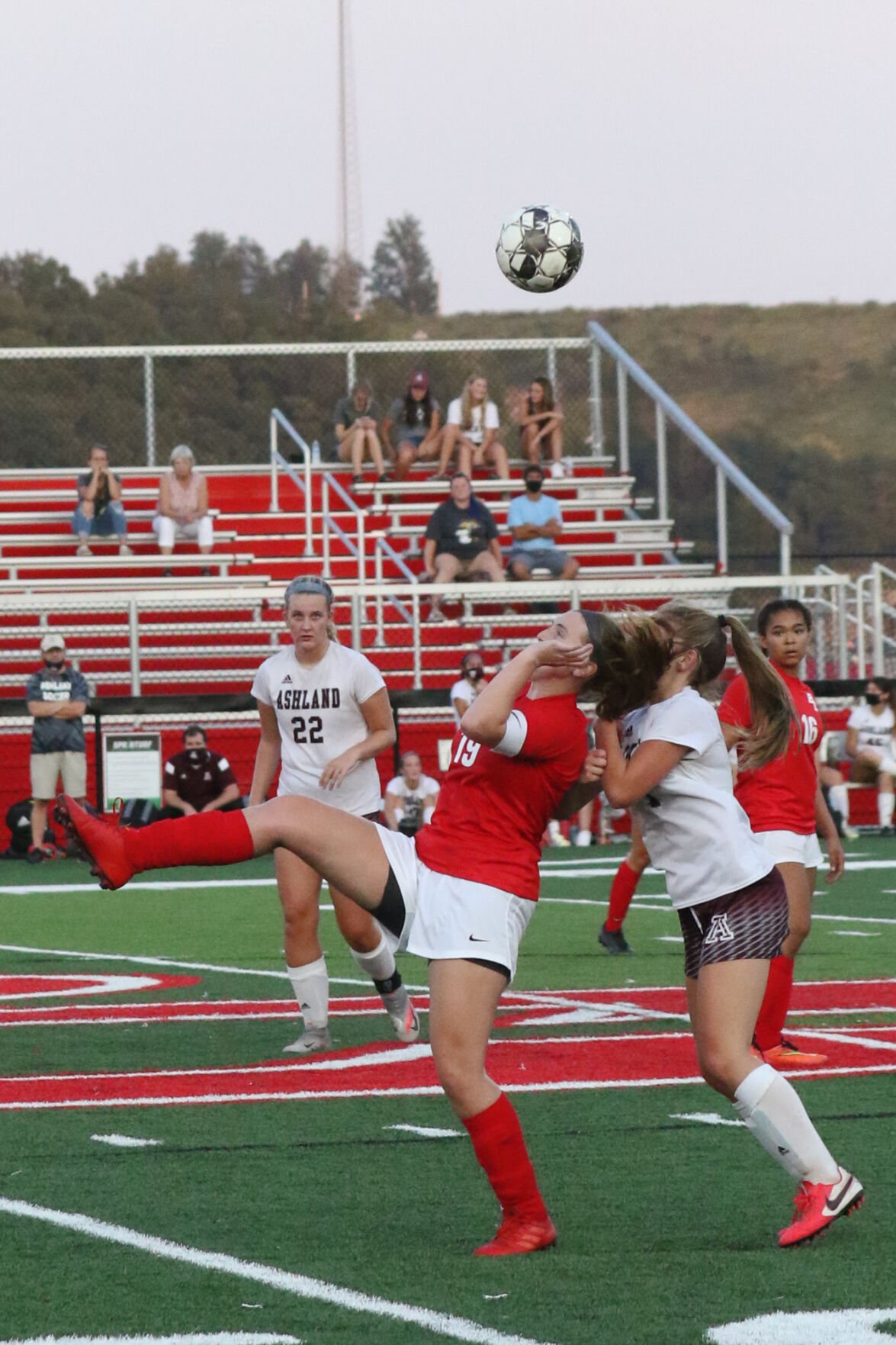 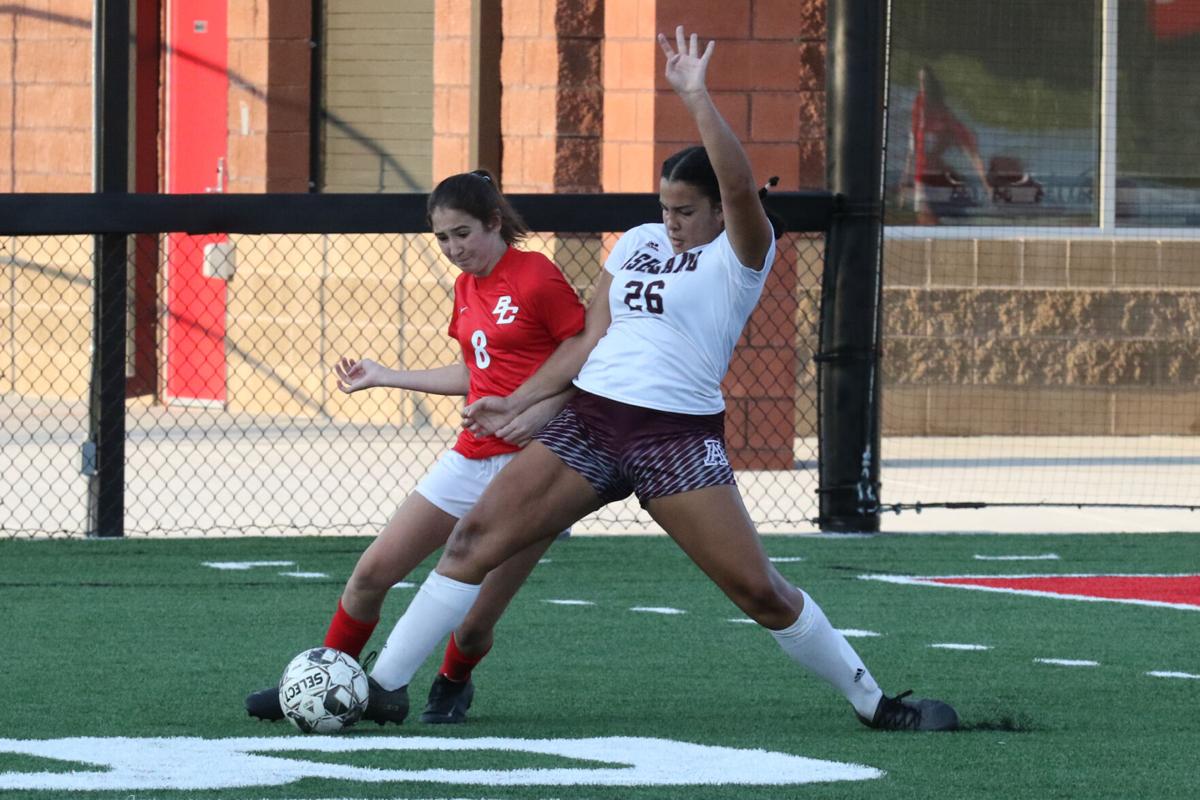 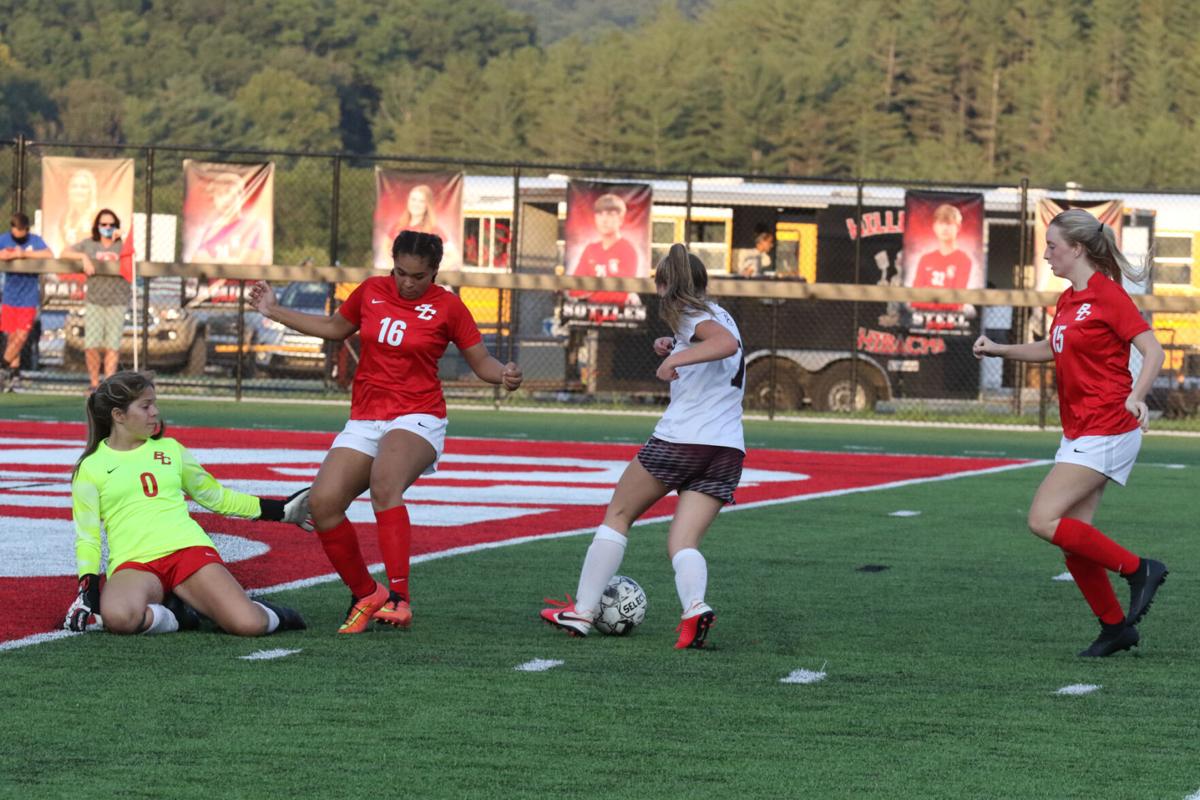 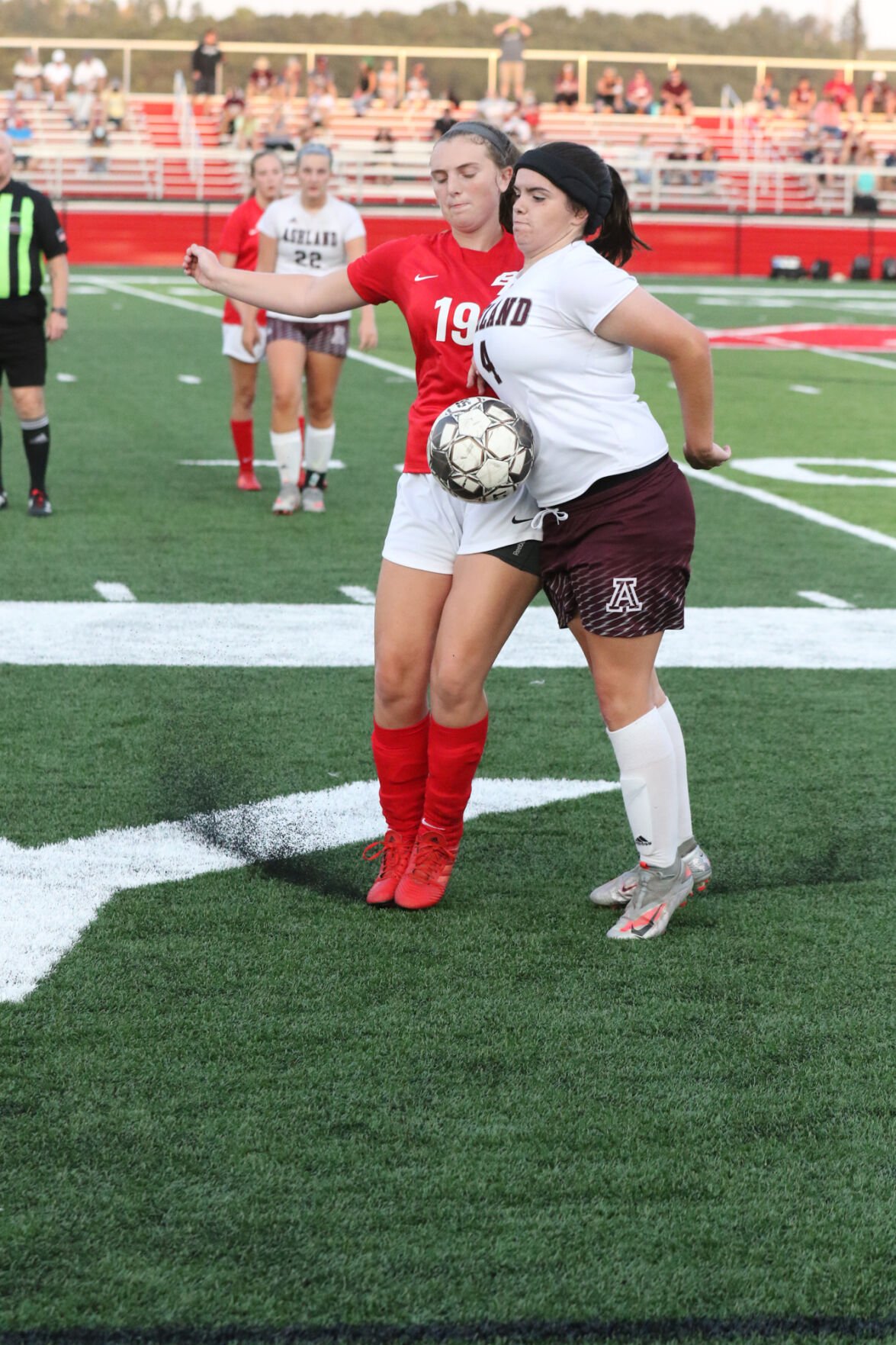 CANNONSBURG The home field advantage had a little extra flair on Tuesday night.

The LadyCats scored two goals in the second half to leave Cannonsburg with a 2-1 comeback victory.

“This year’s team is just like last year’s,” Ashland coach John Cook said. “They take coaching so well at halftime when we make adjustments. We actually went from a 4-3-3 to a 4-4-2 (formation).”

“We got on them at halftime,” he added. “And they knew it. Our seniors knew they weren’t giving the maximum effort they needed to. Boyd County is a good team and a well-coached team. Billy (Kemper) is a heck of a coach. They gave us more than we wanted. We challenged them to dig deep. No one is in soccer shape right now with COVID-19.”

Kemper was proud of his team’s effort but saw a group of Lady Lions that lost some steam in the final 40 minutes.

“We were out of air,” Kemper said. “We didn’t have any power. It was just our first game. Our preseason wasn’t good with all the issues going on. I think we will be better as the season goes on. Our conditioning was really bad. I could just tell the girls’ legs got heavy.”

Boyd County’s field features a longer and wider playing surface. The extra real estate can give the offense more room to operate. It will also test endurance, especially early in the season.

“This field is 120 yards long and 75 yards wide,” Cook said. “It’s bigger than our field. We thought it would work to our advantage because we like to spread out, but the problem we had, we didn’t spread in the first half. We did in the second half. This is a harder field to play on. … It’s a beautiful field.”

Kemper was also impressed with the new digs.

“I wish I had something like this to play on when I was young,” Kemper said. “I think it’s a great atmosphere. It’s a pretty big field. It’s wider than what most people think. You are going to do a lot of running on this field. I am glad Boyd County has a field like this. They can represent their school well with this nice stadium.”

Boyd County (0-1) started the scoring midway through the opening half. A battle for the ball resulted in a Lady Lions corner kick. Izzy Shavers sent the ball deep in the box. It bounced around and sophomore Shianne Manley managed to get a piece of the ball with a header. The Ashland keeper caught the ball, but she was over the goal line.

“It is our first game and I didn’t know how far along we were,” Kemper said. “I thought it would be an ugly game between both of the teams. We both are going to improve during the season. We will see what happens. (Ashland’s) two goals, they both should have been stopped. We had our chances. I think it will be a good season.”

It didn’t take the LadyCats long to attack in the second half. Raegan Slone took an outlet pass, maneuvered past several defenders and found a clean shot to boot it into the back of the net. The sophomore used a quick change of direction to get past the Boyd County keeper and tied the contest at 1-1 just over a minute into the second half.

Ashland also found success with a corner kick. Jess Brown placed a pass in front of the net and Callie Jackson sent it in for the game-winner. The LadyCats picked up their defensive intensity, allowing one Boyd County shot on goal until the final minutes.

“We pretty much kept the same defense,” Cook said. “Of course, Mimi Moore is back, and she is our sweeper in the back. She is probably the fastest kid in the 16th Region. I don’t know anybody any faster. She keeps everything cleaned up.”

Ashland (1-0) took advantage of the only seeding game between the two teams this season. Cook was glad to see his team play with a sense of urgency early in the season.

“That is what we told the girls, this is a hard one to start off with,” Cook said. “If you win this game and do the same thing with Russell, you are going to the region (tournament). That’s just the way it is. We are pushing that to them, hoping they will take it to heart.”