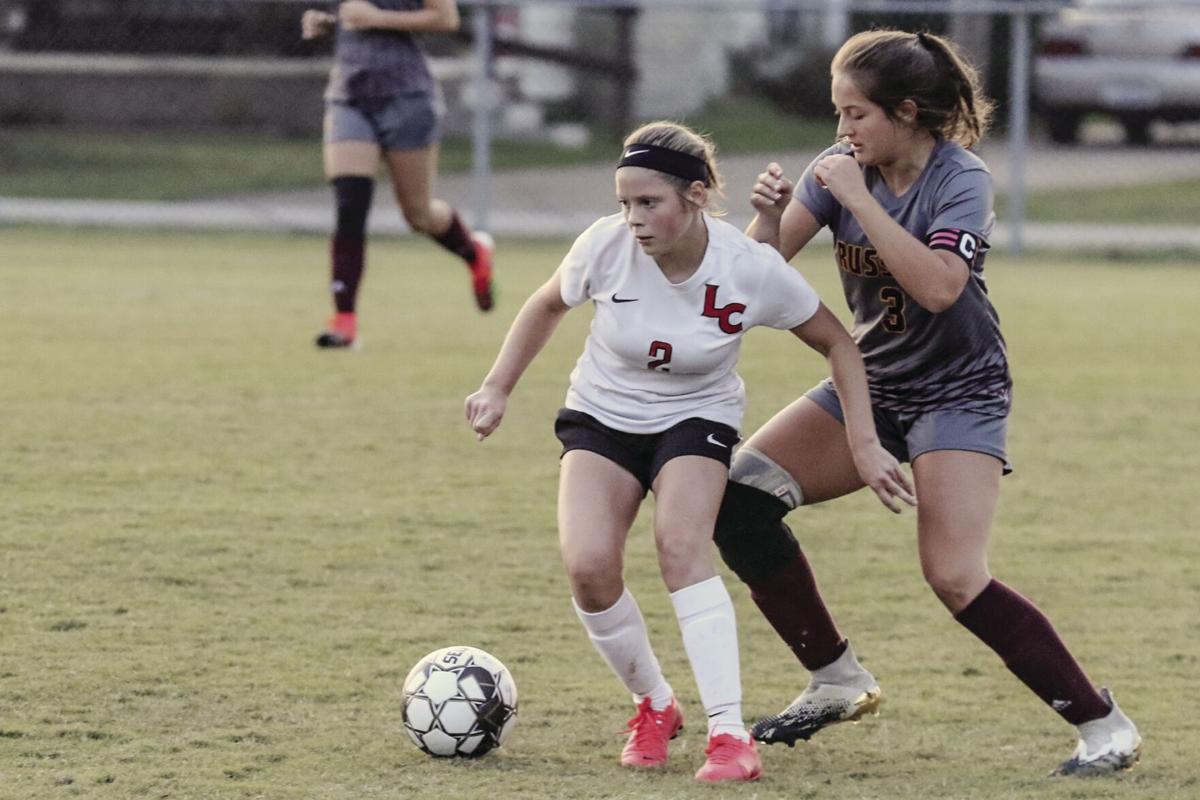 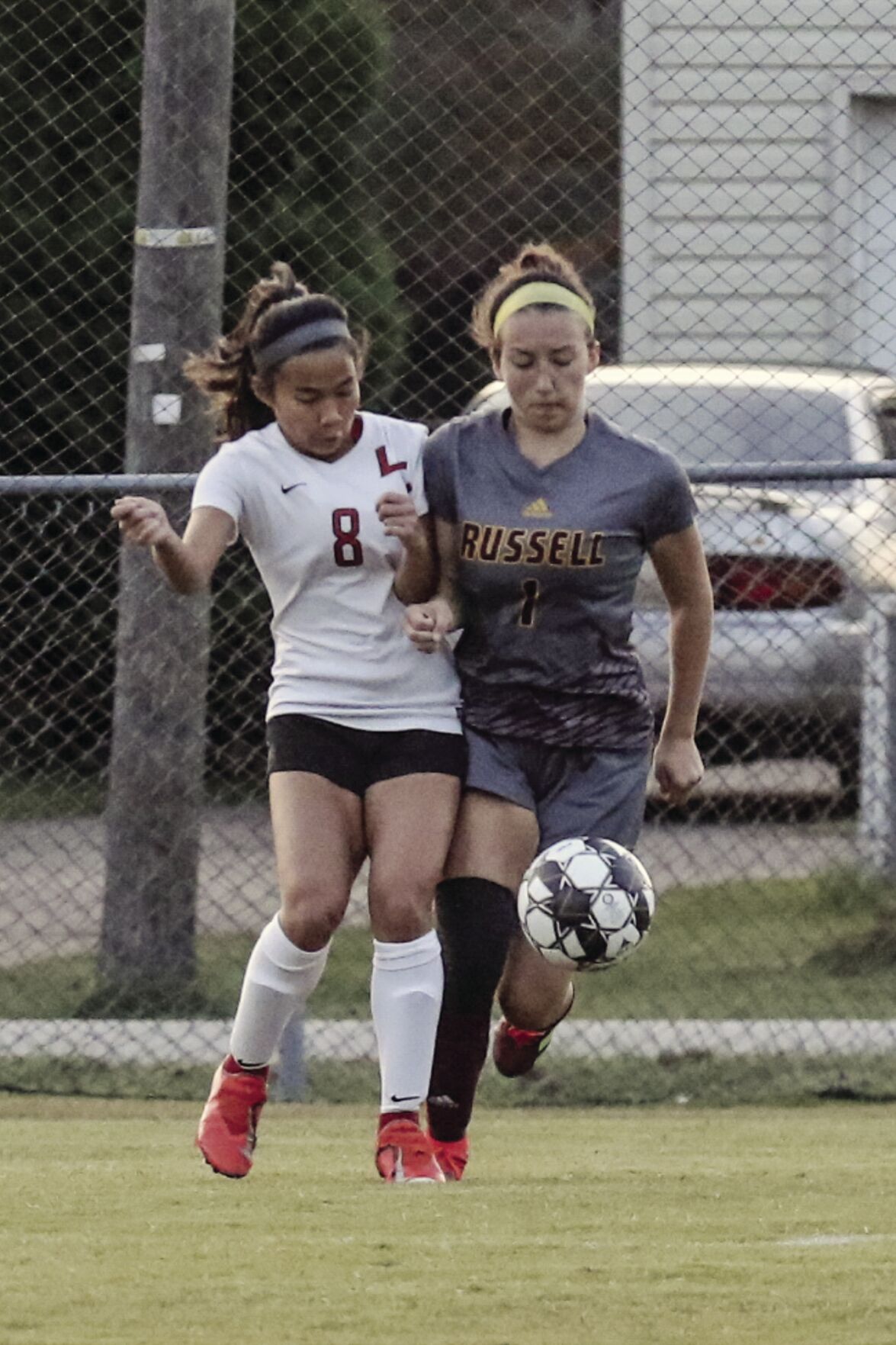 Matt Jones | The Daily Independent Russells’ Jenna Adkins and Lawrence County’s Jasmine Justice fight for control of a ball in the first half of Tuesday’s game. 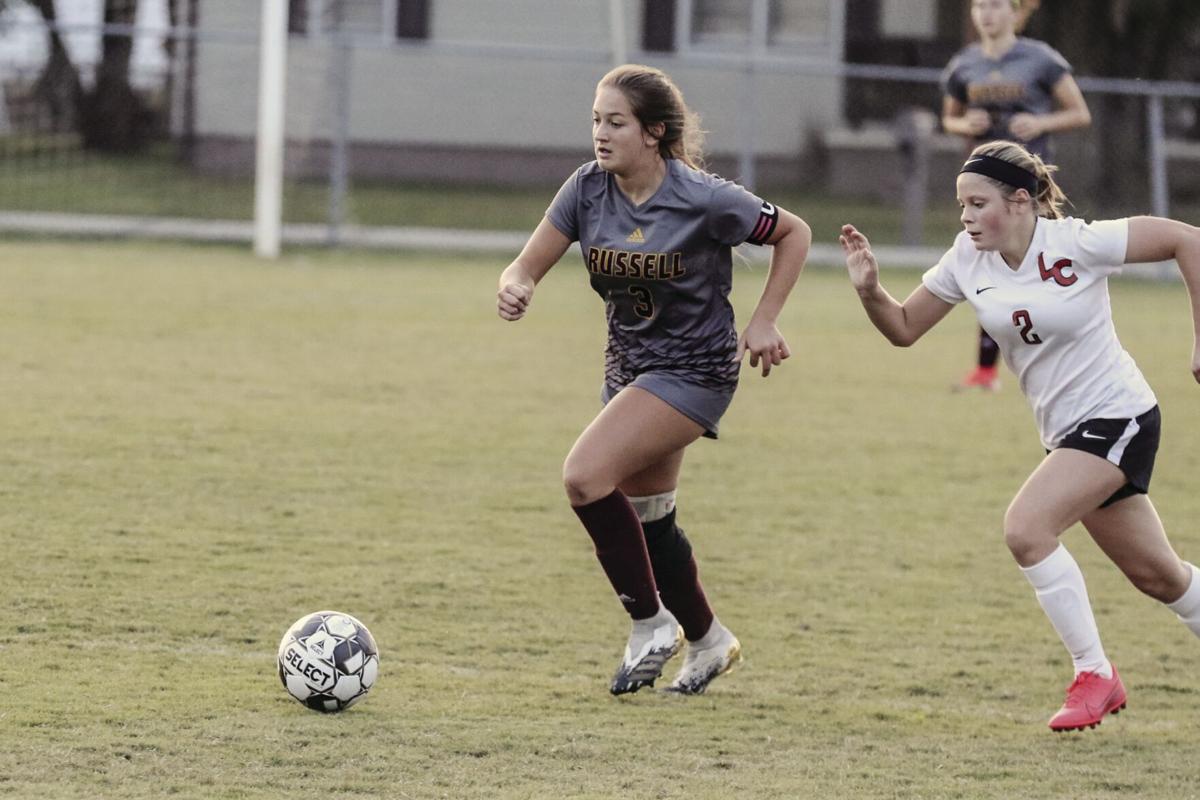 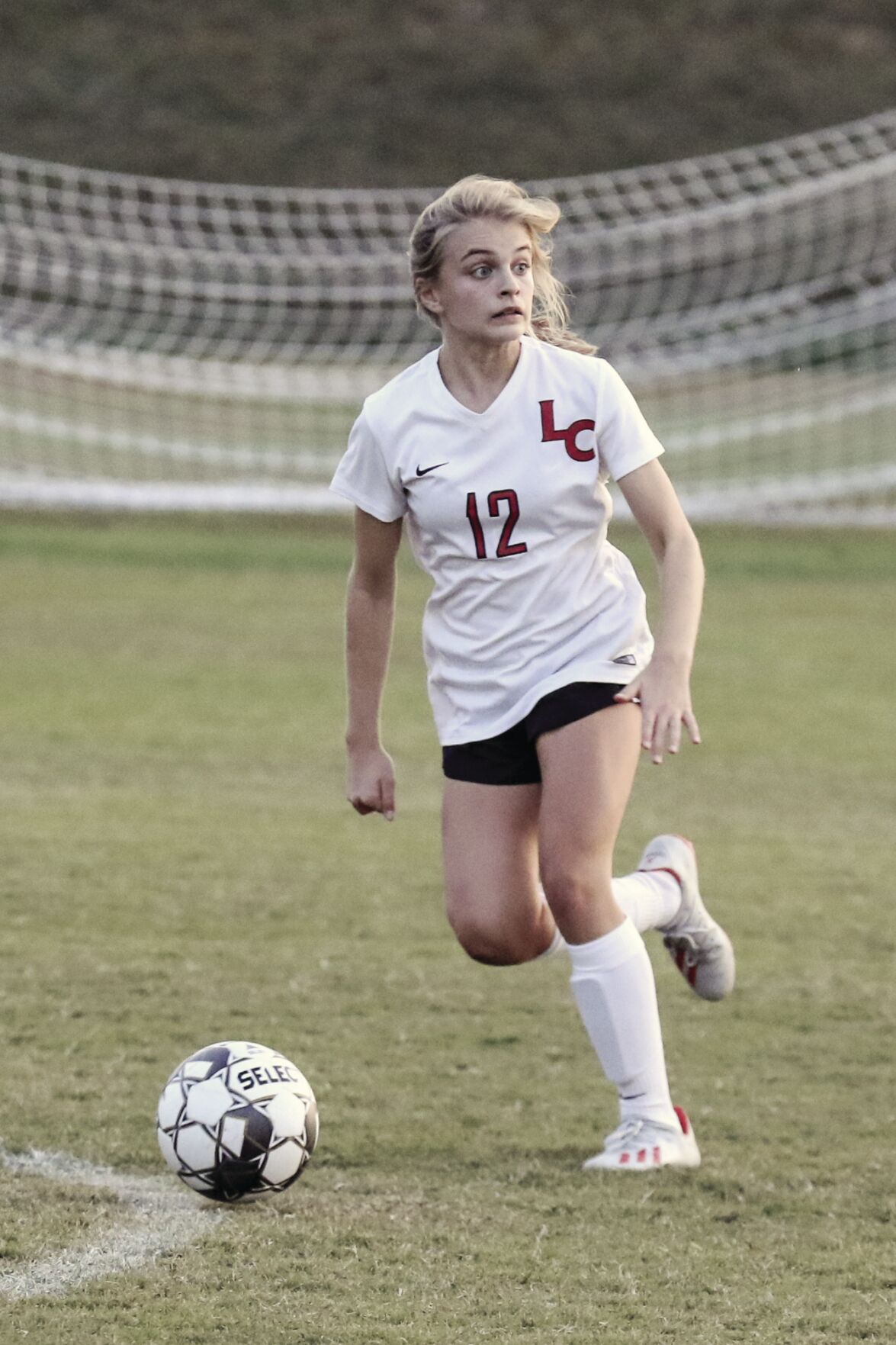 Matt Jones | The Daily Independent Lady Bulldog Maggie Johnson looks for an outlet pass during the first half of Tuesday’s win at Russell. v 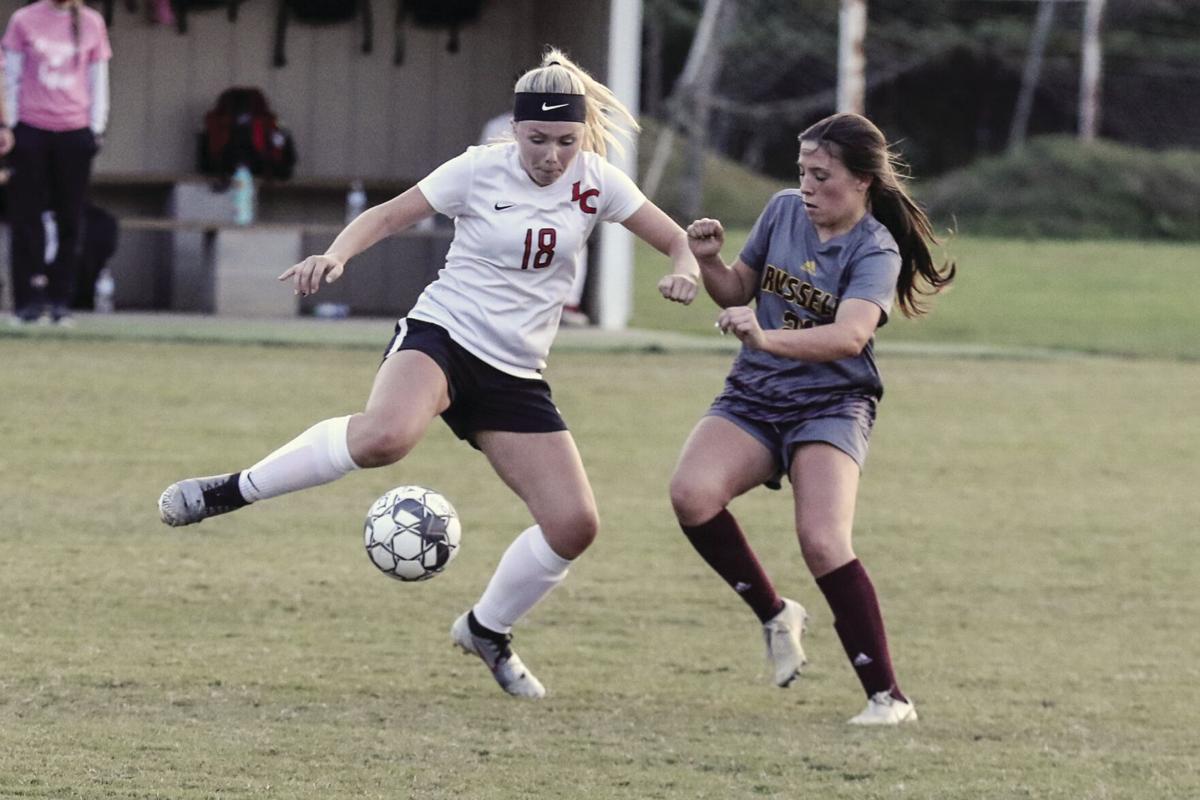 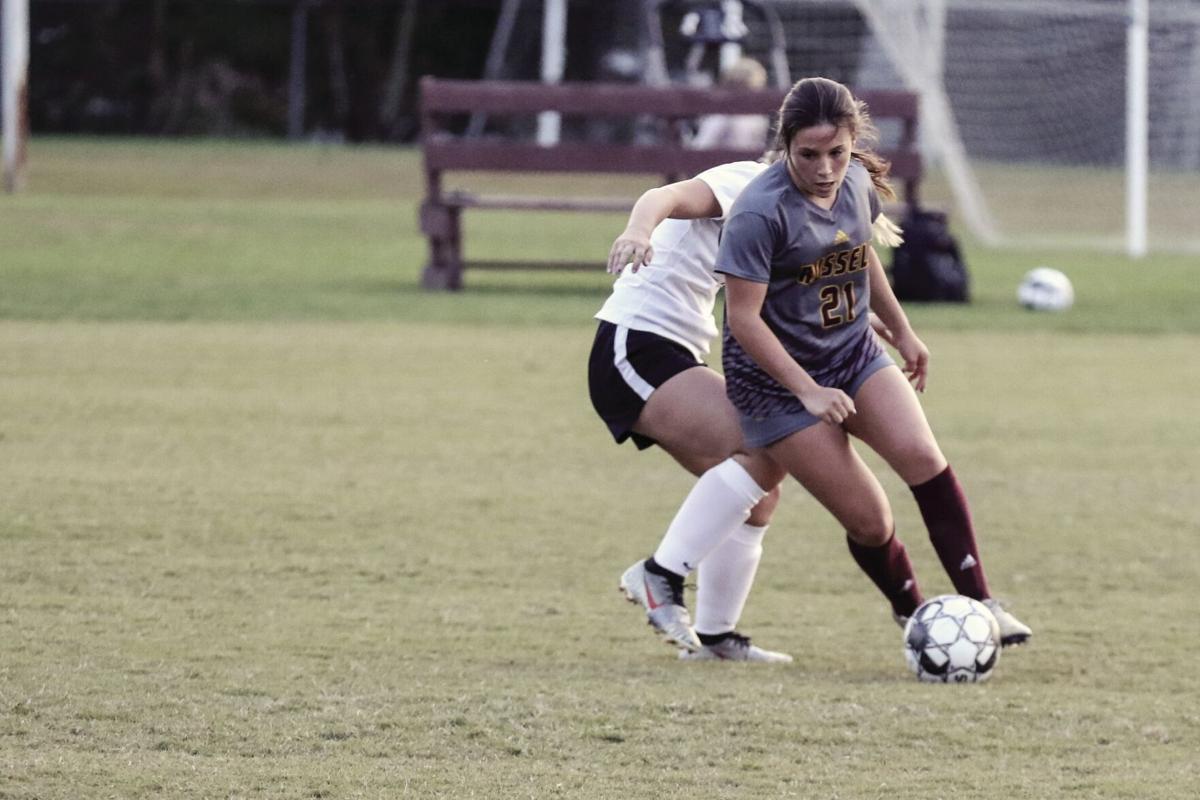 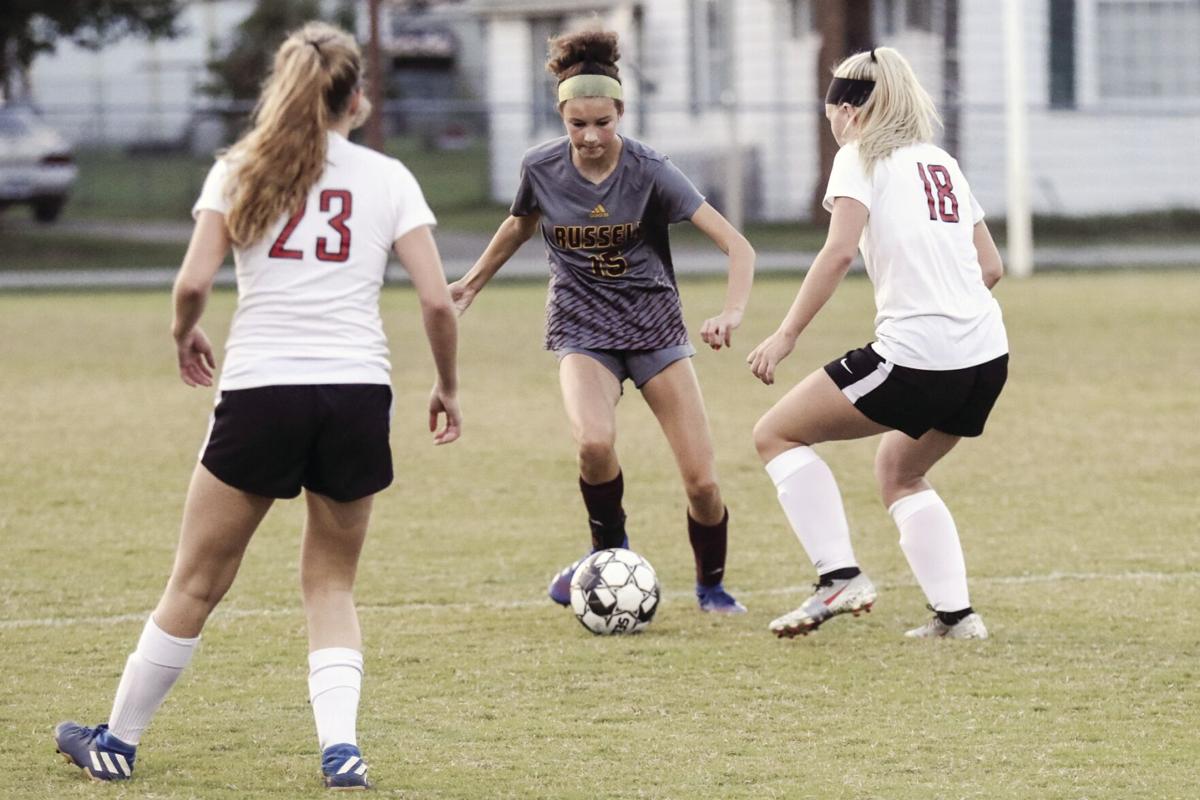 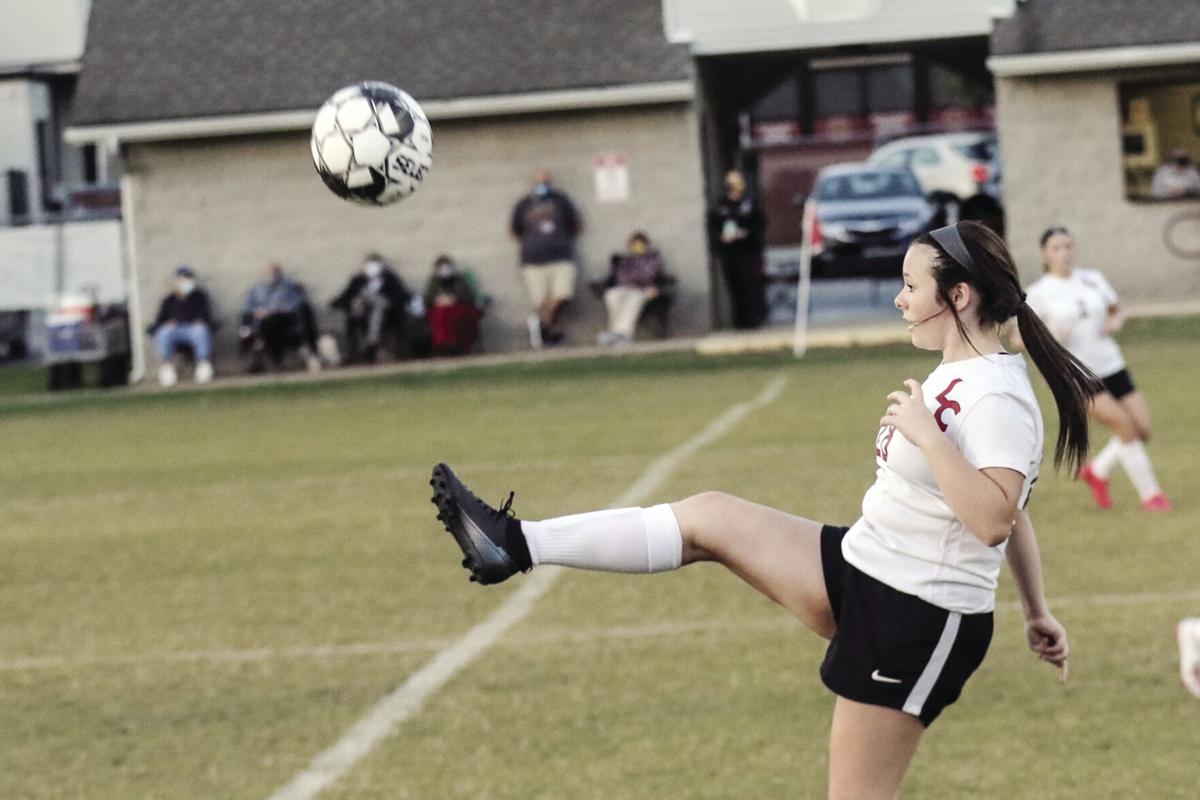 Matt Jones | The Daily Independent Lawrence County’s Laylen Hopson kicks a ball out of the air during Tuesday’s win at Russell. 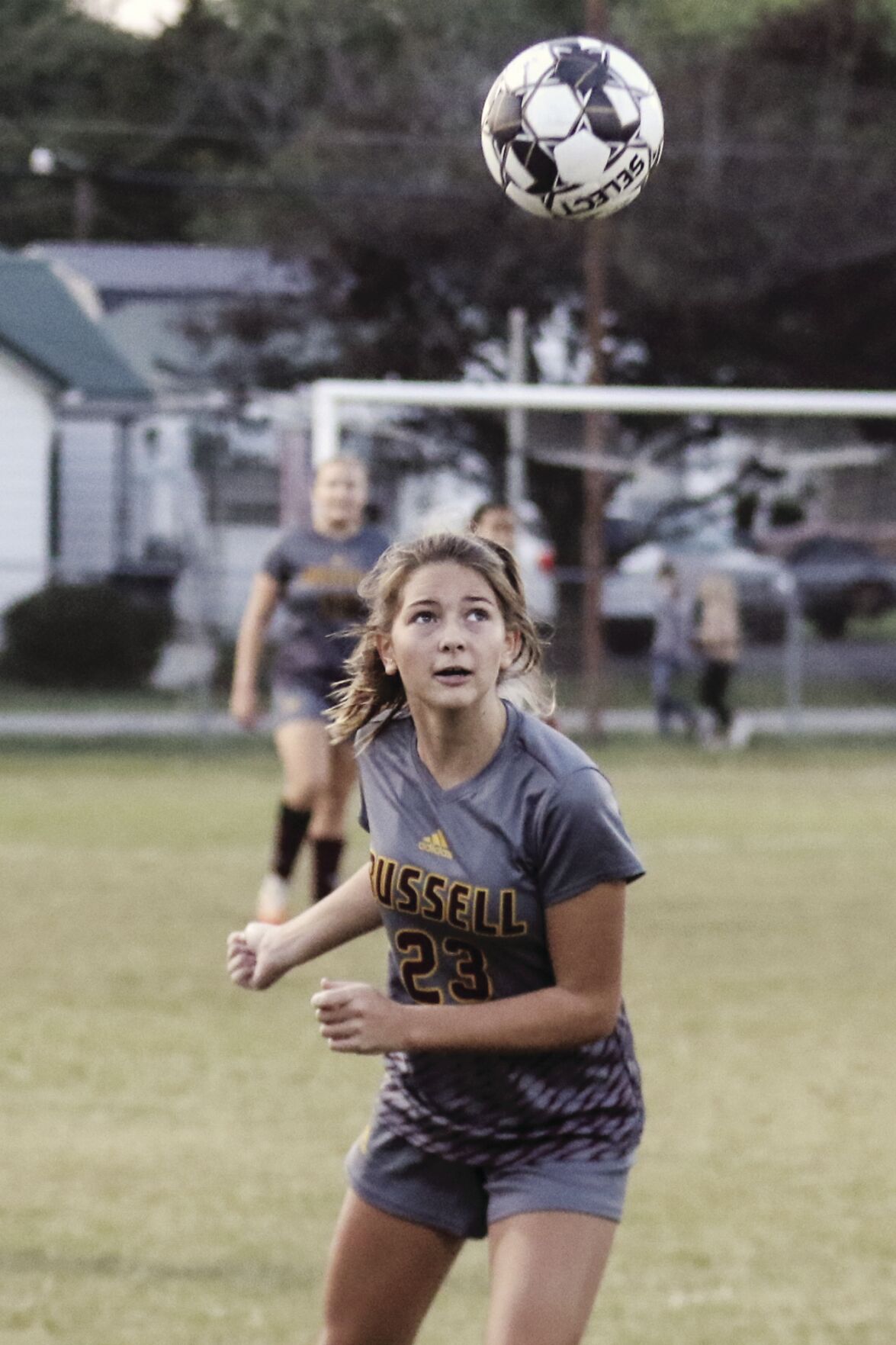 Matt Jones | The Daily Independent Russell’s Eva Blanke watches her header during the first half of Tuesday’s loss to Lawrence County. 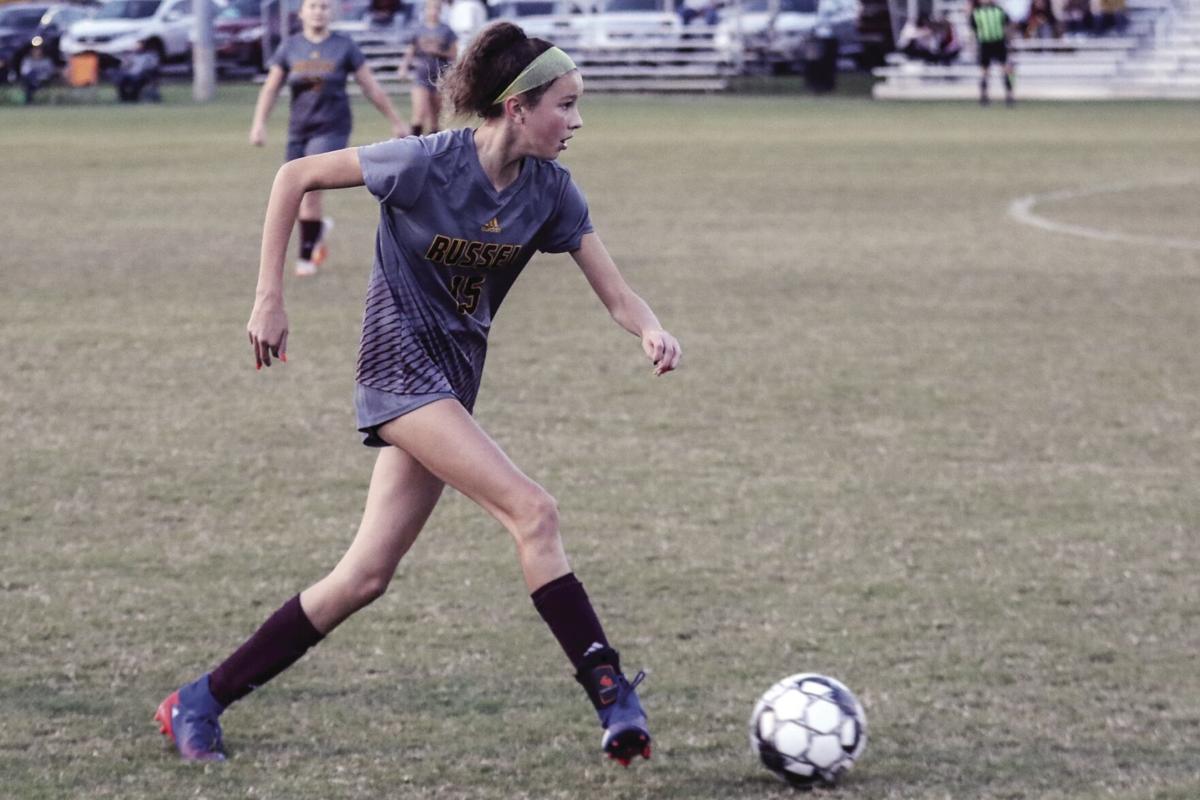 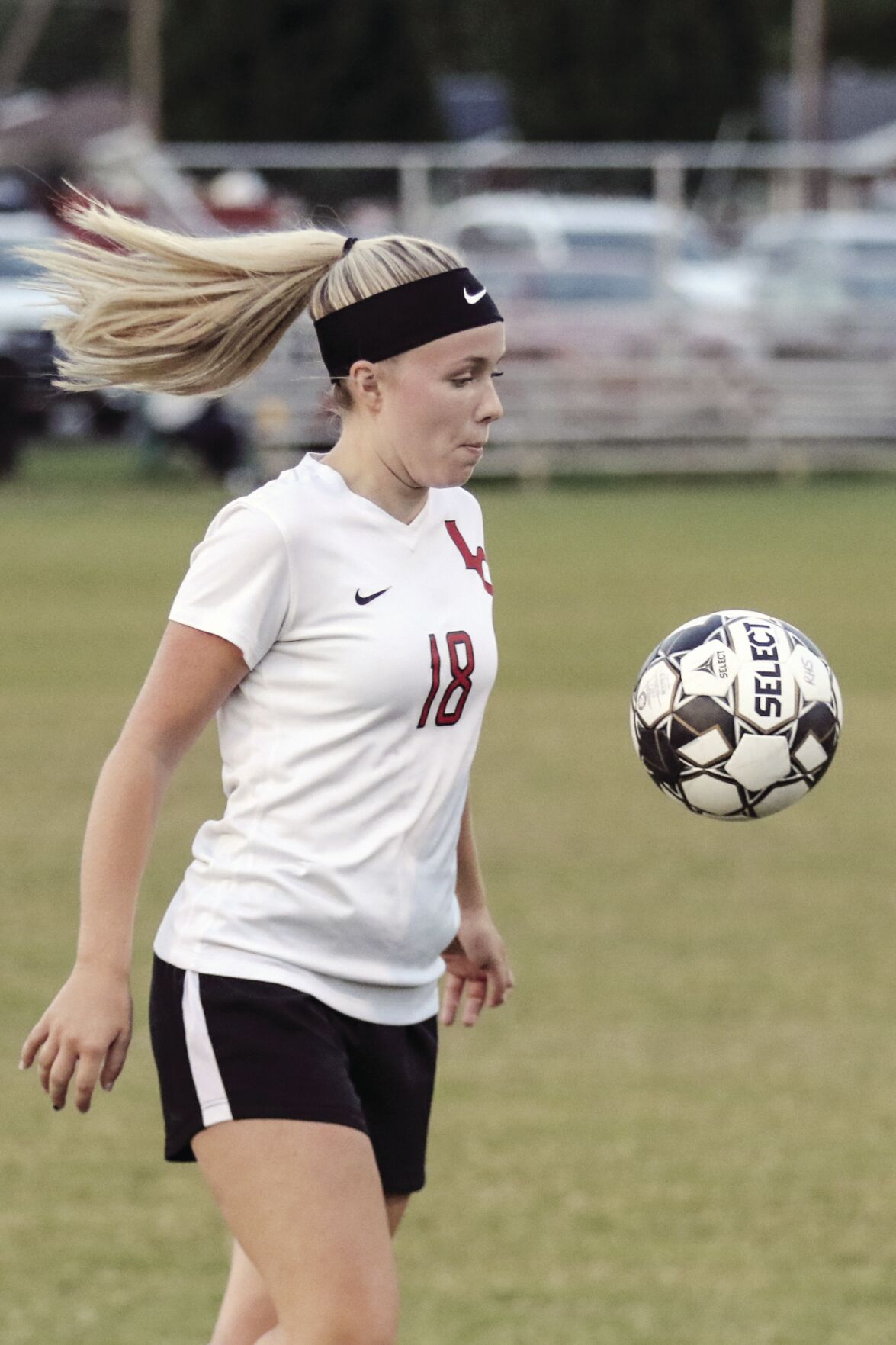 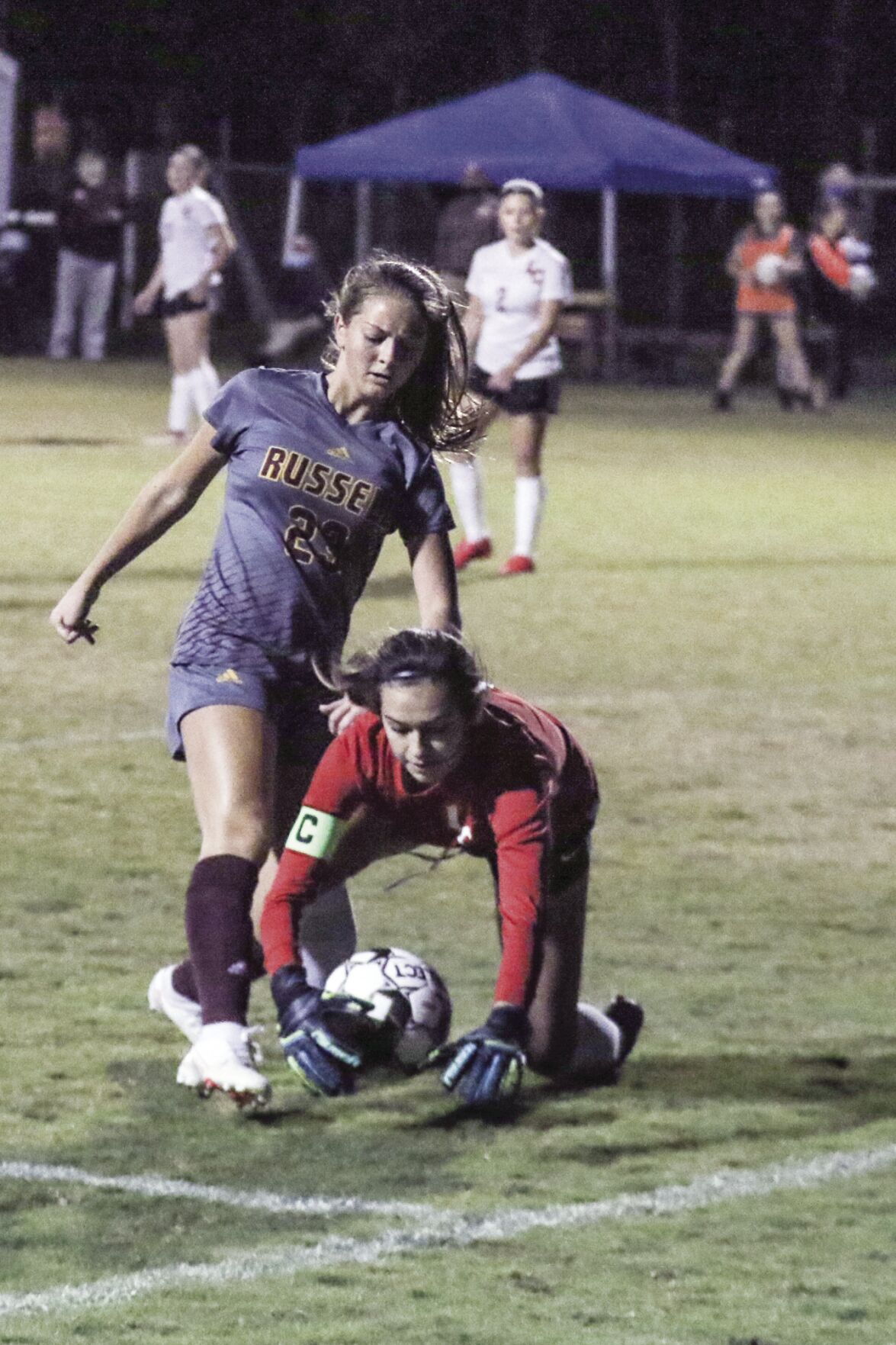 Matt Jones | The Daily Independent Russells’ Jenna Adkins and Lawrence County’s Jasmine Justice fight for control of a ball in the first half of Tuesday’s game.

Matt Jones | The Daily Independent Lady Bulldog Maggie Johnson looks for an outlet pass during the first half of Tuesday’s win at Russell. v

Matt Jones | The Daily Independent Lawrence County’s Laylen Hopson kicks a ball out of the air during Tuesday’s win at Russell.

Matt Jones | The Daily Independent Russell’s Eva Blanke watches her header during the first half of Tuesday’s loss to Lawrence County.

The Lady Bulldogs had just two shots on goal in the second half and found the back of the net on both occasions. Freshman Emersyn Elliott poked in a well-placed free kick from Ellie Webb with five minutes remaining in their contest with Russell.

It proved to be the winning tally in Lawrence County’s 3-2 win over the Lady Devils at the Russell Soccer Complex.

“This is what Lawrence County soccer is all about,” Lady Bulldogs coach Heath Webb said. “We don’t like to play from behind, but we know that we have it in us to fight back from behind if we had to. We don’t hang our heads. We find a way to dig deep and go with it.”

Lawrence County fought back from deficits twice during the match. Russell’s Lena Blanke started the scoring with a quick goal in the eighth minute. She found a clean area inside the box and blasted it through after the assist from her sister, Eva.

It appeared the score would remain the same at intermission, but Elliott mounted a charge late in the first half. With a Russell player in tow, the Lady Dawgs forward created a sliver of space and sent it in with the left foot. The game was knotted 1-1 at halftime.

“They are two fantastic players,” Heath Webb said of his two forwards. “Webb is our senior captain. She has been a varsity starter for four years. Elliott is a freshman, but they mesh so well together. When they start to connect, it’s hard for other teams to contain them because they play off of each other so well.”

A few fortuitous bounces led to goals for both teams in the second half. Ava Quinn supplied Russell (2-6-1) with an offensive attack in the 60th minute. The freshman sent a heater to the net that the Lady Bulldogs keeper couldn’t corral. The shot bounced off her mitts and the spin carried the ball over the goal line. It was Quinn’s eighth goal of the season. Blanke now has a dozen.

The Lady Devils maintained the advantage until Lawrence County mounted one final surge. Ellie Webb got the ball in scoring range with six minutes remaining and sent her team’s first shot of the final 40 minutes towards the goal. The ball ricocheted off a Russell defender inside the box and carried over the keeper’s hands for her 16th goal of the year.

One minute after her goal, Webb and the Lady Bulldogs were granted a free kick near the sideline and left of the box. Webb sailed the strike to the far post. Elliott was alone waiting on the ball and guided it into the net.

“We work on that all the time,” Heath Webb said. “If it’s on that side of the field, we have Ellie taking the kicks. She is shooting at the goal but if she misses it, we have a player running towards the back post and (Emersyn) was there to finish it.”

Russell has collected four straight setbacks, including a tie, since they clinched the top seed in the 63rd District Tournament with a 6-4 win at Ashland on Sept. 22.

Lady Devils coach John Perry will be looking for a bounce-back game when they host the LadyCats on Thursday in their regular season finale.

“We just letdown at pivotal points and let them capitalize on our mistakes,” Russell coach John Perry said. “It happens even though you don’t like to see it happen. We are having trouble finishing games this year. It’s just the way that our season has been.”

“It was just a couple of minute breakdowns,” he added. “They play a ball through and our defense can’t get back. Then they kick one from the corner and they body one in.”

Lawrence County improves its record to 7-2 and have won five of its last six matches.

“You can’t look at Russell’s record and tell anything about their team,” Heath Webb said. “Their record doesn’t have anything to do with how good they are. That is why we schedule these games with the 16th Region. … All these teams are good. It helps us prepare for our region tournament when we play the better teams in this area.”