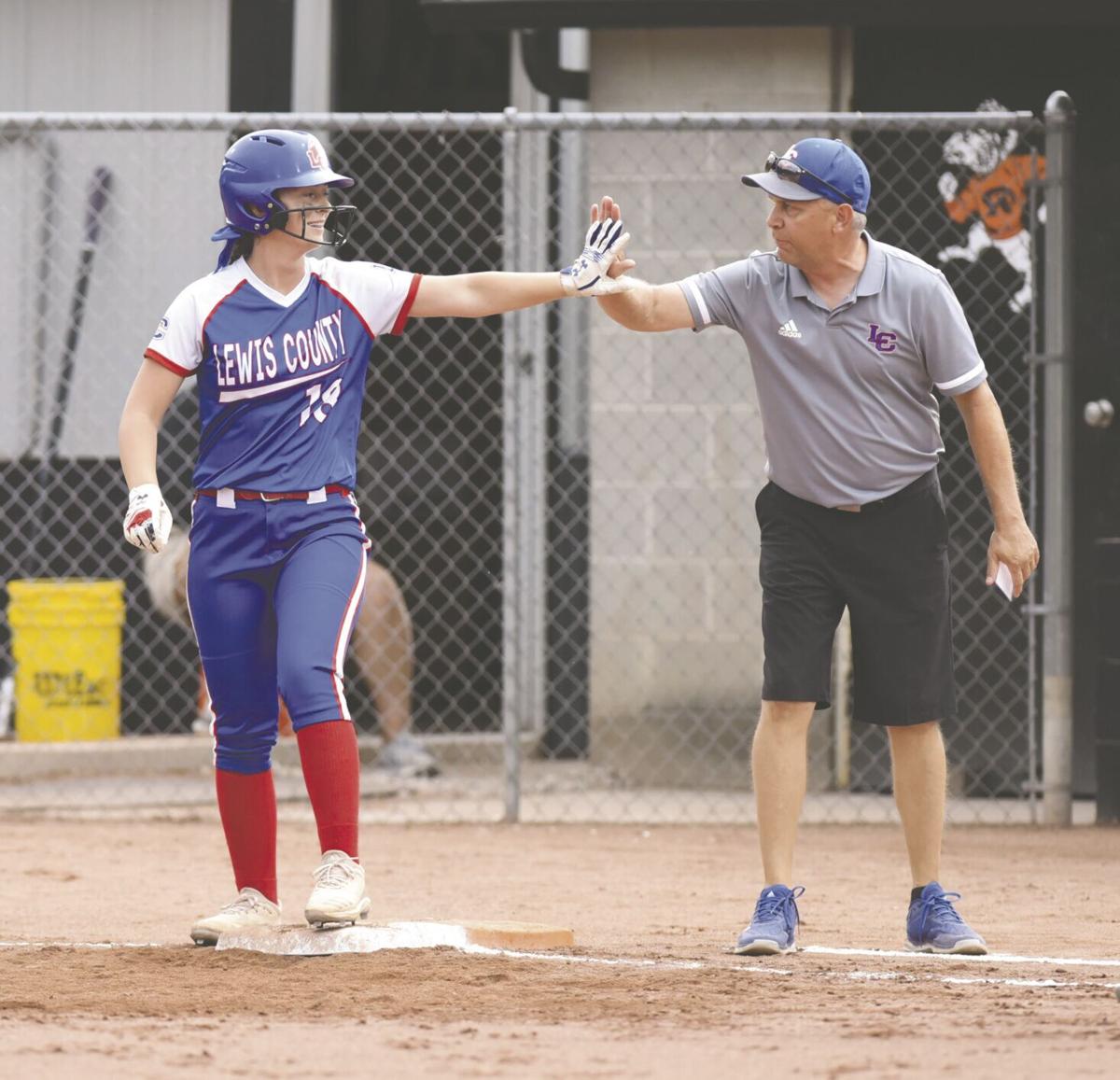 Lewis County coach Joe Hampton gives a high five to Madison Liles after a hit against Russell in the 63rd District finals at Raceland on June 1. 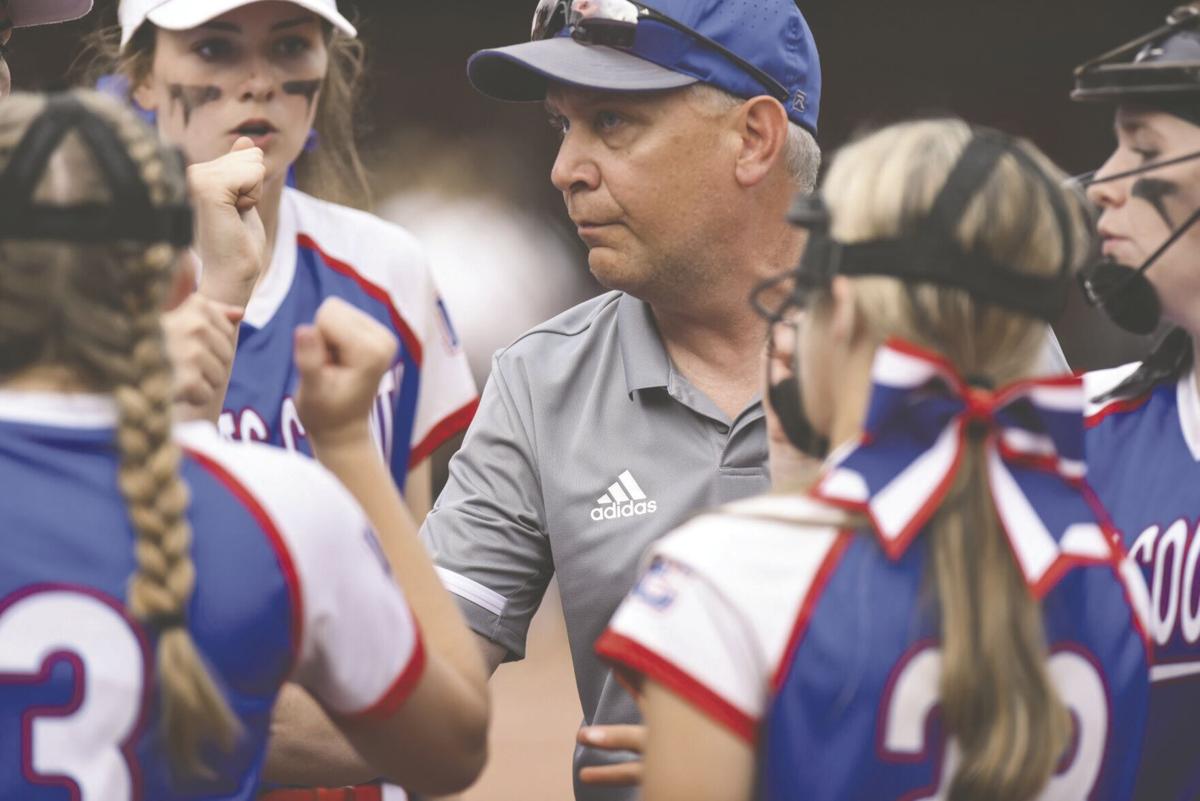 Lewis County coach Joe Hampton talks with his team between innings during the 63rd District championship game against Russell on June 1. 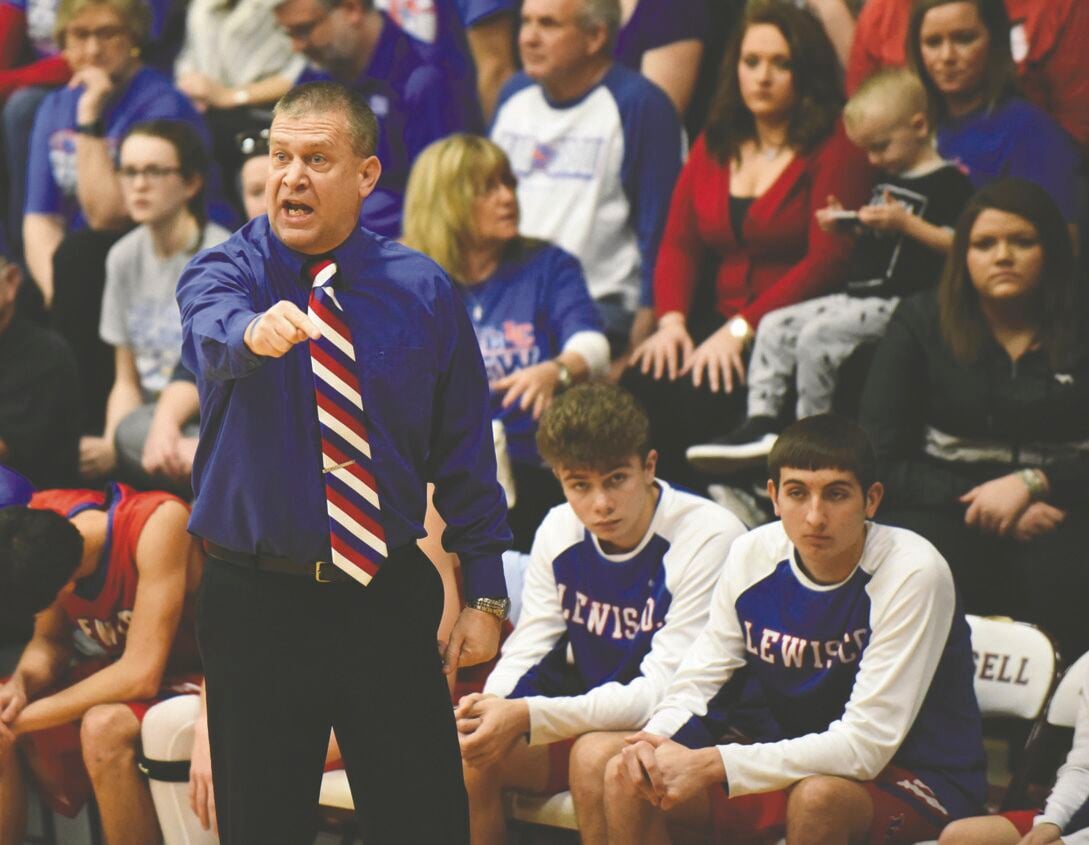 Lewis County coach Joe Hampton shouts instructions to his team during a game against Russell on Feb. 20, 2018. Hampton won a program-best 279 wins, eight district titles and made two trips to a region final in his 21 years on the sideline. 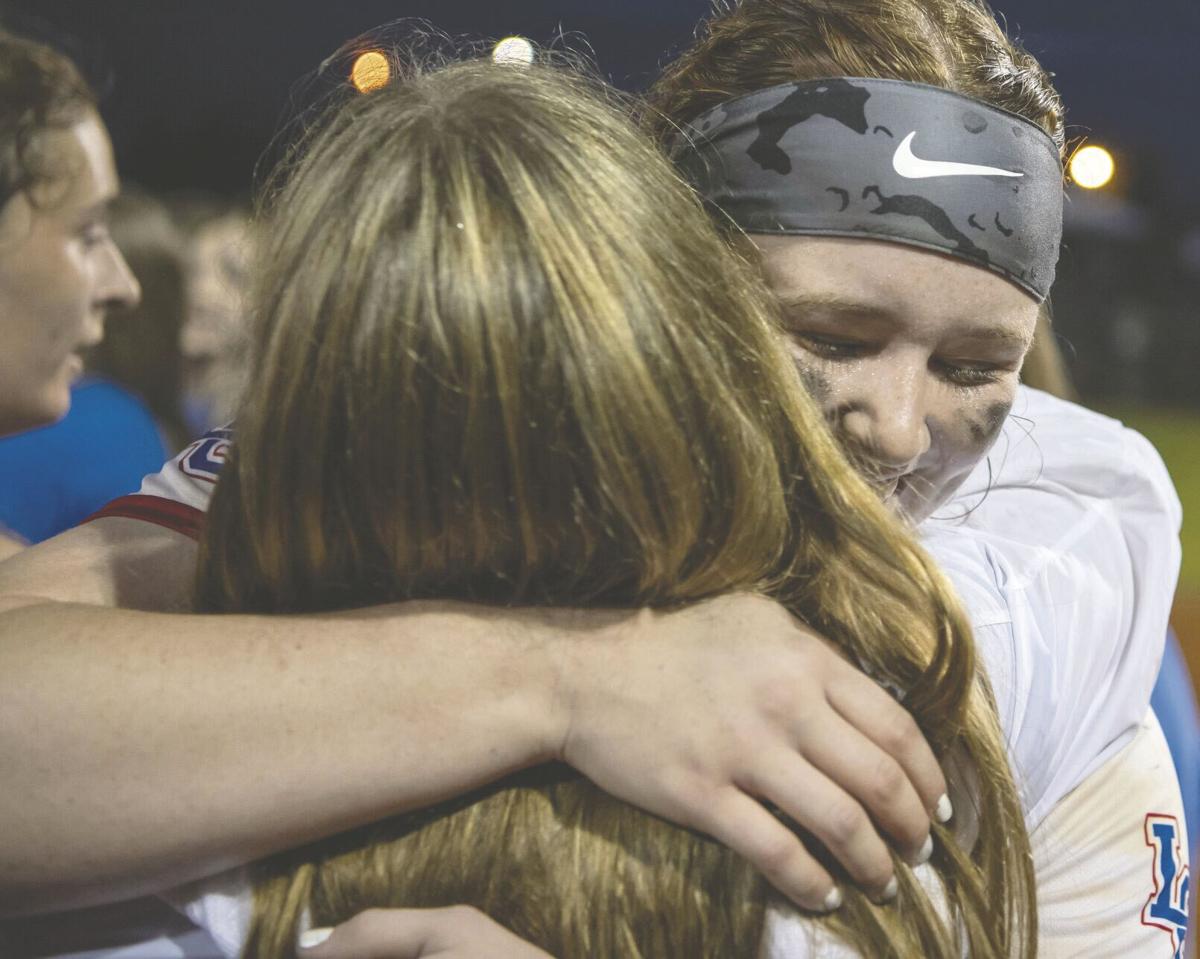 Lewis County Emily Cole gets a hug from a teammate after the Lady Lions won their first region title on Tuesday. 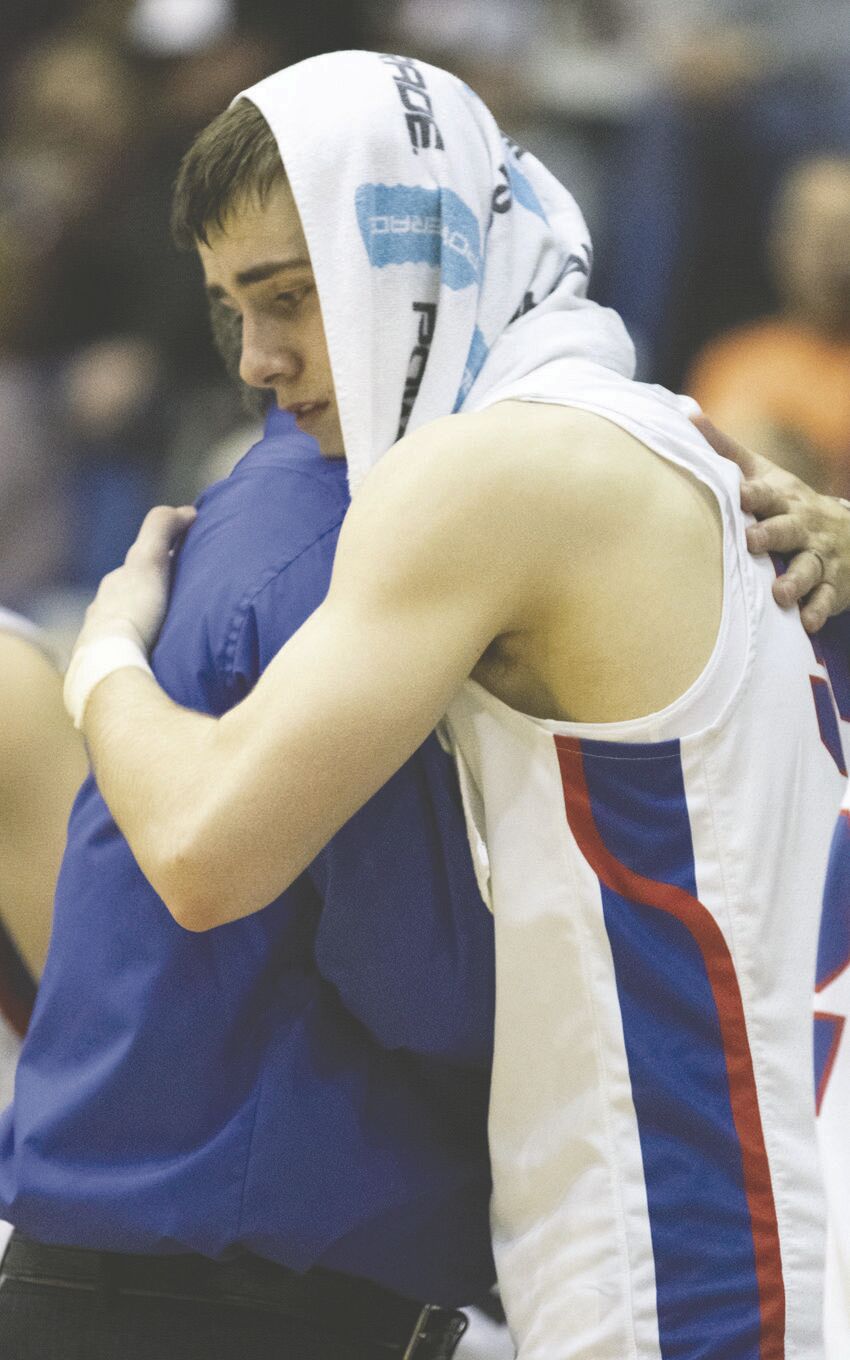 Lewis County coach Joe Hampton gives a high five to Madison Liles after a hit against Russell in the 63rd District finals at Raceland on June 1.

Lewis County coach Joe Hampton talks with his team between innings during the 63rd District championship game against Russell on June 1.

Lewis County coach Joe Hampton shouts instructions to his team during a game against Russell on Feb. 20, 2018. Hampton won a program-best 279 wins, eight district titles and made two trips to a region final in his 21 years on the sideline.

Lewis County Emily Cole gets a hug from a teammate after the Lady Lions won their first region title on Tuesday.

COVID-19 was in its early stages and the previous Lady Lions skipper had just resigned prior to the season.

Lykins had one candidate in mind. He did not possess an extensive knowledge of the game. But he was a proven winner, a leader and already a Lewis County legend.

“Joe Hampton is the best coach in the region,” Lykins said. “He told us that he didn’t know a lot about softball. I told him that we didn’t need an expert on softball. We needed someone who knows how to manage kids and how to manage a program.”

Hampton patrolled the basketball sideline in Vanceburg for 21 seasons, seven more as an assistant coach. He amassed a program-best 279 wins, eight district titles and was the longest-tenured active coach in the 16th Region before he retired.

Hampton was more than qualified to lead a team, but he was left wondering if his coaching experience on the court would translate to the diamond.

“Make no mistake about it, I am a basketball coach that is coaching softball,” Hampton said. “When I took this job, I knew my what strengths and weaknesses were and where they would fall in softball. I feel like my biggest contribution is how to coach a team regardless of what that team may be. That’s been my role in coaching and my mindset.”

He shared his state tournament dream with his new ball club. The Lady Lions overcame a 12-inning semifinal performance to win their first-ever region softball title with a 6-4 victory over Ashland on Tuesday. It was also the first region championship in any Lewis County sport since 1977.

Hampton said the season success is a direct result of the hard work of those around him, including the coaching staff, the players and the parents that helped out during the uncertainty of last year.

“I’m just steering the ship,” Hampton said. “Dan Stevenson, Trayla Liles and Marty Cole all have a vast knowledge of softball that I don’t have, regarding fundamentals, strategies and game situations. They have a ton of experience that I lean on heavily. We like to make these decisions together. It’s a total staff effort. I’m just a guy sitting at the front of the bus with that title. I feel like we work great together.”

Hampton retired from his teaching and athletic director duties at the end of the 2020 school year. The Lions reached the basketball region final last March for just the second time in school history, but fell to a hot-shooting group of Tomcats.

After walking off the Morehead State hardwood for the last time, Hampton was not sure he wanted to close the door on his coaching future.

“At that point, I had an option to still coach basketball even though I was retiring,” Hampton said. “With the (basketball) season that we had, I thought it was the perfect time to step away from all of it.  At the same time, I knew our situation with softball. We didn’t have a coach. … We had so many parents that picked up the slack. They continued to work out these girls and did whatever they could.”

Hampton said he reluctantly accepted the position but has loved it every second since. It took a couple of days for the coaching desire to resurface after he witnessed the stellar personnel on the roster.

With the restrictions and COVID-19 mandates from the KHSAA, Hampton and the team did not come together until late January.

“I felt like I didn’t know enough softball to take on that task,” Hampton said. “I agreed to it, and we got two days in for tryouts. I saw enough and I really liked the work ethic and there was plenty of talent there.”

He still wanted to do what was best for the program. After the 2020 season was canceled, he informed Lykins to look for “a real softball coach” but kept his name on the list.

It didn’t matter. Lykins already had his guy.

“Joe was only hired for one year (at that time),” Lykins said. “It was more of a fill-in. We never went out and looked for anybody else. We never pursued anybody else. When we didn’t have a season last year, I told Joe to plan on coaching next year.”

Added Hampton: “After my retirement, you have to be away from the school for 90 days. After that was over, (Superintendent Jamie) Weddington and Mr. Lykins talked to me again about the job. I talked to Dan and Trayla about it and if we could get the right people around me, we would have a good year.”

Hampton said his coaching philosophies will never change. It doesn’t matter how much experience you have; you still have to establish a comfort level with your team.

“My coaching expectations regarding hustle, effort and being coachable do not change,” Hampton said. “There is a difference coaching males and females. There is no doubt about it. I met some of these girls, but it takes a long time to get them to trust you. Most of them knew me from being a basketball coach. You still have to gain that trust. They have to know that you are making the right decision for them.”

Cole’s value to the team extends way beyond balls and strikes, according to her coach.

She missed four games late in the season with a hand injury and the Lady Lions dropped them all. Hampton said the team struggled with morale and adversity during that short stretch and the club came close to hitting rock bottom.

Lewis County (21-8) won seven of their final nine games upon her return and the Lady Lions are now firing on all cylinders.

“You can look at our record up to the point where she got hurt against Greenup County until she returned against Bracken County,” Hampton said. “You can see how important she is to us. We did get better defensively with her out because we got a lot more balls hit to us.”

Hampton coached a basketball player in recent years that can draw comparisons to Cole. Sam O’Keefe was named the 16th Region KABC Player of the Year in 2020, and when the Lions needed a big bucket, his number was usually called.

“Emily knows a heck of a lot more softball than I do,” he continued. “I would never advise her on her rise ball or anything else. But when I tell her something, she will look me in the eye, acknowledge what you are saying and will do everything you ask her to do. Sam was the exact same way. Both are a coach’s dream. It is so important to have that trust. … It can be a great combination.”

Lykins has seen first-hand the effect Hampton has had on his players and the confidence they have playing for him over his career. It has not changed with his new gig.

“Those girls absolutely respect him,” Lykins said. “He has earned their respect. He knows how to treat kids.”

Lewis County made its second straight trip to the region tournament, but it hadn’t tasted the big stage before that since 2008.

Hampton hopes his team can lean on his postseason experience but realizes that the Lady Lions are advancing into territory he’s never been before. Lewis County will face Wolfe County (23-9) today in the semi-state round at John Cropp Stadium in Lexington at 11:00 a.m.

“With my experience, I tried to help them every way that I could,” Hampton said. “Now we are going to the next level that I have no experience with. The lights get brighter. There is no replacement for experience. I hope my experience helps some of these young girls by talking to them about what to expect. Every game you play is a bigger game and every team you play from a certain point will be a better team.”

The community has embraced the softball team. The Lady Lions were met with a police escort during their return trip from Flemingsburg.

“It was a great win,” Hampton said of the region championship. “I was more happy for Marty. He has put in so much time and hard work. The girls have worked so hard. It made it worthwhile for me. I know how many hours they put in. I know what it takes to get to that point. We never got past it until now. … I got to see that moment fulfilled for them. “