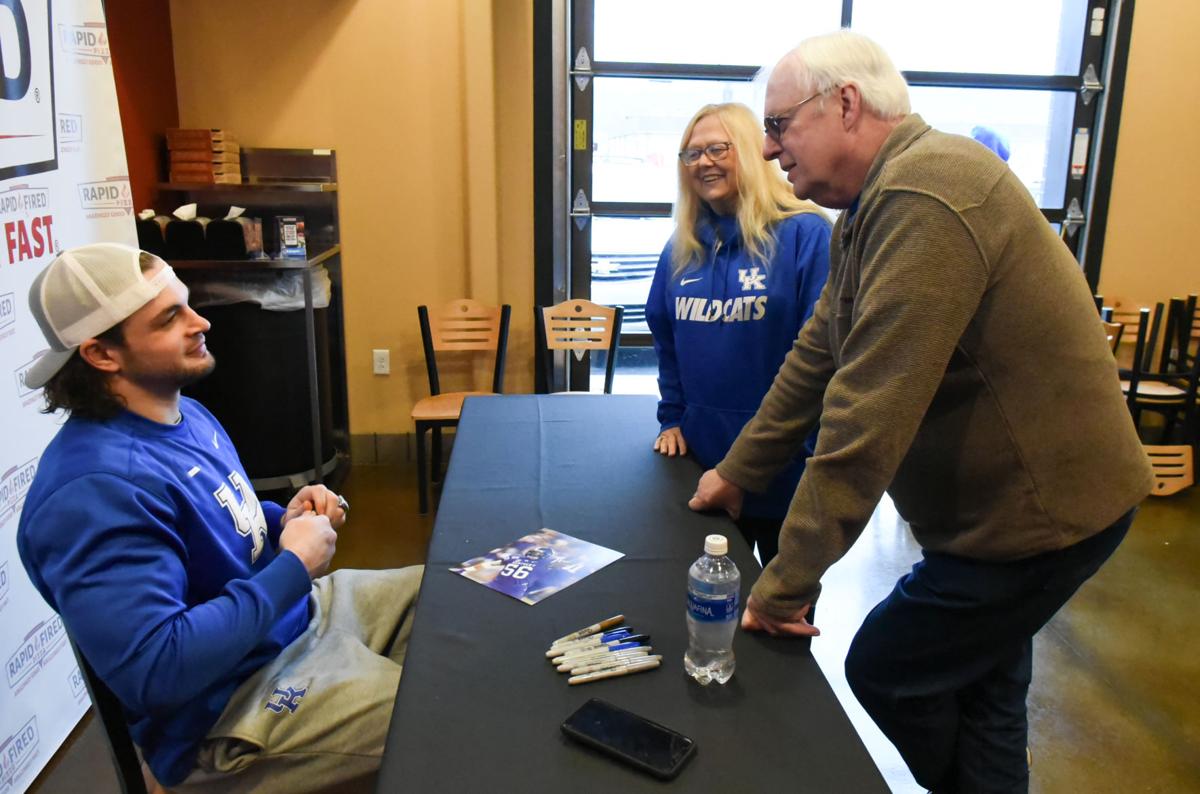 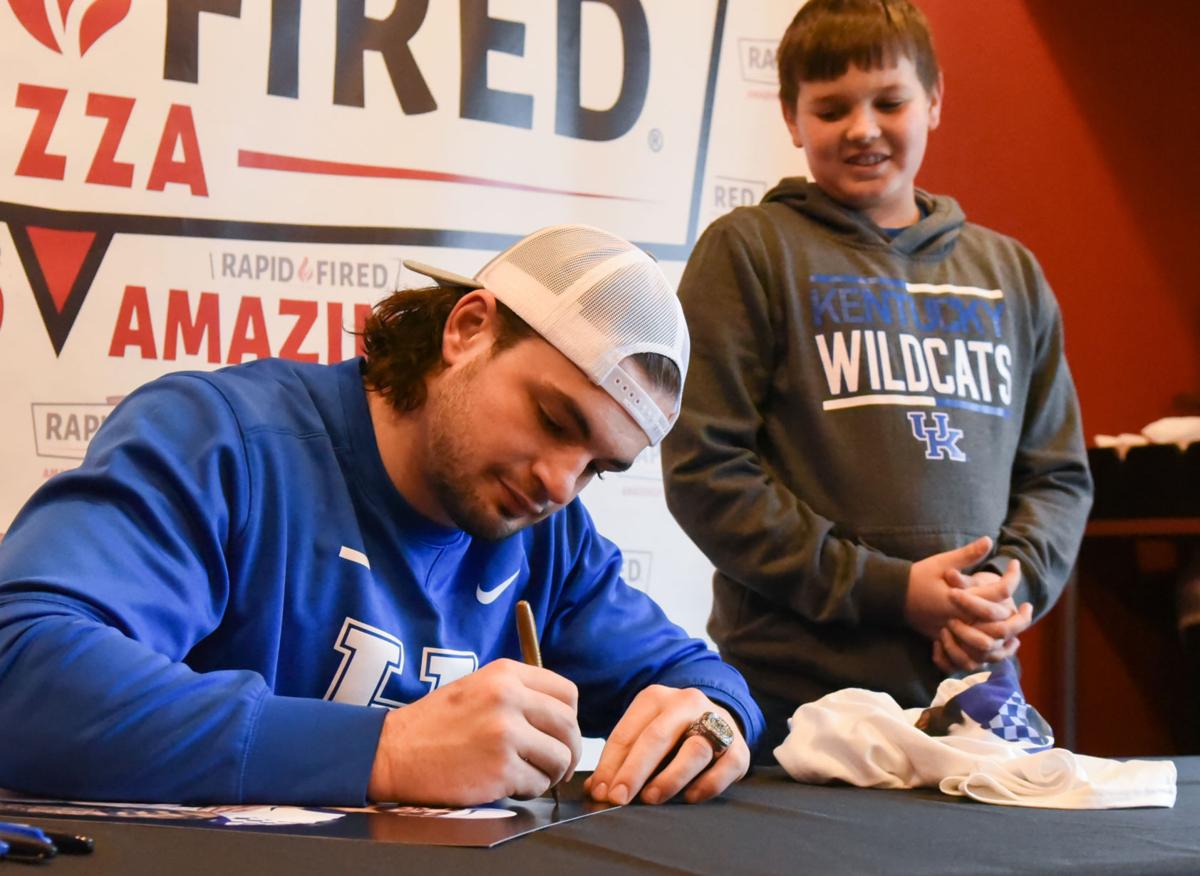 Zack Brown of Russell looks on with a smile as former University of Kentucky football player, Kash Daniel signs an autograph on Saturday at Rapid Fired Pizza in Ashland, Kentucky. MARTY CONLEY/ FOR THE DAILY INDEPENDENT 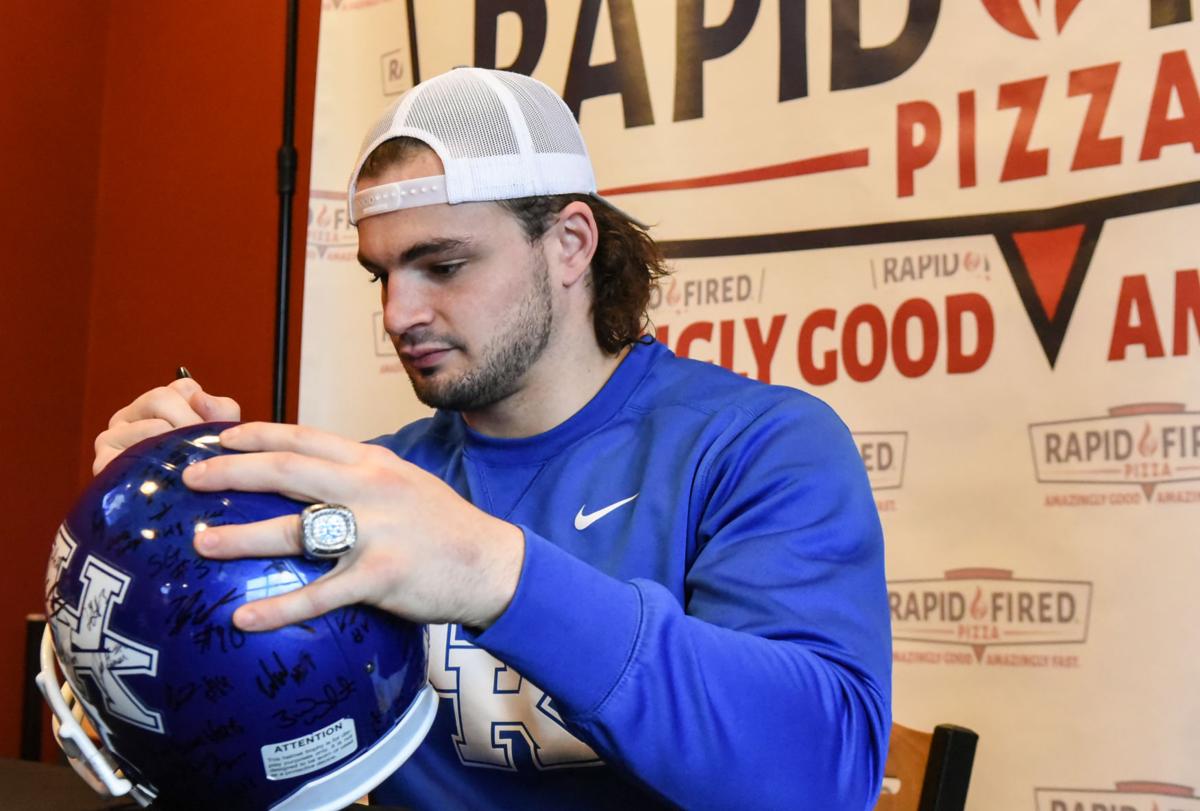 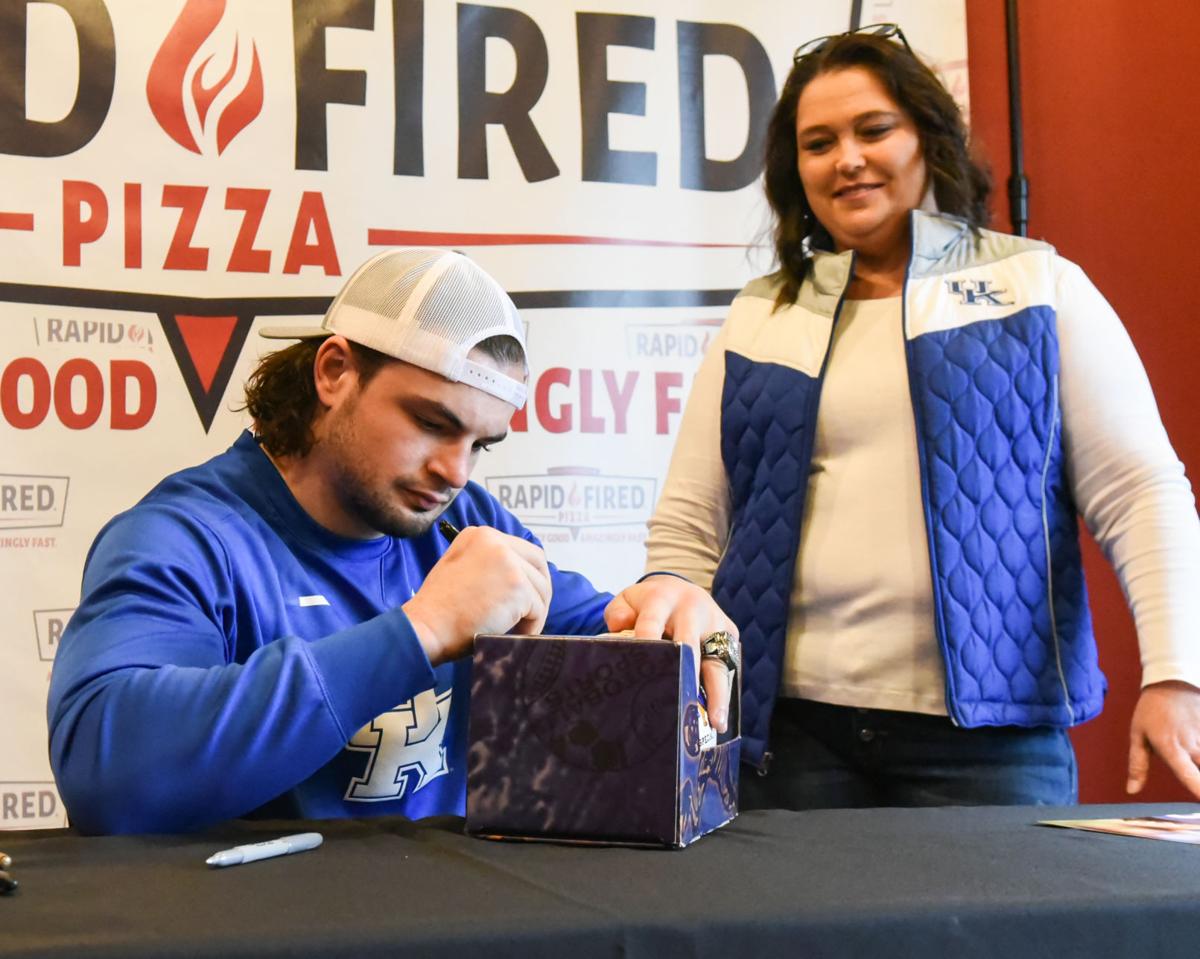 Zack Brown of Russell looks on with a smile as former University of Kentucky football player, Kash Daniel signs an autograph on Saturday at Rapid Fired Pizza in Ashland, Kentucky. MARTY CONLEY/ FOR THE DAILY INDEPENDENT

ASHLAND Former Kentucky linebacker Kash Daniel said his time in Lexington went by in a flash.

Even quicker than the time it takes to make a tasty pie at Rapid Fired Pizza.

The pride of Paintsville stopped by the restaurant on Saturday afternoon to greet fans and sign autographs. He’s in the final leg of his Blue Roots Tour and feels it’s a privilege to meet those that have supported him through the years.

“It’s great to see how much love there is around the state for UK football, as well as the players and UK athletes in general,” Daniel said. “To see the smile and the joy in the people’s faces when they come to see me, that’s what it is all about. I love meeting all these great people and hanging out with them when we come to see them instead of them coming to us.”

Daniel raked in the accolades after a stellar career as a Paintsville Tiger. He was named Kentucky’s Mr. Football in 2015, The Daily Independent’s All-Area Player of the Year, Kentucky’s Gatorade Player of the Year and a high school Army All-American before pursuing his dream to play for the Wildcats in the SEC.

“It’s been a dream for sure and I’ve worked my tail off to get there,” Daniel said. “It’s the highest level of college football. Every day you have to bring it because if you don’t, you’re going to get exposed and they will eat you alive. Keeps you on your toes 24/7.”

Jim and Sherry Potter of Russell were first in line to meet Daniel and have him autograph a picture for their 2-year-old grandson.

“We wanted to get a picture signed for our grandson and tell him how much we appreciate him representing eastern Kentucky,” said Jim.

“He likes all the football players,” he added, “but Kash, since he’s from Kentucky, is special.”

Sherry said even at a young age, he can recite the popular Kentucky chant.

The Wildcats produced four straight winning seasons during Daniel’s tenure in blue and white, including Kentucky’s third 10-win season in school history two years ago and the first since 1977.

Daniel played in a bowl game all four seasons in a Wildcats uniform. Kentucky won the last two, both in dramatic fashion.

He said he is proud to be part of the program’s resurgence.

“It means a lot because I know the ups and downs of Kentucky football,” Daniel said. “Growing up here and seeing how the program has been. I believe in what coach (Mark) Stoops and his staff are doing. I think we have built the program, not just a two- or three-year good team. He is getting better recruits each and every year. The coaches coming in do nothing but further this program. I was blessed to be a part of it and lay a foundation for the guys for years to come.”

Daniel has definitely made an impact on young Zack Brown of Flatwoods. The 13-year-old also plays linebacker at Russell Middle School.

“Kash is my favorite player,” Brown said. “I play linebacker too and I like the way he plays.”

His mom, Tracie, knows what it meant for her son to see his favorite player.

“He loves UK and he loves football,” Tracie said. “My husband had to work, but said to make sure you bring Zack down here. He deserves it. This is once in a lifetime. Here in our little small town, we don’t see these players. When they come here, we really appreciate that. They have a huge fanbase and for them to come to our small town to see us, it’s special.

“Zack loves football, so it was perfect to come down here and see one of the players he sees on television. It’s an awesome experience for these kids.”

Tracie had a message for Daniel.

“When a player from our area is doing as well as he is, that says a lot,” Tracie said. “We are proud of him.”

Daniel said he’s had so many memories during his UK career. The bowl victories stand out and ending the 31-year losing streak to Florida in Gainesville where he famously did his celebratory Stone Cold Steve Austin impression.

Above all that, the camaraderie with his teammates stands out most of all.

“The overall highlight is the bonds and the relationships that I have made with my teammates and my coaches,” Daniel said. “Anybody that has been a part of this journey over the last four or five years, it’s been very special and I will miss it a lot.”

Daniel is preparing for Kentucky’s Pro Day on March 27.

“I’m just doing whatever I can,” Daniel said. “I am training my butt off (with my strength coaches) at UK because these guys have built me. They know my body better than anybody. I believe and trust what they do. ... We have everything we need at home.”