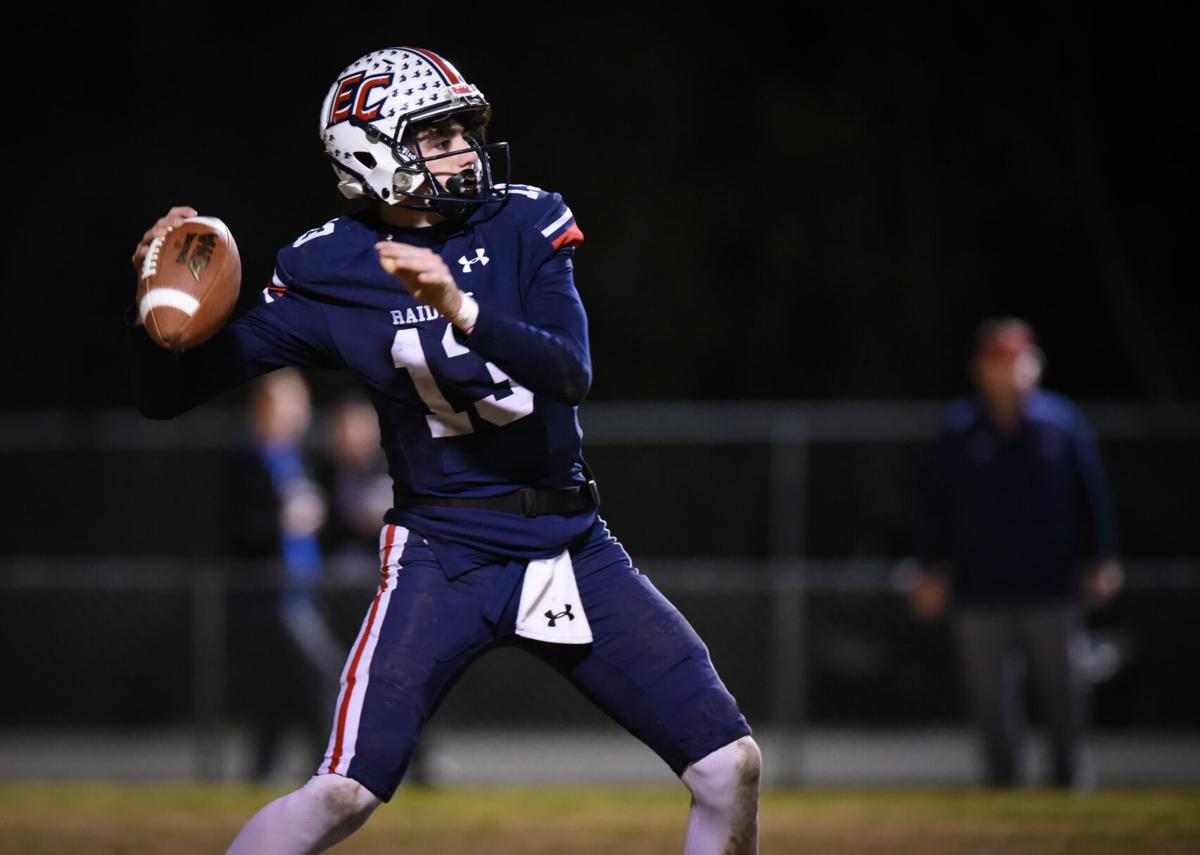 East Carter quarterback, Kanyon Kozee throws a pass against Ashland on Friday evening during the District 7 Championship game in Grayson. MARTY CONLEY/ FOR THE DAILY INDEPENDENT 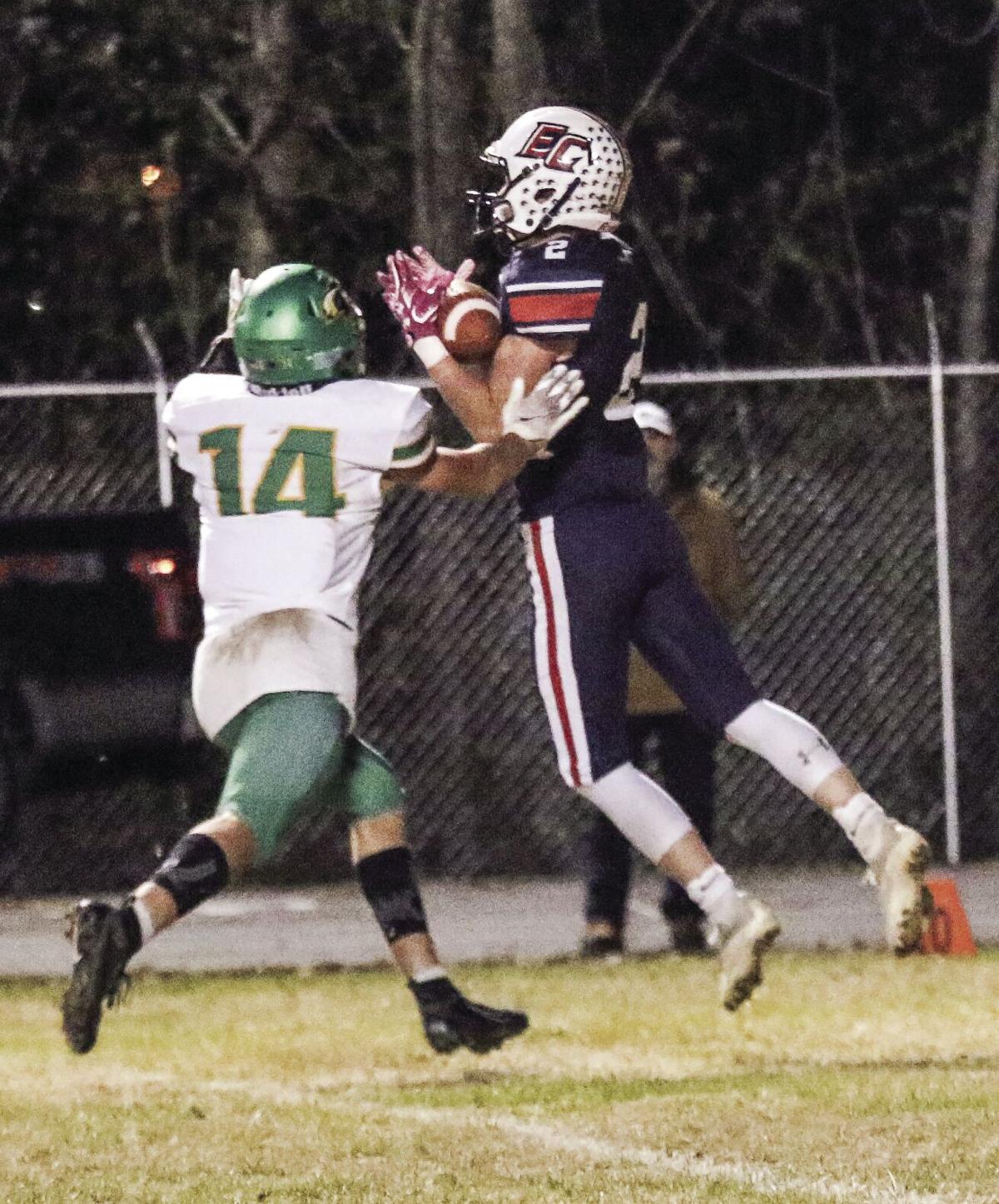 East Carter quarterback, Kanyon Kozee throws a pass against Ashland on Friday evening during the District 7 Championship game in Grayson. MARTY CONLEY/ FOR THE DAILY INDEPENDENT

GRAYSON East Carter was 27 years removed from its last district title on the gridiron when young Connor Goodman and Kanyon Kozee first donned a football helmet.

The duo ascended through the youth leagues and middle school dreaming of the day they would get their chance to help the Raiders reach the top of the mountain again.

Kozee has played quarterback his entire career and the majority of his passes have found the hands of Goodman. In their final season, the seniors did not want their last chance at making history to pass them by this fall.

“I get to throw to a guy that I have thrown to for 11 years,” Kozee said. “It’s been a long time. It feels great to do it on the grandest stage and do it on our home field. We get to do it for a team that we have a lot of pride for.

Both joined the varsity roster in 2018. They had to bide their time before reuniting as main contributors to the East Carter offense this season. Goodman feels the pair didn’t miss a beat after a decade of sharing the football field together.

“We started playing in second grade and he has always been the quarterback who is throwing me the ball,” Goodman said. “We have played together for so long. He knows what I like to do, and I know what he wants to do. It feels like we can read each other’s minds.”

Goodman collected just five catches and 36 receiving yards during his sophomore and junior seasons. The production has monumentally increased this year with 32 receptions for 630 yards and four touchdowns.

“I knew I didn’t have a great year (last year),” Goodman said. “I really wanted to step up and be a bigger leader this season. It really helps to be in the weight room and working with coach (Charles) Brown on getting my speed training up. It helps me to get more space and catch the ball.”

Coach Tim Champlin referenced Goodman’s quick instincts and superior route-running for his ability to get open. He is just as skilled at catching the football in a crowd.

“He can create separation, no matter the matchup that he has with his defender,” Champlin said. “He does a really good job of focusing in and catching footballs. He almost does a better job making the acrobatic catches than the simple, easy catches. He has put a lot of work into his position.”

Added Goodman: “Coaches give me the best shot to get open by calling great plays. A lot of it is getting leverage on the defense. If you feel if they are playing inside leverage, you cut outside. It’s important to read the defense.”

Kozee and Goodman spent the majority of their summer polishing their timing and their skill set. The senior QB has also developed an elusiveness in the pocket. If it starts to collapse, he knows No. 2 will be open downfield.

The quarterback also quipped that helps the stat sheet.

“Connor runs great routes, and he is really fast,” Kozee said. “He’s not the tallest receiver and sometimes people underestimate that. He makes them pay for it. Honestly, I don’t know how Connor gets that open on some of his routes. He can run a simple go route and I look up and he is wide-open. He burns his opponents every time. It actually pads my stats more having a guy like Connor.”

The pair hooked up four times last Friday against Ashland for 80 yards. Charlie Terry found the end zone on four separate occasions, and Kozee and Goodman made key plays to help keep the chains moving.

East Carter defeated the Tomcats for the first time in school history and claimed just their second district title — the first since 1983.

The Raiders hope to keep rewriting the record books when Mason County travels to Steve Womack Field tonight for a state quarterfinal showdown. East Carter has never hosted a game this late in the season.

“It feels like my dream has come true,” Kozee said. “At the high school level, most players don’t come close to this happening. Going through YFL and middle school, we have been the team to beat. It feels good to earn that top dog spot again.”

Goodman expects another electric atmosphere similar to the one they experienced against Ashland. The Raiders received 200 free T-shirts to worn by the pep section.

“It’s been amazing,” Goodman said. “Coming to the varsity team as a freshman, I never thought we would have a chance to play for a spot in a final four game.”

The road to the victory was met with a few speed bumps. Goodman tried out several positions before landing at wide receiver.

“I came in and started playing running back,” Goodman said. “I even played quarterback. I’ll play where the coaches think is best for me. I wanted to do everything in my ability to help the team win.”

Goodman plays point guard on the basketball team and in the outfield during the spring. Champlin knows the impact of playing multiple sports. Skills can translate on different playing fields.

“He has great instincts,” Champlin said. “A lot of that is from playing football and basketball for as long as he has. He understands how to get open. It’s something that we don’t talk a lot about when you are dealing with two- or three-sport athletes. They know how to play against a man-to-man team or a zone team. It’s just from the reps they get in other sports.”

Kozee became the starting quarterback last season. The slate had already been postponed due to COVID-19, which allowed the Battle for the Barrel to be the initial game of his varsity career.

The Raiders left Olive Hill with a 43-0 loss, but Kozee would not let one game deter his mission.

“That night was definitely a tough one,” Kozee said. “I got down on myself after that one. You can’t let it eat you alive and I let it for the whole season. I might have gotten progressively better throughout the season, but it was still on my mind this year. Those thoughts are gone, and I am playing one game at a time. I keep thinking about the next game. You can’t dwell on those things.”

Kozee did improve and the offense prospered. East Carter won the next three games and scored 142 points in them. It provided a stepping stone for the current 10-win season in 2021. It’s the first time the Raiders have reached double-figure wins since 1989.

“It was his experience,” Champlin said of Kozee. “It’s his knowledge of the game, understanding situations and his calmness under pressure. He does a good job of operating the offense.”

Kozee has added a rushing element to his repertoire. He rushed for minus-15 yards as a junior in a shortened season. His current total stands at 354 yards to go along with three rushing touchdowns.

“If you ask Champ, he hates it,” Kozee chuckled. “I’ve always felt like I was a good runner. It’s different for me because I can’t get injured. I like that I get to run the ball a little more. I feel like I open up the offense.

“It only helps Charlie because most defenses key on him. It helps us get down the field and gives defenses a little more to worry about.”

“As a defensive guy, you are always talking about fits,” Champlin said. “When you have a quarterback who runs the ball, it adds an extra fit that you are not used to accounting for. It changes how you do things. … It makes people honor his ability to run.”

Kozee and Goodman also have an effect on opposing quarterbacks in the defensive backfield. Goodman has four interceptions, including a pick that sealed the win against Ashland last week, and Kozee has recorded three more.

“Those guys are two of the best that we have had here,” Champlin said. “Kanyon is long and plays the middle of the field well. Connor also plays center field in baseball and that is huge for someone playing the defensive backfield. He knows how to judge a ball in the air.”

Kozee said the key for the Raiders all season has been a positive outlook. The struggles of yesterday have only made East Carter stronger today.

Just like their explosive offensive, the Raiders want to keep moving forward.

“It’s hard to avoid a letdown, but it’s easier to build on it,” Kozee said. “You have to keep thinking positive. You can’t let negative thoughts enter your mind. You learn from losses just as much as you learn from the wins.”