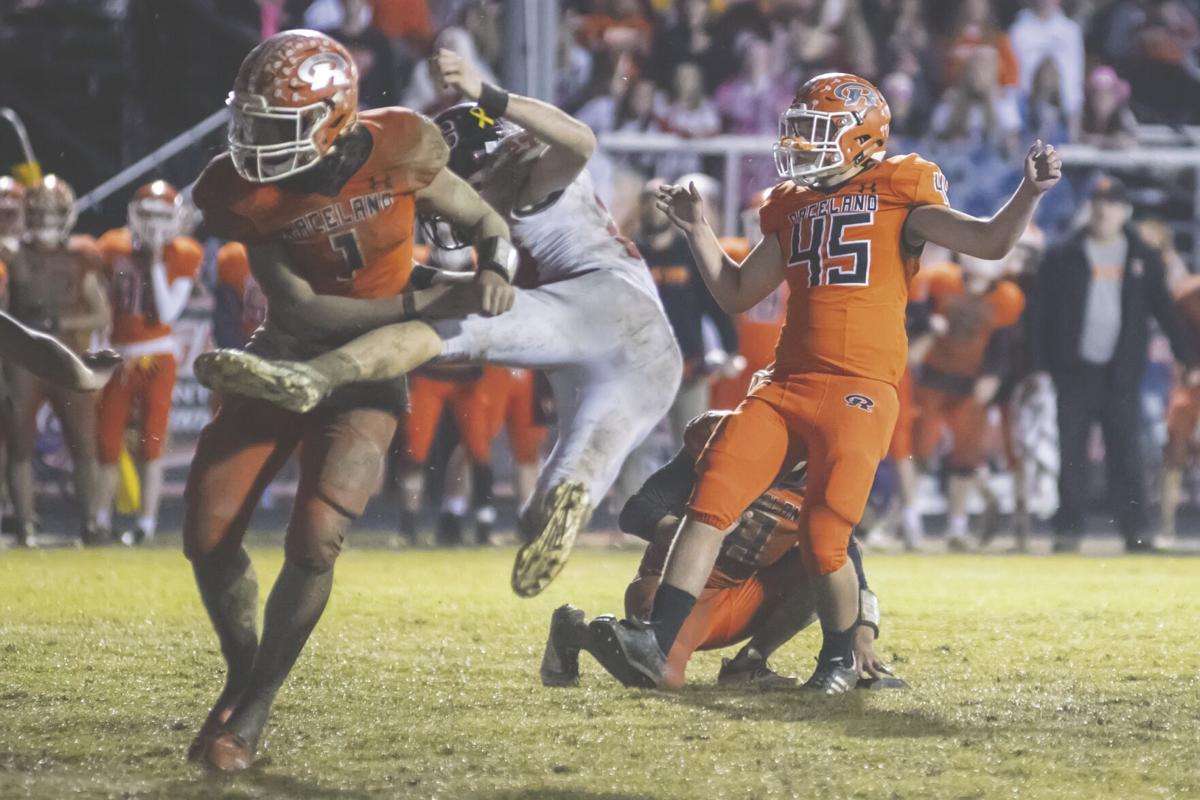 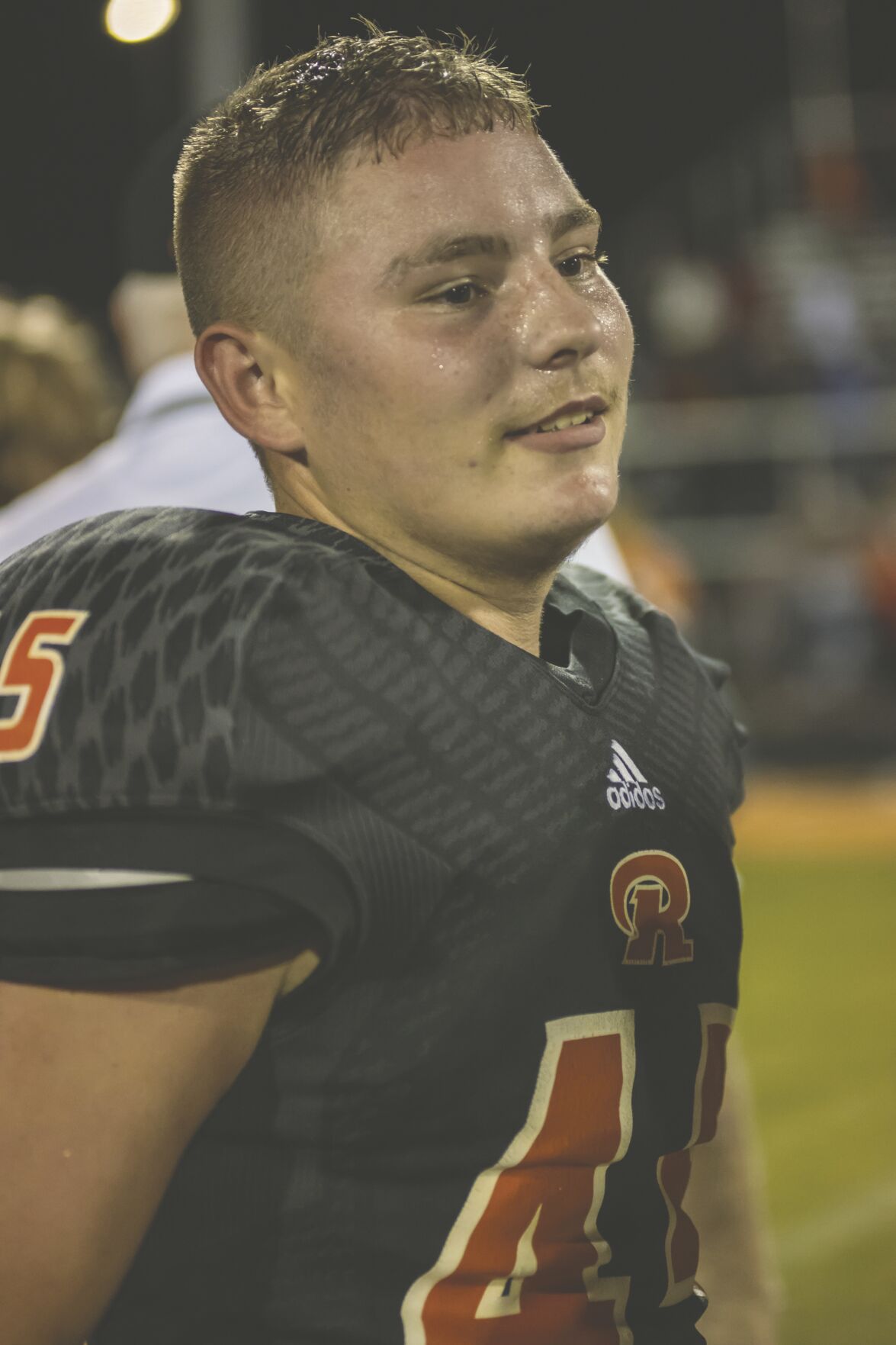 Raceland’s Peyton Ison celebrates after making a field goal in the final seconds against Paintsville on Oct. 23, 2020. 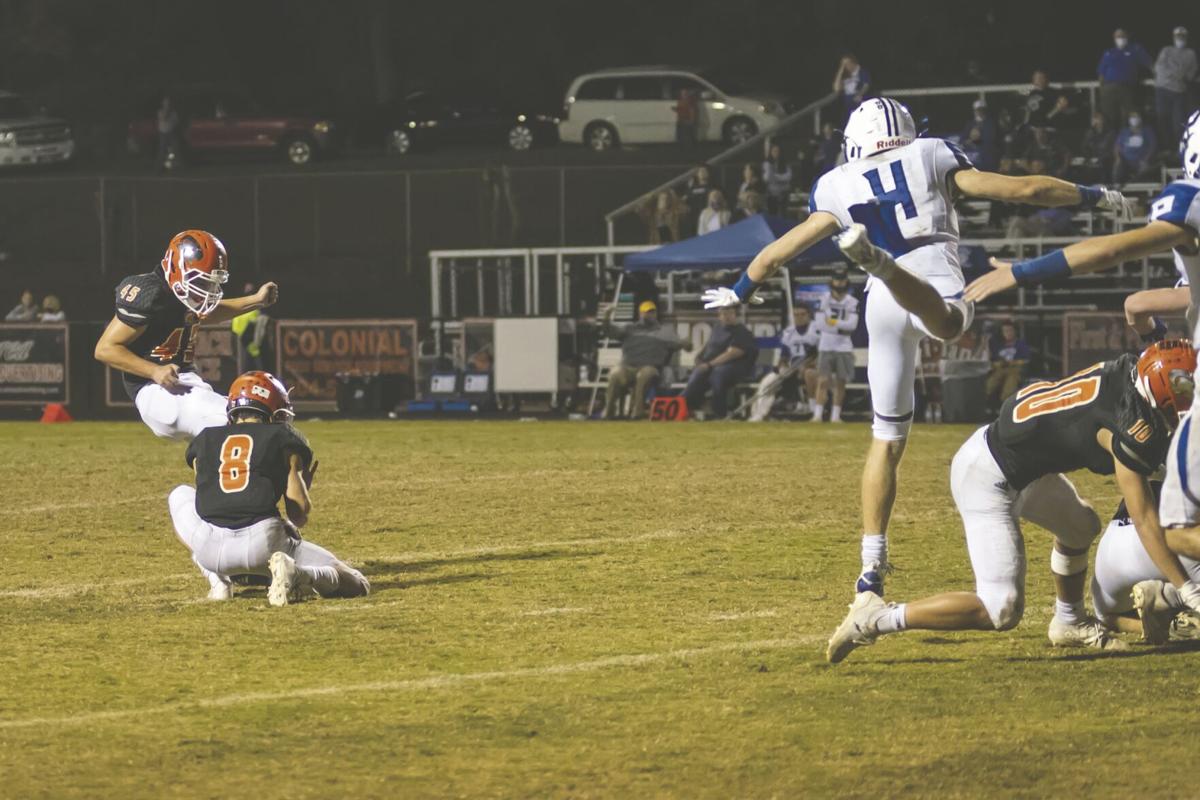 Raceland’s Peyton Ison kicks the game-winning field goal against Paintsville on Oct. 23, 2020. The boot gave the Rams the No. 1 seed in the district. 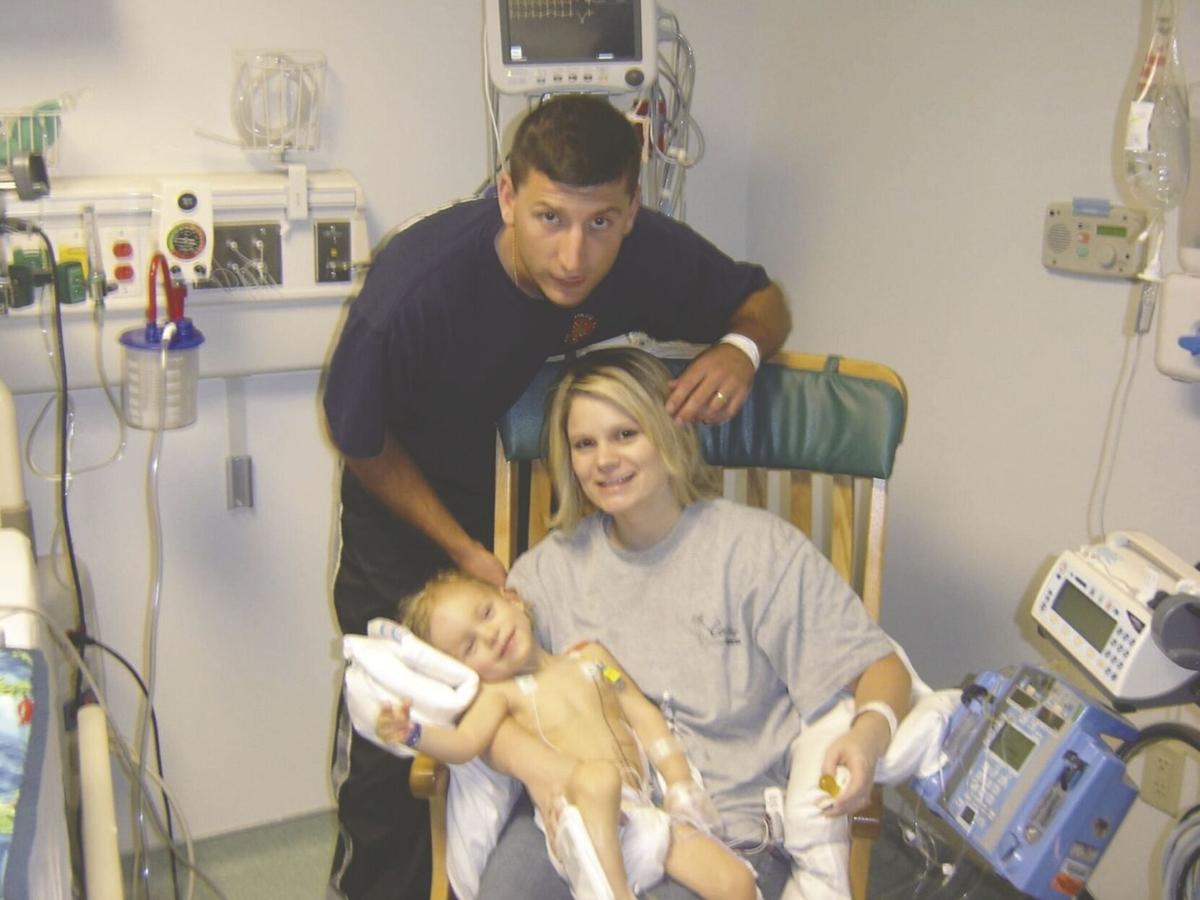 Susan Ison holds Peyton in his room at Cincinnati Children’s Hospital. Jesse and Susan Ison said their son was born with congenital heart disease and had major heart surgery before he was 3 years old.

Raceland’s Peyton Ison celebrates after making a field goal in the final seconds against Paintsville on Oct. 23, 2020.

Raceland’s Peyton Ison kicks the game-winning field goal against Paintsville on Oct. 23, 2020. The boot gave the Rams the No. 1 seed in the district.

Susan Ison holds Peyton in his room at Cincinnati Children’s Hospital. Jesse and Susan Ison said their son was born with congenital heart disease and had major heart surgery before he was 3 years old.

RACELAND Peyton Ison has orange and black in his blood. Initially, it didn’t appear his heart could pump it well enough for him to follow the family legacy of playing football at Raceland.

And, for a time, that was the least of his parents’ concern.

Born with congenital heart disease, Ison required major heart surgery just shy of age 3, said his mother, Susan. At the time, Peyton was only receiving 10% of the normal blood flow to his legs, Susan said.

Not quite a decade and a half later, those legs — specifically the right one — have been principally responsible for a pair of stirring Rams victories.

Unable from an early age to pursue football through more orthodox means, Ison poured himself into placekicking and has authored a pair of dramatic game-winning boots.

“At a young age, I didn’t even think I was gonna be able to do anything because I had the heart problem,” Ison said. “I’m just glad to be out here, to be honest with you, even if it’s kicking, standing on the sideline, cheering my team on. Whatever I can do to help the team out.”

Jesse Ison, Peyton’s father, is a captain in the Ashland Fire Department. He remembers being at the firehouse the day in 2005 that the Isons learned toddler Peyton needed immediate intervention.

“He had to have immediate open heart surgery, or we were gonna lose him,” Jesse said. “You go from having everything to almost losing the most important person in your life.”

Ison wasn’t growing at the rate he was supposed to. Digging deeper, he was diagnosed with a coarctation of the aorta and a bicuspid valve, Susan said.

That meant the main artery that carries blood from Peyton’s heart to the rest of the body was too narrow and the heart had a difficult time getting enough blood into that valve anyway, according to the Mayo Clinic. Both problems resulted in not enough blood getting to Ison’s extremities and hindered his growth.

Forget about going on to suit up for the Rams, as had his grandfather, Kenny Lacks, who was inducted into the Raceland Football Legends Hall of Fame this fall.

It wasn’t certain Ison would survive.

Surgery at Cincinnati Children’s Hospital Medical Center got Ison out of immediate danger, but he was restricted from playing football until sixth grade and he didn’t feel prepared to participate then. He got his feet wet in other sports with less physicality and less of a learning curve instead.

Lacks — Peyton’s grandfather and Susan’s father — still saw a path for Peyton onto the field.

“My dad would always tell Peyton, ‘You could always be a kicker,’” Susan said. “Peyton would practice in the yard with my dad every day.”

And following in Lacks’s footsteps was important to Ison.

“My papaw, my whole family, they played here,” Ison said, “so it means a lot to me to go out on this field and play for them every week. I’ve seen videos of all them playing. It just means a lot to be a Ram.”

Ison got good enough at that craft that he caught Raceland’s coach’s eye by happenstance.

Parker, Ison’s younger brother, was playing in a Raceland JFL game in 2018. Peyton took the field at halftime and “just kinda goofing off,” as he tells it, started kicking.

“One day I just saw him out there messing around at the JFL field,” the Rams coach said, “and I just said, ‘Hey, you oughta come kick for us.’”

After all, the Rams would soon enough need a kicker. Salmons also deduced Ison needed the Rams.

“I’m habitually doing that in the schoolhouse, trying to get this guy or that guy out to play,” Salmons said, “because I think it’s good for young people to be involved with a cause that’s bigger than themselves.”

Jesse went a step beyond that. Yes, pediatrician Dr. Ann Craig and doctors in Huntington and Cincinnati had played a role in saving Ison’s life, but ...

“Coach Salmons saved him mentally and other ways I can’t explain,” Jesse said. “Coach Salmons saw something in Peyton that no one else ever did. Peyton was always a good athlete, but he was kinda lost in sports. Coach Salmons believed in him and treated him like he was his own. That is what Peyton needed to thrive.”

Jesse also credited Raceland kickers coach Randy Vanderhoof with having a relationship with Ison akin to a father-son bond.

Ison claims the potentially game-winning kicks are the easy ones.

Makes sense. After all, he has grown perfectly accustomed to living in a world of high stakes.

He’s also backed up that bravado by coming through in the big moments for the Rams. Ison’s 34-yard field goal as time expired lifted Raceland over Paintsville, 23-20, last season. The Tigers went on to win the Class A state championship, but the Rams had their say on one October 2020 night.

Ison was called upon to do it again nearly a year later, on Oct. 29. Rams quarterback Logan Lundy scored a touchdown in overtime to tie Lawrence County. Ison booted the ensuing extra point as Raceland topped the Bulldogs, 21-20.

Ison would prefer to kick under those circumstances, he said, than less meaningful ones. And the rest of the Rams’ operation is as smooth.

“I feel like the game-winners are the easiest ones to make,” he said. “I got (holder) Conner (Hughes) and Ben (Taylor), my snapper, over here all the time kicking with me, holding with me. It’s just, 1, 2, 3, kick it through.”

“We have a lof of confidence in Peyton,” Salmons said. “He’s a big part of our strategy when it becomes late in a game or late in a half. ... Obviously his leg is not some Division I guy where he can kick it in the end zone (on kickoffs) or kick 60-yarders, but he’s very efficient for high school football. We feel very fortunate to have him.”

It isn’t lost on Salmons that both of Ison’s game-winners carried through the goalposts in the Ram Stadium north end zone. So was Luke Lemaster’s field goal to beat Pikeville in the 2017 Class A semifinals to send the Rams to their first state title game — although that was a different goalpost than Ison kicks toward today because it was torn down in celebration.

“I don’t know what’s in that north end zone,” Salmons said, grinning thoughtfully. “I don’t know if there’s something planted down there, whether (late former Rams) coach (Bill Tom) Ross or some of the old Rams smile down on us just a little bit more from the north side, but obviously it’s been good to us.”

‘All Worth it Now’

Ison’s heart isn’t constantly top of mind for him today. His ticker still gets an annual checkup, he said, and he might one day need more surgery to correct other bicuspid valves, Susan said. And doctors keep an eye on scar tissue from his first surgery.

The impact, at least on a day-to-day basis, is greater in the strength that the experience and those after it have given Ison, said his father.

“It was a scary time. But looking back, it was all worth it now,” Jesse said. “Don’t get me wrong, if I could take his place, I would, but it made Peyton so much stronger and his faith is unbelievable.”