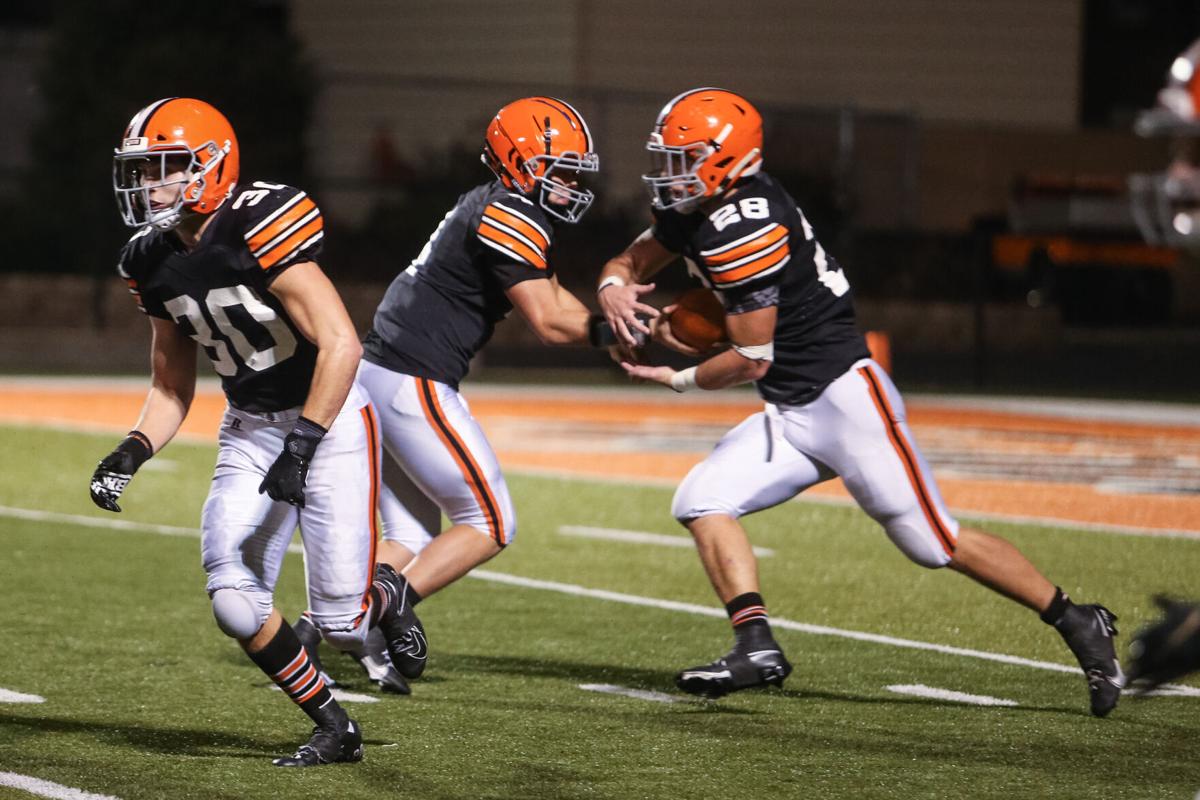 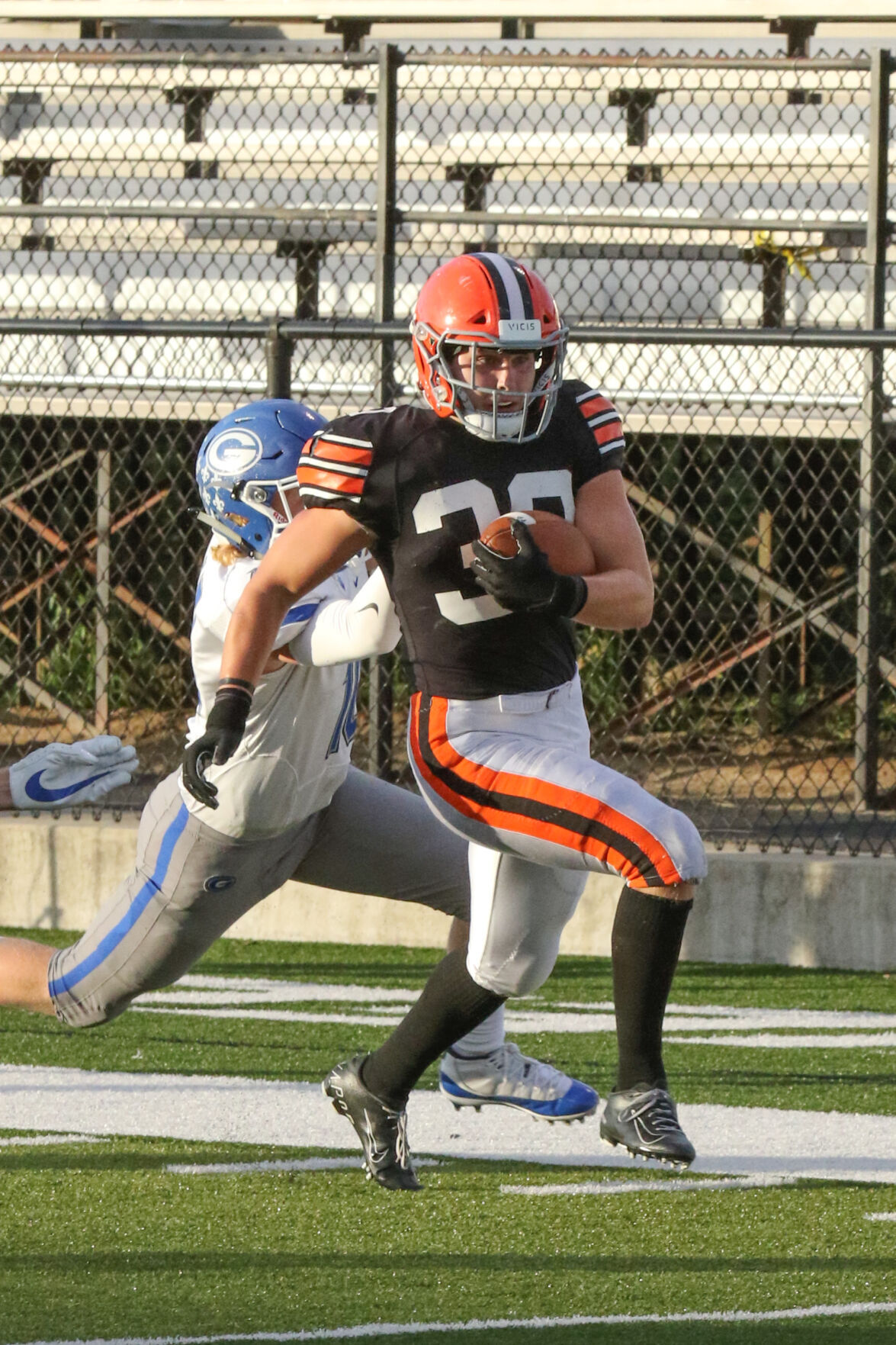 Ironton’s Cameron Deere runs down the sideline against Gallia Academy at Tanks Memorial Stadium on Sept. 5.

Ironton’s Cameron Deere runs down the sideline against Gallia Academy at Tanks Memorial Stadium on Sept. 5.

The Fighting Tigers added a 13th region title to their illustrious resume. The Spartans recorded their first region crown in school history with a 31-7 home win over Shawnee.

Roger Bacon coach Mike Blaut has been busy ever since his team’s historic victory.

“It’s been pretty exciting,” Blaut said. “Our school has a very long history. To be the first team that’s ever made it this far, it has been really nice. It took me three days to catch up on all my messages. It was from guys I played with and old friends and family. It was great to see that we have a lot of support out there.”

Blaut is a Spartans alumnus and played on the football team. It made the moment even more special.

“I’ve coached on a couple of other teams,” Blaut said. “It’s always nice to win, but don’t get me wrong, to be a part of winning (a region title) at the school I went to and the place where I grew up, that is special. My three older brothers all graduated from there. I was the youngest one coming through. It really meant more to me to get that win.”

The current Ironton team looks to cement its own place in the school’s legendary lore after winning its second consecutive region championship after two decades without one.

The Fighting Tigers are not looking forward and have their attention firmly on Roger Bacon, coach Trevon Pendleton said, when the two teams meet in a state semifinal showdown tonight at London High School’s Bowlus Field just outside Columbus.

Both teams enter the contest with sterling 10-0 records. Ironton has outscored its opponents 437-61 this year and allowed a total of 24 points in the postseason.

The Fighting Tigers rose to the challenge against their last two competitors. Ironton finished with an impressive second half to dispatch Ridgewood, 17-7, at Tanks Memorial Stadium after being tied at halftime in the region final.

“It showed they can handle adversity,” Pendleton said about the last two weeks. “You never know the true test of your team until they face a little bit of adversity. The past few weeks have given us an opportunity to handle that and our kids are did a great job.”

“Everything we do in our program revolves around finishing,” he added, “whether it’s a drill, in practice, or even a game. It was our message at halftime. The players responded.”

Blaut is in his sixth season at the helm of the Spartans program. Roger Bacon accumulated 14 wins in his first four seasons but has gone 20-2 in the last two campaigns. The coach attributes the recent success to leadership and a strong senior class.

“Last year’s seniors are guys that really got us over the hump,” Blaut said. “We haven’t been good for a number of years. We had seven or eight of those guys go off to college to play. One of them is playing for Wisconsin. Obviously, those type players are going to make a team better. This year’s senior class picked up right where those guys left off. … We have been blessed to have some really good players here lately.”

Spartans running back Corey Kiner fits into that category. The senior has verbally committed to LSU and surpassed 7,000 career rushing yards with a 142-yard two-touchdown performance last week. He has tallied 29 TDs this season.

“He’s just a kid that can do it all,” Blaut said. “He’s got all the tools in the toolbox that a running back needs. He’s fast and he’s strong. He has got great balance and great vision. He can make plays where you didn’t think a play was there.”

“My quarterback is playing really well,” Blaut said. “I have four skill guys that are dangerous in any part of the field. We’ve got two wideouts, Kyle Guyer and Jake Tschida, that can flat-out run. My tight end can take away a lot of pressure in the middle of the field. Danny is our utility knife. He can do a lot of different things.”

The Ironton defense will attempt to limit the Spartans’ big play potential.

“Their running back is a super-talented kid,” Pendleton said of Kiner. “He’s one of the best in the nation at his position. He’s not the only threat they have. Their quarterback is a very capable passer. They have great receivers. We want to make them earn the yards they get and take advantage of our opportunities.”

The Tigers have plenty of firepower to match. Ironton’s stout defense is led by linebackers Dalton Crabtree, Reid Carrico and Cameron Deere. Carrico has amassed 48 tackles and rushed for 1,276 yards and 21 touchdowns.

“They are 10-0 for a reason,” Blaut said of Ironton. “They have a great history. We’ve seen them on film. They look a lot like us. We do a lot of similar things on offense and defense. They’re a really good team but we think we’re a pretty good team, too. I think it’s going to be a great matchup.”

Blaut doesn’t expect the school’s first appearance in the Final Four to be overwhelming. The Spartans, who moved down to Division V this season, are not changing their normal routine this week.

“Our motto has always been let’s stay ready, so we don’t have to get ready,” Blaut said. “We are doing the same thing this week that we did last week and every other week before. We don’t change anything, and we don’t make it seem like it’s a bigger game than it normally is. Our kids are bought into that.”

The Spartans have been quick starters this season. Roger Bacon had scored at least 13 points in every first quarter this year until last week, according to the Cincinnati Enquirer. Ironton is prepared to equal that early energy.

“We have talked about how they are going to come out and play hard,” Pendleton said. “They will be very hungry to get that first opportunity. Our kids are also hungry. They will come out and match that intensity. It will be a fun game.”

Ironton hopes its visit to London tonight will be the first of two trips to the Columbus area. The Fighting Tigers have to complete one last step to reach consecutive state final games.

“Any time you are playing for championships, they are big whether it’s region or state,” Pendleton said. “It’s a big opportunity for us. We make no bones about it. Our ultimate goal is to win state championships. It’s been that way since Day 1 and our kids keep pushing forward to that goal.”