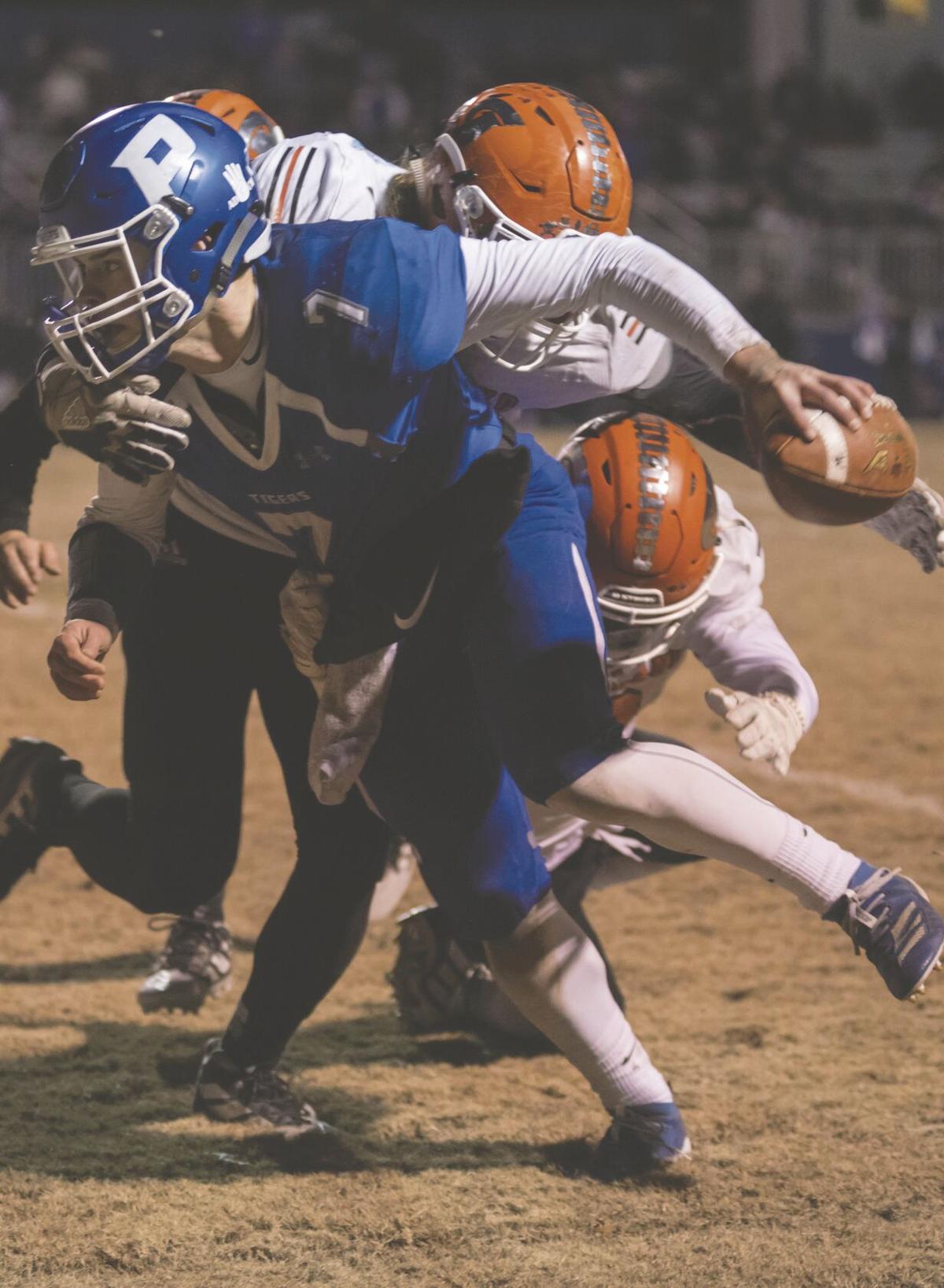 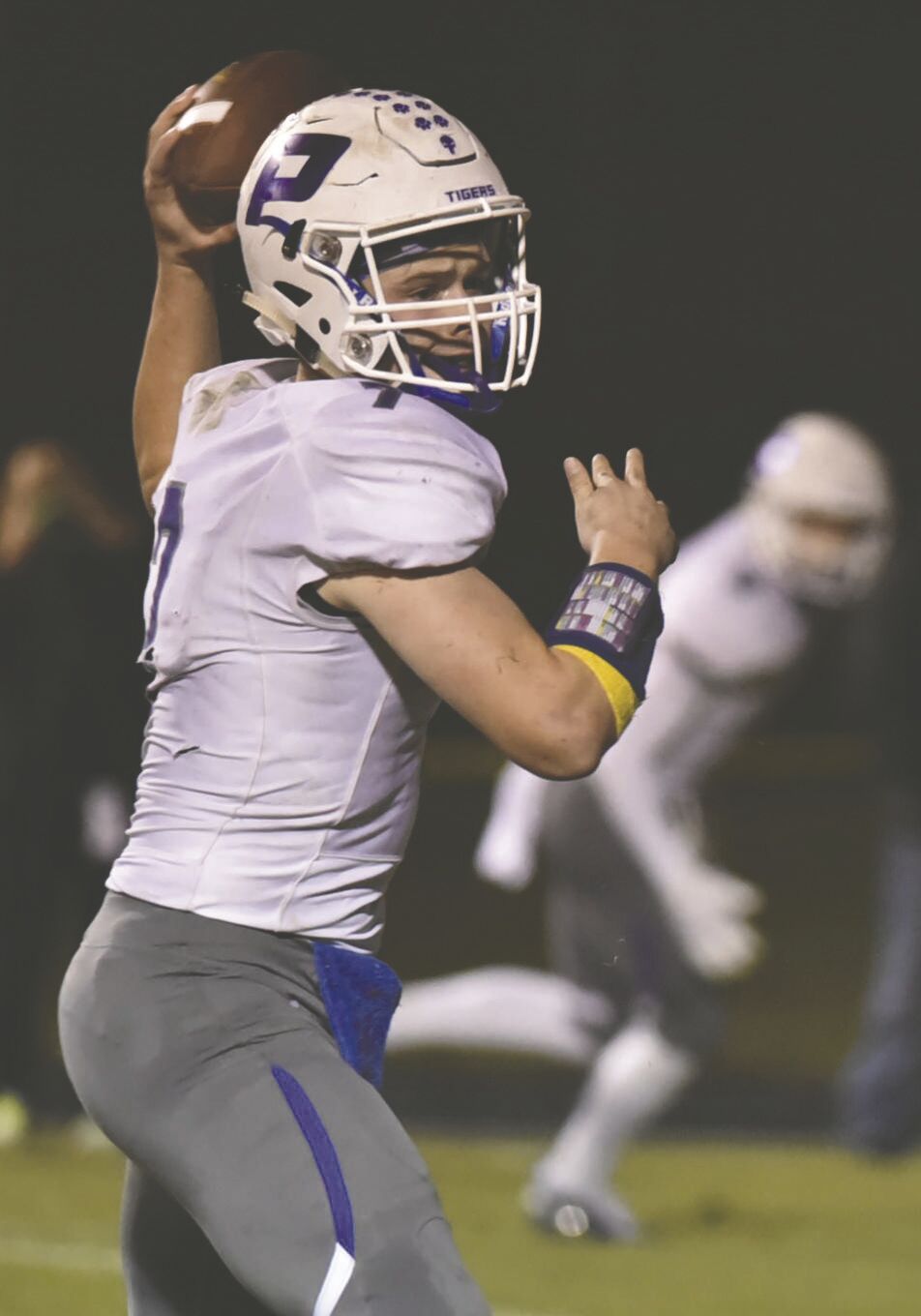 Paintsville's Jake Hyden attempts a pass against Raceland in 2018.

Paintsville's Jake Hyden attempts a pass against Raceland in 2018.

PAINTSVILLE Jake Hyden didn’t need to say a word. The quarterback’s determined play on the field was doing the talking for him.

The Paintsville senior is entering his fourth season under center, and after leading the Tigers to 32 victories and a state final appearance, he is now the talk of the town.

Hyden said the group of teammates around him has been the Tigers’ key to success.

“I have changed so much as a leader,” Hyden said. “My freshman year, I was almost scared to talk to the team. This year, I've grown so much as a leader and as a person. So many players have stepped up to help lead the team and push us to be the best that we could be.”

That victory total also includes eight wins in the postseason and the opportunity to play at Kroger Field last year. The outcome in the Class A championship against rival Pikeville did not go the Tigers‘ way.

As he walked off the field that day, Hyden would do everything he could to get the team back there this season.

“Obviously, it hurt a lot,” Hyden said. “Everybody, especially our seniors, worked so hard, but it just wasn’t enough. It showed us that we had to improve and work even harder this year.”

Tigers coach Joe Chirico said that everybody knows how hard Hyden will fight every snap.

“Jake is a competitor,” Chirico said. “He's always going to give you everything he's got. He's been a steady leader for our team every year he's been here. He's always going to work hard no matter what he's doing whether it’s baseball, football or studying.”

Hyden started playing quarterback in junior high and quickly developed a comfort level at the position. The support and encouragement he receives from the community and his teammates provide extra motivation for him on Friday nights.

“My family has supported me through every bit of this,” Hyden said. “This town supports me. The coaches and teammates support me. I just get support everywhere I look.”

Hyden has thrown for 4,239 passing yards and 46 touchdowns in his first three seasons. He has accumulated 1,556 rushing yards and tallied an additional 21 TDs. Hyden was the leading ground gainer for his team as a sophomore.

Hyden believes the Tigers have what it takes to get back to Lexington in December.

“We know we have the potential to be in that same spot again this year,” Hyden said. “You have to work harder, get faster and get stronger. Now we know what we have to do to get back on (Kroger) Field. It was an unbelievable experience, other than the outcome. It was amazing playing on a field like that. It's something that people dream of experiencing.”

The Tigers’ small roster stepped up in big moments during the playoffs. Paintsville earned thrilling wins over Raceland and Williamsburg in front of the home crowd, then dispatched previously unbeaten Kentucky County Day on the road.

“It was very special,” Hyden said. “We didn't have a very big team last year, maybe 23 players on the roster. Every single person on our team had to fight for every single win that we got. It was an amazing experience to keep winning games until we finally made it to Kroger Field.”

Chirico said Hyden’s vision and ability to read defenses have greatly improved. His demeanor and command of the offense has been a key of his development.

“The quarterback has to be your rock,” Chirico said. “He has to be the guy that doesn't get too up or too down, too mad or too sad. He has to be steady on the field. That is what Jake is. He is always even-keeled. He keeps his mind and head about him.”

Hyden tossed 13 touchdowns to just four picks in his freshman season. Heading into his final campaign, the speed of the game is not an issue anymore and his confidence level keeps rising.

“It was very nerve-wracking early on,” Hyden said. “Throughout the years, the game has slowed down so much. It’s gotten a lot easier to visualize everything. My freshman year, I was a nervous wreck. It was hard to take every bit of that in, but it was awesome at the same time.”

The experience will come in handy as Paintsville faces six road games during the abbreviated 2020 season. He enjoys playing in front of the home fans at Memorial Field but relishes the chance to show his mettle when the scenery changes.

“It's going to be different,” Hyden said. “I feel like it's more exciting playing on the road. You have all those fans screaming at you and some fans booing you. It's a great feeling to play on the road. Memorial Field is a great home environment. Our fans are loyal and they're always here supporting us no matter what.”